Our original plan was to scope out the Colca Canyon before heading to the colonial town of Arequipa.  I’m going to be completely honest with you.  Don’t get me wrong, we enjoy dirt road driving.  But the drive from Cusco towards the Colca Canyon turnoff just felt like it took forever, so instead of making the turn we continued on towards Arequipa.  I think there is something about driving on freshly paved roads that alternate with dirt washboard… it tests your patience.  “All dirt or all paved!” we exclaimed, shaking our fists at the tarmac.  That and some days we’re just grumpy.  Maybe we didn’t have enough snacks that day.  It happens.

Anyway, we crawled our way over the 16,000 foot Patapampa Pass taking in the vast emptiness around us. 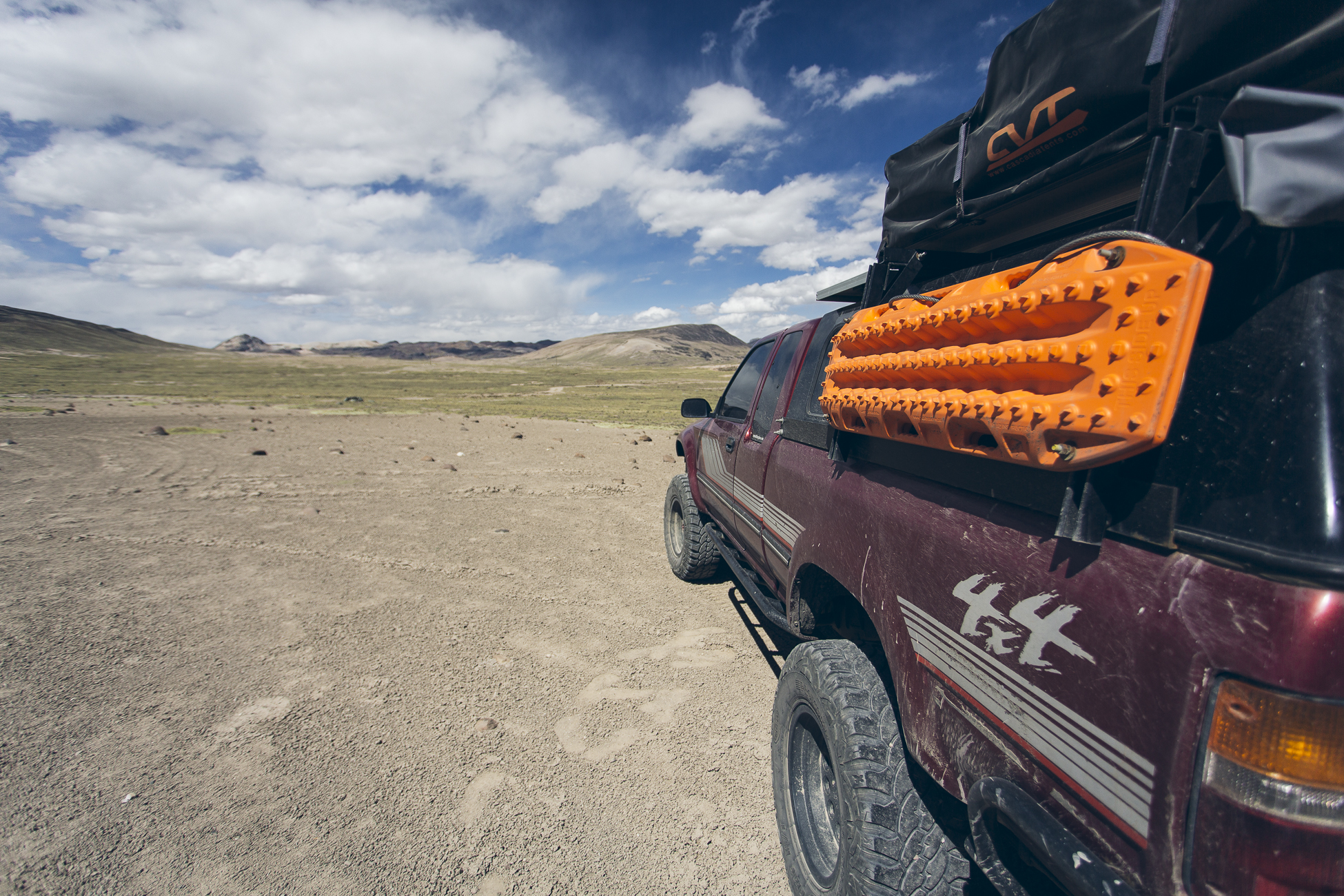 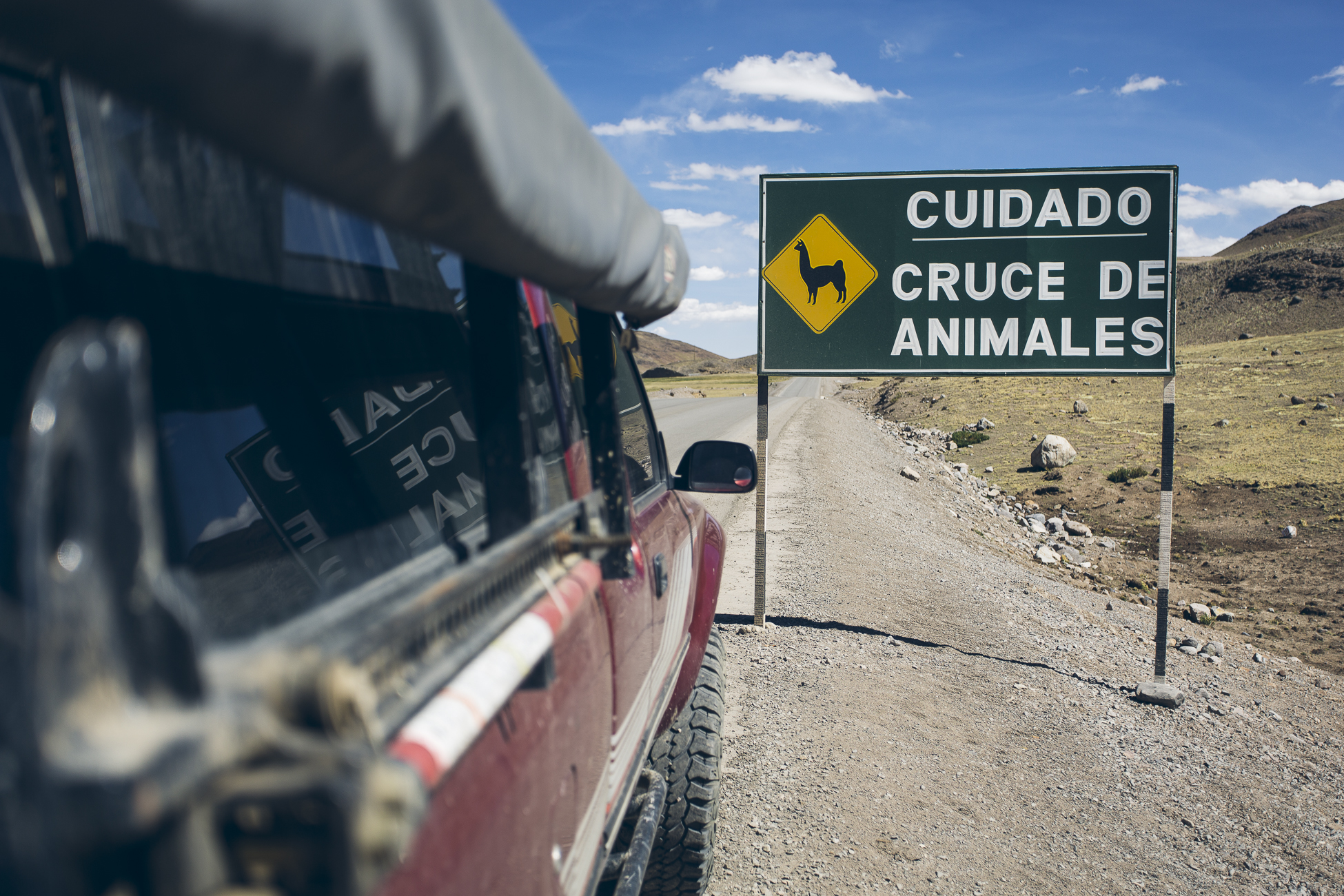 We arrived in Arequipa, Peru’s second largest city, completely exhausted and fried. Long driving days tend to do that to us.  We moved like zombies to the supermarket nearby, walking quickly through the urine-smelling underpass tagged with graffiti.  Pretty sure we ate root vegetable chips for dinner that night and faceplanted into the tent, more than ready for a good night’s slumber. 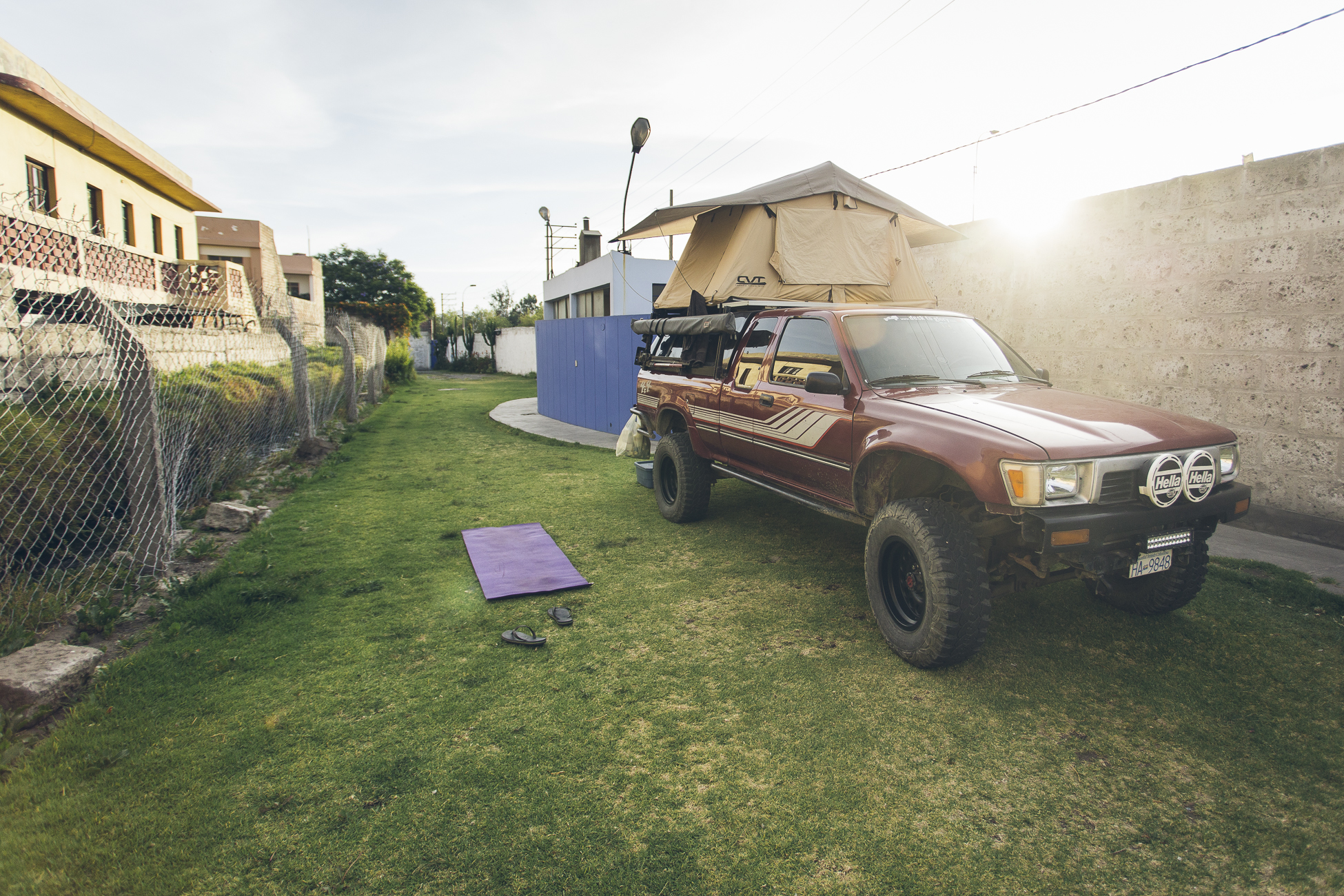 The next day we pounded the pavement with a list of stuff to see in the historical section of town.  Similar to Popoyan in Colombia, this UNESCO Heritage Site is filled with colonial style white-painted buildings.  Palm trees dotted the central plaza, while multiple dusty ice-topped volcanoes surrounded the outskirts of town.  The air felt much drier than Cusco due to its desert climate (300 days of sun per year!). 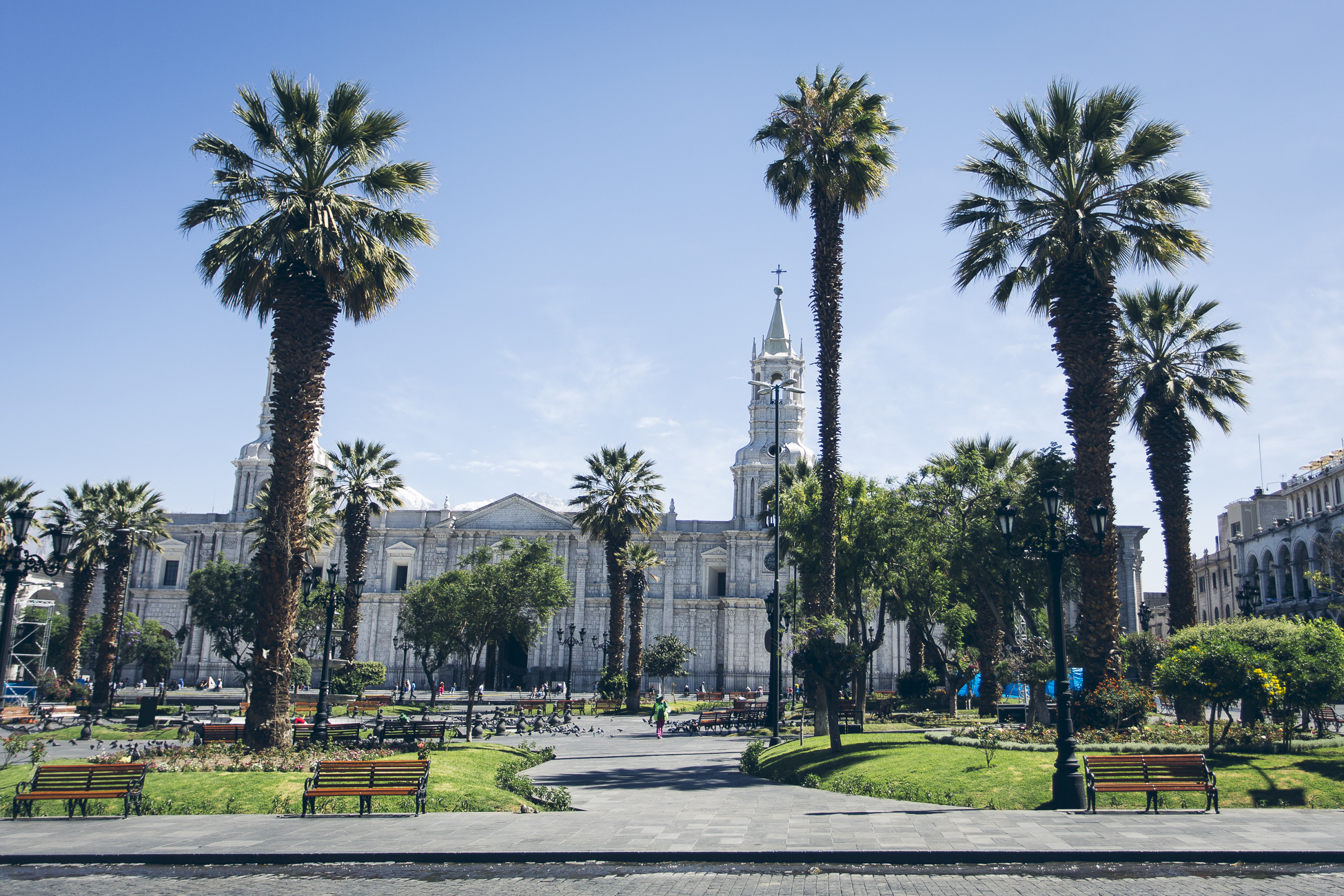 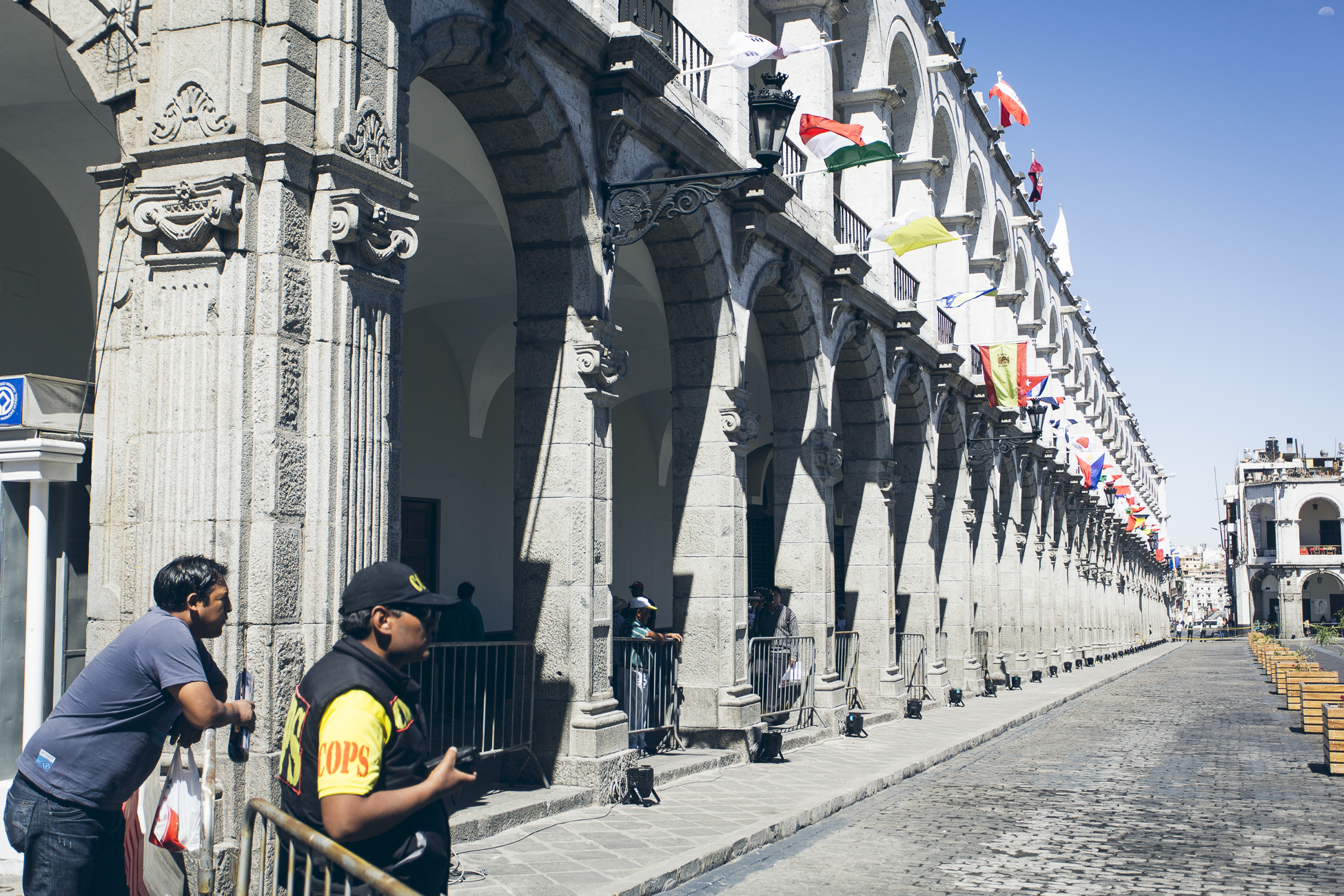 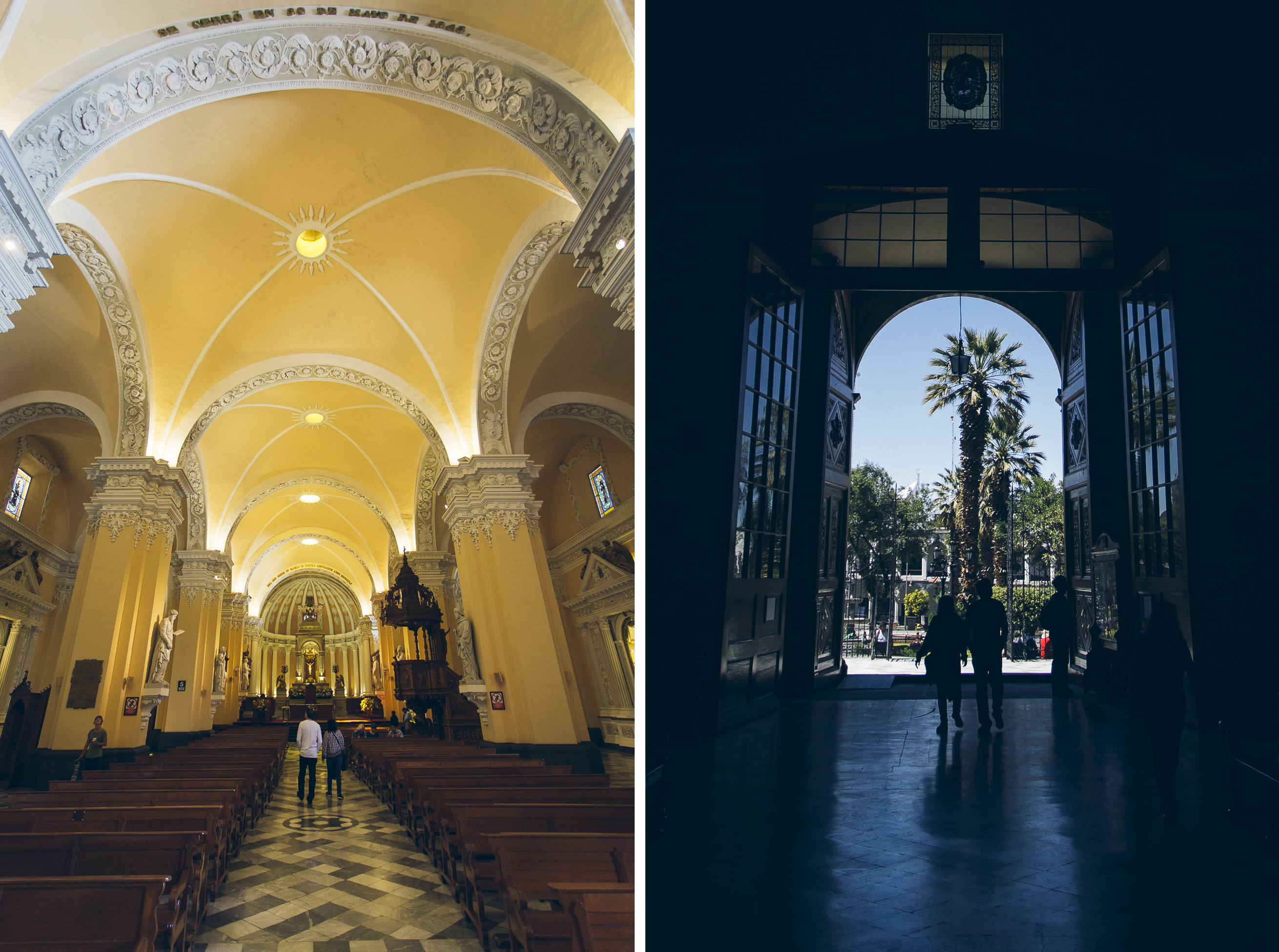 We tried a good variety of cuisine in Arequipa, including middle eastern food at Cafe Fez-Istanbul, crepes and lucuma ice cream at Crepisimo, and delicious local potato dishes at Hatunpa. 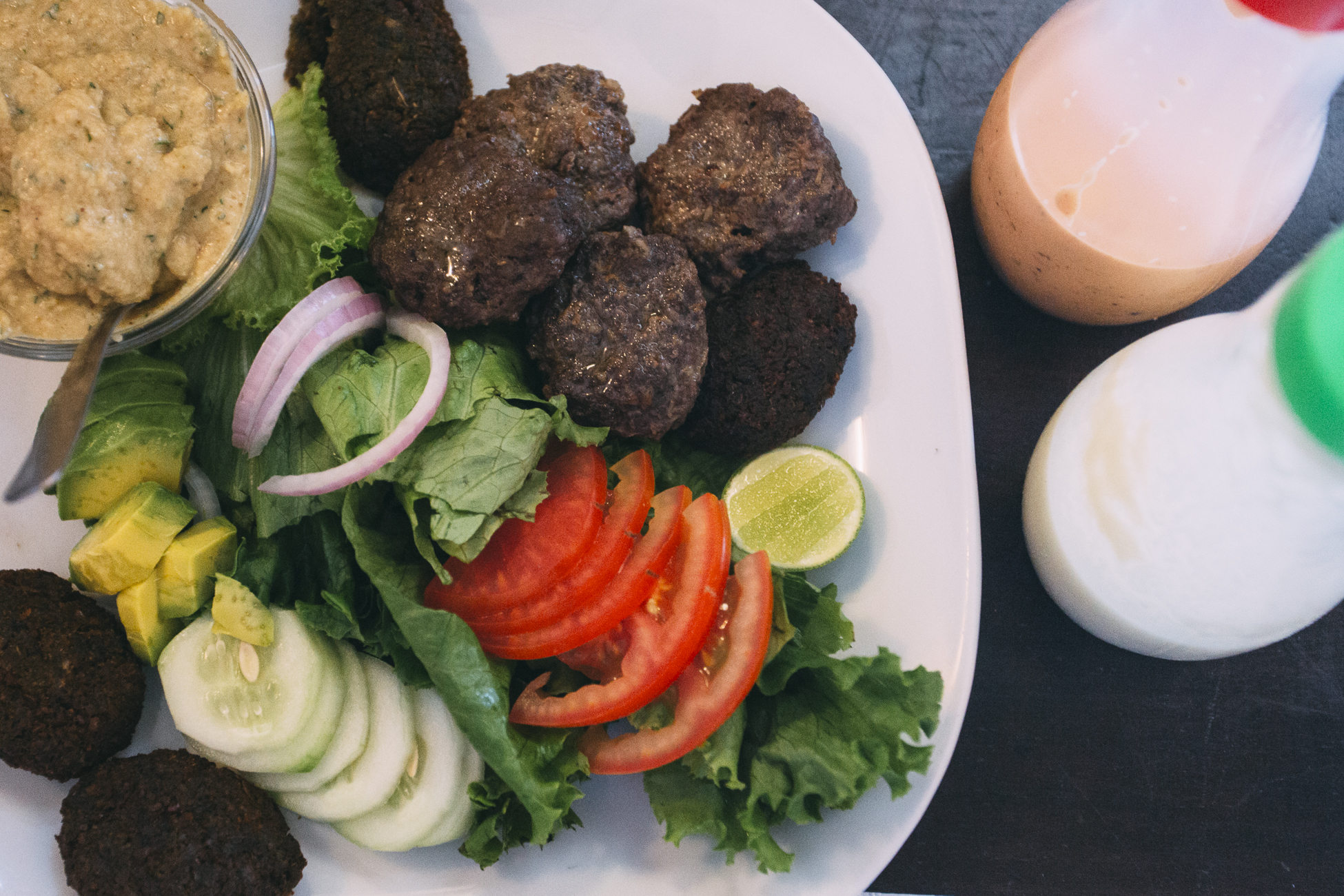 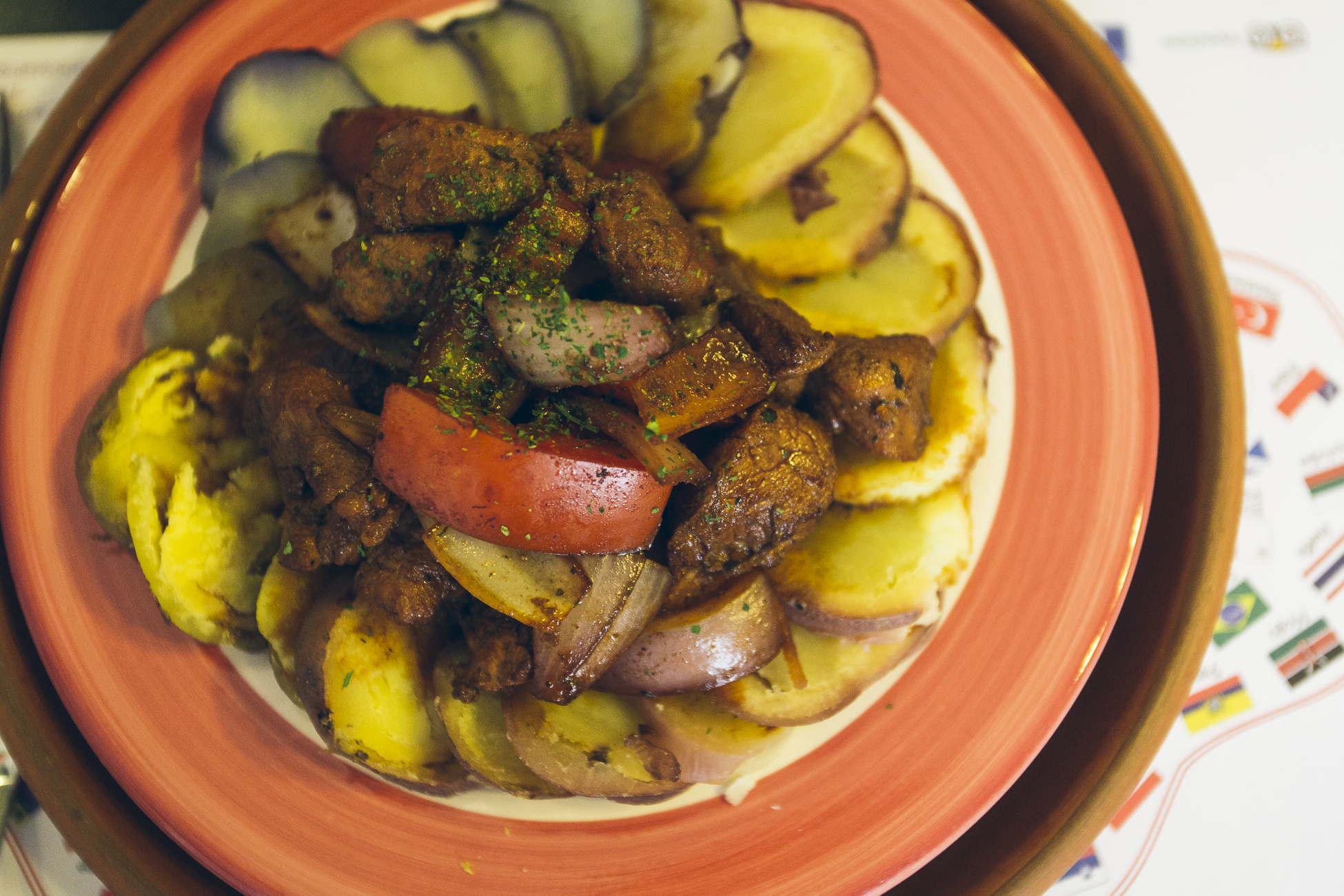 Outside the historic section, the city had a bit of a sketchy feel to it.  Our suspicions were confirmed when we later ran into our friends Chris and Mallary, as well as a French couple, both of whom had their vehicles’ back side windows smashed in, thieves grabbing whatever they could in a matter of minutes.  There were a couple of highlights in the historic section of Arequipa though, the first being the Santa Catalina Monastery.

This fully functioning Monastery spans 20,000 square metres or the size of a large city block.  It was built in 1579 and founded by a wealthy young widow.  The high stone walls are quite beautiful, painted mediterranean blue and terra cotta orange.  They were constructed with sillar (white volcanic rock) and ashlar (petrified volcanic ash) sourced from nearby volcanoes.  Unfortunately sillar is quite porous, resulting in deterioration over time.  Restoration work has kept the monastery in fairly good shape despite damage done by several earthquakes in the past.

We followed our paper map, exploring numerous private cloisters, kitchens, a laundry area, dining room, garden, common areas and an art museum.  It was fascinating to take in the details of the place: narrow alleyways, stone floors, dark hued paintings with gold frames, layered brick ceilings, kitchens black with soot, metal cookie cutters, white porcelain chamber pots, and skylights carved into the ceilings.  This article gives a good overview of the history of the convent if you would like to learn more. 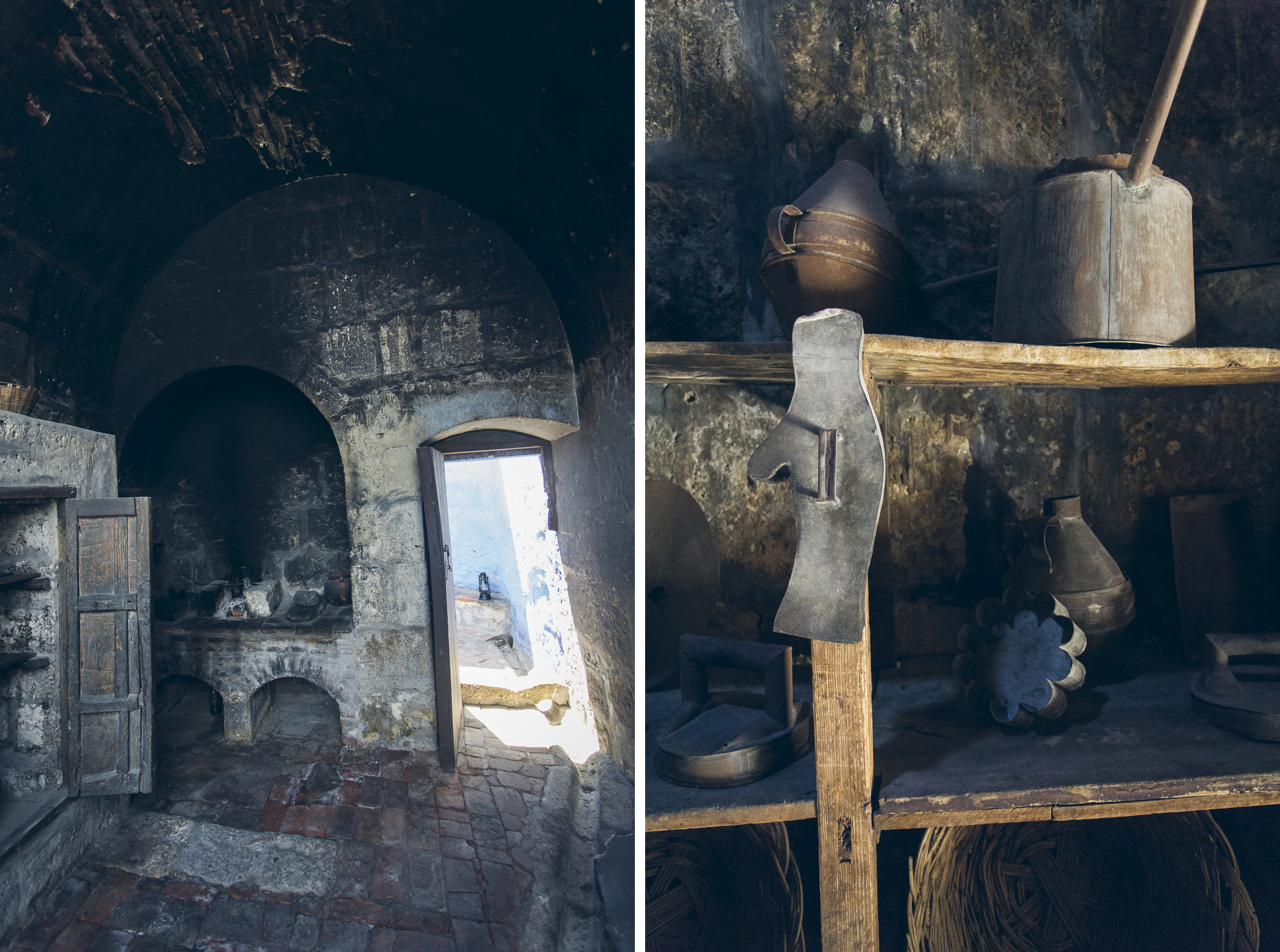 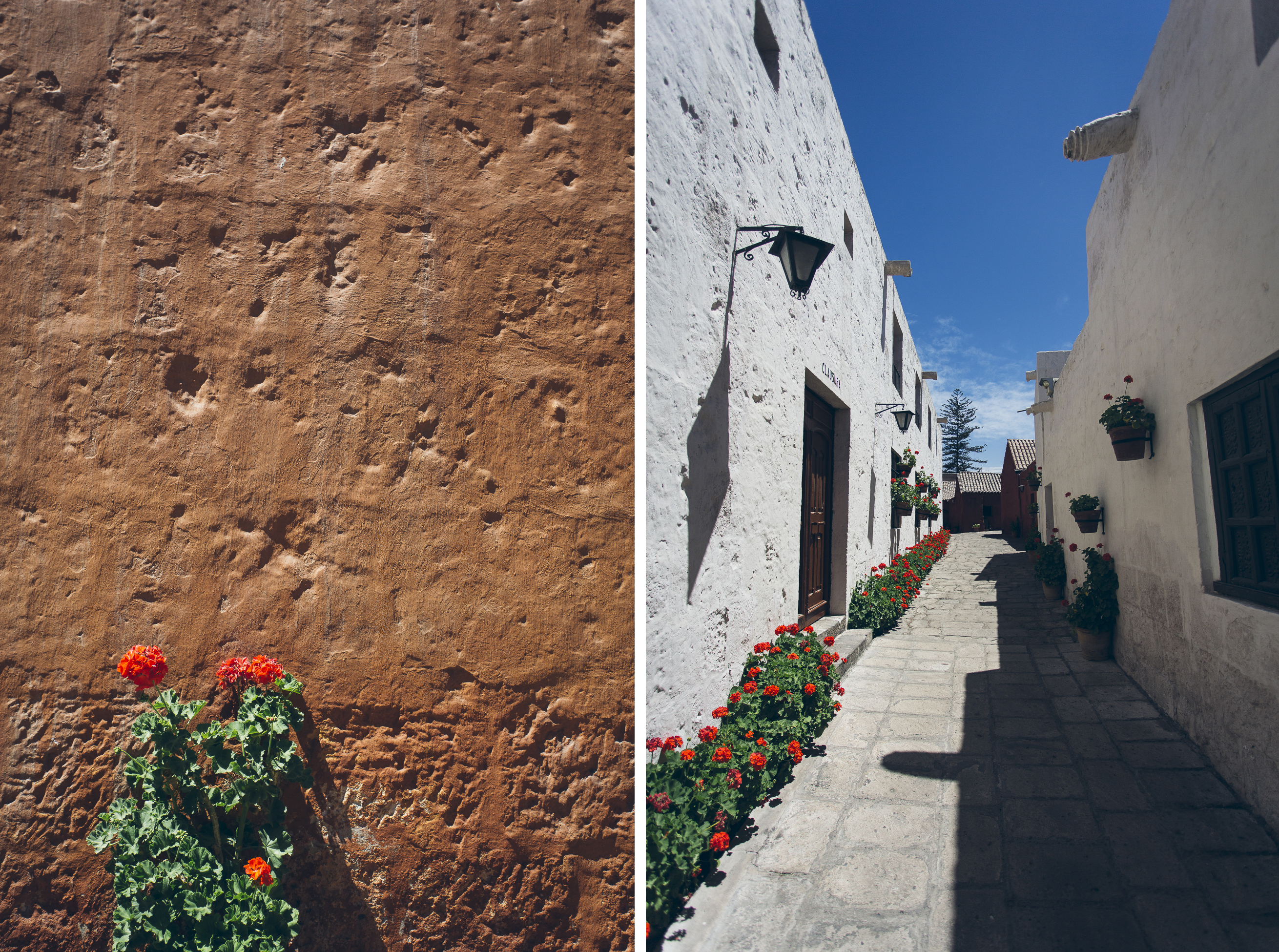 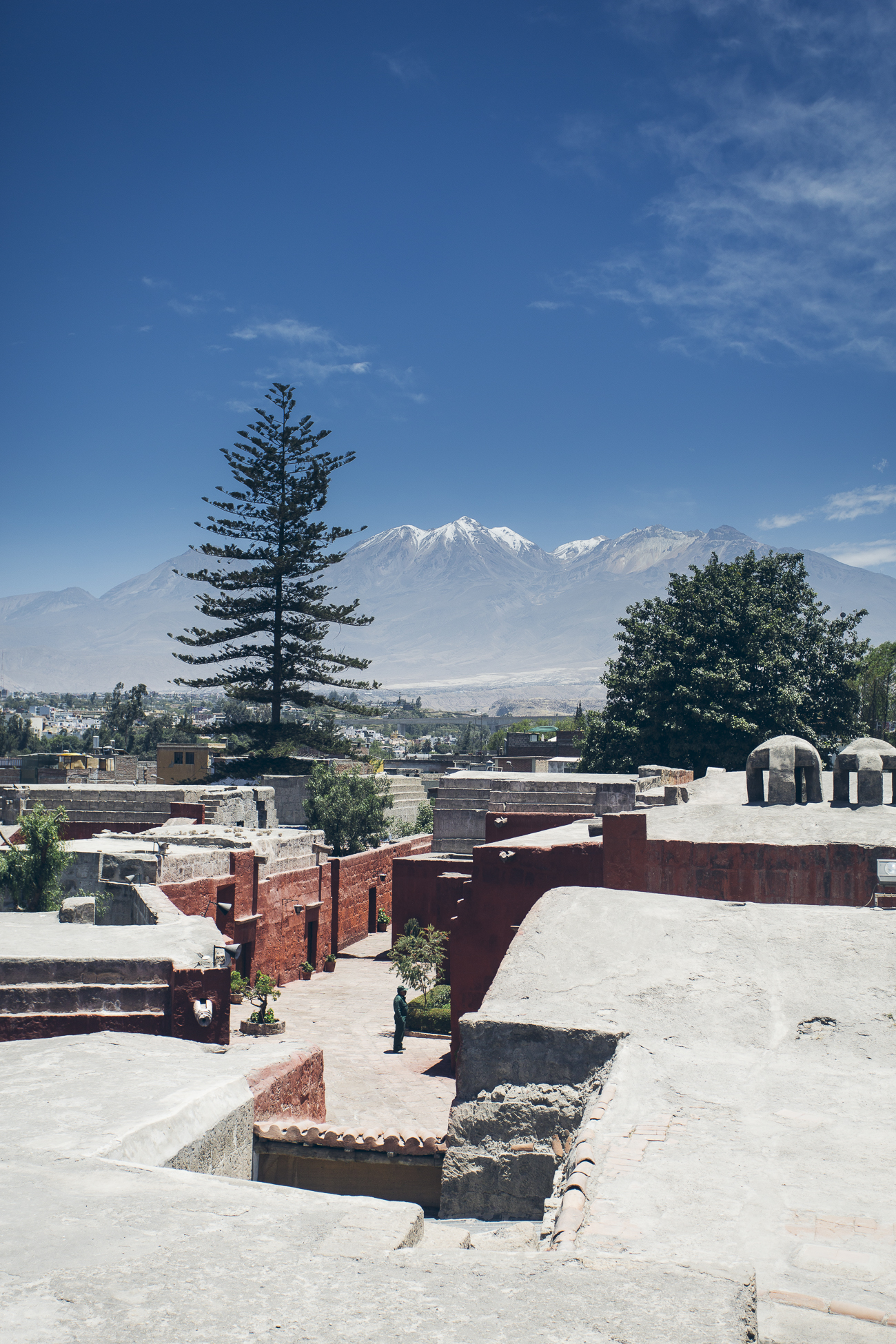 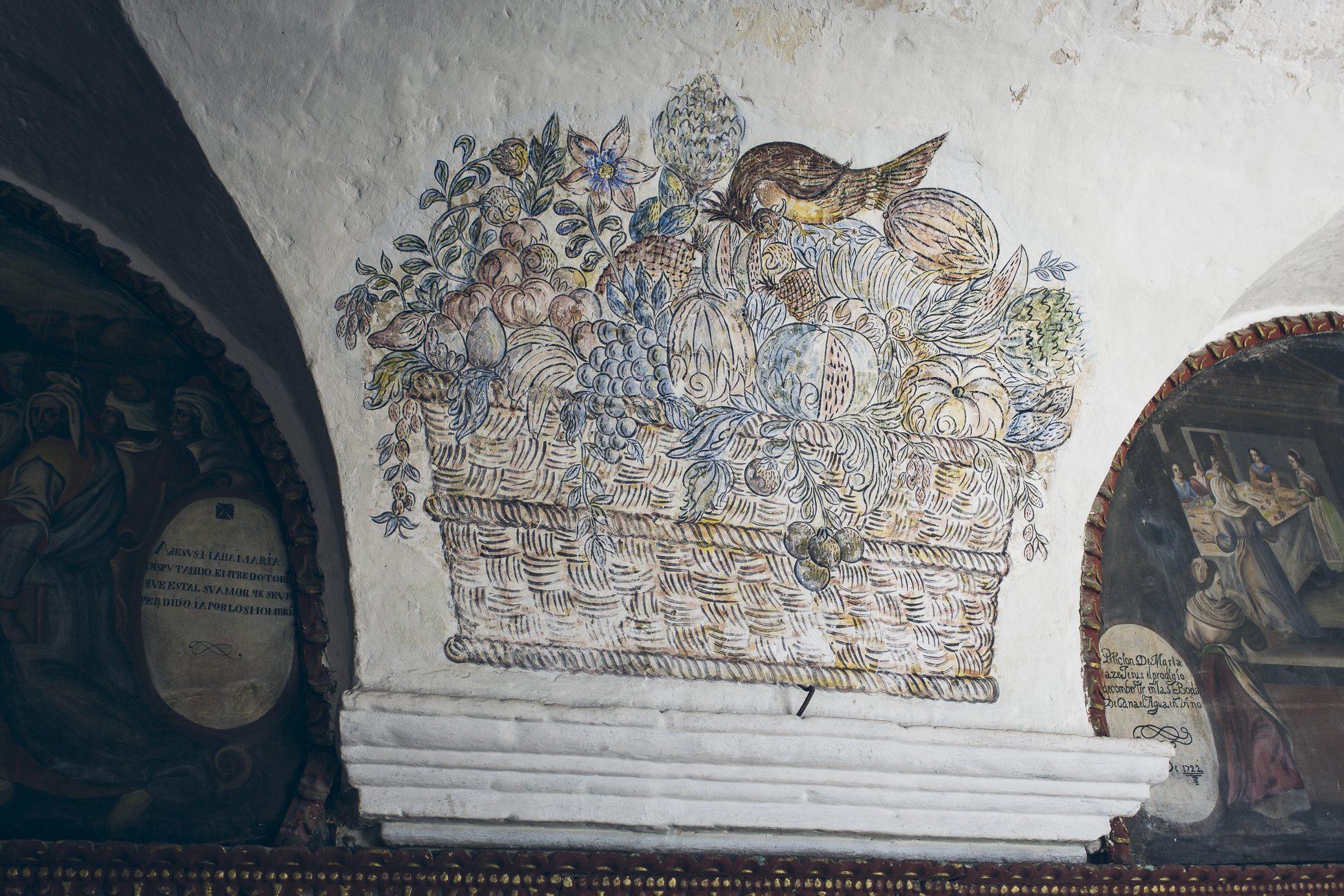 The second highlight for us in Arequipa was hanging out with Juanita the Ice Maiden.

We paid a visit to the Museo Santuarios de Altura where we watched a National Geographic video explaining (via re-enactment) how she succumbed to her fate and how she was eventually discovered.

Sometime between 1450 and 1480 a young Inca girl was killed on Mount Ampato as an offering to the mountain gods.  She was dressed in fine textiles made from alpaca wool and buried with various items such as bowls, pins, and figurines made of gold, silver and shell.

Fast forward to 1995.  While ascending Mount Ampato, Anthropologist Johan Reinhard and his Peruvian climbing partner discovered a frozen bundle at 20,000 feet, inside of which laid Juanita’s small body.  She was unique in that her DNA (a.k.a. internal organs, hair, stomach matter) had been completely preserved.  Due to this excellent preservation, scientists discovered where she likely originated from (Cusco area), what she ate (vegetable matter, 6 to 8 hours before her death), and how she was killed (blunt trauma to the skull). 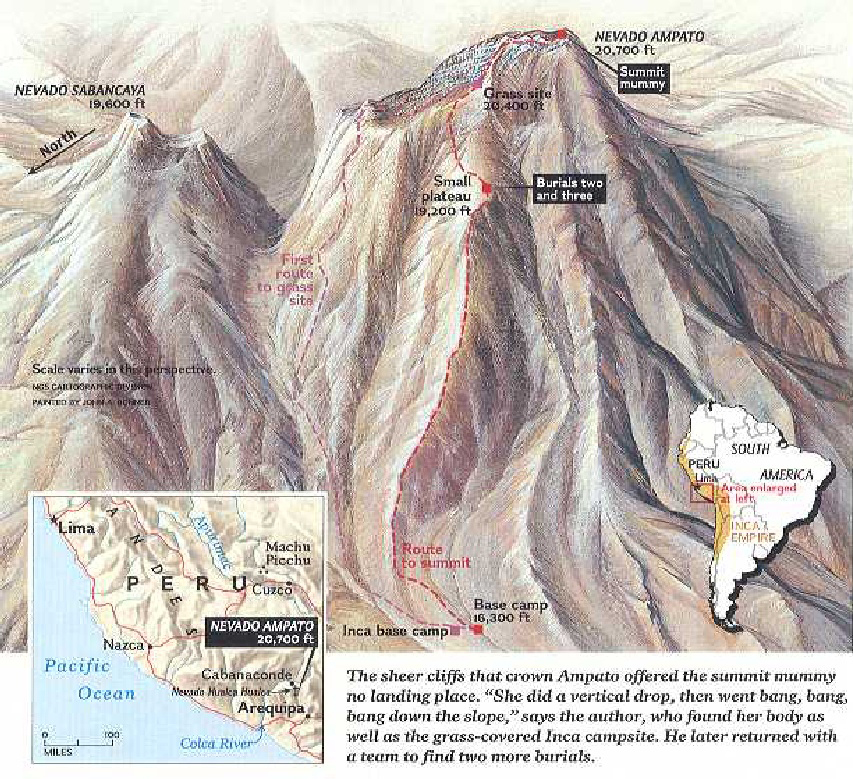 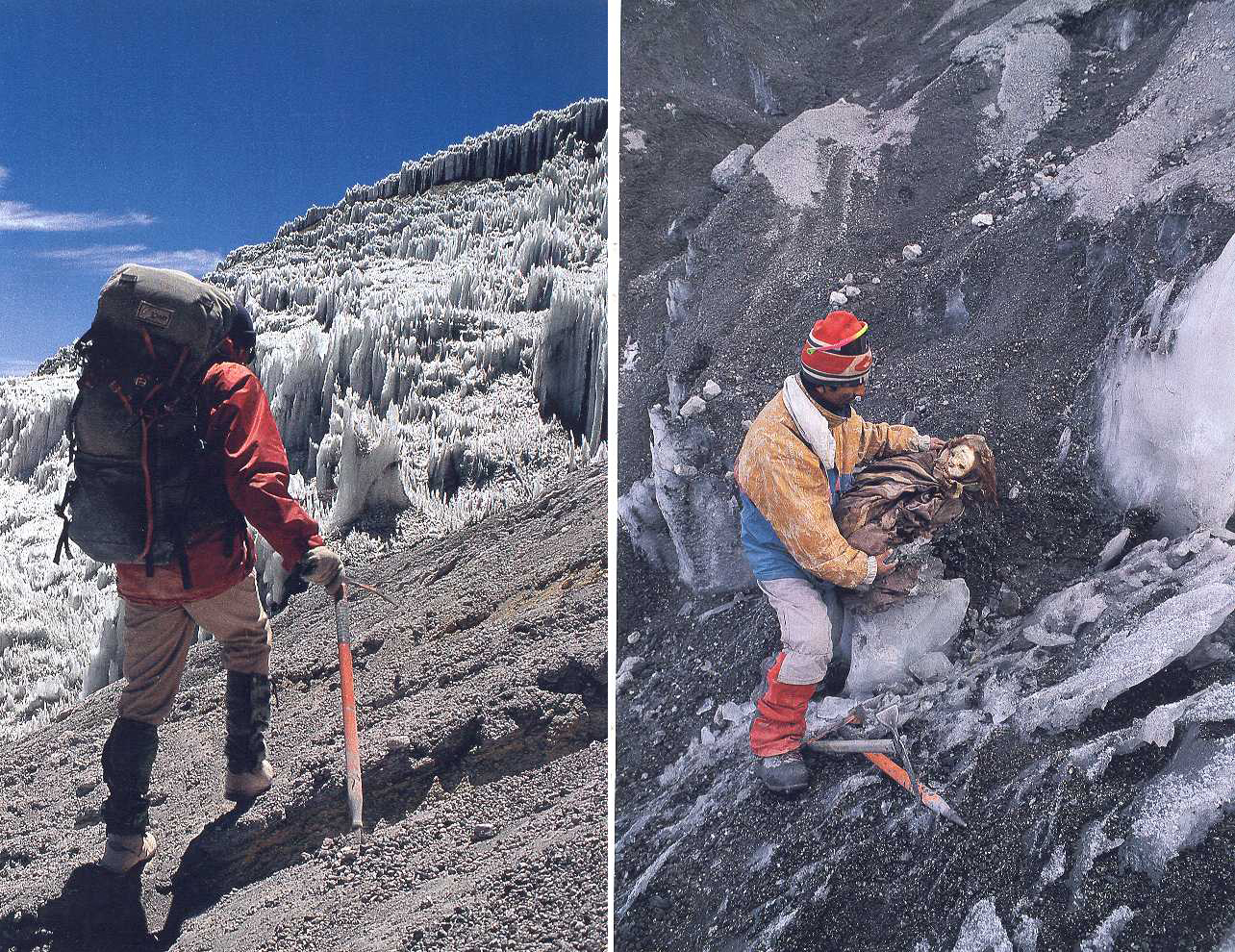 After the film we stepped into the air conditioned, dimly lit museum for a glimpse at the various items Mr. Reinhard discovered in 1995.  Gold llama figurines, items of clothing, blankets, other knick knacks.  Finally, we pushed aside a large black curtain and headed toward a small glass case at the back of the room.  No photographs allowed.  A dozen ice crystals huddled in the corners of the glass box in which Juanita the Ice Maiden now resides.  Wow.  It was such an incredible experience to see a 500 year old person frozen in time. 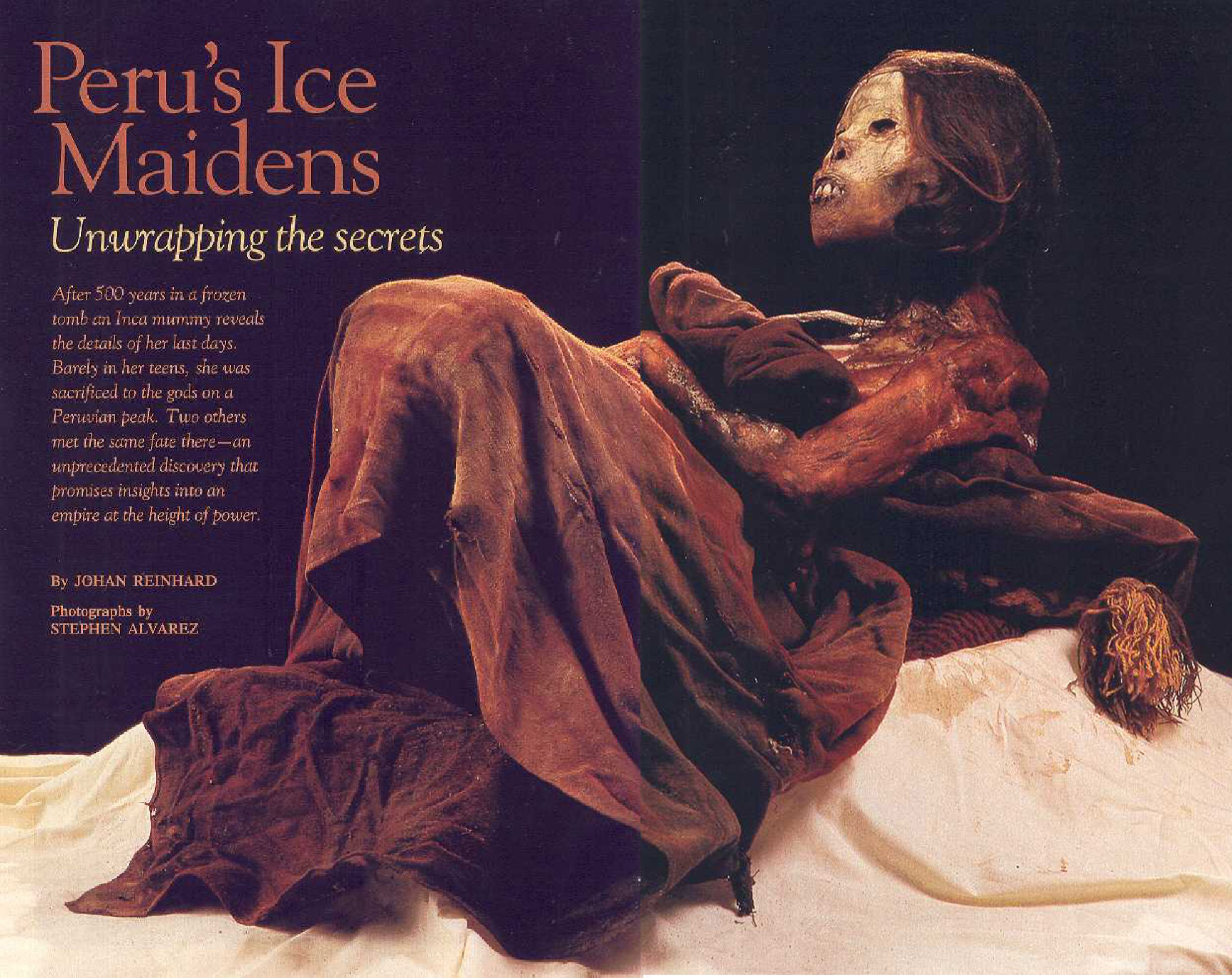 We only spent a couple of days in Arequipa, antsy to get moving towards Bolivia.  We heard that the Bolivian rainy season would be starting soon so we high-tailed it towards the Peru/Bolivian border, ready to explore our thirteenth country. 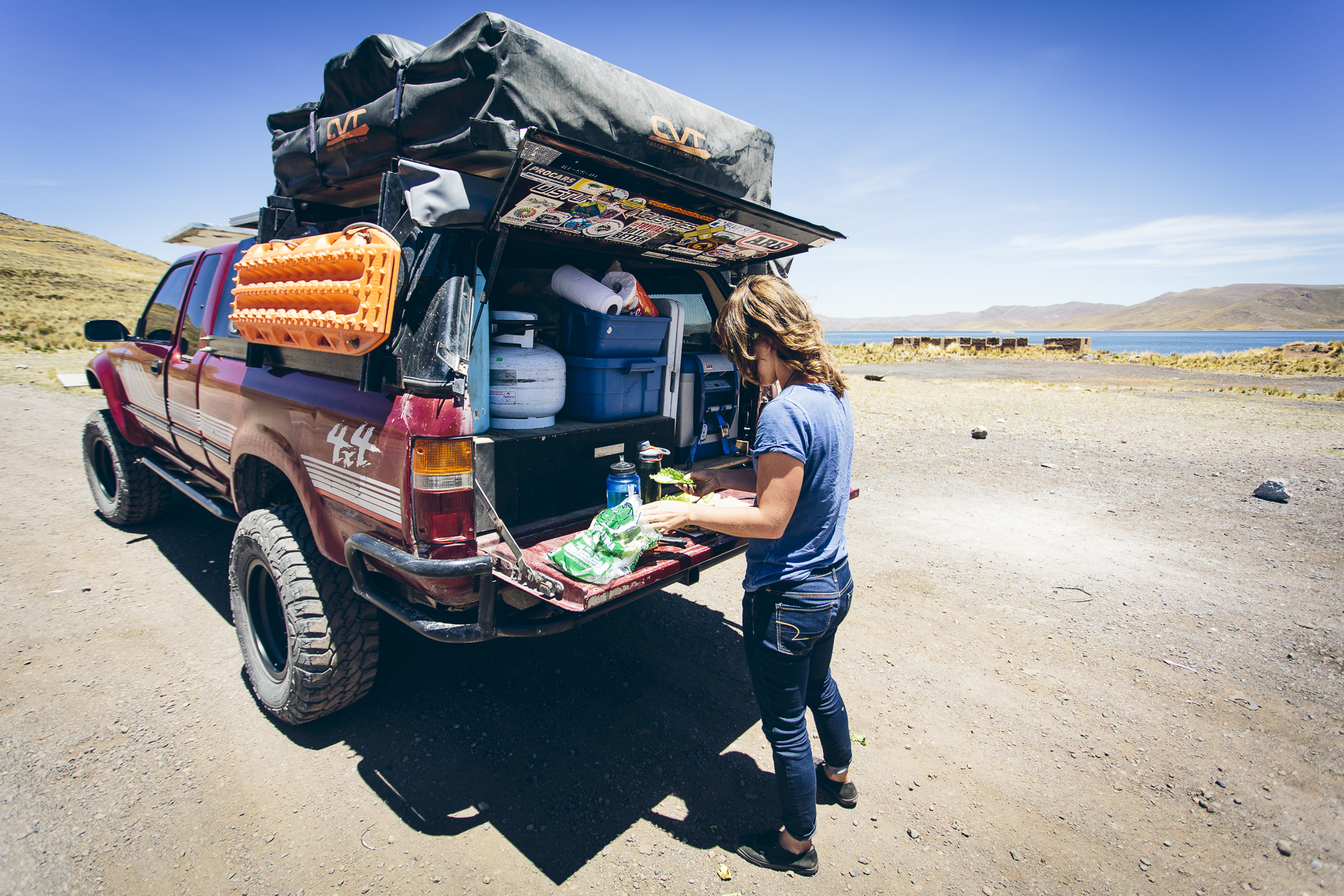 We were ready to leave Peru, but also reflected on our time spent there.  It turned out to be one of our favourite countries.  The culture, incredible fruit and vegetable markets, kind smiles, generous and open people, insanely high mountains, epic hiking, and amazing feeling of adventure was imprinted on our souls.  The northern and southern sections of the country differed greatly in terms of tourism and we preferred the northern mountain section, Cordillera Blanca, and the in-between spots on the way to Lima.  It is rare for us to have the desire to return to a country we have already visited, as we are always eager to explore somewhere and something different.  But with Peru, we felt we had barely scratched the surface.  More mountain adventures and desert opportunities await.  Maybe someday we’ll be back.  You never know.