We drove south from San Felipe assuming that we were going to stop in Puertecitos for a few days before continuing to Gonzaga.  When we arrived at Puertocitos to find less than optimal campgrounds (more like campground-junkyard combos on the beach) for almost $30/night we decided to press on to Bahia San Luis Gonzaga.

Gonzaga welcomed us with white sandy beaches, warm water, and $5/night camping.   There was also a 5ft high jump on a long straight stretch of road that would make a perfect spot to spectate the Baja 1000.  The only problem was going to be sitting still for five days while we waited for the race.  You may ask yourself, “What’s the problem with hanging out on the beach for five days?”  The problem is that we haven’t stayed more than two nights in one place since we left on this little road trip.  We felt a constant urge to press on, to see more, to experience more… more more more.  This turned out to be a good exercise for us.  Sitting still helps save you money, gives you time to actually relax, and the opportunity to meet just as many people as you would if you were constantly moving.

After a few days at Gonzaga we had routines again.  Wake up, make our papaya/banana smoothies.  Read.  Swim/float to avoid the 9:30 a.m. sand flea storm.  Exercise.  Eat.  Read.  Swim.  Look for whale sharks.  Drink margaritas.  Eat. Sleep.  By the fourth day we were settled down and really enjoying the new day-to-day activities.

Yes, there were whale sharks.  On the first day there was a small (16ft long) whale shark feeding in the bay.  Ashley, Sam, Erica, and I swam out to take a closer look while being guided by another camper (Scott).  Scott was on a stand up paddle board telling us where the little whale shark was, and we followed.  After 20 minutes, Sam won the prize for getting the closest (he could have touched it if he put his hand out), and Scott wins the prize for scaring it away by trying to jump on its back.  Apparently “the little ones don’t like it too much when you jump on them”.  Our eyes were peeled for more over the following days, but after being jumped on by a human they kept their distance.

A few days later we shared a campfire with the guys from the 337x team, Relentless Road.  They were pre-running for the Baja 1000 and happened to be camping just down the beach from us.  They’re putting together a little documentary of their trip so make sure to check their site out.  Hopefully the awesome campfire guitar jam session they recorded makes the cut.

After five days we didn’t want to leave.  Only the high winds and Baja 1000 could make us pack up camp.

We kept running into guys prerunning for the 1000.  Richard was getting way too excited already! 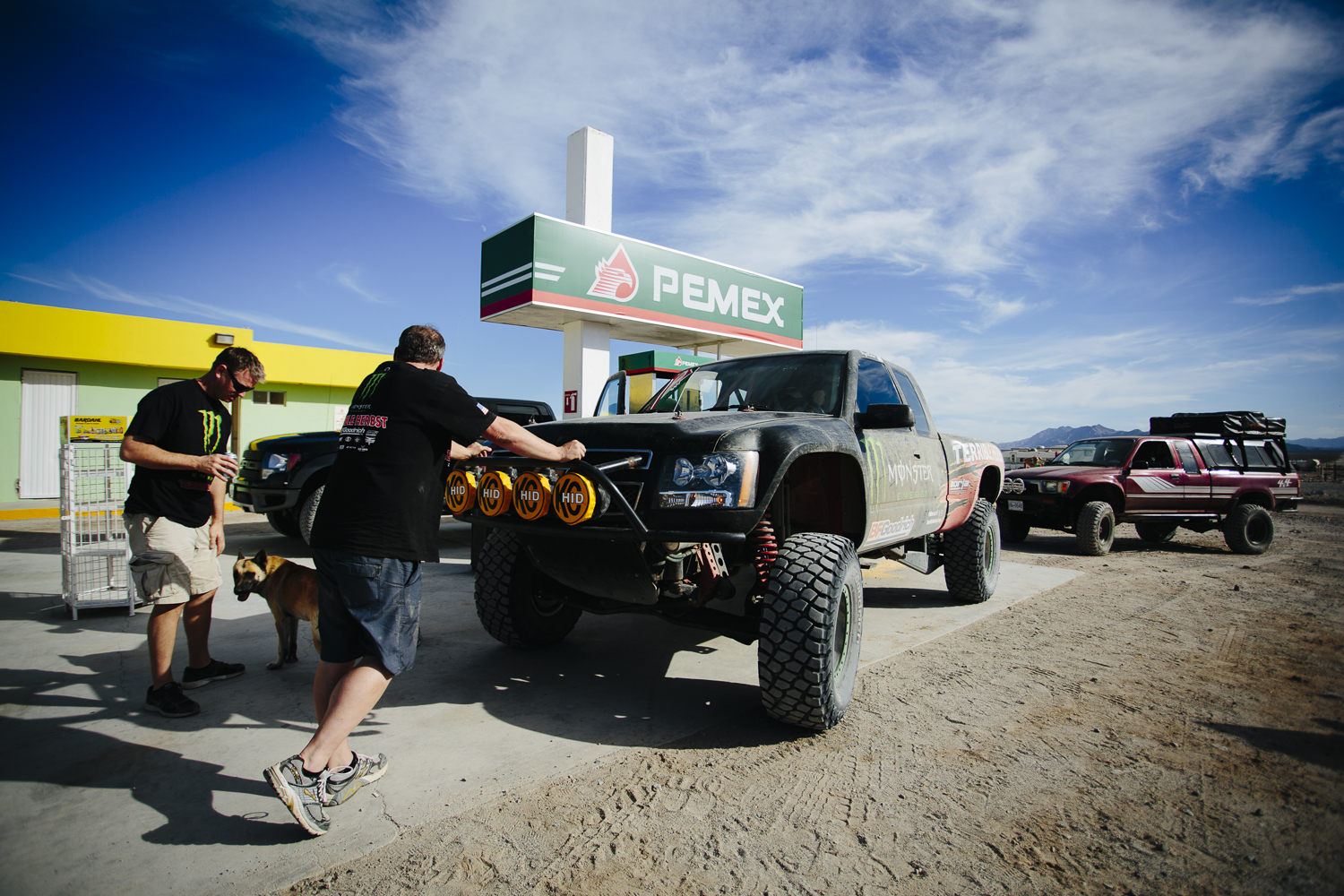 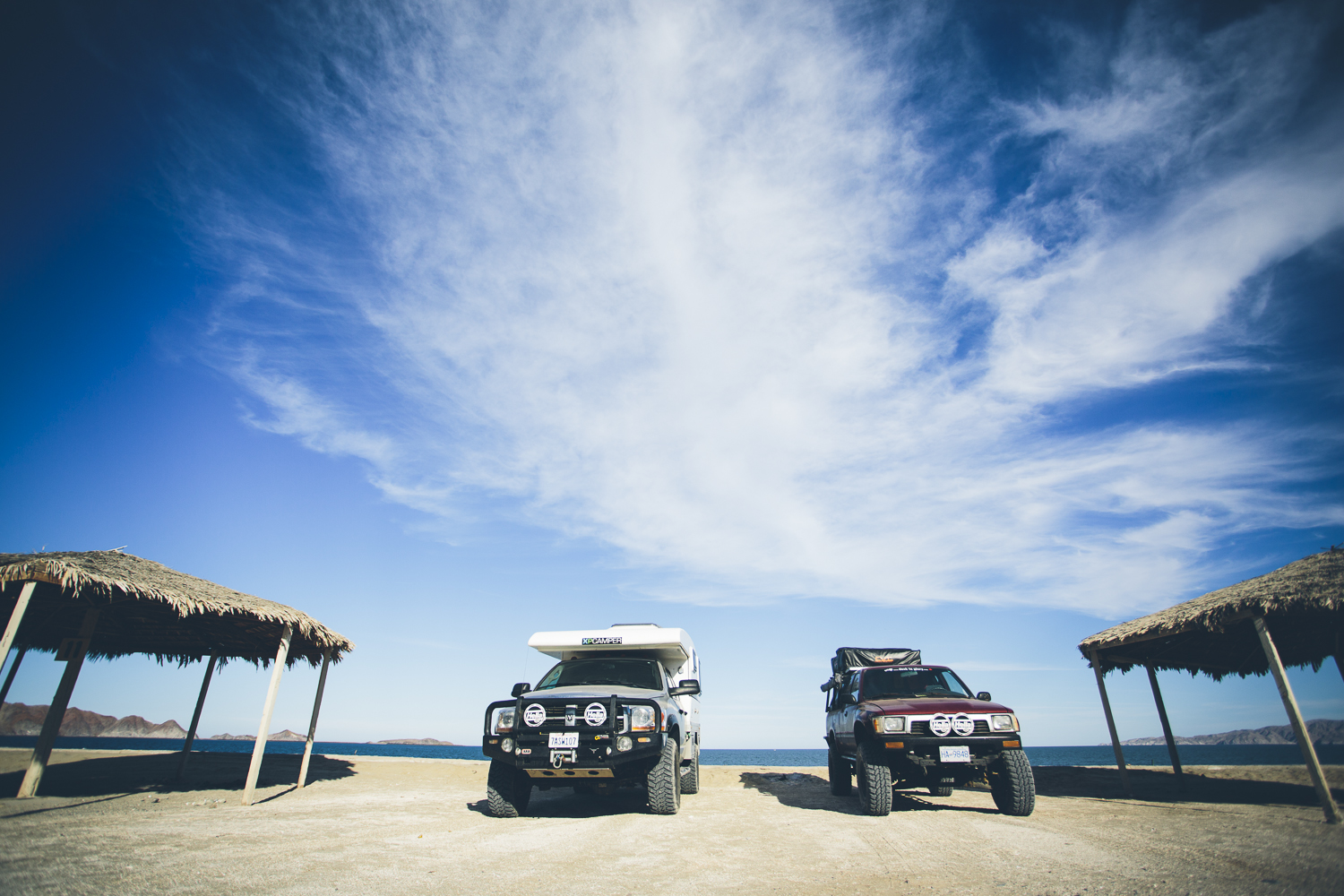 Living it up with these sweet facilities.  Check out the mural inside!  I guess this is why the site was only $5 per night… 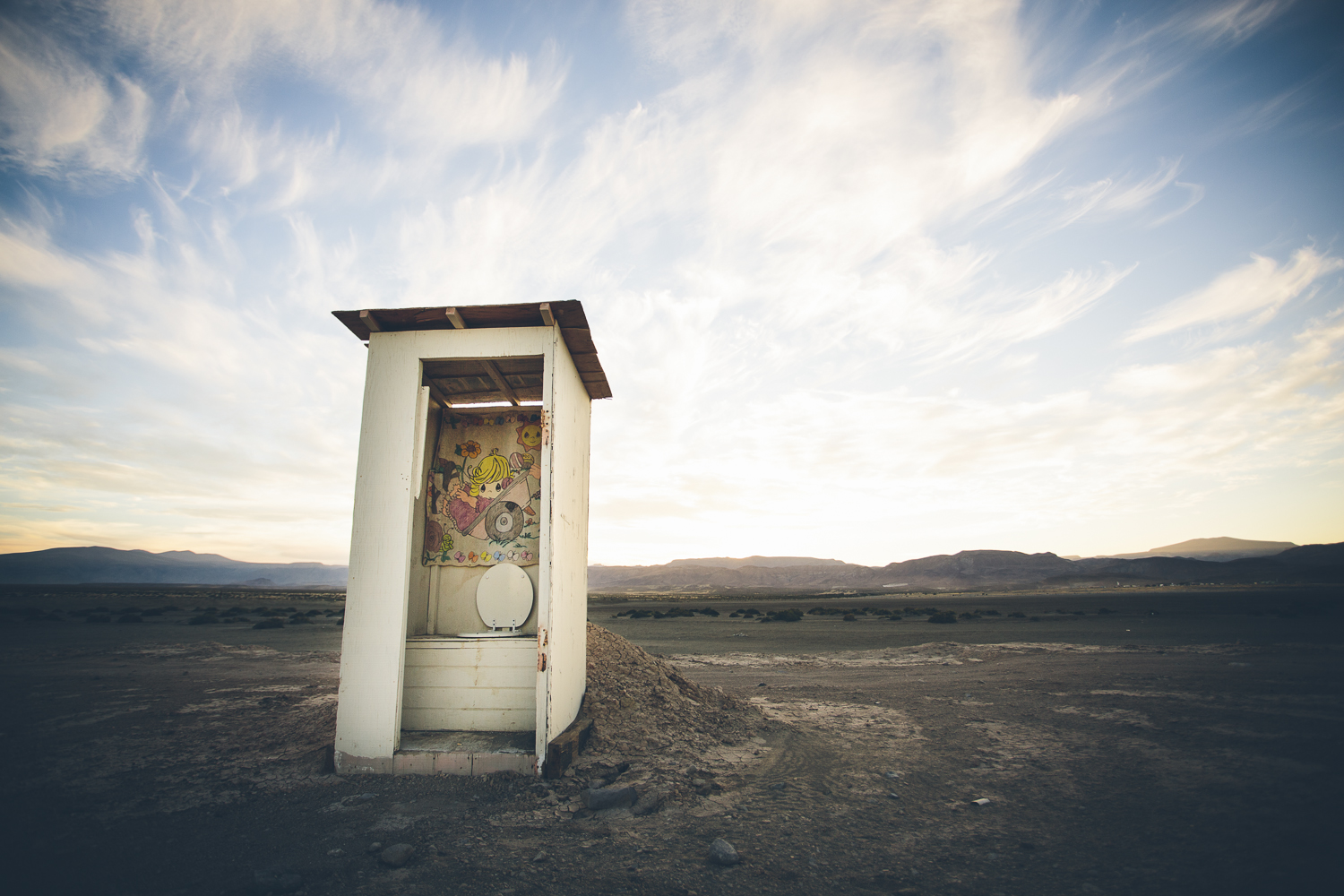 Erica and Ashley on the hunt for whale sharks. Seriously. 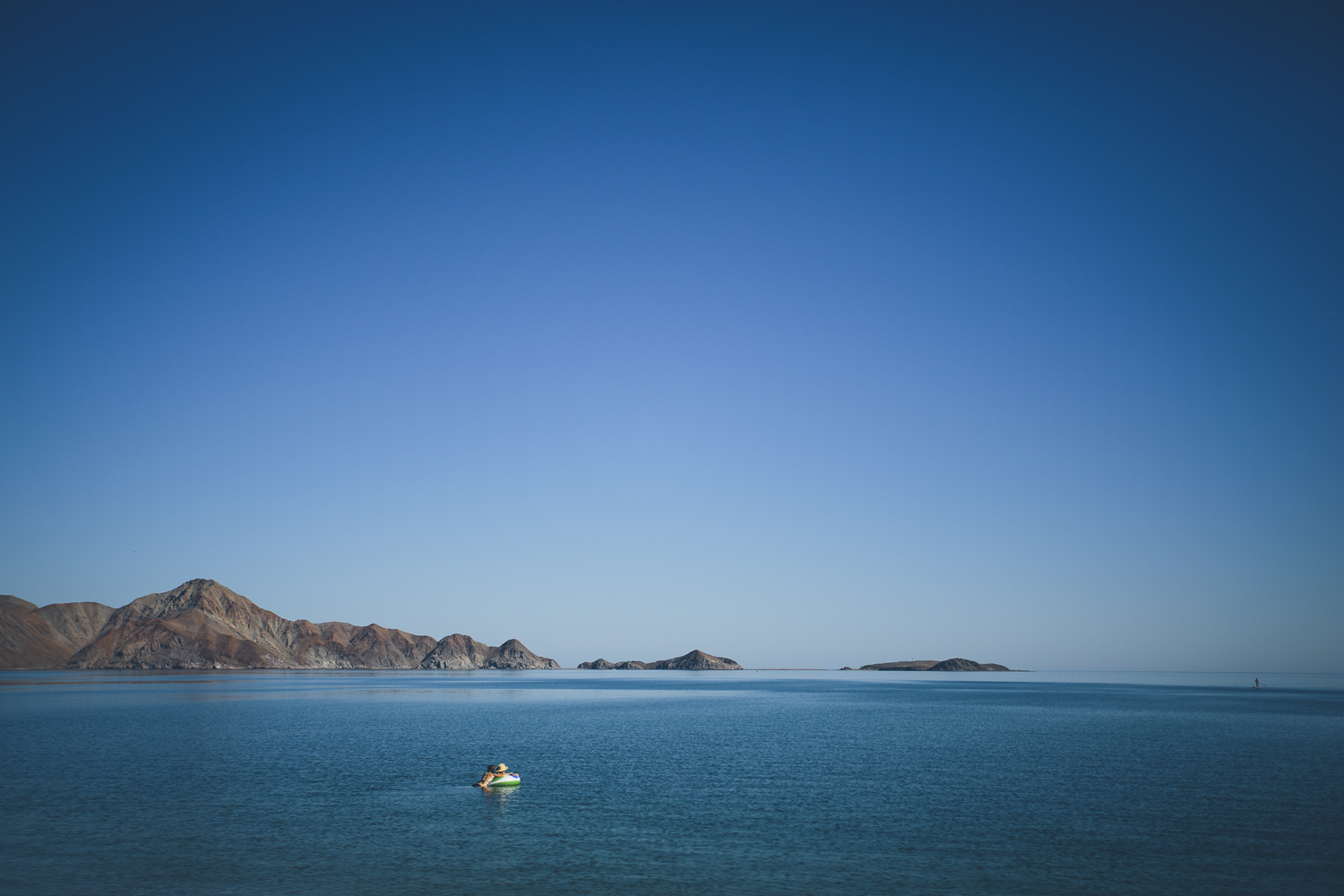 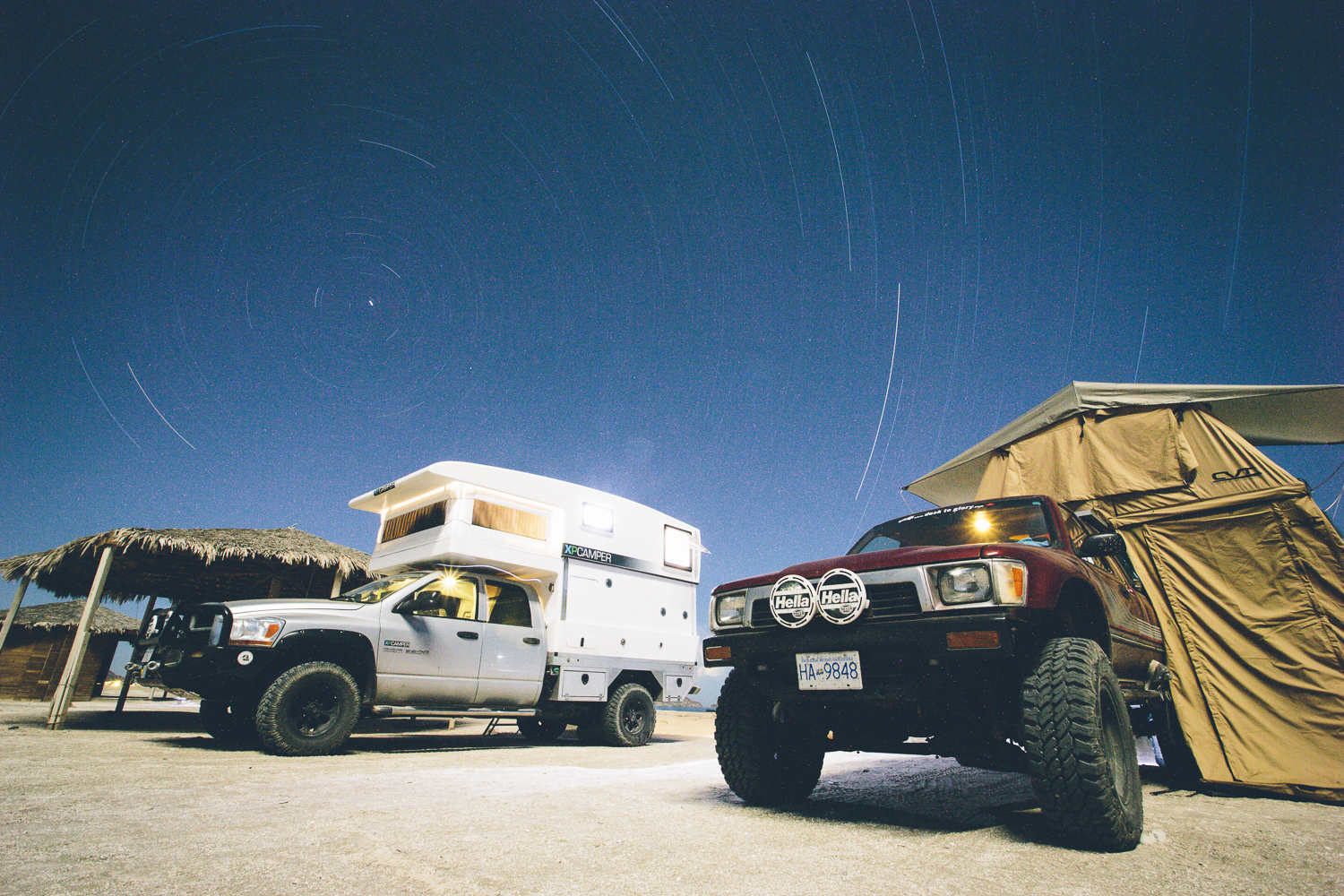 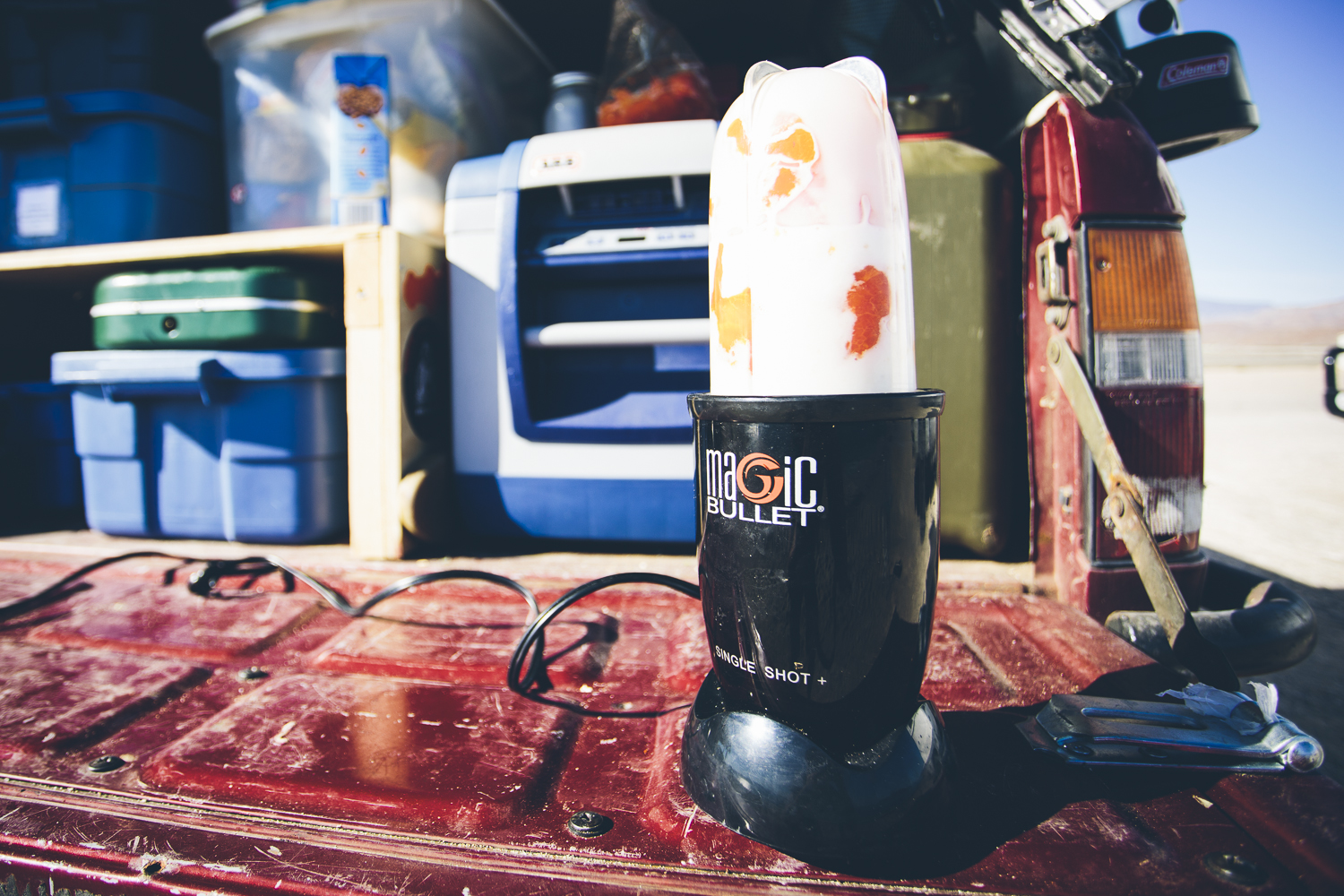 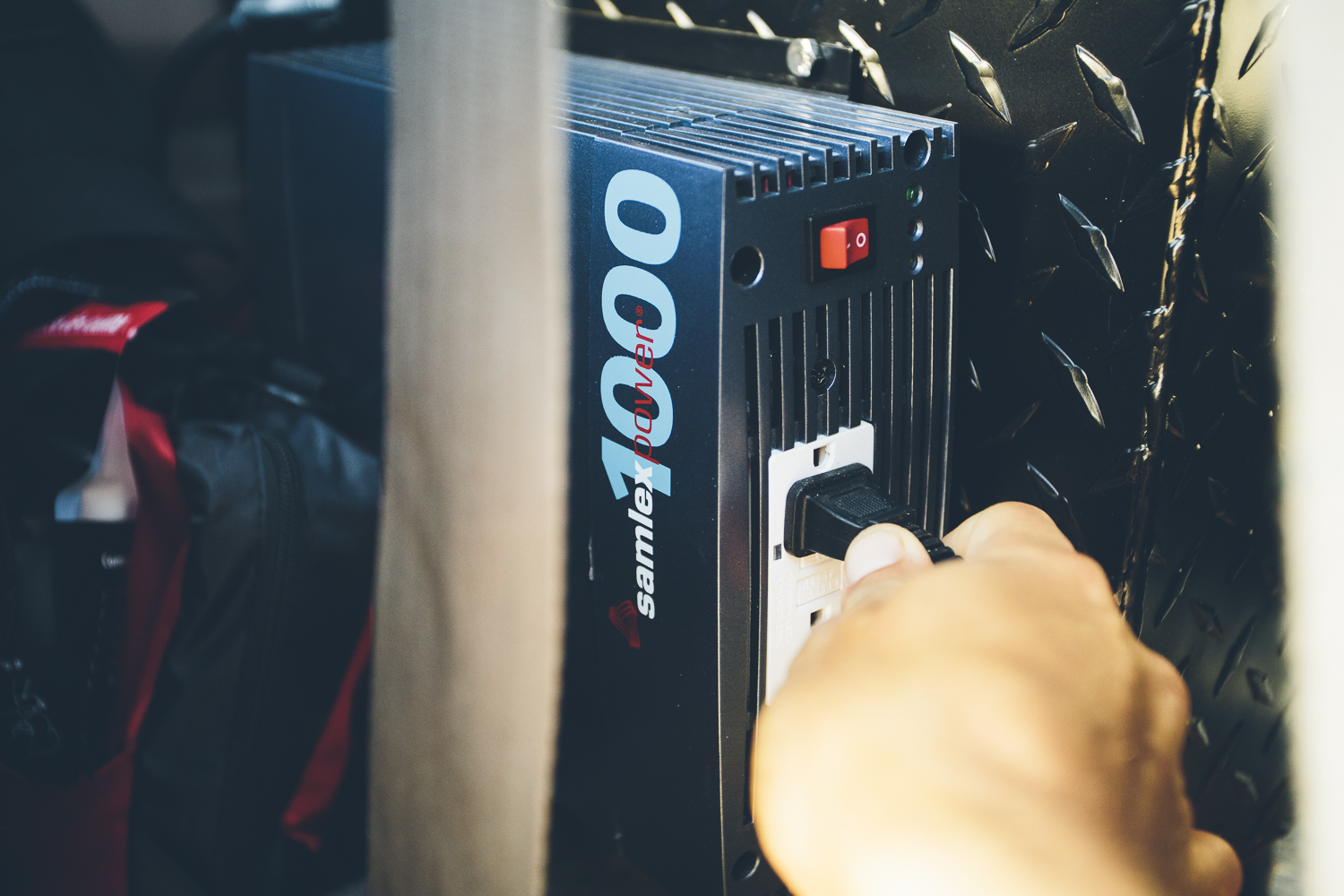 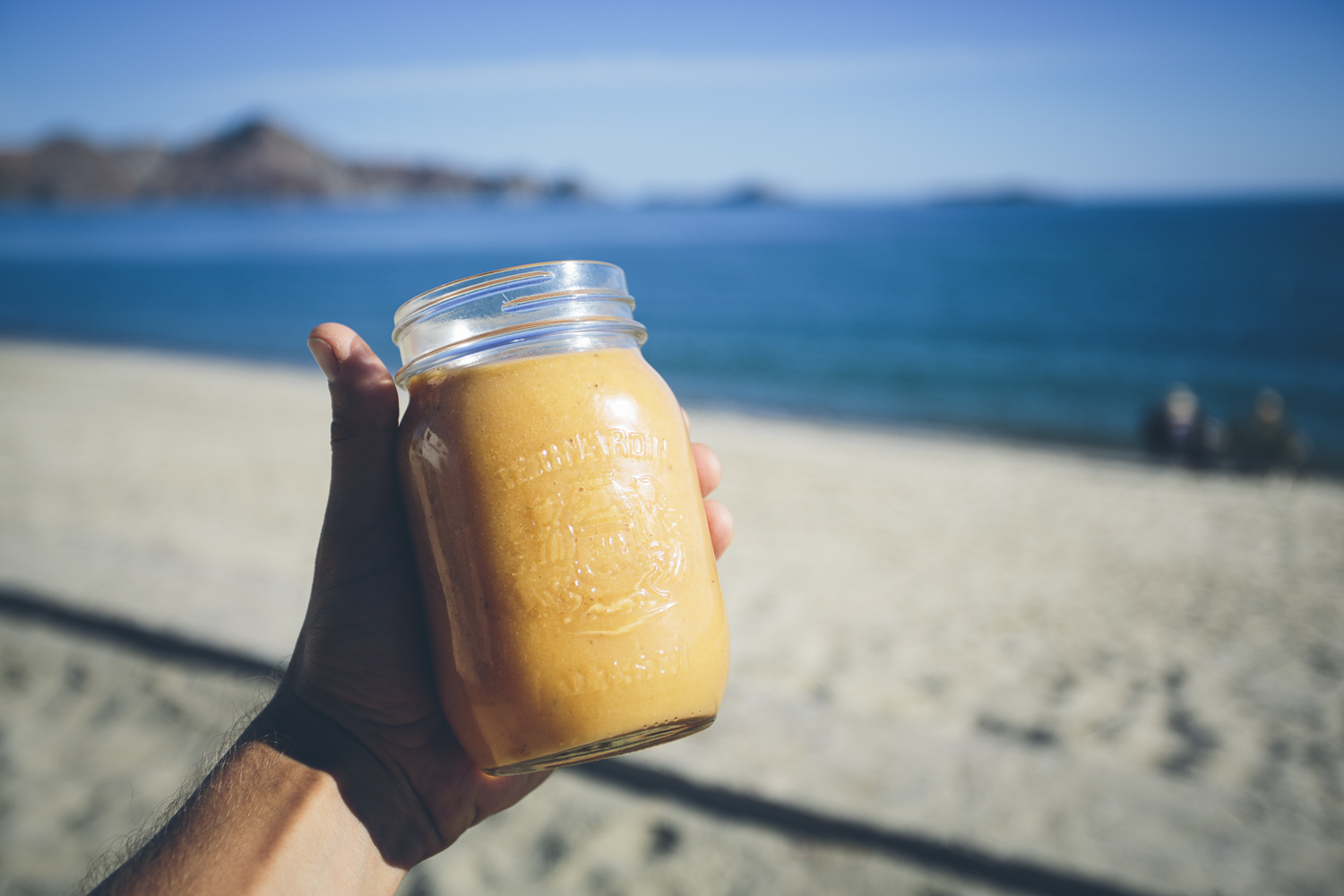 After starting the day with a papaya smoothie we finished it up with blended pineapple margaritas! 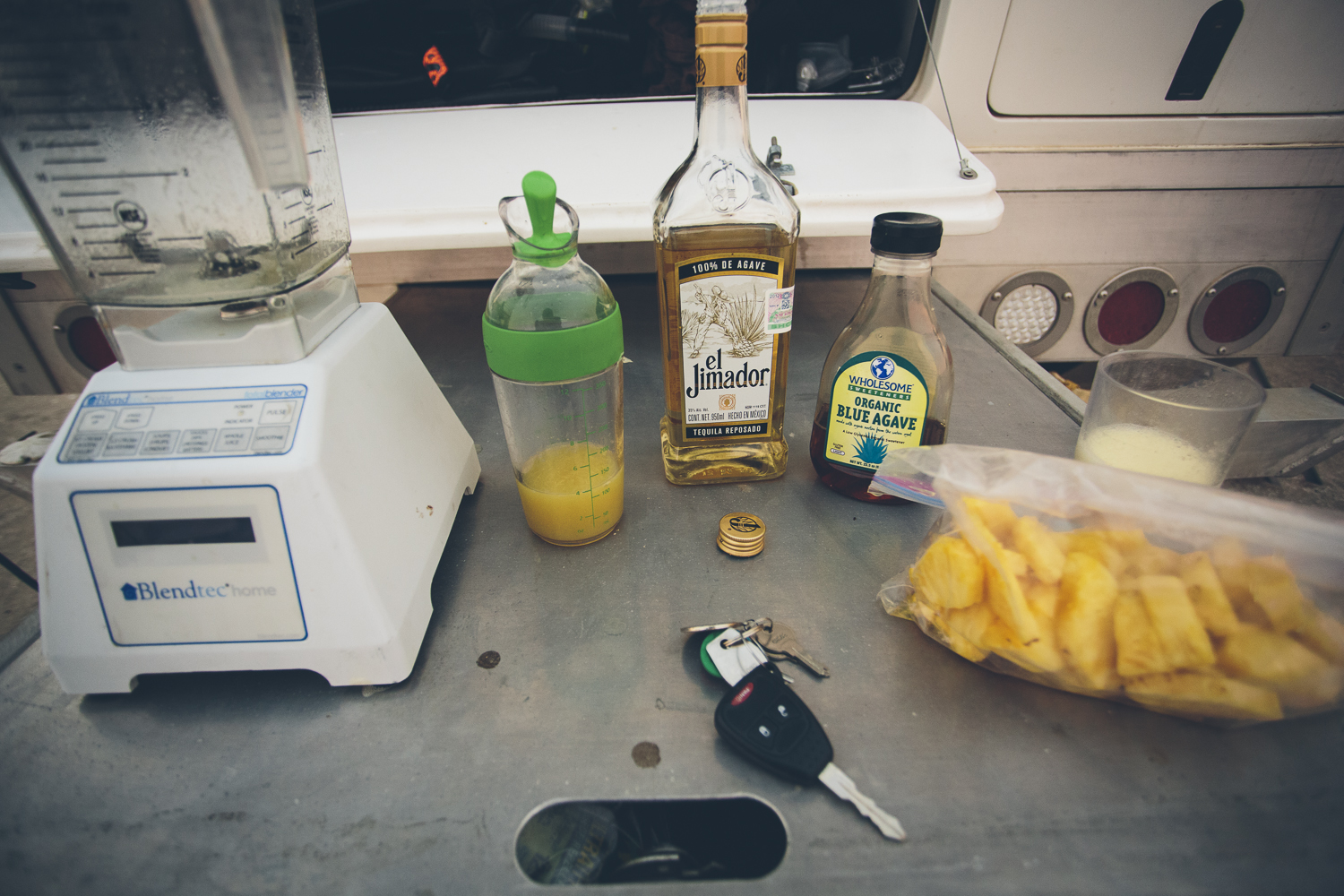 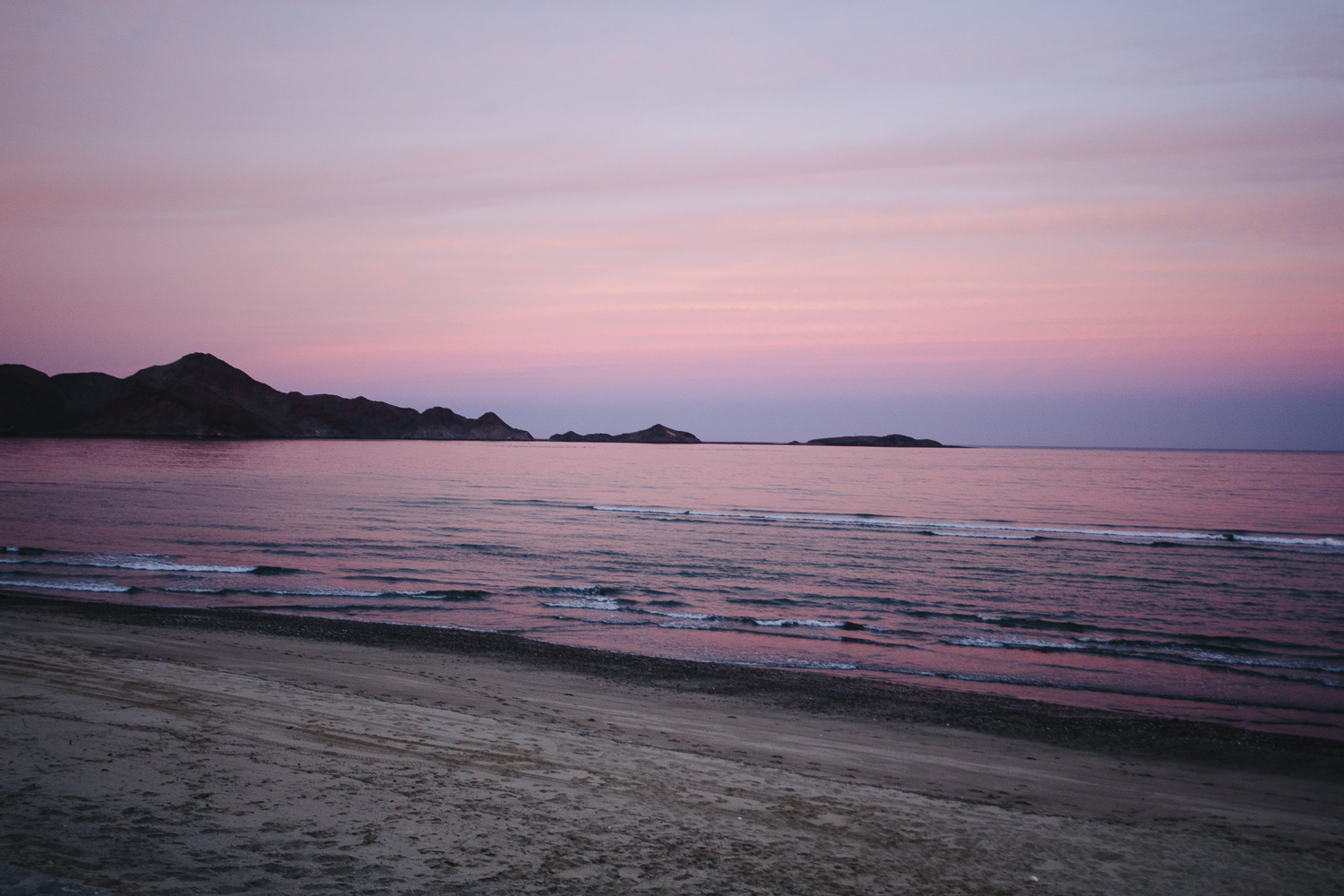 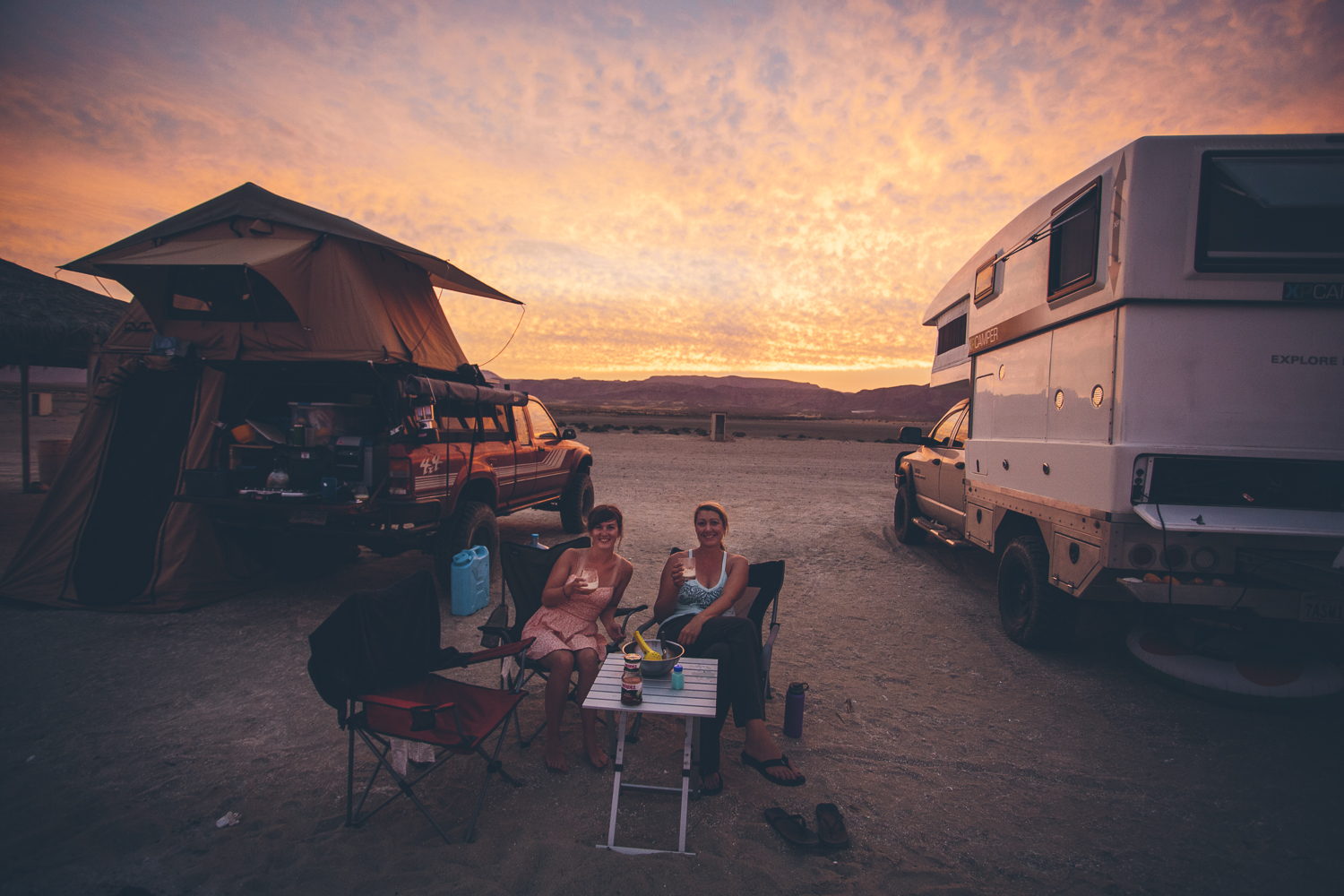 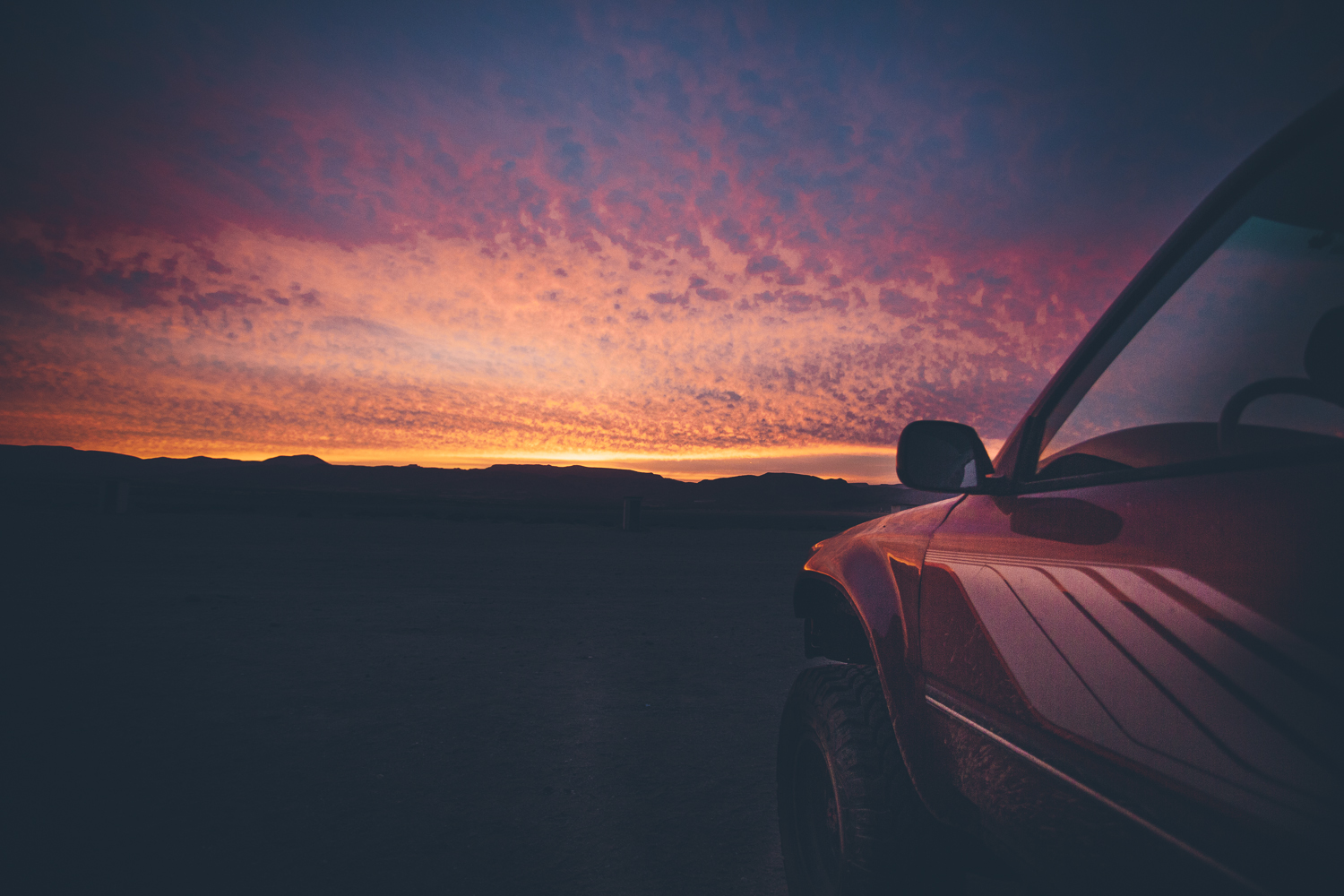