Baños and the Cloud Forest of Ecuador

It was time to head to Baños and the cloud forest of Ecuador! Two days of driving took us from the coast to a green cloud forest filled with evidence of former mudslides, eye-catching waterfalls, and serpentine roads. While climbing one of the hills (at 13,000ft of elevation I guess we can call them mountains) we passed by a guy in a bright yellow shirt pushing a baby stroller. “Jamie!” we yelled out the window.

Jamie is running (with an appropriate Instagram and Facebook handle of @JamieIsRunning) from Vancouver, BC to Buenos Aires. We stopped, chatted with him on the side of the road, and then continued on in separate directions… us to the mountains and Jamie to the coast.   I think at the time of meeting him, Richard may have been complaining about a stiff back from the long drive. I guess that’s nothing compared to the 60km that Jamie ran in the same day… uphill.  What really stuck with us though, was how positive and upbeat he was. We wish him the best of luck as he continues his run down south!

We eventually parked ourselves at Pequeno Paraiso, which is run by the ever friendly and helpful Sue, a red-haired Brazilian with a British accent. Of course as we arrived we spotted Steve’s yellow Unimog, but he had just left that day on a trip to the jungle. We laughed at the timing of things as we always just miss Steve by one day, whether we are leaving or arriving. 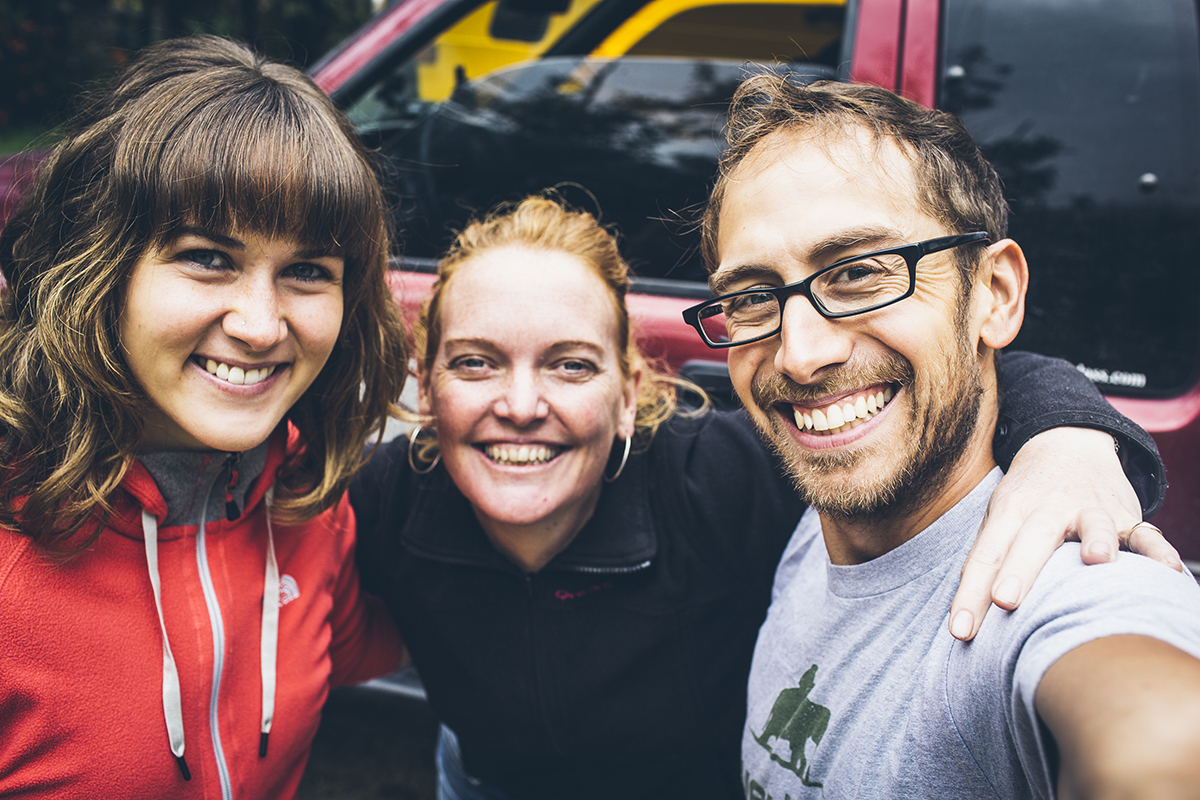 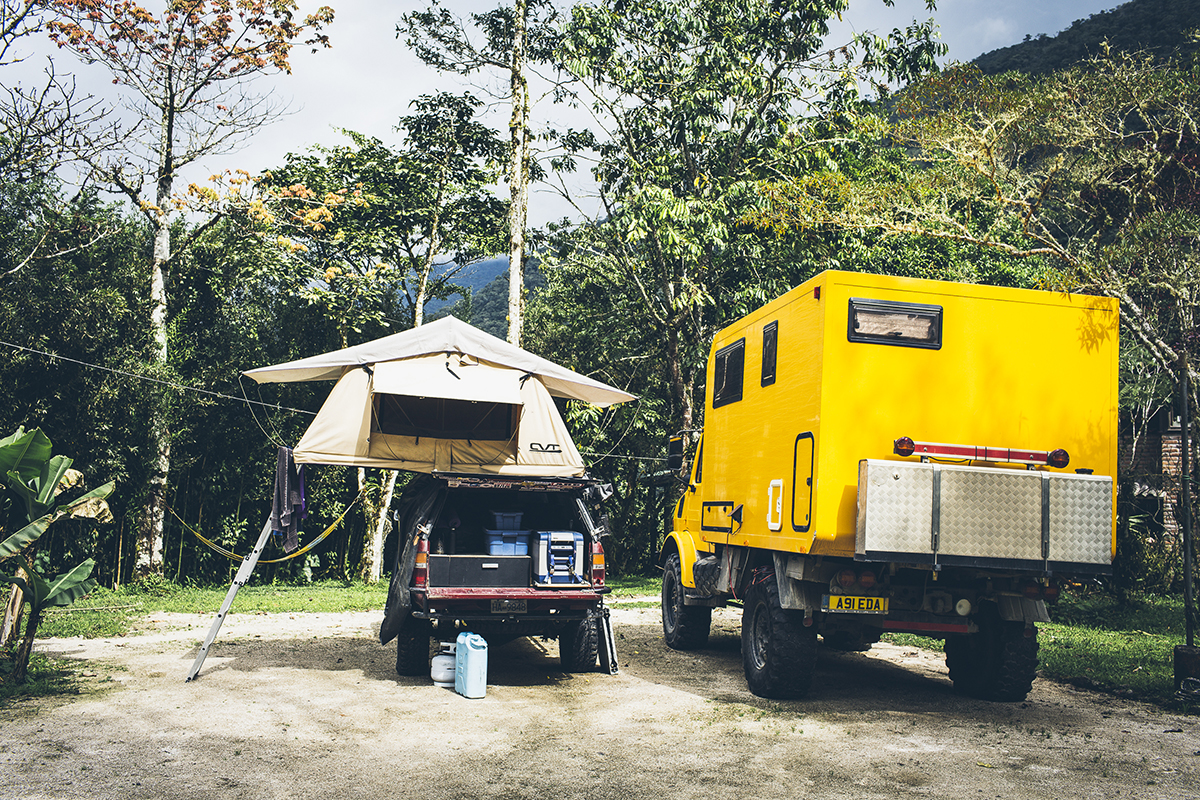 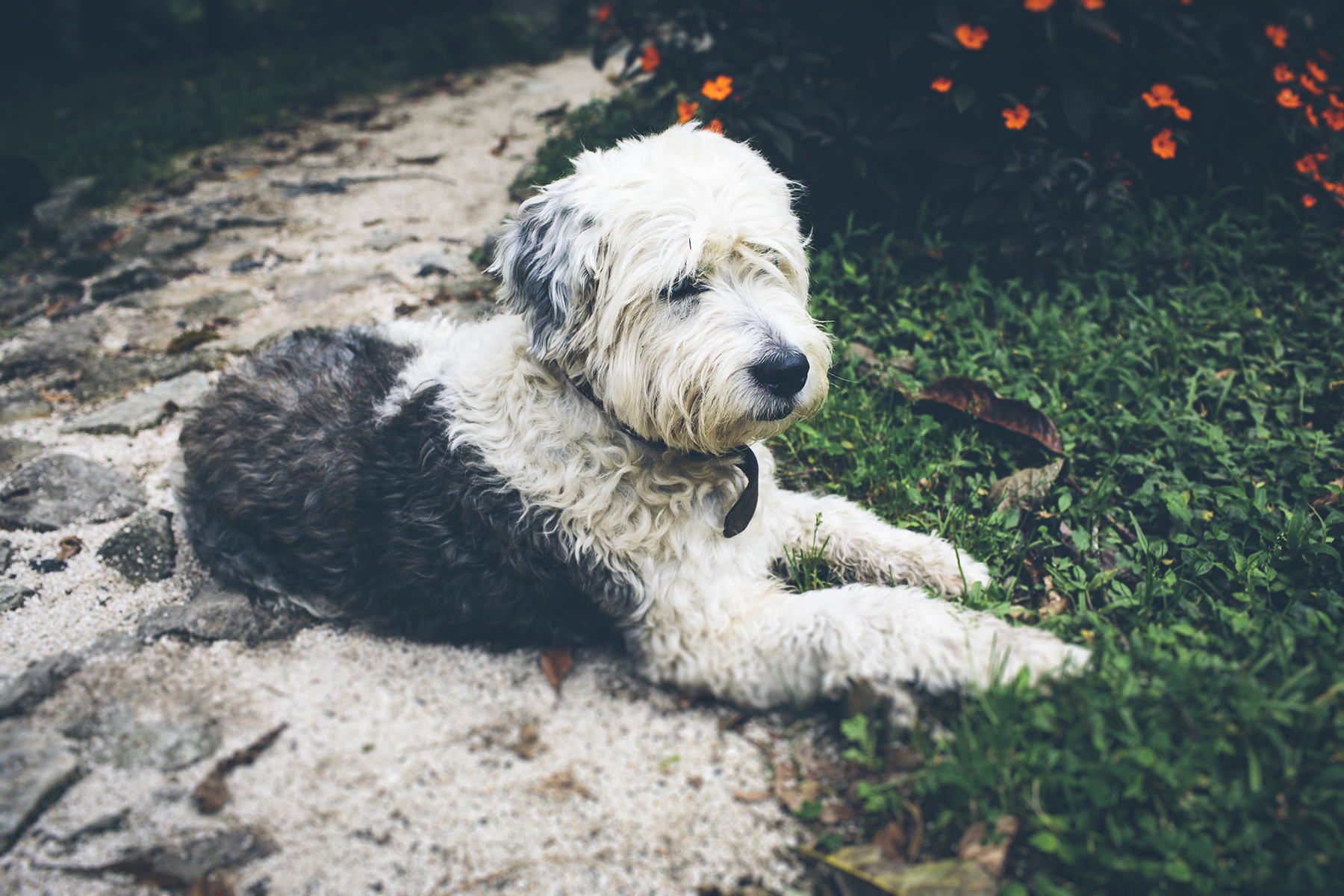 One day during our visit we took the bus to Puyo, a town referred to as the doorway to the jungle. We had no intention of actually making our way through the doorway and into the jungle due to our fears of little creatures with way too many legs (or no legs at all), brown rivers filled with penis-inhabiting water dwellers (Richard shudders…), dengue fever, yellow fever, and fish with teeth that could cut through human limbs. Needless to say, Puyo was good enough for us. We went to visit a man called Chris, originally from California, who directs tours through an extensive garden forest filled with Amazonian plants and trees. Here we would learn about various Amazonian indigenous tribes and the plants and herbs they use regularly for healing and Shamanic practices. I asked about recommendations for healing some acne and we listened for 20 minutes about the benefits of washing in and drinking your own urine. Yeah… maybe I’ll try rubbing some plant leaves or something on the acne before we try the pee thing.

All joking aside, it was very fascinating to learn about the traditional Amazonian medicine practices, especially with my background in nutrition and interest in herbal medicine.  Being able to touch and feel the plants and tree bark, and learn about how the indigenous people prepare the herbs reminded me of our close connection to nature not only through appreciation by hiking or sightseeing, but also by means of health and wellness.  So yeah, my inner hippie really came out that day.

We learned that the Turuji plant has strong leaves which are used by the Amazonian Shuar tribes to construct thatched roofs atop their houses, as you can see below. 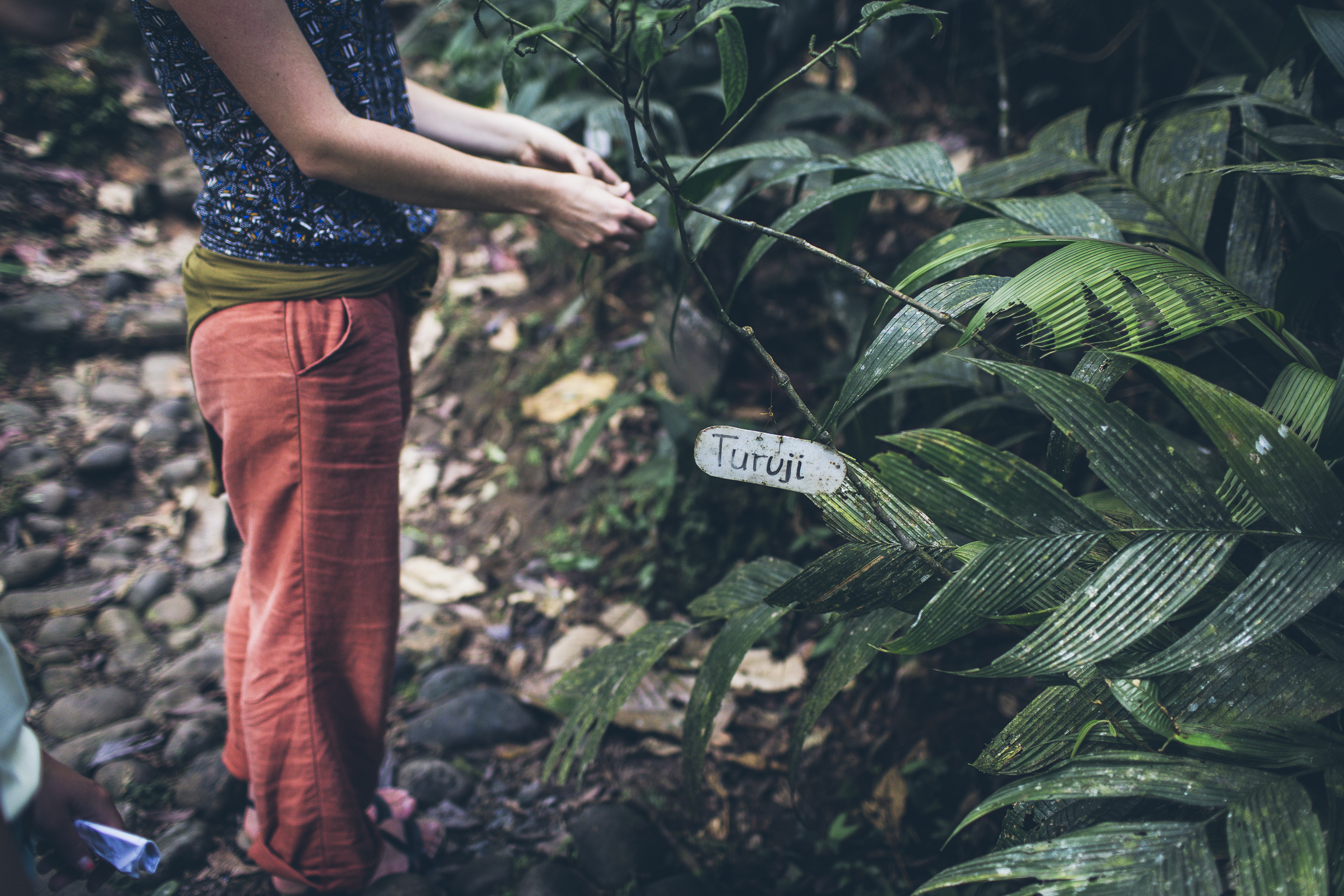 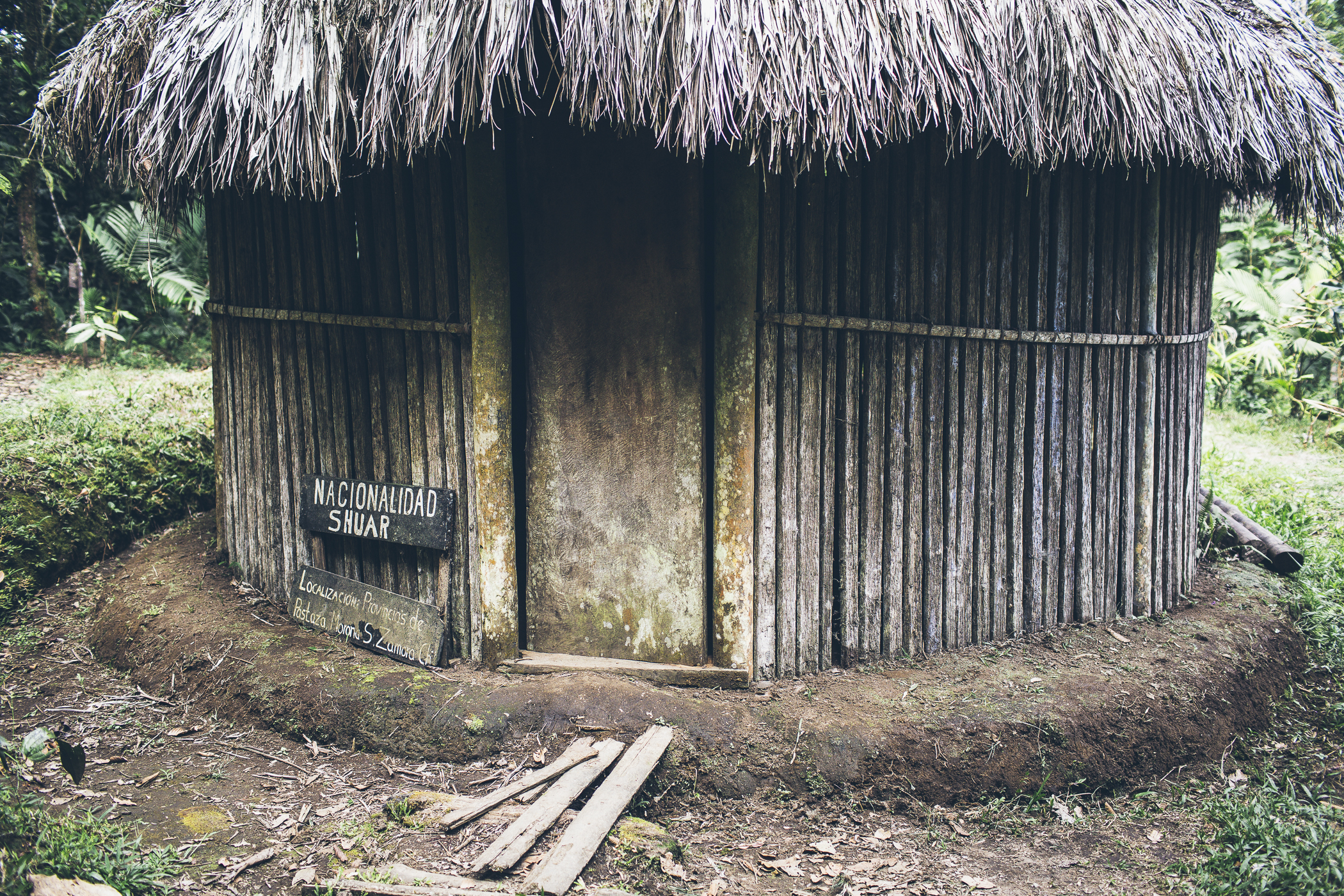 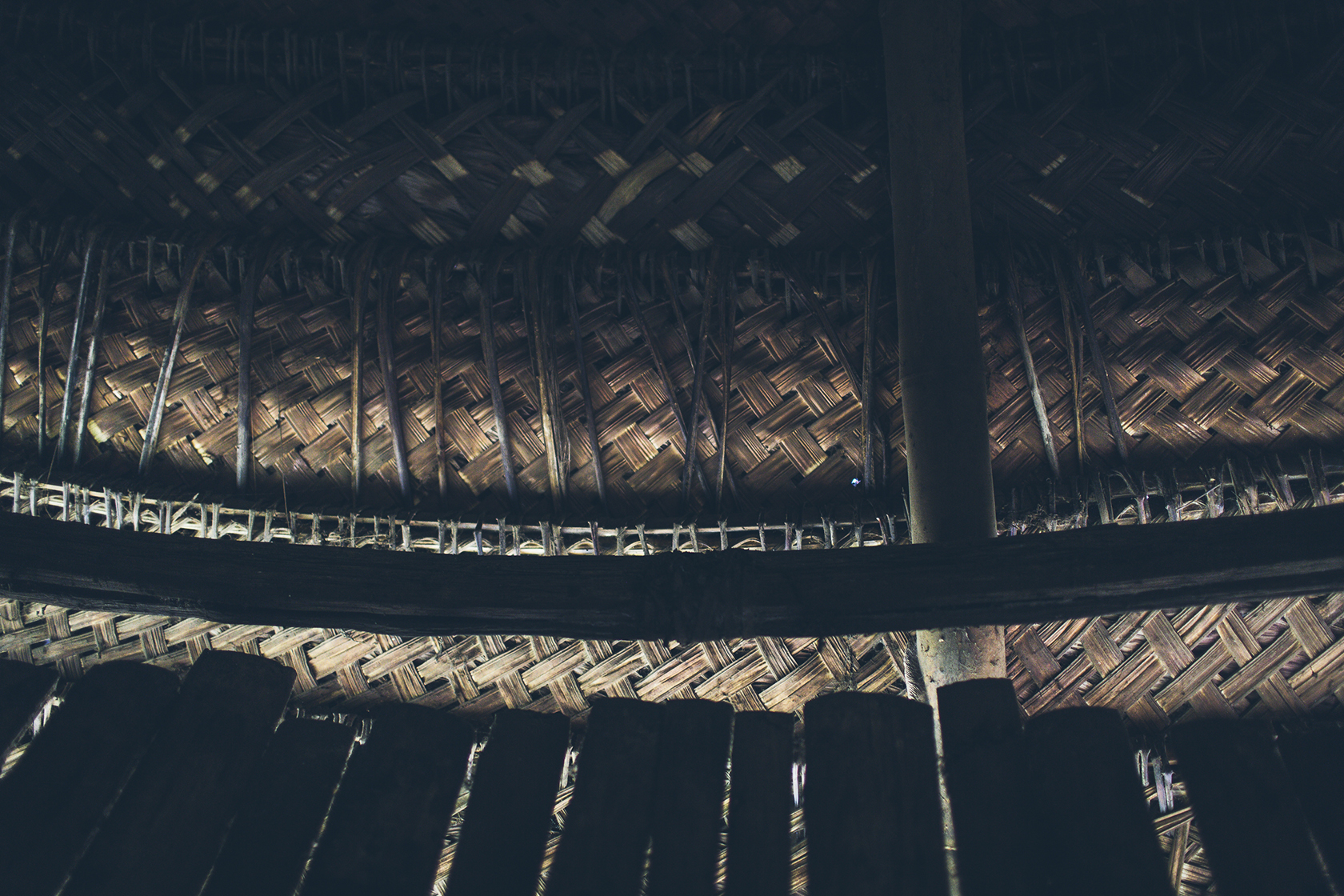 I loved these monkey-tail plants… so strange! 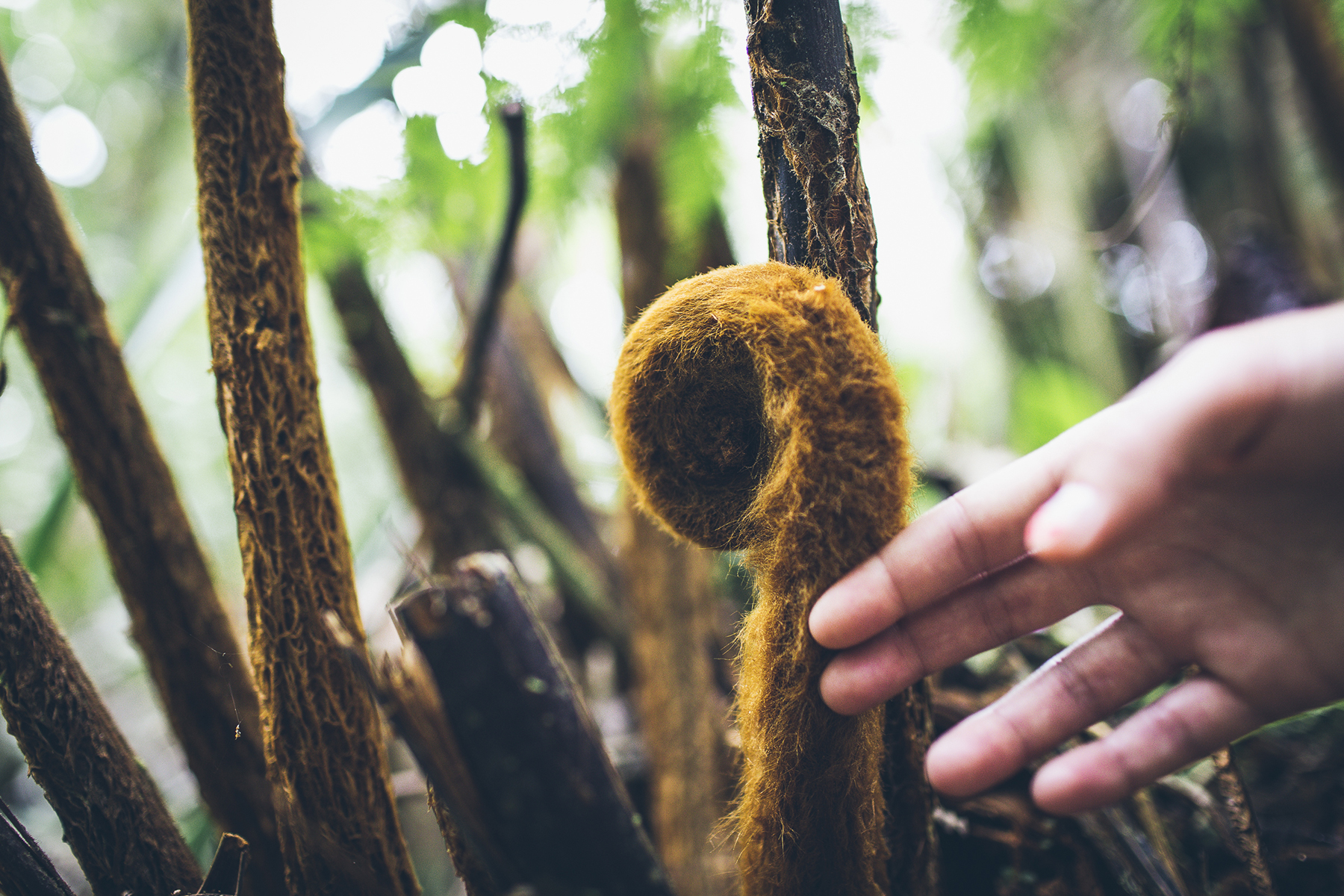 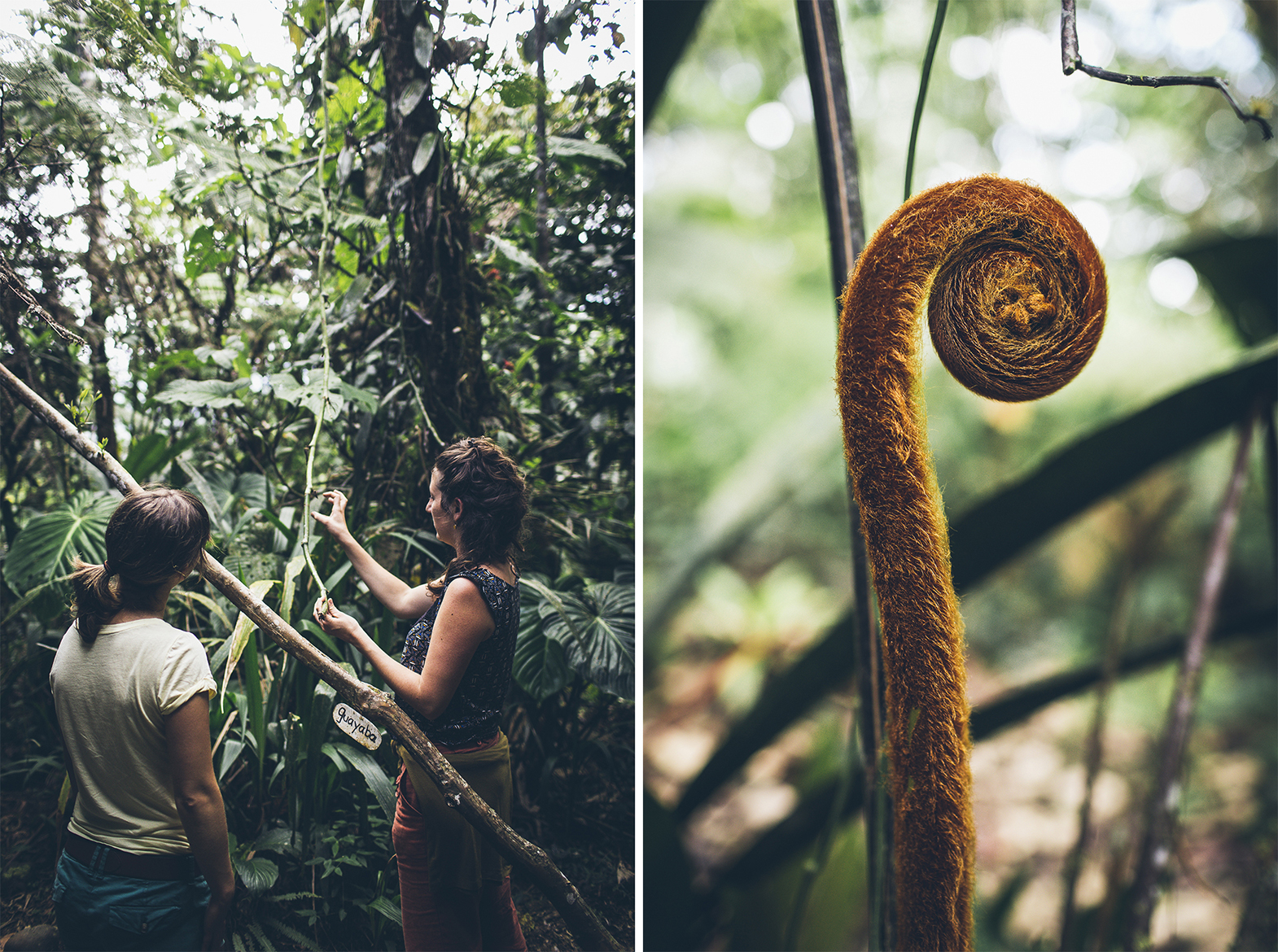 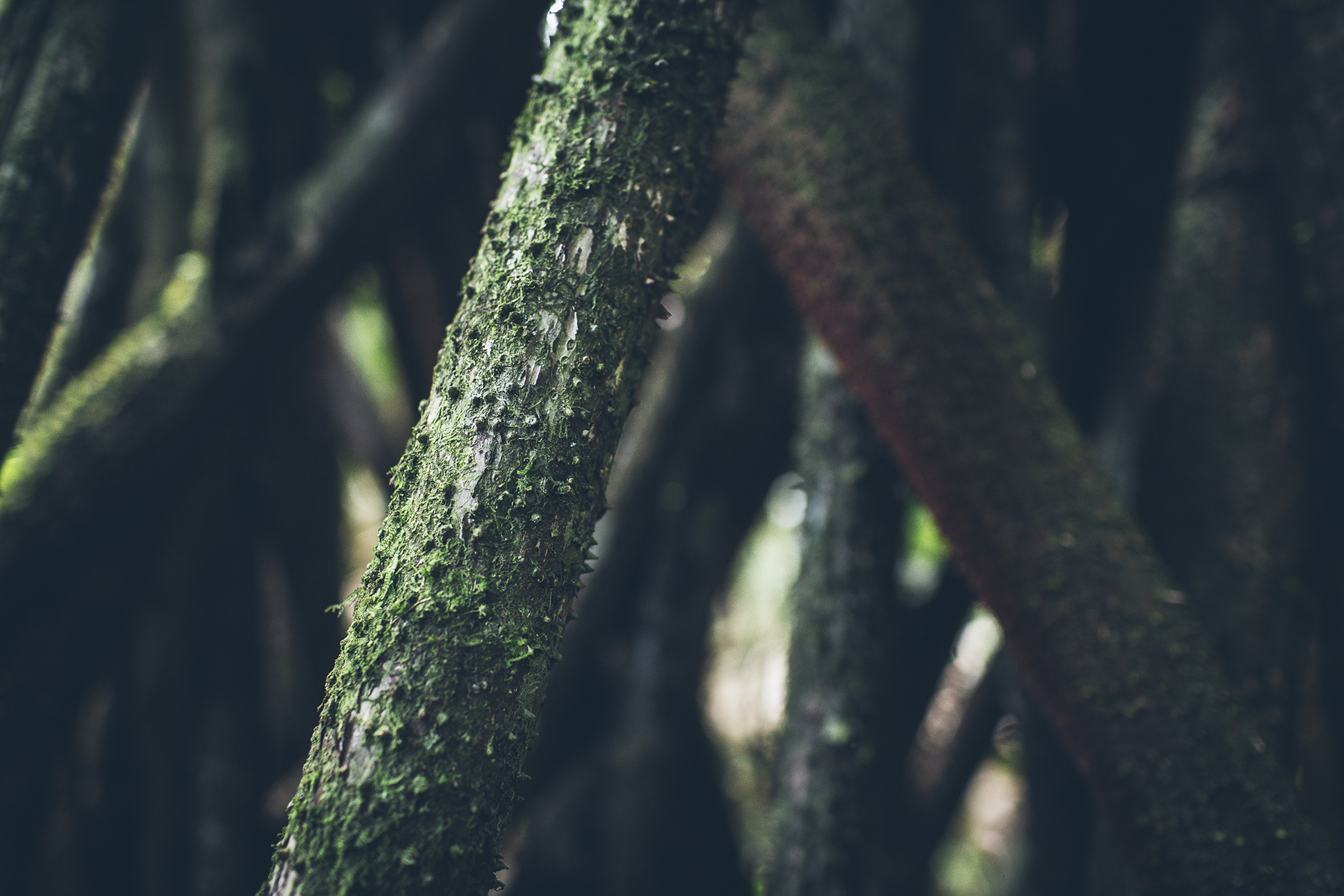 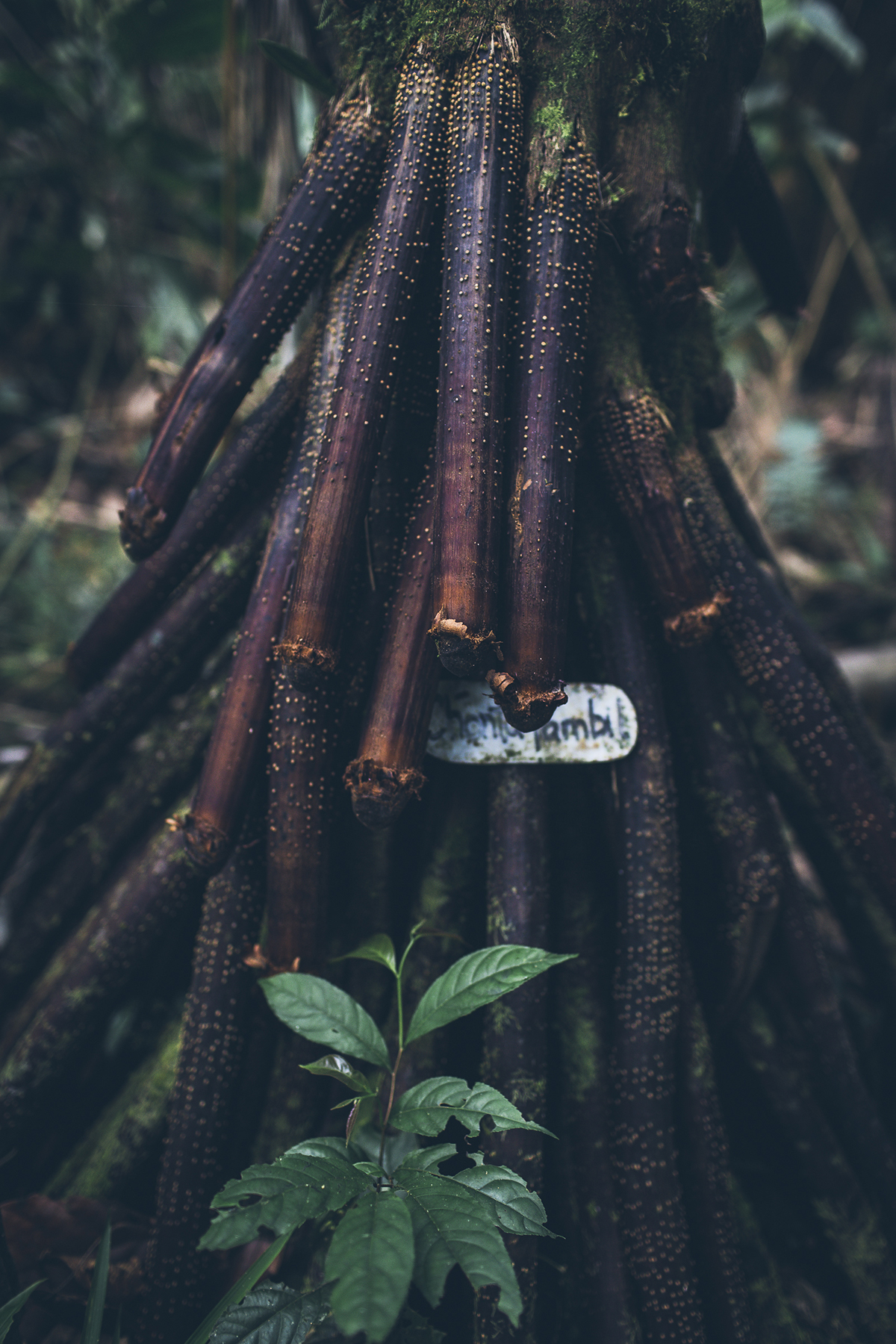 The fronds of the Paja Toquilla plant are weaved into the Ecuadorian-originated Panama hat. 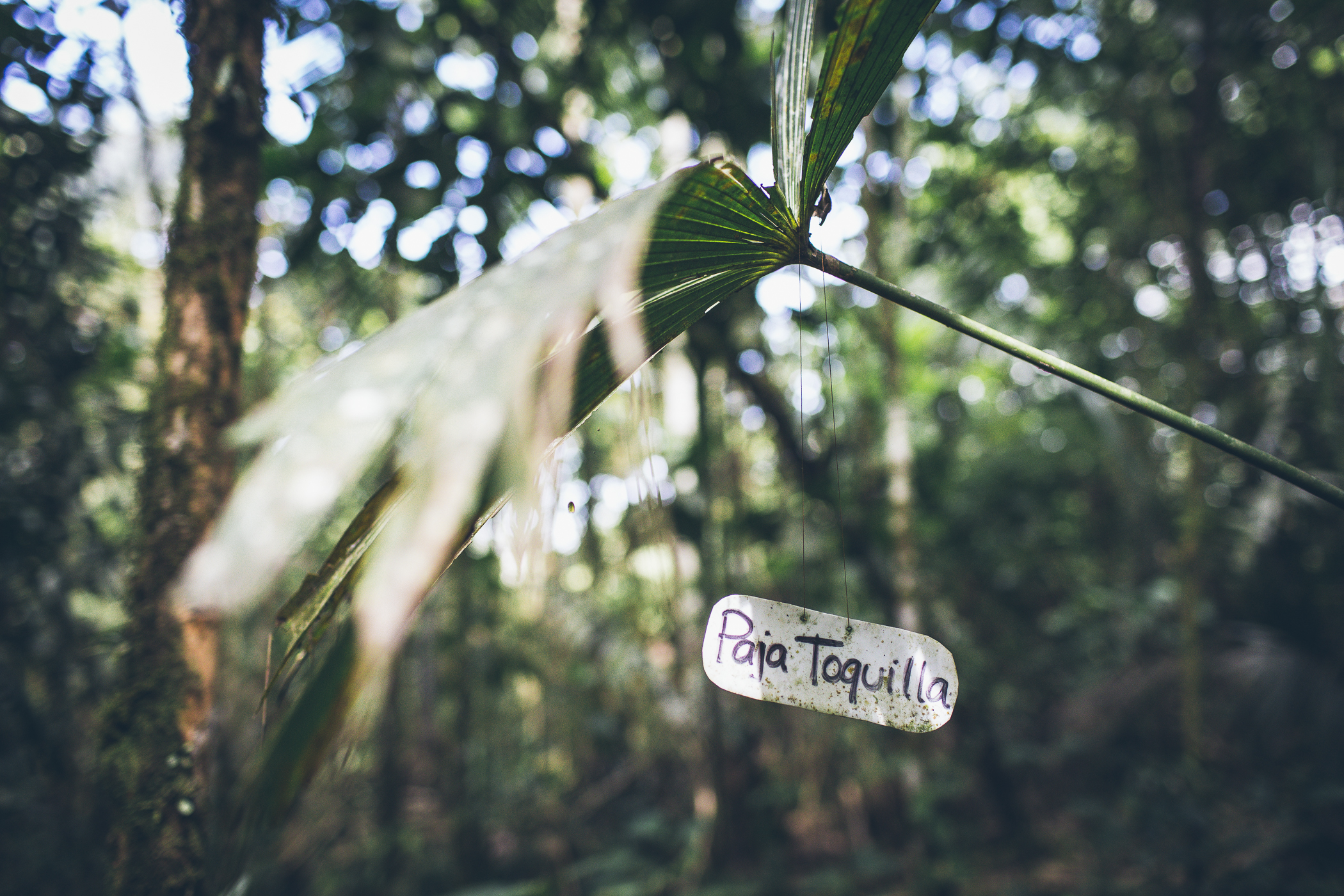 Curarina is used as a snake-bite antidote.  The bark of the Cruz Caspi tree is made into a tea and used by the Amazonian women as a method of birth control. 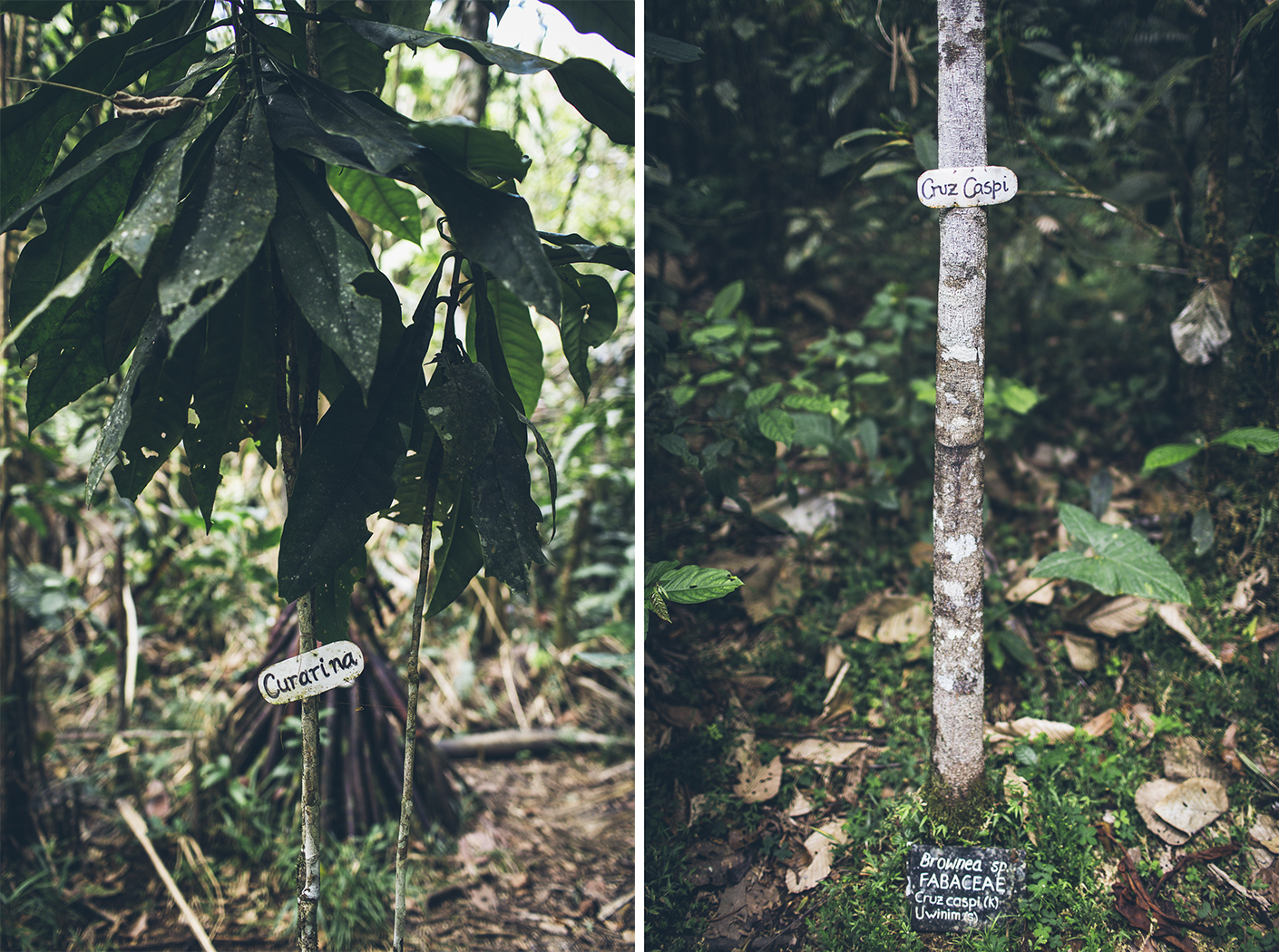 The Sangre de Drago (Dragon’s Blood) tree was my favourite.  When you cut the bark it emits a rich blood-red sap that is just beautiful.  The sap can be ingested for internal problems such as ulcers and traveler’s diarrhea, and externally for acne and topical skin abrasions such as cuts and scrapes. 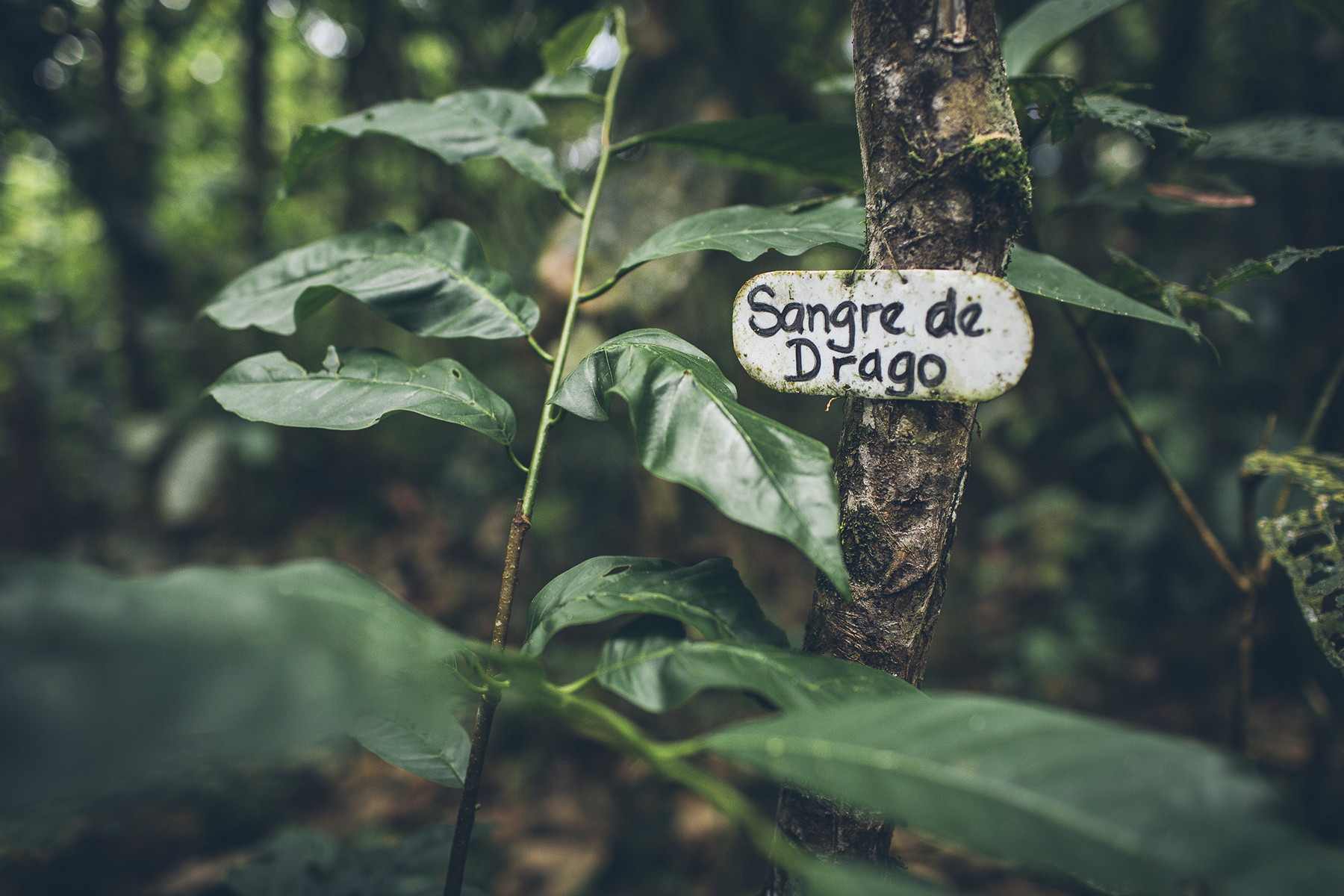 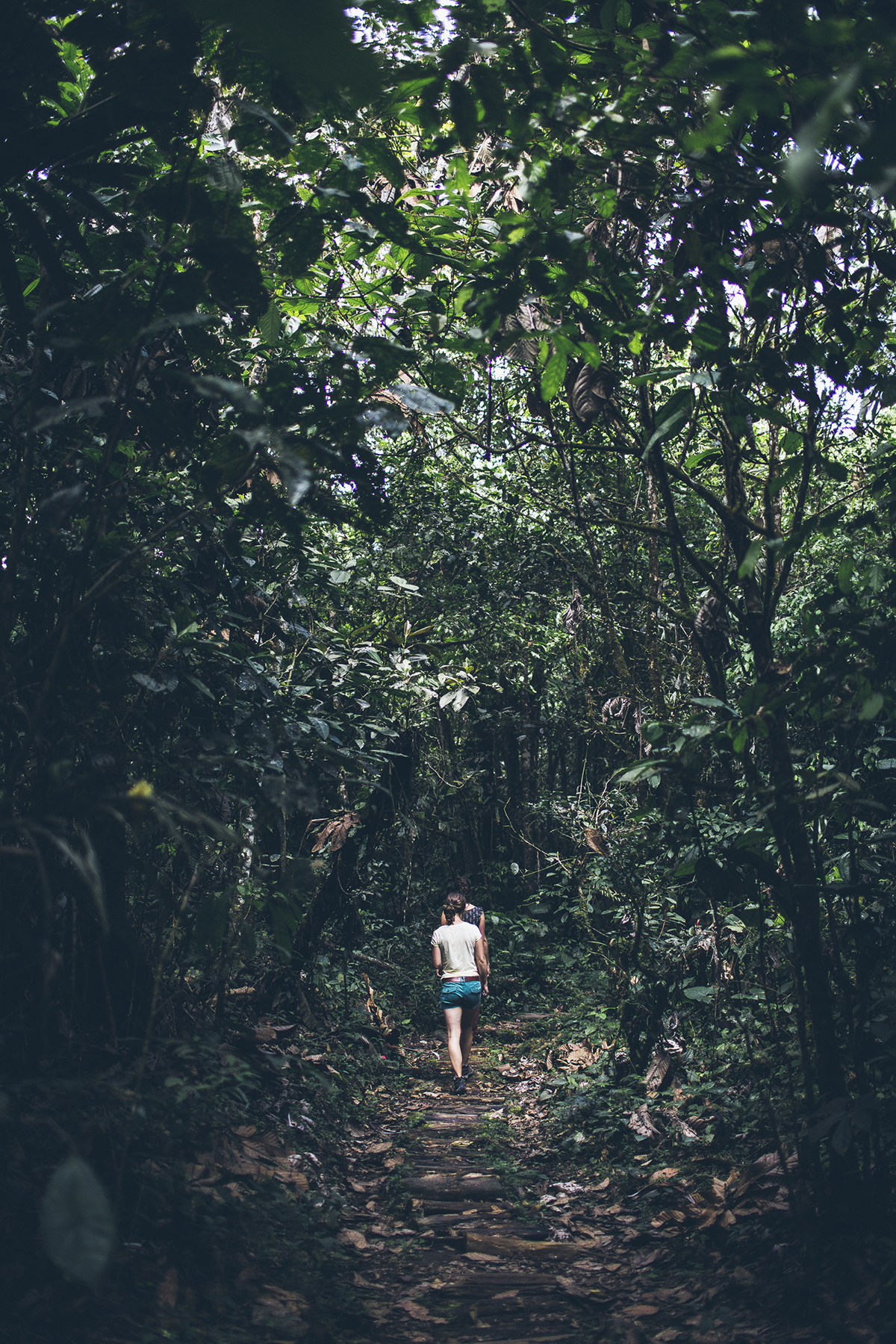 Our day trip to Puyo involved our first interaction with the local Ecuadorian transportation system. Originally, when I was researching the Banos area in my Lonely Planet guide the author strongly recommended renting bikes in Banos and riding them along the road to Puyo, where we could catch a bus and take the easy (bus powered) way back. The guide described this difficult but rewarding ride with spectacular scenery along the way, complete with many waterfalls. Let me tell you something. The author apparently was completely insane because nobody in their right mind would ever want to ride this road on a bike. The road has no shoulder to ride on, is very narrow and windy, the bus drivers are crazy, and then only reason that the rest of the drivers seem sane is because we were comparing them to the speed and lunacy of the bus drivers. And in rainy season… yeah, what a mess.

We took a bus to Puyo and thought that was dangerous enough that by the time we made it back to the truck alive it was time for a celebration drink. That and the fact that while we were a aboard the death-bus they happened to have a horror flick playing on the television which made us appreciate that we were: #1. No longer shooting across the stratosphere at 100 km/hour; and #2. Nobody thus far on our trip had cut up our bodies into little pieces and put them in a cardboard box or grocery bag.

‘Banos’ is Spanish for ‘baths’ (not bathroom as we originally thought…), which is reflected by the famous hydrothermal springs in the area.  Water is definitely a common element in the area: rivers, thermal pools, waterfalls, rain, and landslides.  We could see dozens of brown muddy sections on the side of the mountains where the land just fell away and into the valley below.  We decided to visit a few of the popular waterfalls near our campground where we felt the mighty power of the rushing water fall past us.  At Pailon del Diablo we scrambled through some claustrophobia inducing rock tunnels and watched the Ecuadorian tourists take a million selfies. 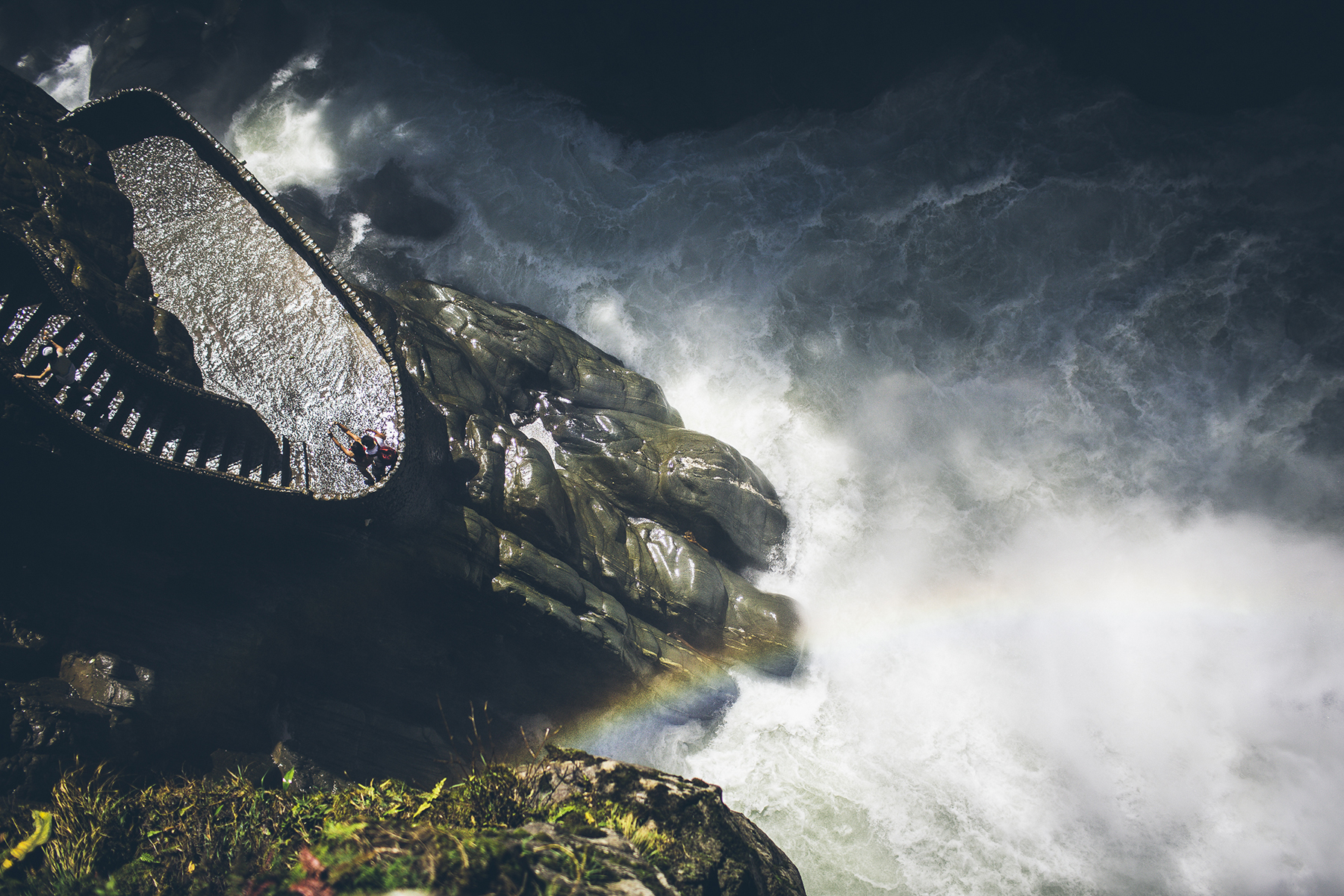 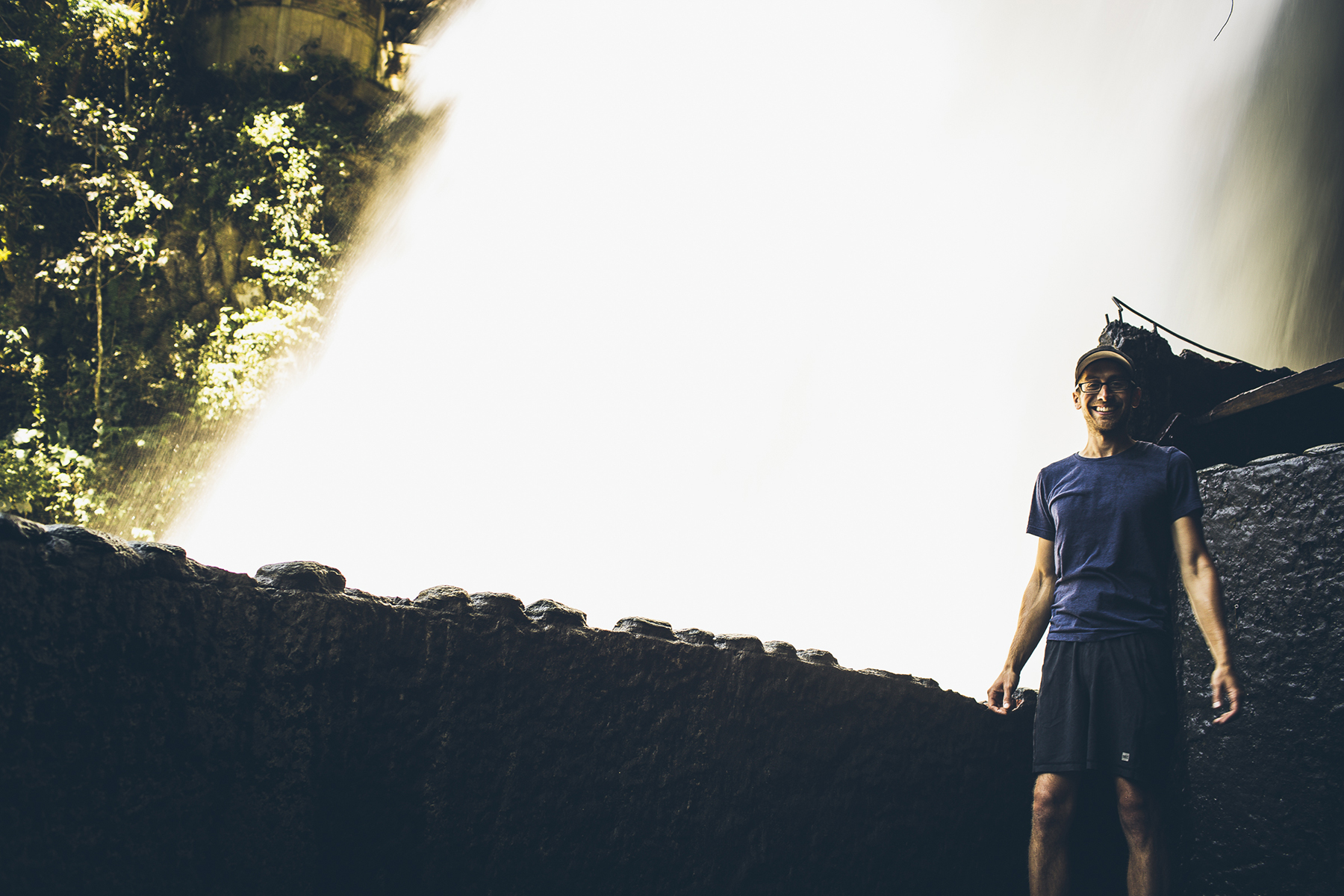 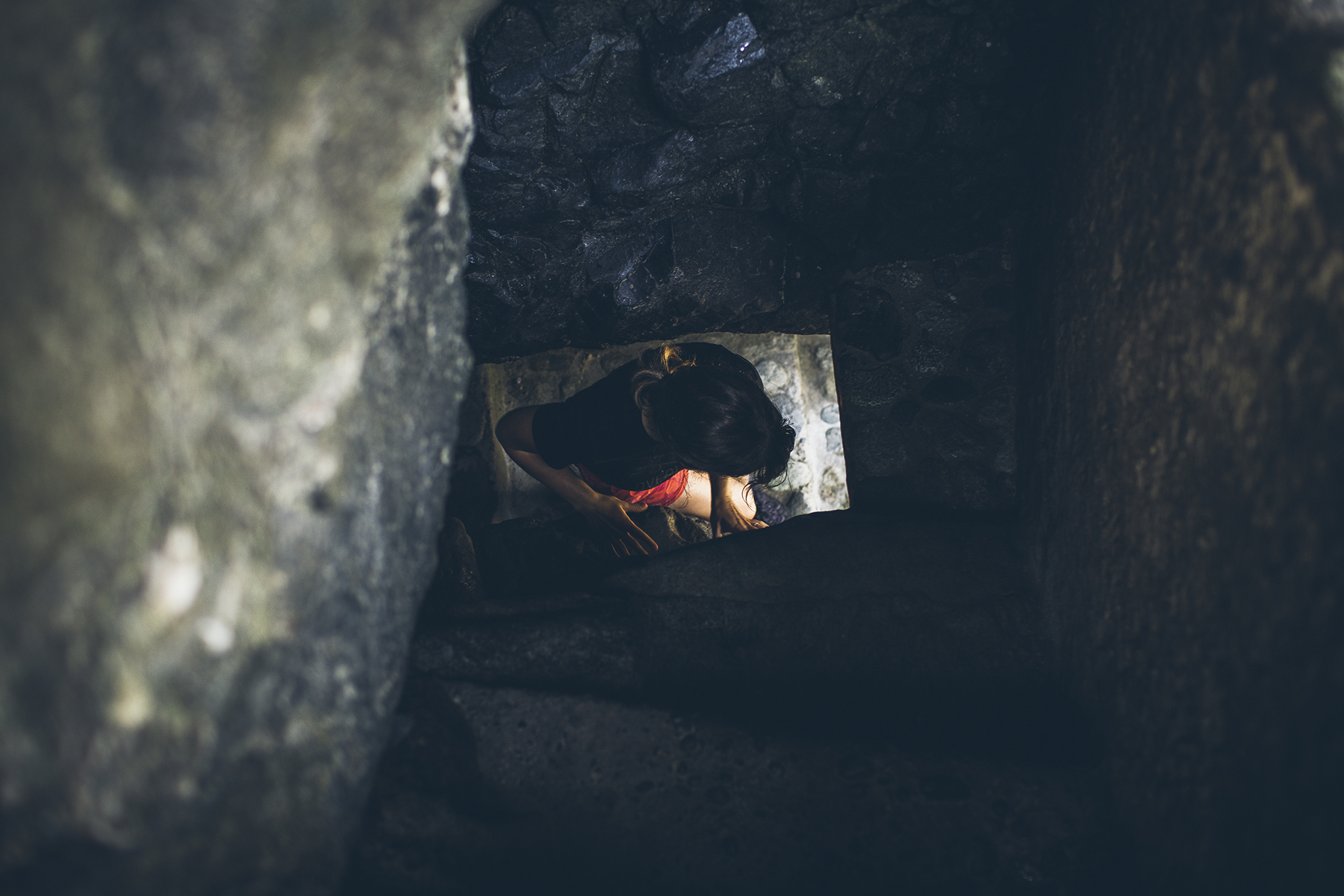 At the Machay Waterfall we descended an iron staircase to a quiet and peaceful river where we took in the views. 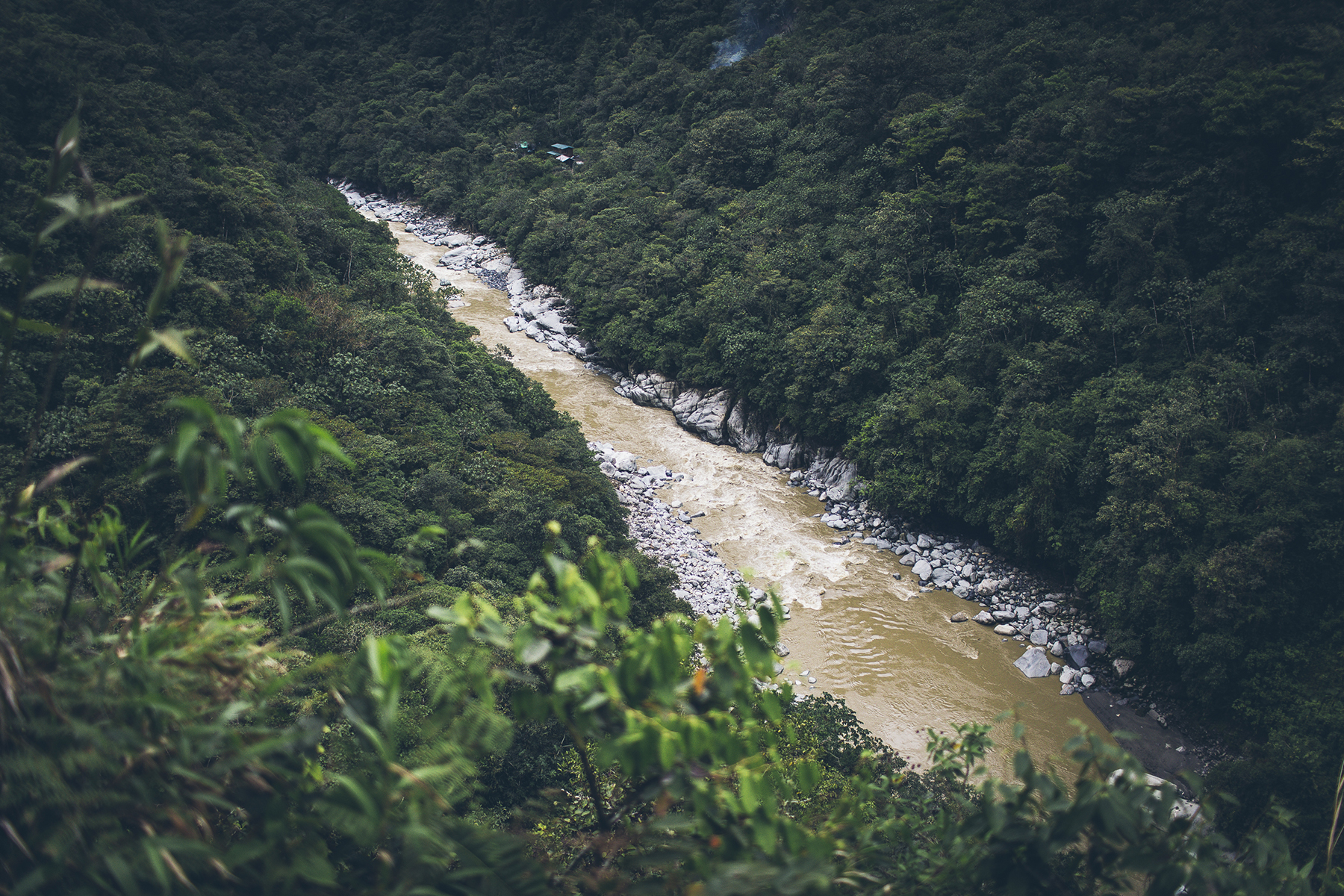 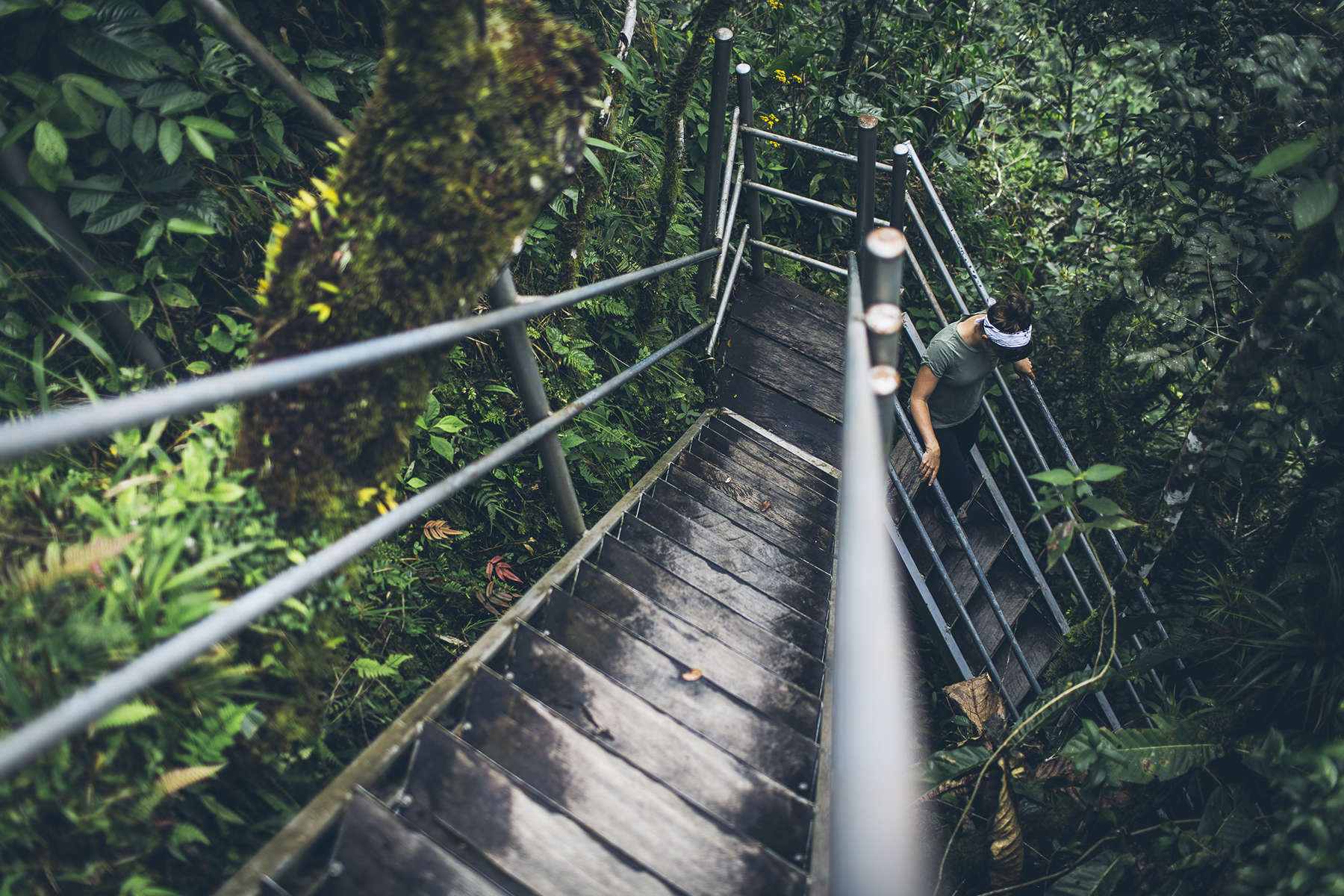 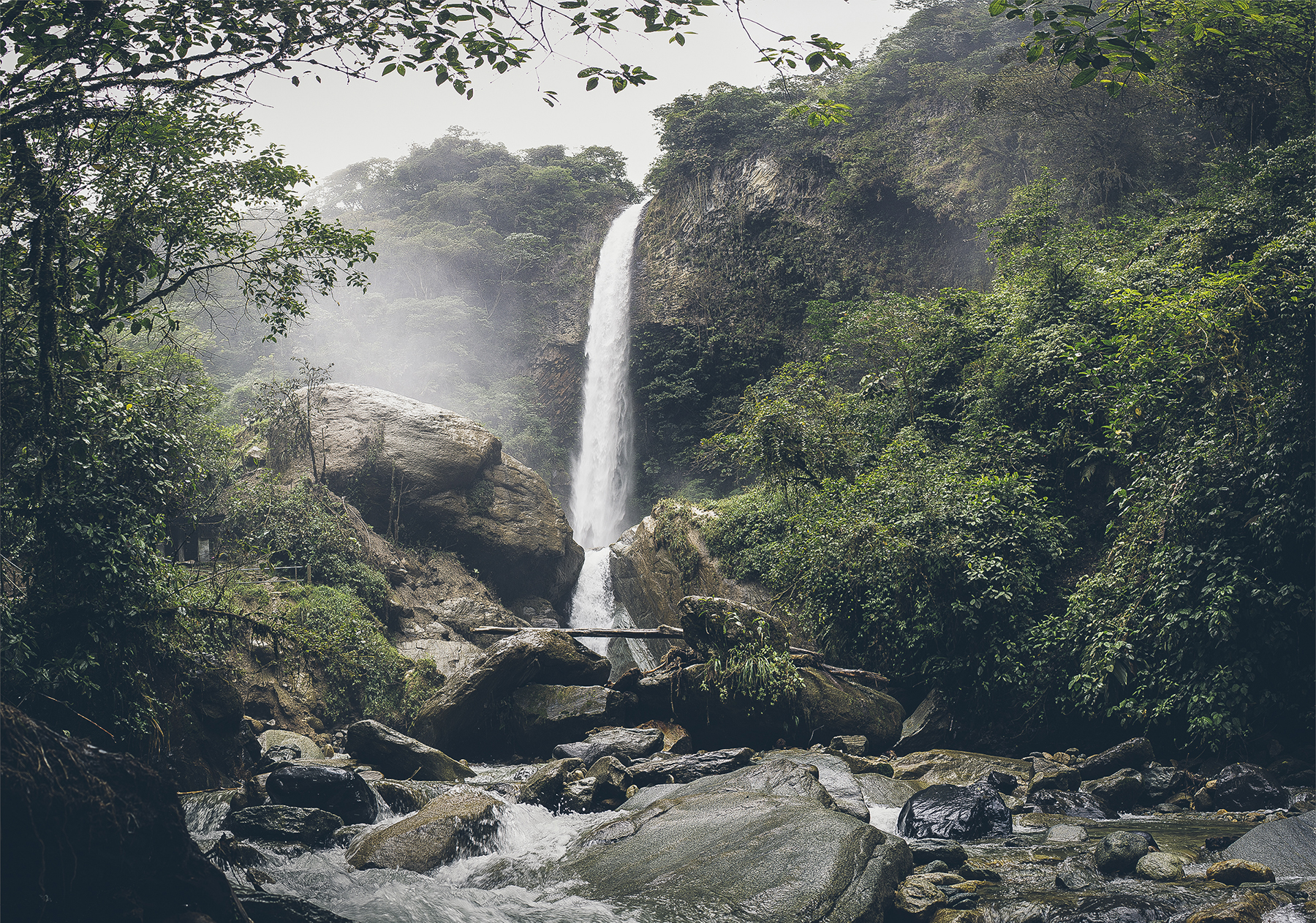 The last stop for us before we headed back up to 13,000 feet or higher was La Casa Del Arbol, a tourist trap treehouse and swing combination where you can take photos and appear to be swinging over the edge of the world.  Despite its extreme cheesiness, there is a sort of glee you feel on a massive swing.  Both Richard and I walked away with silly grins on our faces and a bounce in our step, like we were kids again.

Do yourself a favor and explore Baños and the Cloud Forest of Ecuador. It’s worth the drive! 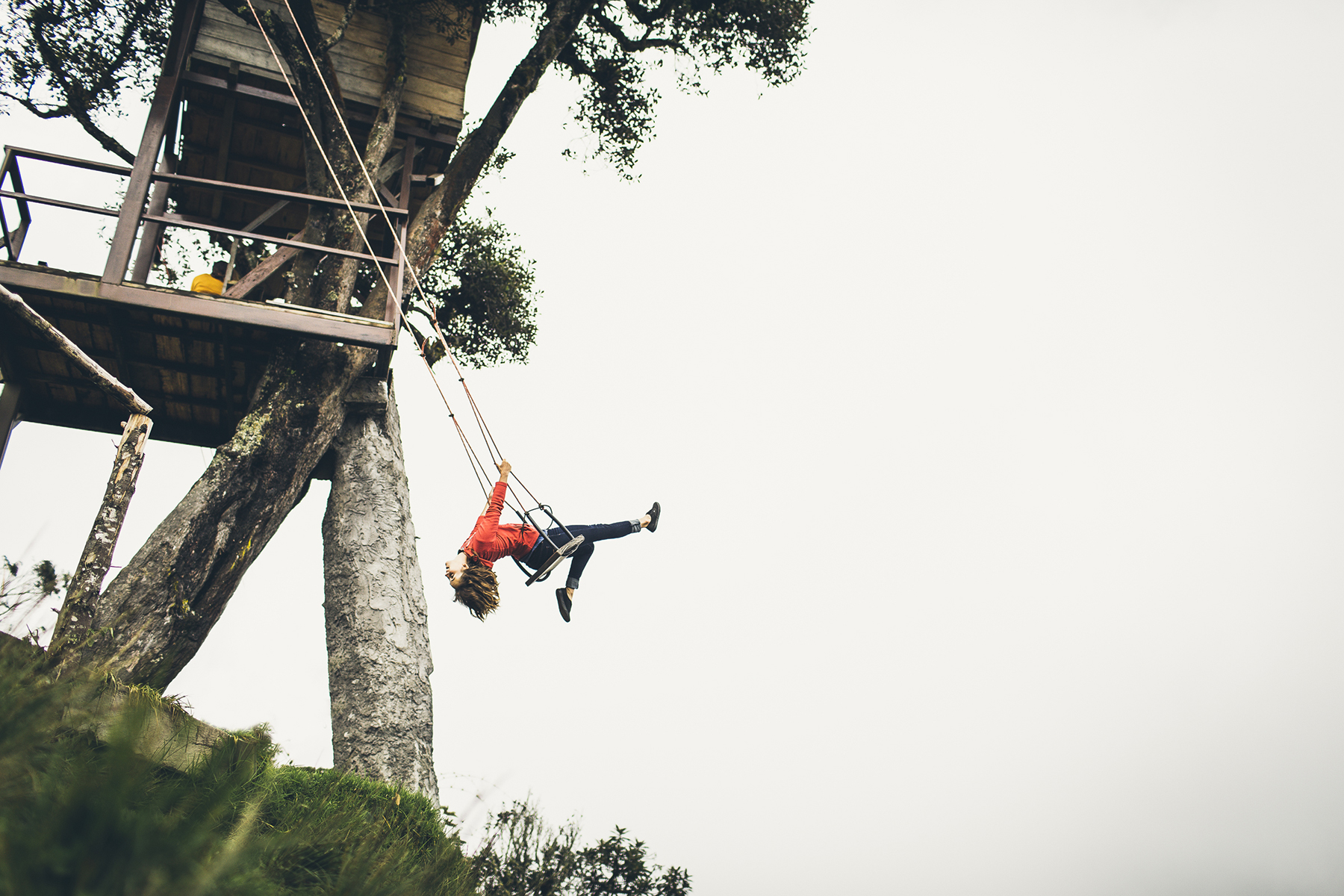 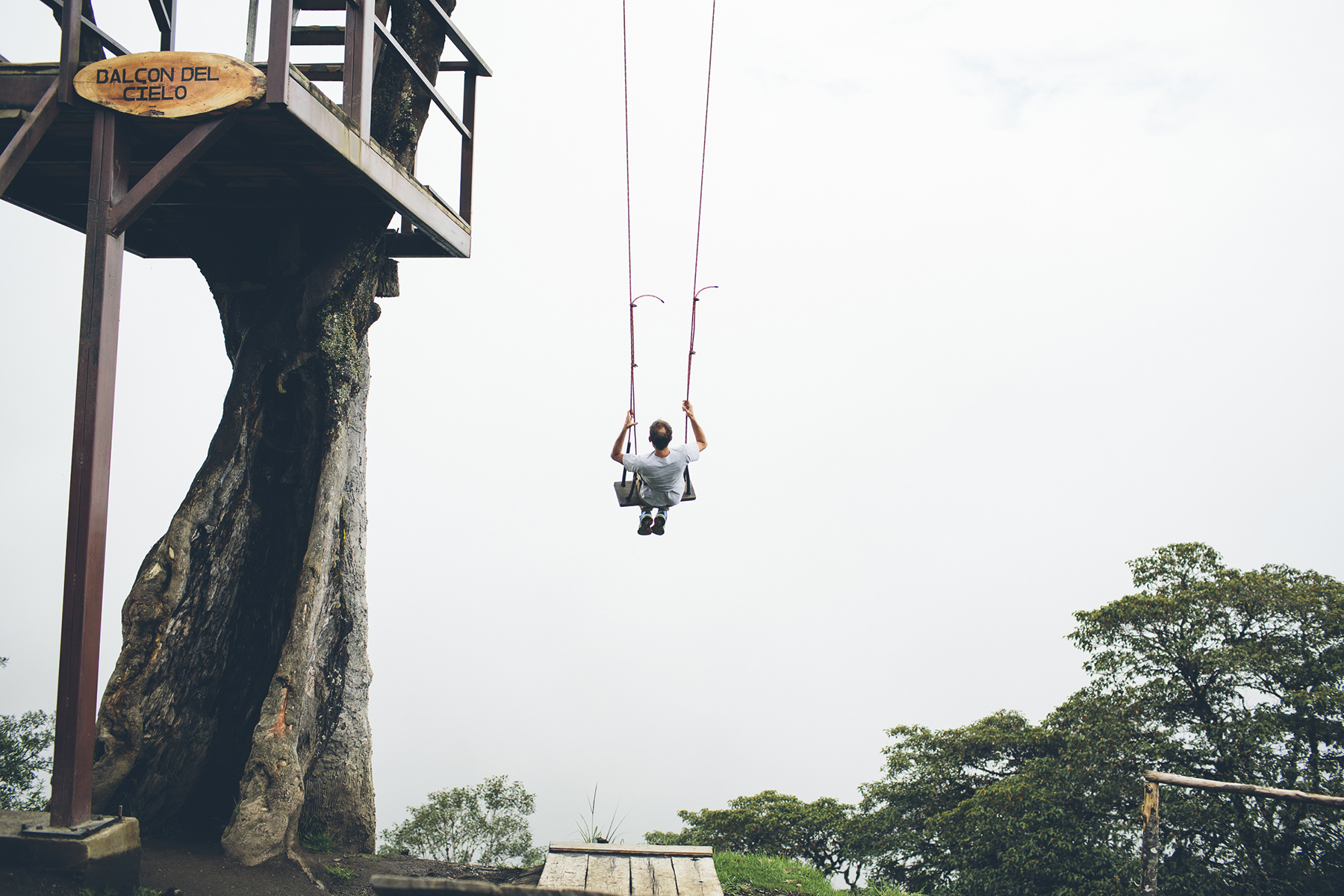 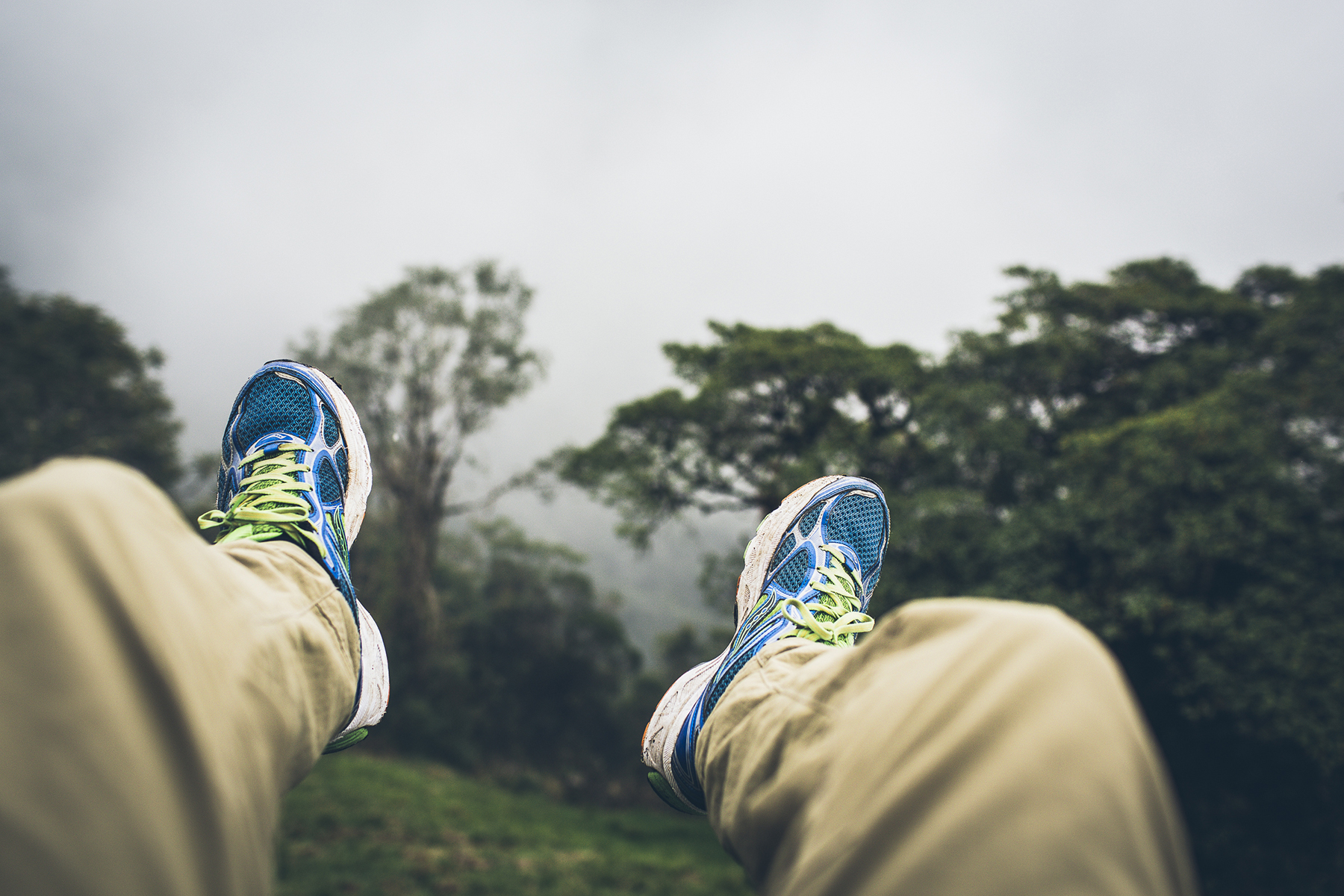 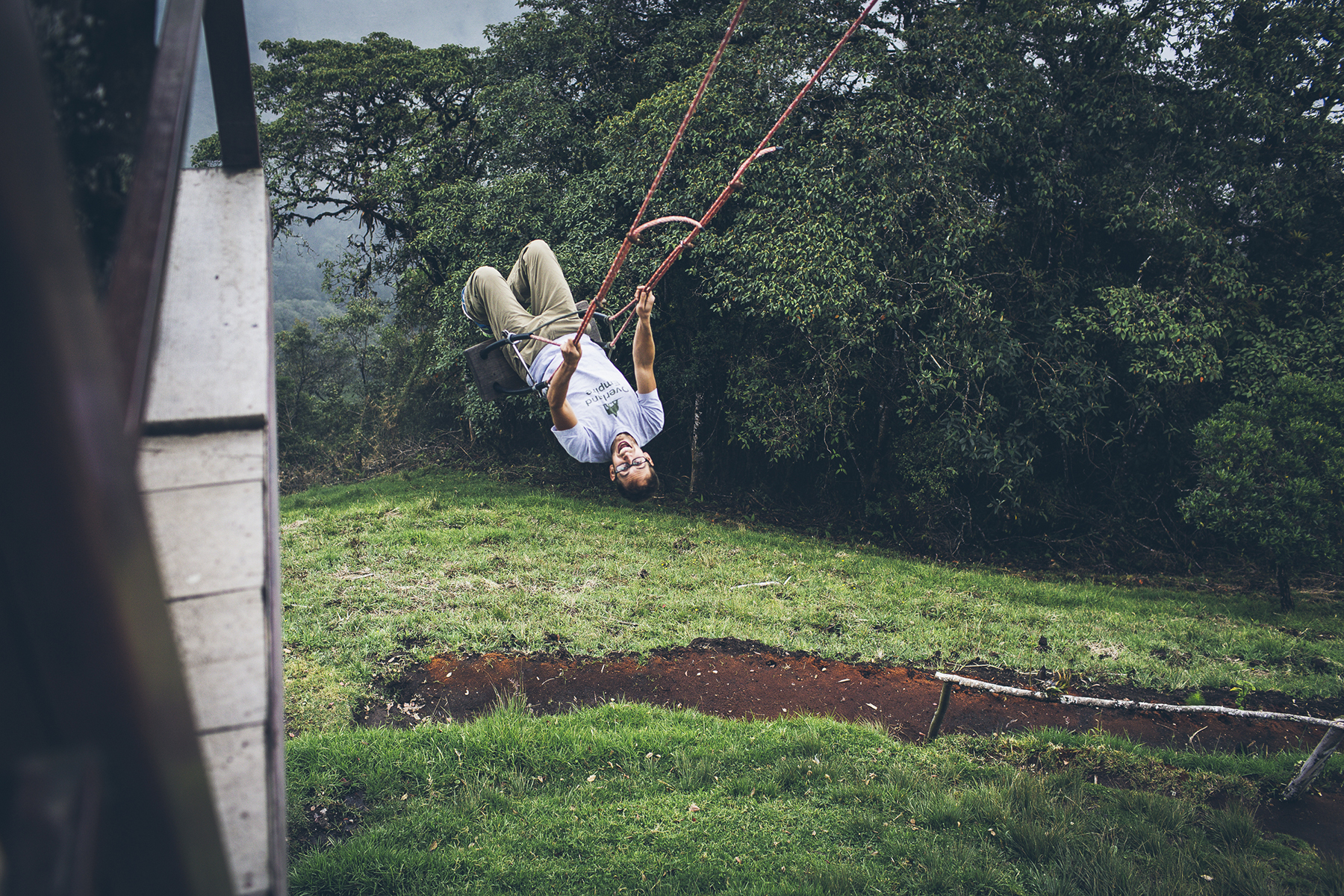