After two weeks in the Cordillera Blanca we regretfully headed towards Lima.  Regretfully, because we did quite a bit of hiking and exploring in the area, but it felt like we hadn’t even scratched the surface.  On our way to the Peruvian coast we stopped by the Hatun Machay Rock Forest, a well-known climbing spot.  There is a hut on site with a fireplace, large kitchen, and bunks upstairs for sleeping.  We camped outside and what a sweet spot!  The night was chilly but the cloudless sky revealed millions of twinkling stars. 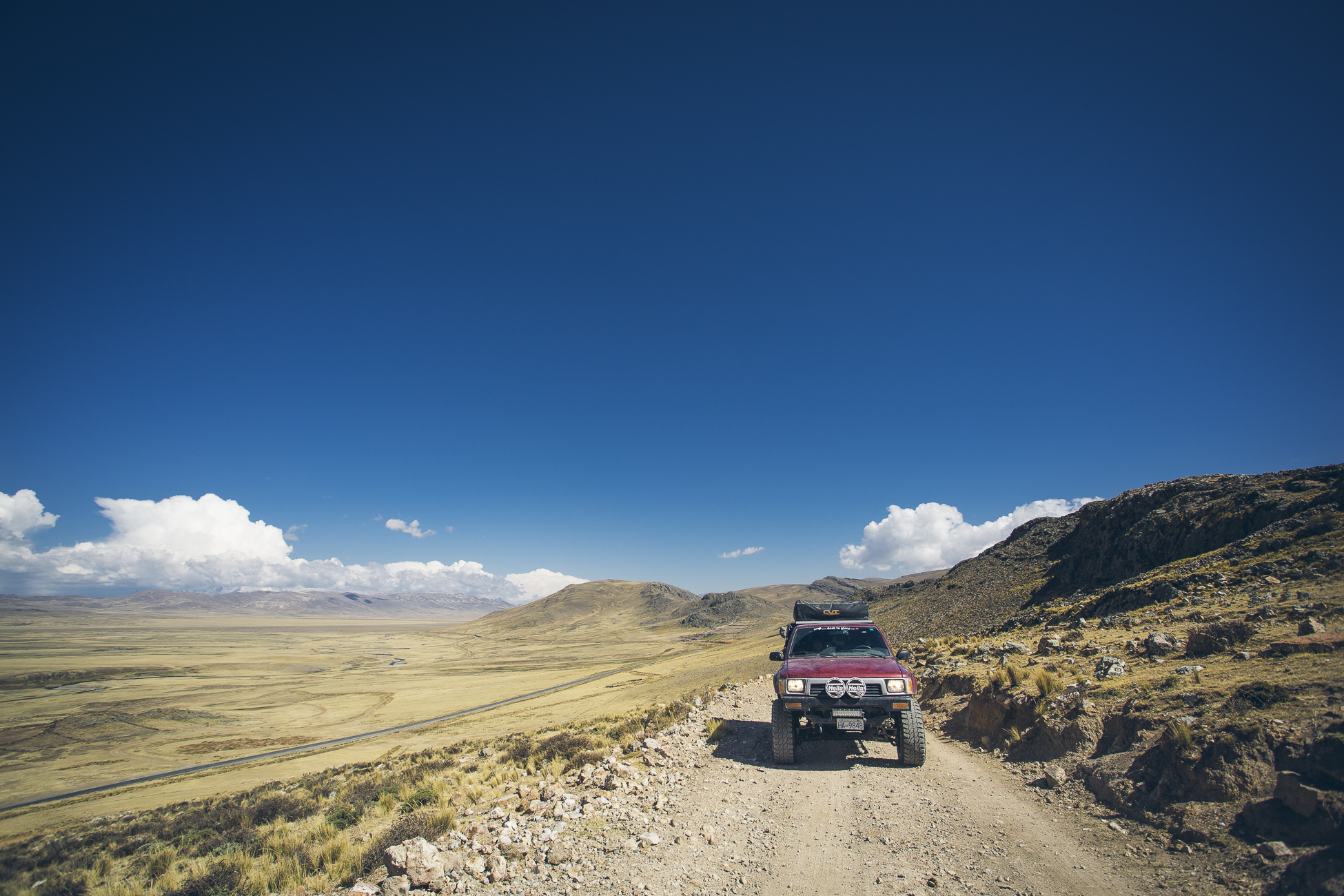 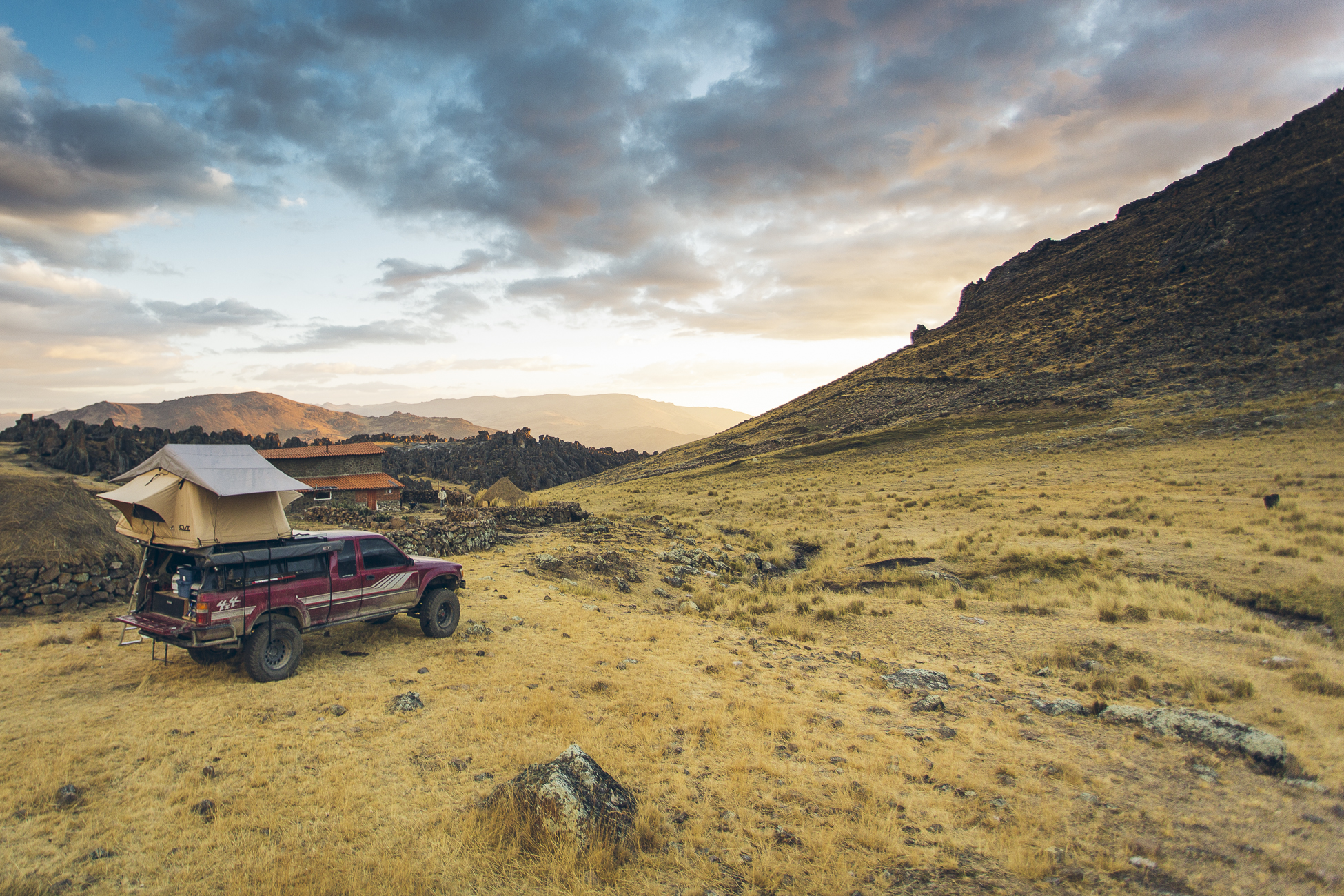 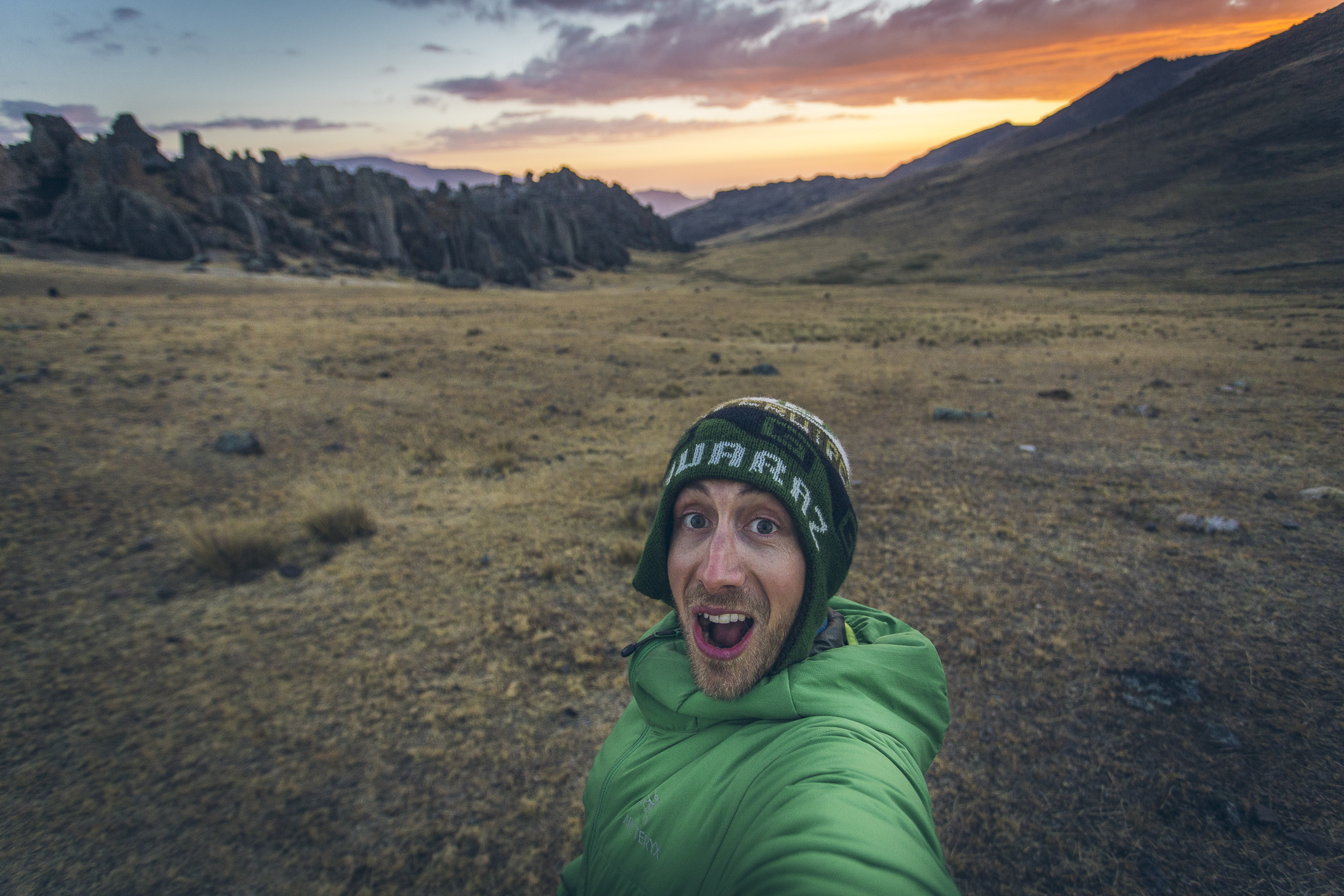 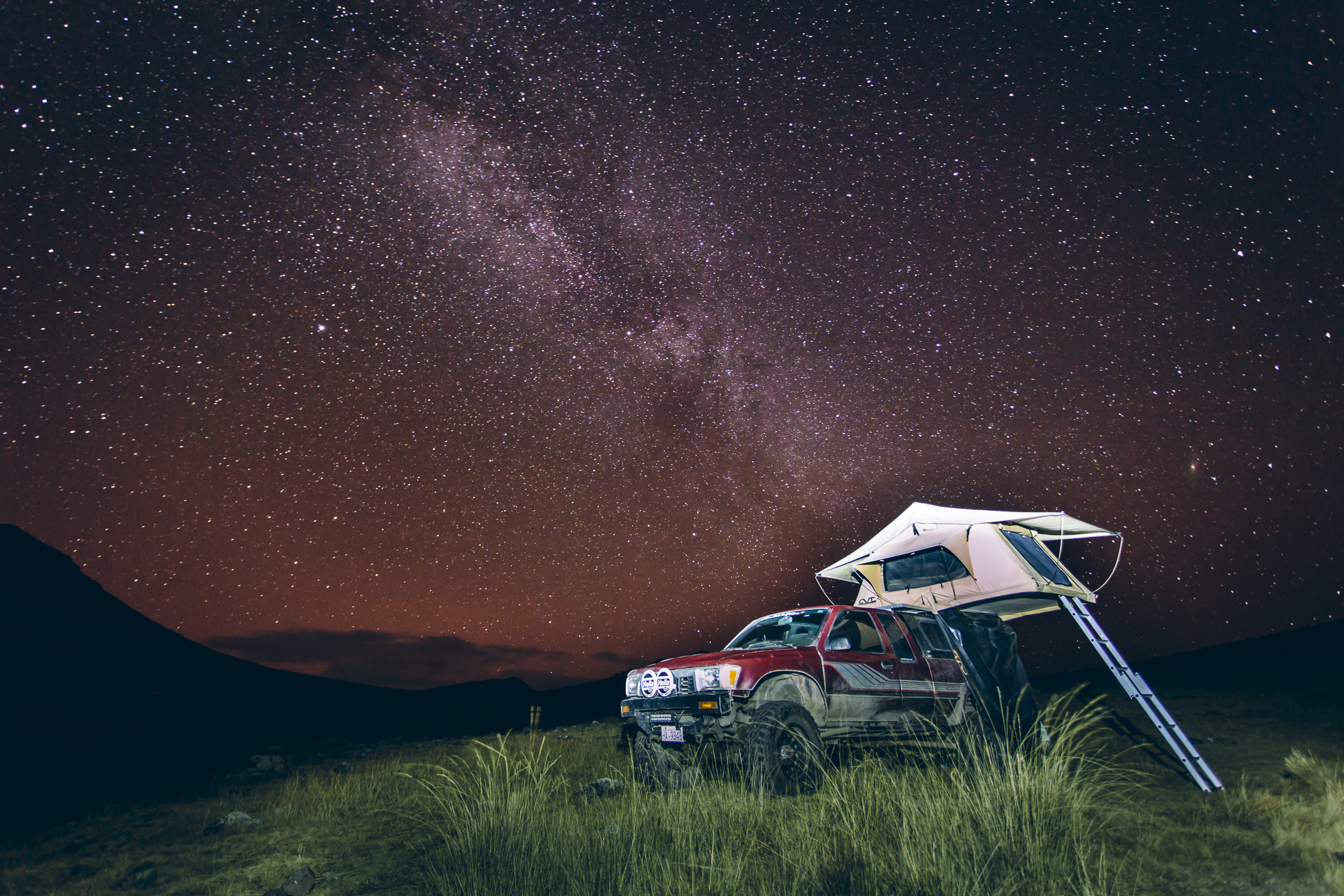 The next morning we ate breakfast while a massive flock of sheep crossed through the grassy plains in front of us. To wake up with the sunrise, ice on the truck and tent, cozing up in our warm weather gear while sipping a hot beverage and watching the sheep run by… that was a moment of perfection we will remember forever. 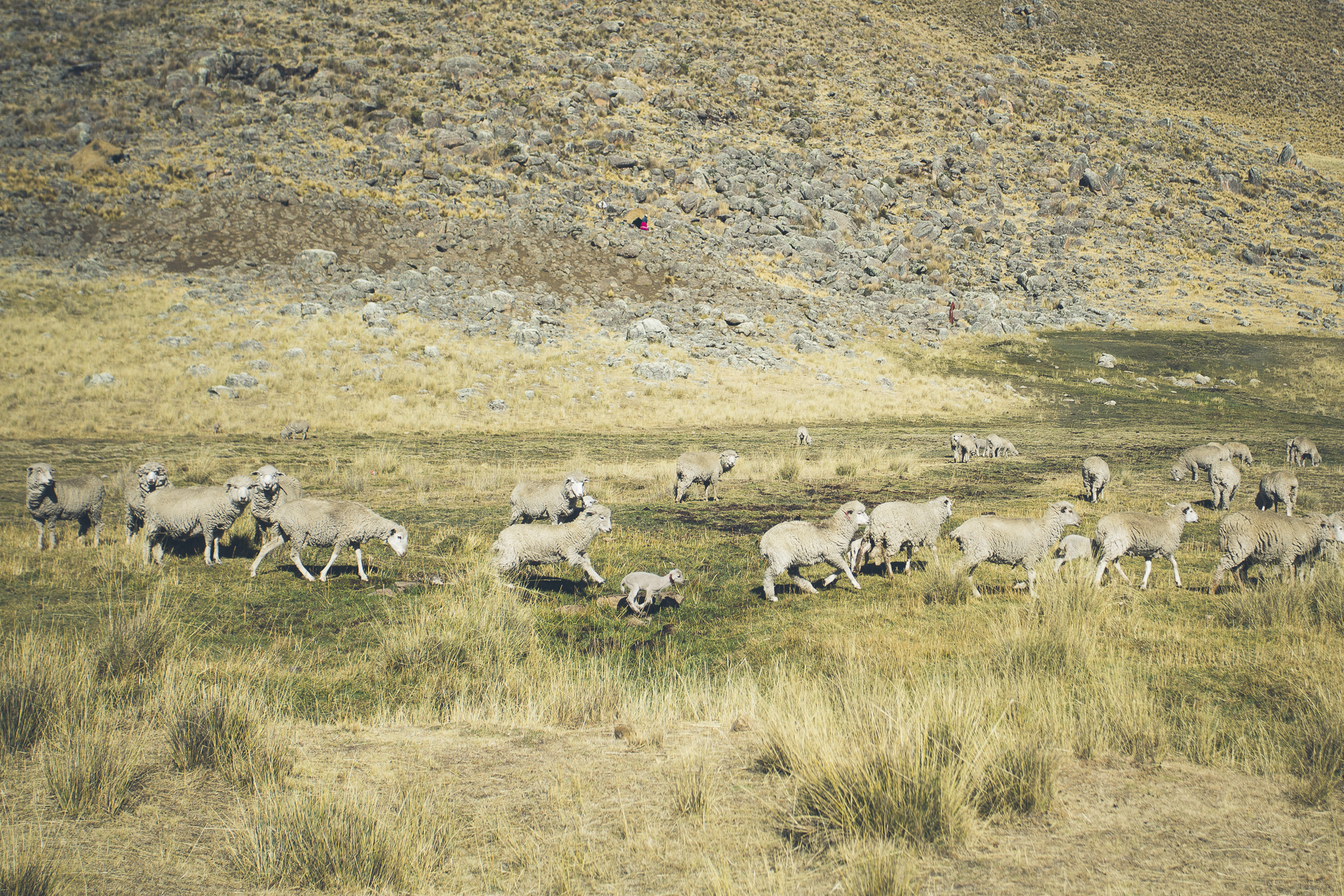 An iOverlander spot lead us to the dune-filled beaches of El Paraiso, where we hooned around exploring multiple covert-ish seaside spots, drove up dunes with the country music blaring and windows rolled down, and ran up and down the sandy mounds with the wind blowing our hair everywhich way. 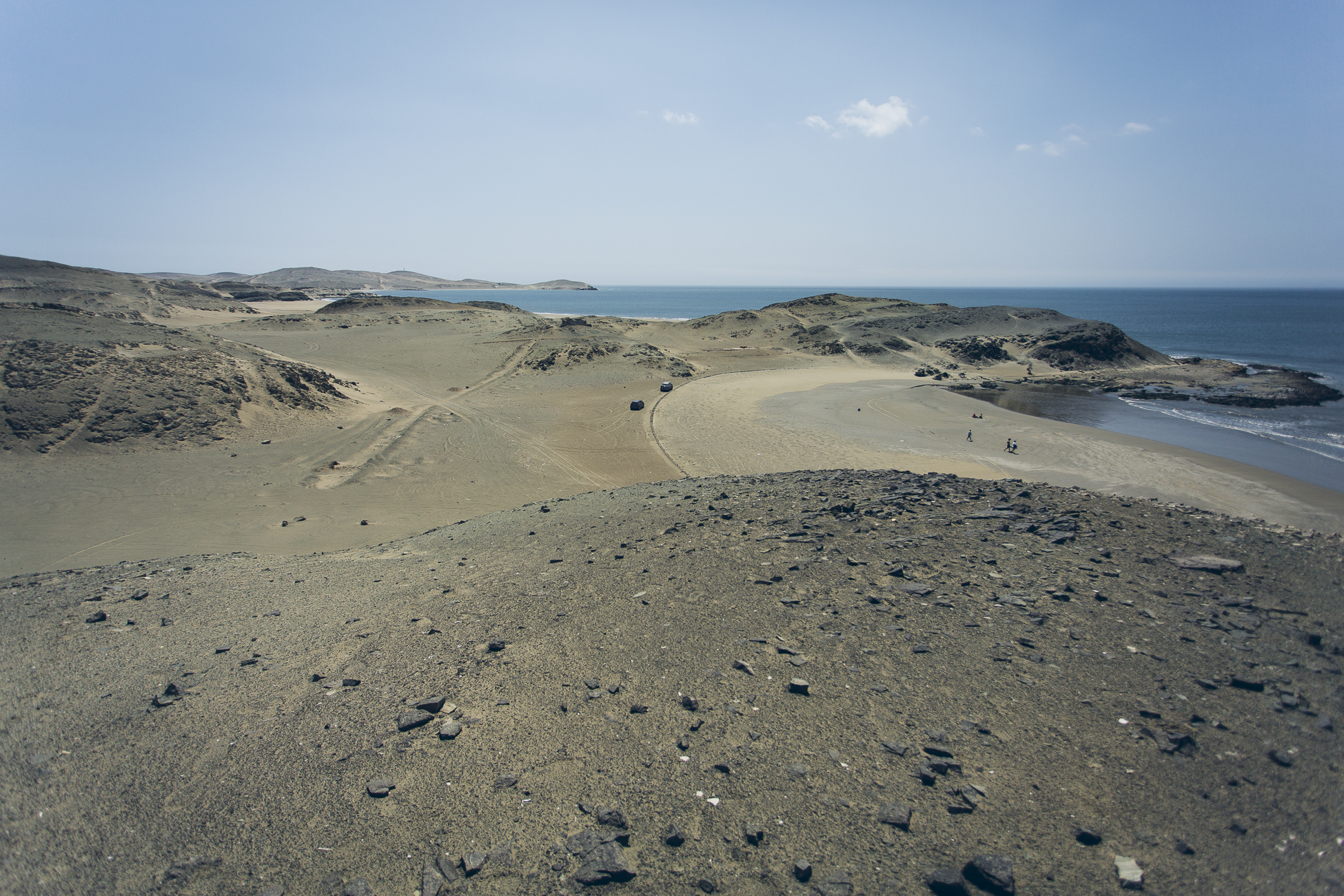 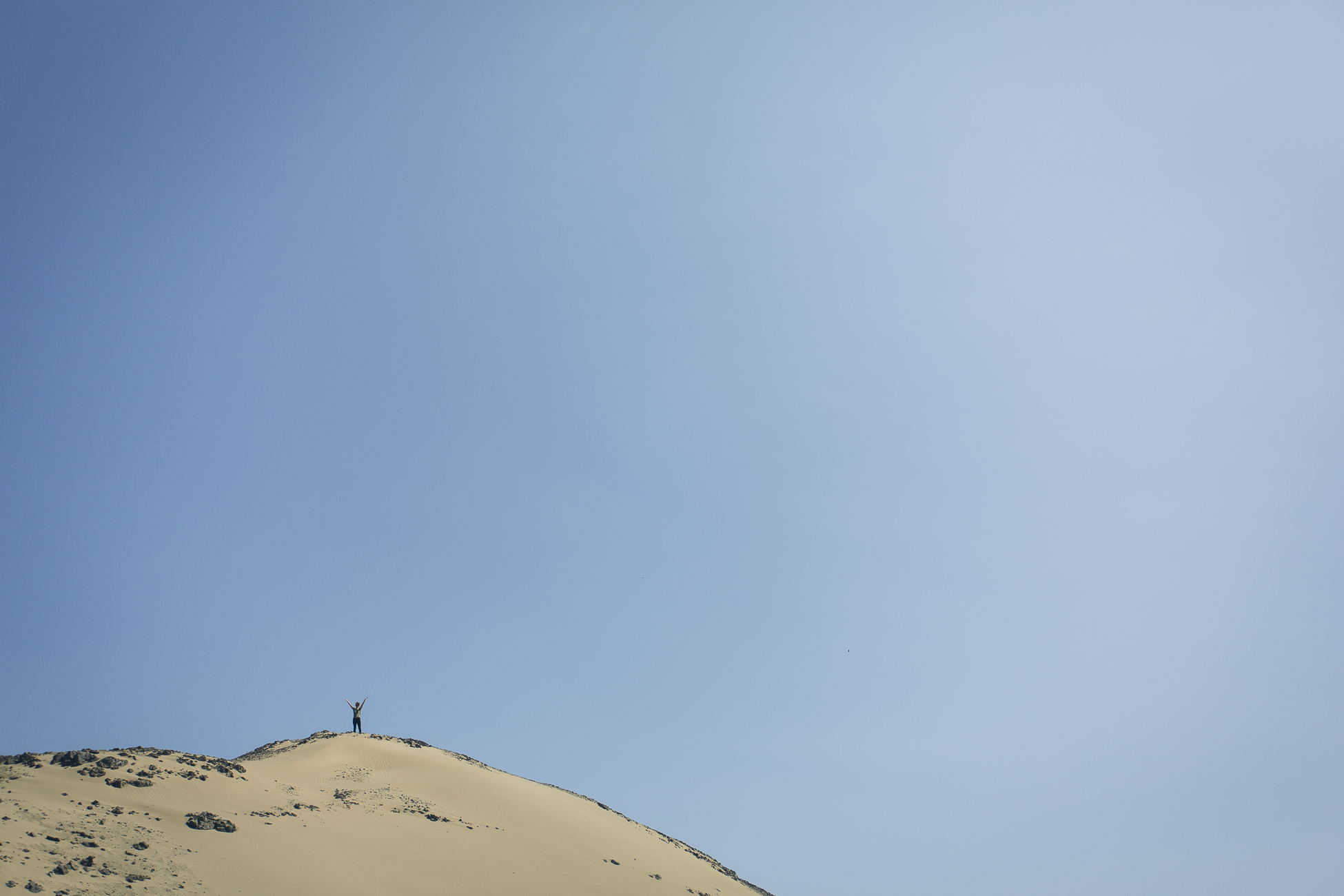 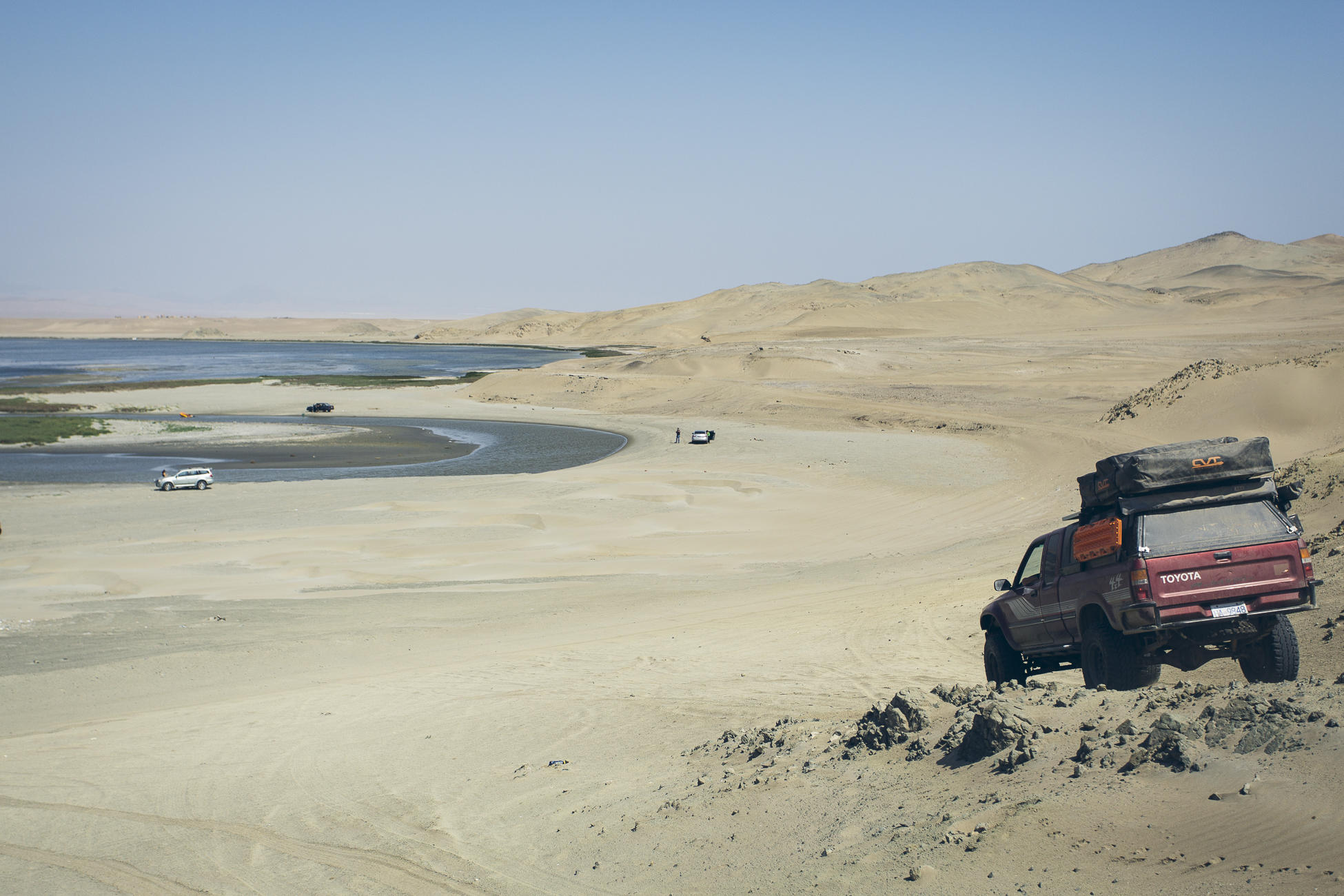 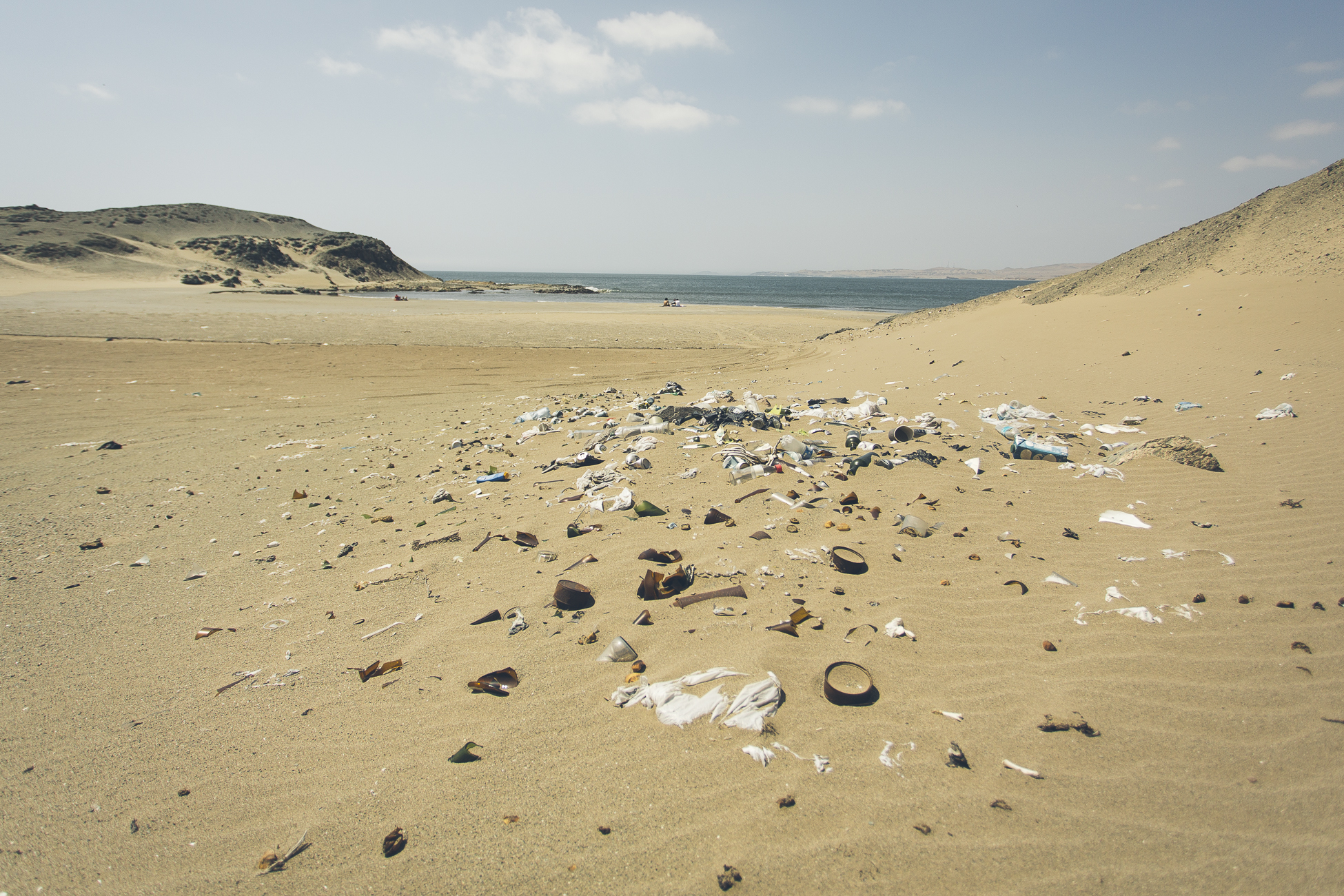 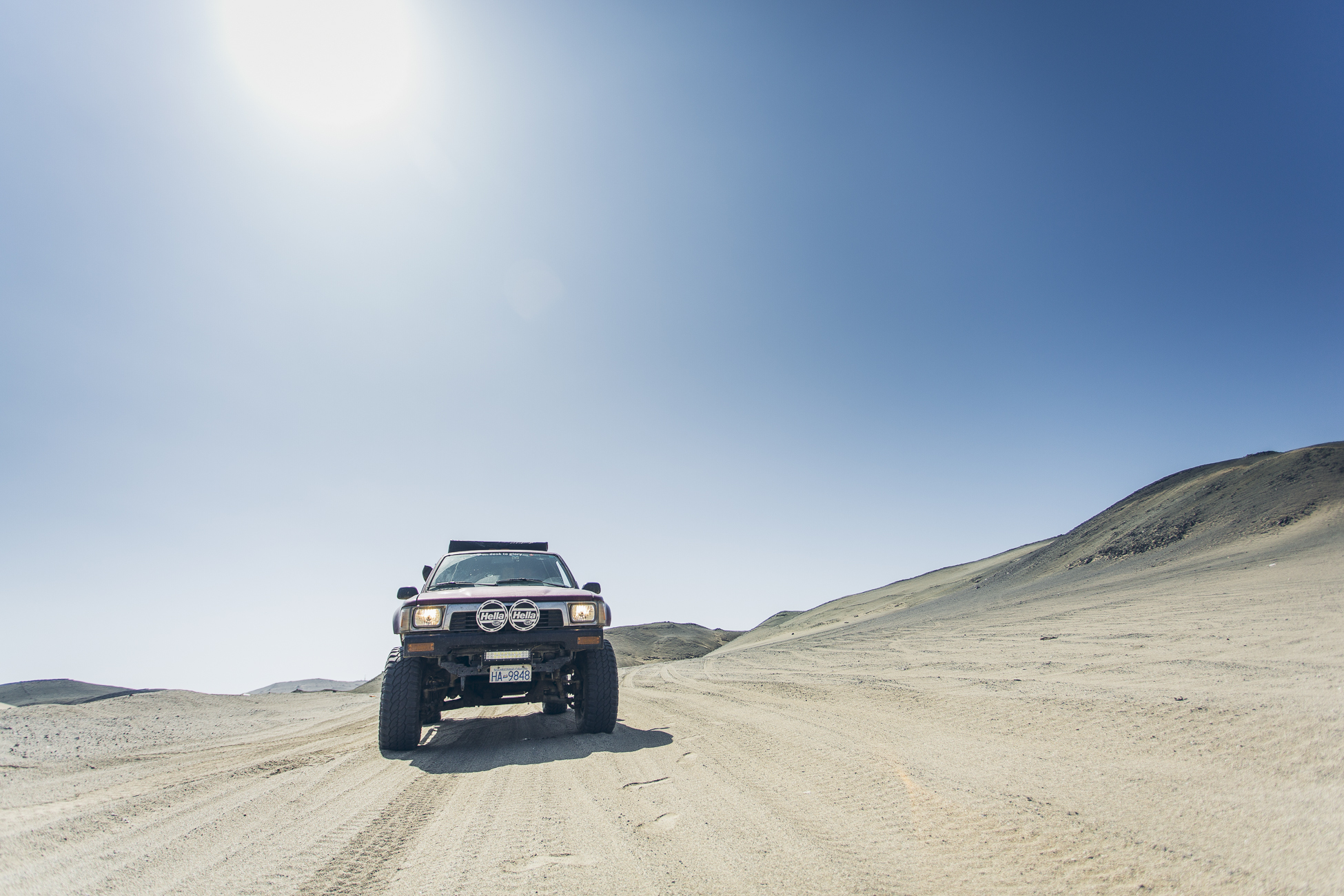 Unfortunately the wind was pretty strong, so instead of putting our roof top tent up like a sail, we continued to the Lomas de Lachay Reserve to find a more sheltered camping spot.  Well that decision sucked.  After paying a hefty entrance fee, we discovered that the reserve was completely overcrowded with weekending locals and massive swarms of flies.  The “toilet situation” was abysmal.  The combination of a squat toilet and people who can’t aim really made the toilet an unpleasant place to visit.  We thought a quick hike would raise our spirits as the park is quite well known for its Dr. Suess-like scenery.  If you’re into one shade of grey this hike would have been great.  Clouds shrouded… well, everything.  We literally only saw the path we were walking on.  The neat thing though was the drive up to the park.  In the midst of hundreds of kilometres of desert, there lies a green expanse of thriving plant material.  Mother nature, you are crazy awesome… despite the flies. 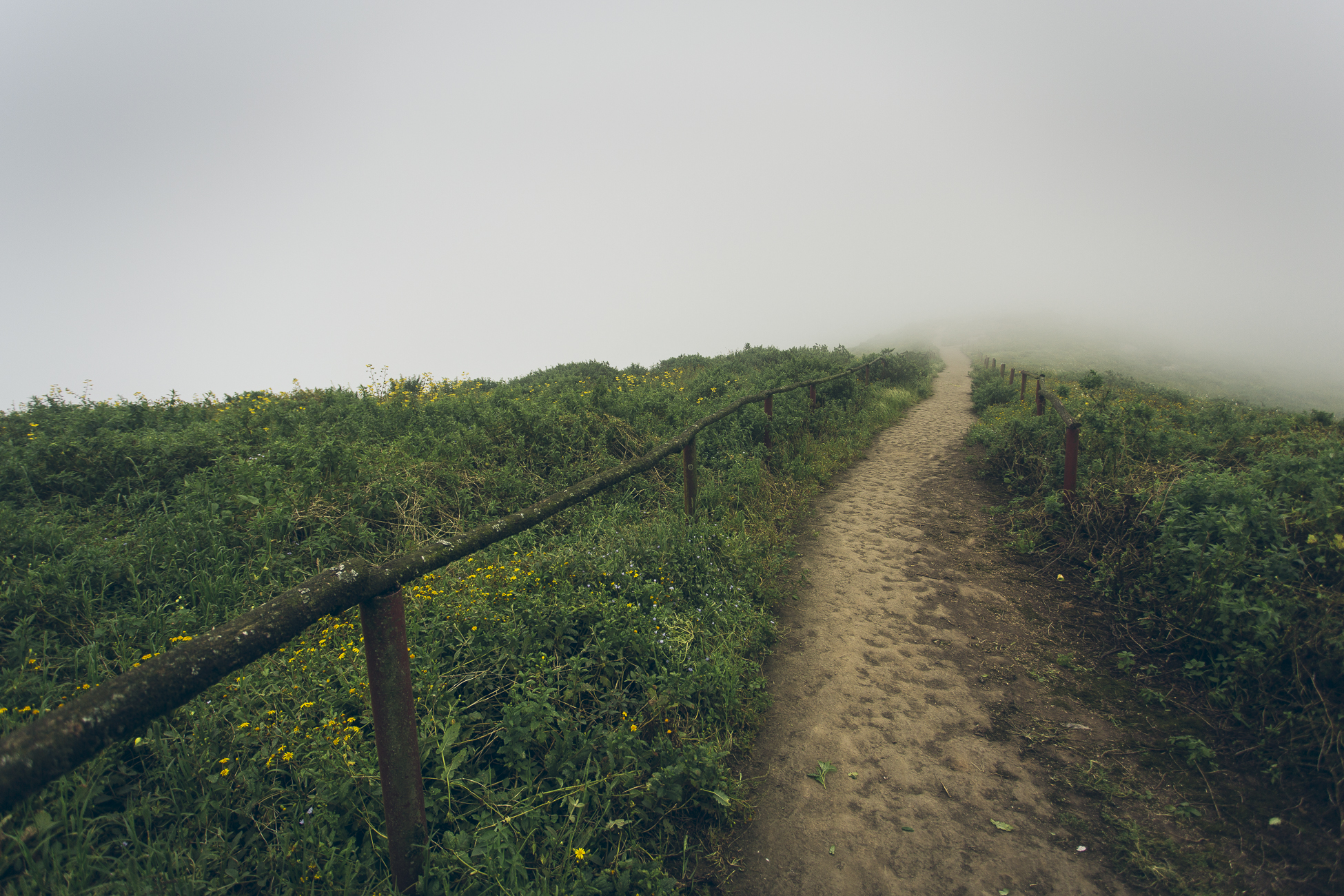 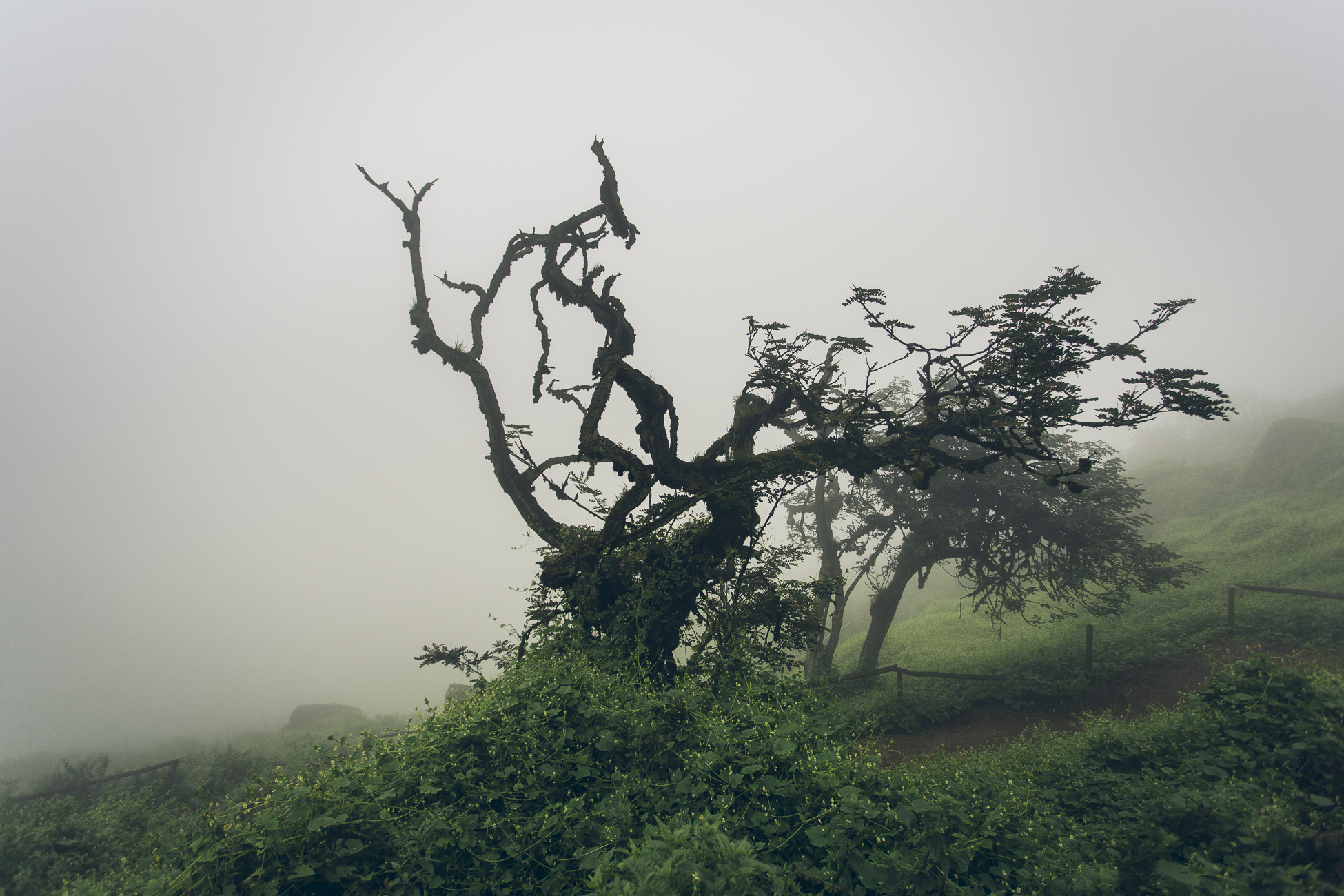 Next up: Lima.  Lima has a bit of a reputation for bad traffic. “The traffic is crazy! Don’t go if you don’t need to!” This is what many people said to us.  When we arrived, we actually didn’t think it was that bad. Cars were moving. Nobody was driving too erratically. There was some semblance of organization.  We’ve had many, many worse driving days in Vancouver that’s for sure.  I think the trick was arriving on a weekend.  In any event, we made it to the Hitchhiker and Backpackers Hostel in one piece and in somewhat of a timely manner. 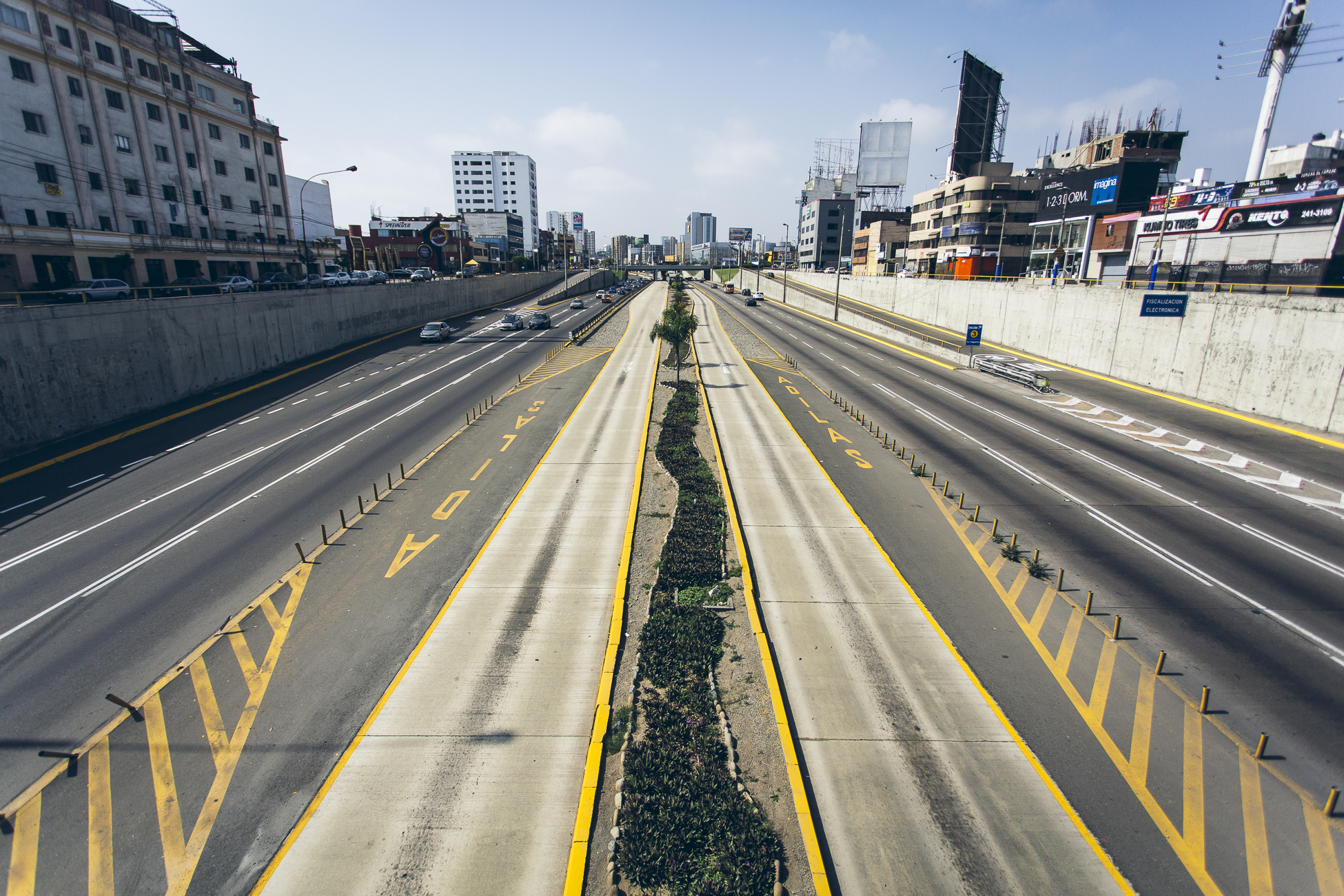 The high-end neighbourhoods of Lima that bordered the coastline reminded us of Vancouver. A busy walking and jogging path high above the water ran along the seashore and provided great views of the surfers and beach below. Parks with sculptures and palm trees dotted the walking paths. Paragliders leapt from the cliffs and soared atop the thermals rising from the ocean. Locals clad in stretchy pants and neon tops jogged, boot-camped, and stretched as far as the eye could see. We came upon a high-end open-air mall (“Larcomar”) along the walkway with gorgeous views and a ton of people dining, shopping, and perusing. This was culture shock at its finest.  There were many international tourists, and people were dressed so nicely – no scrubby t-shirts worn for multiple days in a row, no makeup-less faces or rumpled hair. We felt grubby and unkempt but mostly entertained by the whole experience. We had just wandered through cliff-side graves and tented with our possessions in a backpack for multiple days. Now we were thrown into the middle of consumerist culture again. Weird, really weird. 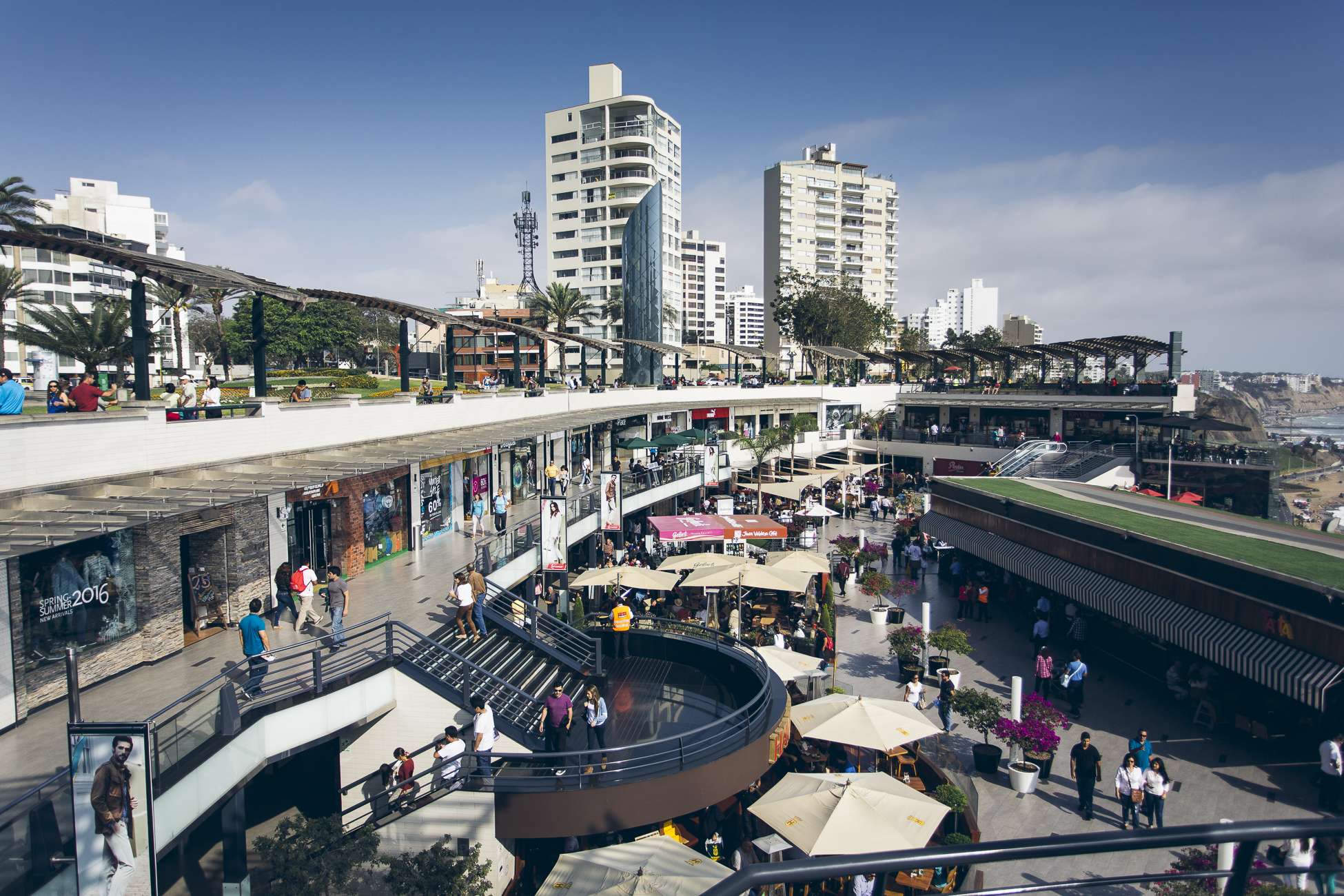 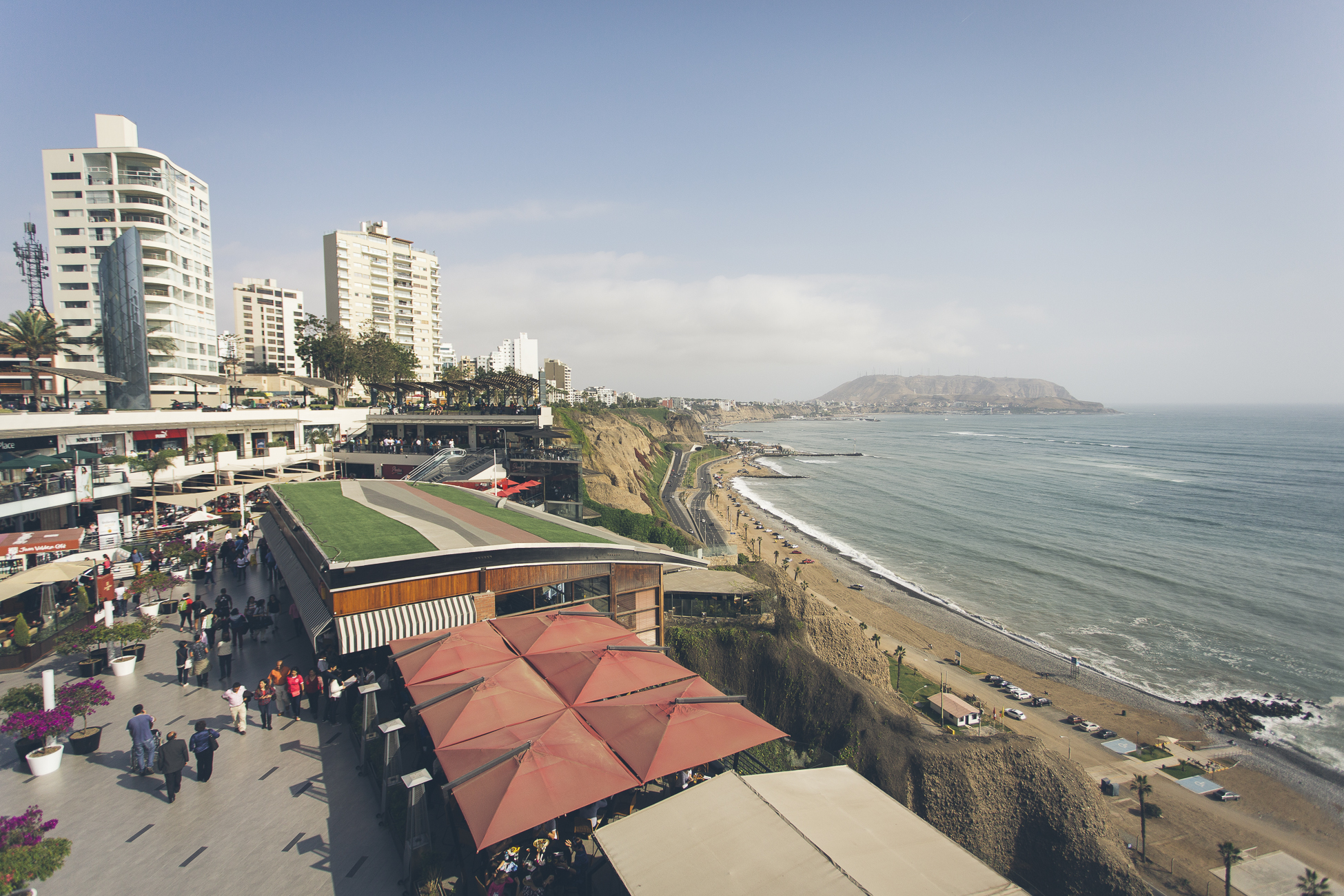 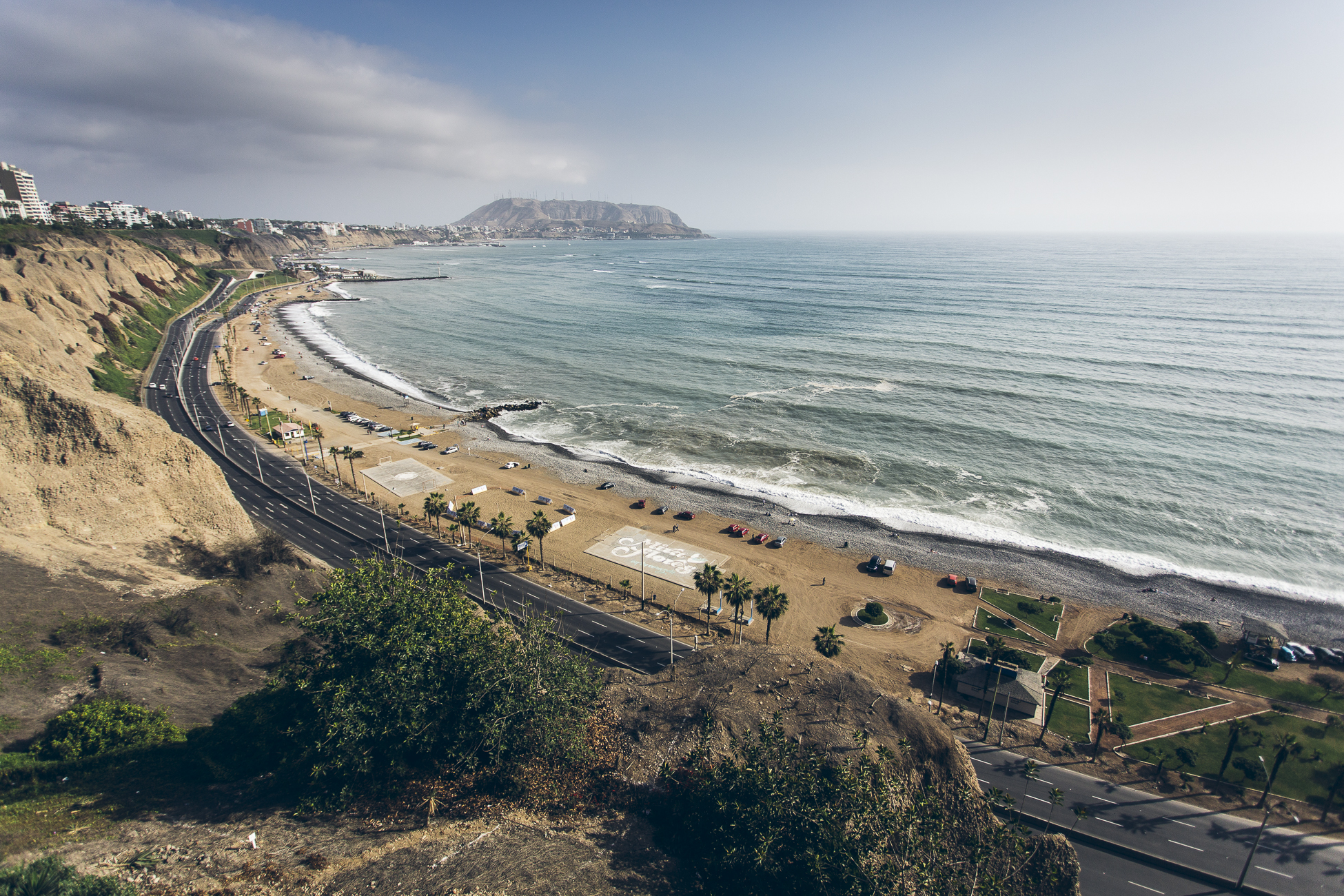 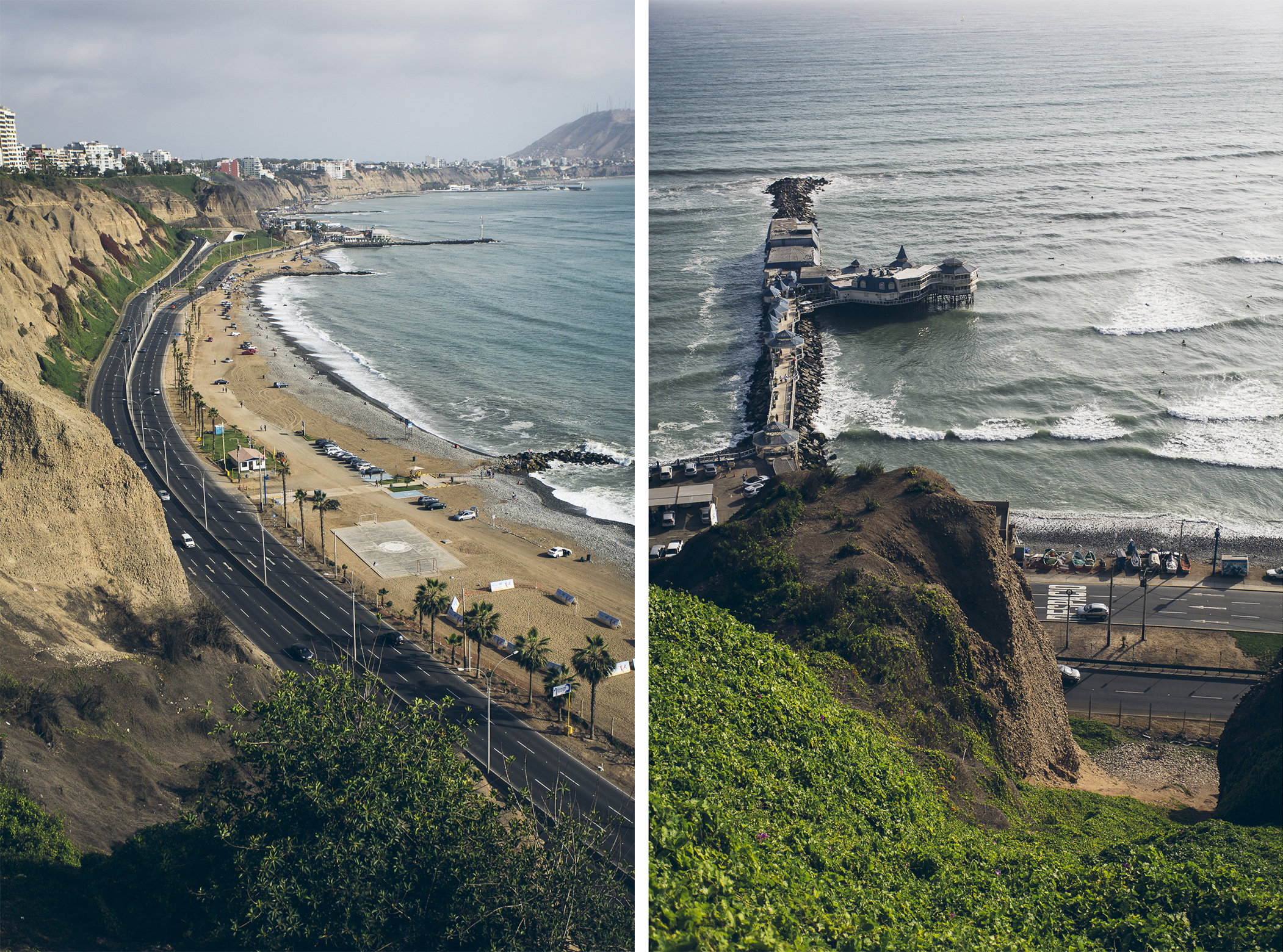 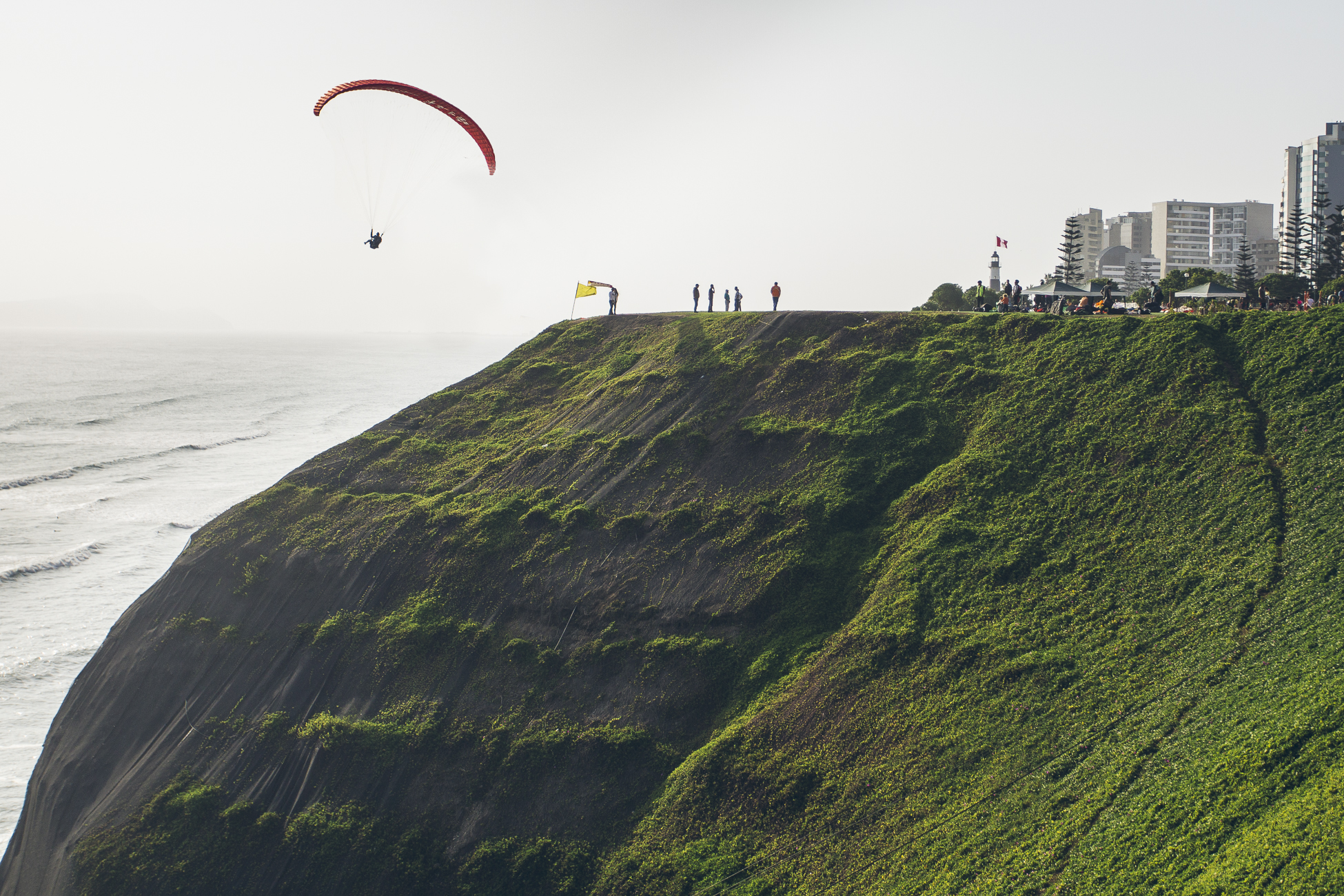 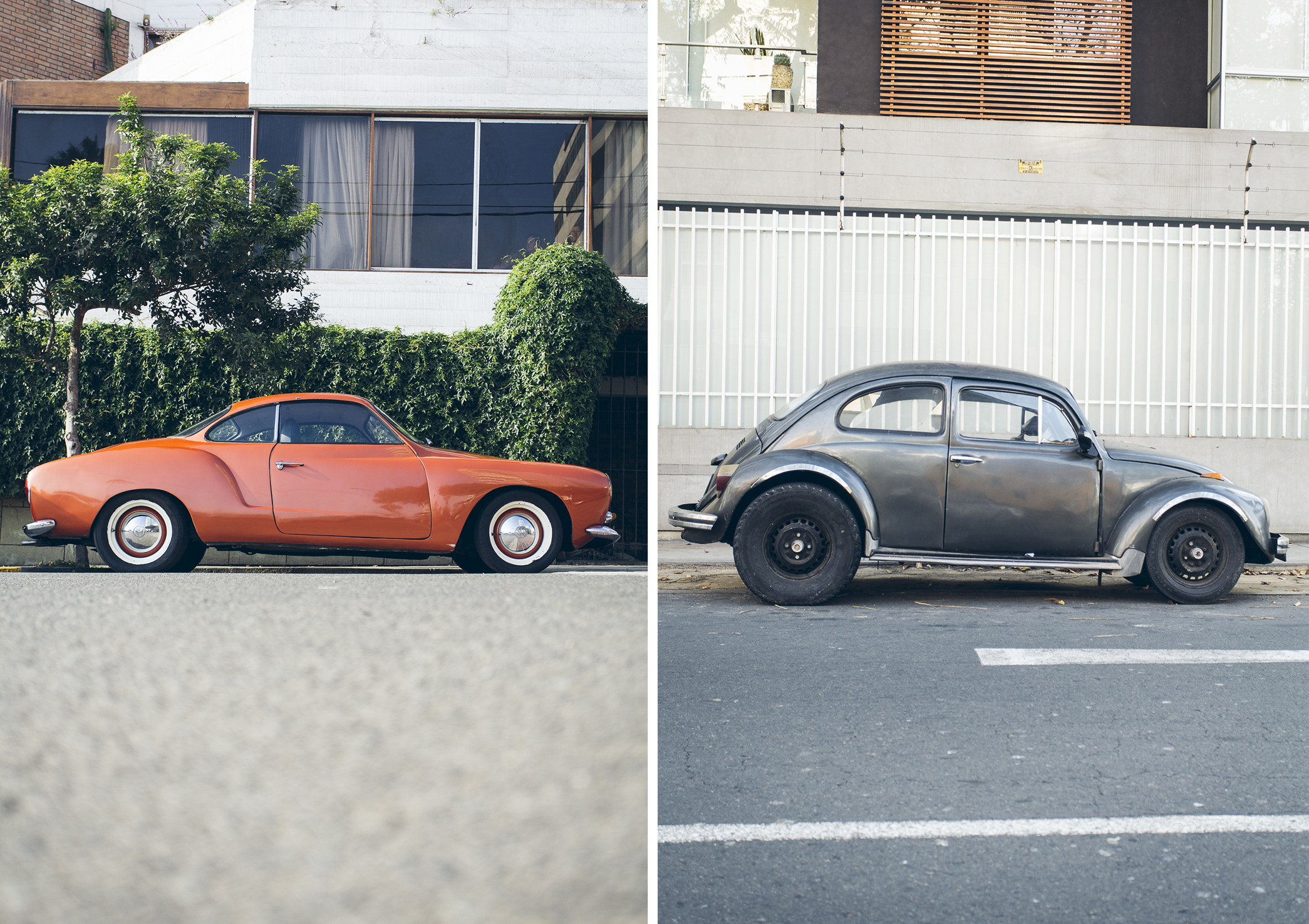 Our goals in Lima included fixing the exhaust on the truck (plus a tune-up, new tie-rod ends, idler arm, and pitman arm at Firewheels) and, of course, eating.  We left the truck off at the shop for a couple of days and pounded the pavement looking for delicious food. 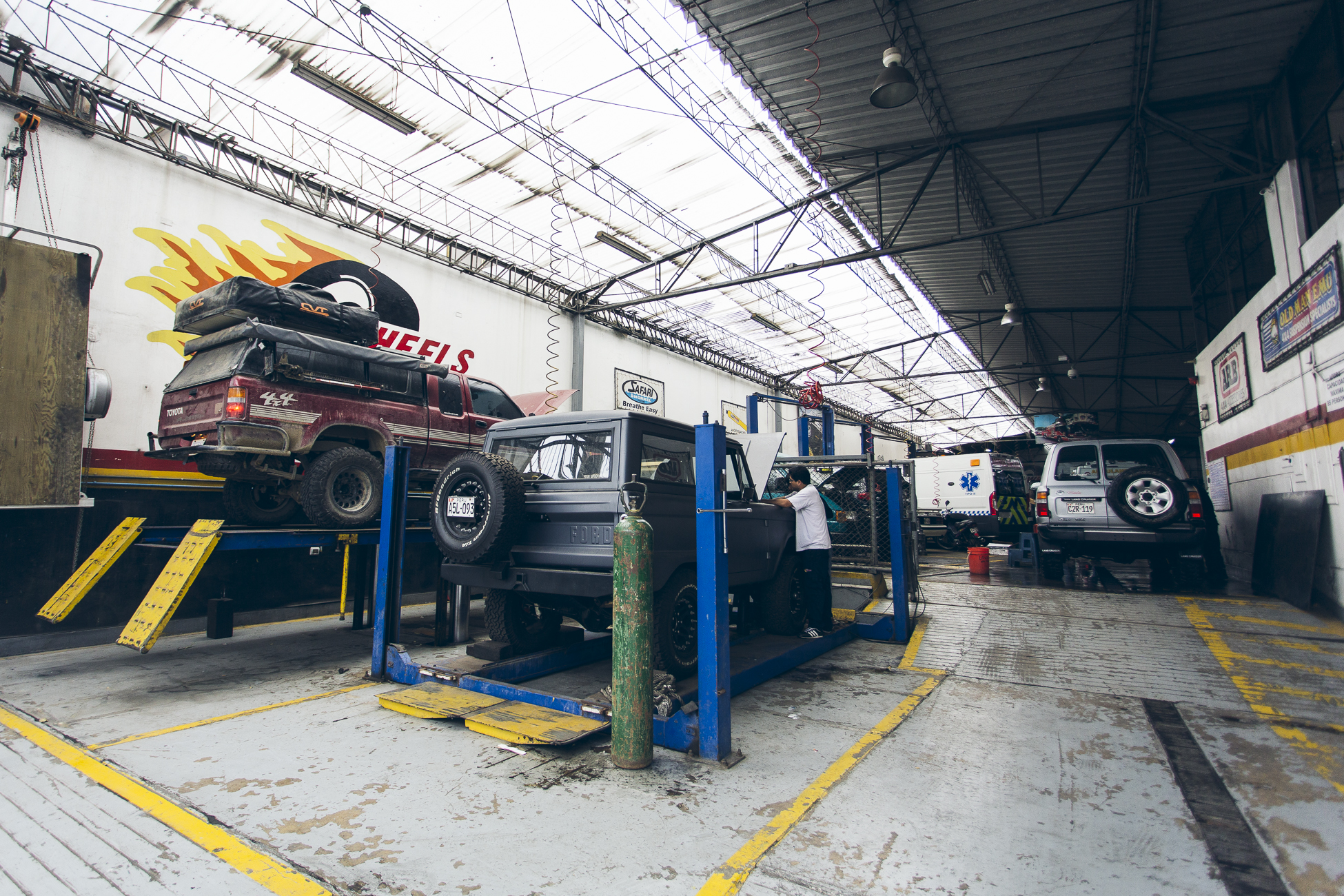 Lima is famous for its world-renound cuisine, both international and Peruvian. We used this Lima Restaurant Bible blog post to plan our outings for the upcoming few days. Ceviche, crusty bread, sandwiches, coffee, sushi, and Chinese food, here we come!

La Lucha Sangucheria was recommended to us by multiple sources, so we stopped by the cute deli-like take-out counter to pick our poison.  The staff spoke English, which was a bit shocking, but were exceptionally friendly and helpful.  We sat in seats atop the black and white checkered flooring and munched on our sandwiches while checking out the vintage photography lining the walls.  Yum.  Richard’s favourite was the El Preferido (shaved beef and fresh guacamole) and mine the Lechon de la Lena (can’t remember the ingredients but something about fire and pork).  The Chicharron is also one of the most popular, with roast pork, sliced sweet potato, onions, chill, lime and cilantro. 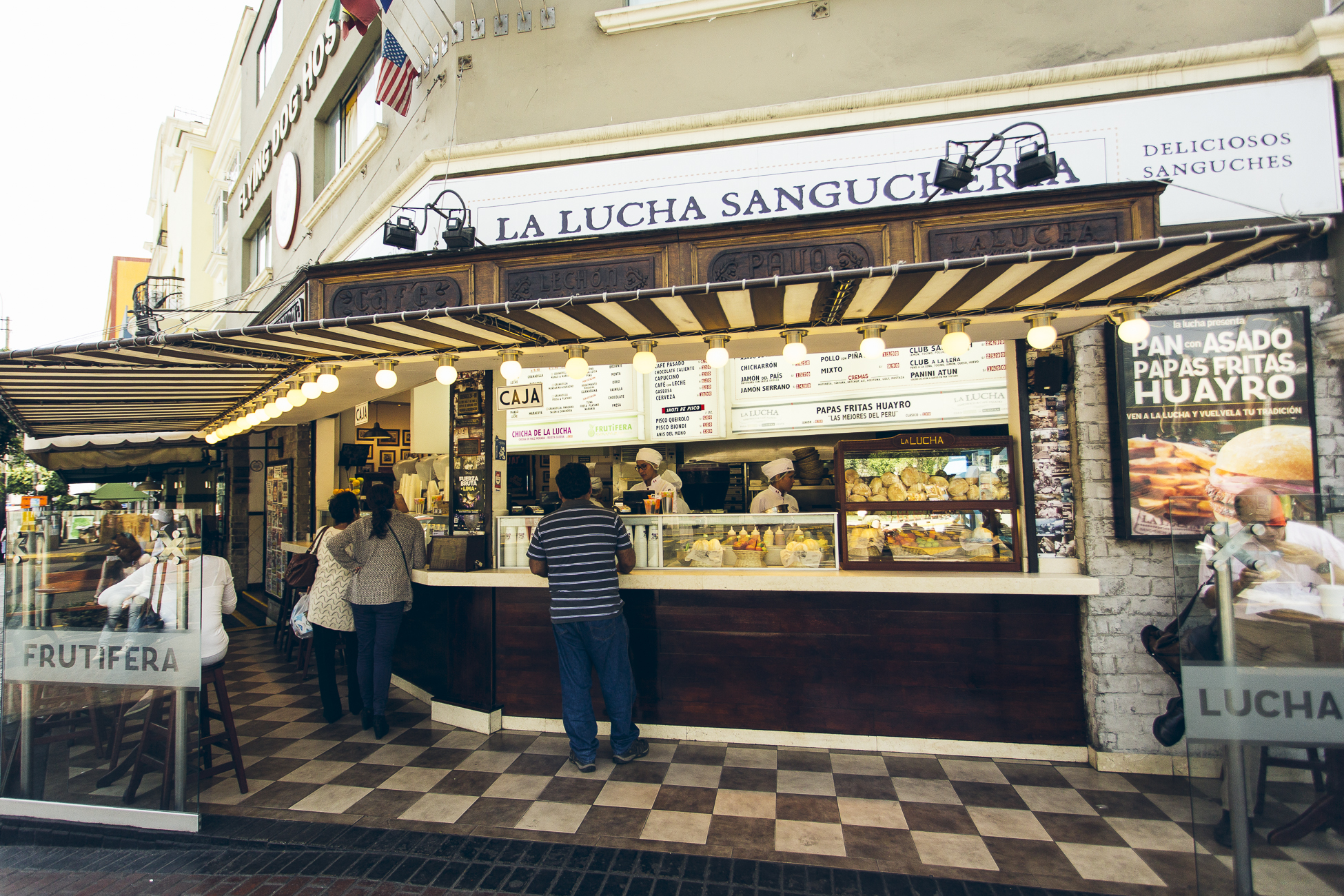 Across from La Lucha is Parque Kennedy, a main plaza filled with stray cats (and awesome vintage popcorn carts, in case anyone is wondering).  Unfortunately we didn’t capture any of the felines on film, but it was pretty entertaining to walk through the park and see people feeding them (bowls of cat food were tucked into the grass), chasing them, petting them, and playing with them.  There were literally hundreds of cats roaming the plaza.  And what a great place for them to be!  Tons of attention, food, and future mates.

Lima’s Mercado Central housed a ton of fruit and veggies, as well as a variety of food stalls for a quick bite of ceviche for lunch.  We grabbed an organic coffee on Farmer’s Market day from one of the tables set up under a tarp, which extended for a block protecting the various stalls from the sun. 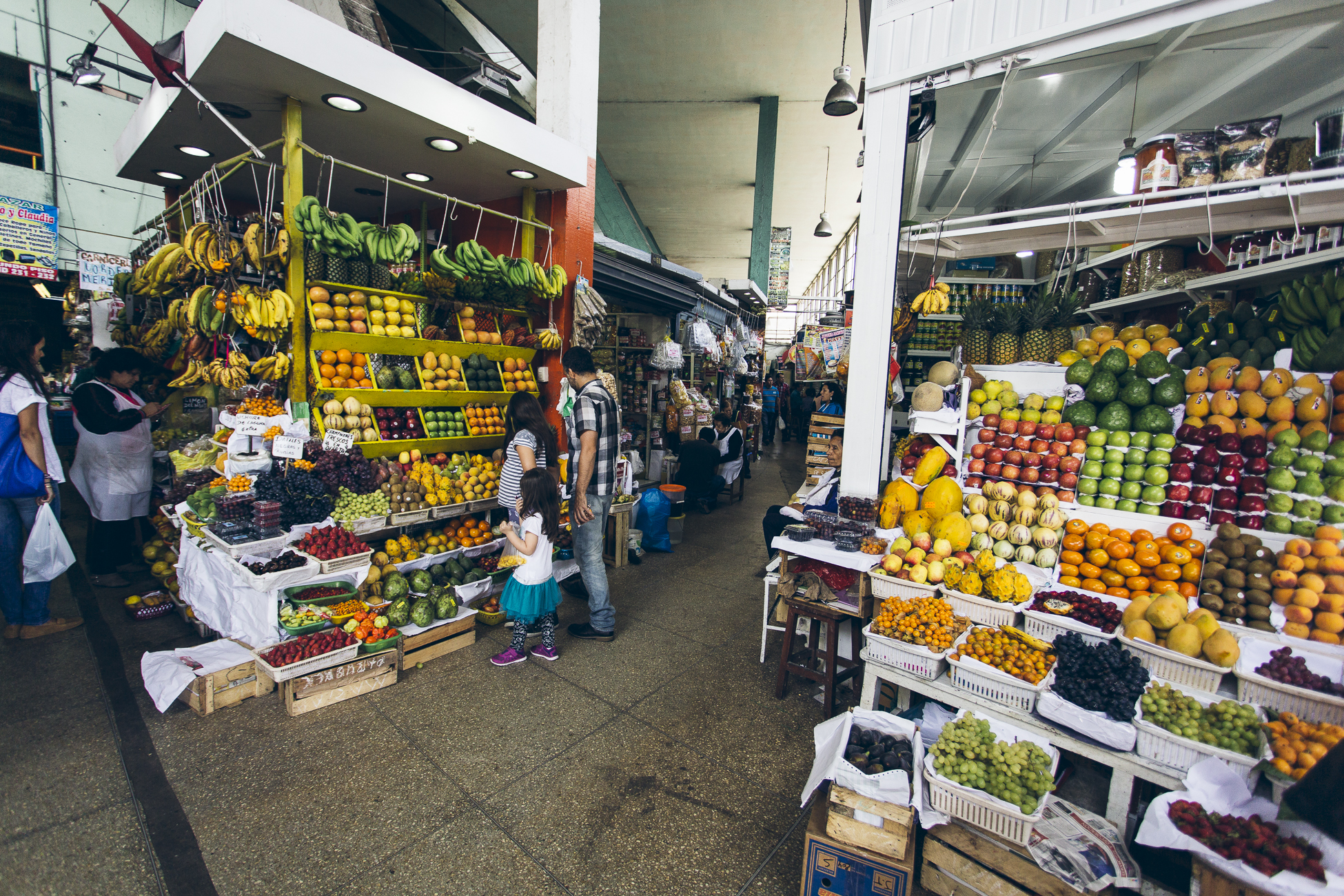 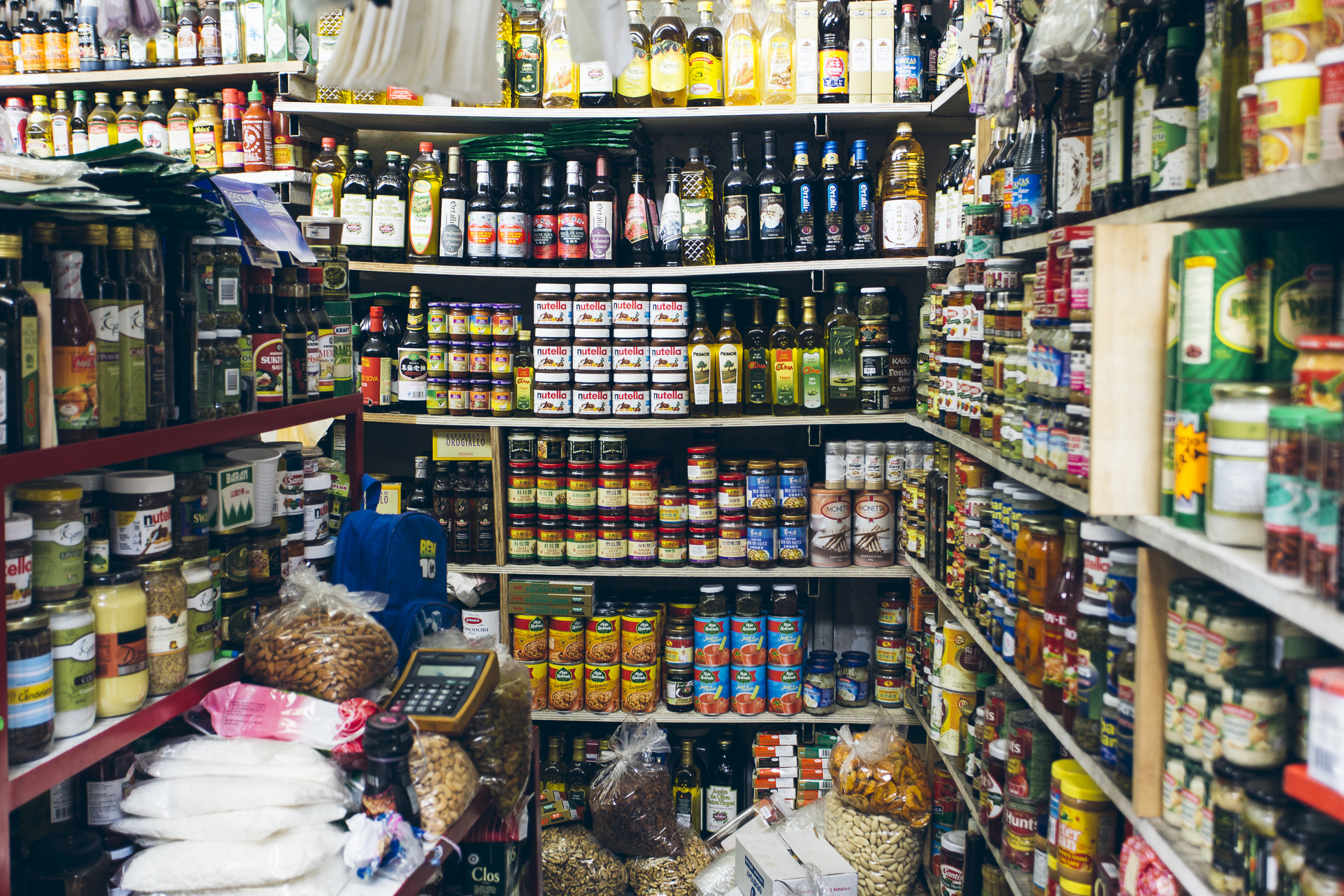 We happened upon this little place (name unknown) and saw a big line-up.  Okay, what are we having?  Turns out we were having lucuma cremoladas, which were the most popular with the locals (trust us, we asked them).  Cremoladas are made from fresh fruit pulp, water and sugar.  Lucuma is a local sub-tropical fruit, most commonly dried and ground into a powder.  Vegans and raw foodists actually use it frequently in recipes as it gives a caramel flavour.  Plus, it is a superfood!  It tasted icy but creamy and the lucuma flavour did remind us of caramel but slightly on the powdery side.  It was one of those things you aren’t sure you like until you are about halfway done, and then it is the best thing you have ever tasted.  We returned the next day for more.

La Picanteria was our splash-out meal.  You’re only in Lima once, so you may as well drop a couple of bucks on some good quality ceviche.  Finding the actual restaurant was an interesting experience.  Two closed antique turquoise doors hid all goings-on from pedestrians on the sidewalk.  We walked up hesitantly, unsure if we were in the right place, and a security guard opened the door for us to enter.  It was lunchtime and the place was booming!  We sat at the bar surrounded by suited office workers, cheery yellow walls, and brightly coloured paper banners lining the ceiling.  We enjoyed the ceviche – it was very fresh and had a nice spicy kick and citrus-y flavour.

Our favourite place to dine was El Pan de la Chola.  We sat at tiny wooden tables surrounded mostly by moms who brunch and girlfriends getting together for a beverage and treat.  Chewy rustic oven-baked bread with a crunchy crust topped with your choice of either butter and orange-y marmalade OR olive oil and baked avocado sprinkled with sea salt.  Dear LORD.  Our days of stale rock-hard crappy bread were (temporarily) over.  Pair that with a coffee and you’ve started your day off… well, perfectly.  If you’re into that sort of thing. 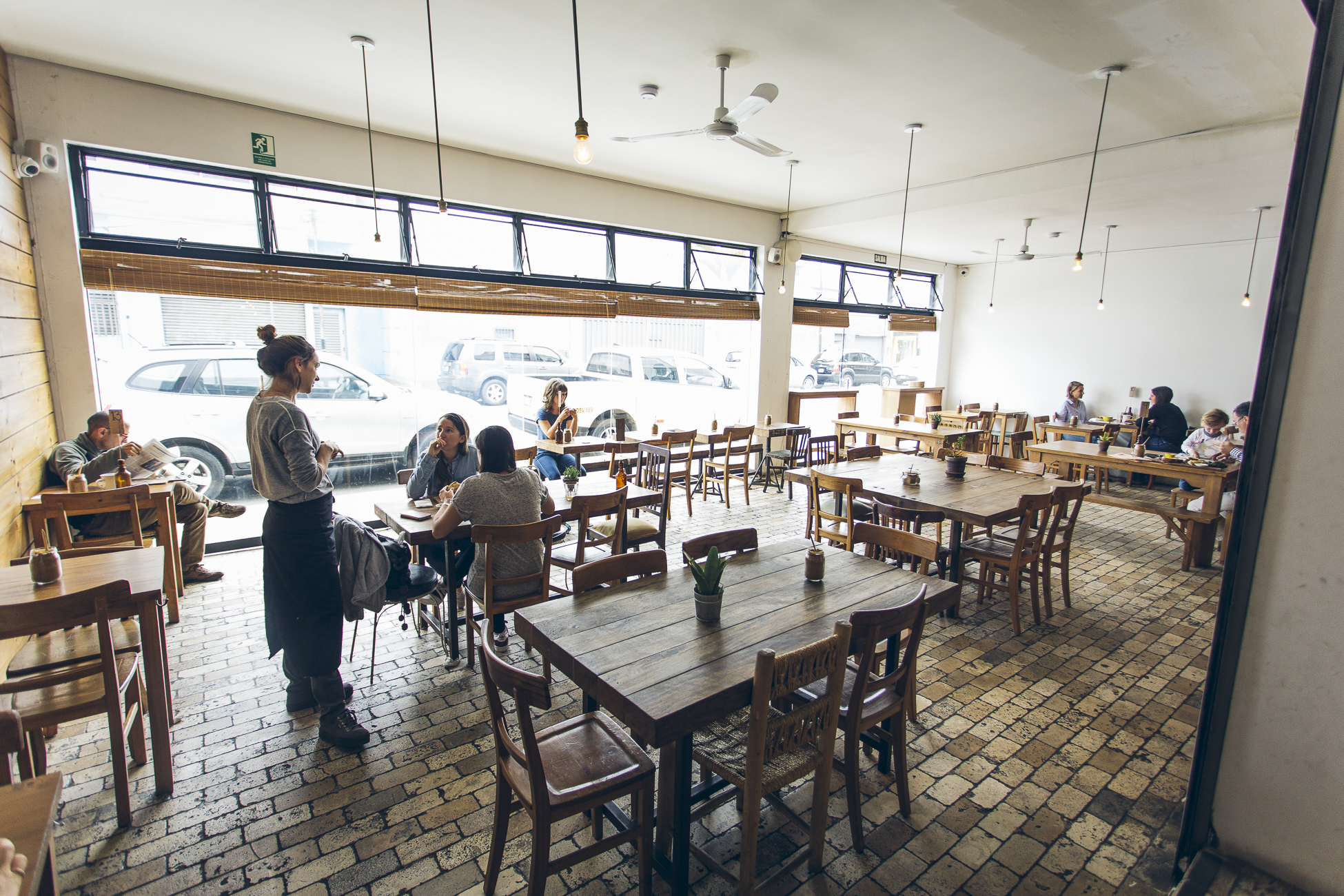 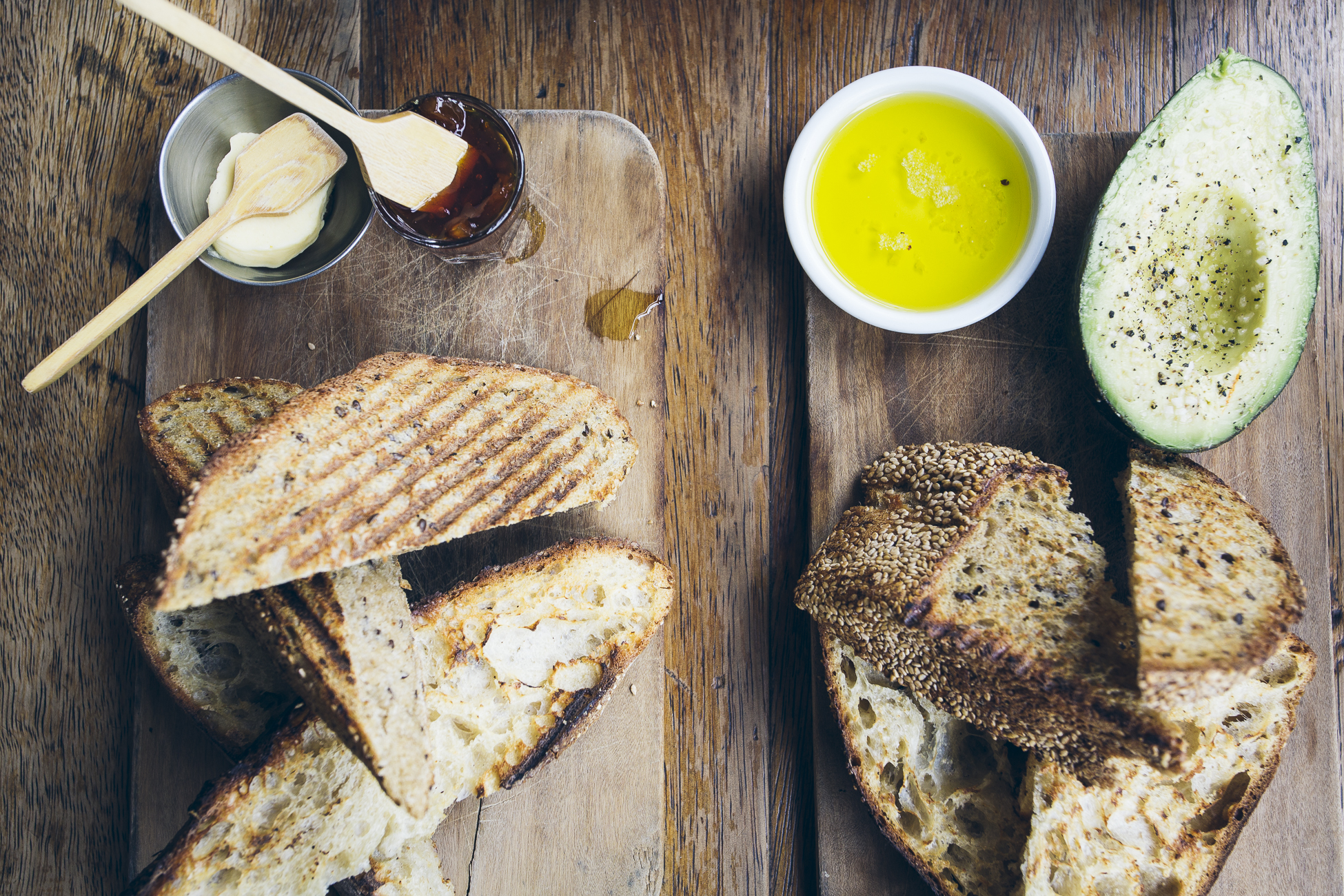 Speaking of coffee… Richard found a great little shop close to our digs called the Aromia Coffee Shop.  I don’t know if any of our readers have noticed, but Richard has a slight coffee addiction.  The fellows behind the counter knew his name by the time we left and waved to us even if we were just walking by their open door.  They had some pretty decent baked treats too.

Also on our must-do Lima food docket: SUSHI!  Our last sushi experience was in Colombia, and before that… well, Vancouver.  Luckily there was a sushi joint within a block or two of our hostel.  Ahh, the smell of sushi rice and nori seaweed brought us back to our love of cheap but great sushi back home.  This sushi ain’t cheap but it was pretty good!  The ceviche roll proved to be an interesting combo and we enjoyed its lime-y flavour combined with the rice and of course, wasabi and ginger. 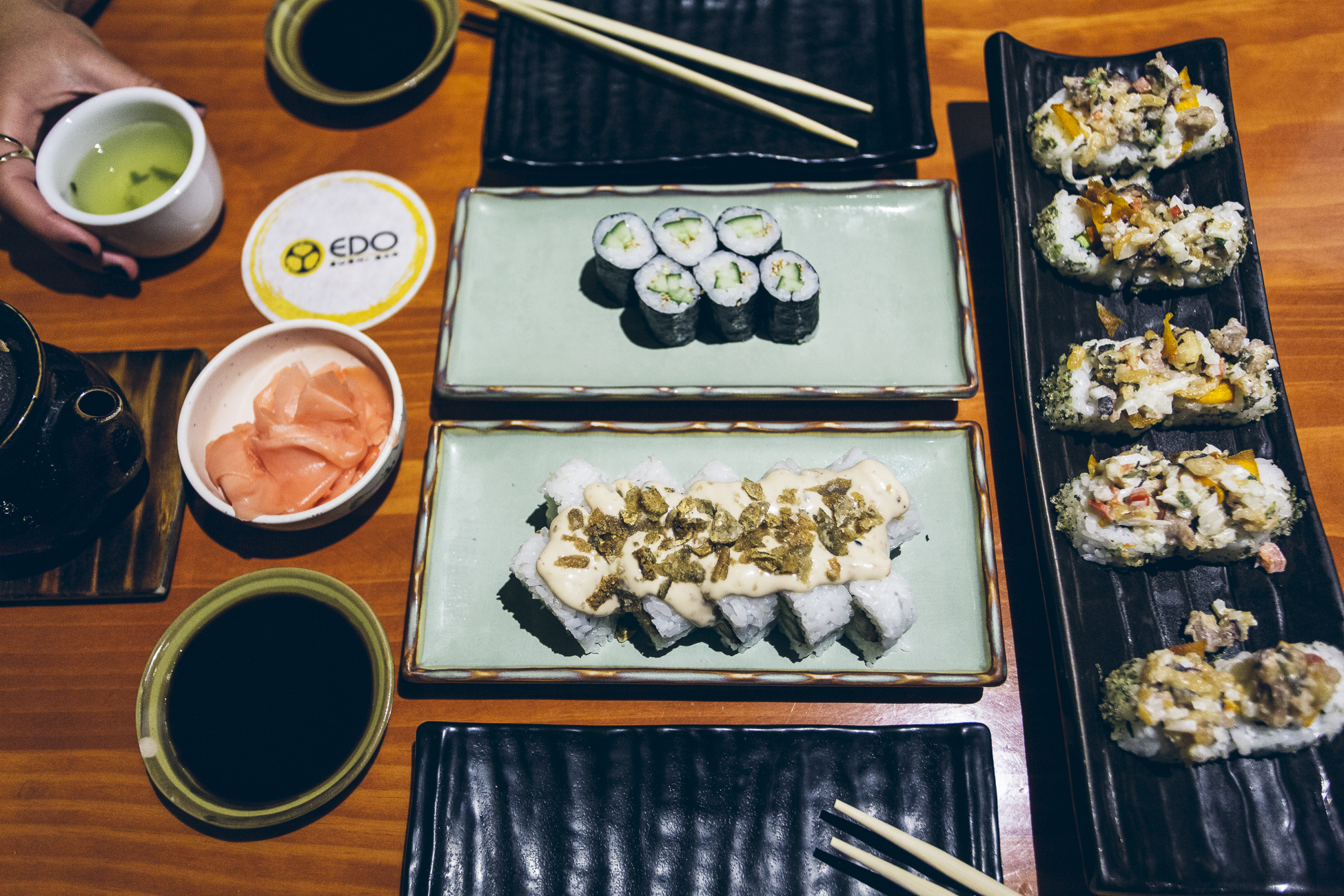 We made a quick lunch stop for Chinese food one day, which was tasty, but we felt negligent not visiting Lima’s Chinatown instead. 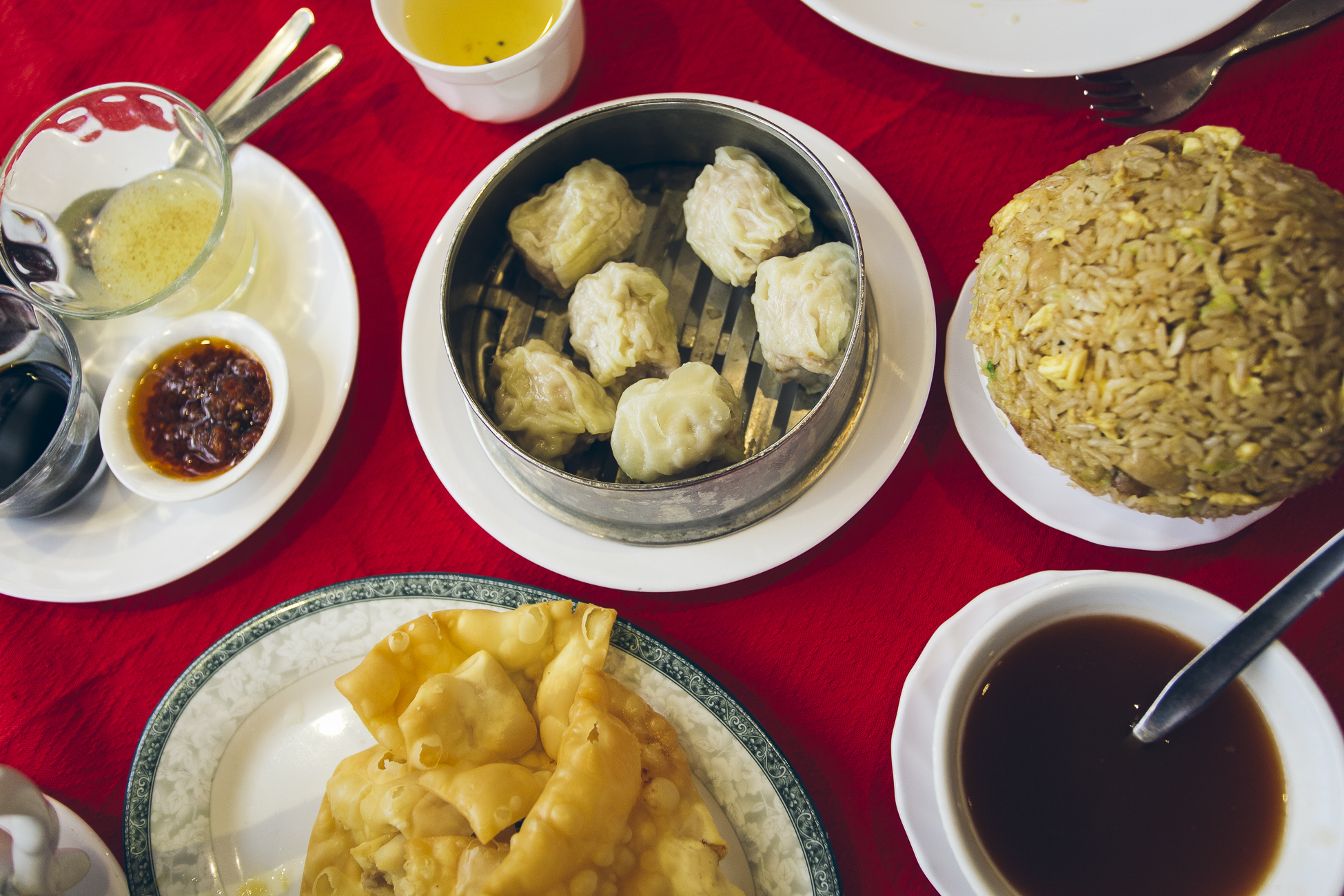 We thought it was pretty neat that a modern city like Lima would have a set of ruins in the middle of the Miraflores district.  Huaca Pucllana is a clay and adobe pyramid in which important administrative tasks took place between 200 and 700 AD.  We didn’t enter to get a closer look, but instead poked our noses through the surrounding fence and snapped some photos. 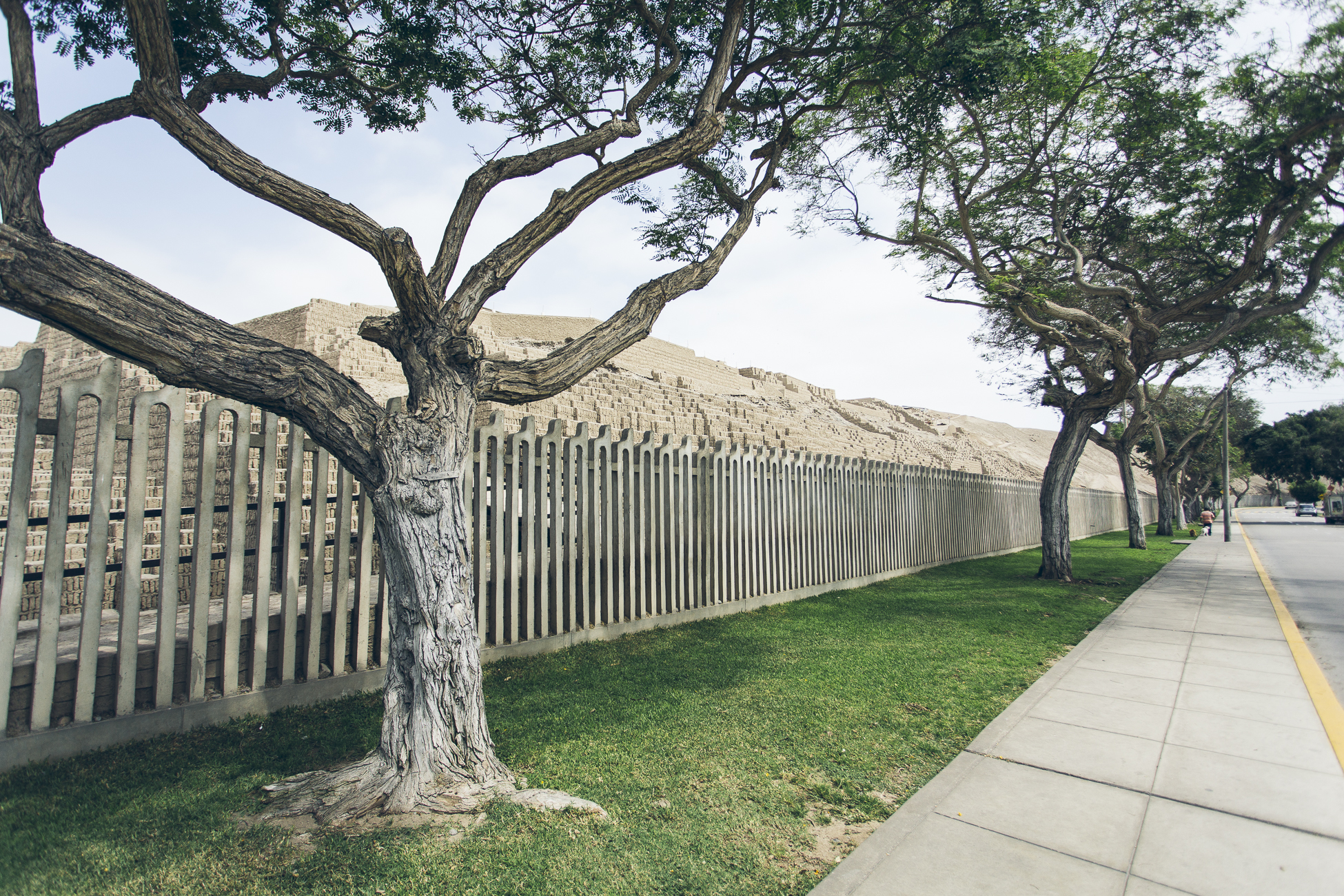 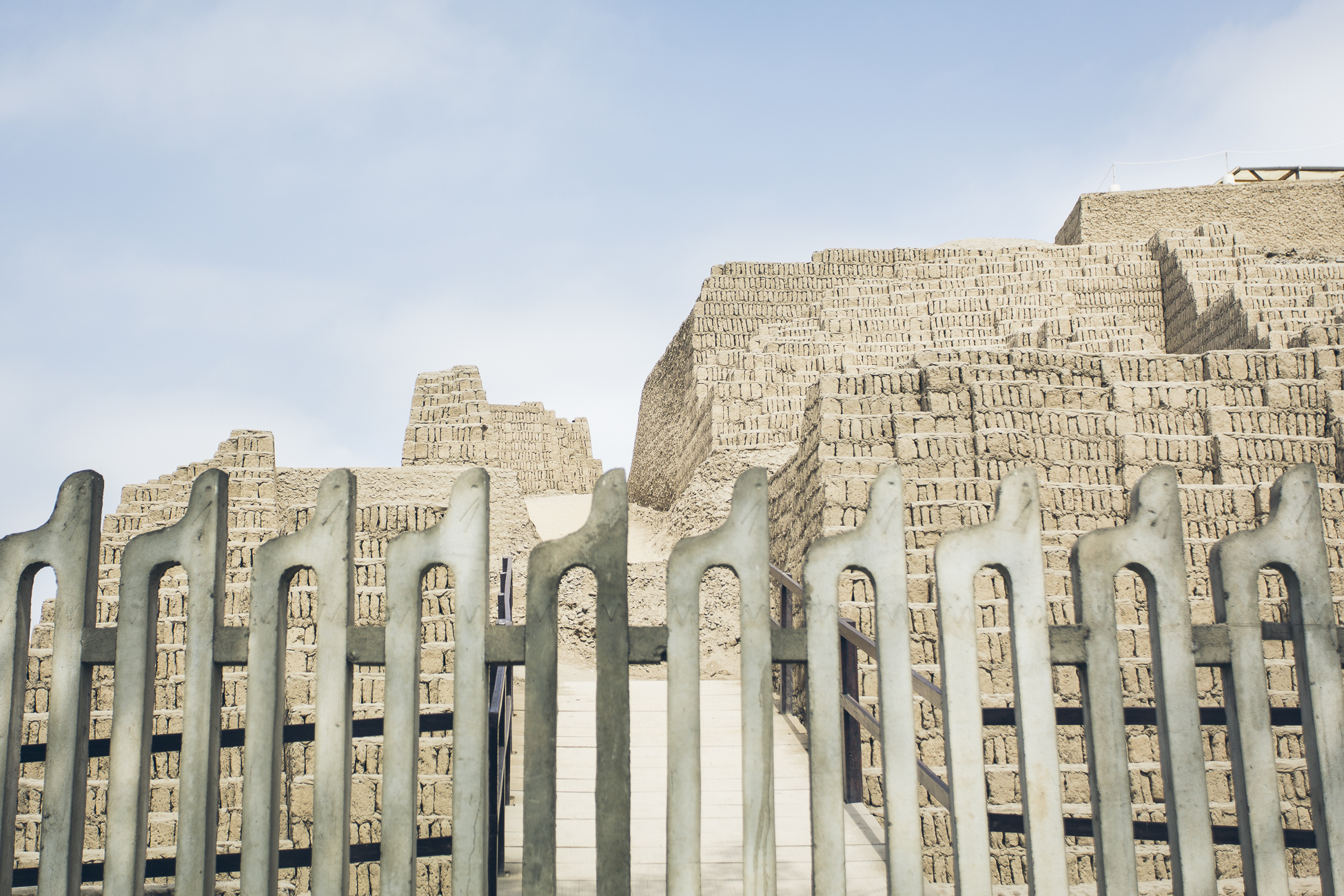 After all of that eating we needed some exercise.  Lucky for us there was a climbing gym only 10 minutes away from the hostel, so we roped in and tried climbing for the first time.  Fun!

After a very comfortable (a little too comfortable, in fact) week in the big city, it was time to hit the road and make our way towards Cusco and the Sacred Valley.