From the mountainous coffee region of La Tagua we headed north to the coastal town of Taganga.  The small tourist town lies in a beautiful bay full of fishing boats and people of all ages looking to take a dip in the cool waters to attempt to lower their body temperature due to the intense heat.

We spent an evening wandering the streets, swimming in the water, watching Copa America futbol at an outdoor restaurant, and sampling the street food offered along the causeway. Our favourite was the arepa con todo (arepa with everything). When it comes to food we like quality. But when you combine quality ingredients with… well, more quality ingredients we really can’t say no. The arepas had carrots, chicken, corn, cheese, and some random and delicious sauces of which we had plenty.

We watched the sunset from the beach, and Richard picked up some new sandals to replace his broken pair.  Life on the road can be hard on counterfeit Havianas sandals, but luckily there are many options to pick up another pair on the cheap. 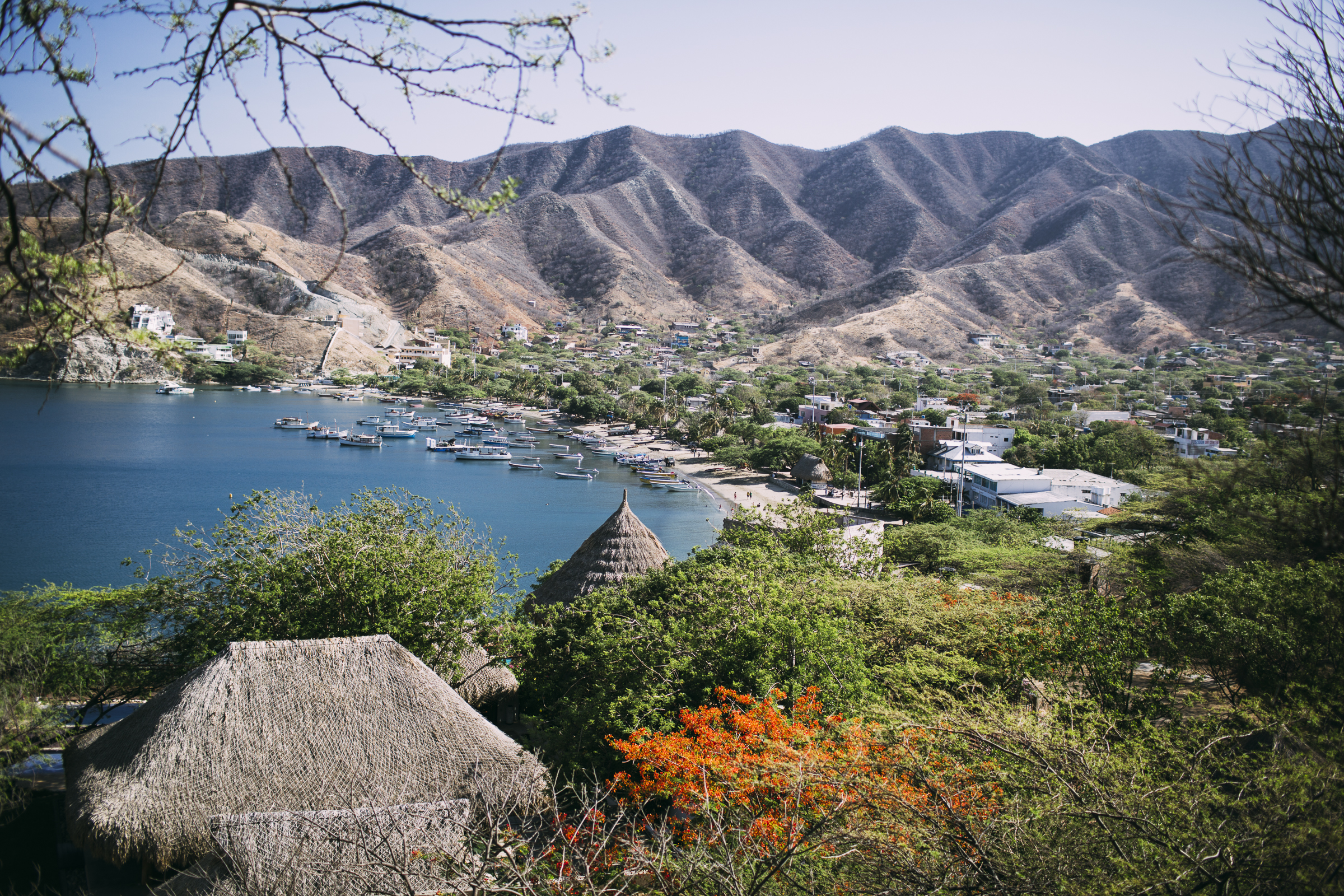 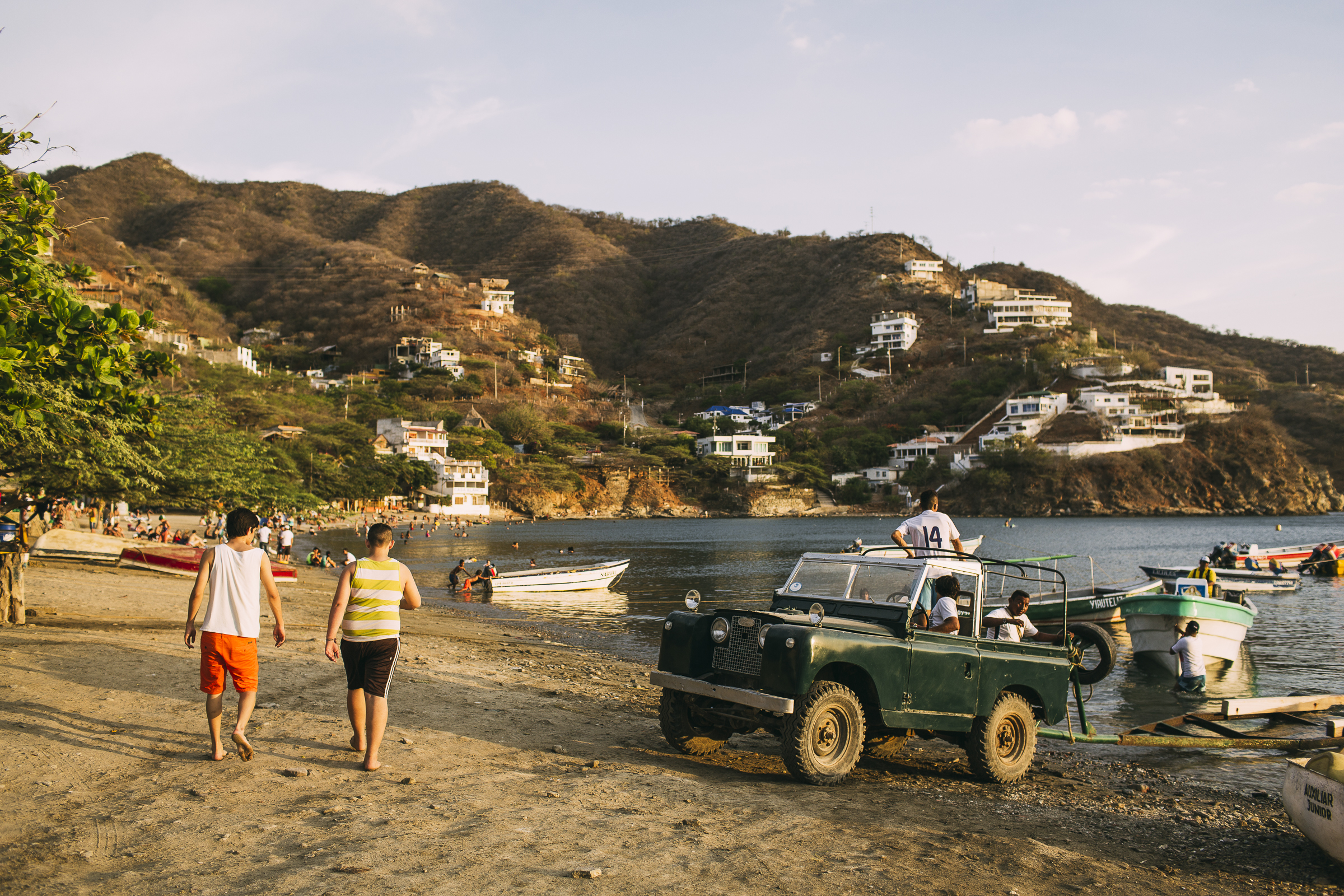 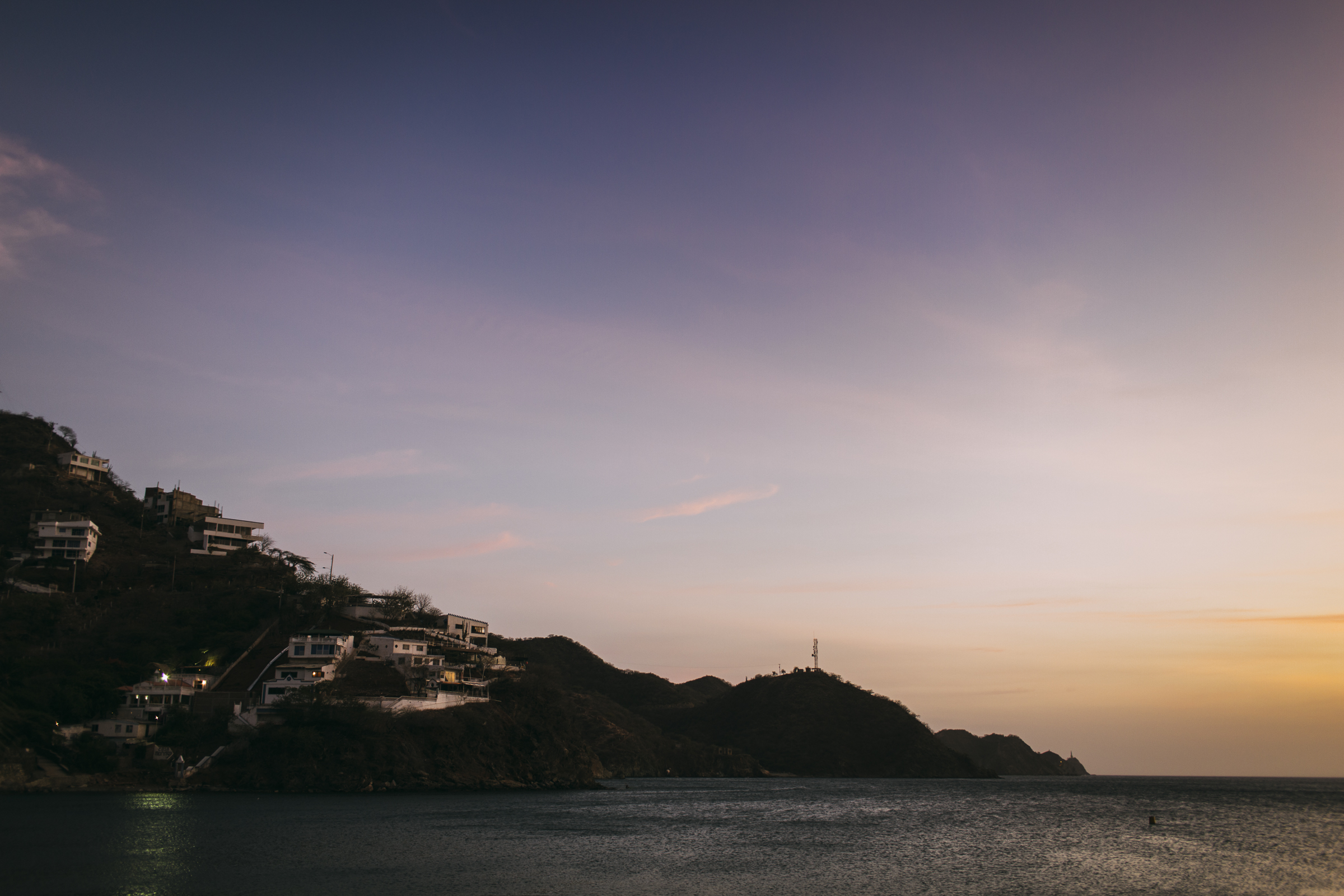 The next morning, after a restless night of dogs barking, a tin roof slamming every 20 minutes in the wind, and a group of travelers slack lining beside our tent at all hours of the night (damn hippies…), we headed to the Olympica Supermarket on the outskirts of Santa Marta before our planned drive north.  The heat does strange things to our Canadian-born and bred bodies. As we battled traffic to Santa Marta in our non-A/C equipped truck, our tiny breakfast combined with the heat finally put us over the edge.   We bickered and snarled at each other like street dogs fighting over last night’s arepa con todo as we attempted to pick up groceries for our trip to Cabo de la Vela.  Finally, we had to stop and make a trip to the cafeteria of the grocery store because we were so pissed off about nothing that we couldn’t even shop properly.  We sat down and seriously discussed abandoning our plan to continue north, as we thought the heat would be too intense and we would shrivel up into a pile of anger and dehydrated flesh.  We are not exactly beach people, although we do enjoy the sun and surf from time to time, and the hot weather was making us crazy.  We’re talking 34C degrees and 70% humidity making it feel like it was well over 40C without reprieve.  In the end we decided to compromise  and continue just a couple of hours north to Palomino.  We agreed that if it was a miserable affair we would head south to the mountains.

When we arrived in Palomino we were greeted by a fresh breeze, swaying palm trees, clean bathrooms, a lovely beach, and a grassy camp spot.  Just like that, life was good again. 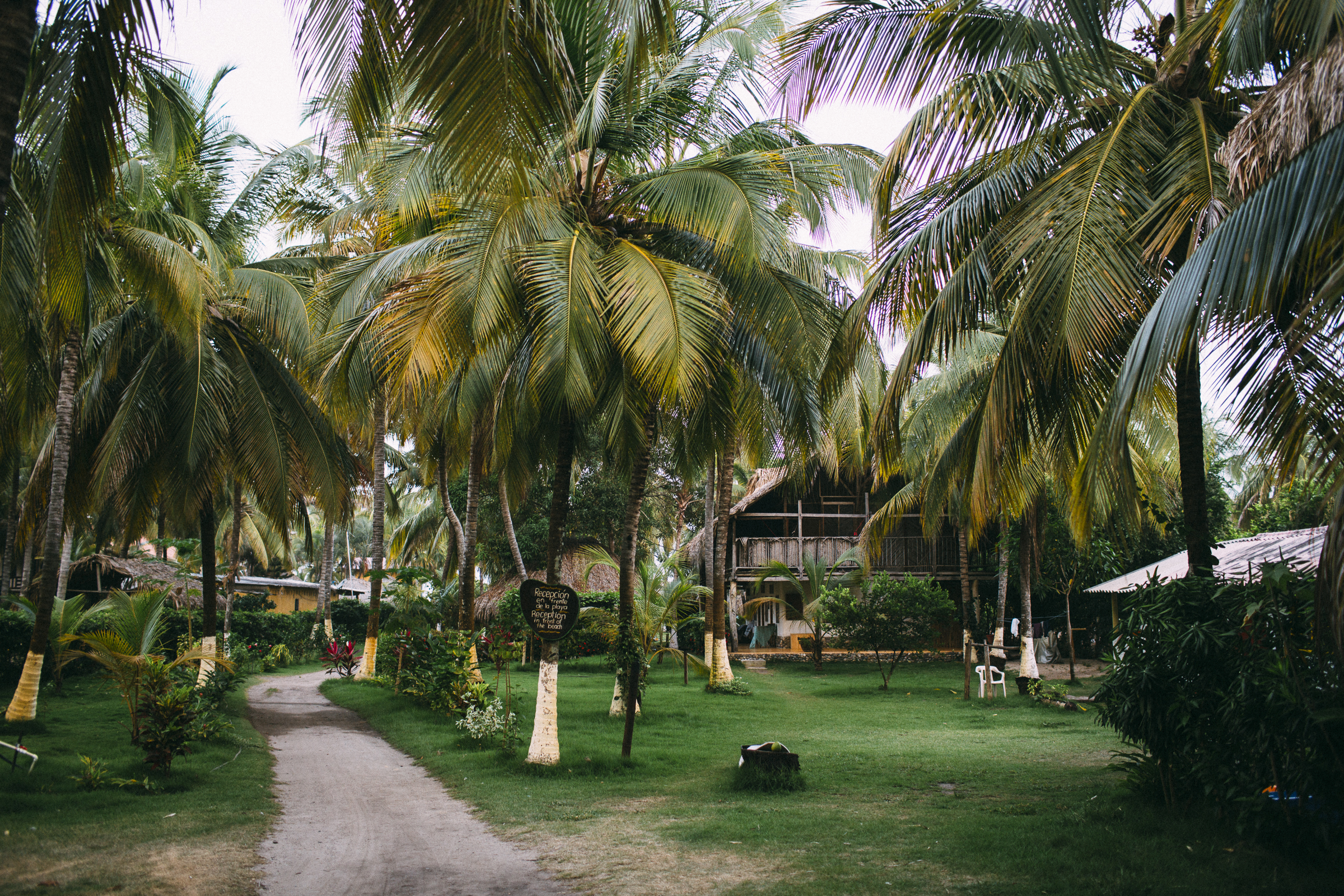 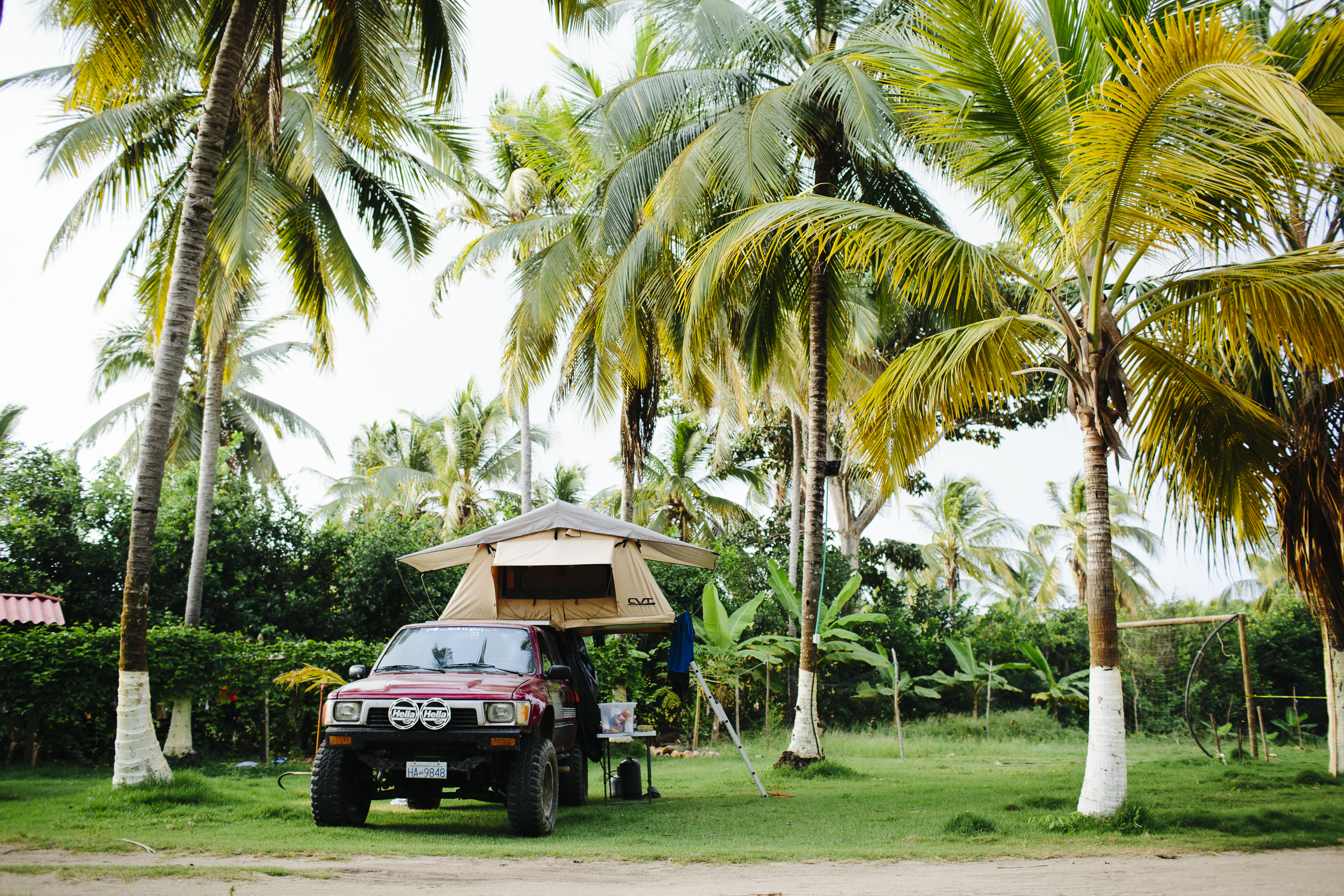 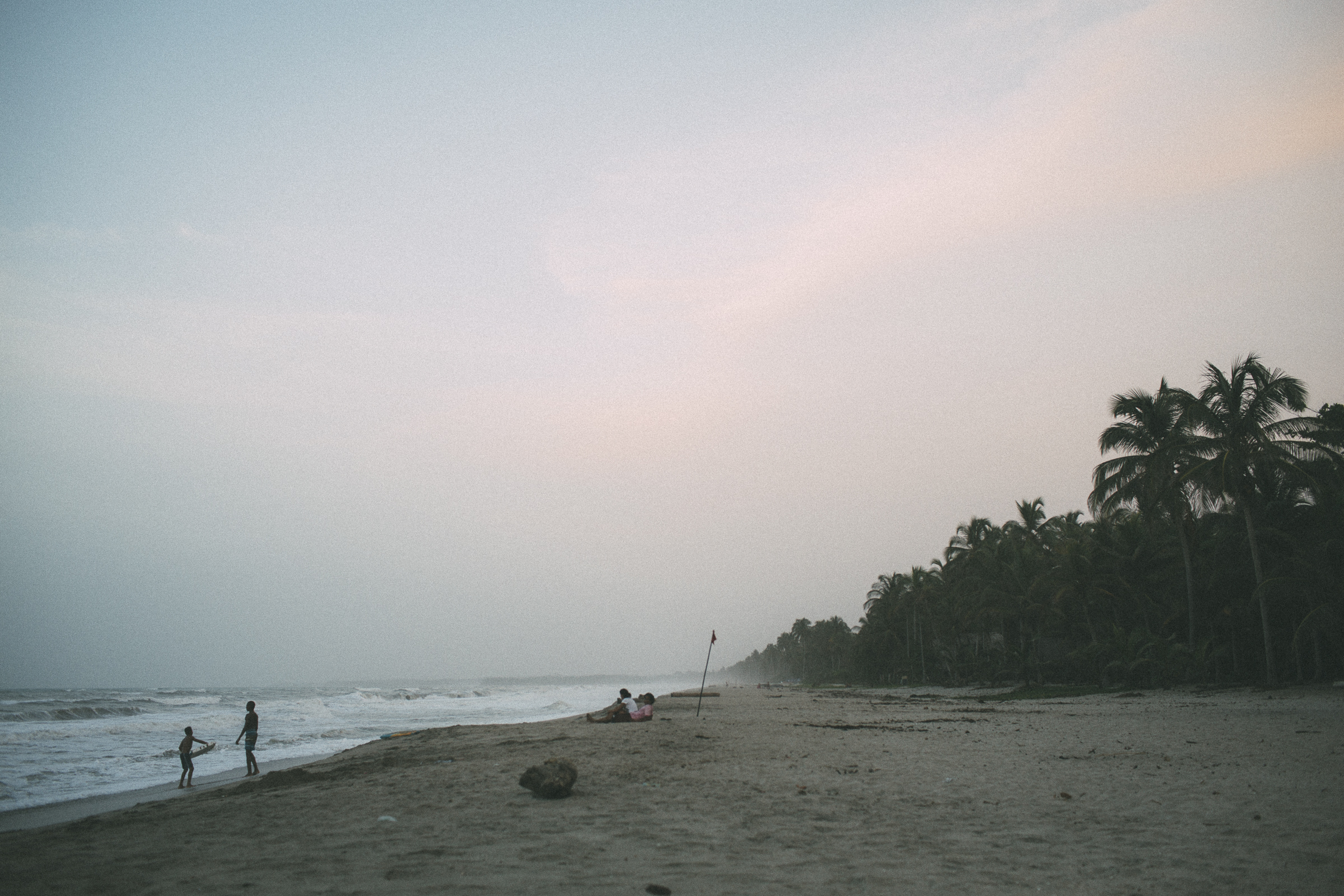 The La Guajira Penninsula is comprised of the most northern point of Colombia, and stretches to the northwestern section of Venezuela.  Our destination was Cabo de la Vela, a small town on the western Caribbean side of the peninsula.  We drove the sandy desert roads to Cabo de la Vela, where palapas lined the beach, gringos laid in hammocks at the windsurfing school, and a massive salty lake lightened the landscape to the east. We continued to Pan de Azucar, a tall mountain with spectacular views of the coast at the top. The scenery here was some of the most stunning we have seen to date.  From the top of Pan de Azucar we had 360 degree views of the ocean and the waves crashing on the orange and brown coastal land mass below. There was a peacefulness that we have only felt in Yosemite and Wadi Rum and Petra in Jordan. 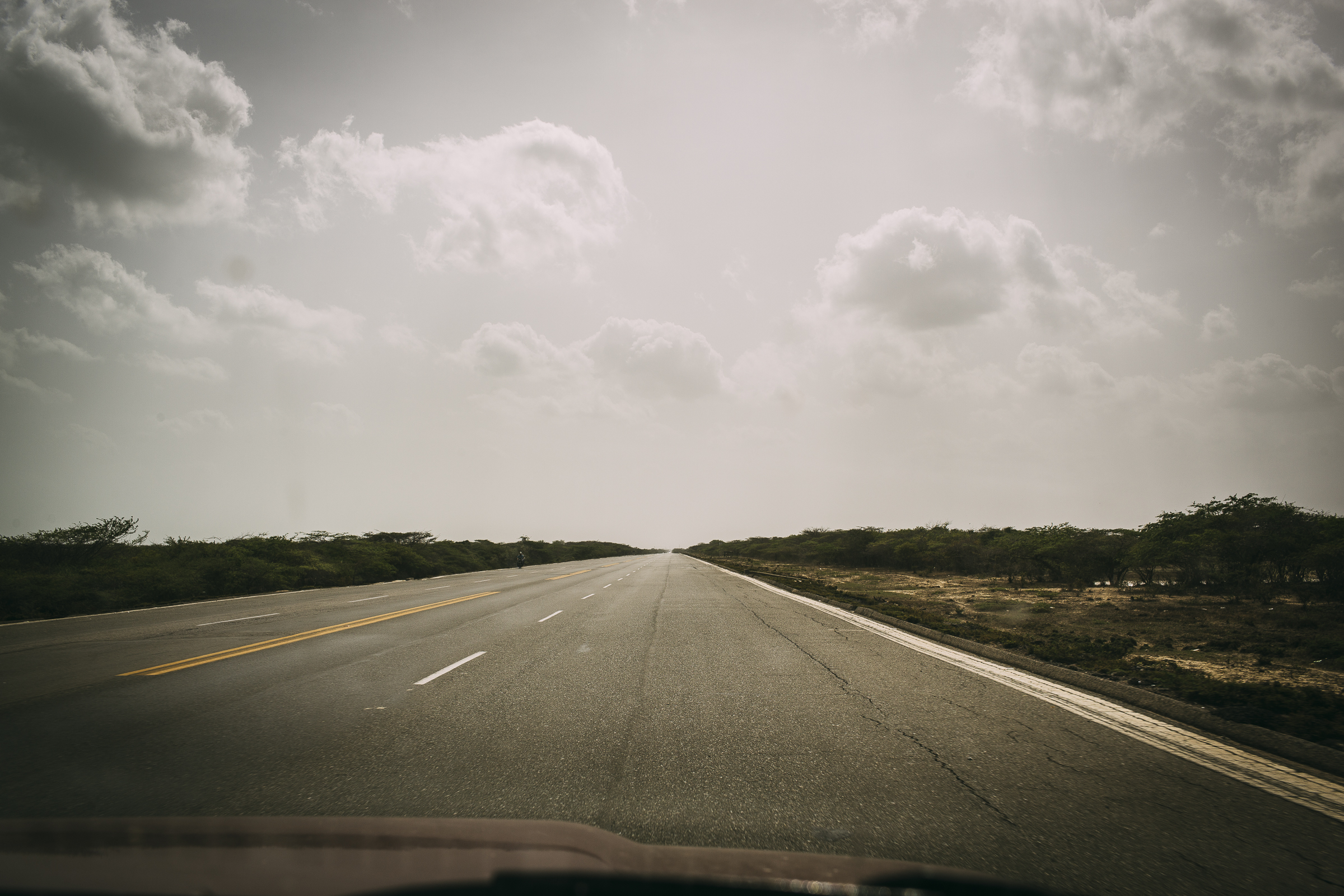 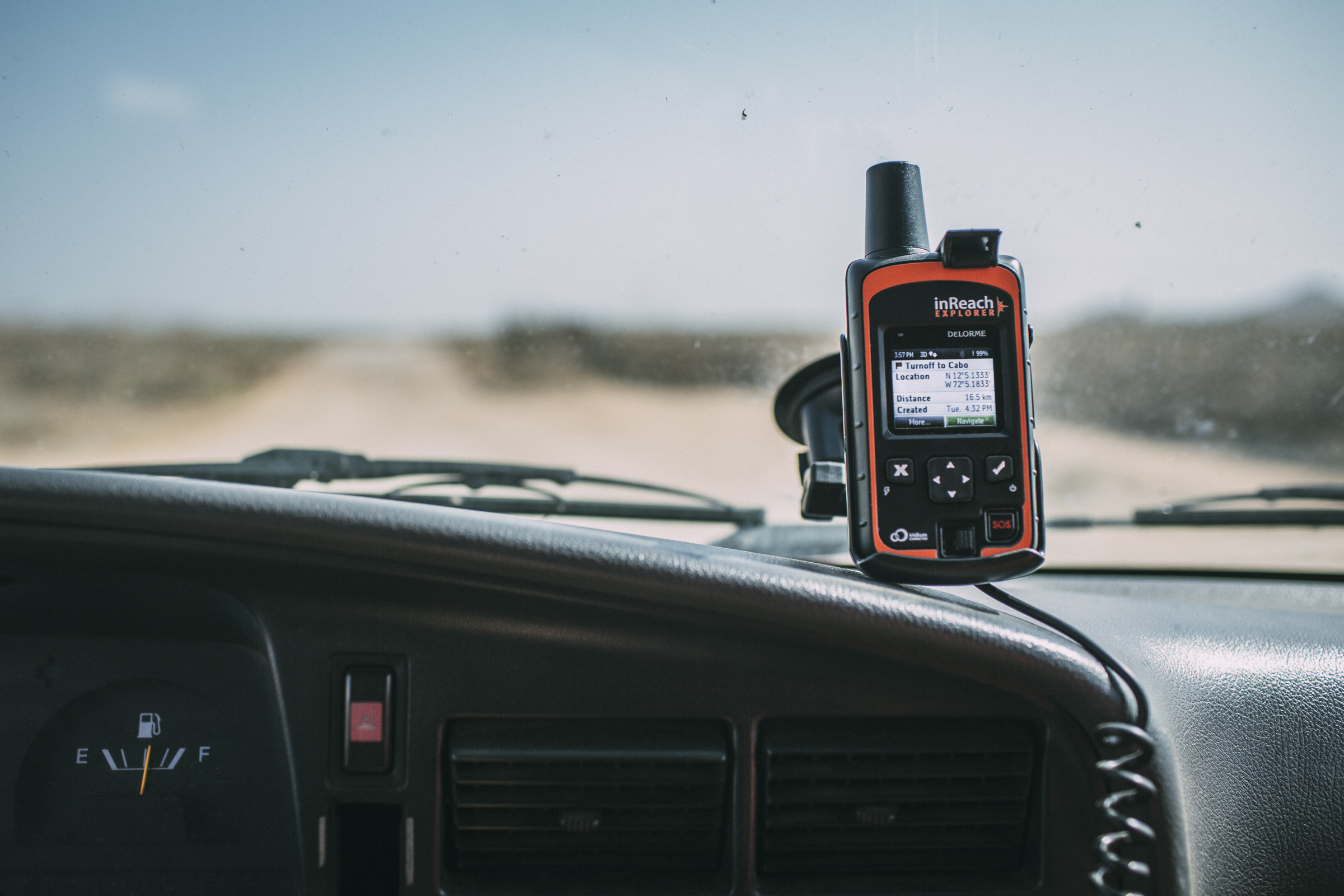 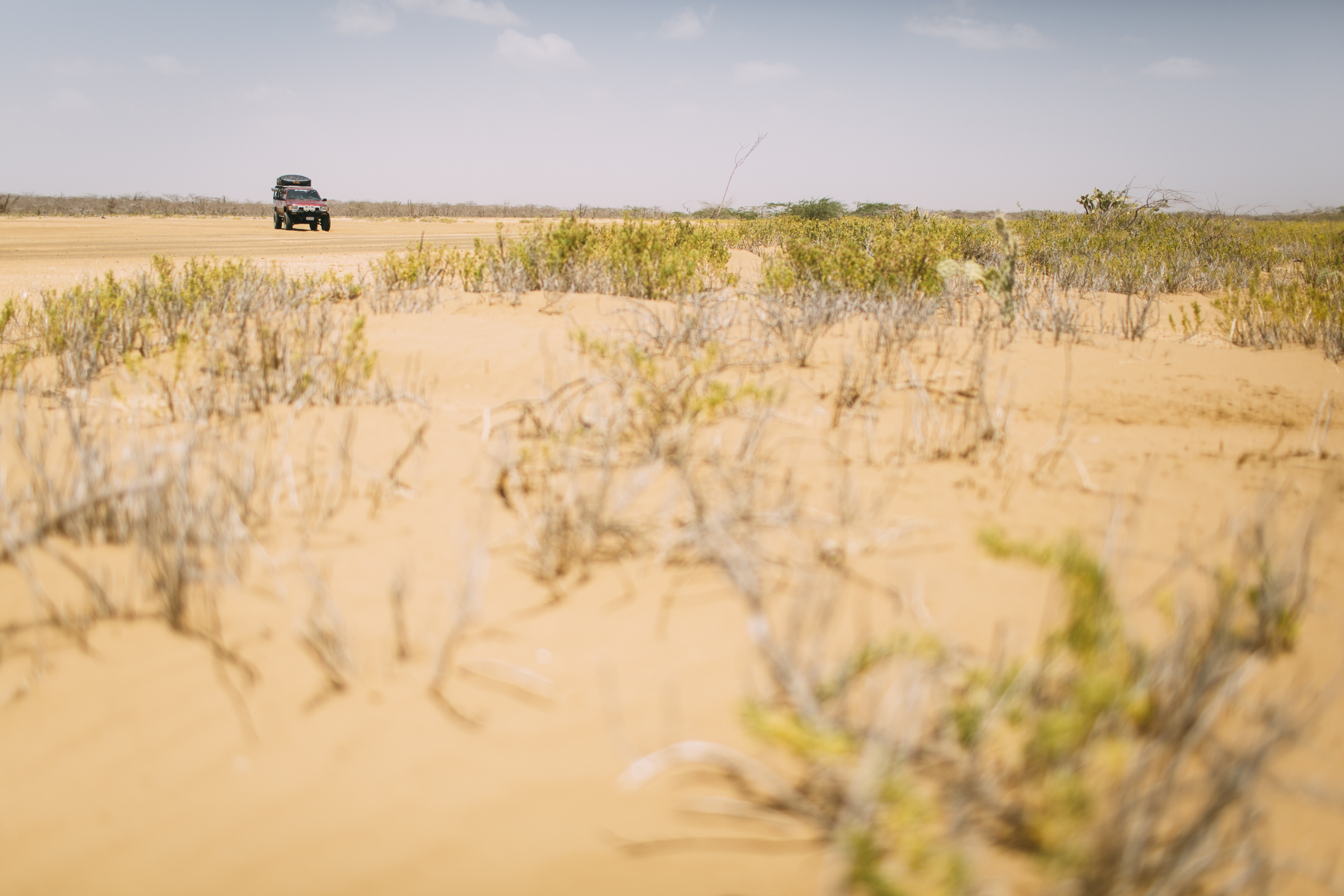 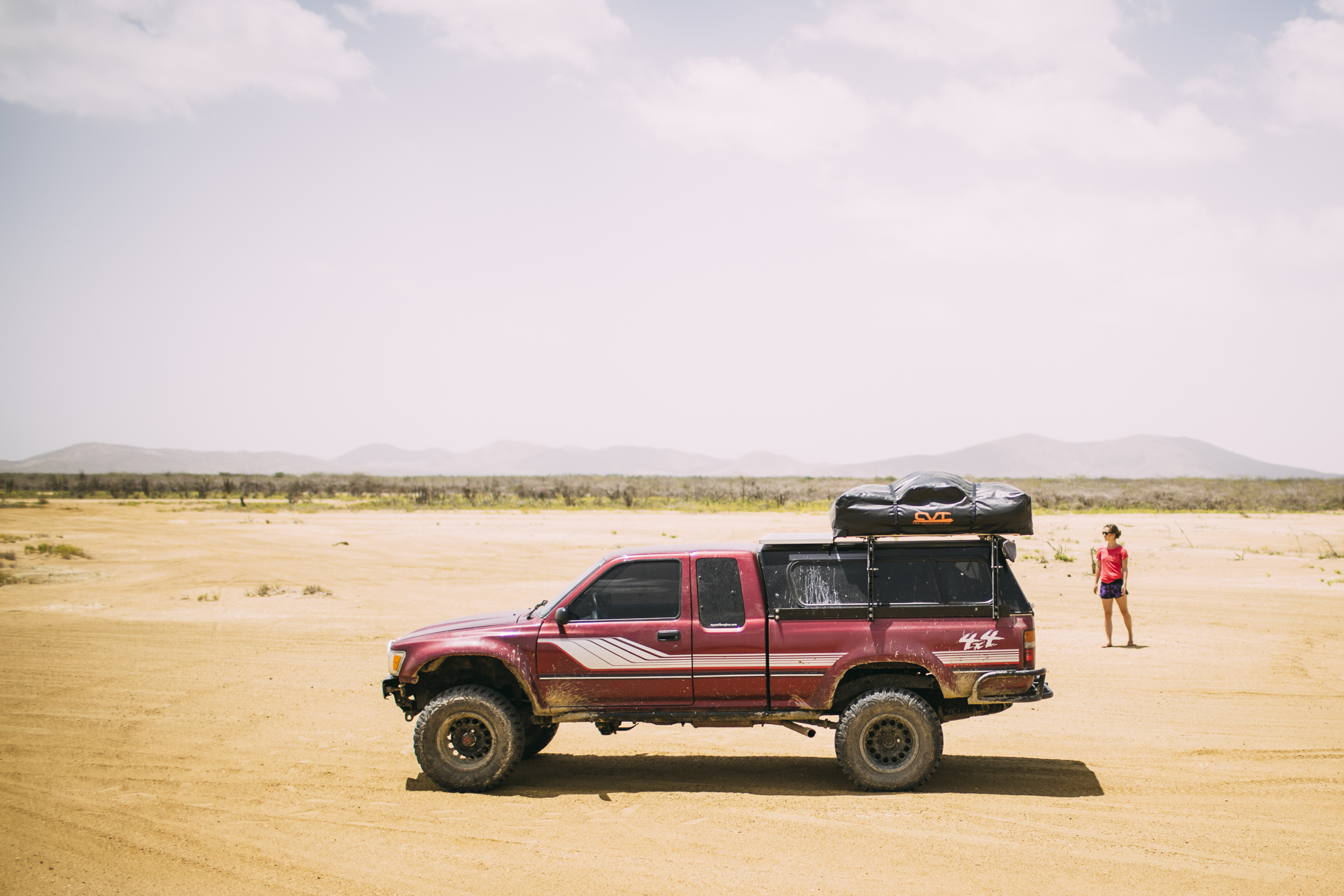 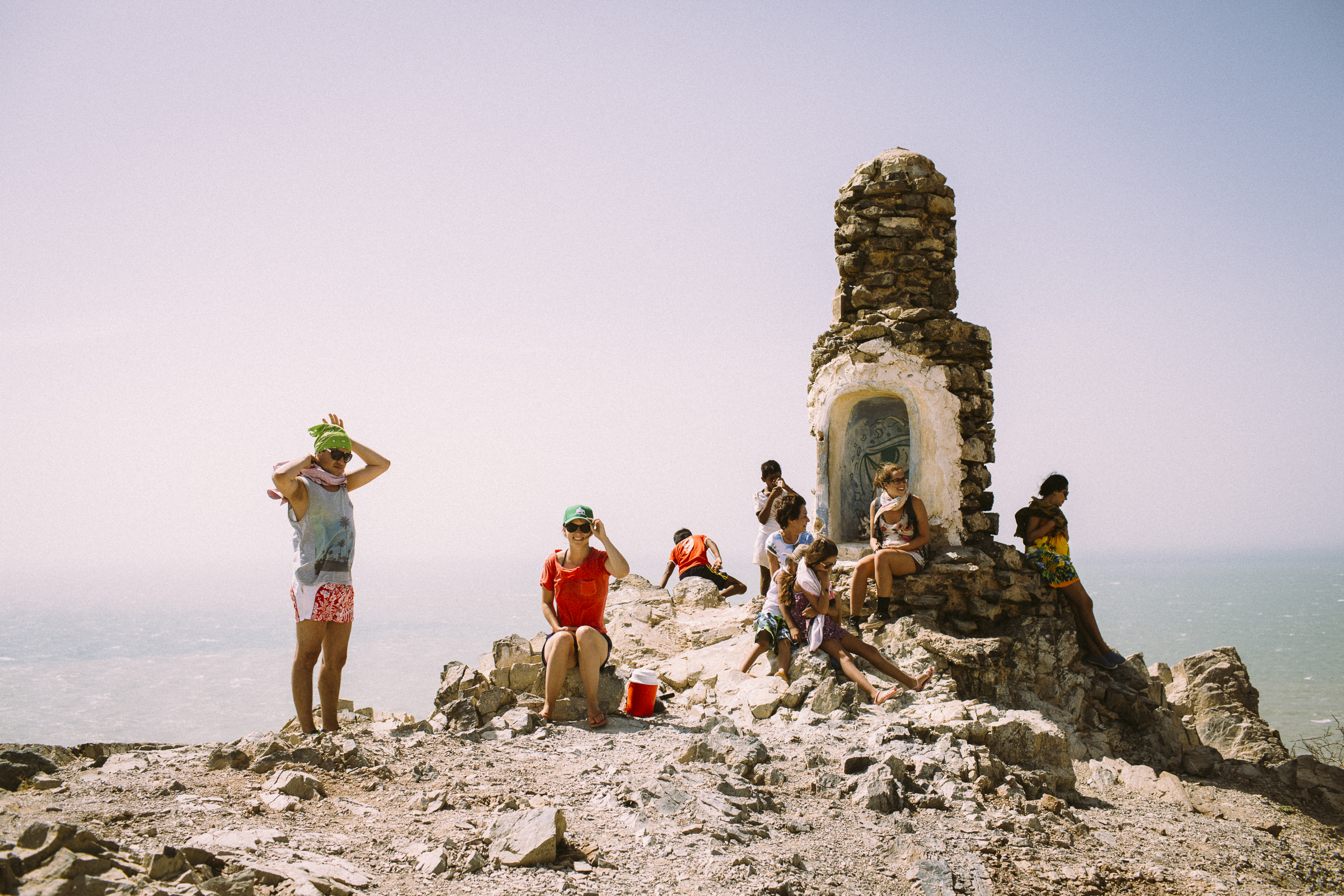 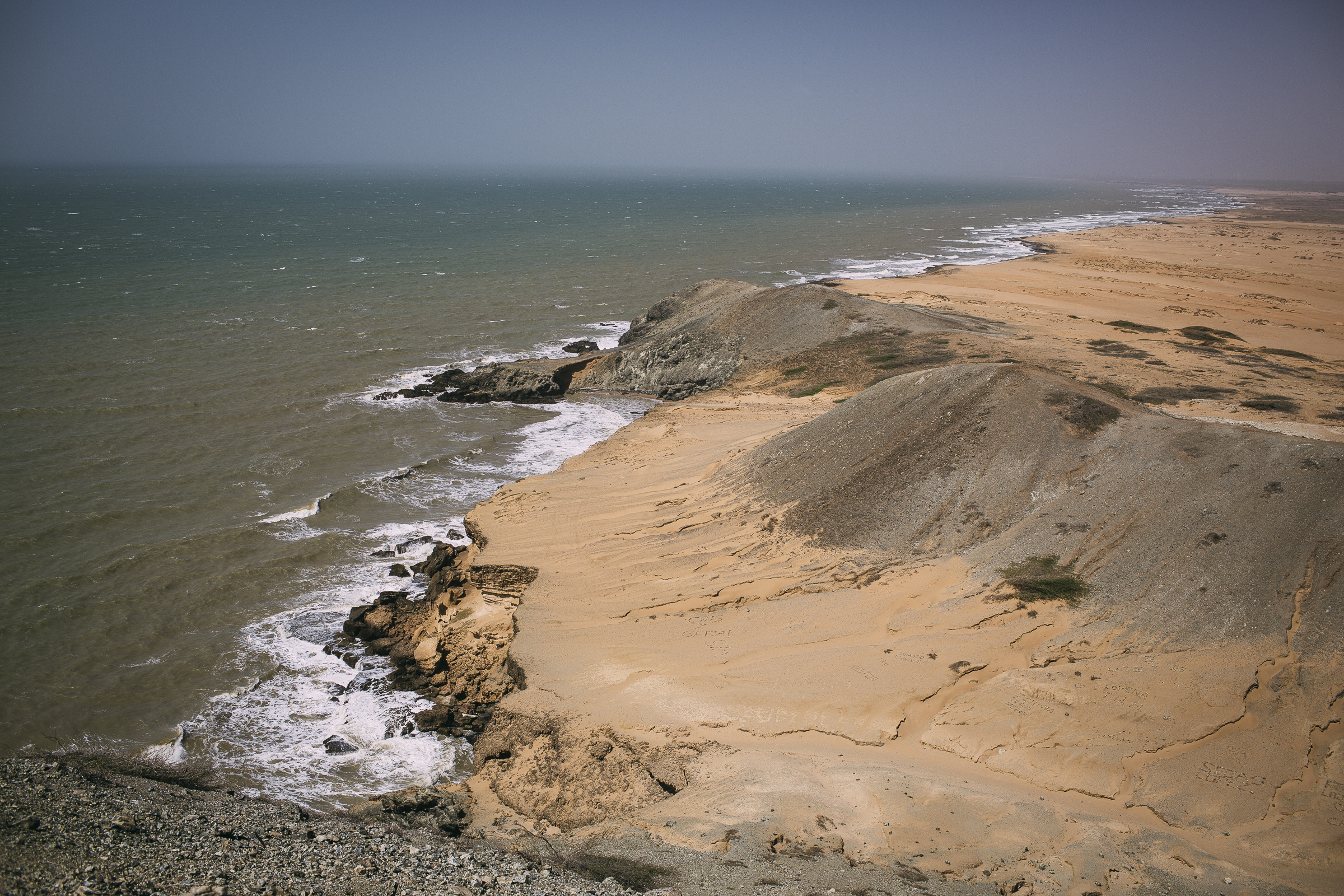 On our way out, we stopped by a wooden booth and picked up a hand-woven mochila (bag) made by the indigenous women of the local Wayuu community.  We saw many of the locals wearing mochilas of all types ranging from the brightly coloured and bold to a more understated light tan and black combination.  After a long and drawn out hemming and hawing, weighing the pros and the cons of the multicoloured, large/medium/small sized, and picking the perfect pattern, Ash had her very own mochila to store her goodies in.

After half a day in Cabo we decided to make our way back to Palomino.  This is a four hour drive and we were running out of daylight. We knew that if we continued on schedule, we would arrive back at our camp spot just in time to watch the sunset. As we rolled through the busy streets of Riohacha, we were pulled over by a group of policemen. It was a normal police checkpoint, but with six men instead of the usual two or three.  Since we were the only ones pulled over, all six decided to focus their attention on us.

It started with the normal questions.  Where are you from?  Where are you going?  Can we please see your documents?  And then they looked at Ashley’s passport. “Wow!! Is this you? Wow, so beautiful.”

Then the same guy looked at Richard and said, “Your wife is very beautiful!”

From the other side of the truck we hear, “Hey, give the passport over here, I want to see!”

At this point they all wanted to check out the passport.  They all thought that Ashley was 18 and couldn’t believe that she was actually 29.  This went on for a little while as the sun kept creeping lower and lower towards the horizon.  Okay guys, let’s get the show on the road we’re trying to make it back to the campsite before dark…

Ashley tried to get them to move on by asking, “Isn’t it dangerous to drive this road at night?”

“Dangerous?  No!  At night there is less traffic so it’s much safer.”  Says the policeman hanging off the passenger window.

At this point they decide to move the show along a little by getting Richard to show them the contents in the back of the truck. That went quickly since we have so much junk  they didn’t want to deal with it. Once the truck was locked up, but while Richard was still out of the truck, two cops approached Richard and asked, “We want you to show us your money.”

“We want to see your money.”

A bribe?  They already handed back our documents, so they don’t have any collateral.  Although, there were are six of them keeping us there…

“We want you to show us your money.  We want to know what it looks like.”

What the hell does that mean?

“We want to know what Canadian money looks like.”

Ohhhh, apparently they’re not asking for a bribe.  At this point one of them pulls out their smartphone and starts Googling images of Canadian currency.  First they look at the coins, then the cash… all the while showing each of the other guys what it looks like.

That’s cool, no bribe request to fight off, but the sun sure was going down quickly at this point.  Eventually, once the international economics and currency lesson was over, we were allowed to continue on our journey.  We continued driving for 30 minutes before we were stopped in the middle of the highway due to a protest roadblock, during which we sadly watched the sun go down from the side of the road.  We were the second vehicle in the line-up, so at this point it is painfully obvious that if we weren’t playing international relations with the cops we would already be setting up camp at the beach.

At first we were freaked out by two Klu-Klux Clan clad gentlemen who apparently donned their robes for the event.  That is, until they started giving out big hugs to the locals.  How menacing.

After an hour-long wait in the dark waiting for… well… we don’t know what we were waiting for, we were allowed to pass.  Apparently the protest was in regards to their poor electrical service.  Ironically the headlights on the truck haven’t been working since shipping to Colombia.  Luckily we were able to fire up our Hellas and drive the last 20 kilometres back to the campsite without issue.