The original suspension in this truck was clapped out.  The rear springs sagged with the lightest load in the bed and the shocks could barely dampen the ride with the original tires.  Now that we’re going to be running larger tires and hauling lots of gear on roads, trails, and beaches through Central America it was time for an upgrade.  Our trip to ARB netted us a sweet new pile of suspension gear for our pickup.

This is what we picked up:

1″ 4Crawler bodylift and 265/75R16 tires.  Otherwise everything is stock.  Looks good, rides like a truck with a bajillion kilometers.

These parts have been marinating in our condo awaiting installation for the last 4+ weeks and I finally had a chance to install them.  Ashley is super excited that she no longer has to kick them out of the way when trying to make her way into the kitchen.   I am happy that at least the ARB fridge is still there so I can check it out every morning and dream of the future road trip. 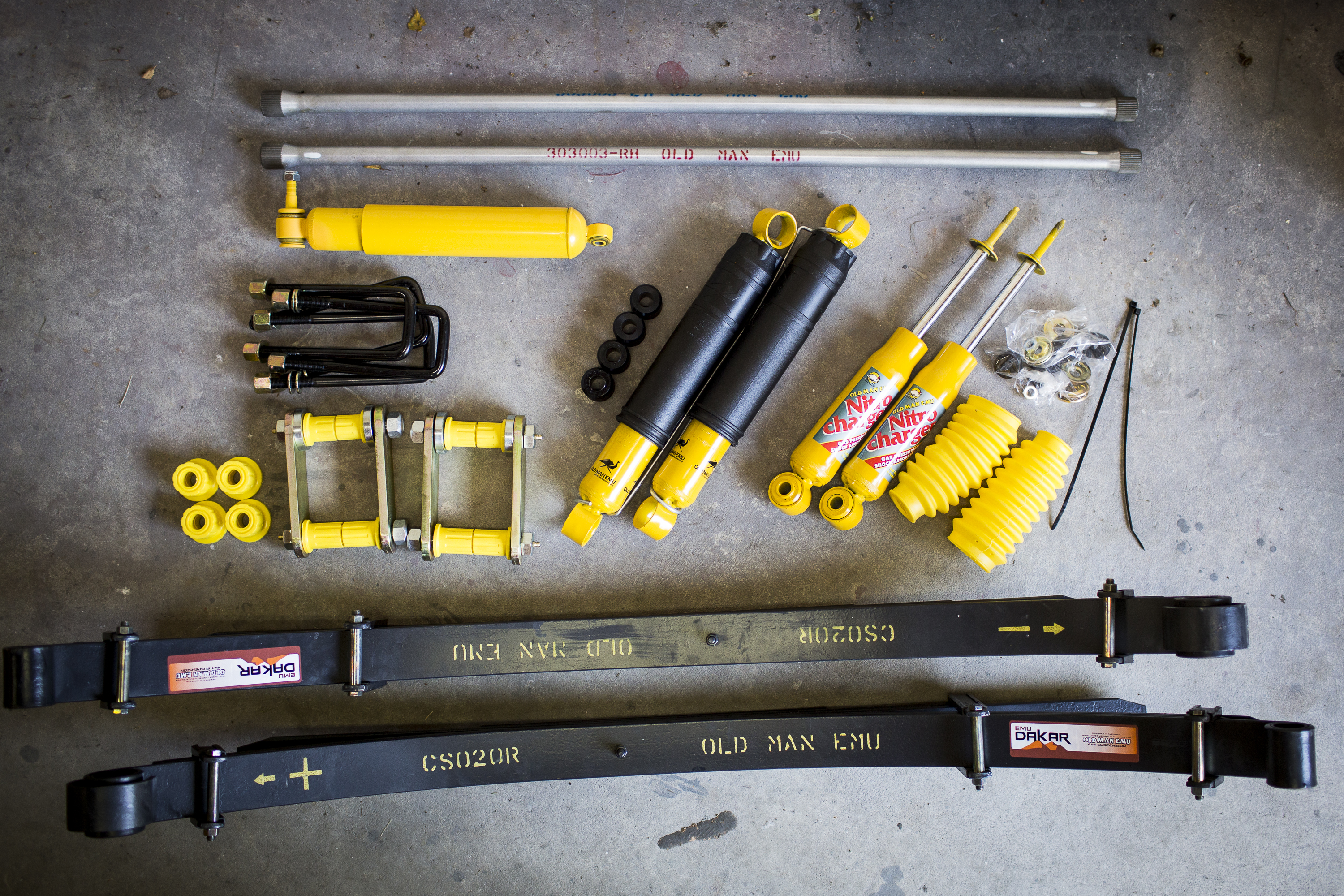 The installation is straightforward but if you’re a little guy like meworking on an old truck you’ll be using lots of penetrating fluid, some really long breaker bars and an angle grinder with a cutoff wheel to ditch most of the old suspension.  I definitely needed a protein shake or two after working my ass off tearing the old suspension out.  Significantly more fun (and productive) than going to the gym. 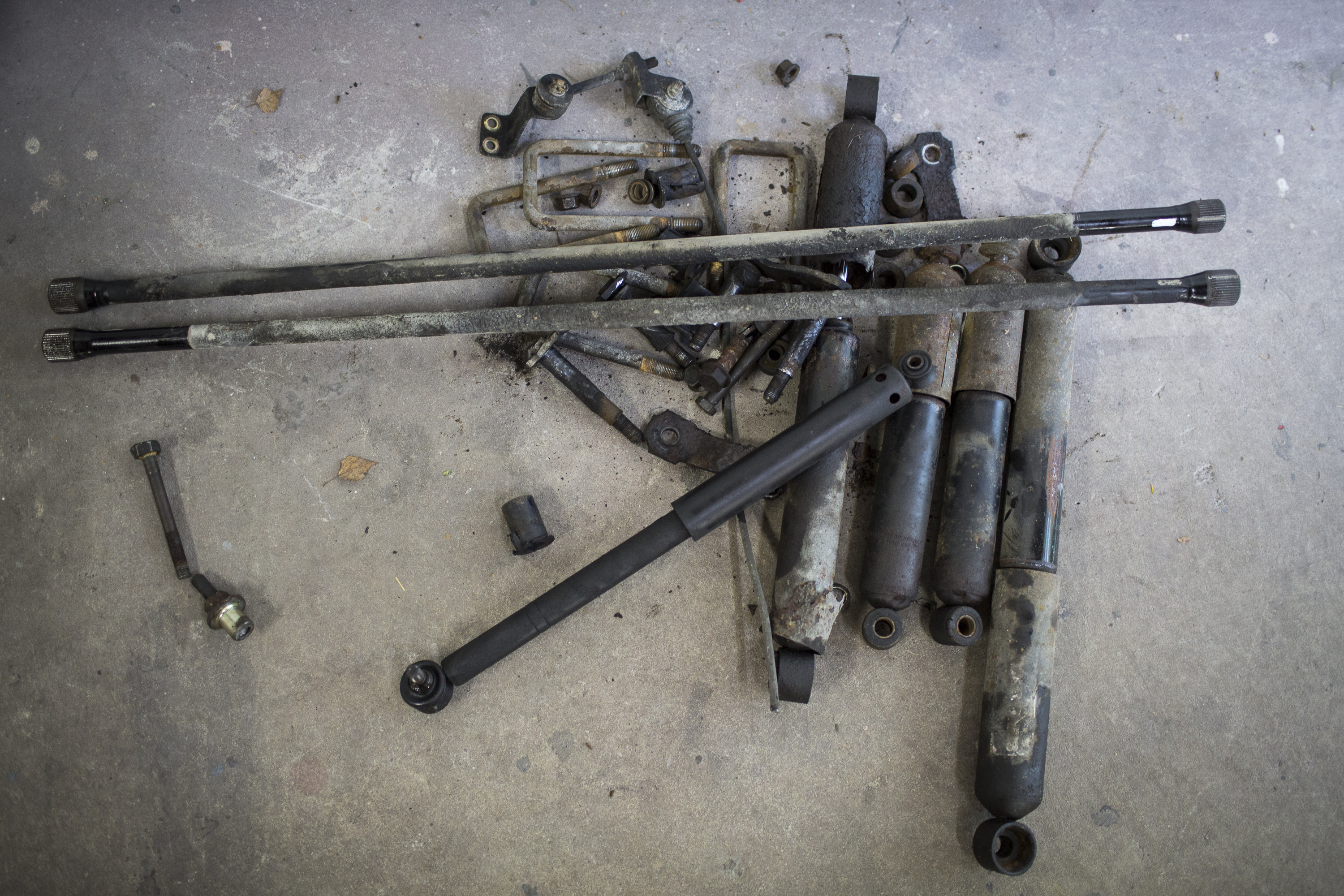 I should have asked for help to make this go a little faster, but I didn’t.  It took me about a day and a half once the dust settled.  This included picking up extra bolts I broke along the way (torsion bar adjuster, front leaf spring hangers, front lower shock mounts).  Do yourself a favour and buy ALL brand new hardware before you start and just cut everything out (unless you actually want a workout.) 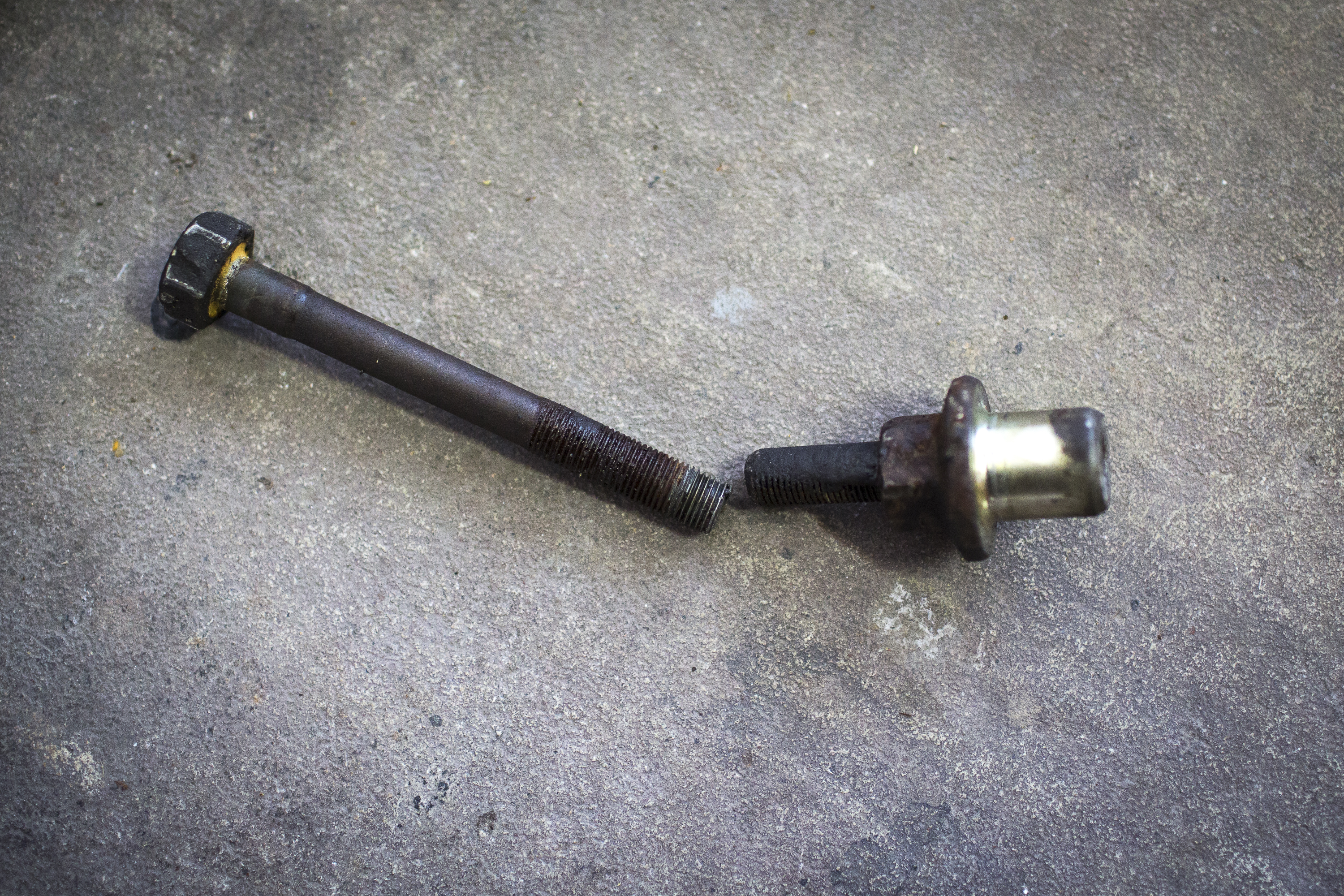 I started with the rear and removed the shocks, shackles, springs, and also the LSPV rod while I was under there.  I’m going to need as much rear bias as possible so the LSPV (load sensing proportioning valve) is adjusted to provide that.  (Don’t let Richard near your truck with an angle grinder that has a zip disc attached, you’ll end up with a pile of “extra” parts when he’s done).  The hardest part of removing the old suspension was getting the old leaf springs out.  They’re not light and the rear shackles/bushings have had 25 years to bond together.  I used a couple of old drill bits to drill out the rubber bushings at the shackles.   The front bolts required the trusty zip disc once again.

Installation was straightforward and opposite of removal.  It’s significantly easier with new parts! 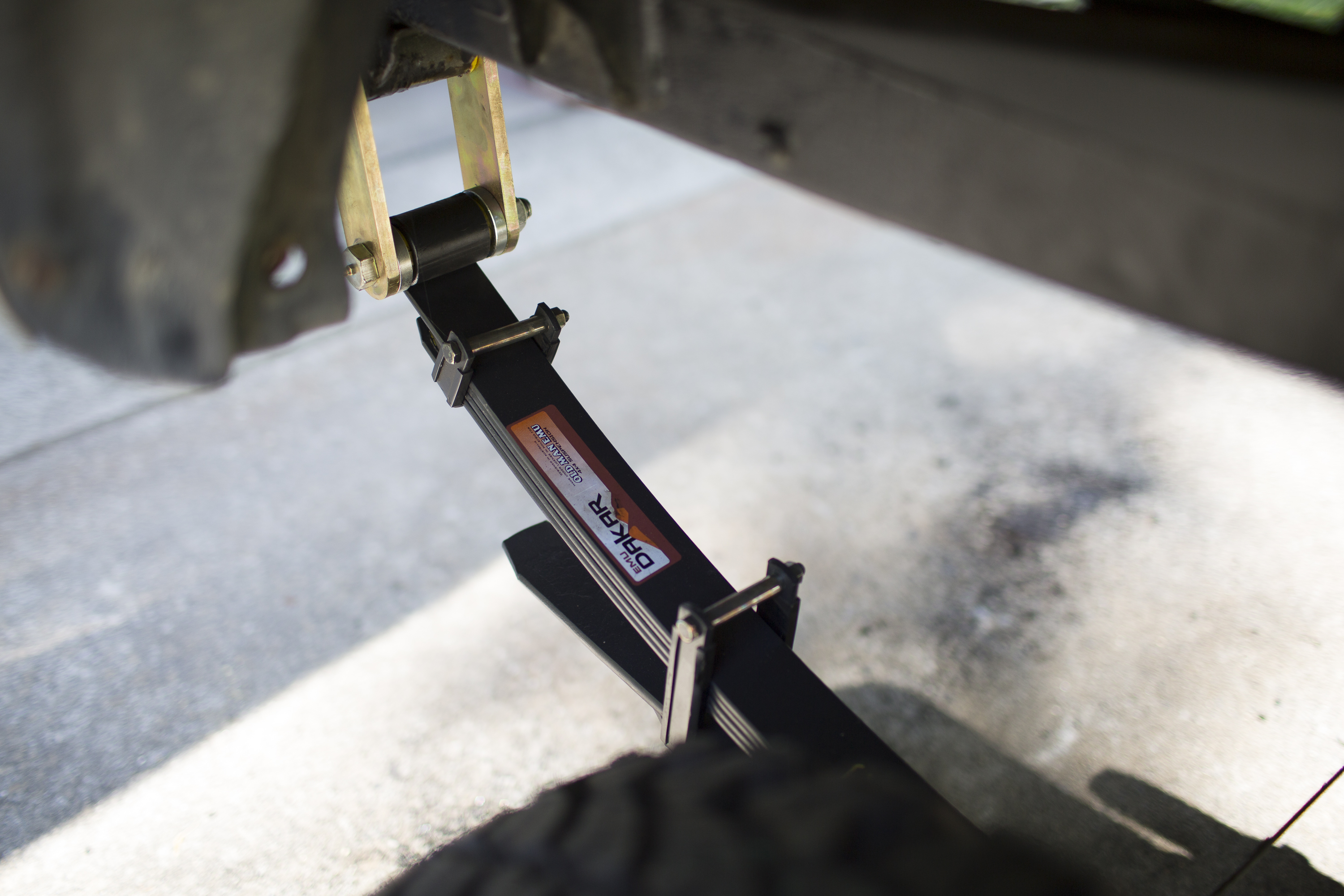 Now for the front!  Brenton from Ruined Adventures said that the torsion bar replacement was easy… and he was right.  Just follow the Toyota FSM instructions and you’ll be done in a couple of hours.

I replaced the sway bar end links as well… but now am reminded to deal with the ball joints, tie rod ends, and brakes… 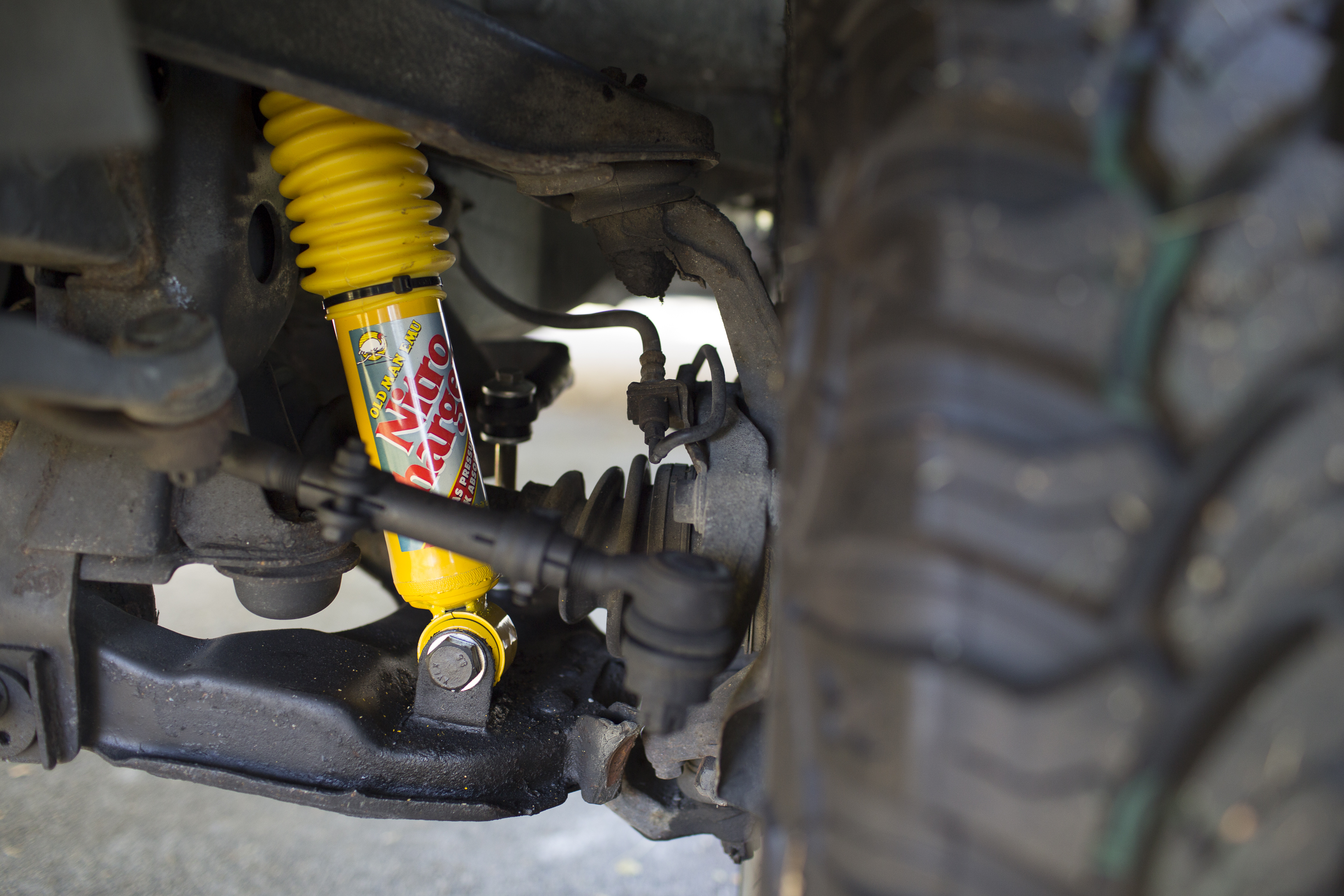 So as it sits now, the truck looks like a jacked up Duster from the 70’s (AWESOME!).  This is what 1.5″ longer shackles combined with OME HD Dakar leaf springs looks like.  There is actually less weight than stock right now (no spare tire, no bumper) so the 6″ lift over stock is expected.  Once we start loading the truck up and the springs settle we’ll see how much it drops.  I expect it’ll level out nicely. 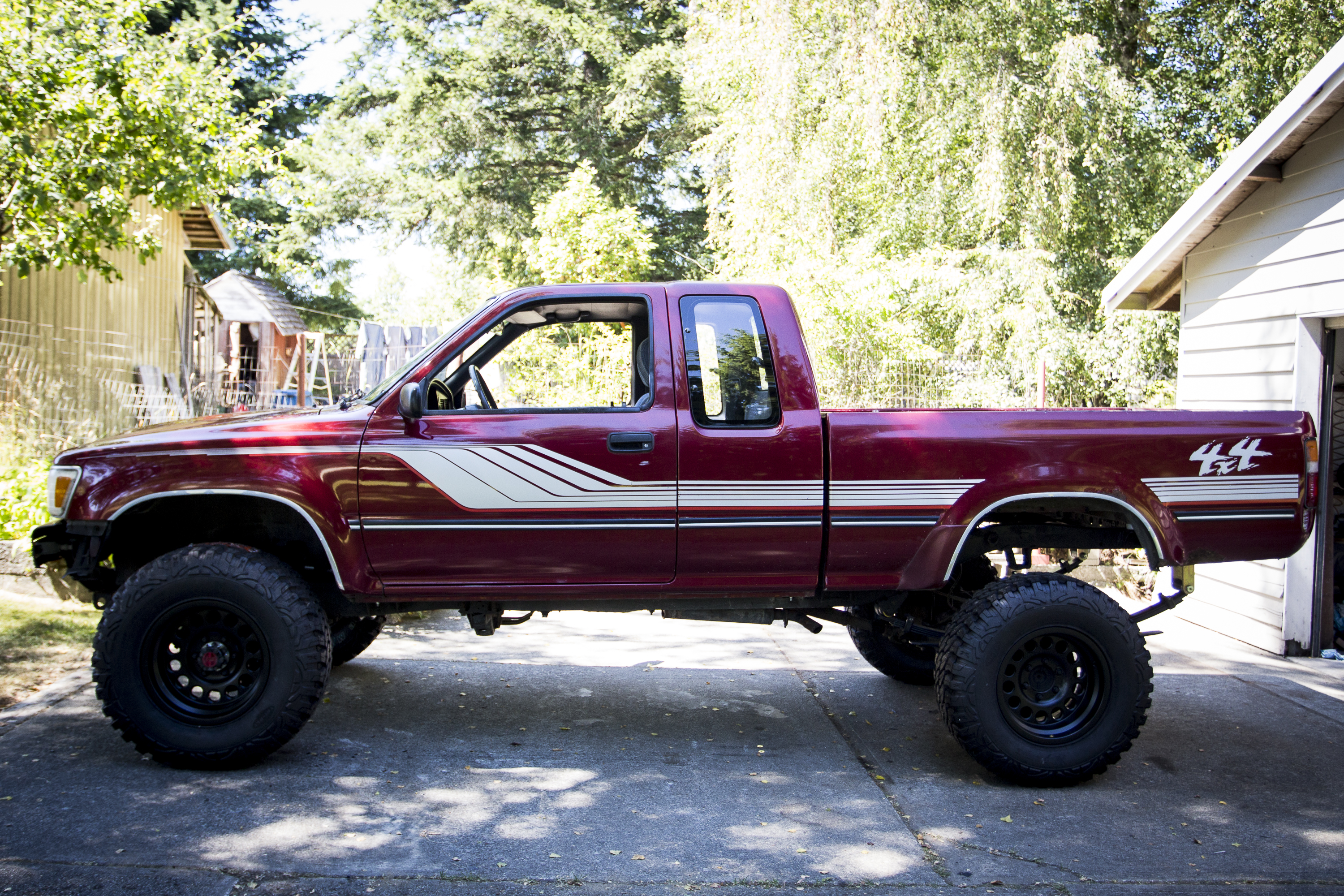 I also installed a pair of Hella Rallye 4000 lights that Hella so kindly gave to us for our journey! 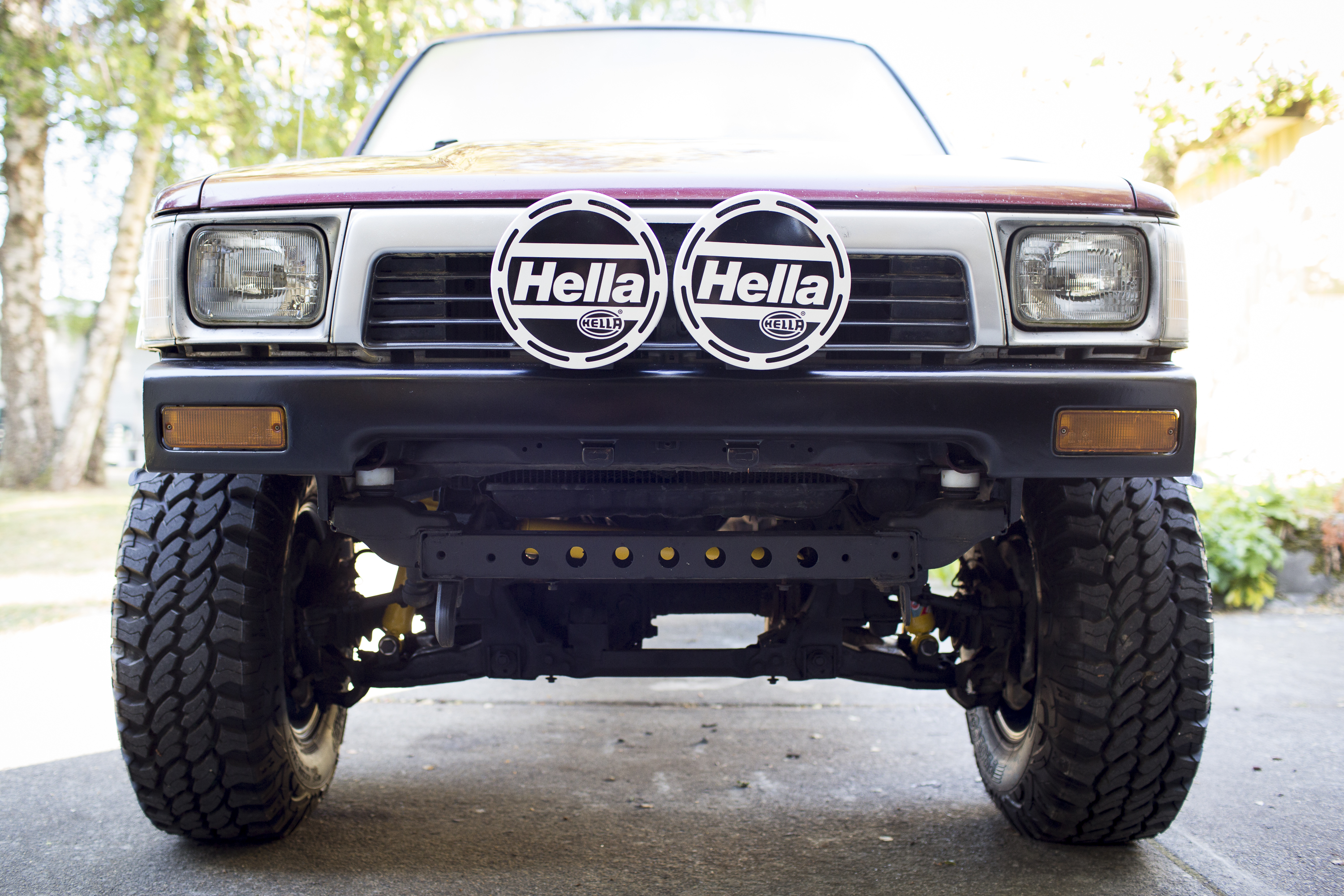 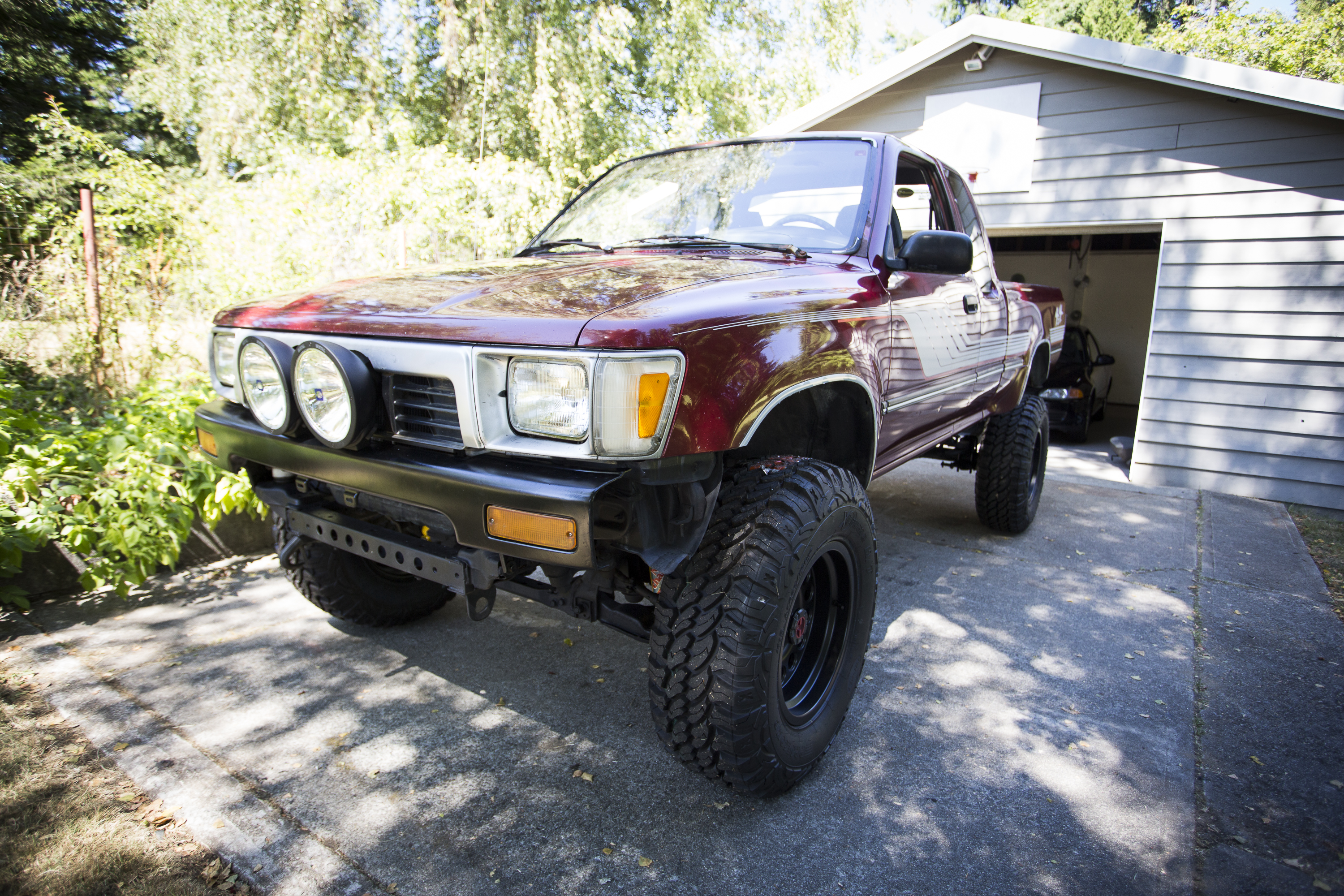 I installed our Alpine CDE-121 CD/MP3/iPod receiver and Type E 6×9 speakers.  Tunes!!  (The front speakers installed by the last owner were in good shape.  Bonus!) 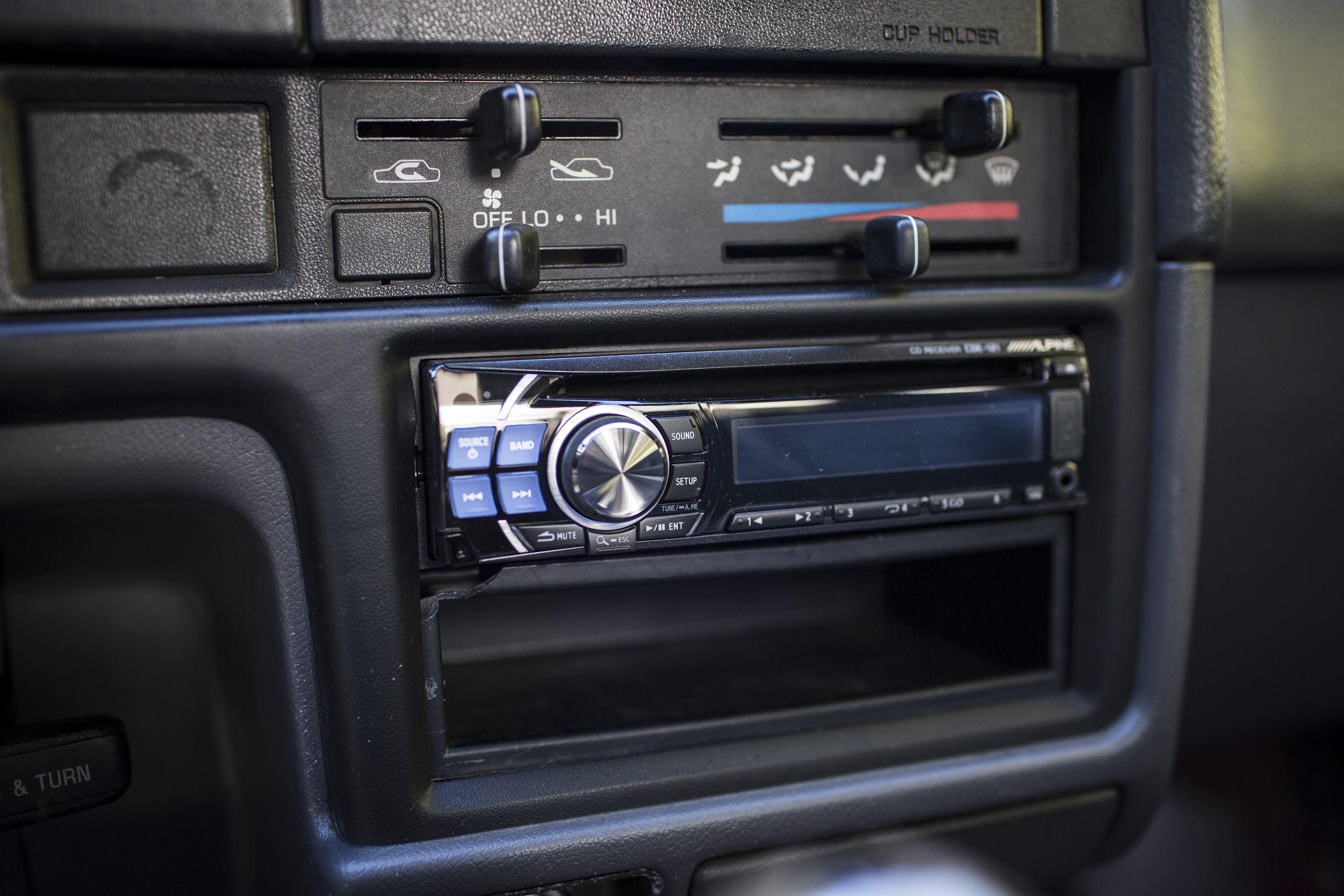 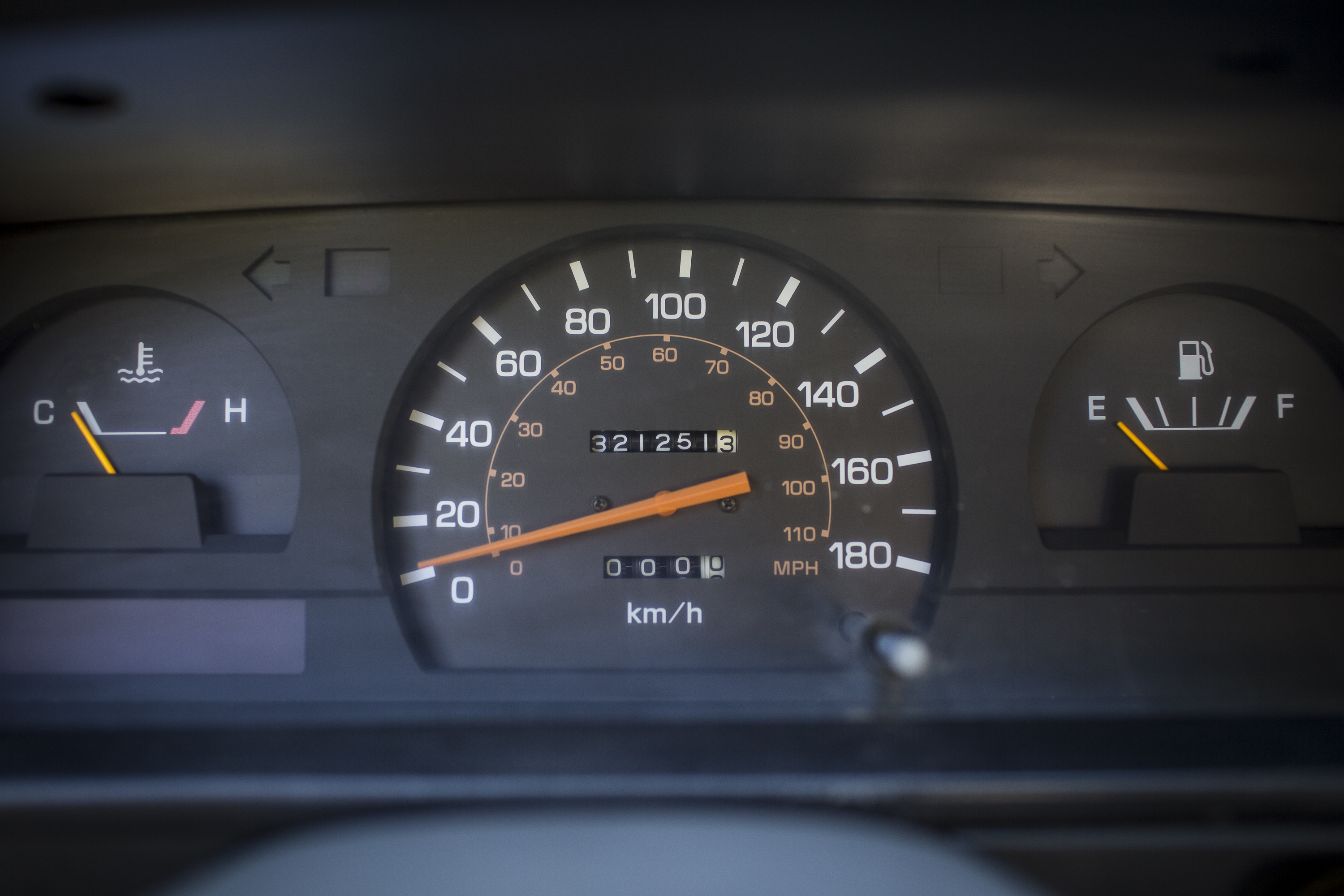 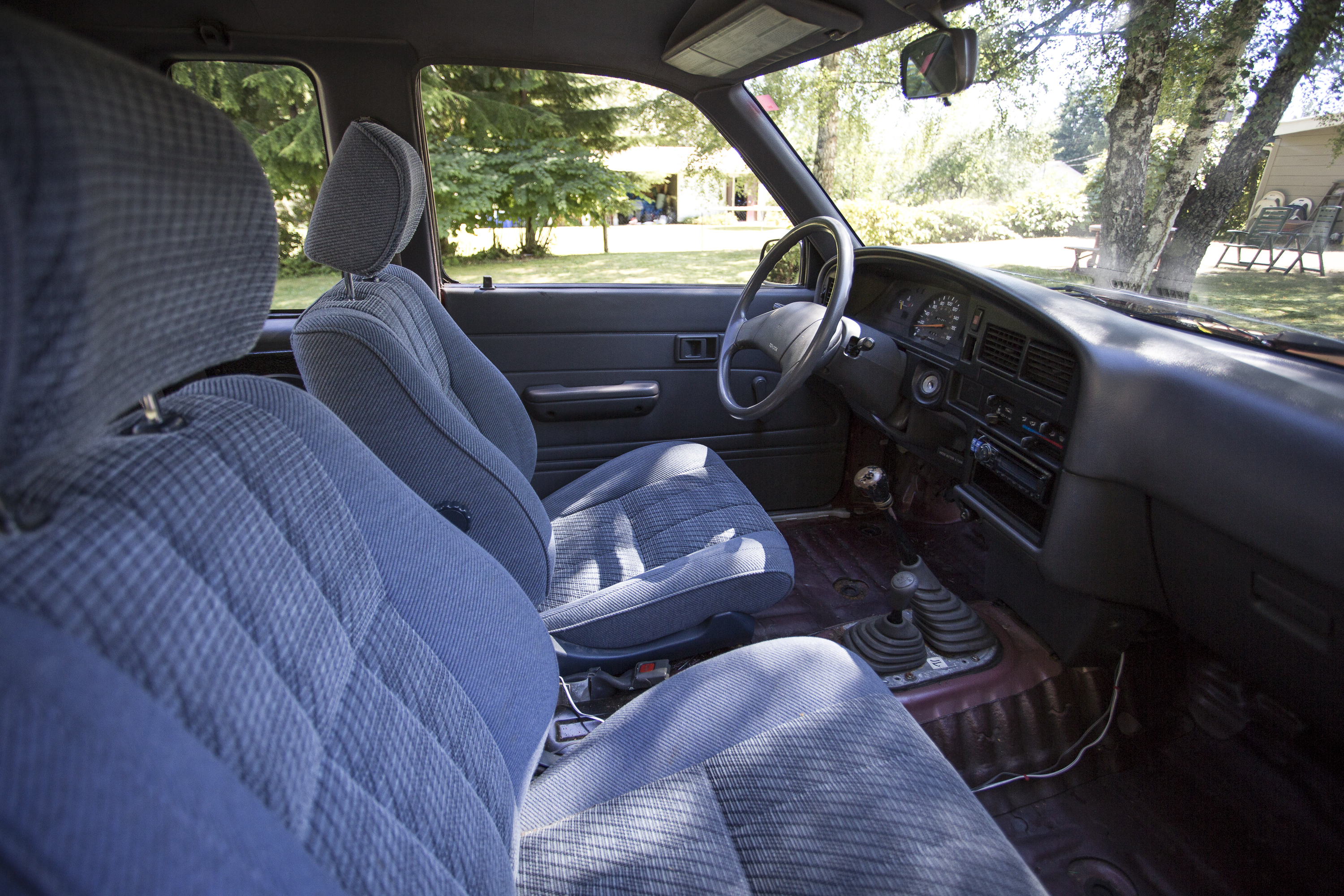