The Sacred Valley of the Incas, formed by the Urubamba River, runs through the central Andes of Peru from Cusco to Machu Picchu.  It is comprised of numerous villages, colonial towns, markets, and archeological sites.  Many sets of Inca ruins (large and small) line the Valley, keeping tourists busy for days.

The Tourist Pass (Boleto Touristico) is the best bang for the buck if you want to visit many of the historical sights in the Sacred Valley. There are multiple options to choose from, and you can buy them at the Visitor’s Centre in Cusco.

Our pass included the Pisac Ruins, Moray, Ollataytambo, and Chinchero.  The only catch is that you have to see all of these sights in two days. Challenge accepted!

The town of Pisac is well-known for its market on Sundays, Tuesdays and Thursdays. It was getting late by the time we arrived so we skipped the market and headed straight up to the Pisac Ruins, situated high in the mountainside above the village.  Back in their heyday the ruins likely served military, agricultural and religious purposes.

We really enjoyed the ruins. They weren’t too crowded, we crawled through caves, clambered over rocks, and snapped photos at the request of some local kidlets along the way. The view really showed the splendour of the Sacred Valley, especially since the day was sunny and clear. But dang, it was super windy! Our hats flew freely off our noggins more than once. 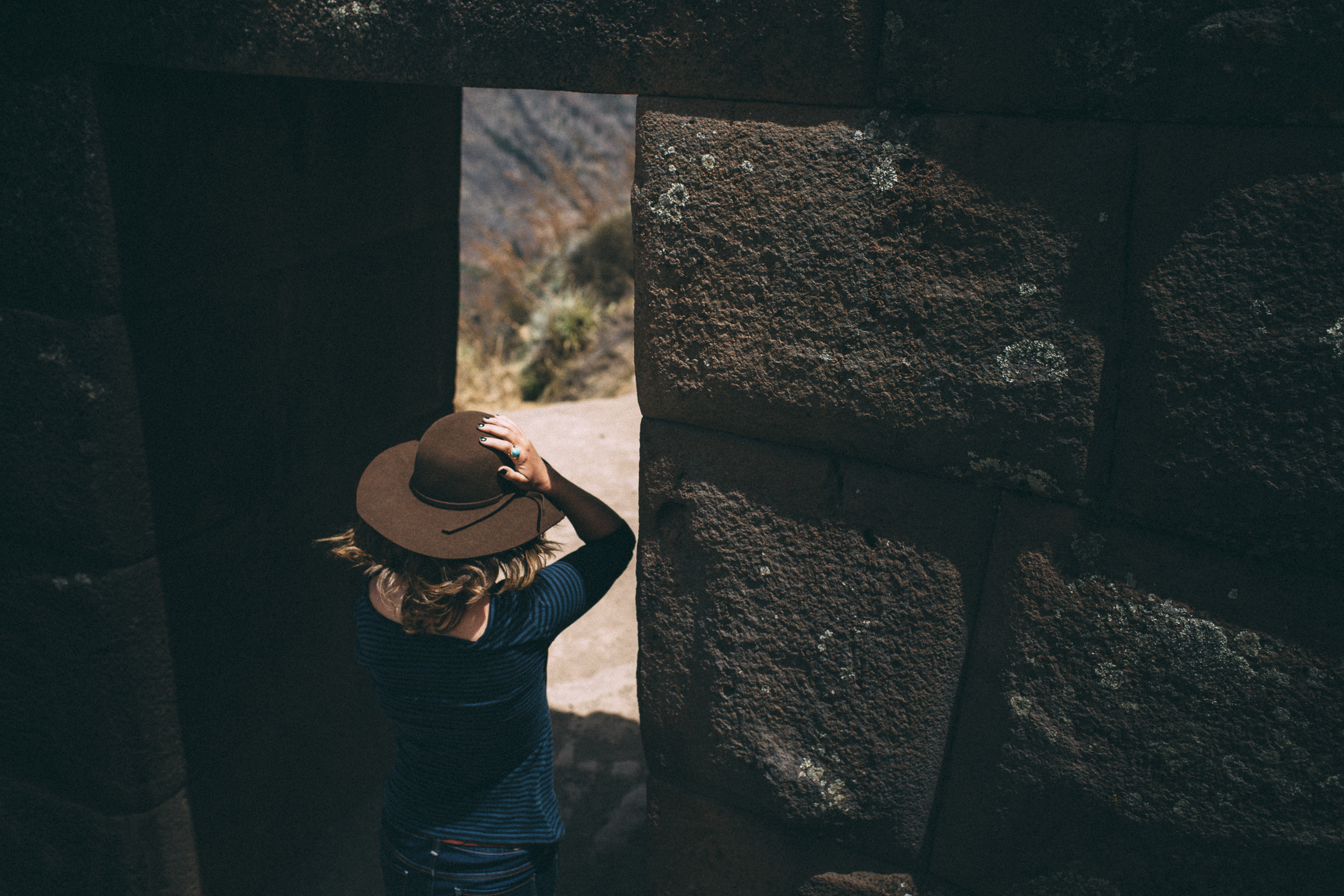 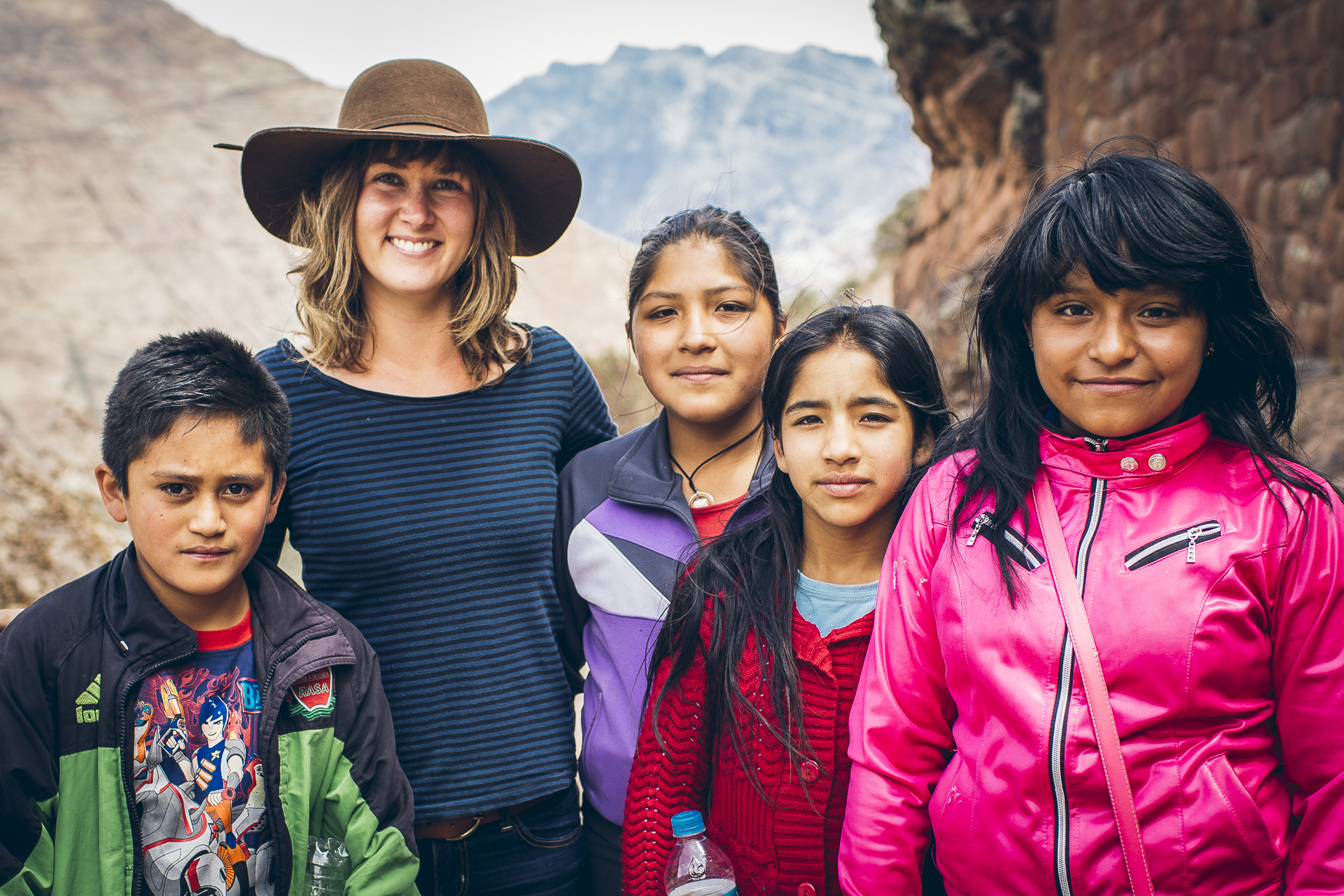 The Inca grew corn, quinoa and potatoes on different sections of the terraces. 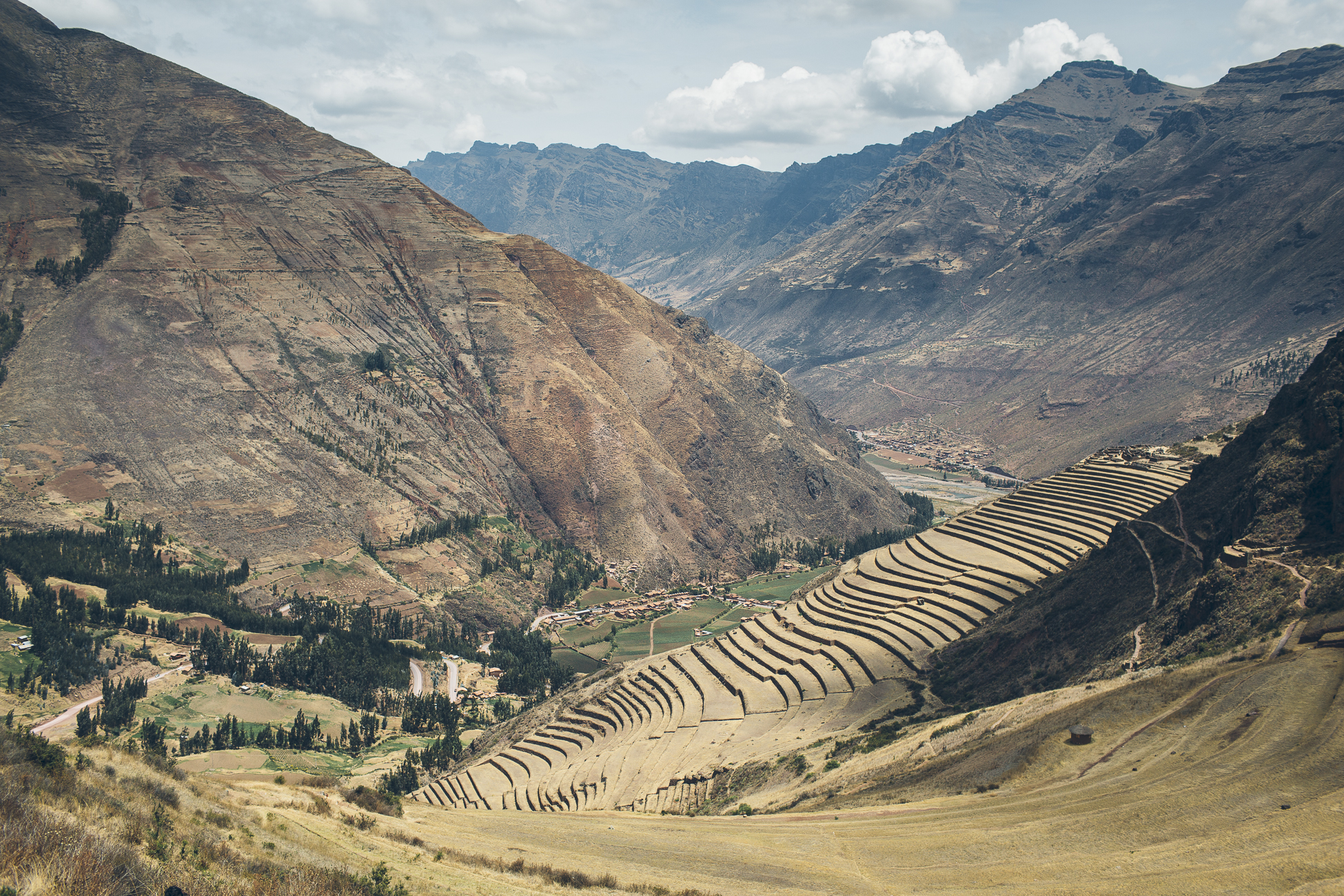 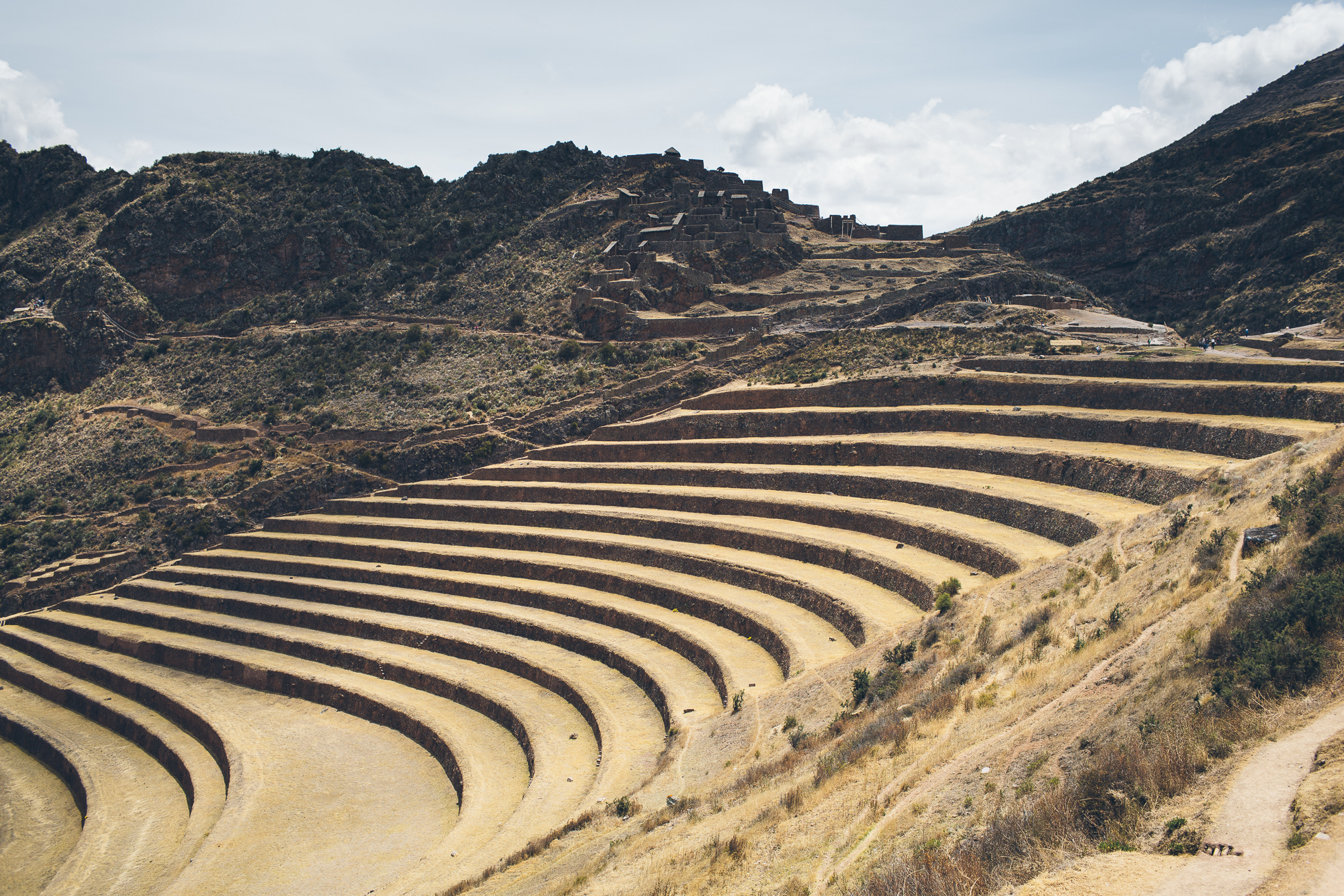 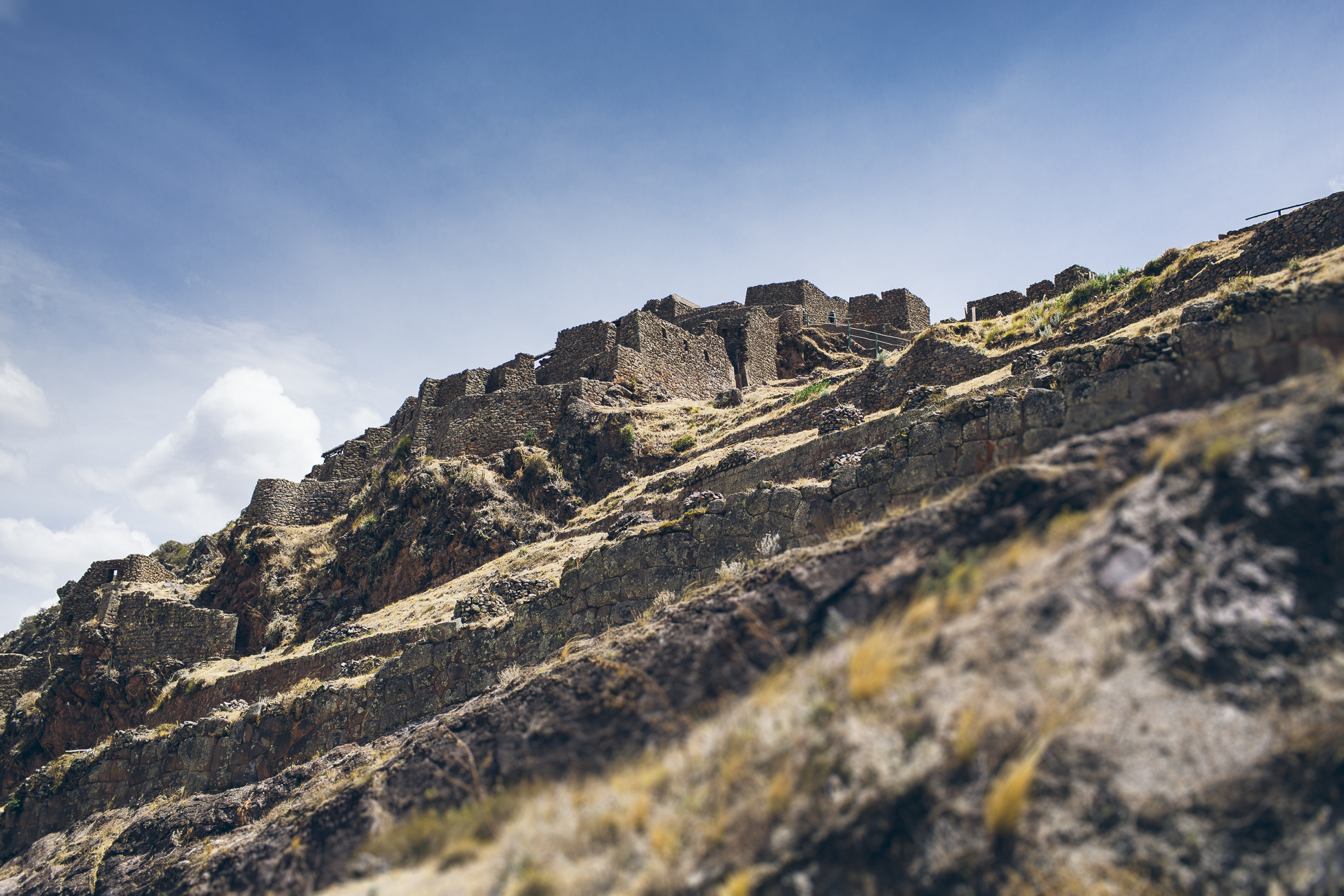 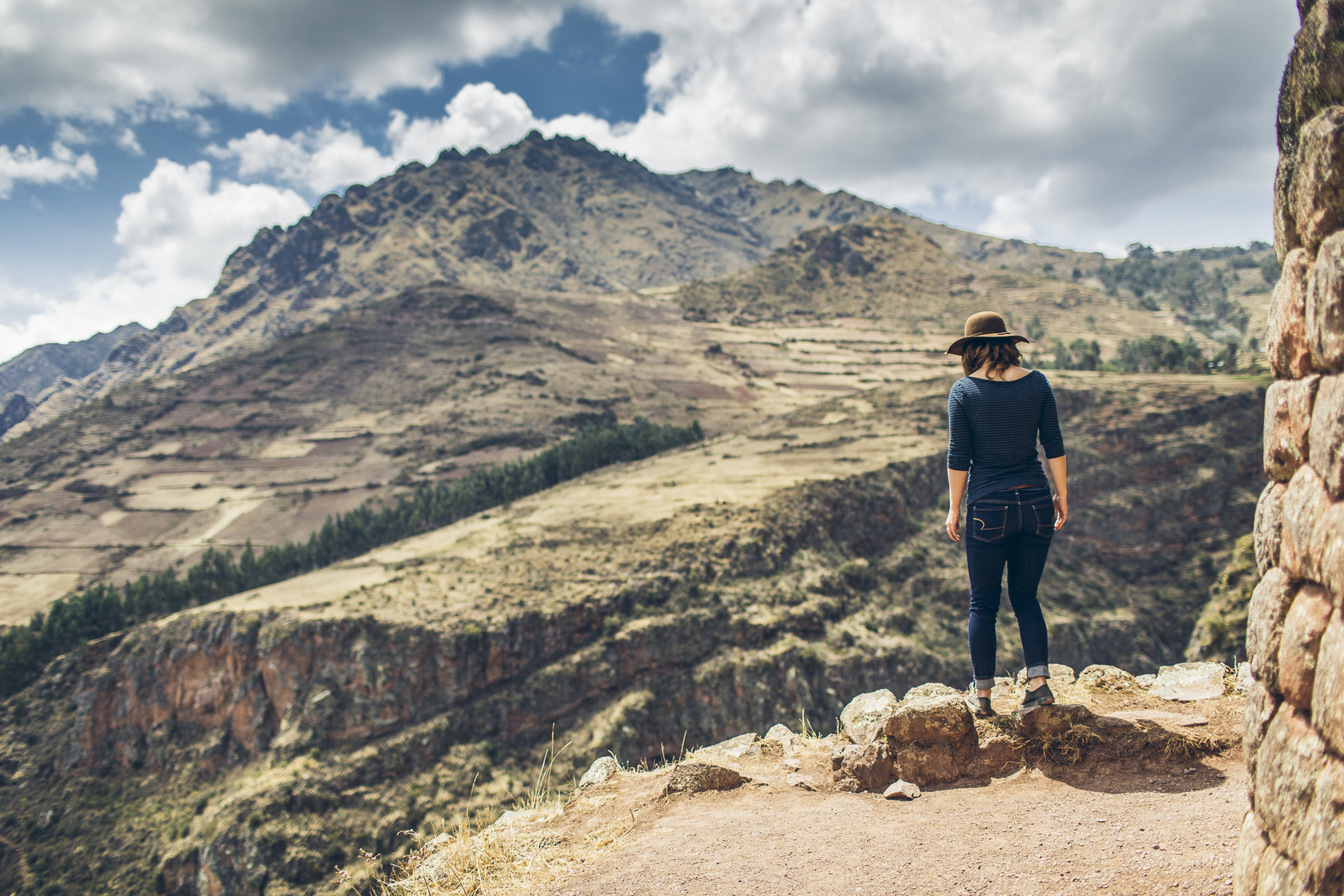 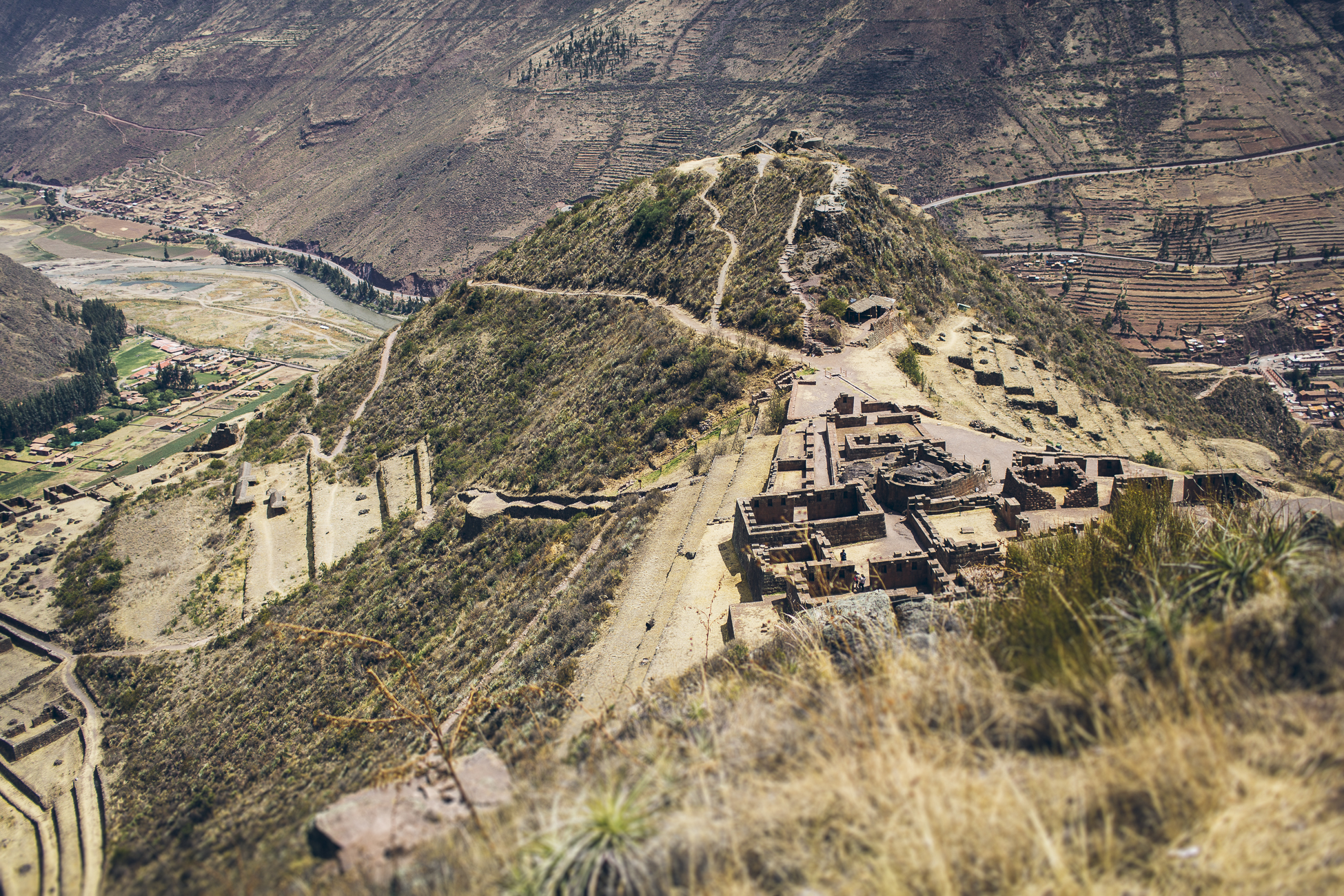 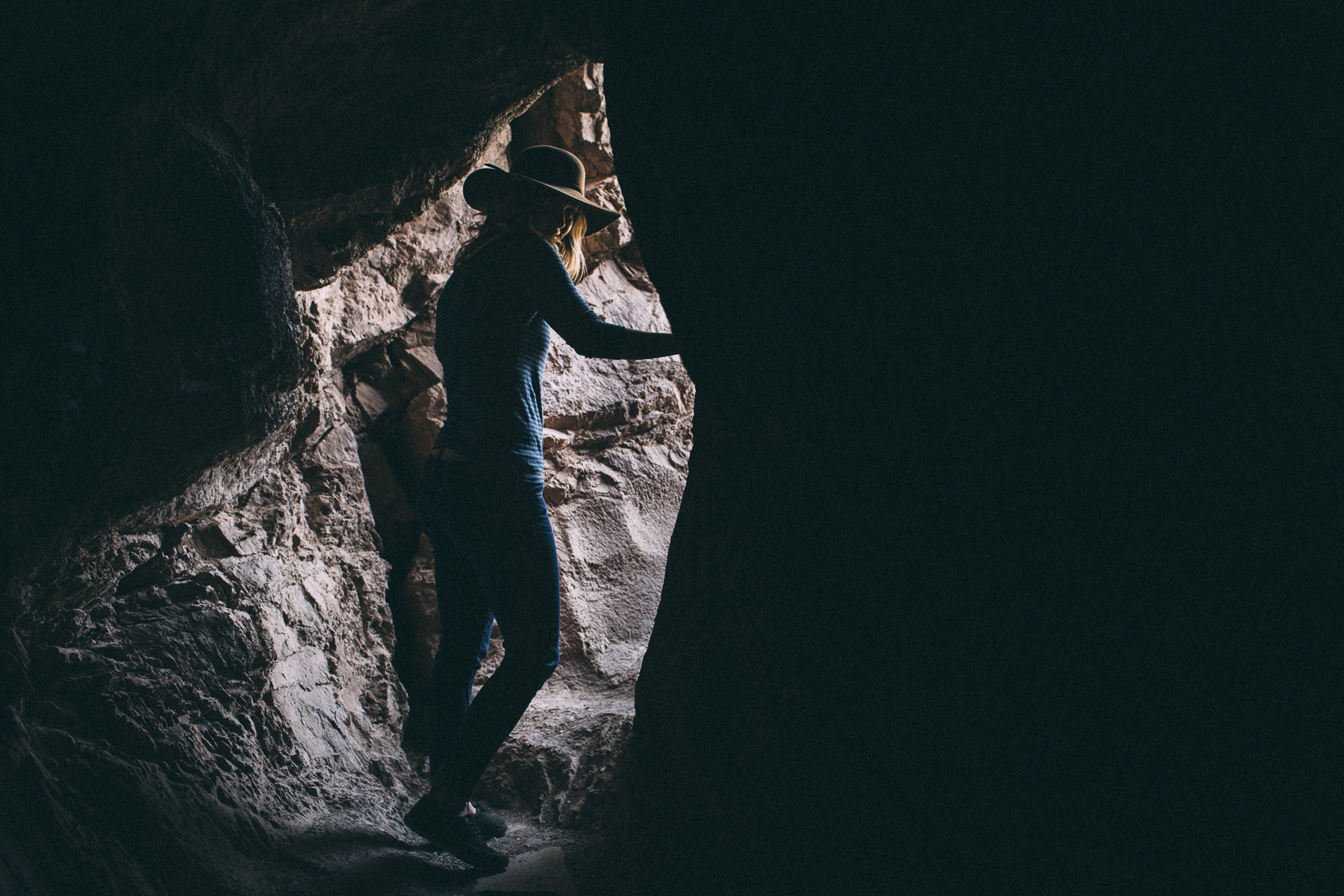 Although the salt terraces were not included in the Boleto Touristico we definitely had to make a stop to see them.  At the initial mirador (viewpoint) we were delighted to get a first glimpse: thousands (3,000 to be exact) of small white rectangular pools highlighted with caramel browns and piles of caked salt spread farther than we ever imagined. From above, the terraces looked like dirty chiclets or computer keys nestled into the centre of the valley.

An underground stream provides the source of the salty water, which emerges at a spring.  From the spring the flow is directed by man-made channels into these terraced ponds.  Here the sun-warmed water gradually evaporates, leaving behind a thick crust of mineral-rich salty goodness.  This goodness is hand-harvested by the owners of the pans, who are required to be members of the community.  This system has been in use since pre-Inca times (pre-1430 AD). 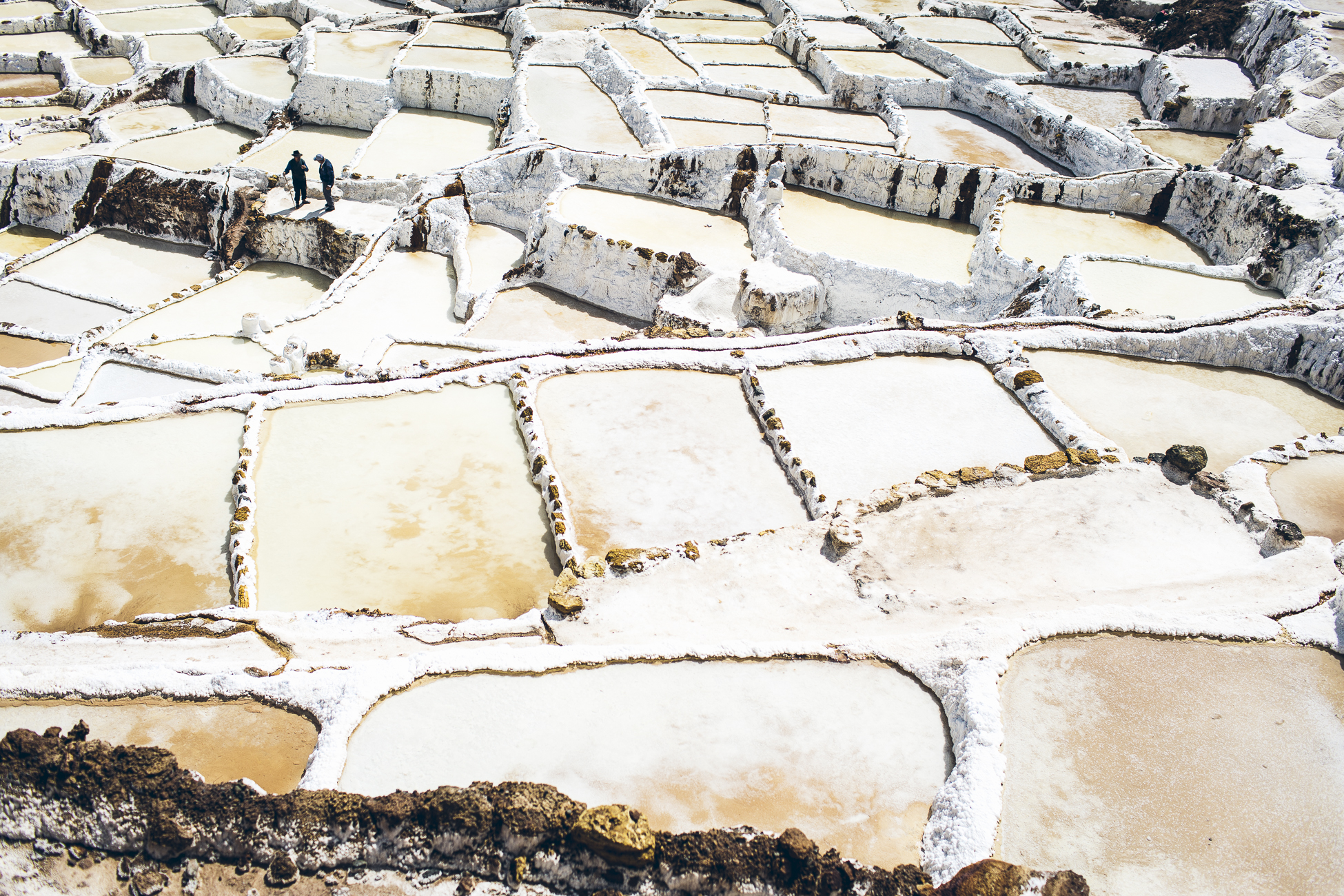 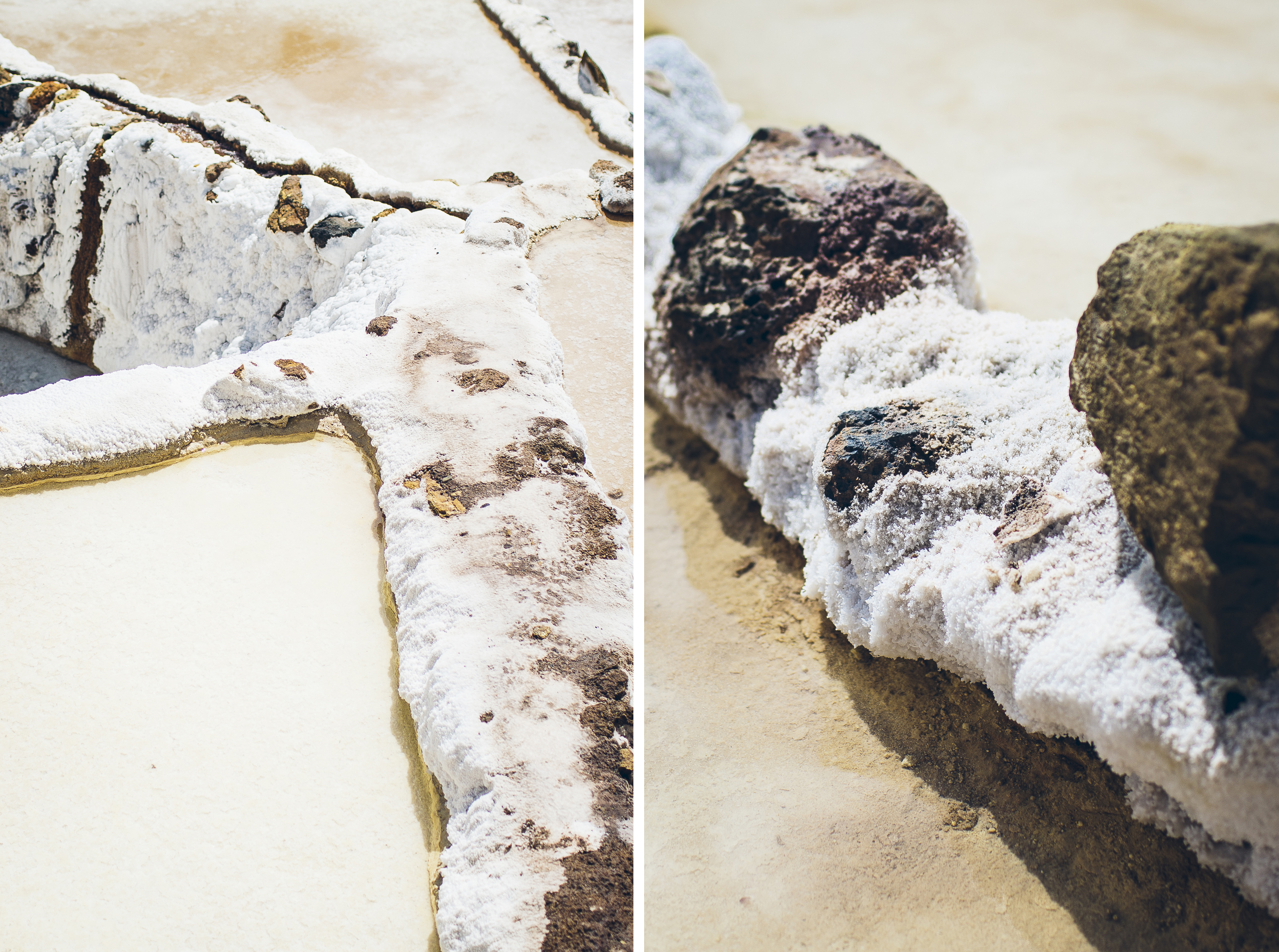 Curious, I touched one of the pyramid-shaped piles of salt to see what it was like.  Surprisingly the thing was rock solid. 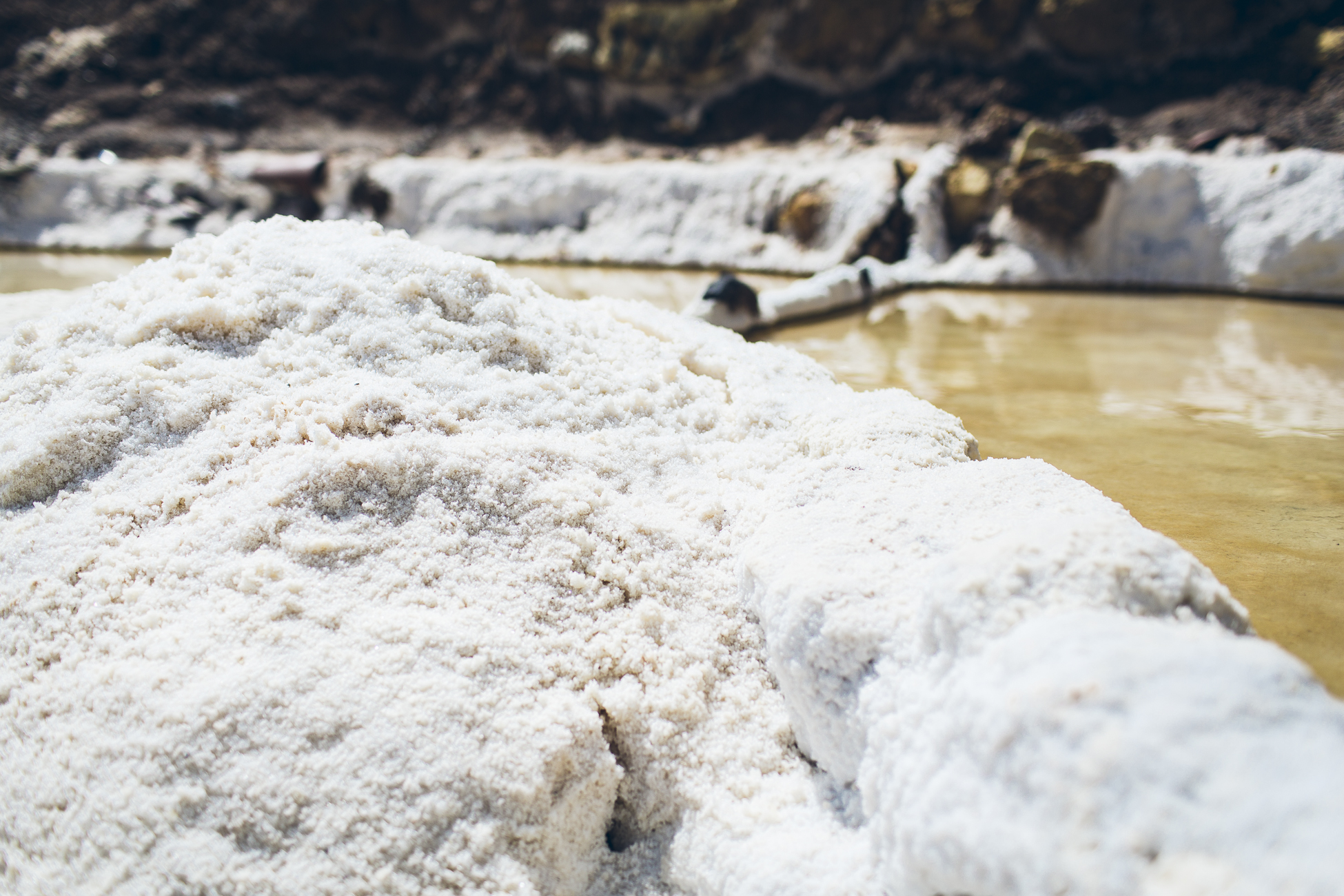 Our next stop: the archeological site of Moray.  We arrived in the evening and explored the giant terraces, which were likely once used for agricultural experimentation.  A large temperature difference exists between the top level and the bottom, presumably an effective means of growing different types of crops necessitating different climates.  Standing on the path at the bottom of the terraces, the scene really reminded us of a giant amphitheatre.  Or some weird alien spaceship cut-out in the mossy earth.

Unfortunately this archeological site has been quite susceptible to erosion and was permanently damaged by excess rainfall in recent years. 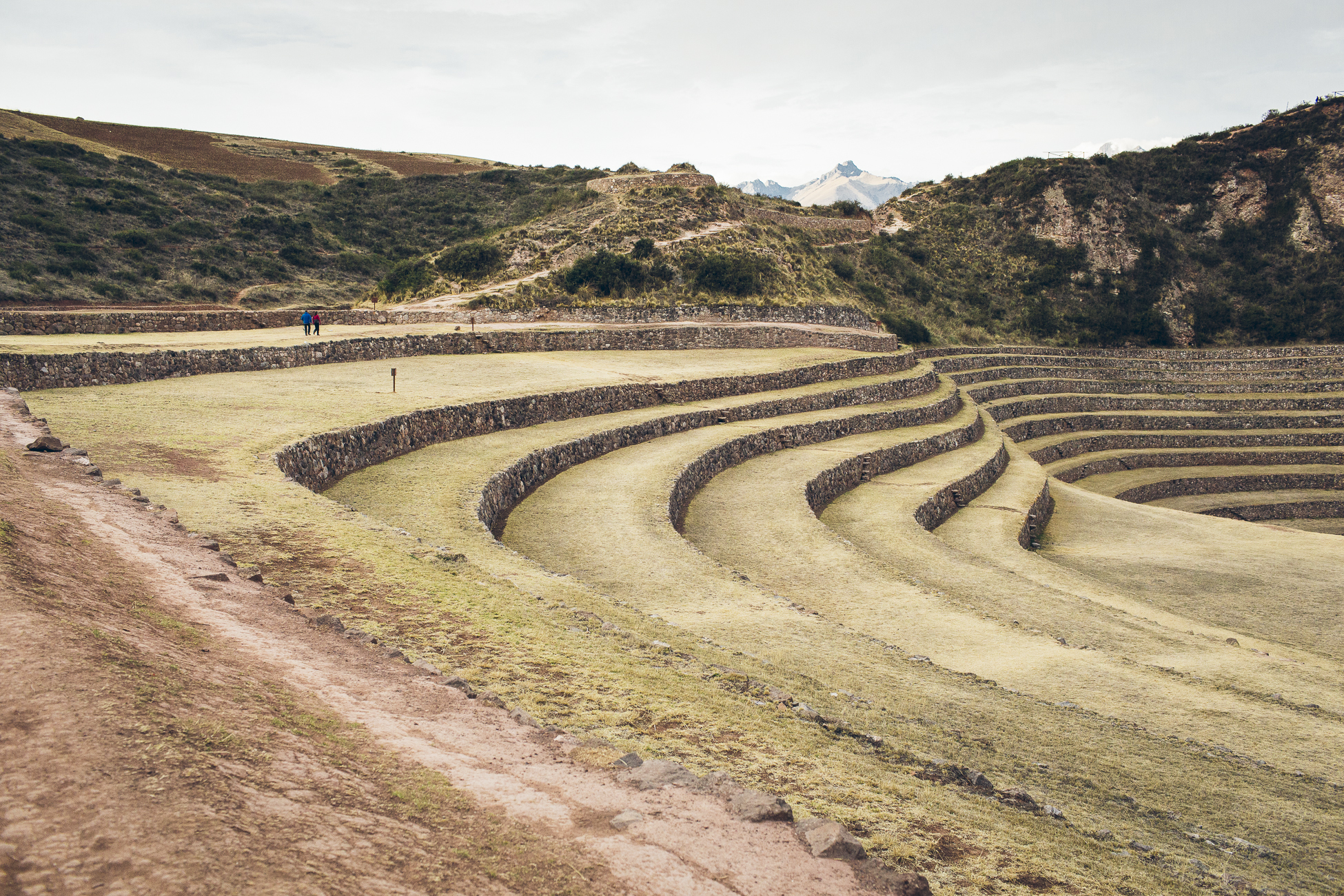 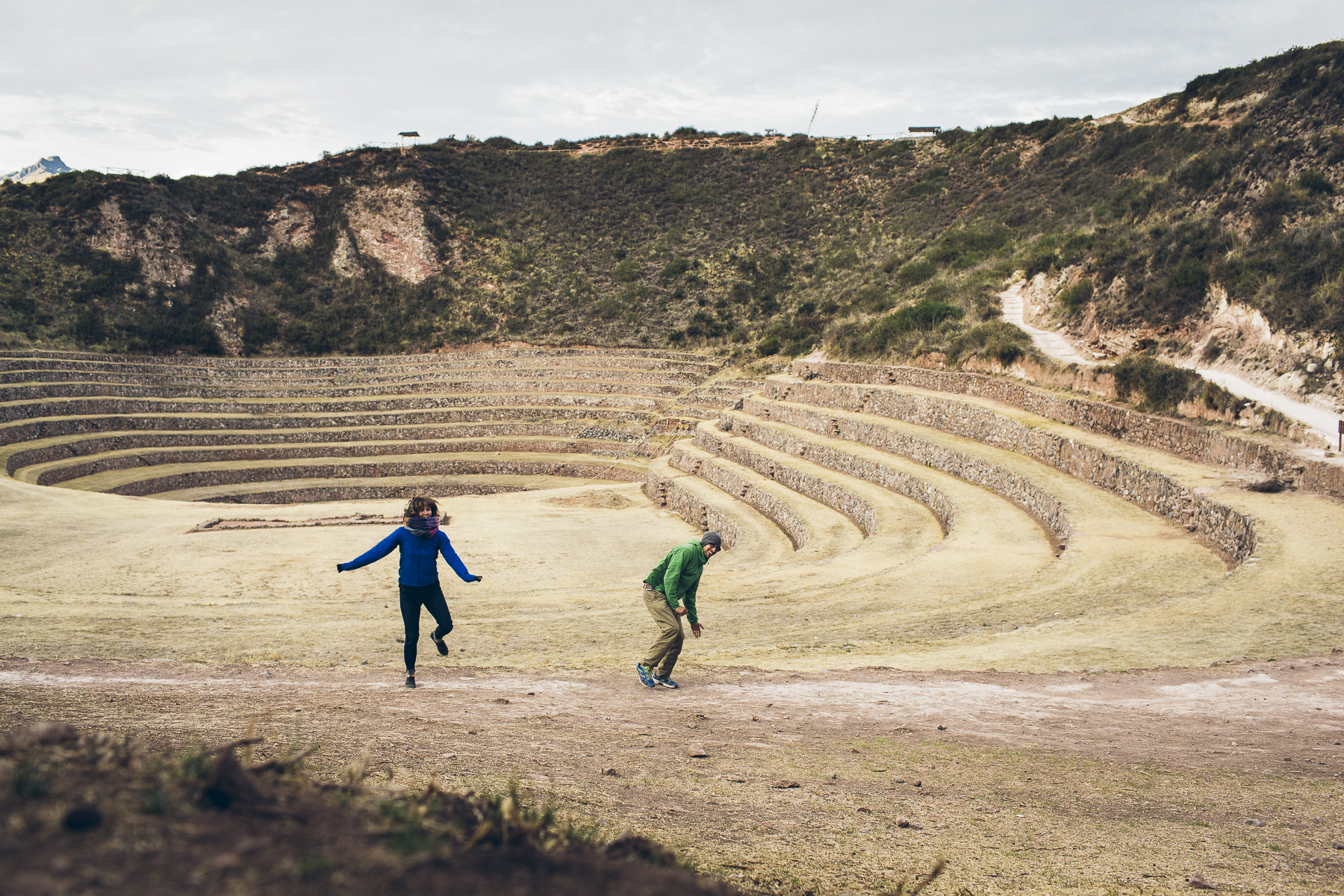 There were two of these circular structures almost side by side, which were quite beautiful in the evening with the Andes looming in the background. 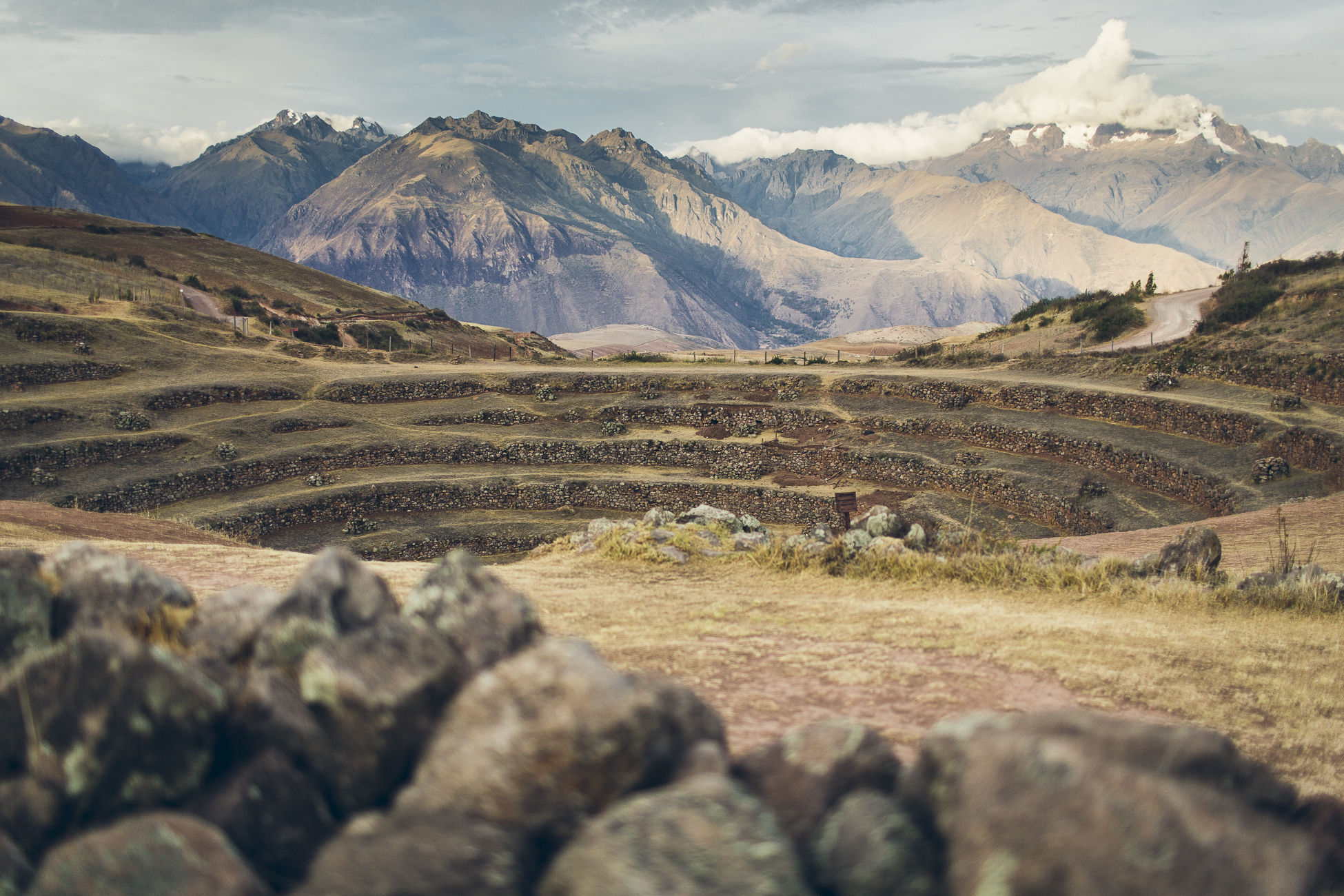 We parked Little Red near the ruin site with this smokin’ view. 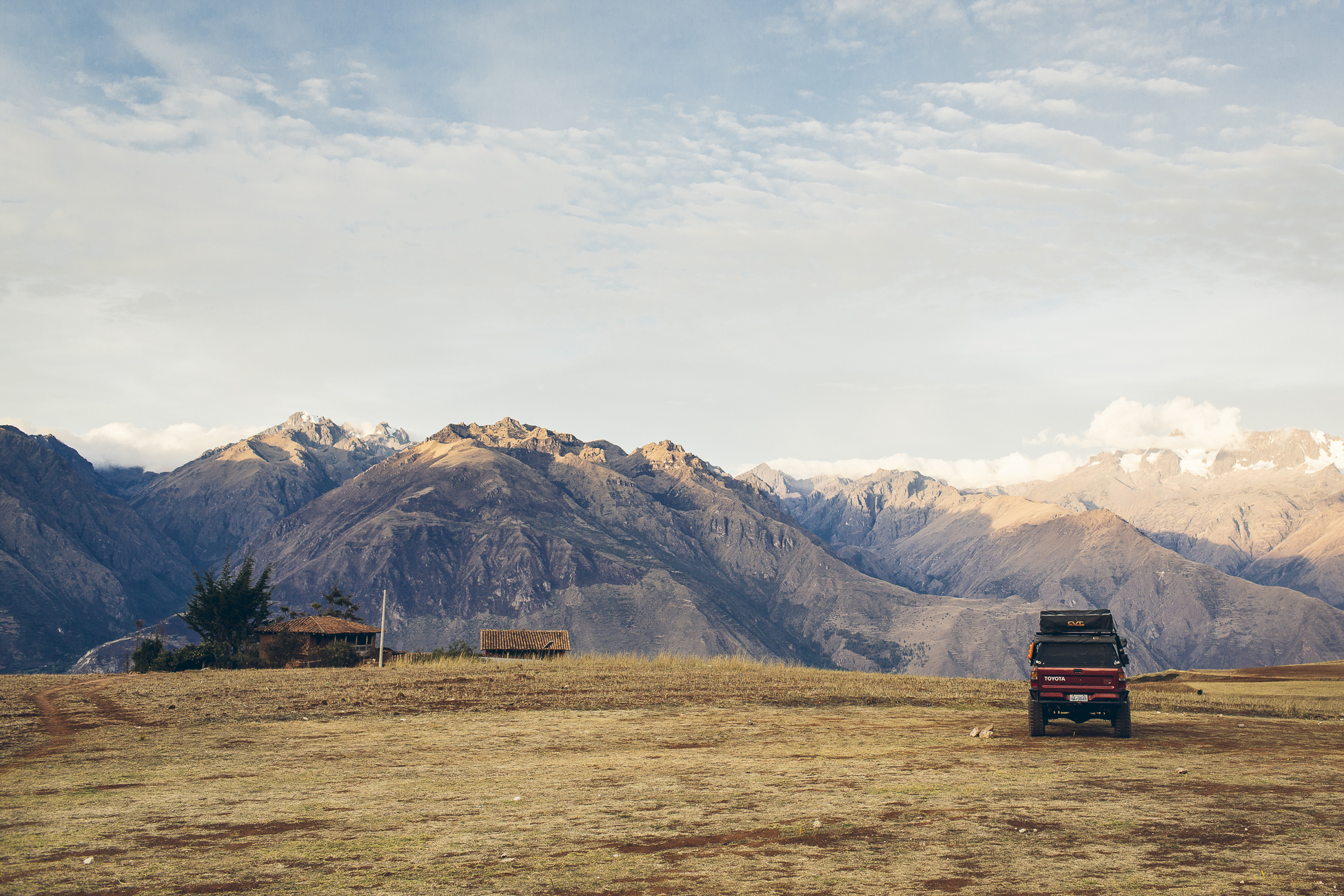 We arrived in Ollataytambo rattling along the stone-crafted roads and had our first glimpse of the pyramid-like Fortress. 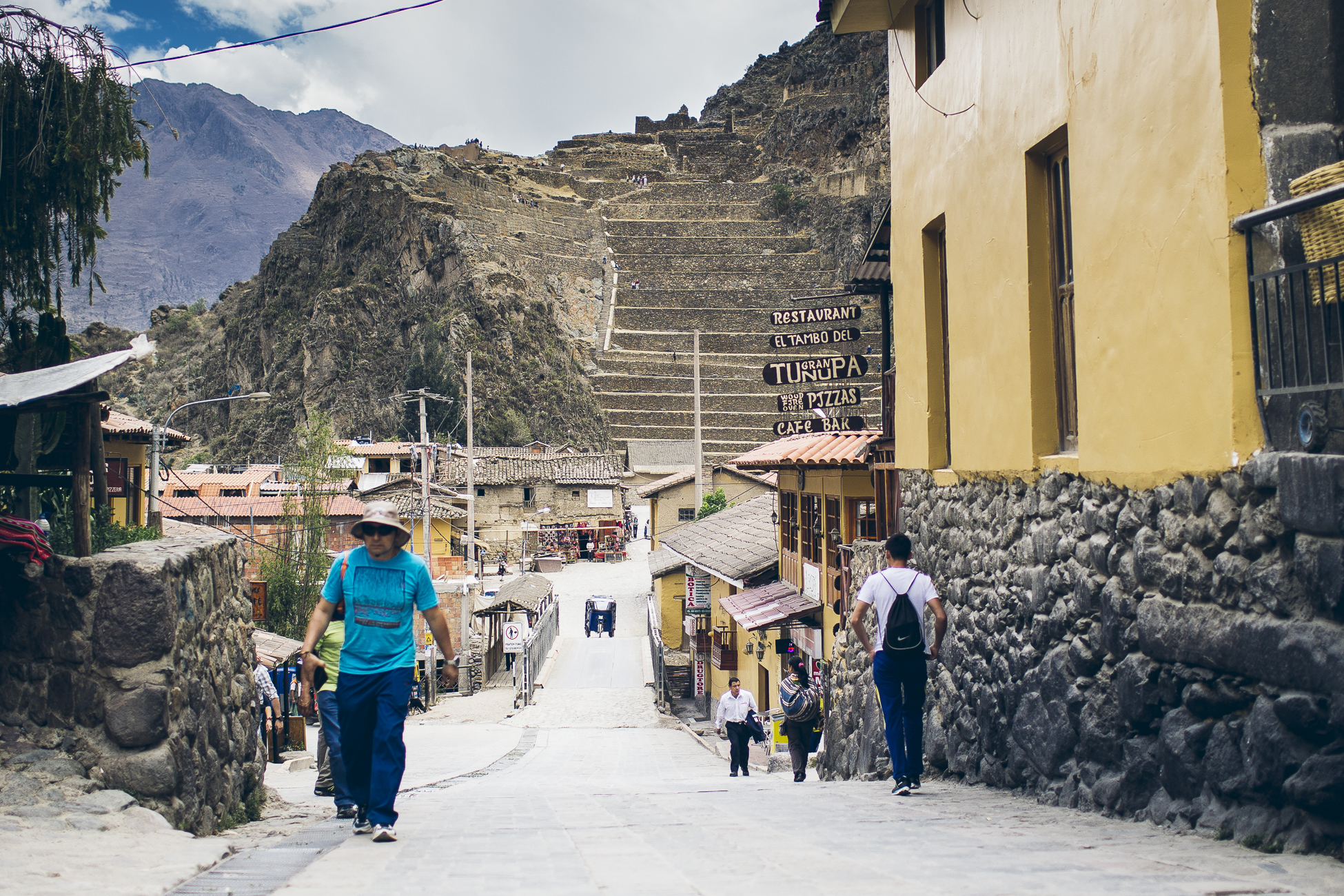 The Ollantaytambo Fortress marks the location of one of the Incas’ only successful battles against the Spanish Conquistadors. This stronghold was temporary as the fortress was eventually captured.  The site is somewhat typical of the Inca empire complete with terraces, an irrigation system, and a ton of stone work.

This is the view of the town of Ollataytambo with the ruins behind us. 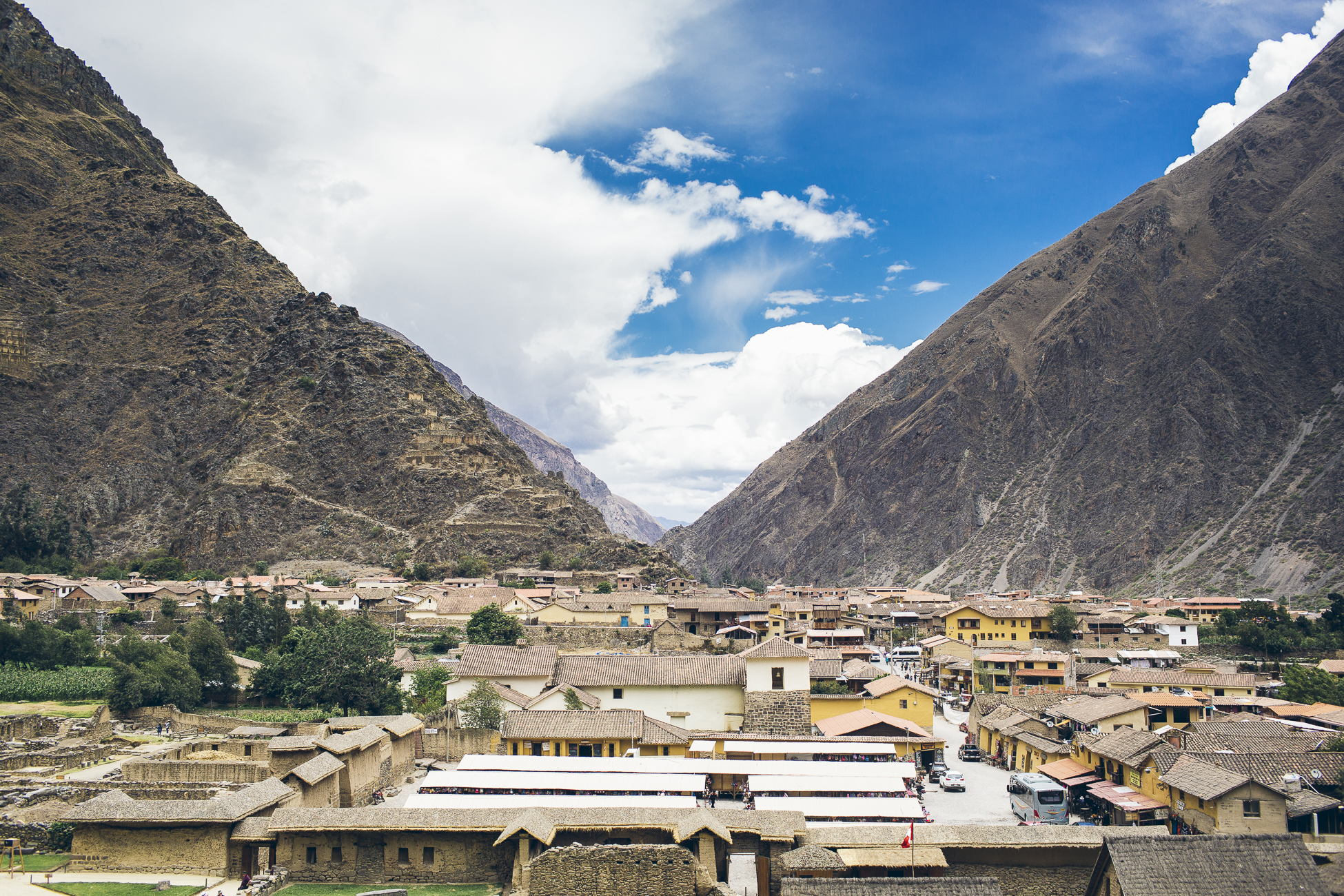 The Incas carved crop storage houses into the mountainside, viewed directly across from the fortress. 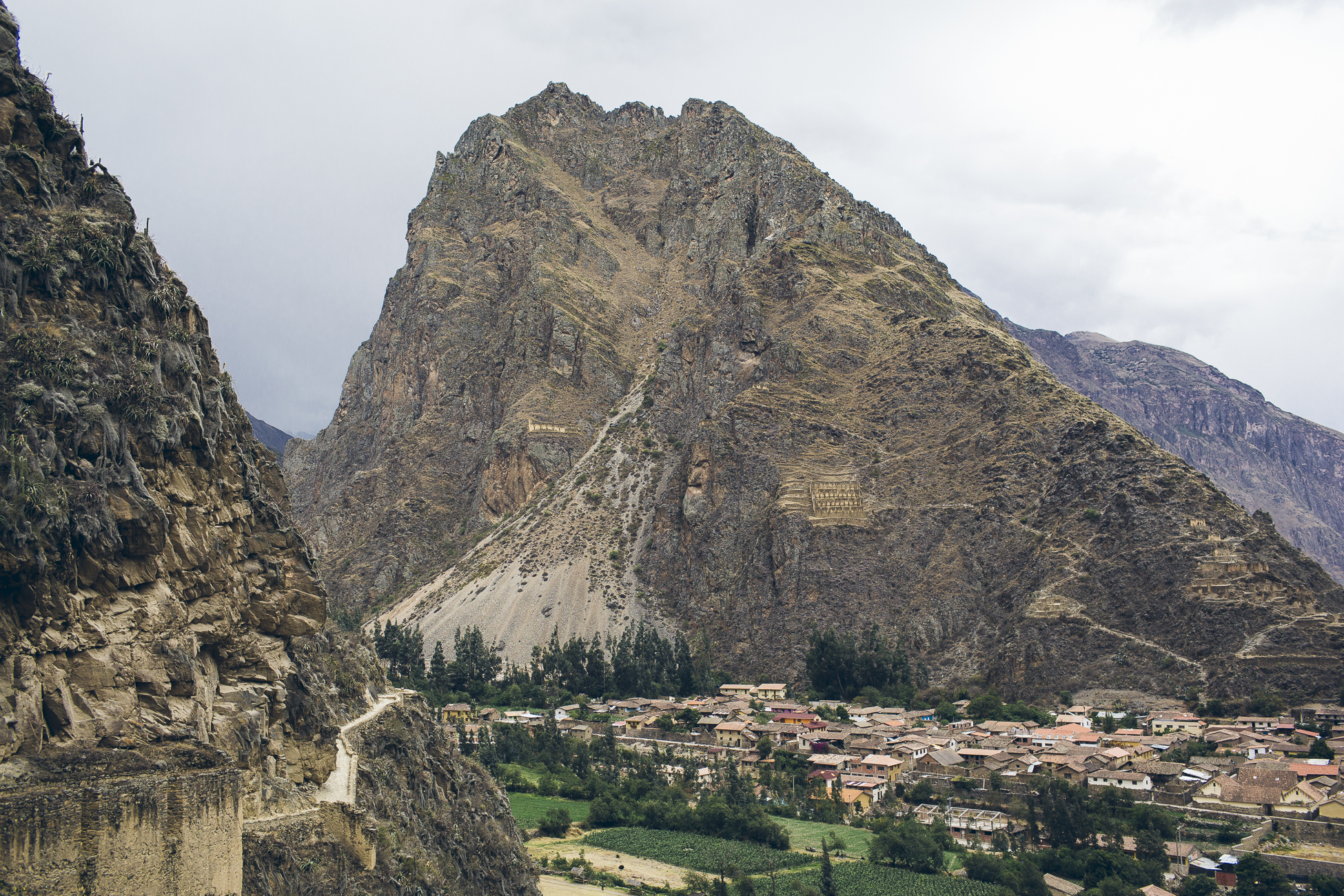 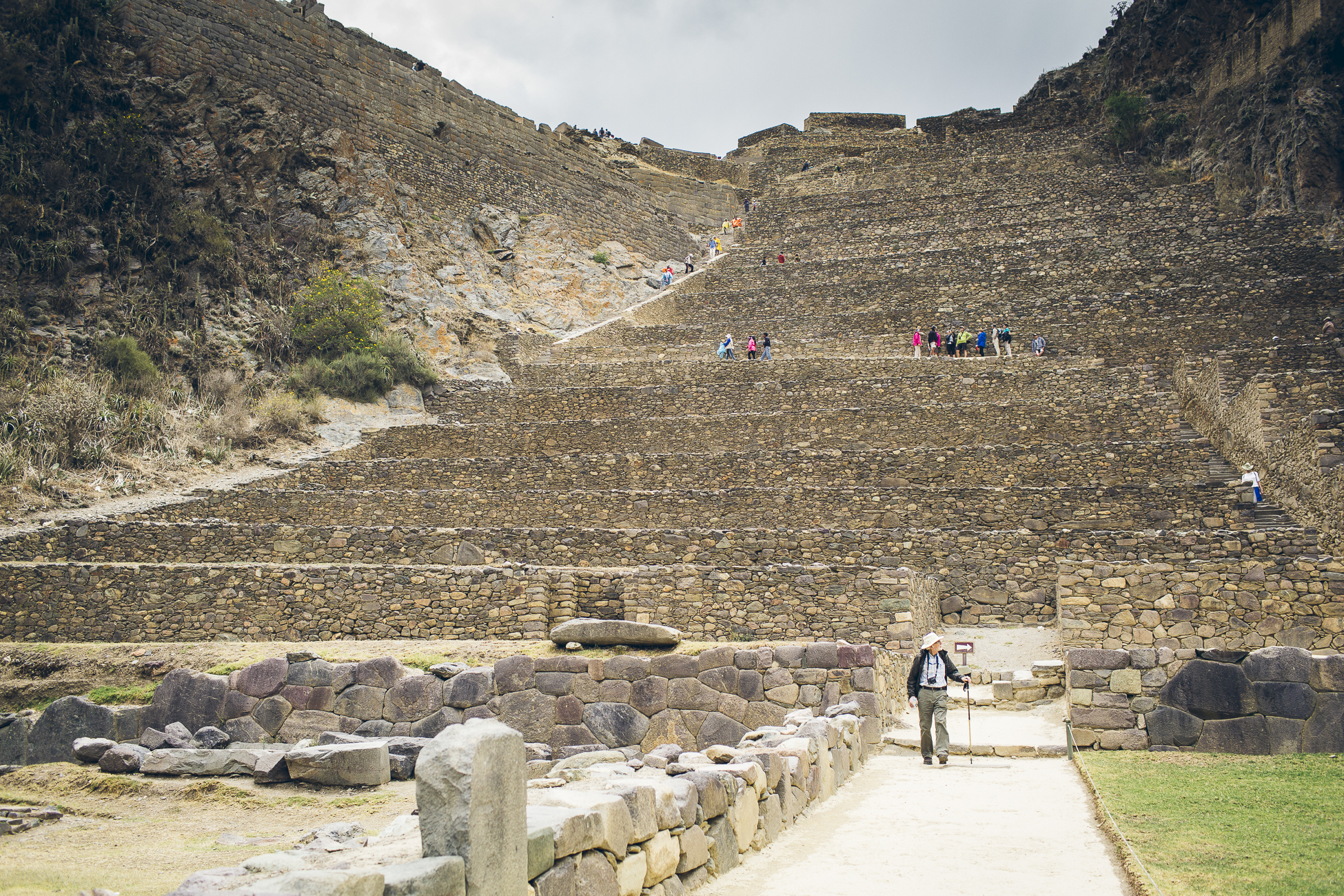 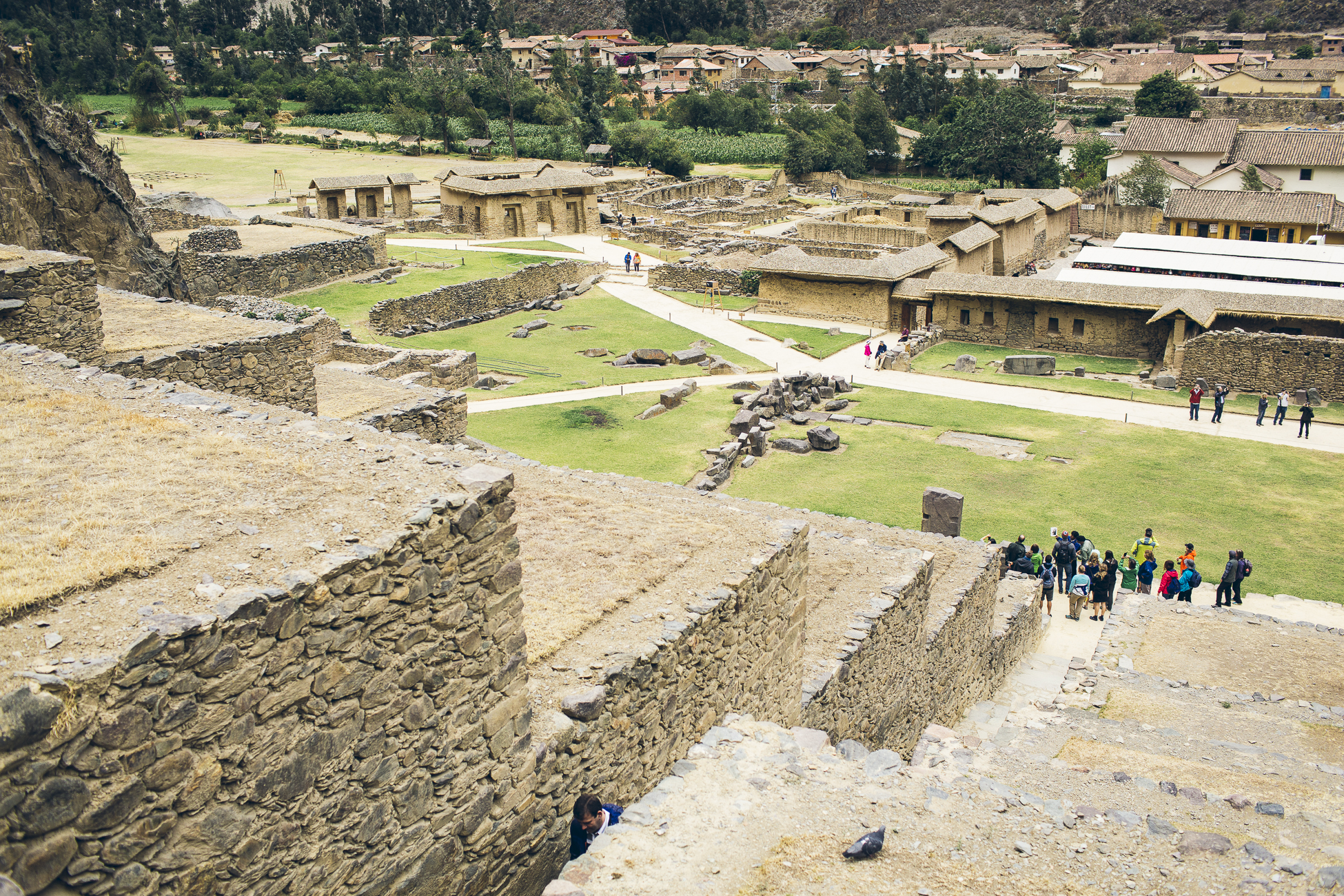 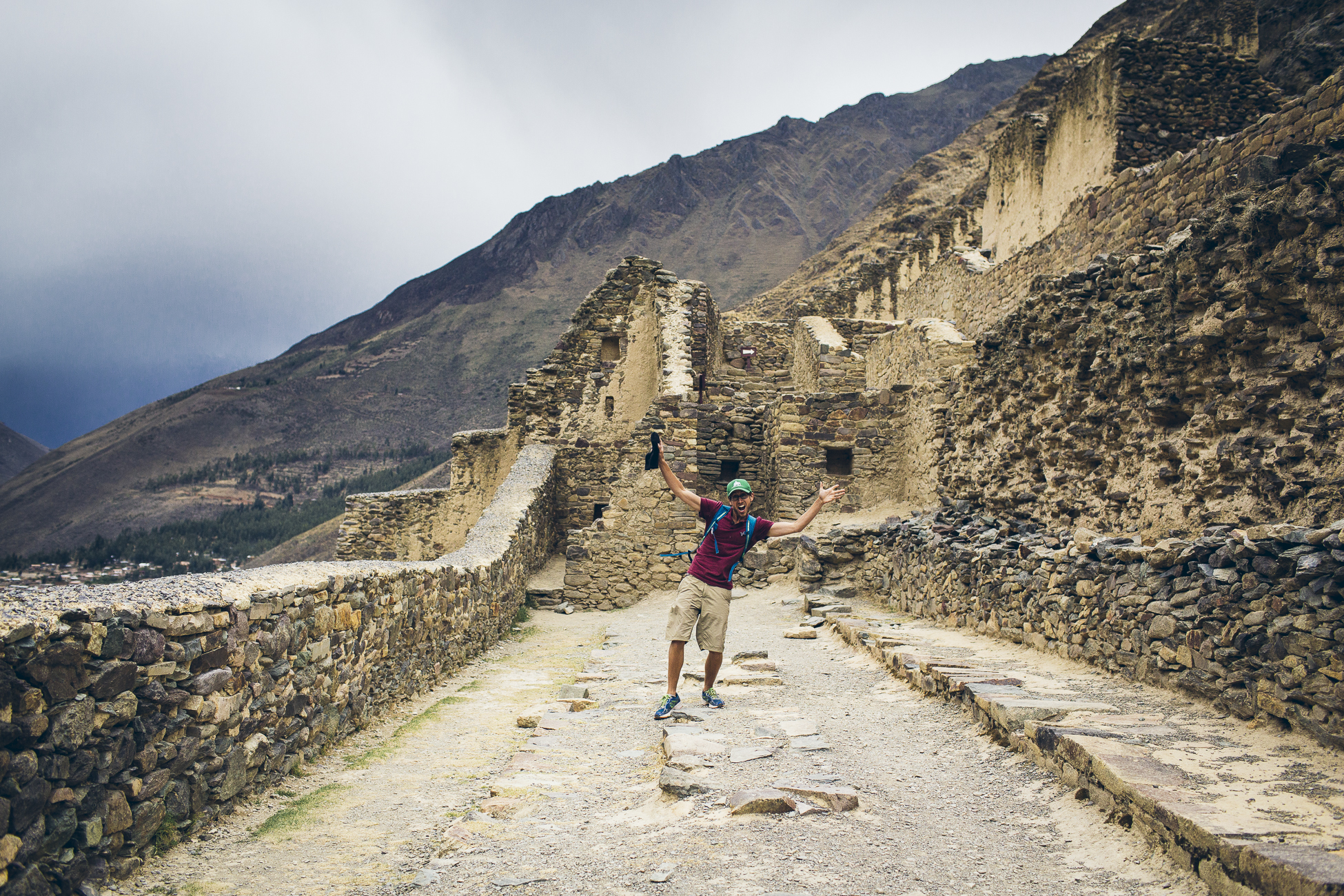 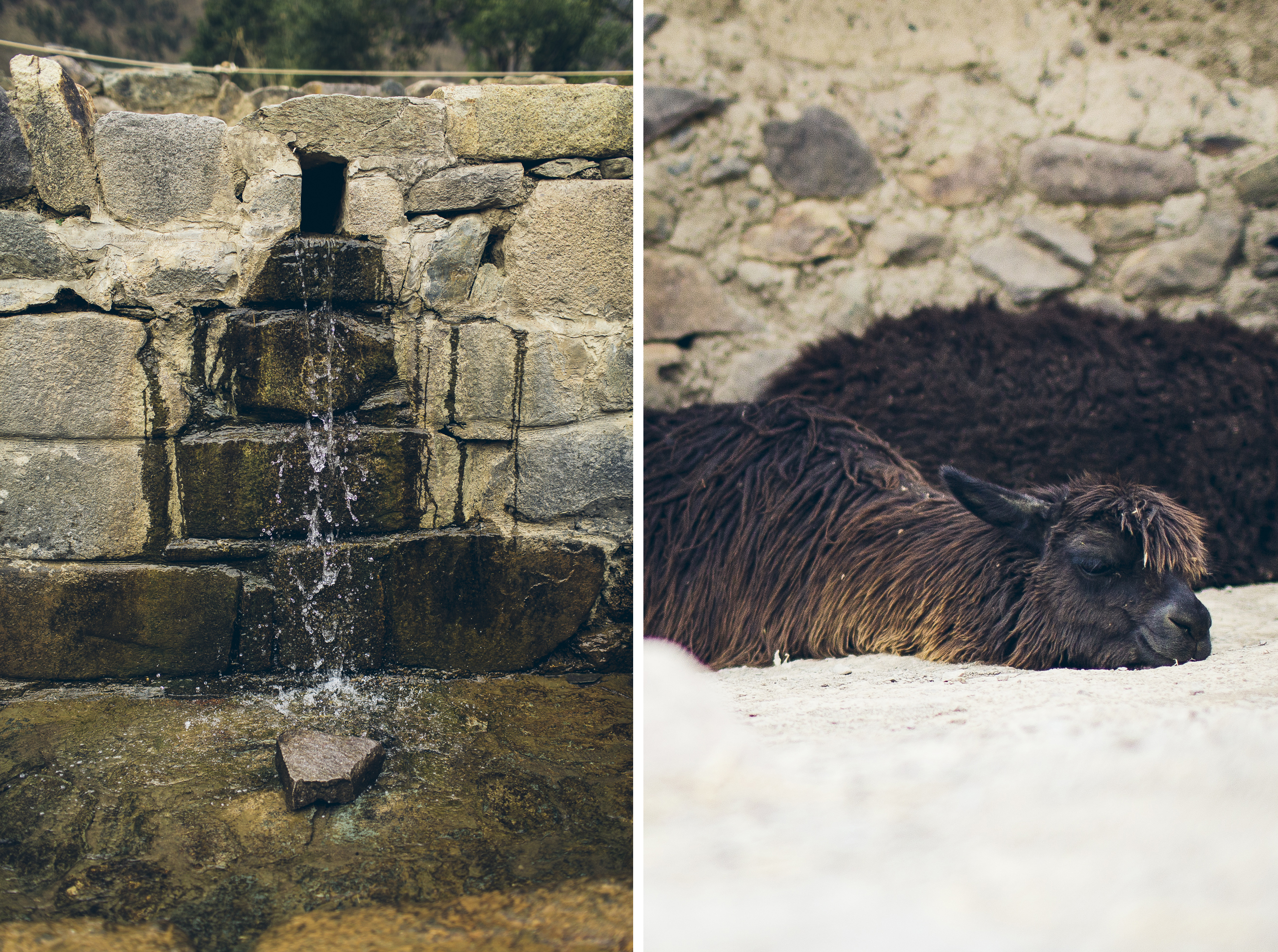 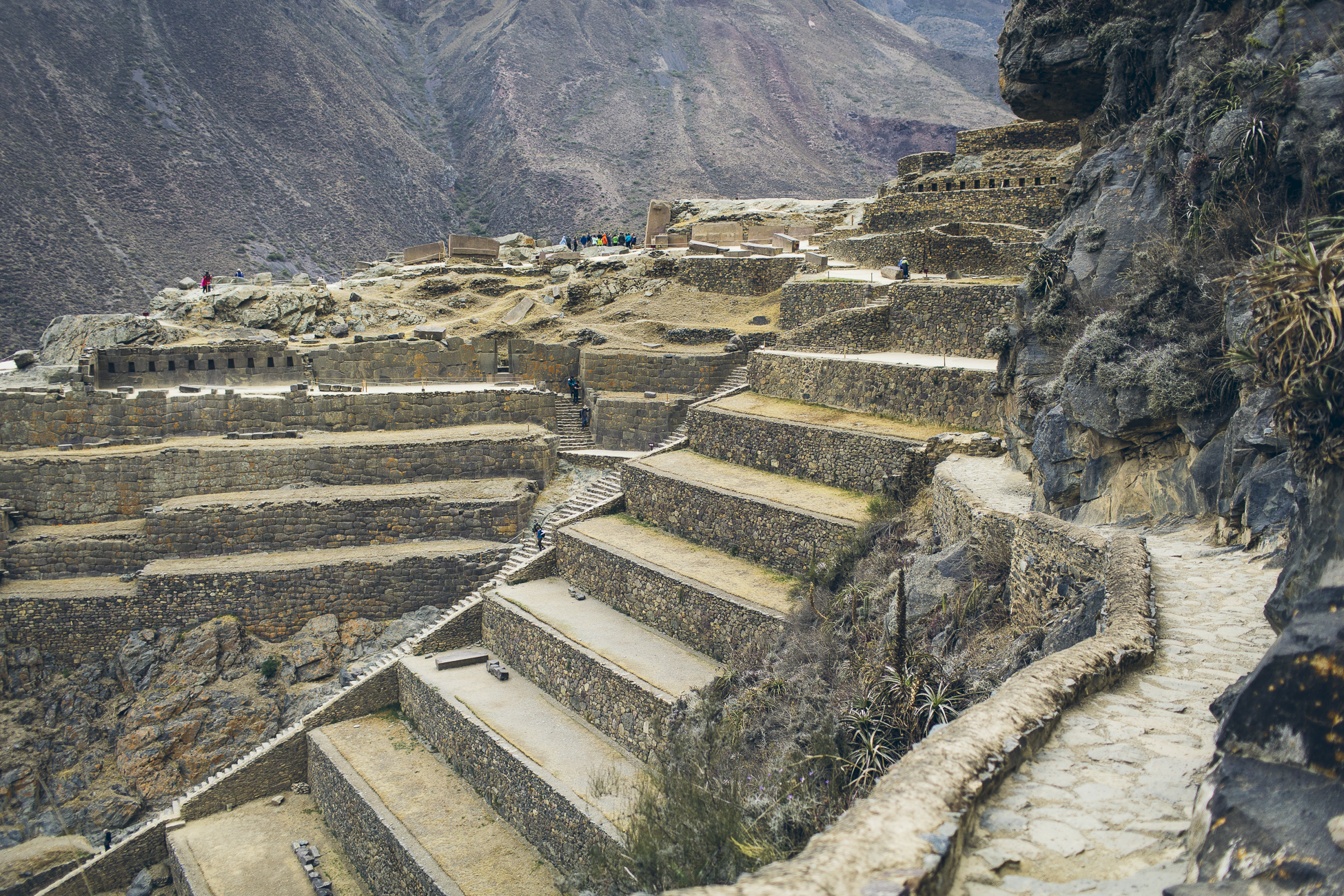 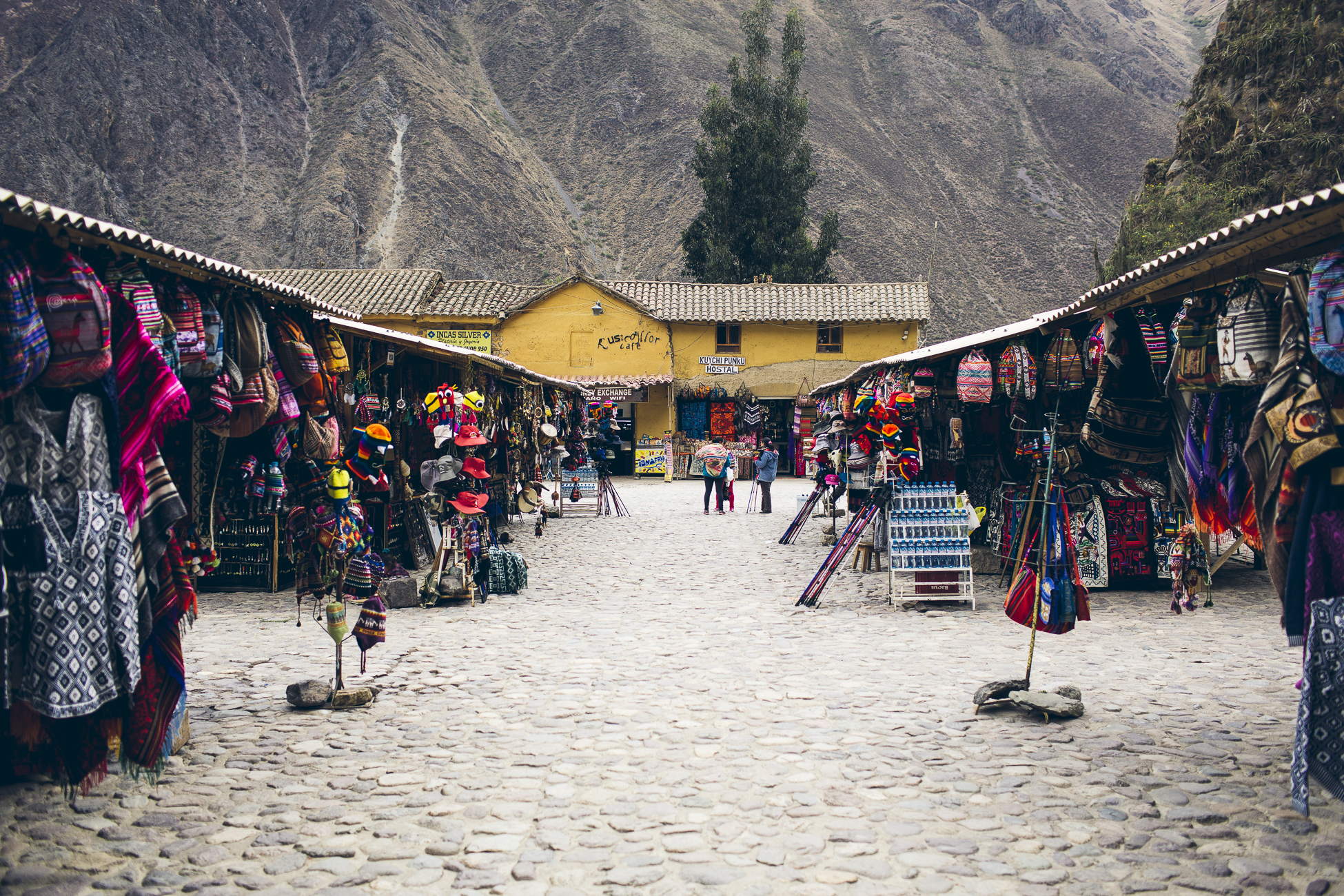 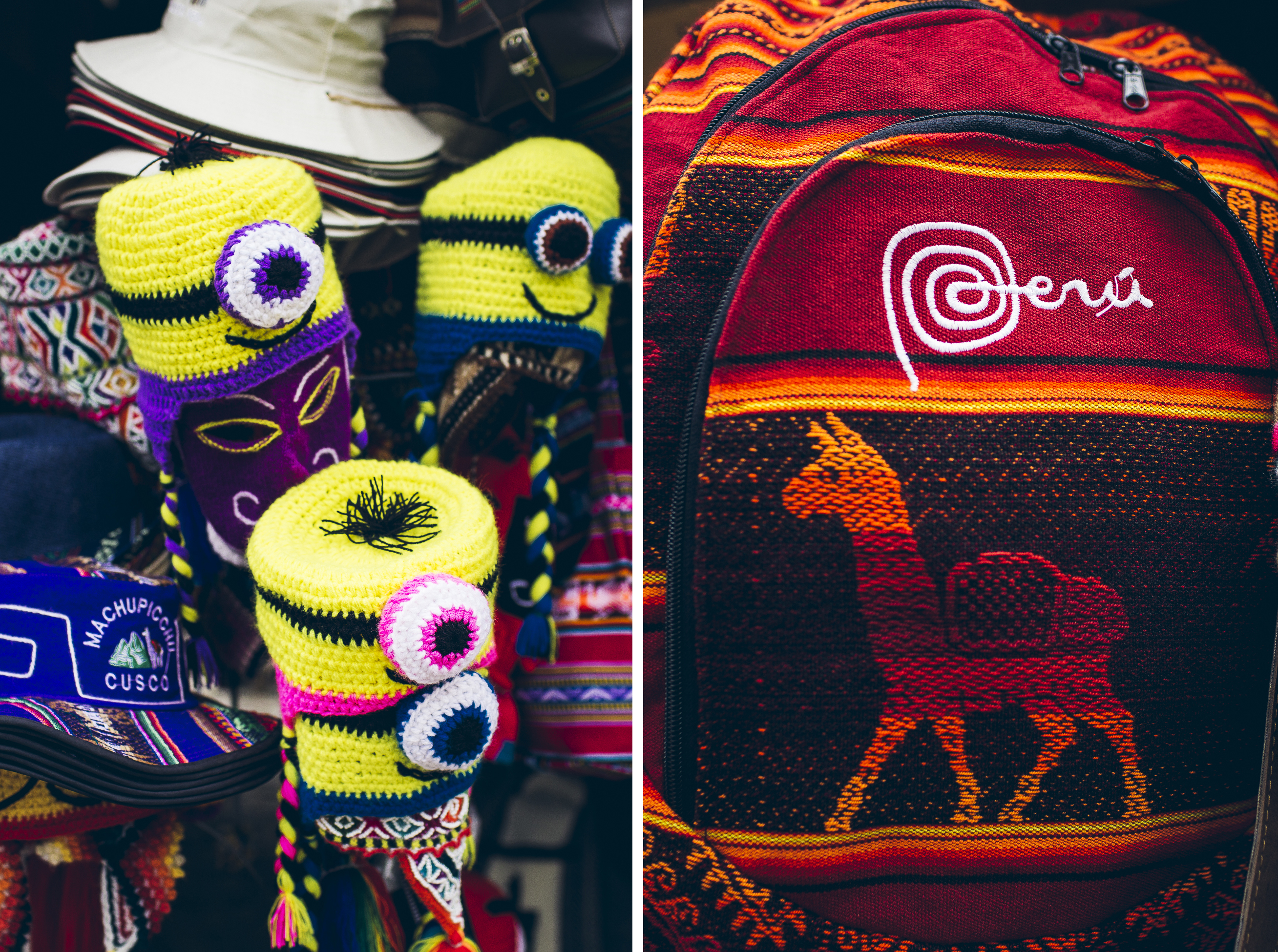 We didn’t quite complete our Boleto Touristico, missing Chinchero due to its location and our lack of time.  Pressing on along the backroads, we headed towards our next destination: Machu Picchu.