As we entered Southern Colombia our next destinations would teach us a bit more about the history of the country, including the archaeological ruins in San Agustin, independence day in Popoyan, and the gothic basilica church of Las Lajas close to the Colombian-Ecuadorian border.

In 1758 Friar Juan de Santa Gertrudis, a Spanish missionary, stumbled across the small village of San Agustin. He was quite disturbed by the giant stone statues he saw hidden among the trees, which he was convinced were created by the devil. Friar Gertrudis was the first person to write about these statues, and it wasn’t until 1913 that a German archaeologist named Konrad Theodor Preuss arrived and conducted the first scientific studies of the statues.

There is little known about the pre-Incan people who created these artifacts as no written records were left behind. Archaeologists have studied the remains (stone statues, artefacts, and tombs dated between AD 100 and 1200) for clues as to their lifestyle and rituals. Over 500 statues have been studied, but archaeologists estimate that they have uncovered only 10% of the statues and ruins. They theorize that additional Mayan-like pyramids and other structures remain buried throughout the area.

The statues depict characters such as animals (eagles, jaguars, frogs), mythical creatures, and gods. Of course it is human tendency to explain the unexplainable (i.e. the statues’ mash-up of human and animal characteristics) as a product of the people’s use of locally grown hallucinogenic mushrooms. Perhaps if we time travelled back to AD100 to 1200 the leader of this ancient civilization would simply explain by means of this song.

Anyway, fast forward to the 1980’s and 1990’s. Looters took to the site and ransacked many of the tombs and statues, with a total of 17 statues known to have been stolen. Some are in a museum in Germany and one was even found in a basement in France. Eventually the area was declared a UNESCO World Heritage Site in 1995 and security has tightened up and looting has diminished. Today we can stroll through the lush green park and admire the statues and tombs, as well as visit the museum and learn what little there is to know about this interesting ancient civilization. 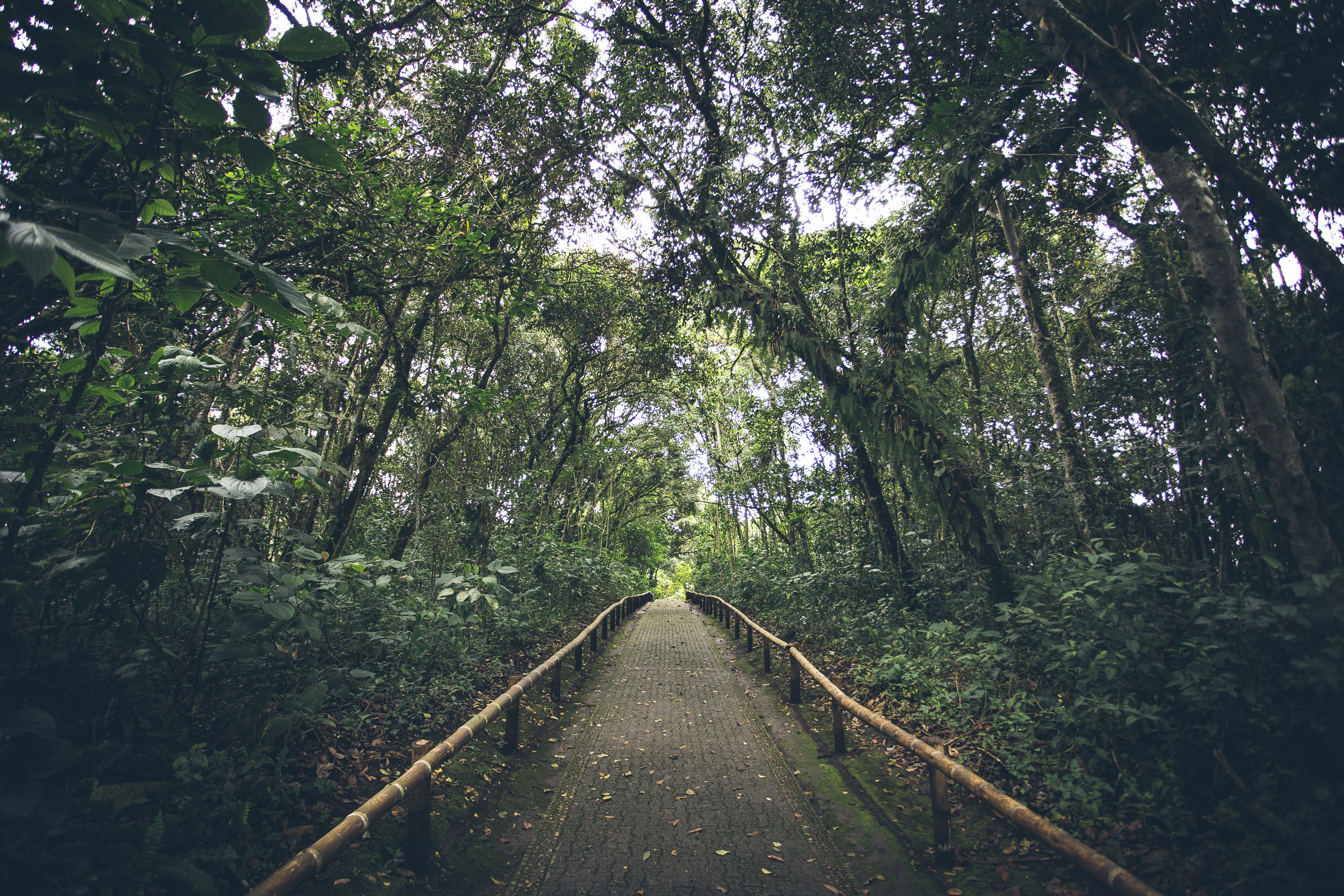 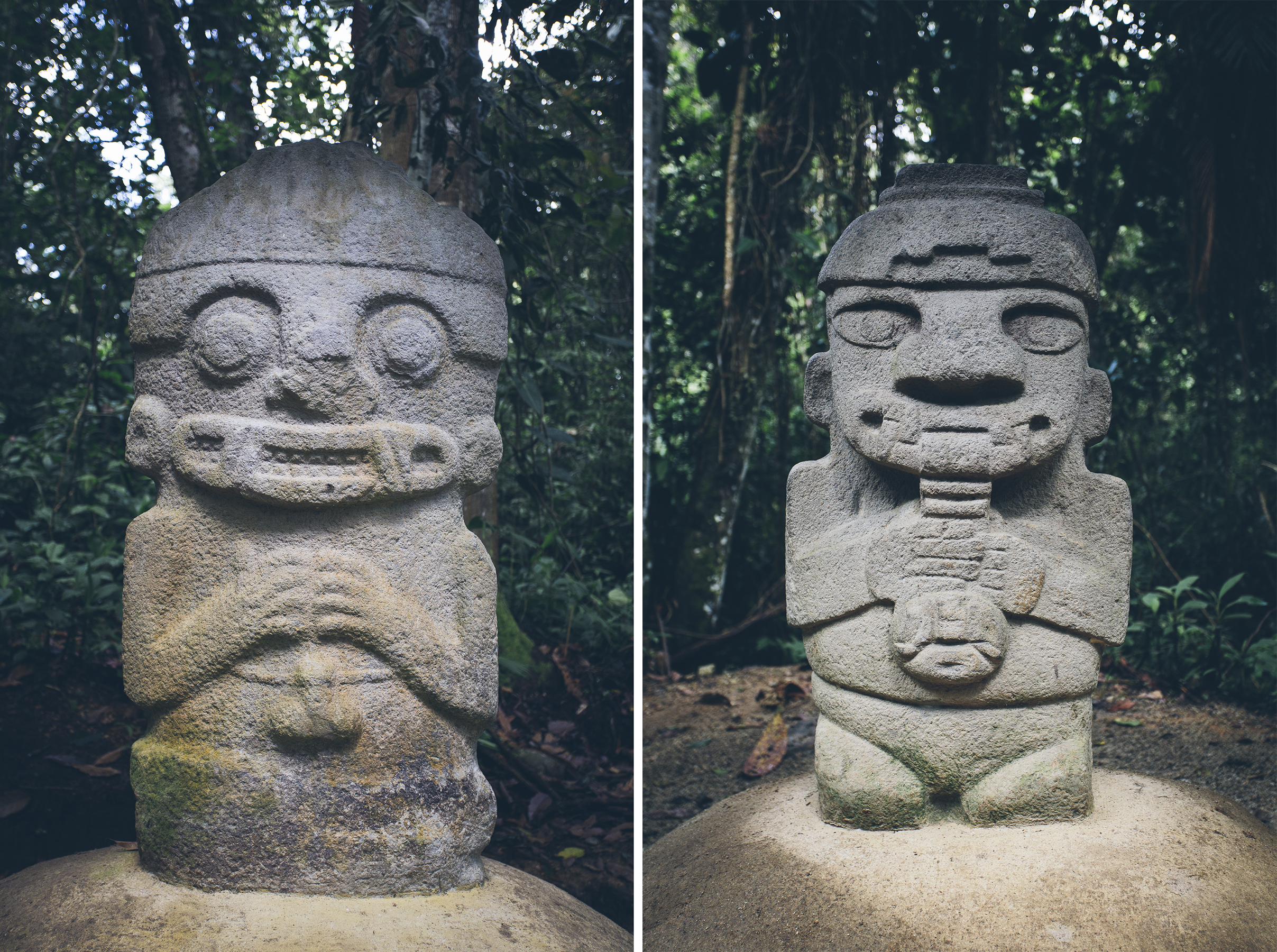 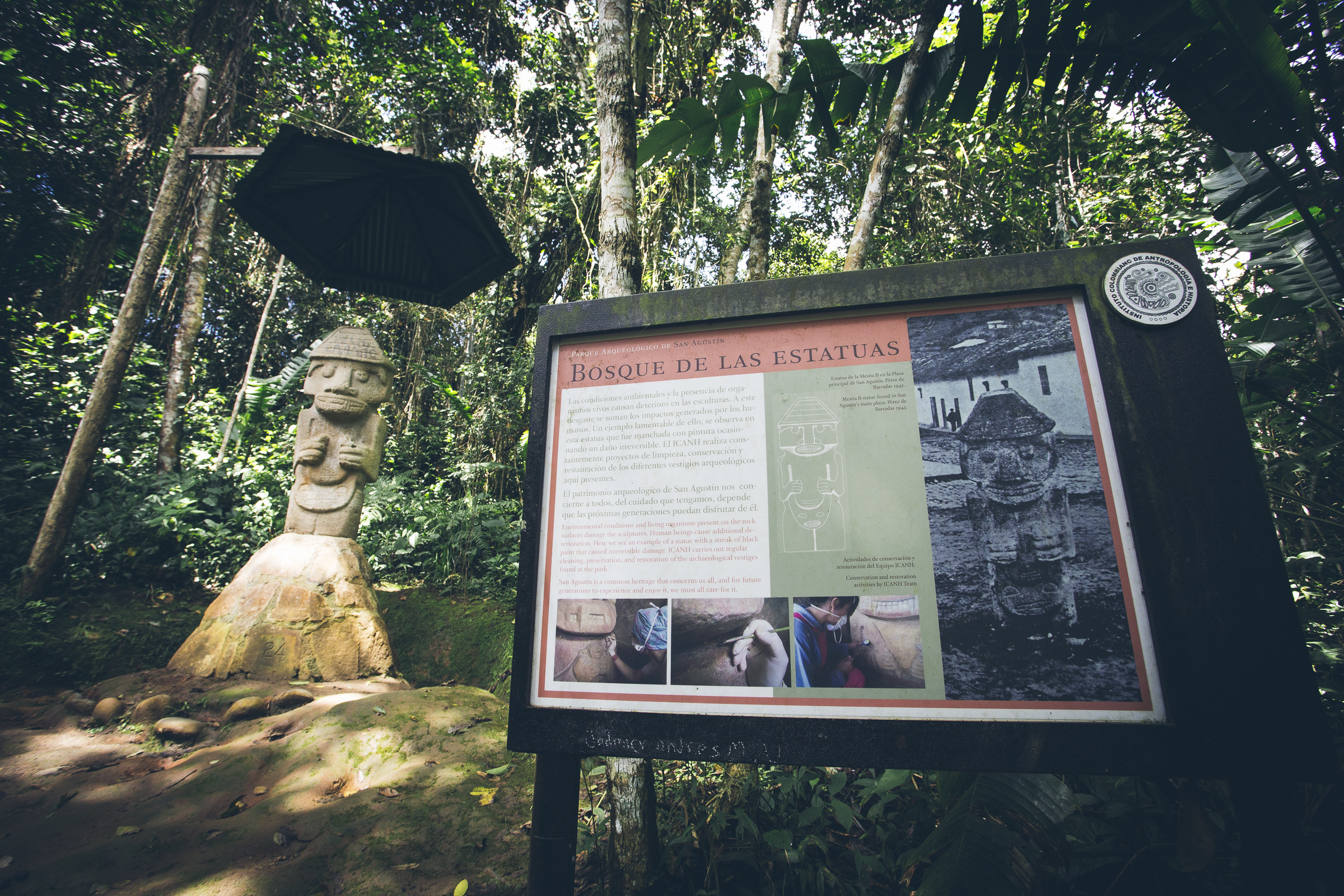 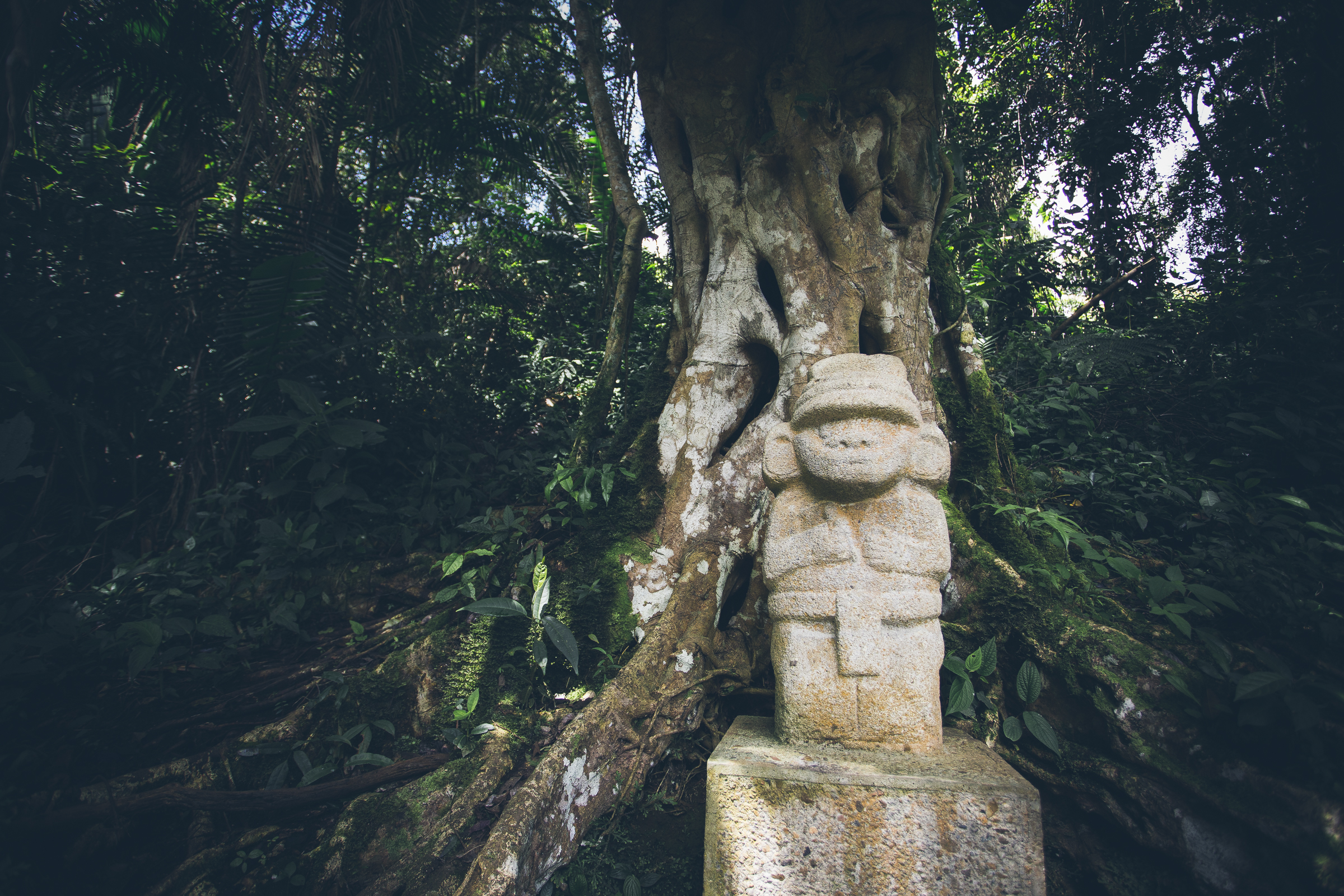 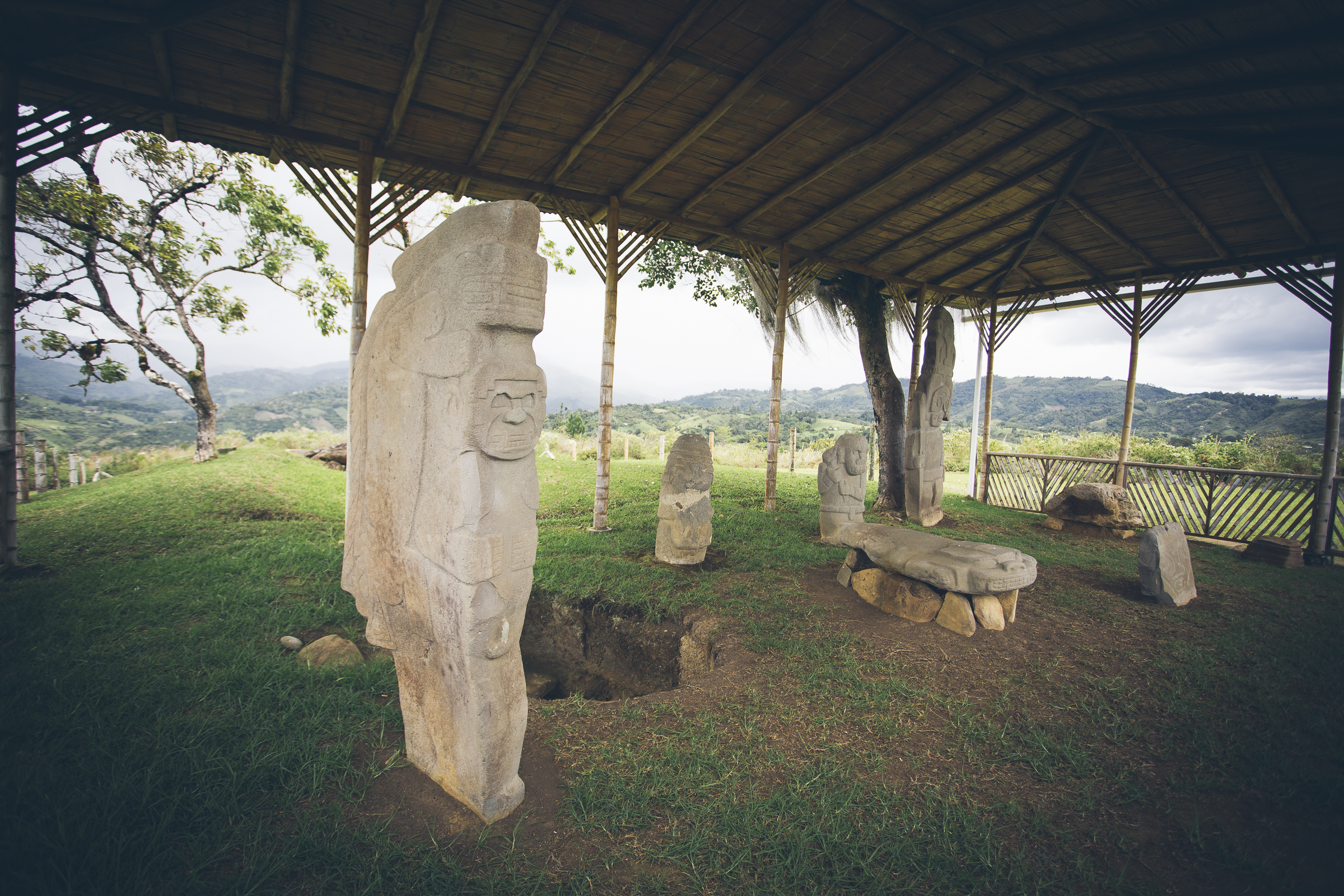 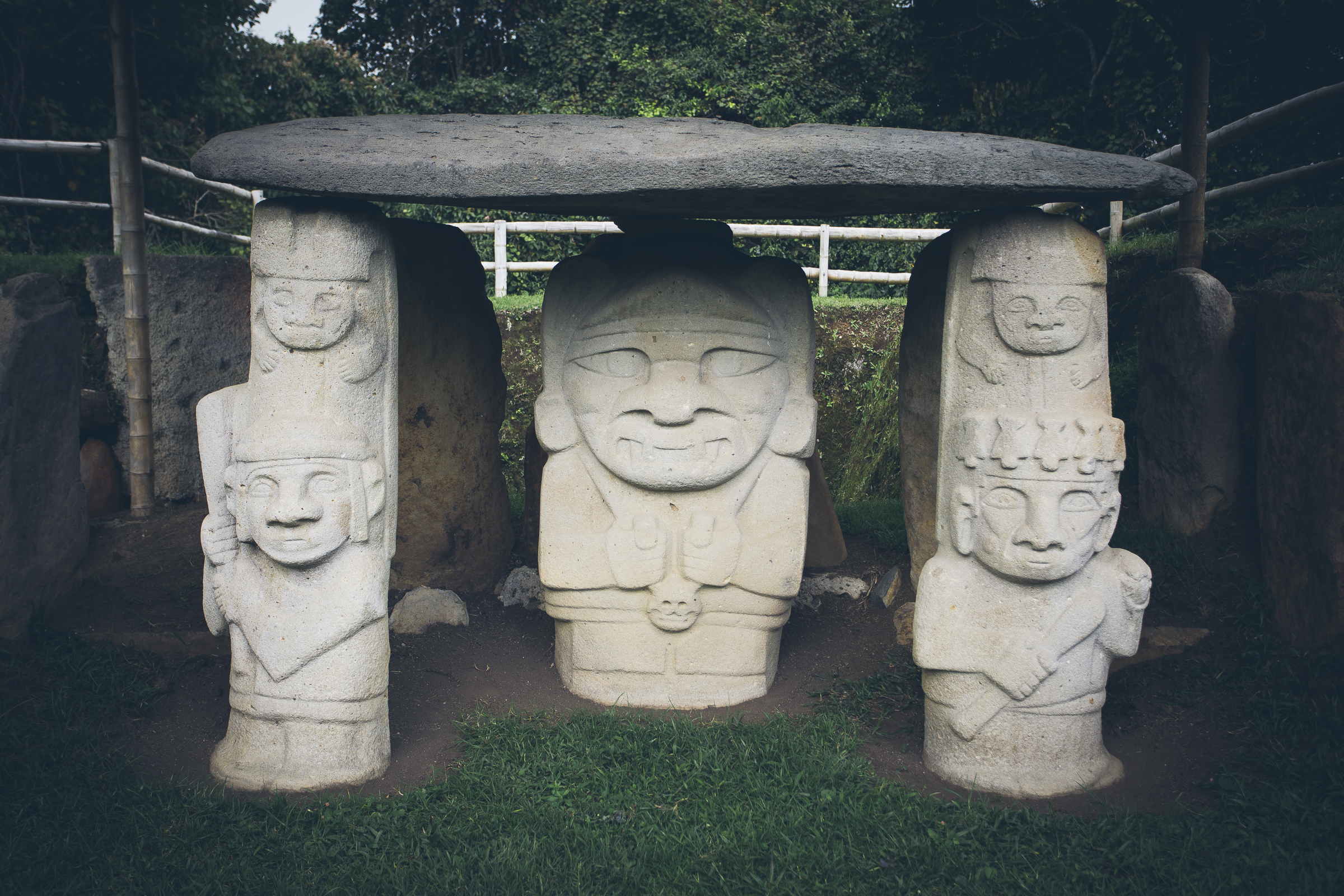 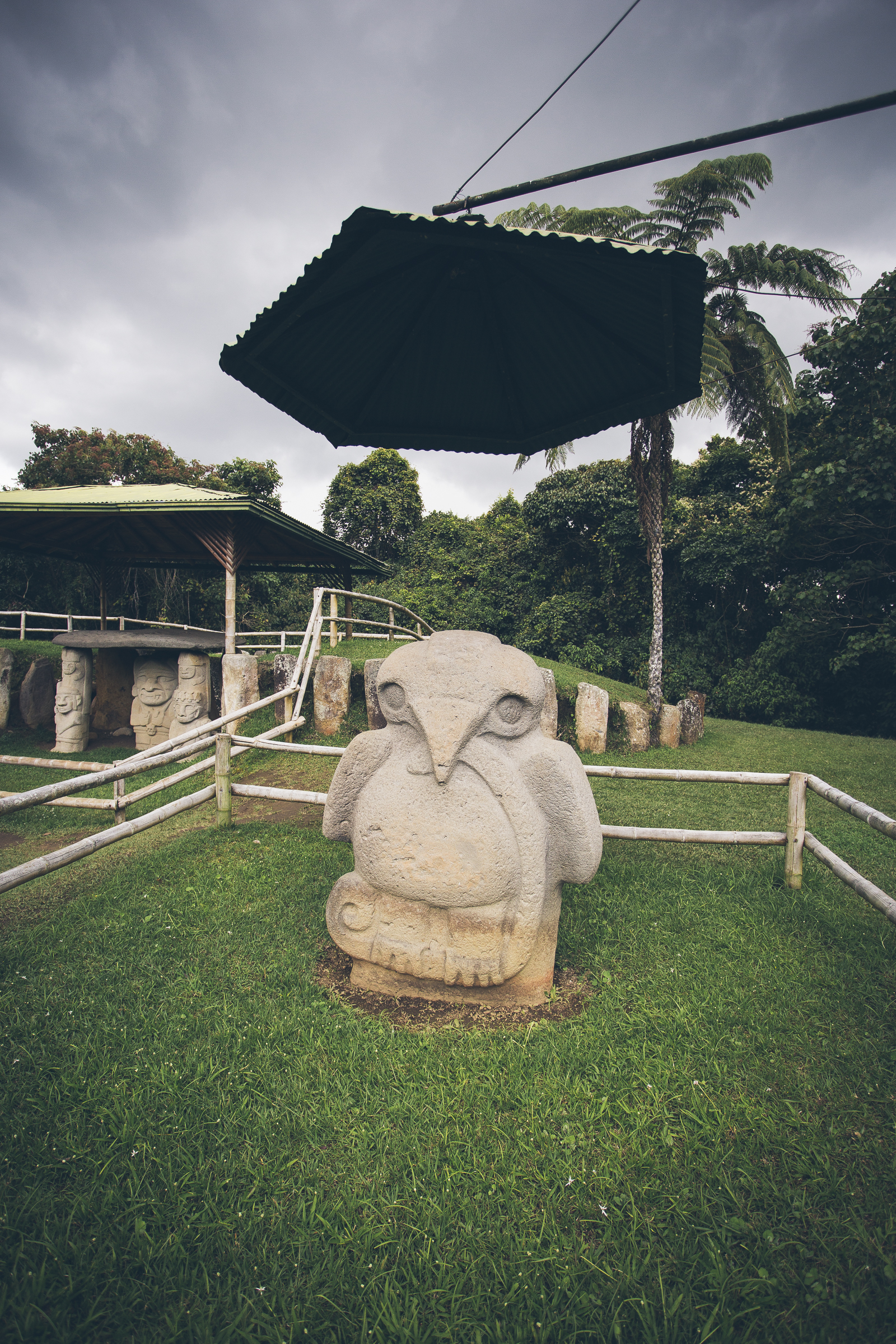 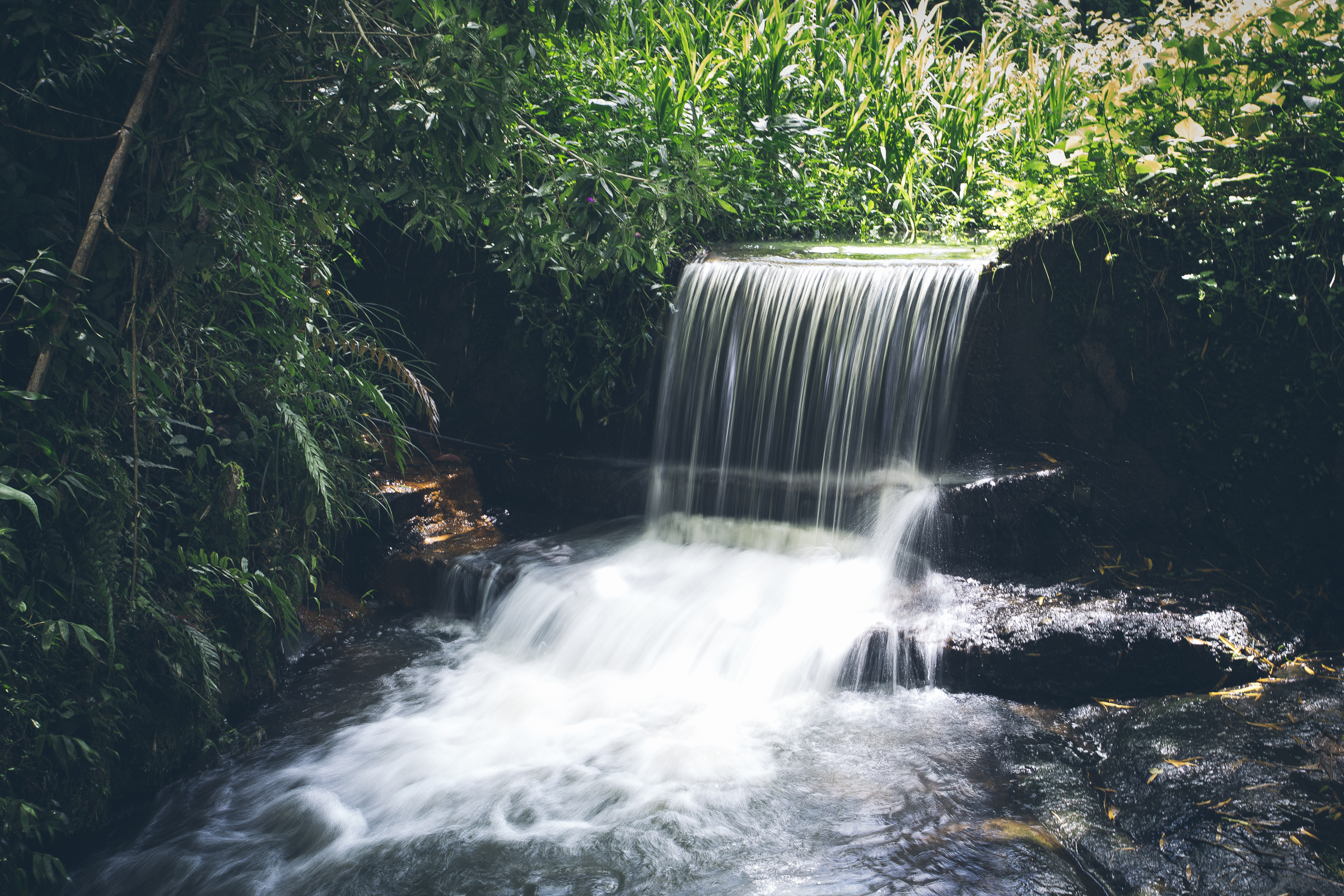 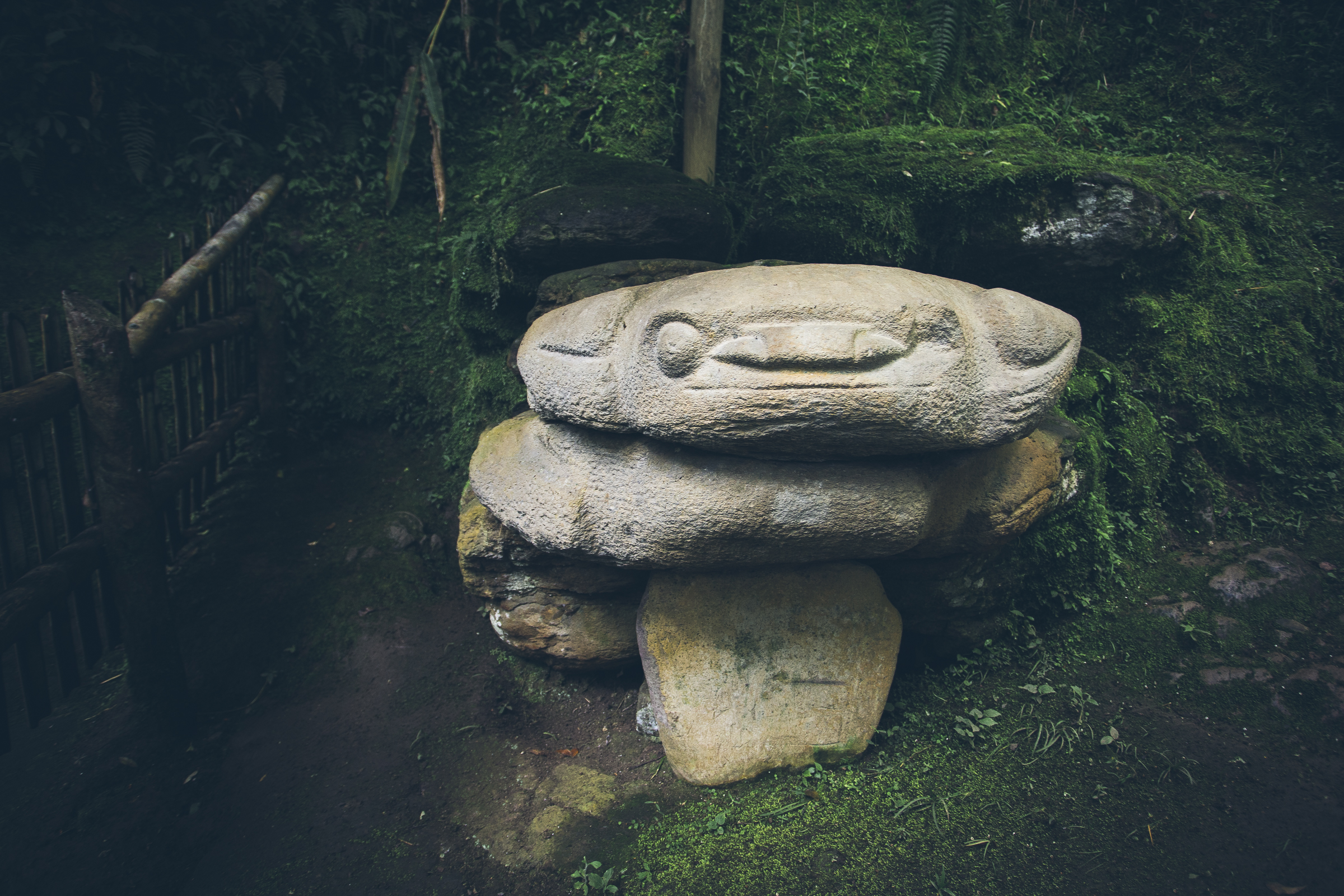 The journey to our next destination took us along a road which alternated between dirt and paved sections with extremely boring scenery for the first half, followed by stunning countryside descending to the White City of Popoyan. Most of the buildings in the historic centre are painted white, hence the name The White City. We parked the truck, settled into our hostel, tried to catch up on blog posts, and finally tasted our first Juan Valdez coffee (a Colombian coffee chain owned by Starbucks). 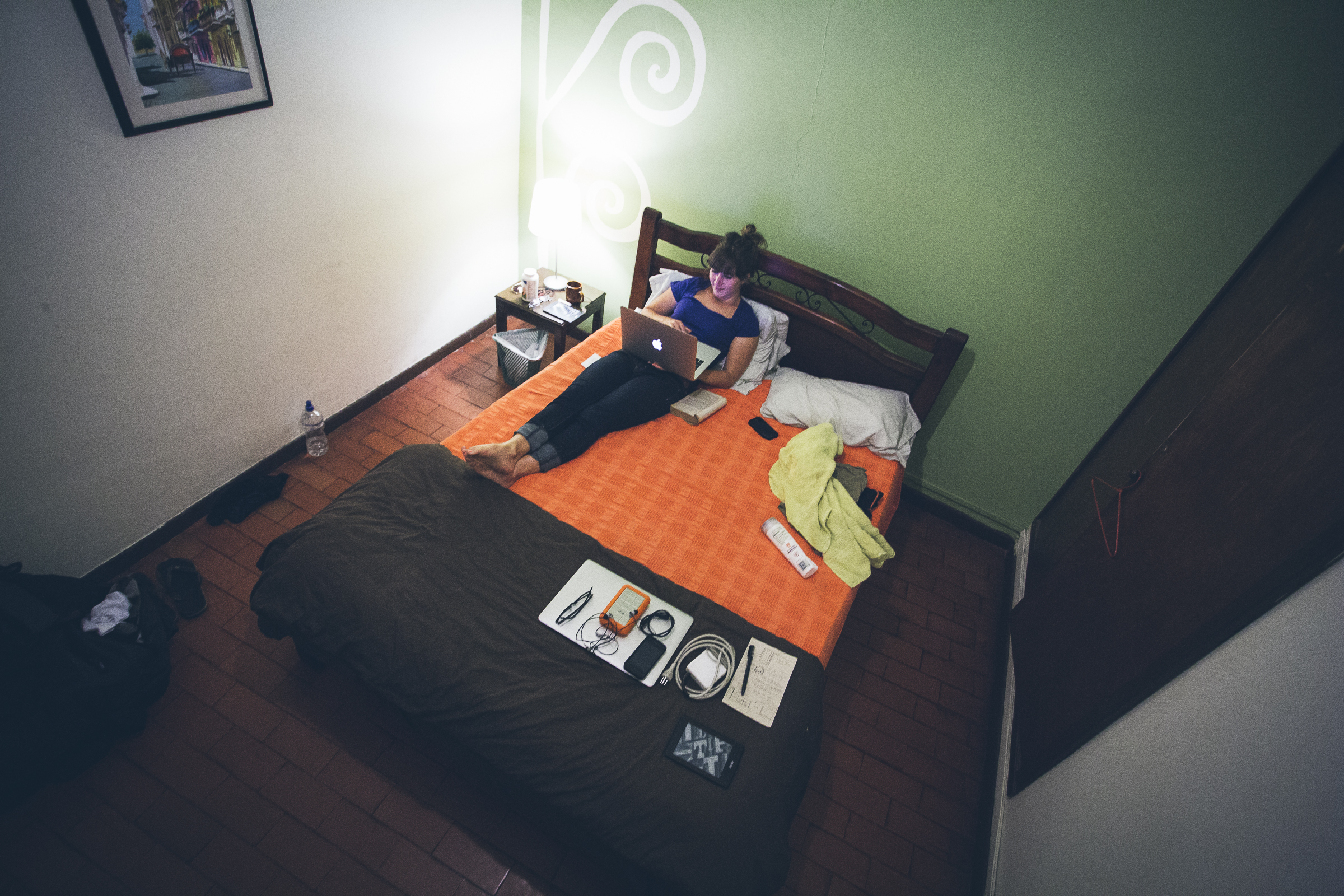 We arrived in Popoyan just in time for Colombia’s Independence Day on July 20. As such, not much was open until the day we left. This caused a bit of frustration in terms of eating and dining, but we embraced it and directed our attention to the people-filled central square, police presence complete with huge Colombian flags, and parade procession. 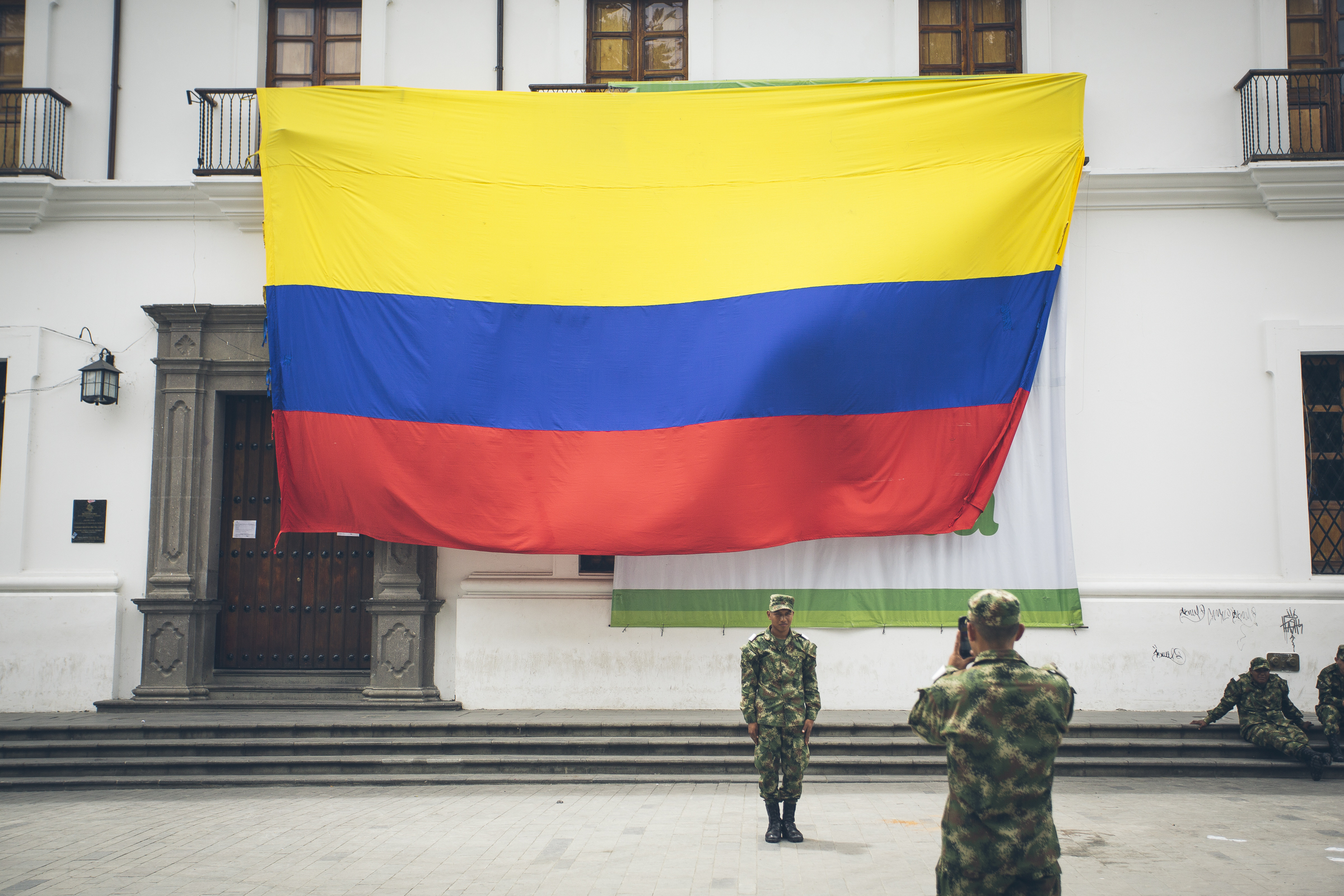 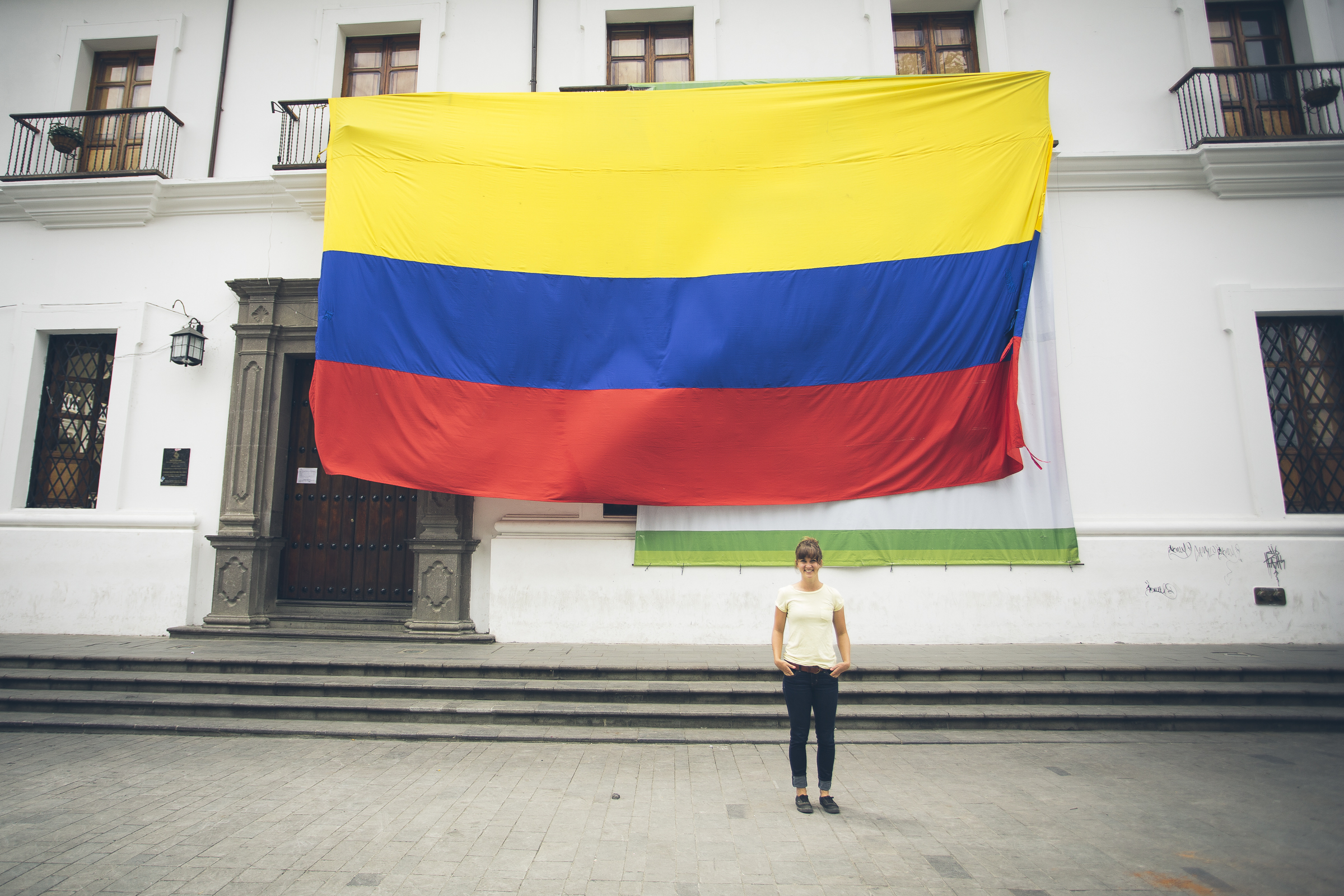 And now…. a brief history lesson on the independence of Colombia.  In 1810 the people of Colombia were unimpressed with the Spanish rule. Rebel movements had recently started in nearby Ecuador, Venezuela, and the city of Cartagena.   On July 20, 1810 Colombian patriots made a plan to incite a riot in Bogota. Basically they ran through the streets accusing two Spanish guys (one was The Viceroy) of acting like jerks to another patriot sympathizer. The people took the opportunity to come together and approach the Viceroy in mob format, and he subsequently signed an act that permitted a local ruling council and eventually independence.

July 20, 1810 was actually the first step on Colombia’s long path to independence. It wasn’t until the 1819 that Simon Bolivar and his army won Battle of Boyaca in Bogota, securing Colombia’s independence. But wow, Simon Bolivar’s army started in Venezuela and WALKED across flooded plains, rivers, and the frigid Andes to Bogota. Many of his soldiers died of exposure and altitude sickness, were forced to eat raw meat as there was no wood in the highlands, and many arrived half-naked and barefoot in a village nearby to Bogota. You can’t help but immensely admire Simon Bolivar and his soldiers for what they sacrificed for their nation’s freedom. It really makes you think about your own freedom, and what you would do to attain it. It is kind of pathetic to think that (according to the last poll) 50% of Canadian citizens can’t be bothered to walk a block or two to exercise their right to vote in a municipal or federal election! 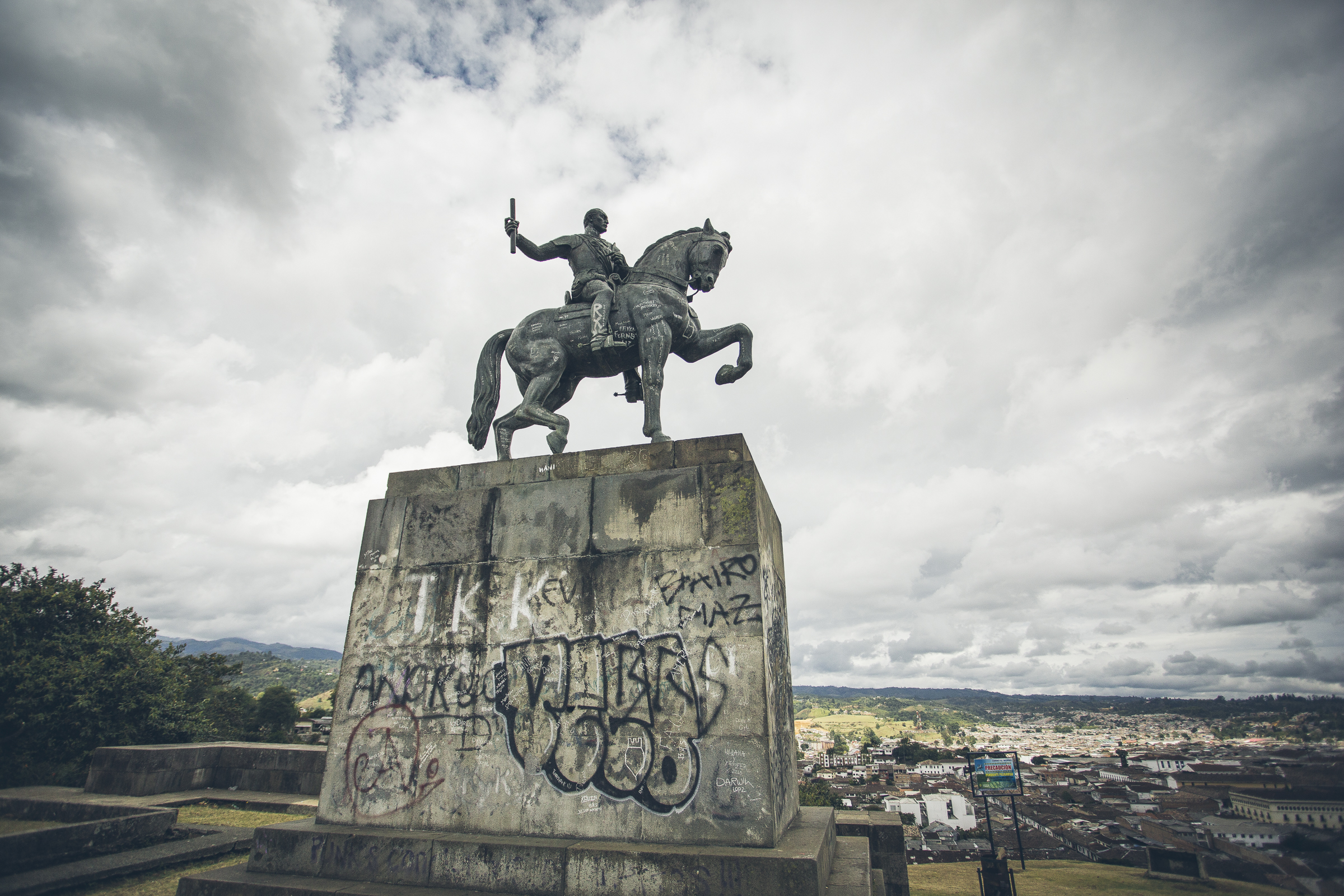 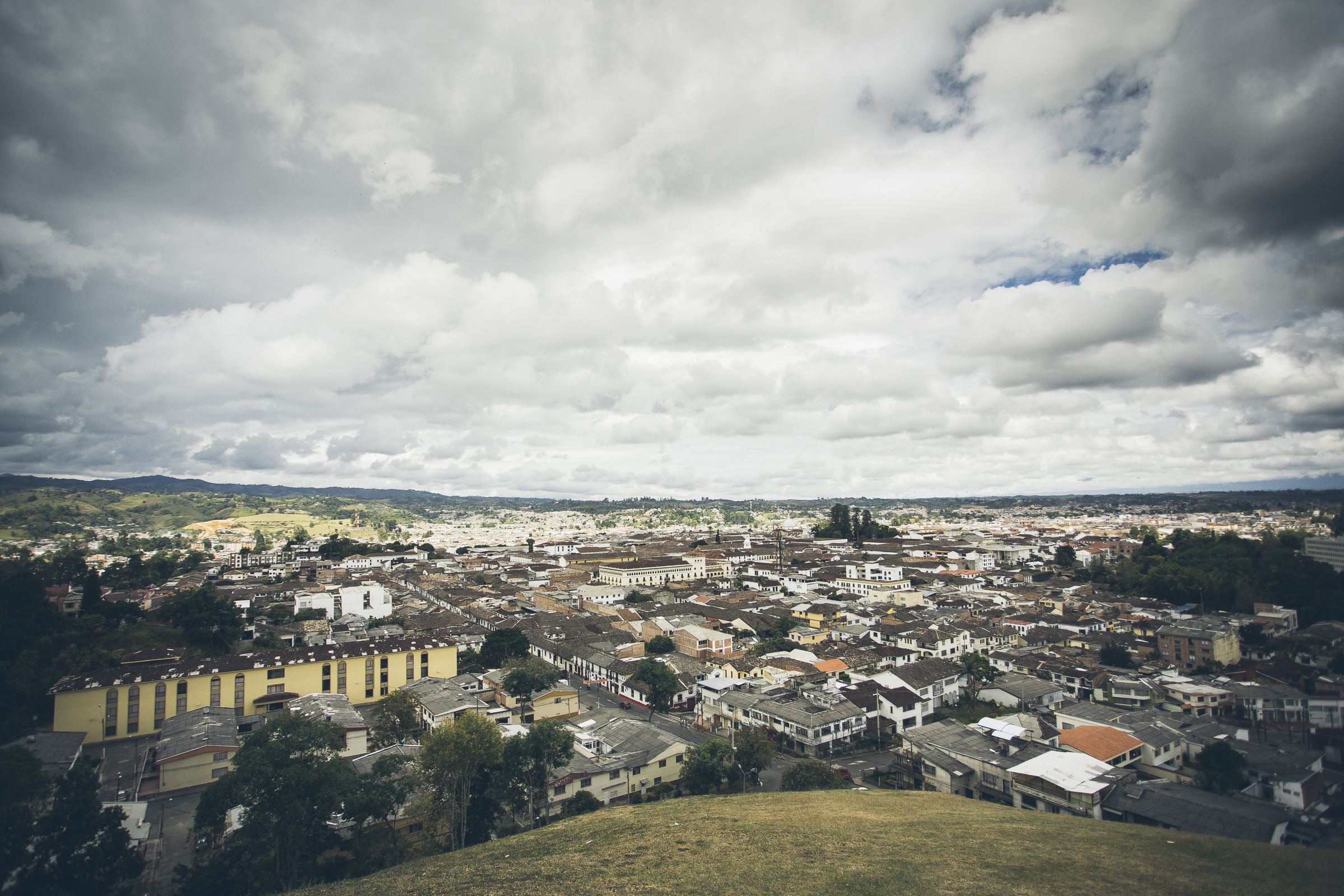 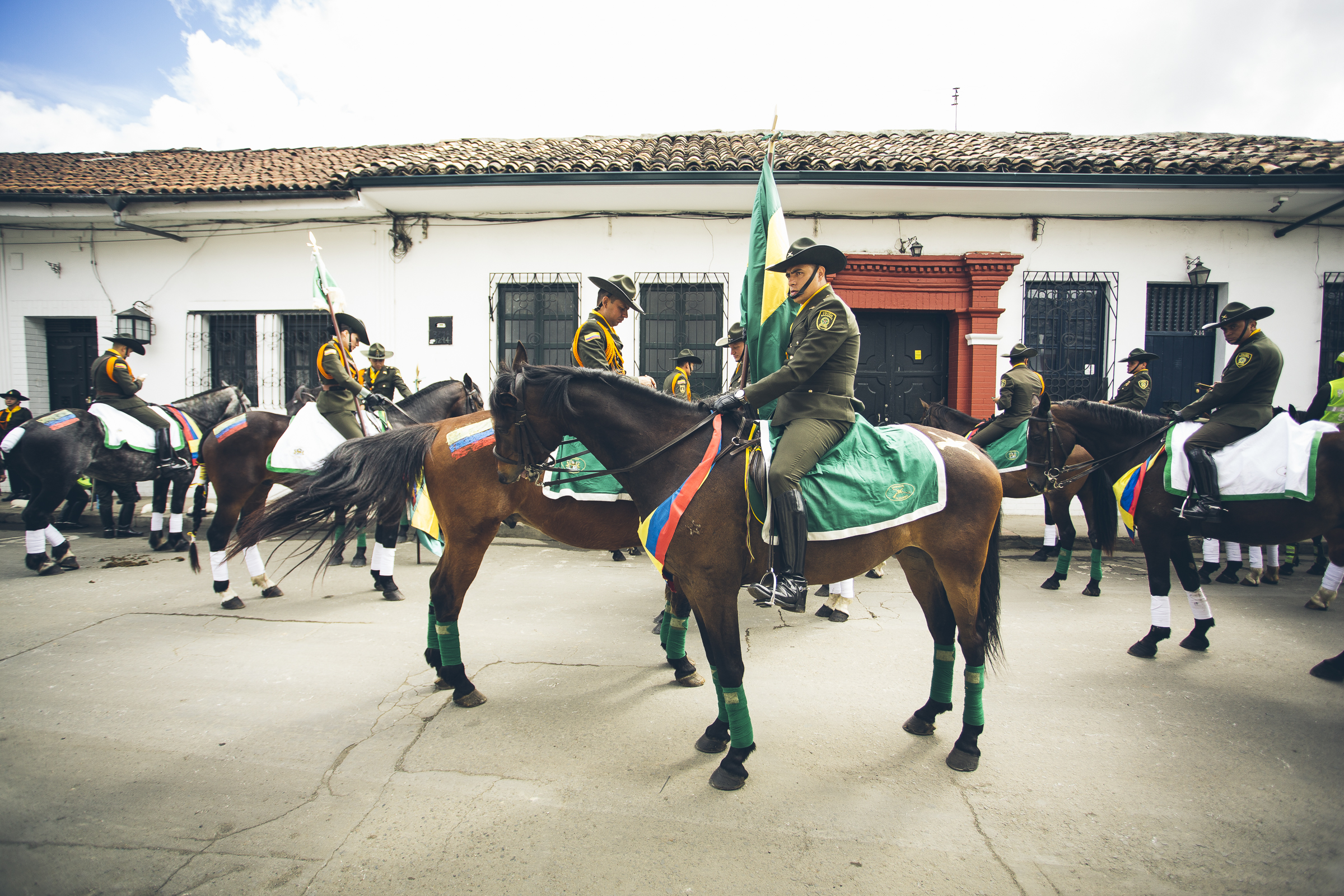 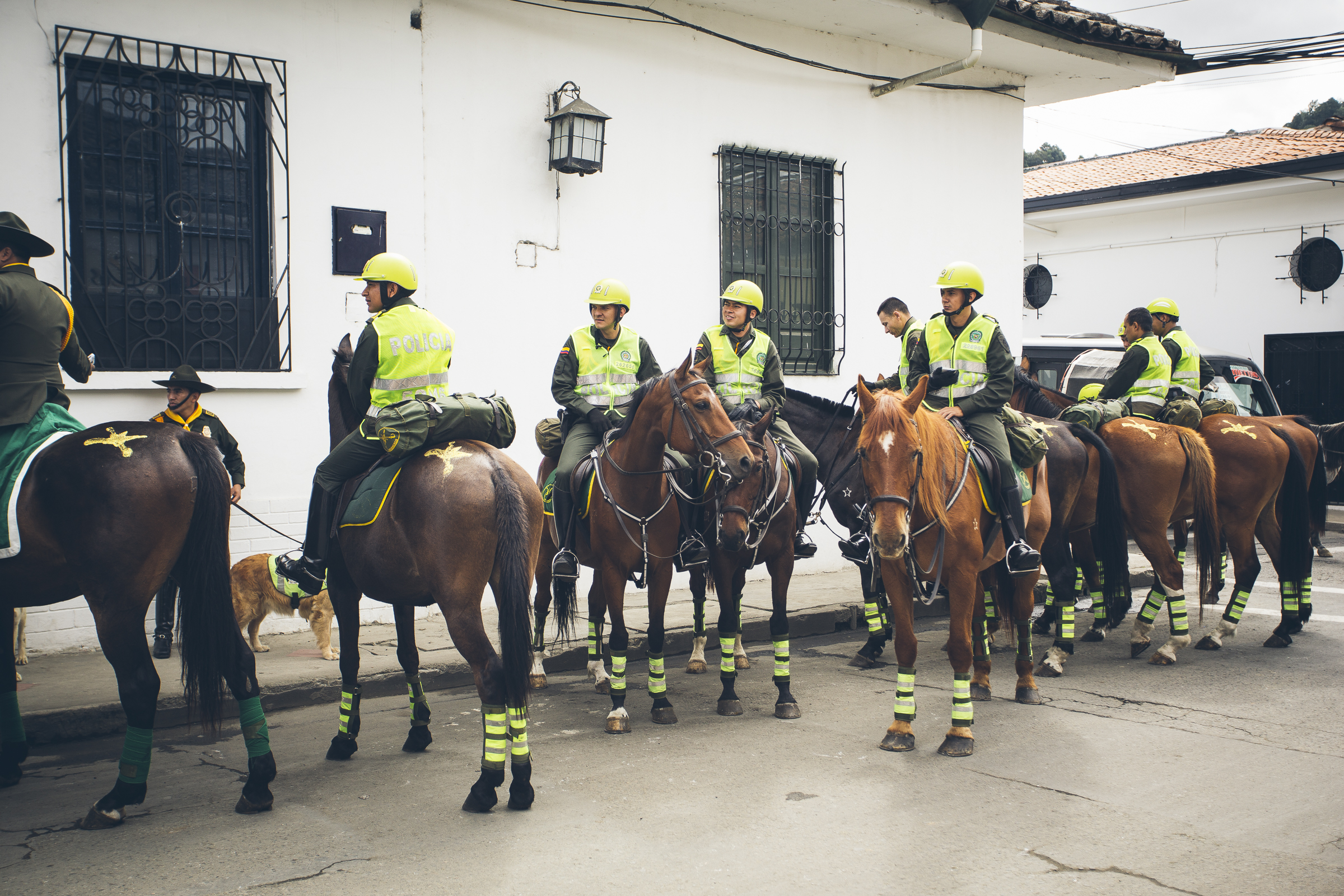 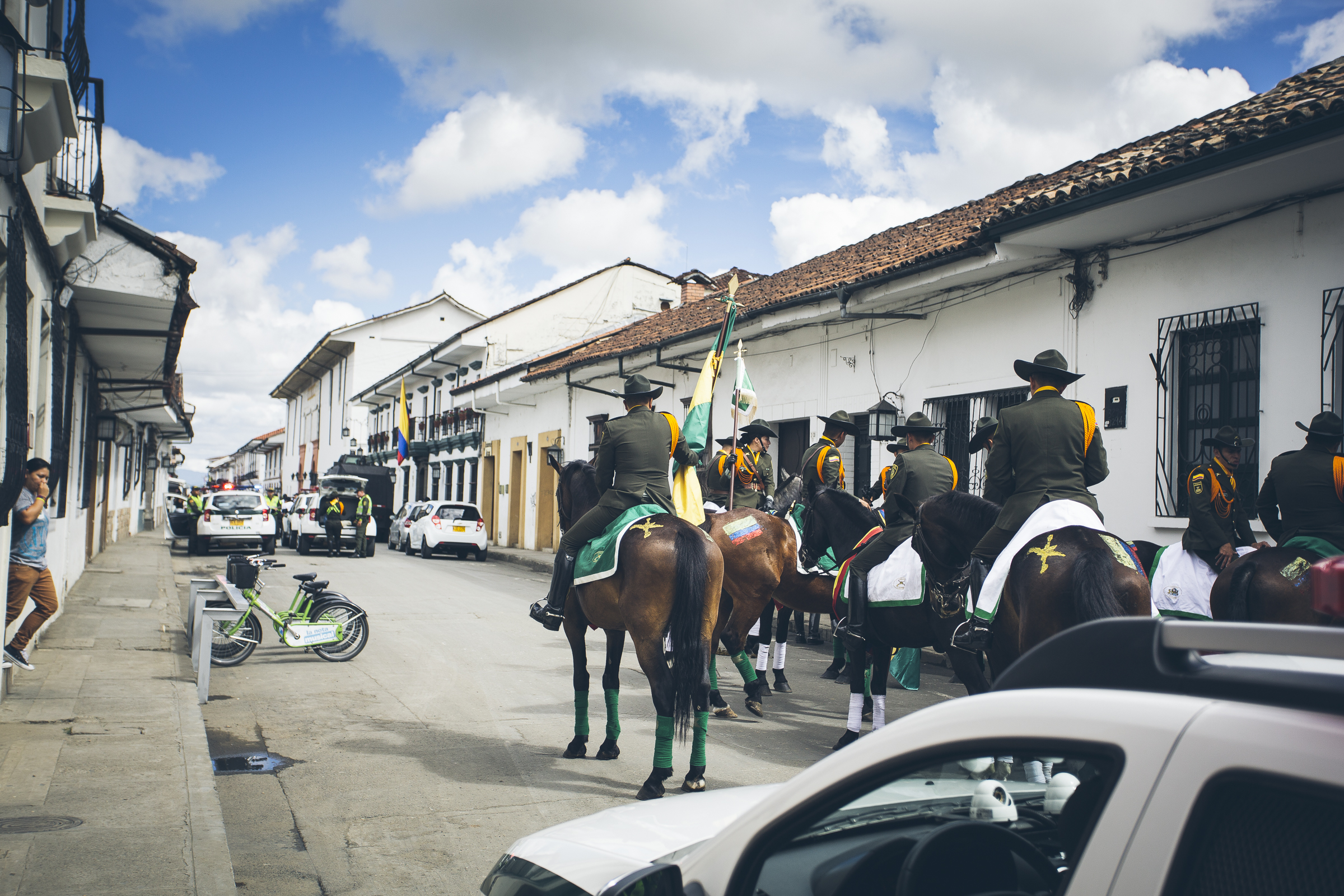 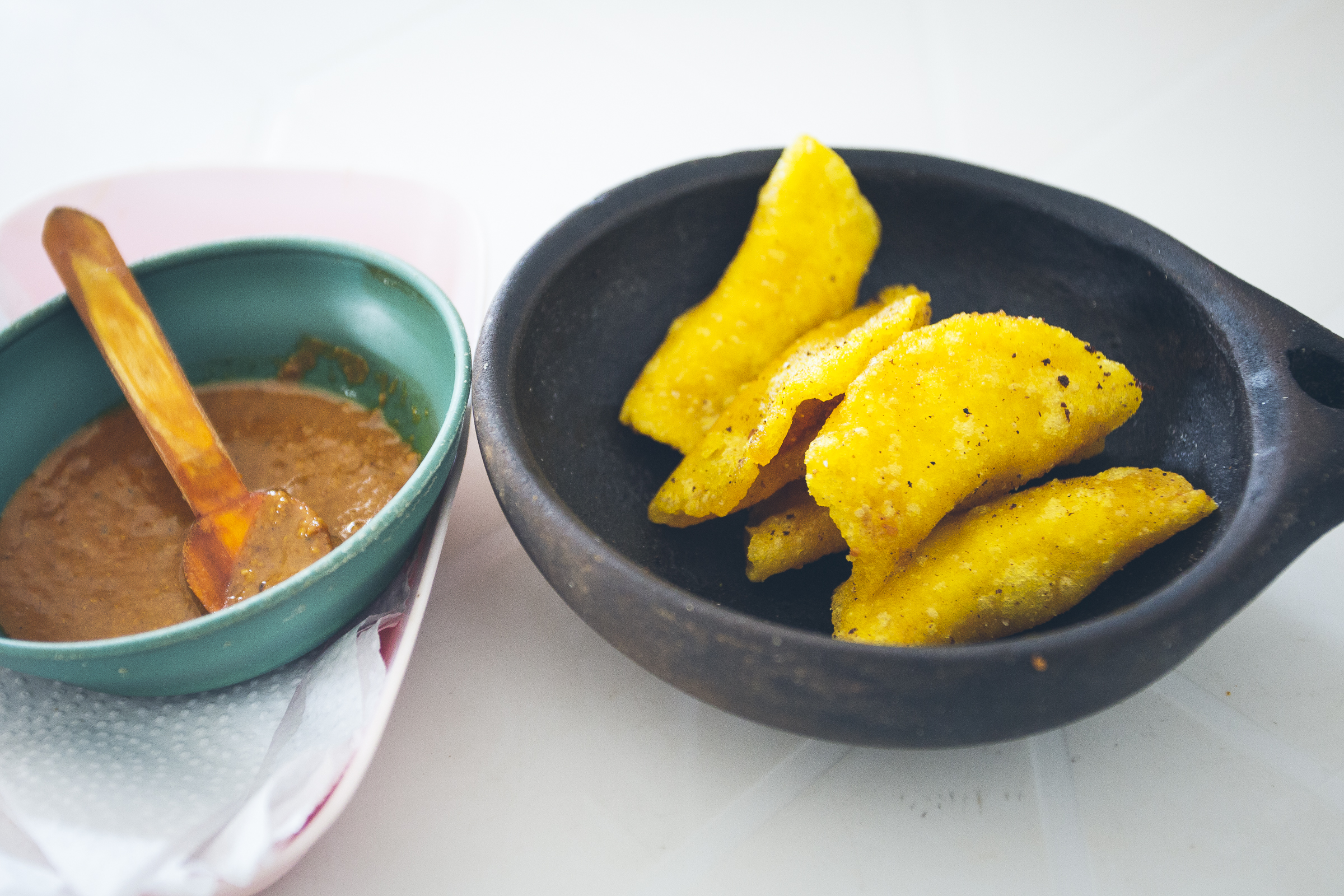 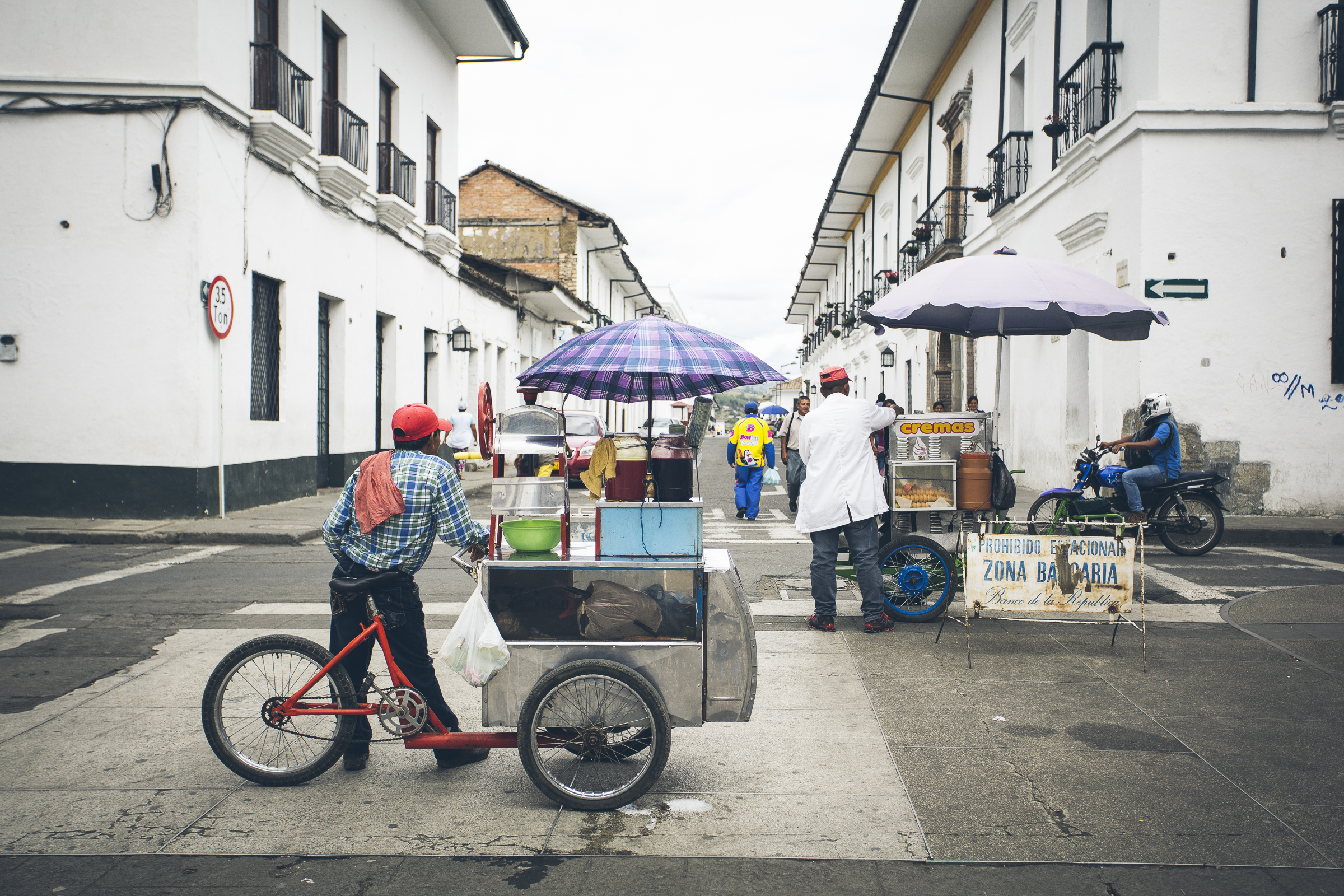 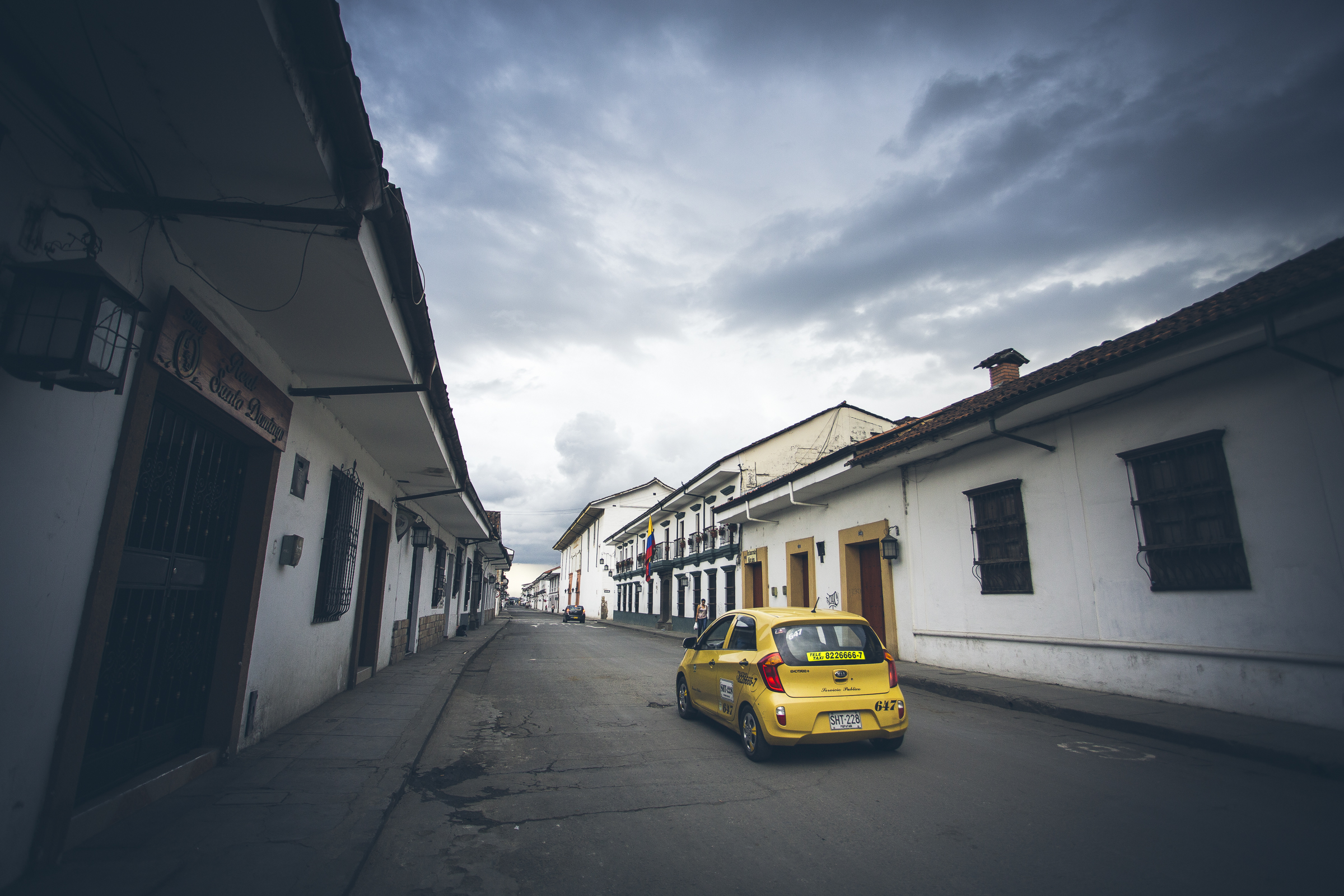 Our last camping spot in Colombia was the parking lot of Chimayoy National Park, where we aired out our dirty laundry and completed  a quick oil change.  #reality 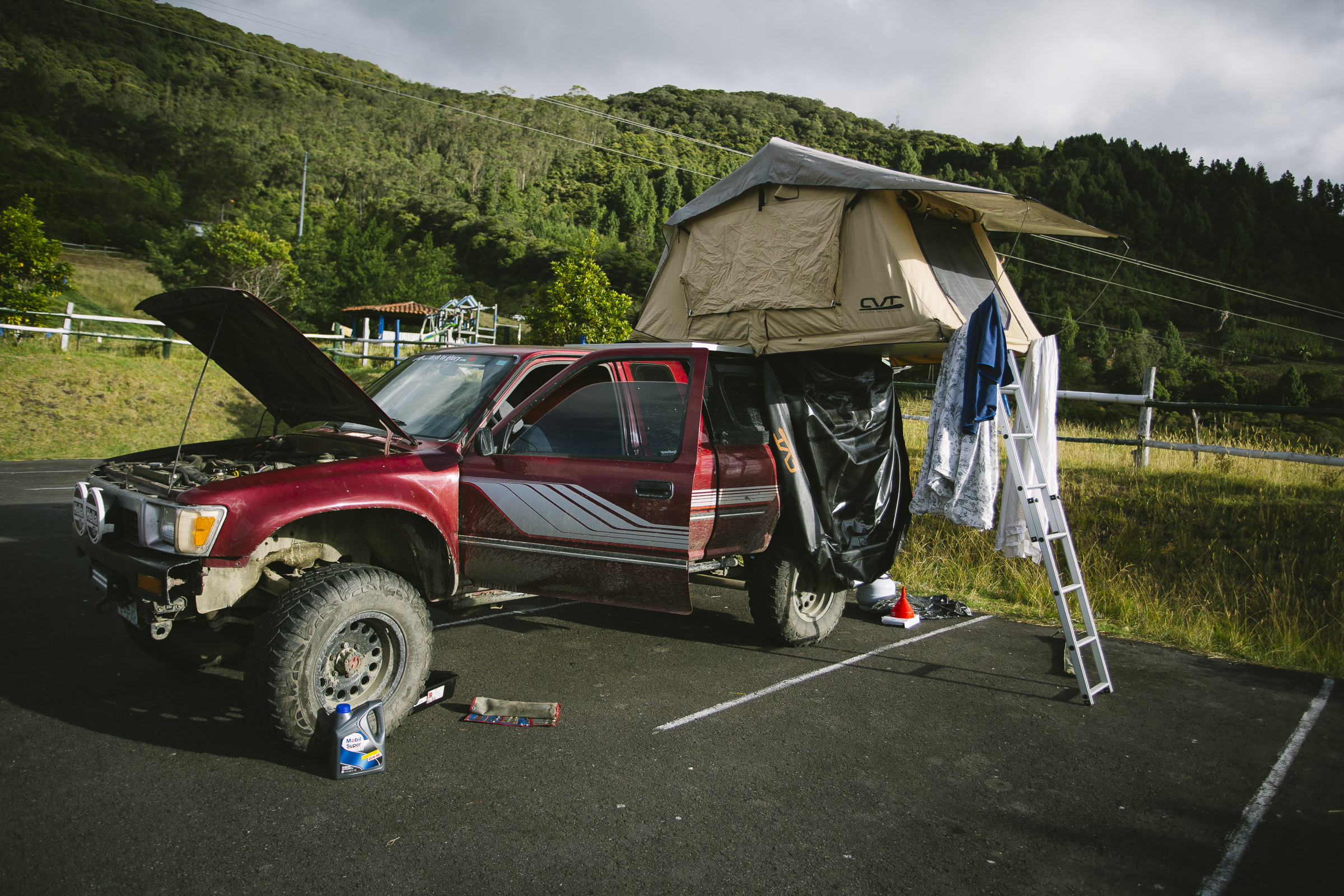 Close to the Ecuadorian border is a massive gothic-style basilica, which sprawls out over the Guaitara River. The history of this church is pretty interesting. Way back in 1754, a miracle took place in the canyon. A woman named Maria Mueces was walking with her deaf-mute daughter Rosa when they were caught in a bad storm. They took shelter between two giant lajas rocks, which are a type of sedimentary rock similar to shale (and hence, the name of the church…Santuario de Las Lajas). Squeezed between the two rocks, young Rosa pointed to one of them and exclaimed, “The mestiza is calling me!!” Lightning struck and illuminated an apparition on the rock of the Virgin Mary. The girl was now able to speak and a shrine was constructed in light of the miracle. Eventually the shrine was expanded and improved upon, connected by a bridge over the canyon in 1802, and the Santuario built between 1916 and 1949. 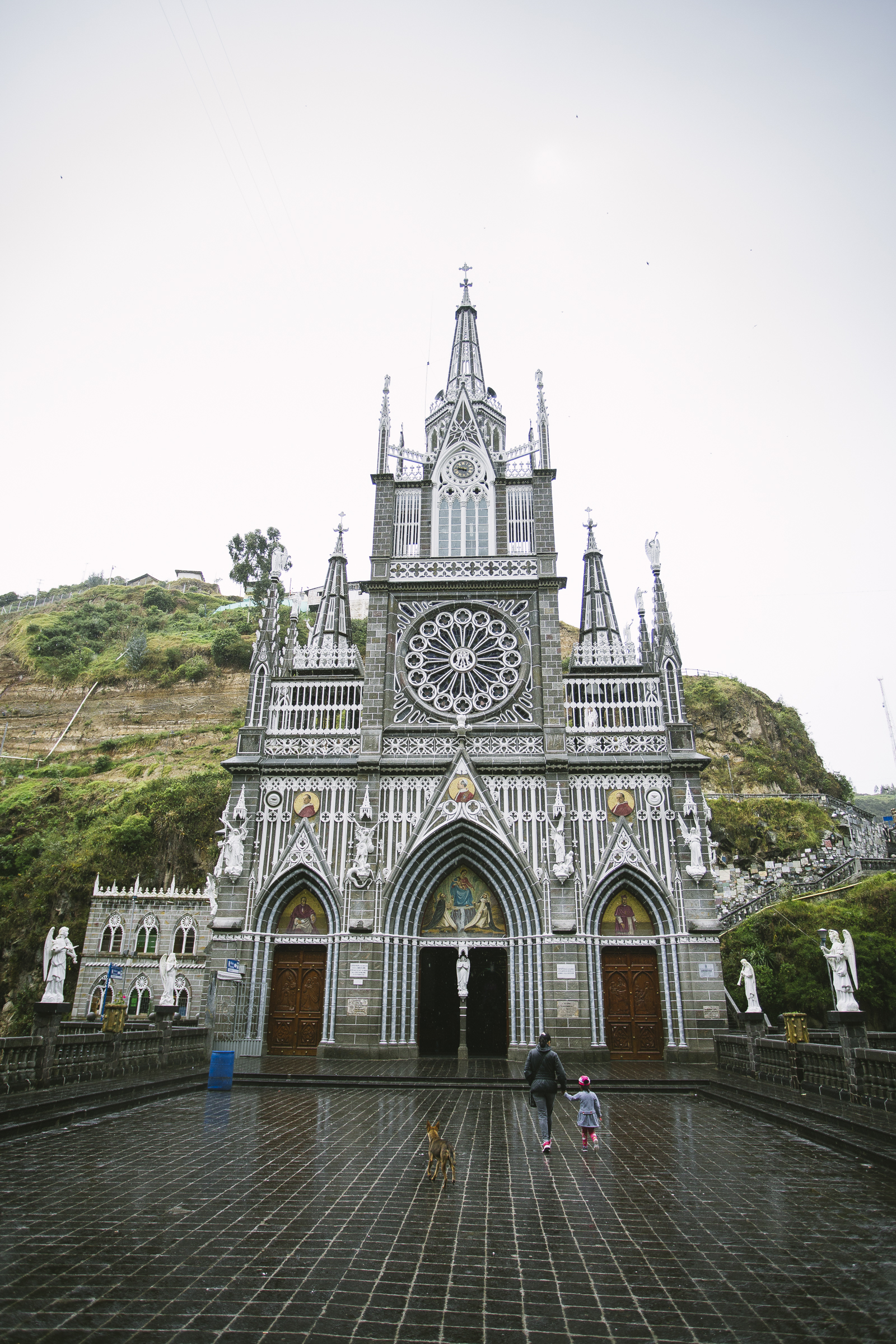 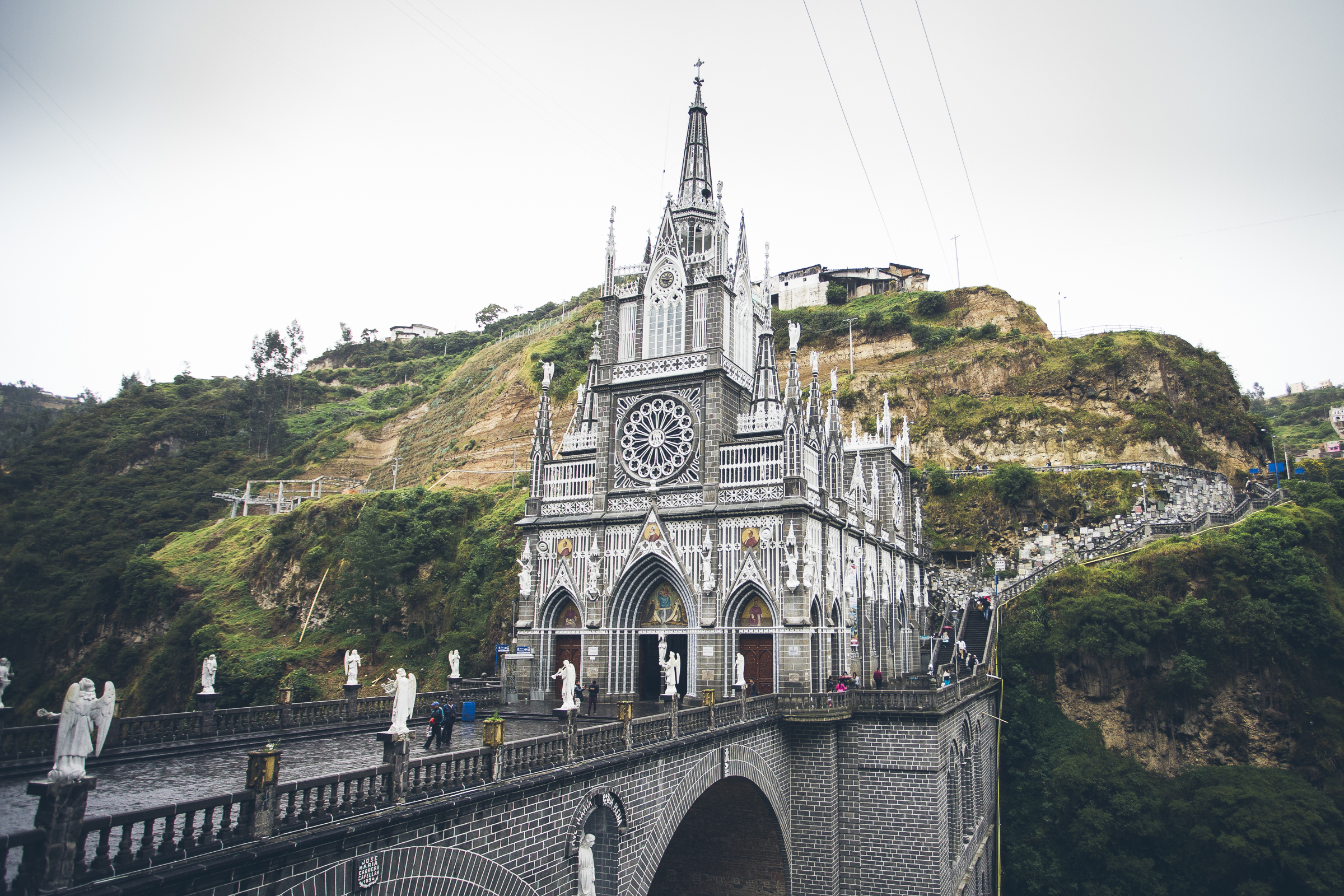 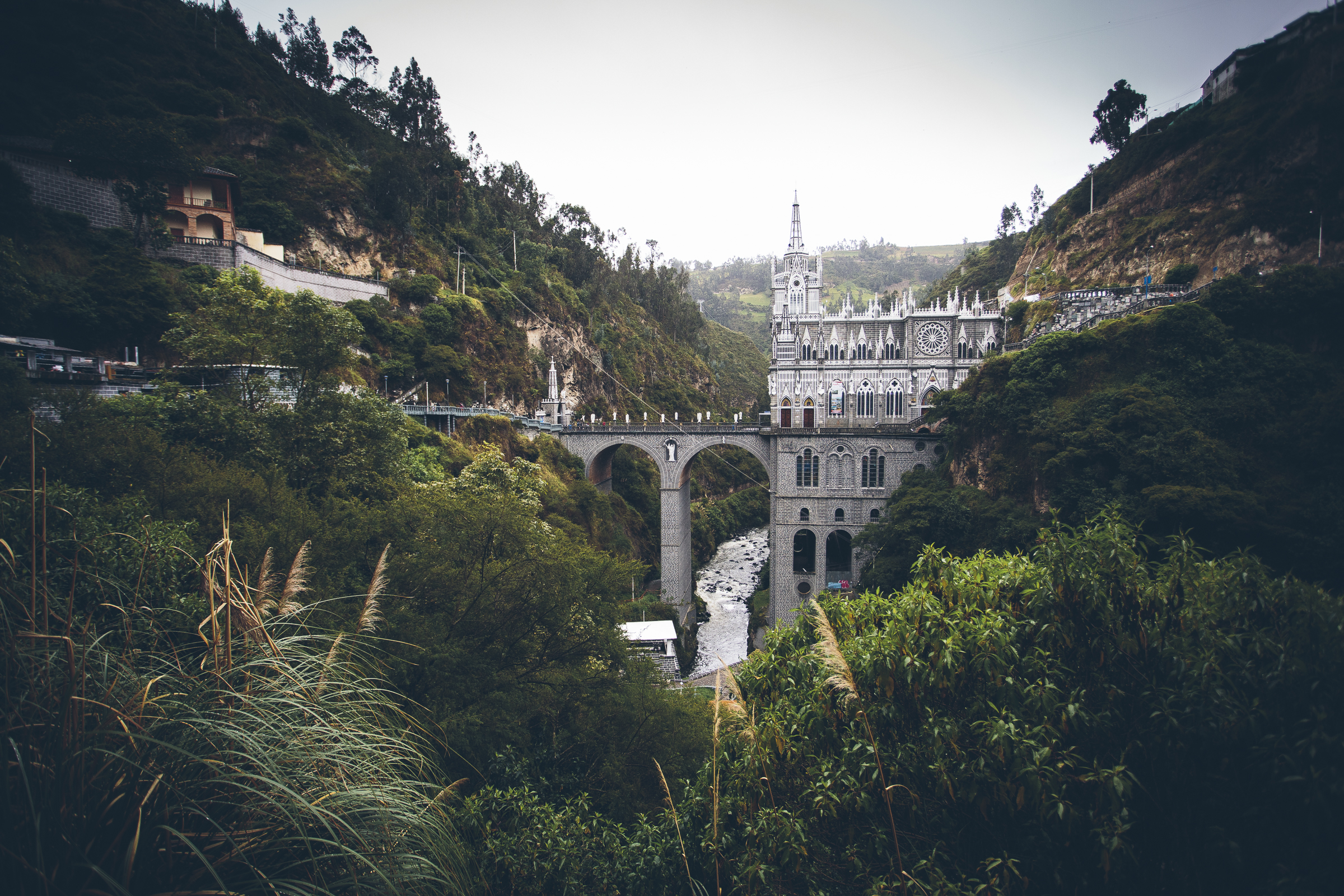 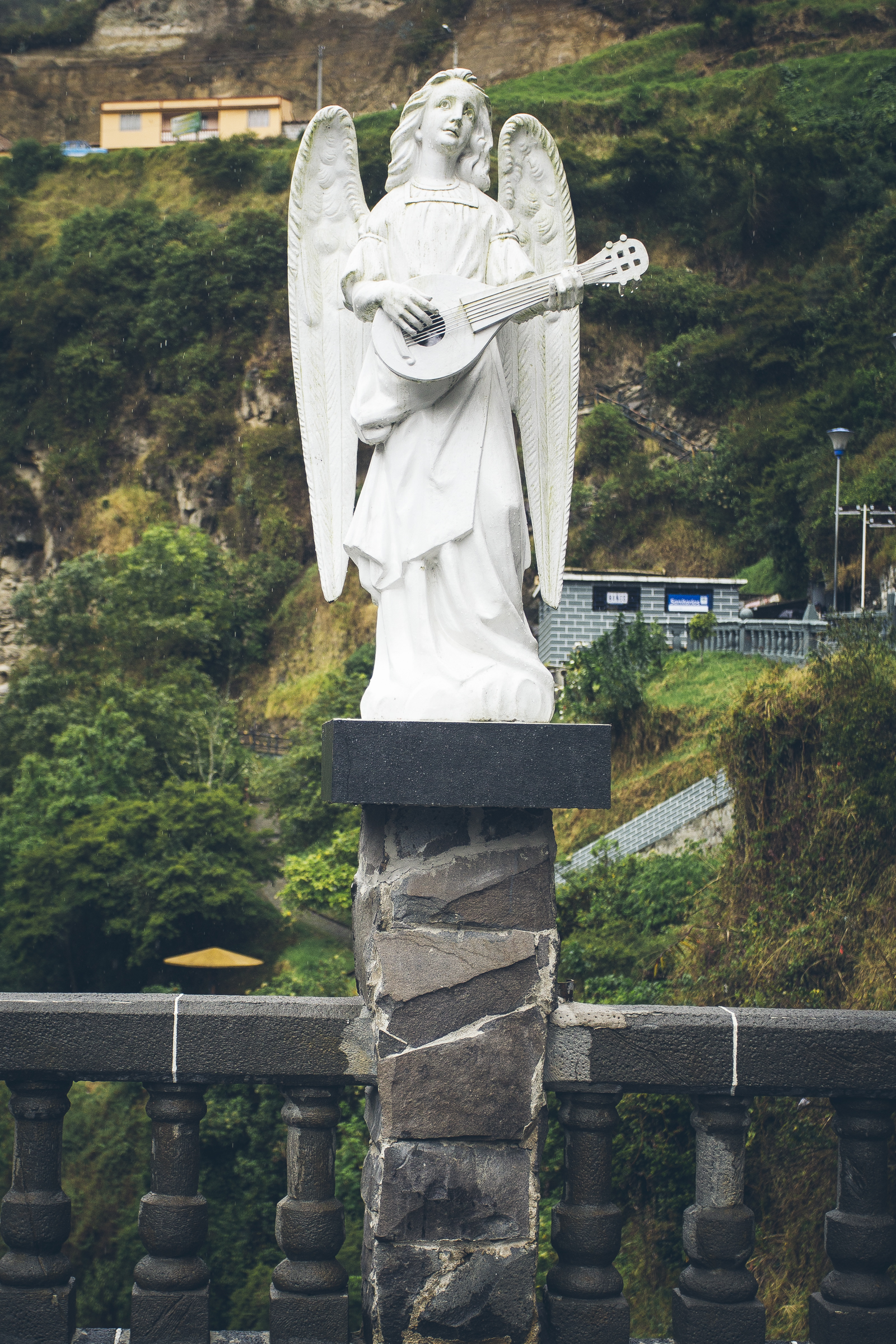 It was quite lovely to walk down the stone steps leading to the church and arrive at the impressive view of the gothic style architecture. Statues of angels stood on the walls of the bridge overlooking the canyon and rain dripped down on us as we peered into the black shrine complete with lit candles. Colombian tourists stood in front of the church entrance taking selfies. We scrambled back up the stairs, continued through the gauntlet of trinkets, grabbed a cafecito and baked treat, and hopped back into the truck to head for the Ecuadorian border. 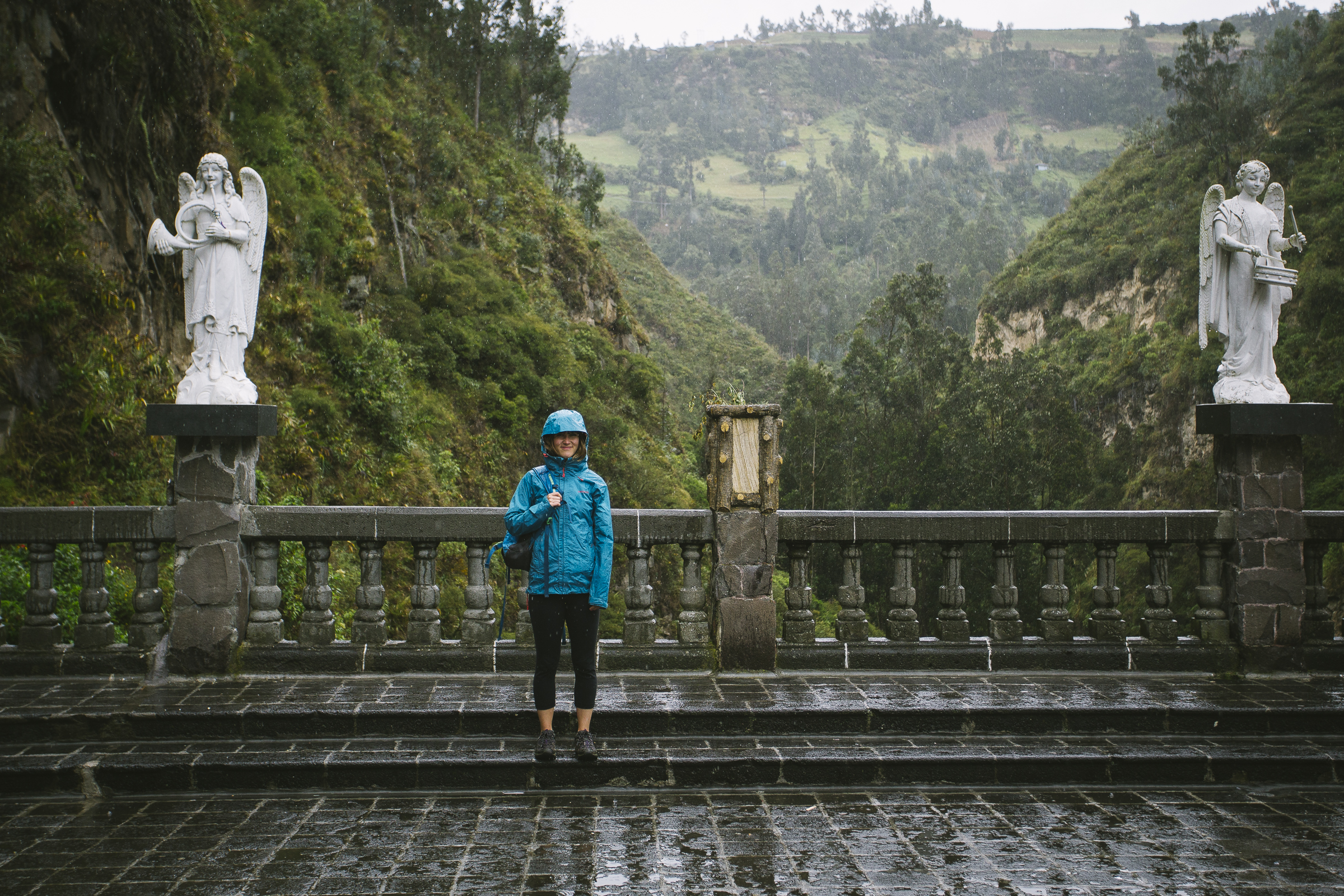 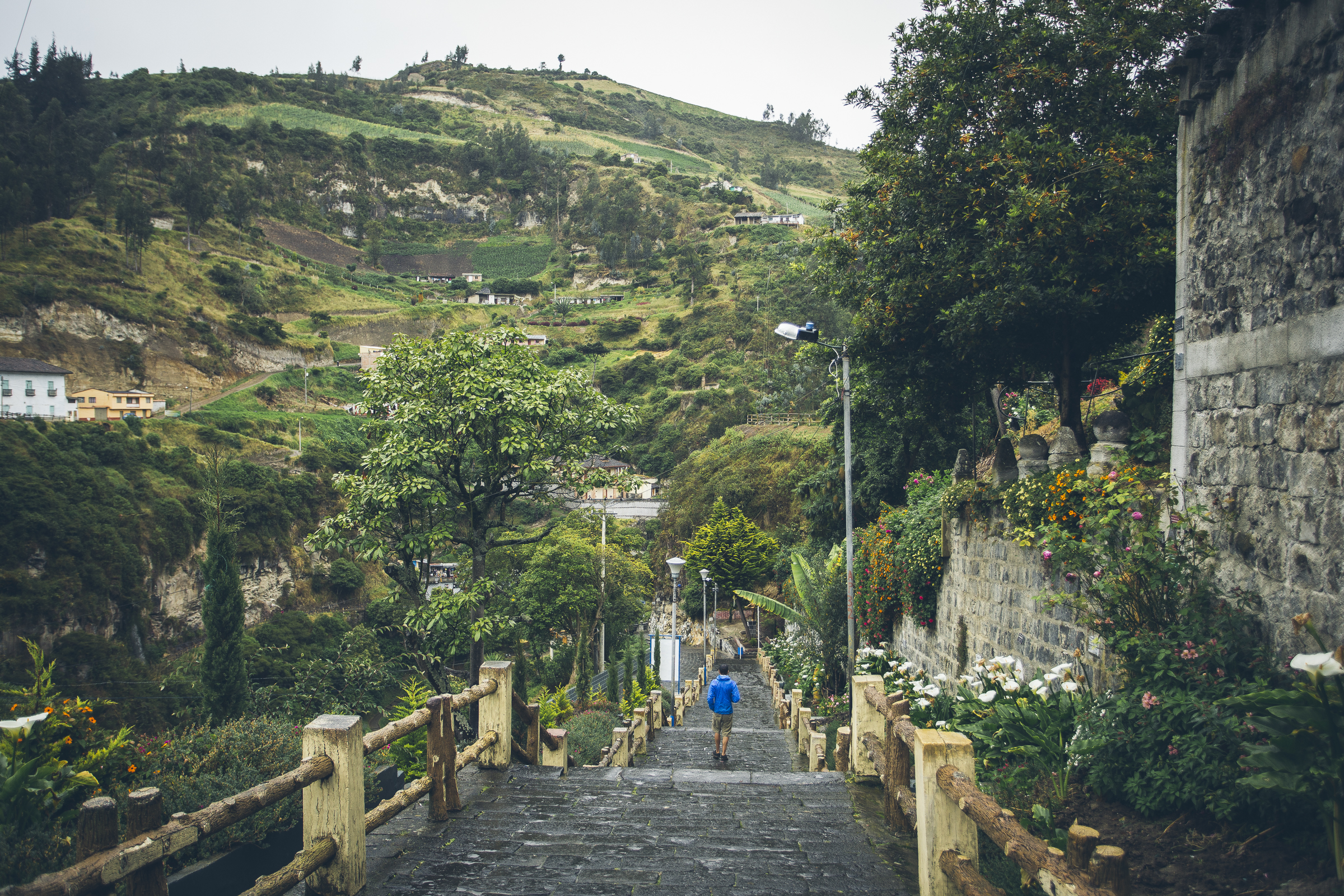