Driving the Northern Coast of Peru: Huanchaco and Trujillo

We started our drive along the northern coast of Peru by descending from the mountains. The scenery changed dramatically.  Everything dried up.  Sand dunes appeared.  Our water jug deflated.  You know how it is with a drop in elevation and all that.  #science

We stopped for lunch at a local dam with some excellent turquoise water scenery before heading to the oceanside towns of Trujillo and Huanchaco. 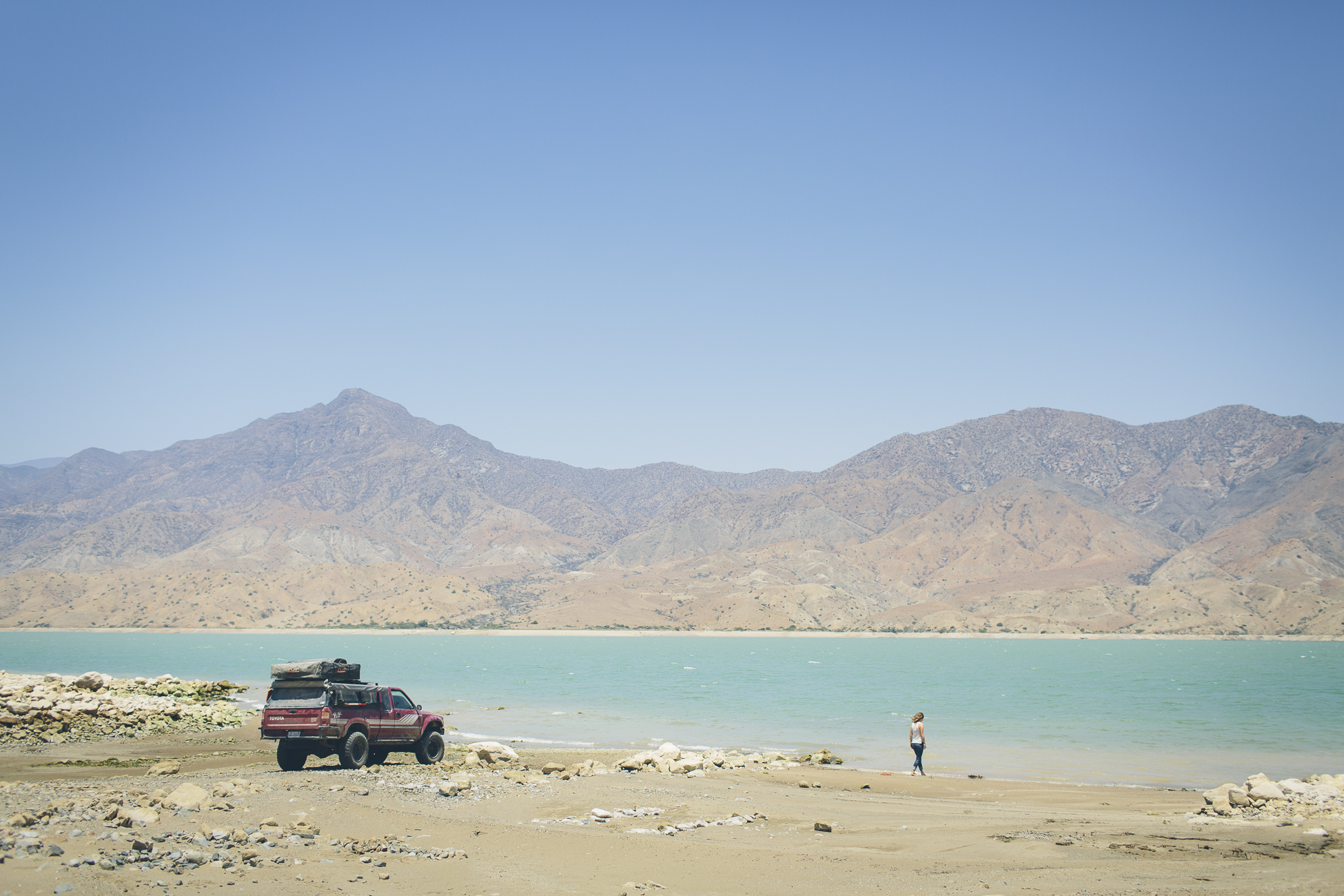 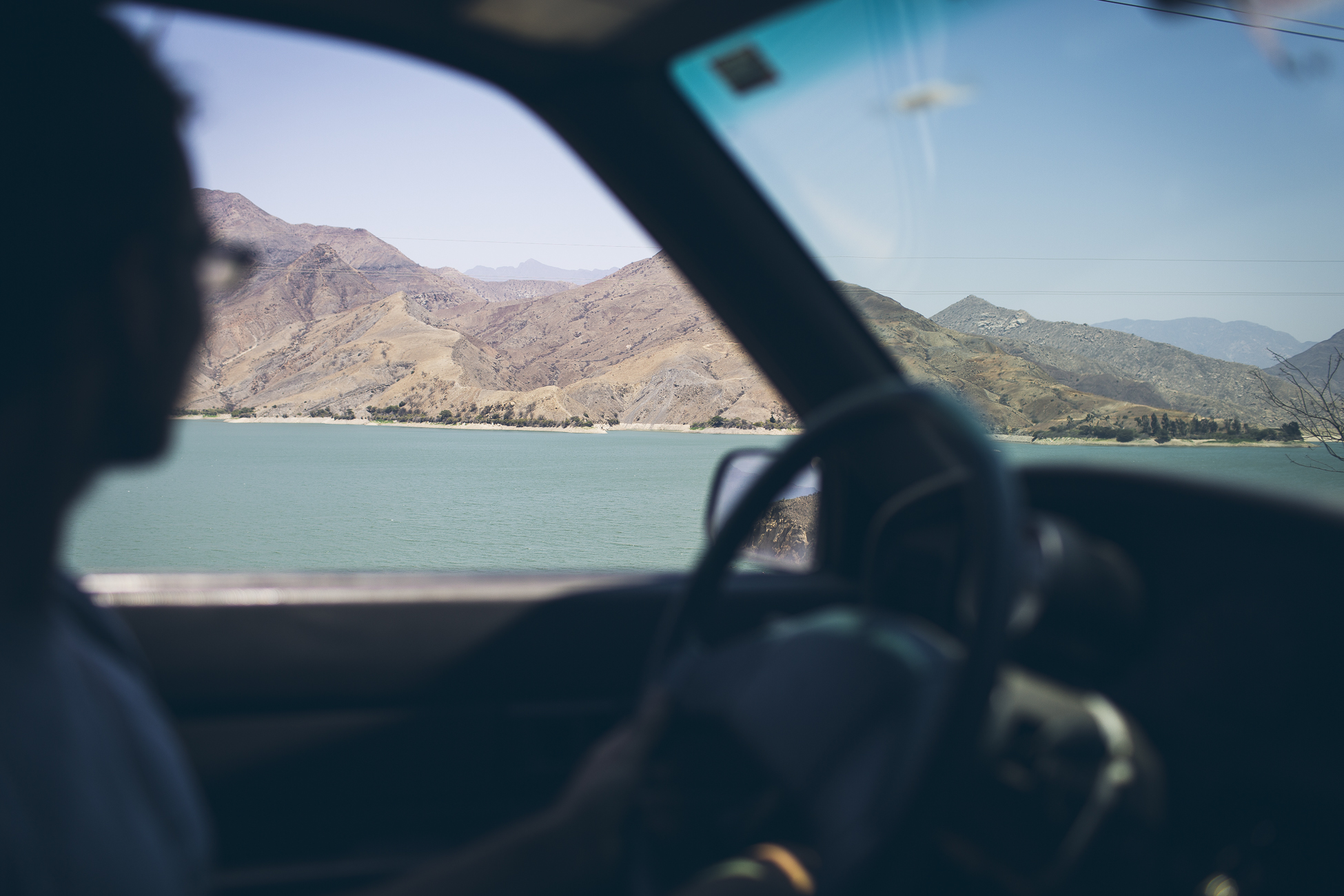 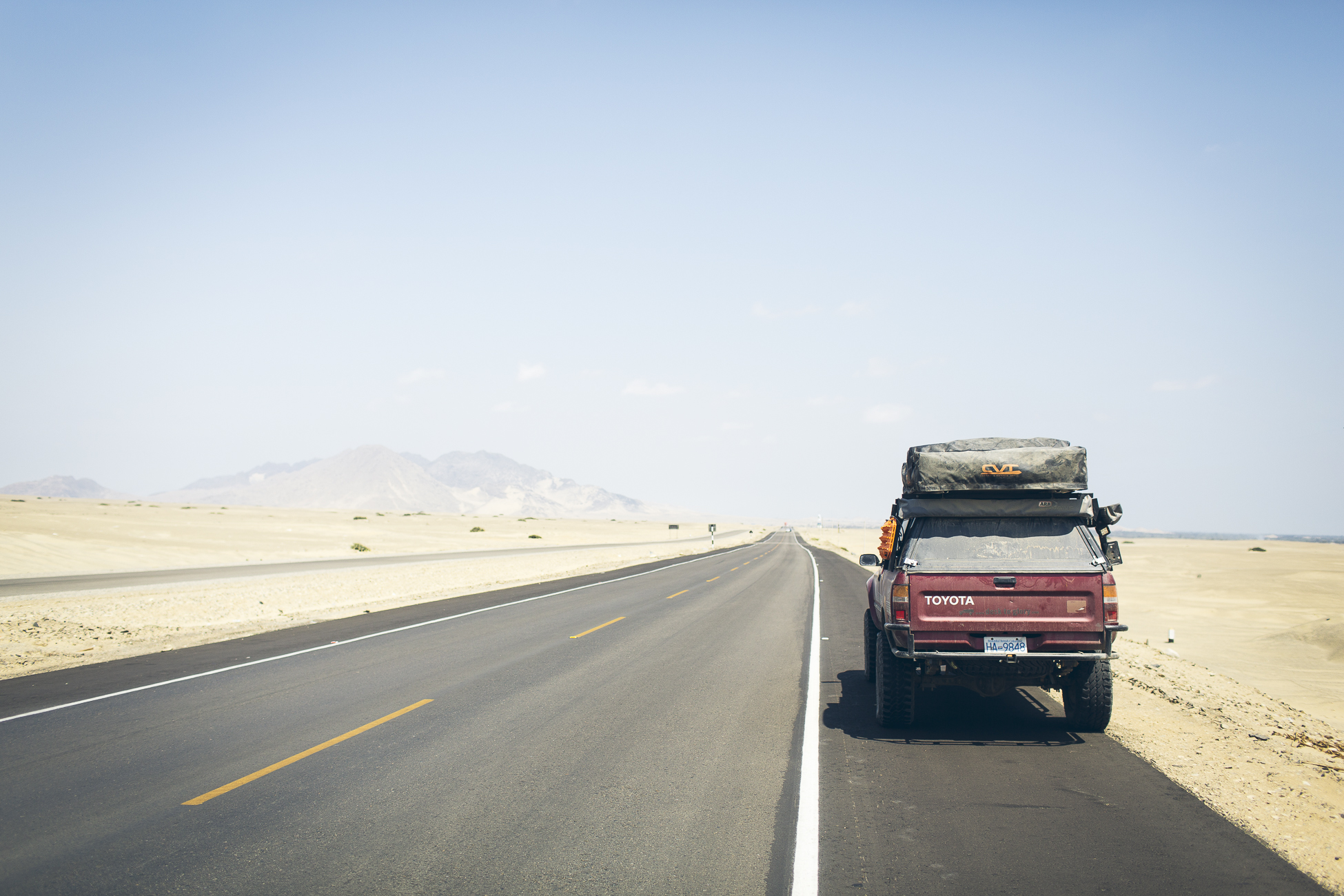 Trujillo is a big city near the coastline of Peru.  This is where we headed next, hopeful to find the parts we needed to fix up the truck.  To make a long story short, we didn’t find the exhaust pipe parts we needed or the services we wanted.  All we needed was a new intermediate pipe or a good quality welder, so the search would have to continue.  We found that many of the mechanics actually create new mufflers, “custom” mufflers, and exhaust pipe parts from scratch, and we were a bit dubious as to the quality of the parts and work.  We did a quick patch-up job on our tin can contraption and decided to wait until Lima to sort out the situation.  You know how dire the fabrication situation is when a tin can is still the preferred method of holding together an exhaust pipe.

We were pretty much done with driving through the disorganized and chaotic round-abouts of Trujillo while listening to taxis and trucks honking constantly, so we headed to our hostel in the chillaxed beach town of Huanchaco to decompress. Just to explain a little bit more about the traffic in Trujillo… this is the only place we have been where A) they have street lights for their roundabouts, totally missing the point of the roundabout in the first place; and B) the person in the roundabout is supposed to yield to the people driving into the roundabout… yes, you’re supposed to stop for the person that with inherently be in your blindspot and therefore do not see.   Maybe that’s why everybody is constantly honking their horn… half in warning and half in frustration.

Huanchaco, on the other hand, is a small touristy town known for its surfing and totora reed boats. Honestly, we had lowered expectations about the Peruvian coast, but Huanchaco won us over with its grey-blue waters lined with sand dunes, fresh ceviche, comfortable temperature, and friendly locals. As our hostel didn’t have a kitchen we stopped in at our favourite breakfast spot, Chocolate Café, every morning. We took our time and enjoyed our respective coffee/tea at the big wooden table near the sunny open windowsill decorated with a large vase of fresh flowers. Other days we sat outside under the big leafy tree and felt the cool Pacific breeze sweep over us. It was a treat to have a long and leisurely breakfast where we didn’t have to do dishes.  We even took a couple of hours of Spanish lessons while we were in town, which was a good refresher of the basics/we learned some things we probably should have known already. 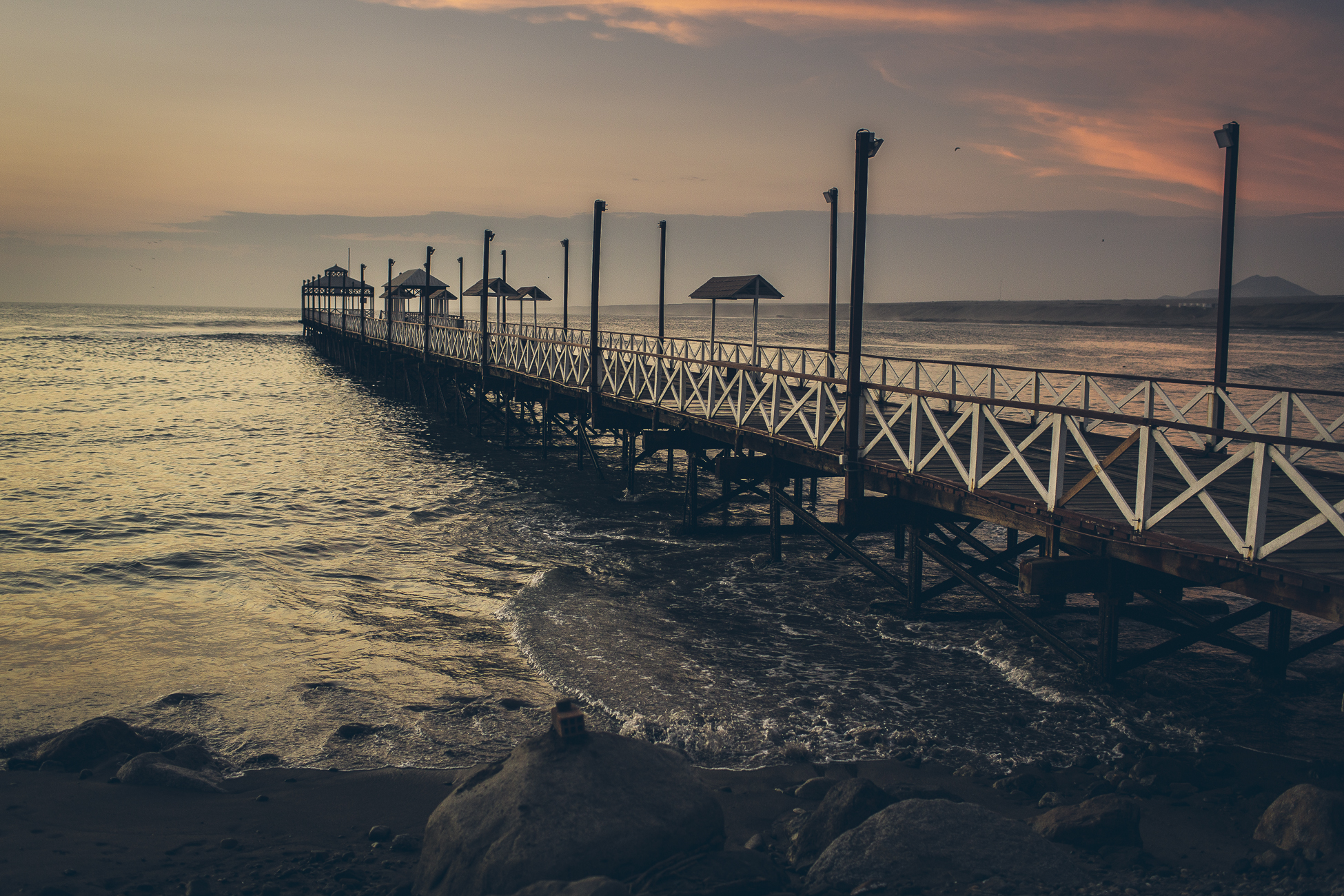 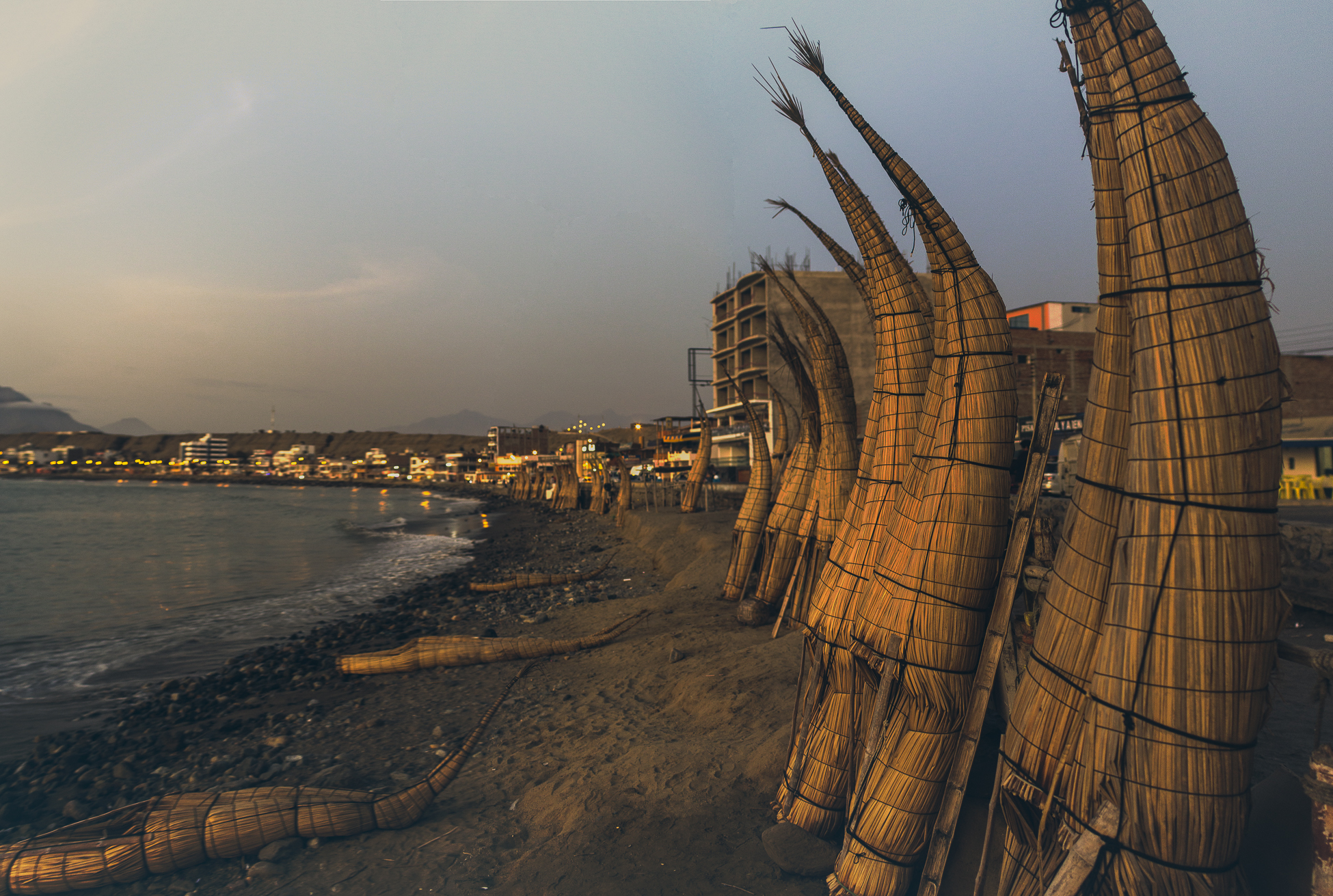 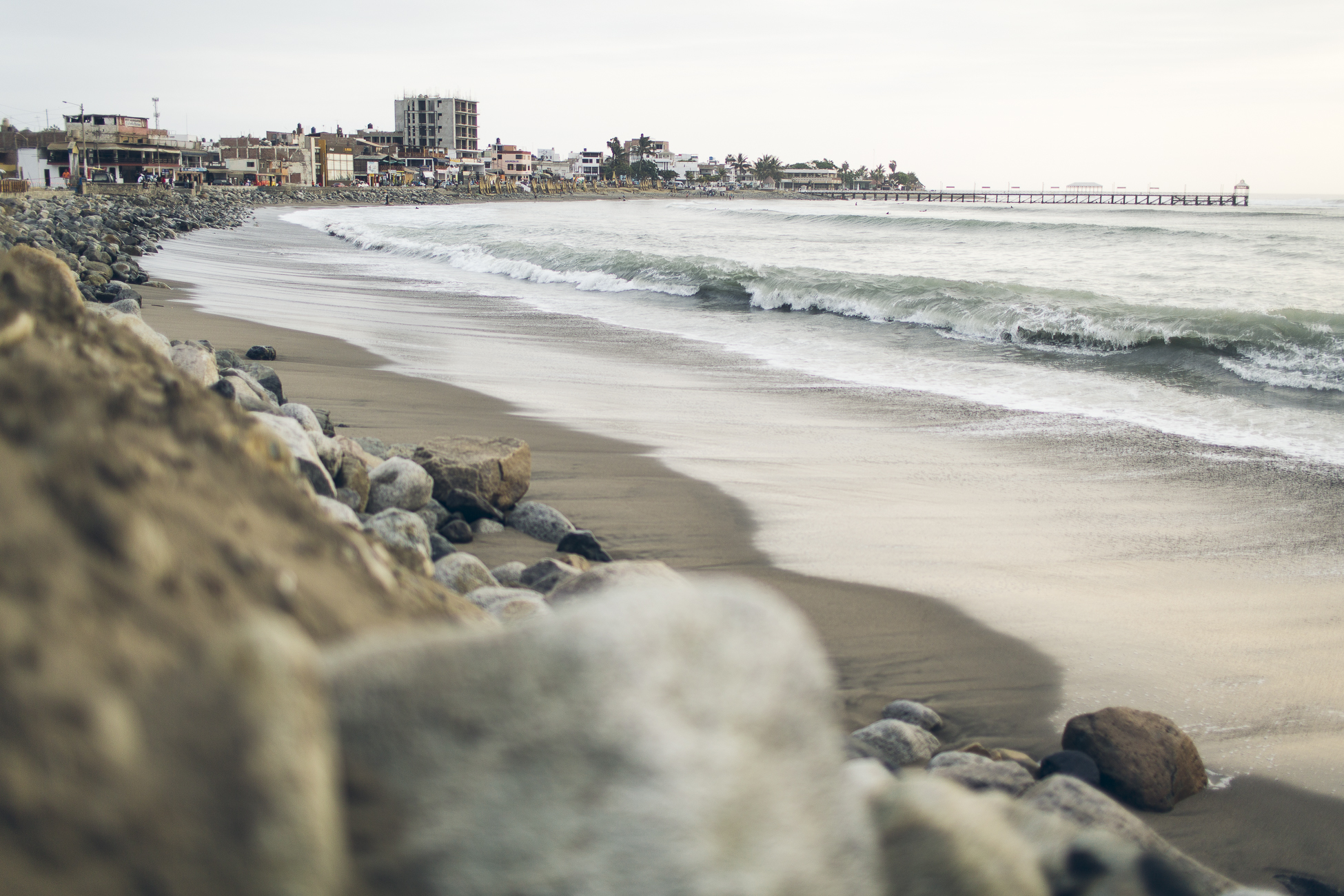 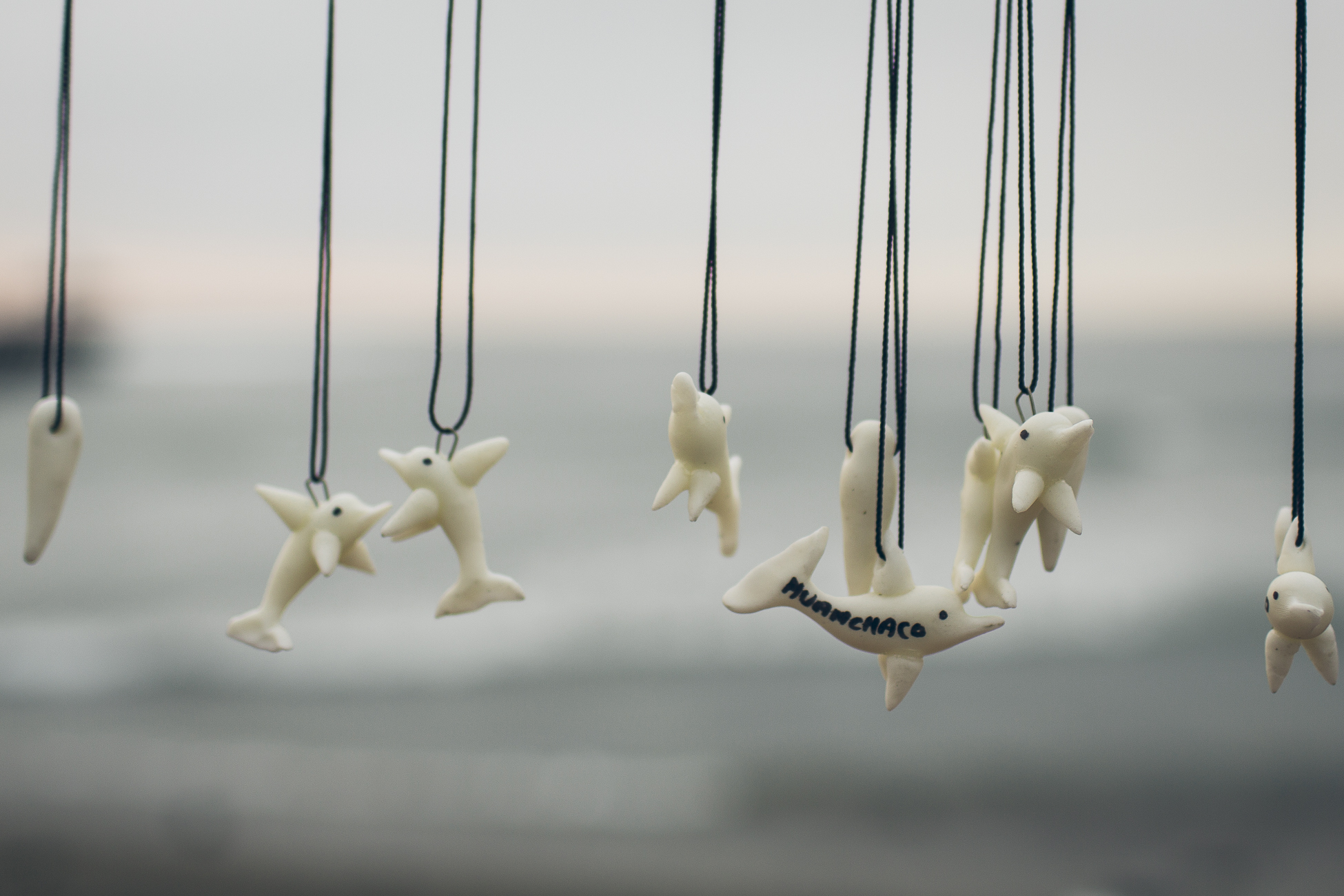 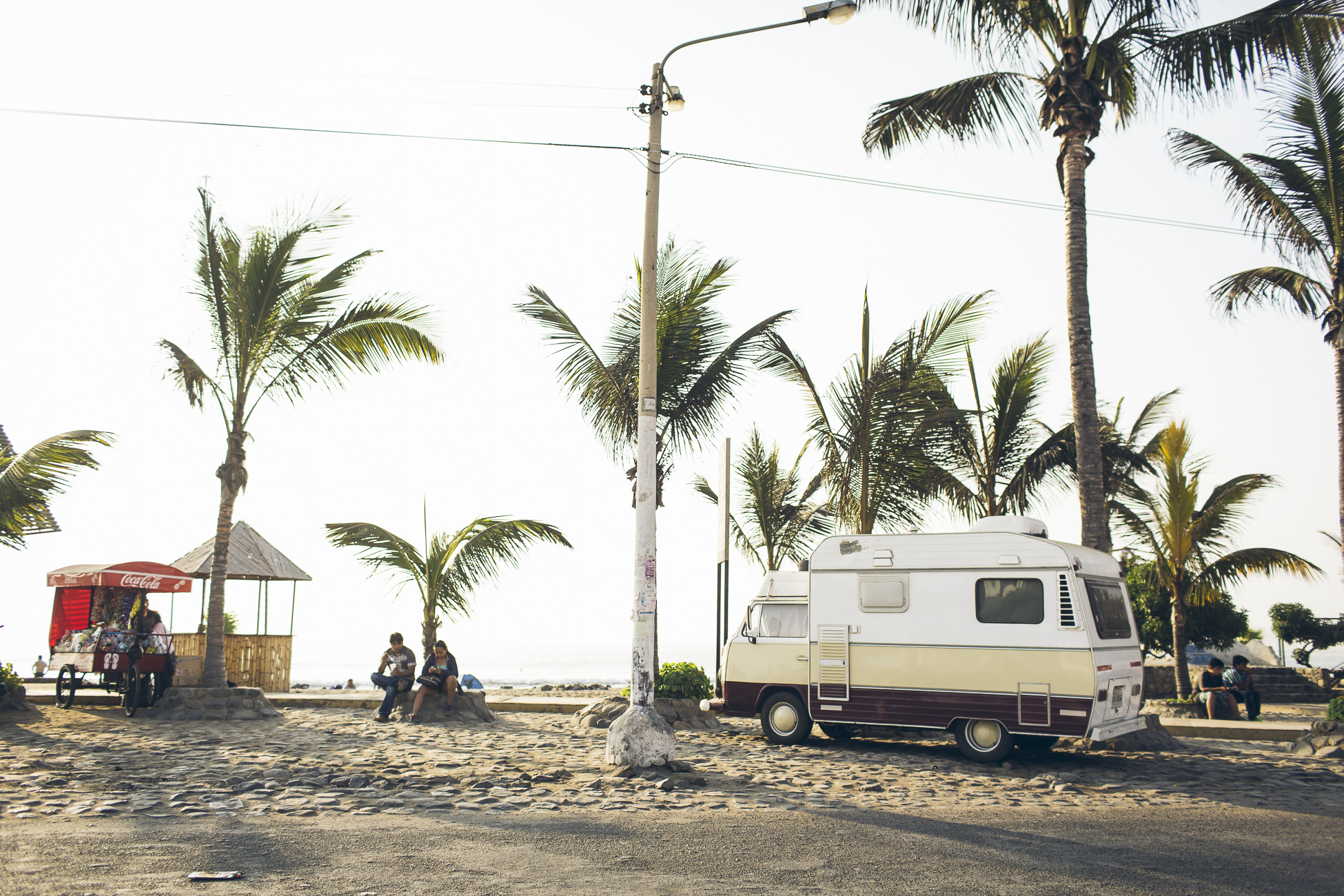 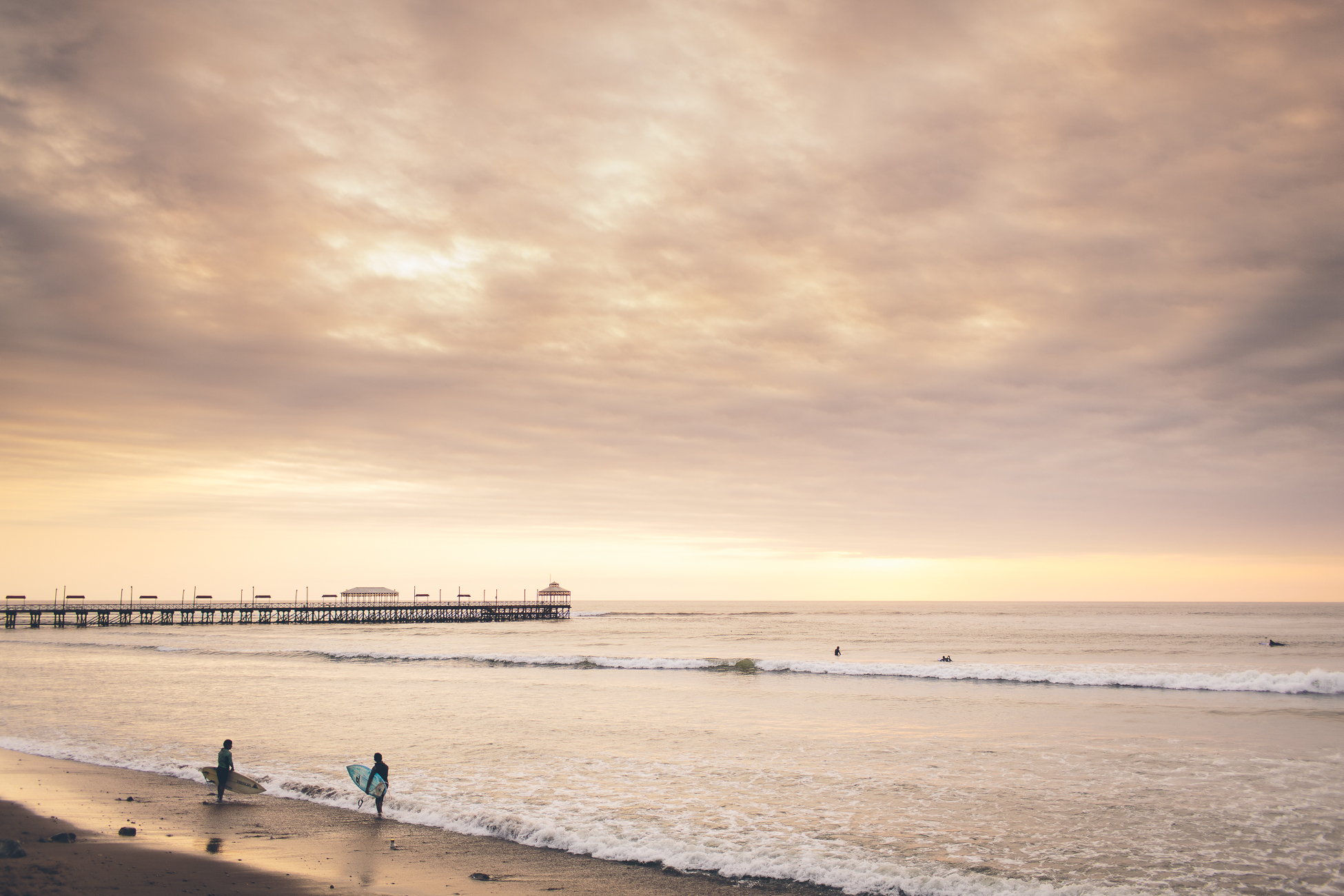 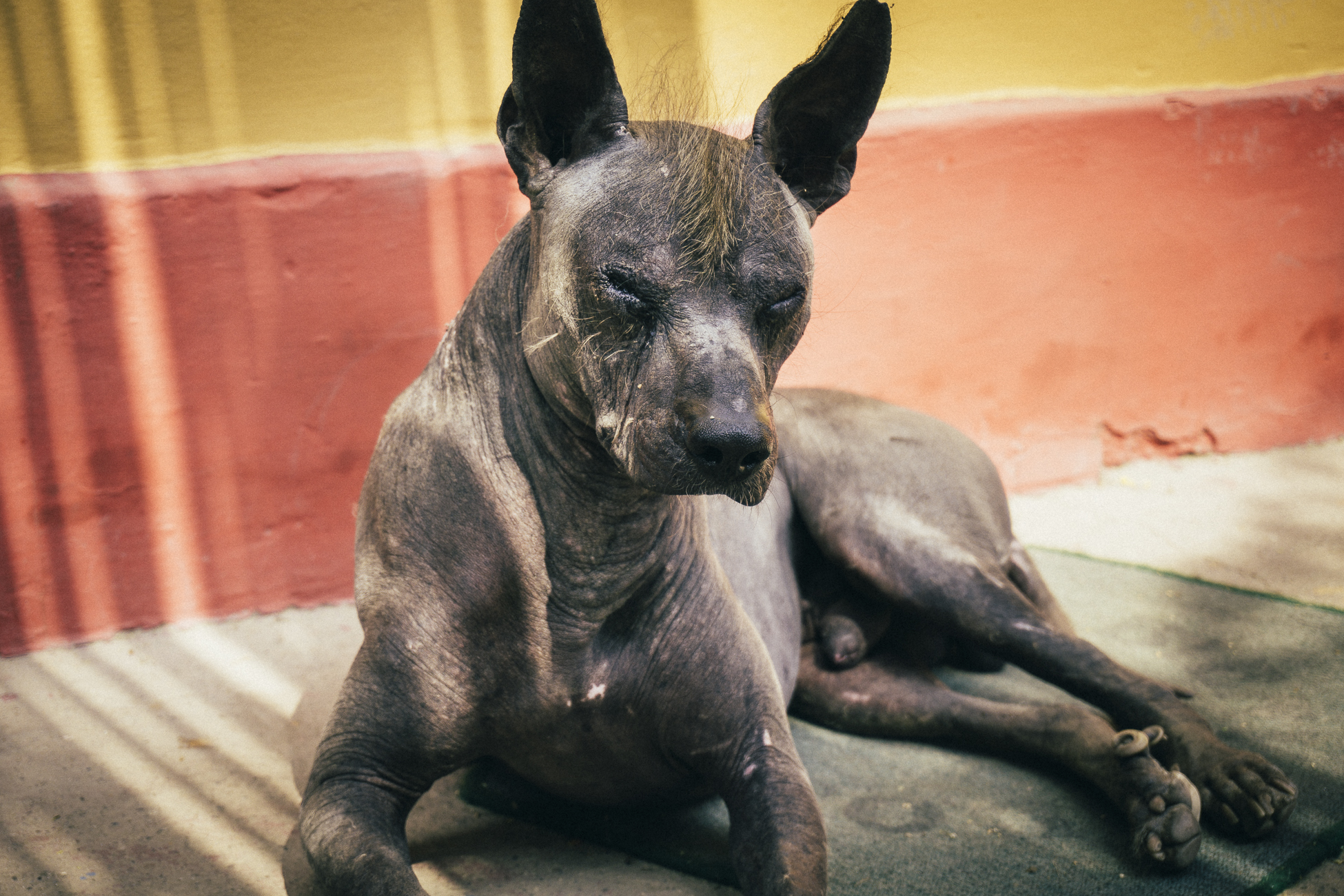 We had to try the local street food, which included papas rellenas (stuffed potatoes) and picarones. The deep fried papas rellanas were stuffed with delicious morsels such as kalamata olives, chives, and chicken. Picarones are deep-fried dough made from squash and sweet potato (healthy, right!? Vegetables!!) in roughly circular shapes with a sweet sauce made from chancaca (panela), cloves, anise and cinnamon. If you are lucky you may even get a fresh fig on top that has been soaked in the molasses-y sweet sauce. Our favourite spot for picarones was a cart in front of our hostel by the beach.  Did I mention we started jogging again while we were there? 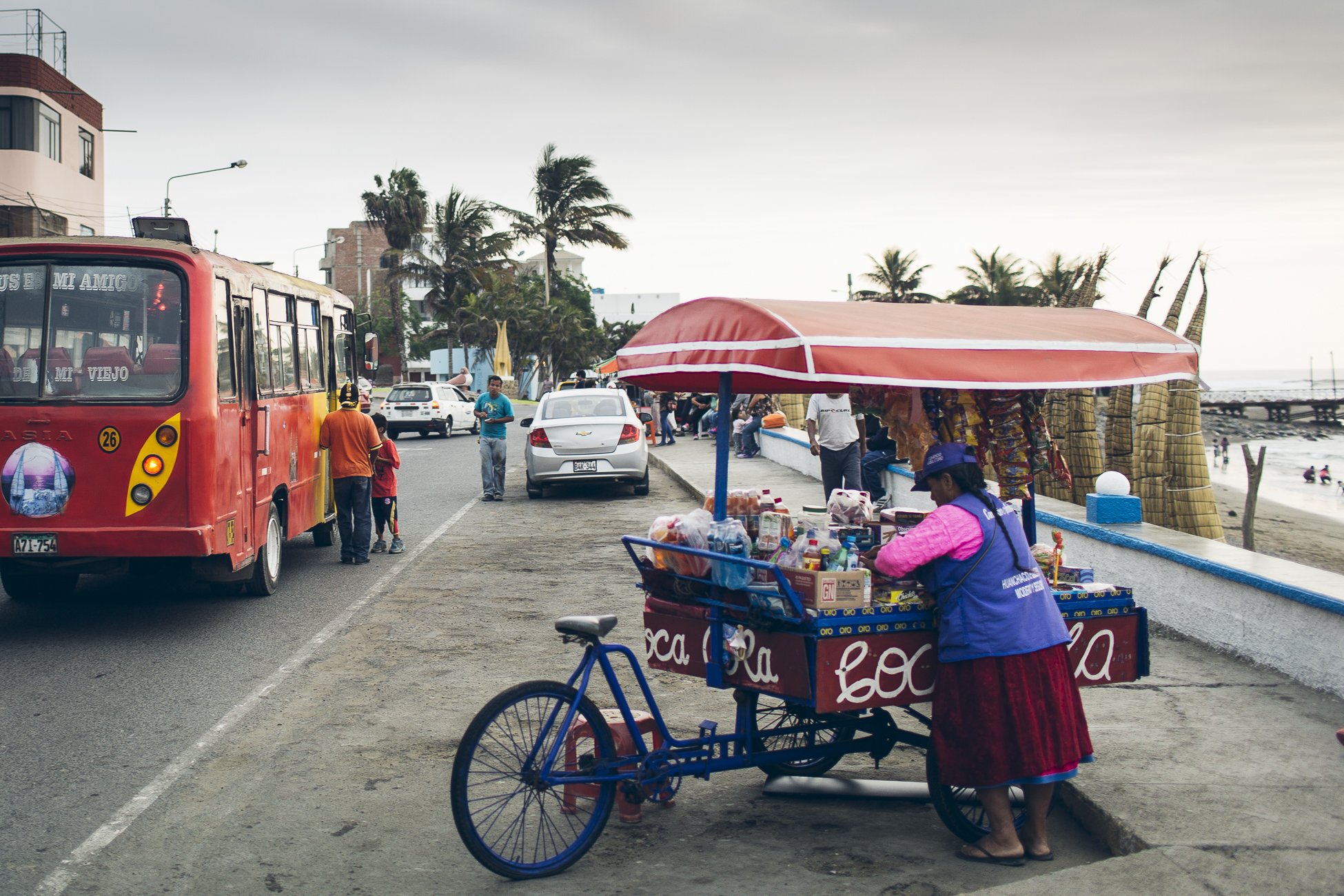 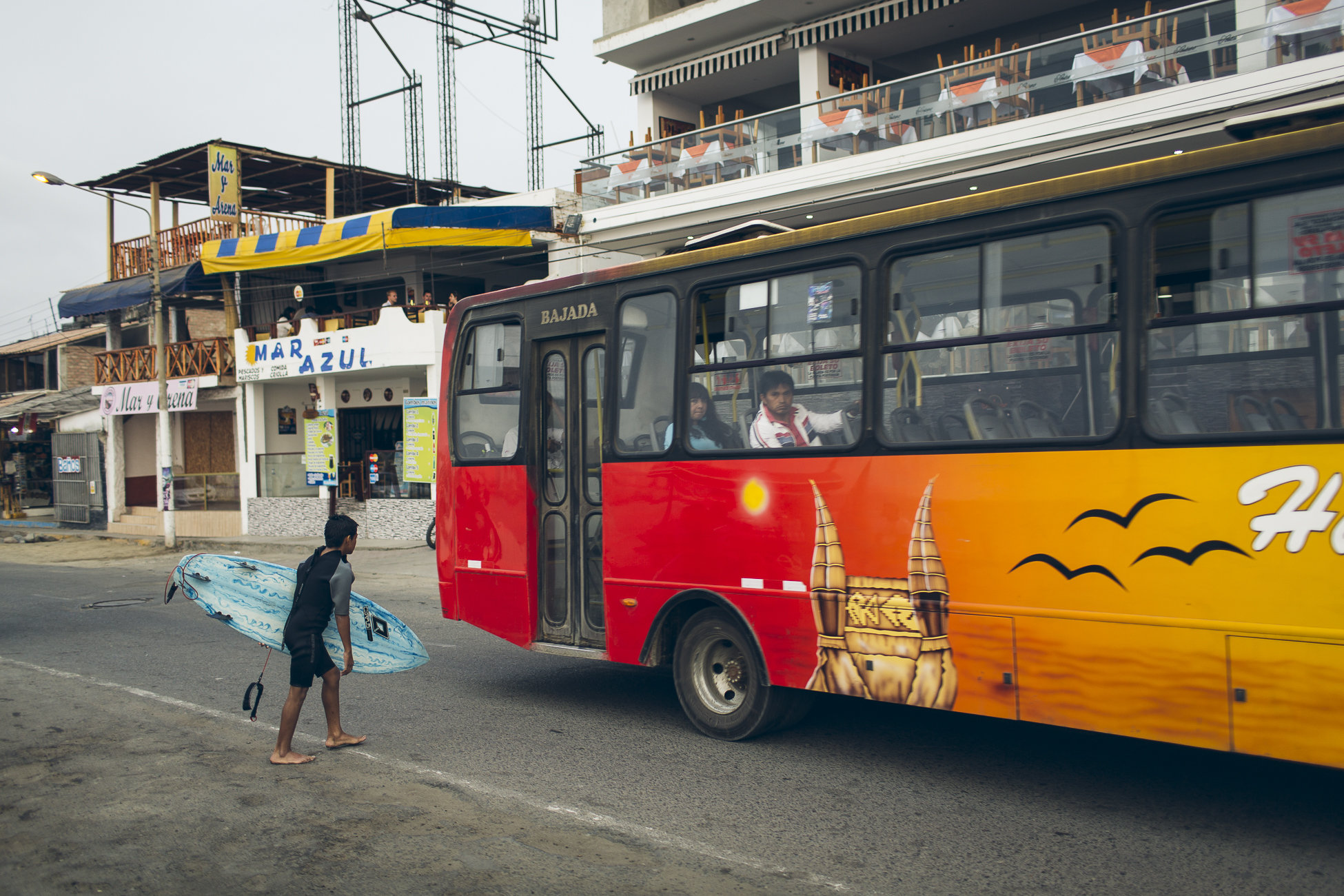 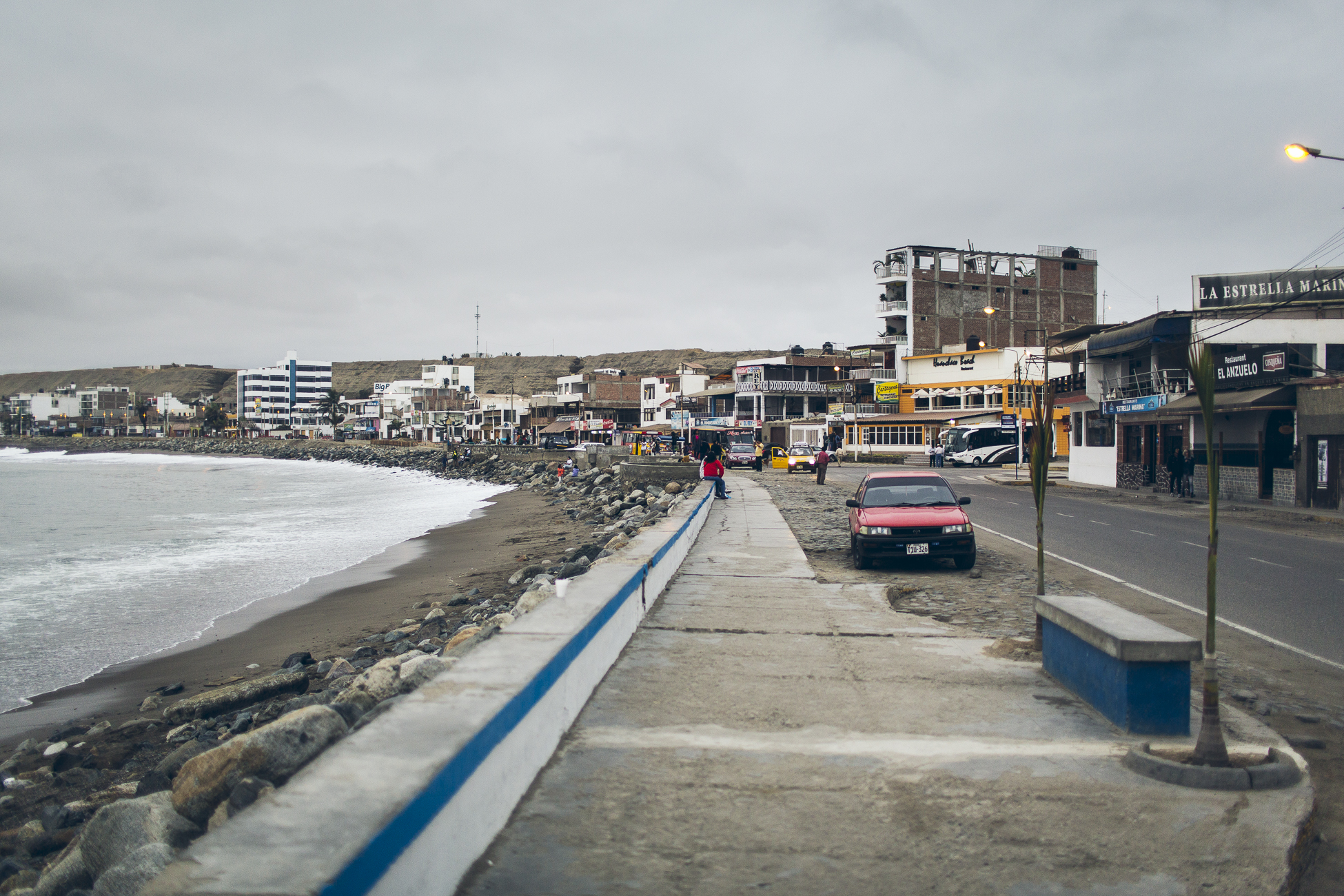 You know that the overlanding world is small when you keep running into the same people over and over again.  We caught up with Our Road Life the day before leaving town… and Ty got one more spin on the Richard-go-round! 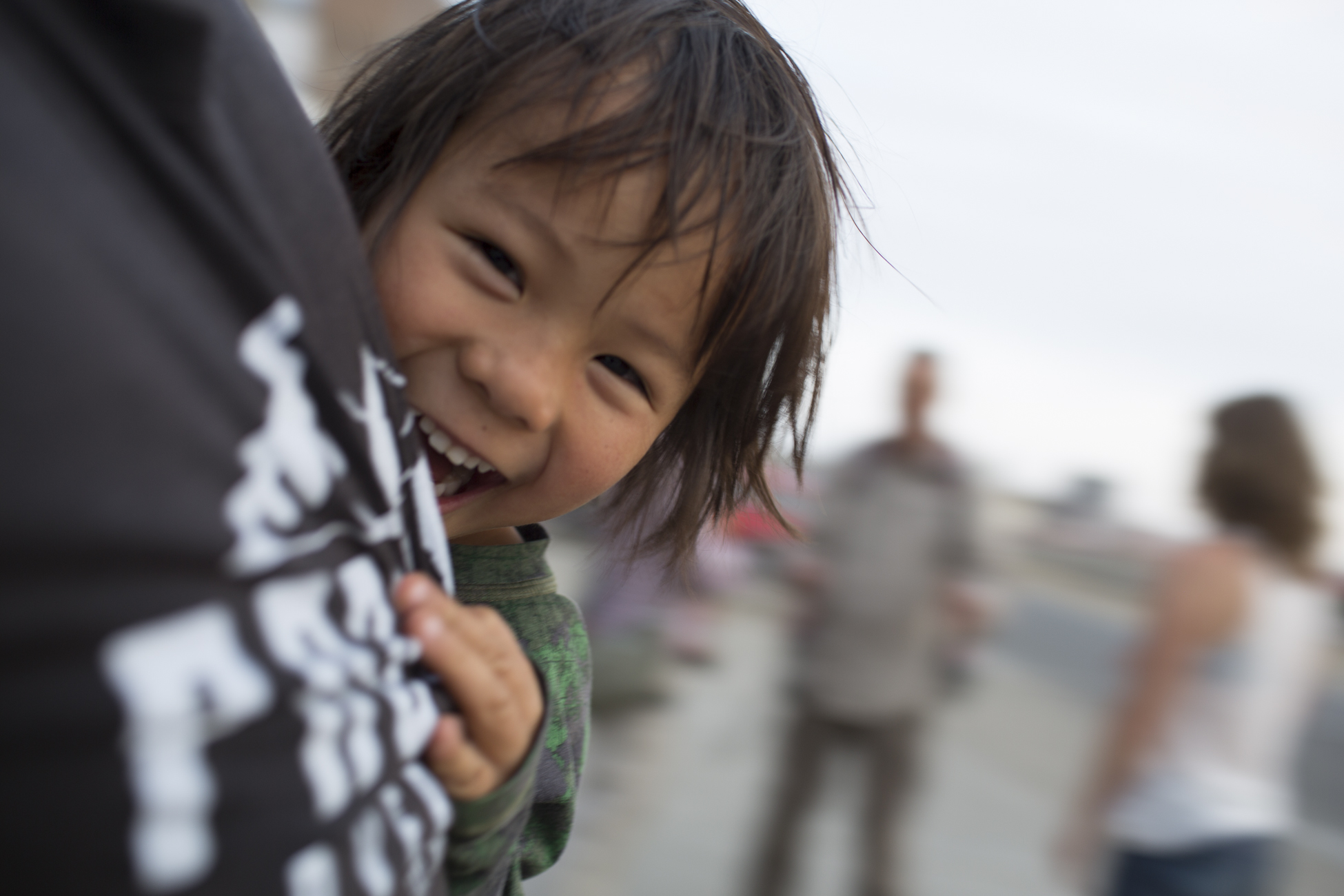 Chan Chan was the largest pre-Columbian city in South America, way back in AD 900 to 1470 before it was defeated and incorporated into the Incan Empire.  I wish I could say we learned this from our Spanish-speaking guide, but unfortunately we didn’t understand one iota of what she was saying.  Our Spanish has improved and in the past we have understood Spanish guides, so who knows what went wrong here.  Luckily for us the world wide web has enlightened us on the history and meaning of the Chan Chan archeology site.

The various complexes that made up Chan Chan included temples, dwellings, storehouses, reservoirs and funeral platforms.  The complexes were also divided between palaces and industrial sectors for woodwork, weaving and gold and silver work.  An irrigation system was uncovered outside of the walls on three sides, directing water from the Moche River.  Motifs from the natural world are very common, mostly including fish and birds (and a lot of sea nets) carved into the sandy walls.  Erosion has taken its toll here as the site is relatively close to the ocean and the winds are fairly strong. 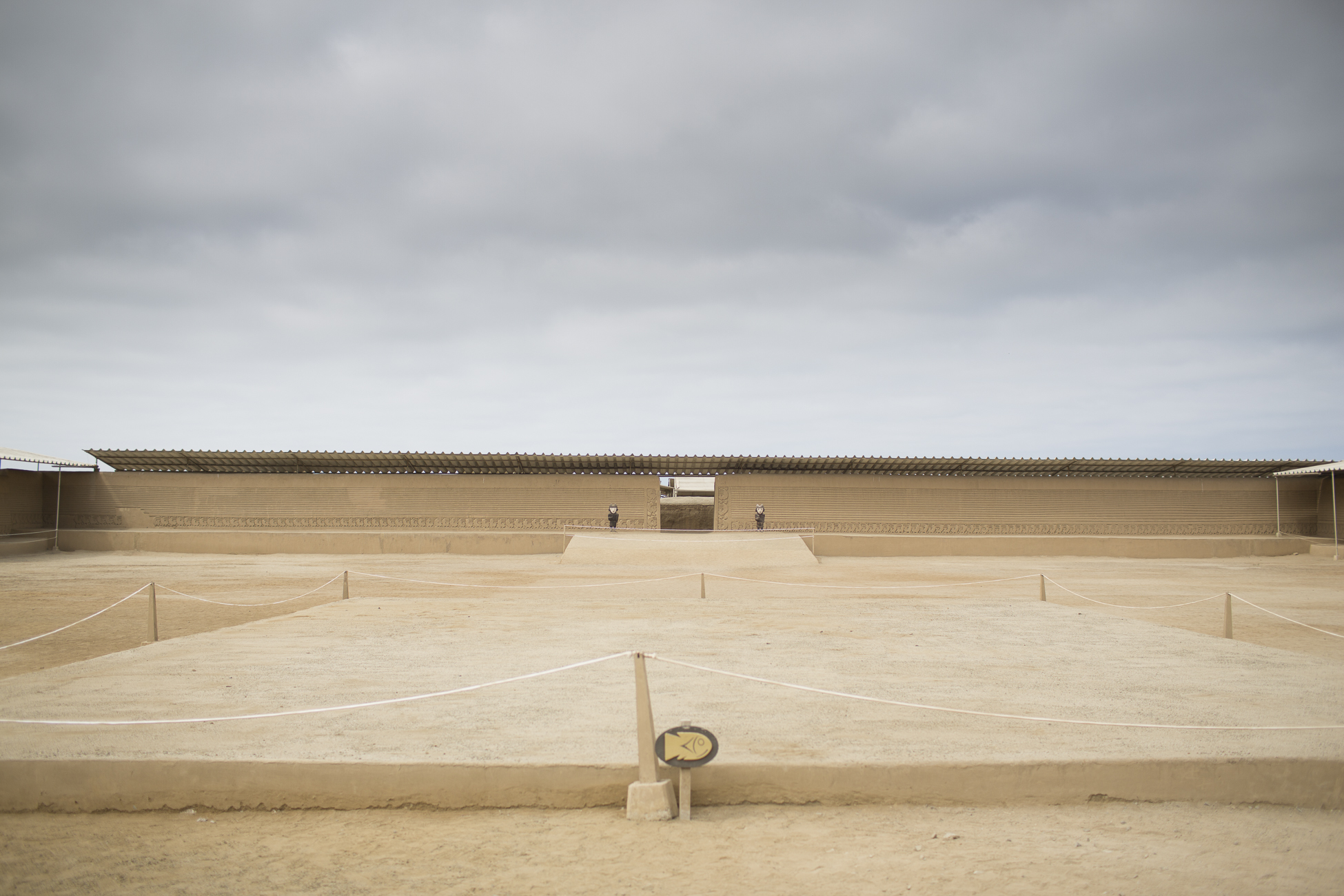 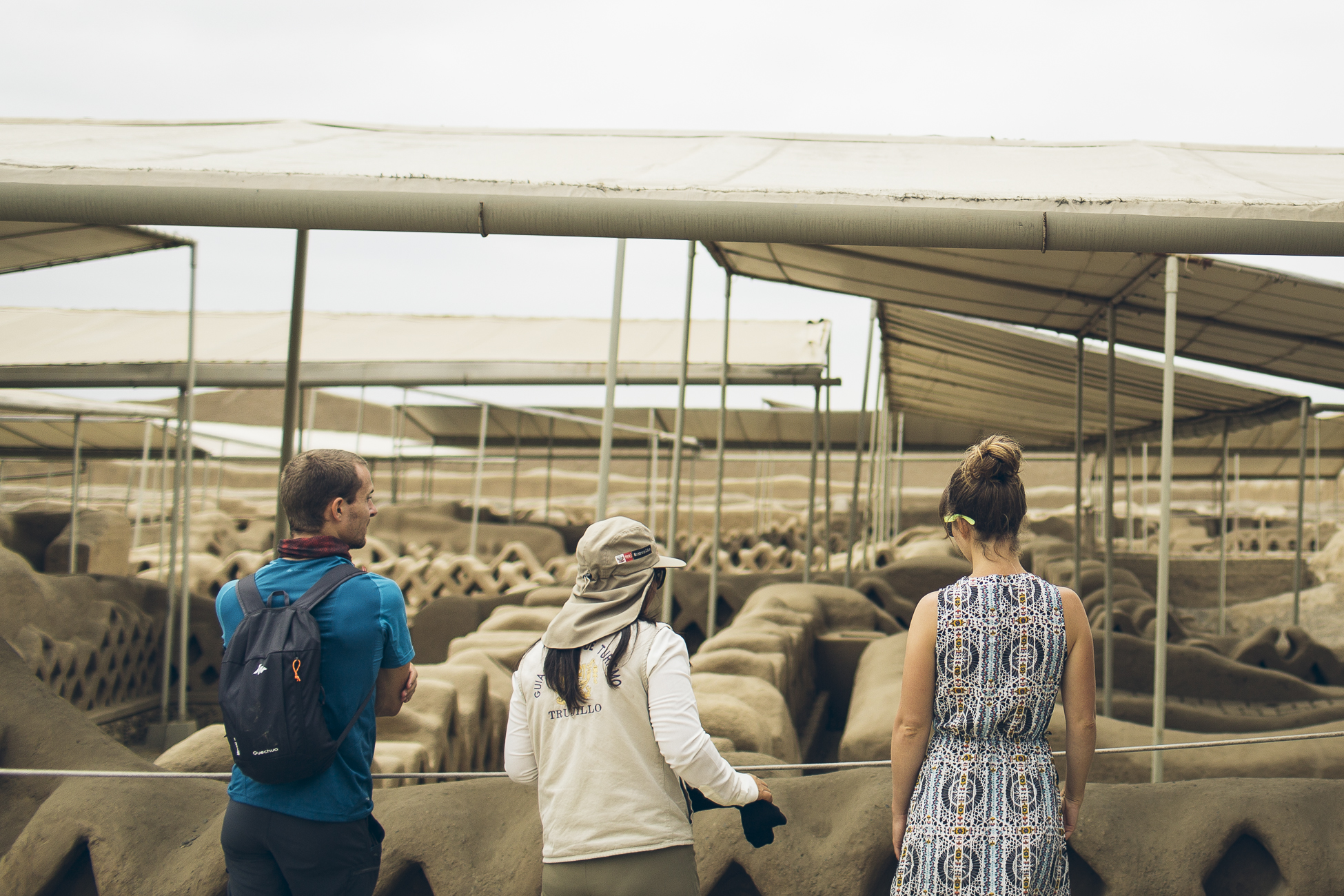 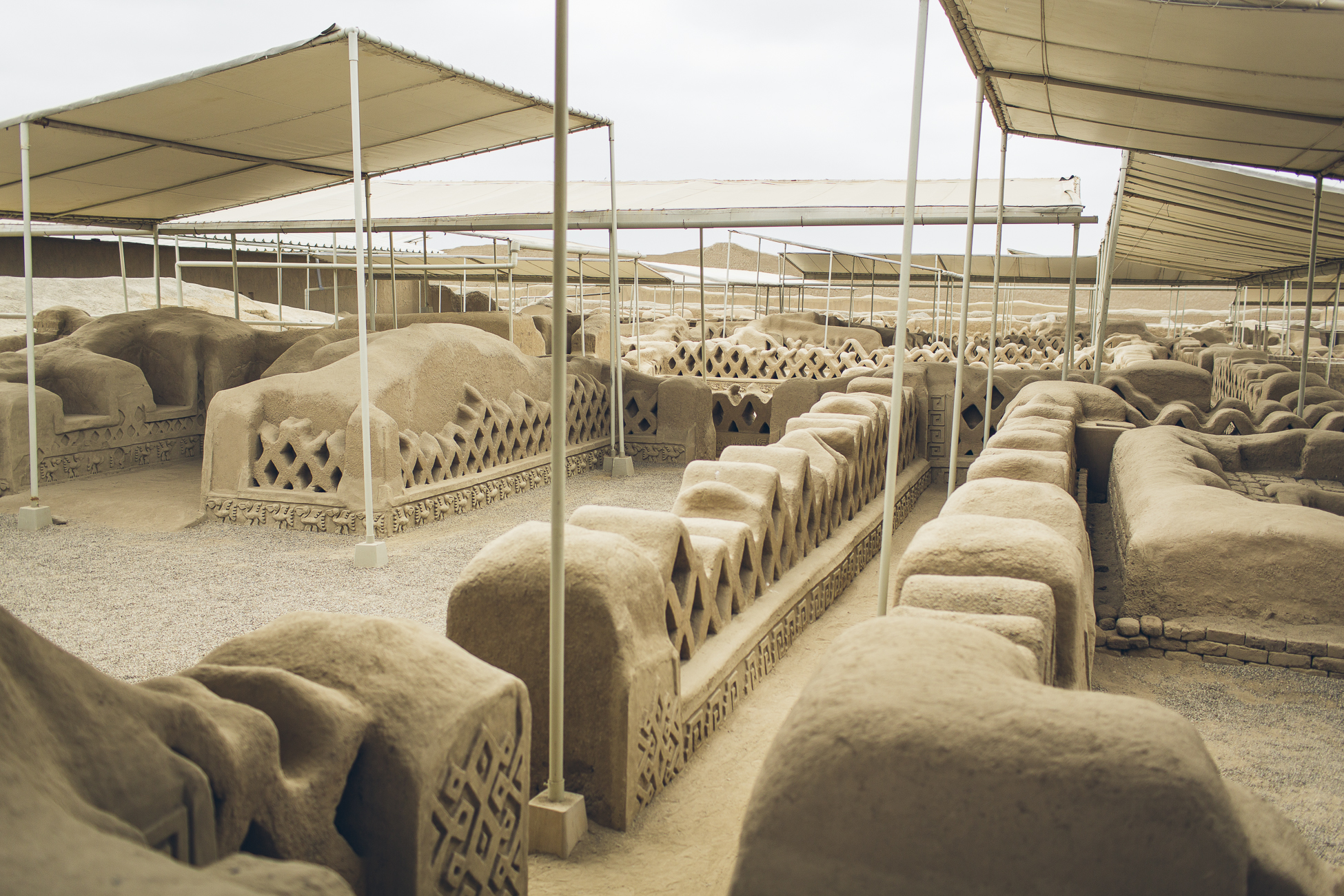 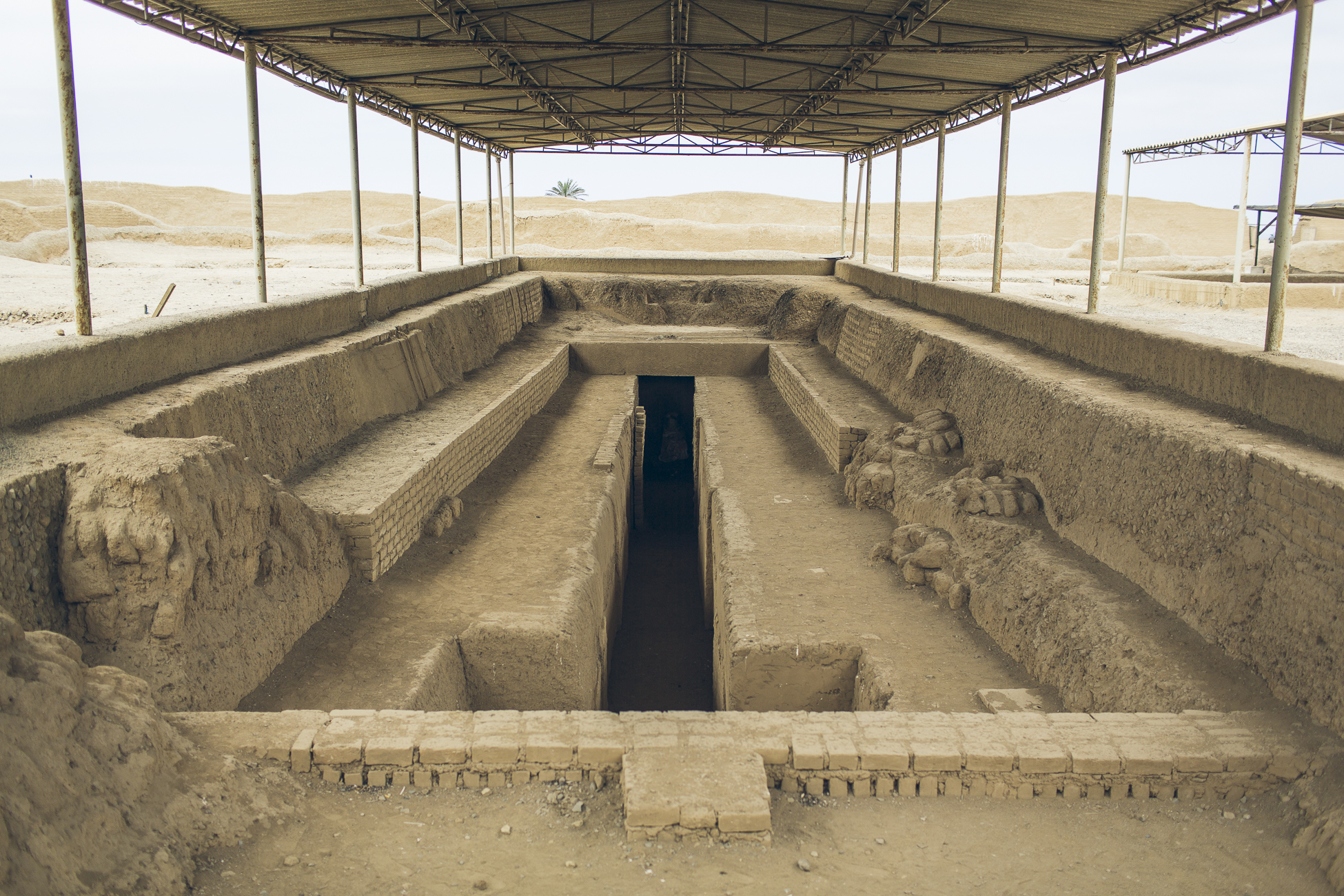 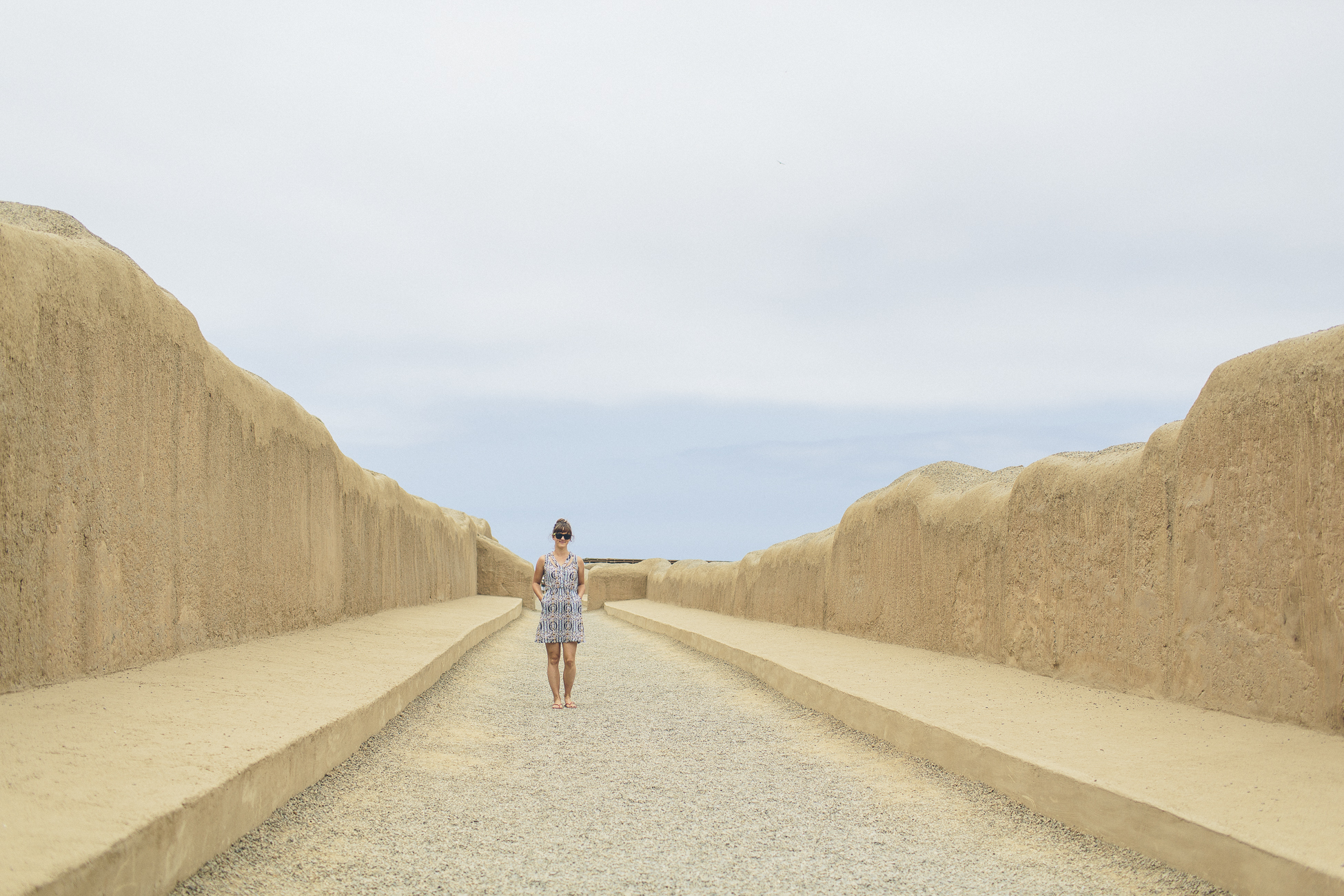 Here we had an excellent and complementary English-speaking guide and it made a world of difference.  These pyramids were probably one of the most fascinating sites we’ve been to, largely due to the great guide we had, but also because of the way the pyramids were built and how incredibly preserved they are.  And we got to see an open archeological site, which fulfilled our childhood dreams of being archeologists.  Huaco del Sol was not open for visiting but we did tour through Huaco de la Luna.

Huaco de la Luna has various layers to it, all of which are in different stages of excavation.  The brightly coloured murals are still in quite good condition.  Our guide explained that the Moche people (100 AD to 800 AD) would live in the temple for a period of time, then bury it, and build another overtop. 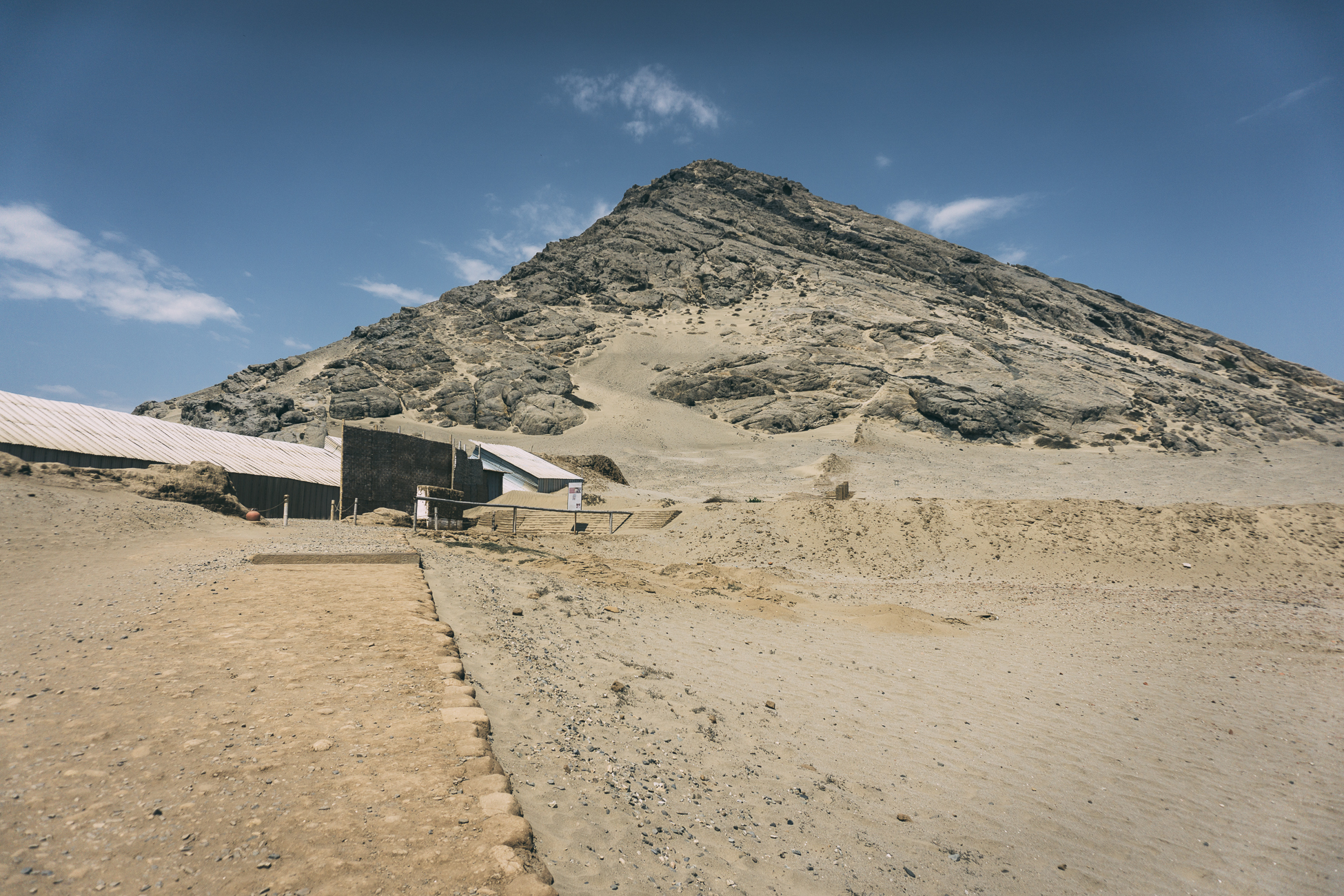 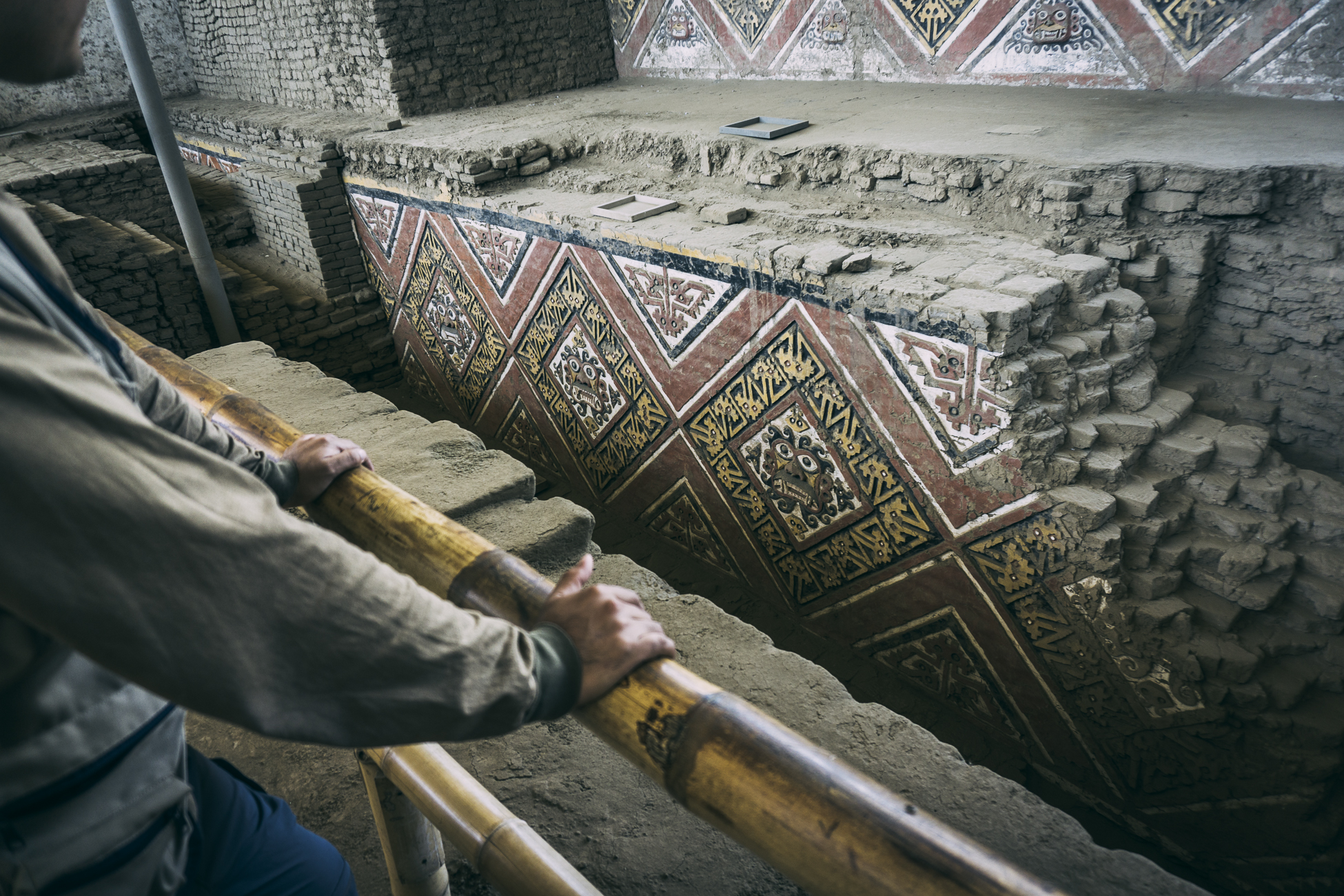 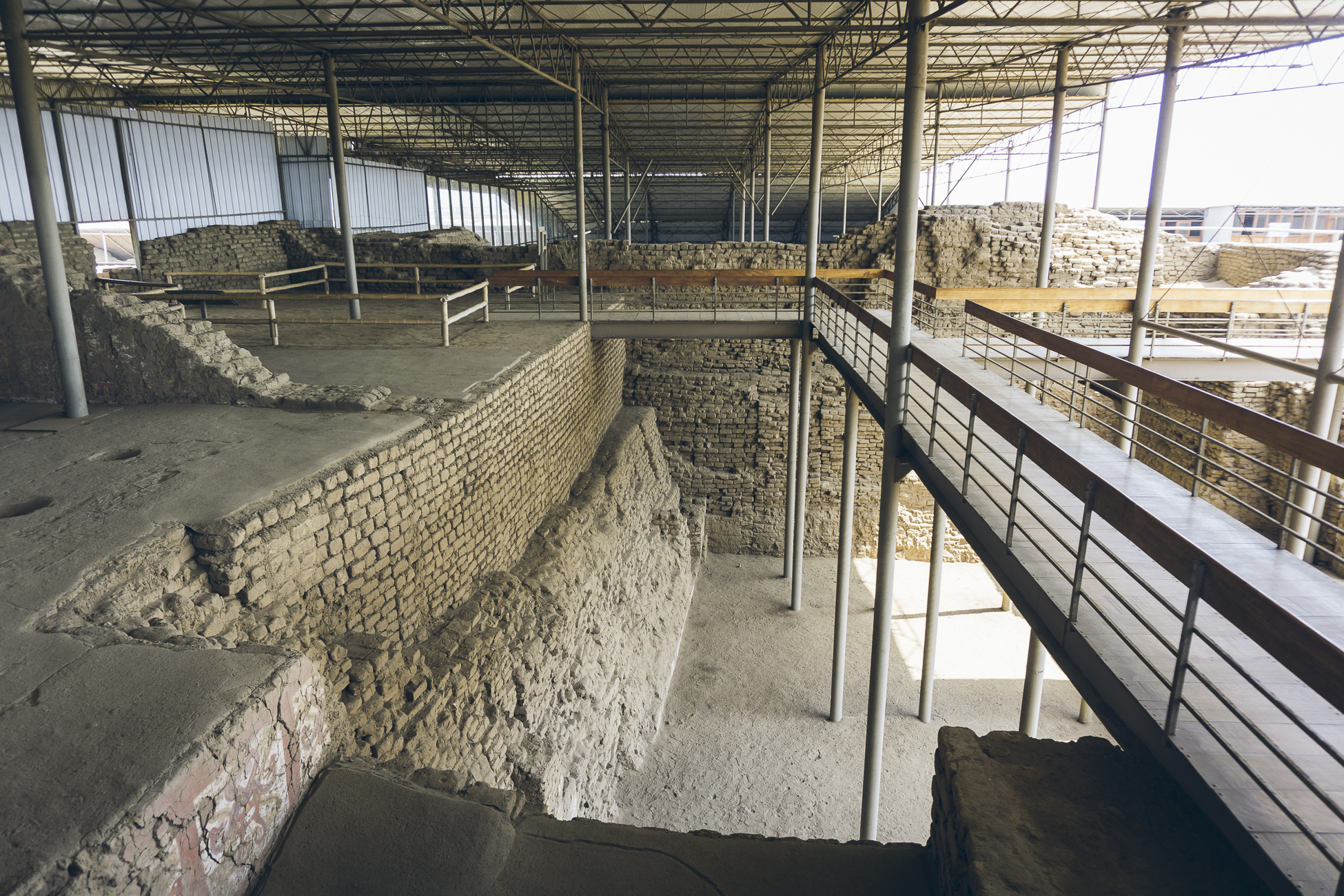 Human sacrifices were a frequent ritual among the Moche people.  The elite used a platform (depicted below) which archeologists believe was the main centre for the sacrifices.  The victims were killed, displayed, and then later swept into pits.  Roughly 70 victims have been found so far, and recent analysis of bones and teeth at the site reveal that they were captured warriors as well as non-elite locals.  A study of oxygen isotopes in the remains of the dead gives archeologists a clue as to whether the victims were local or came from afar.  Elites, on the other hand, were usually killed with the intention of appeasing the gods in religious rituals.  This National Geographic article outlines some other interesting facts and recent discoveries from this site.

This section of the temple was destroyed by looters.  You can see the hole in the wall where they entered below. 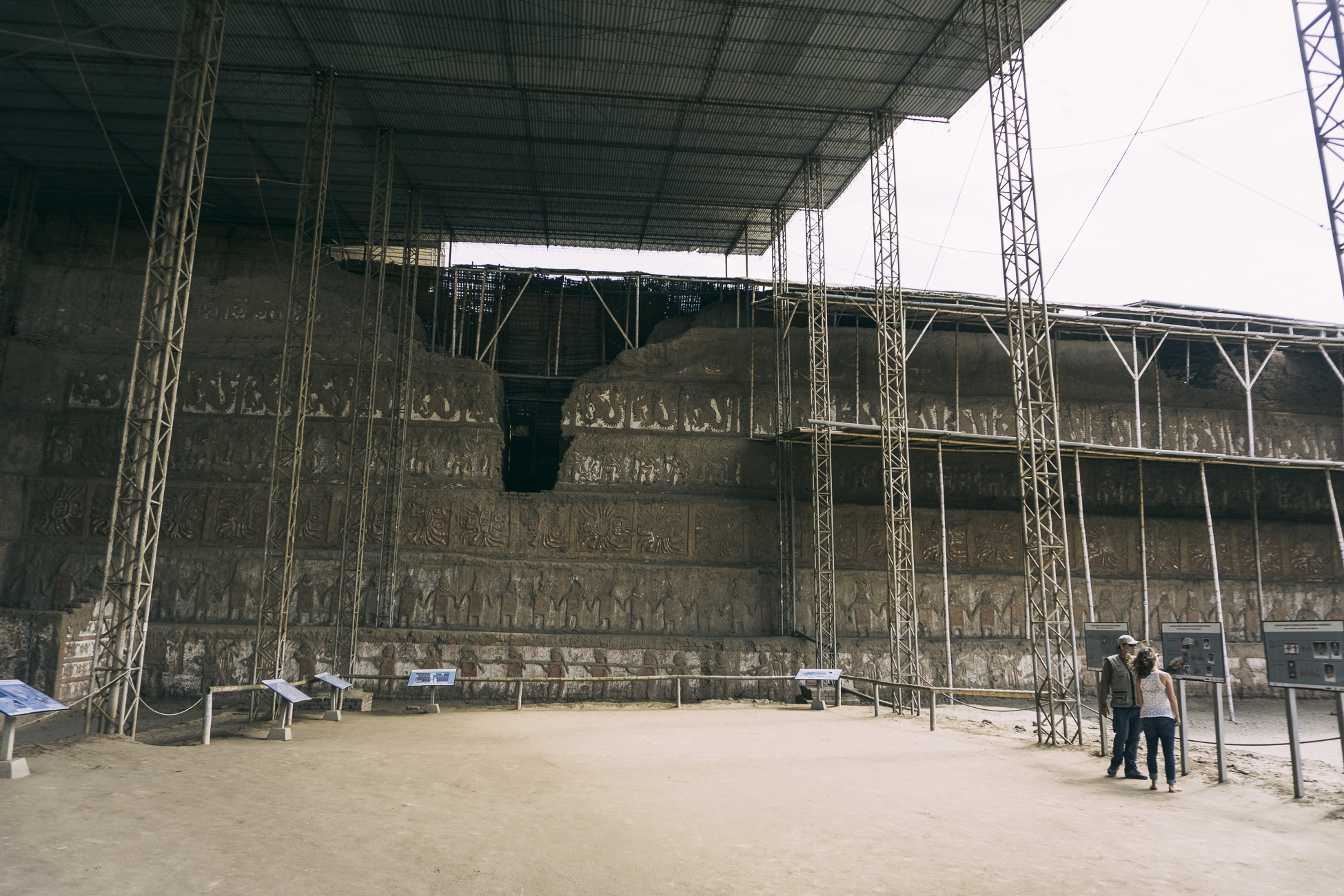 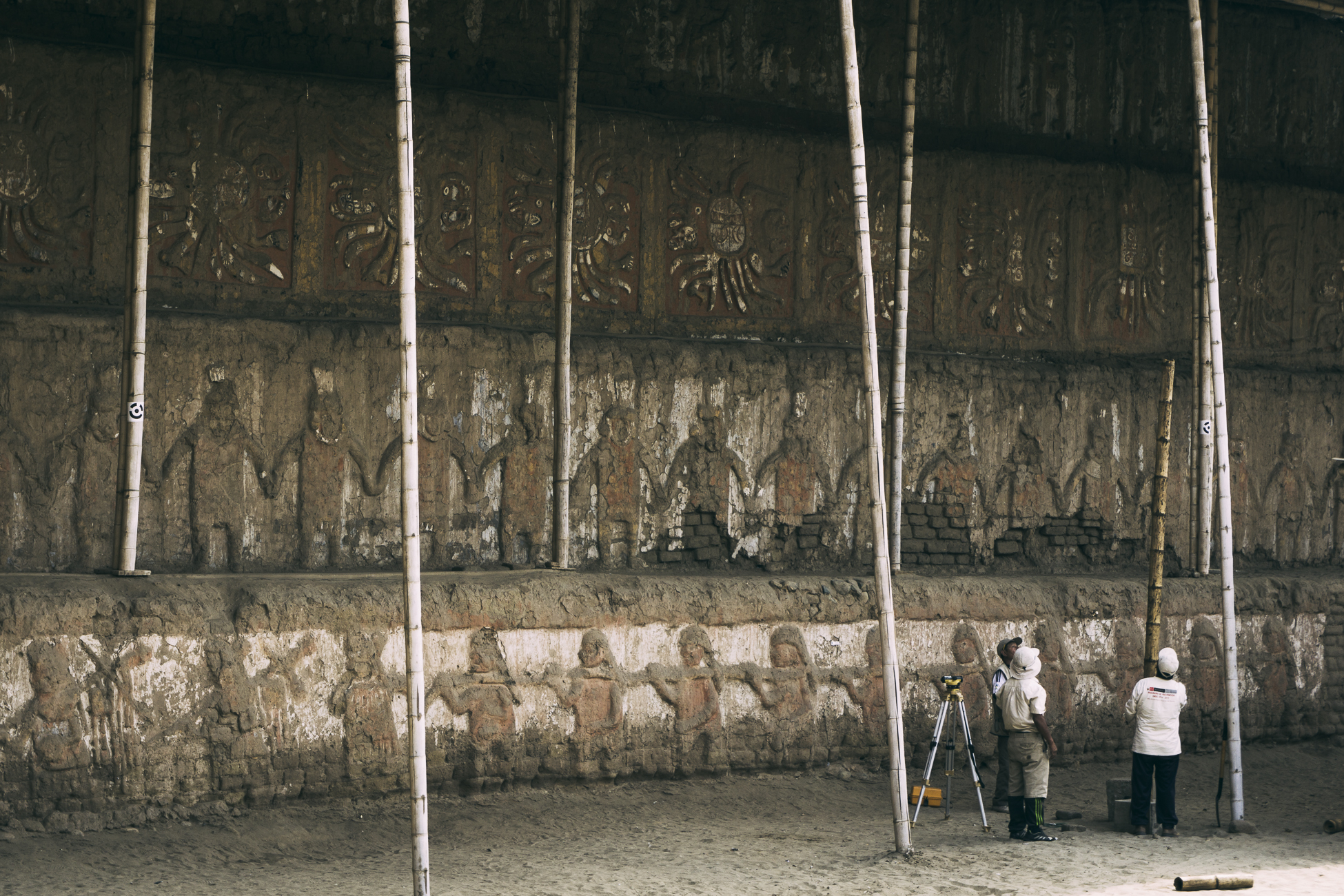 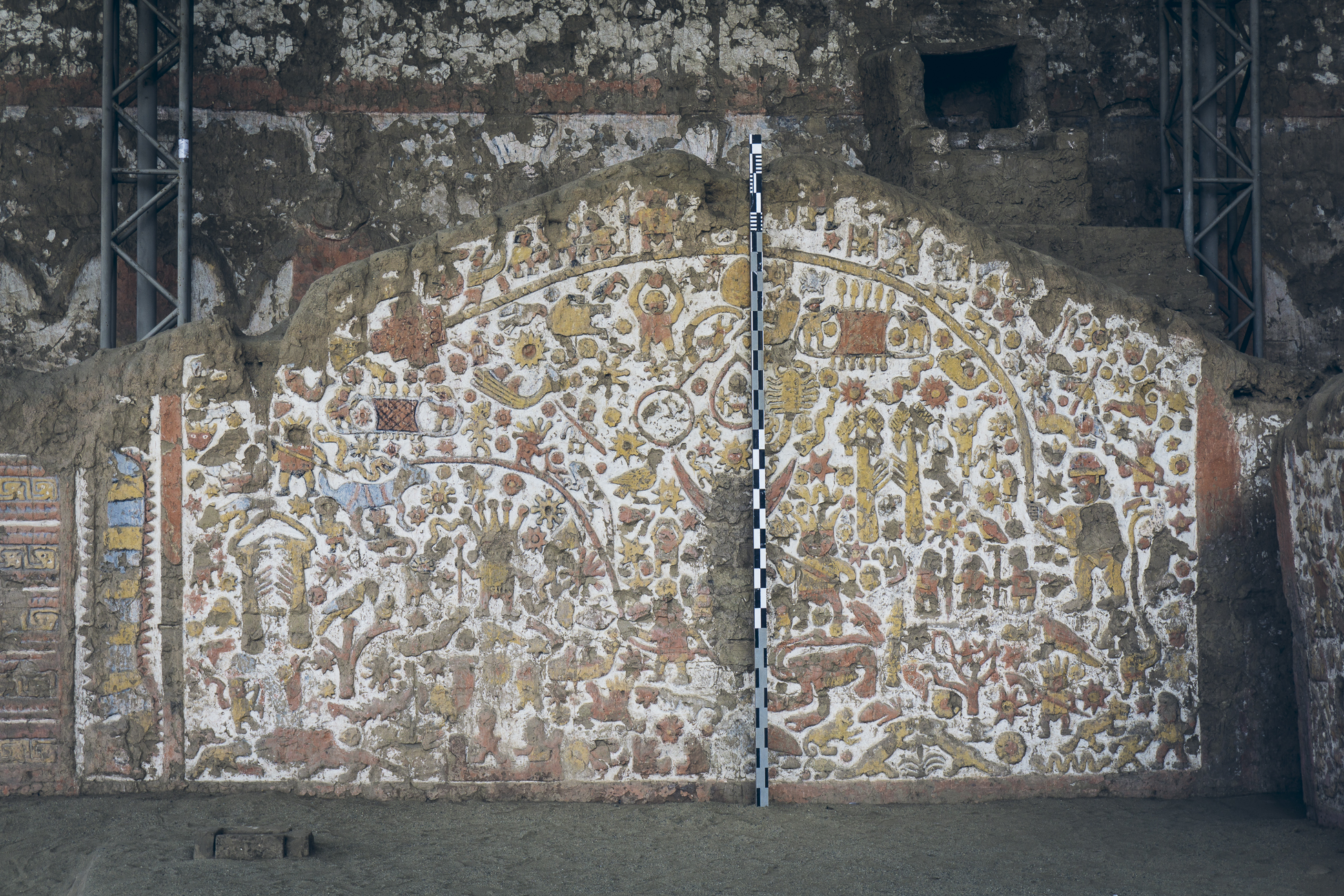 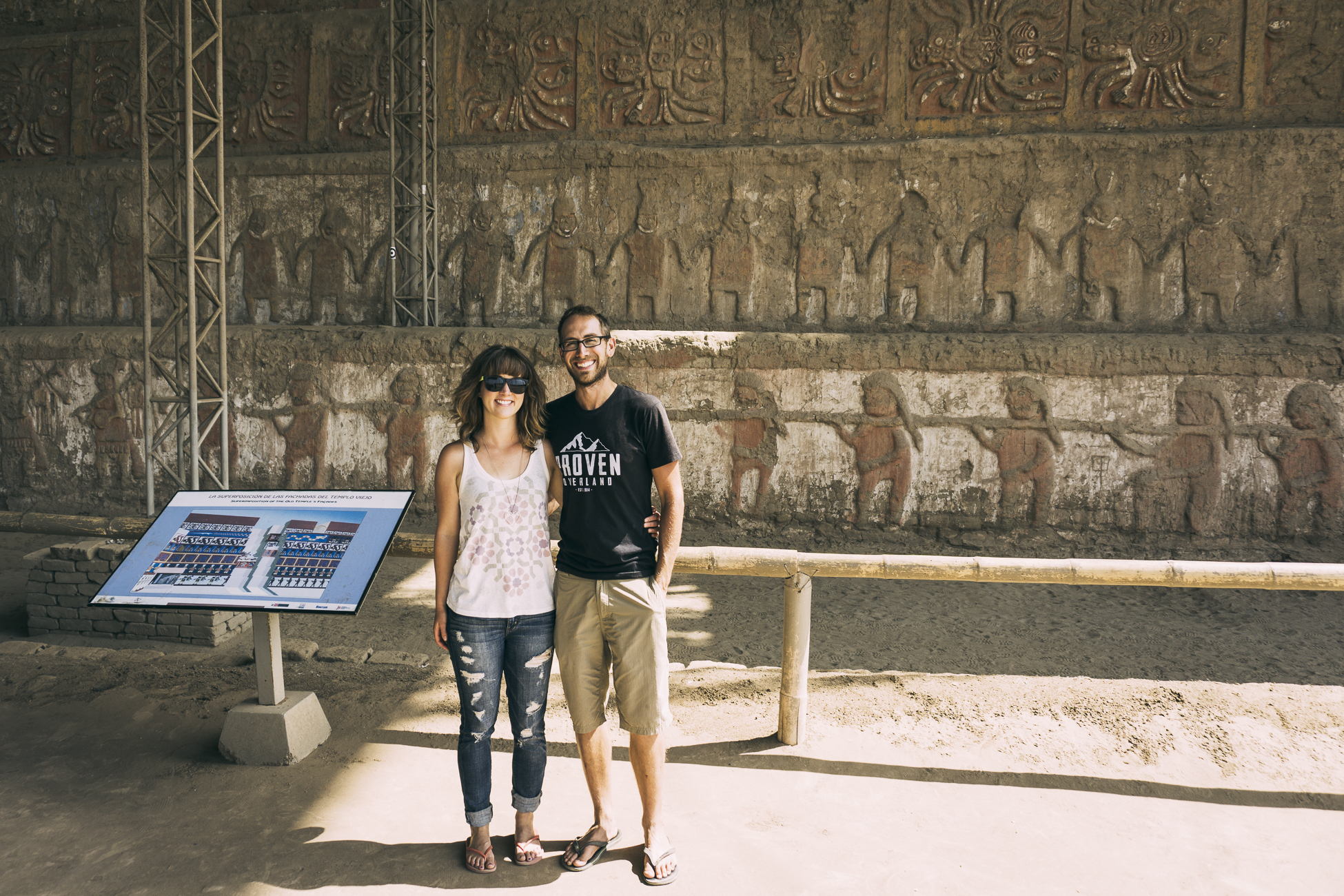 The trekking season in the Cordillera Blanca mountain range was on the verge of being over, so after a week on the coast we decided to put the pedal to the metal in Red and head towards the Andes.