The Road to Cusco, Peru

We started the road to Cusco, Peru by finally leaving the big city of Lima and heading to the Paracas National Reserve for some epic cliff-side ocean views and blue skies and wispy white clouds. Little Red never looked so good as far as we’re concerned! 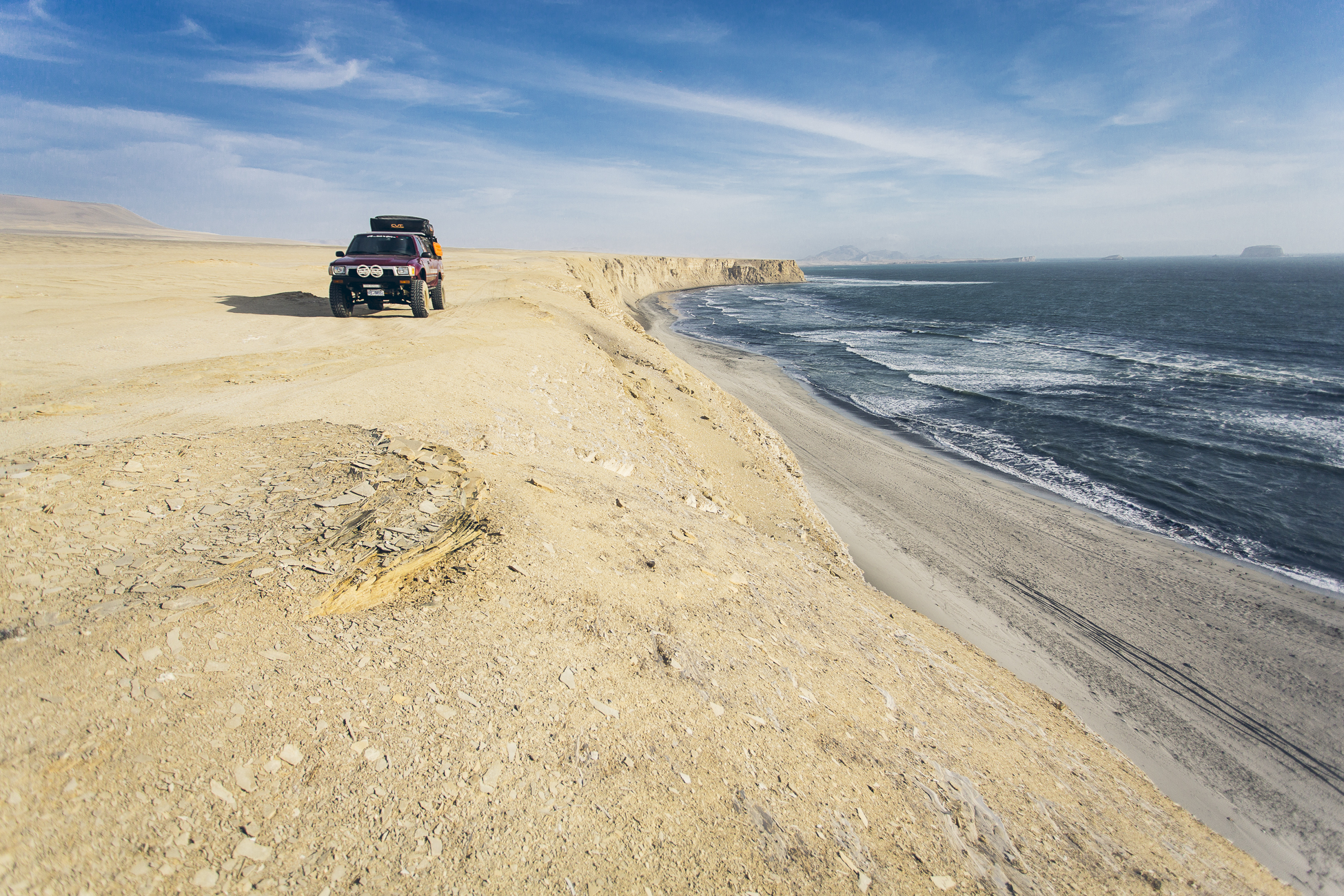 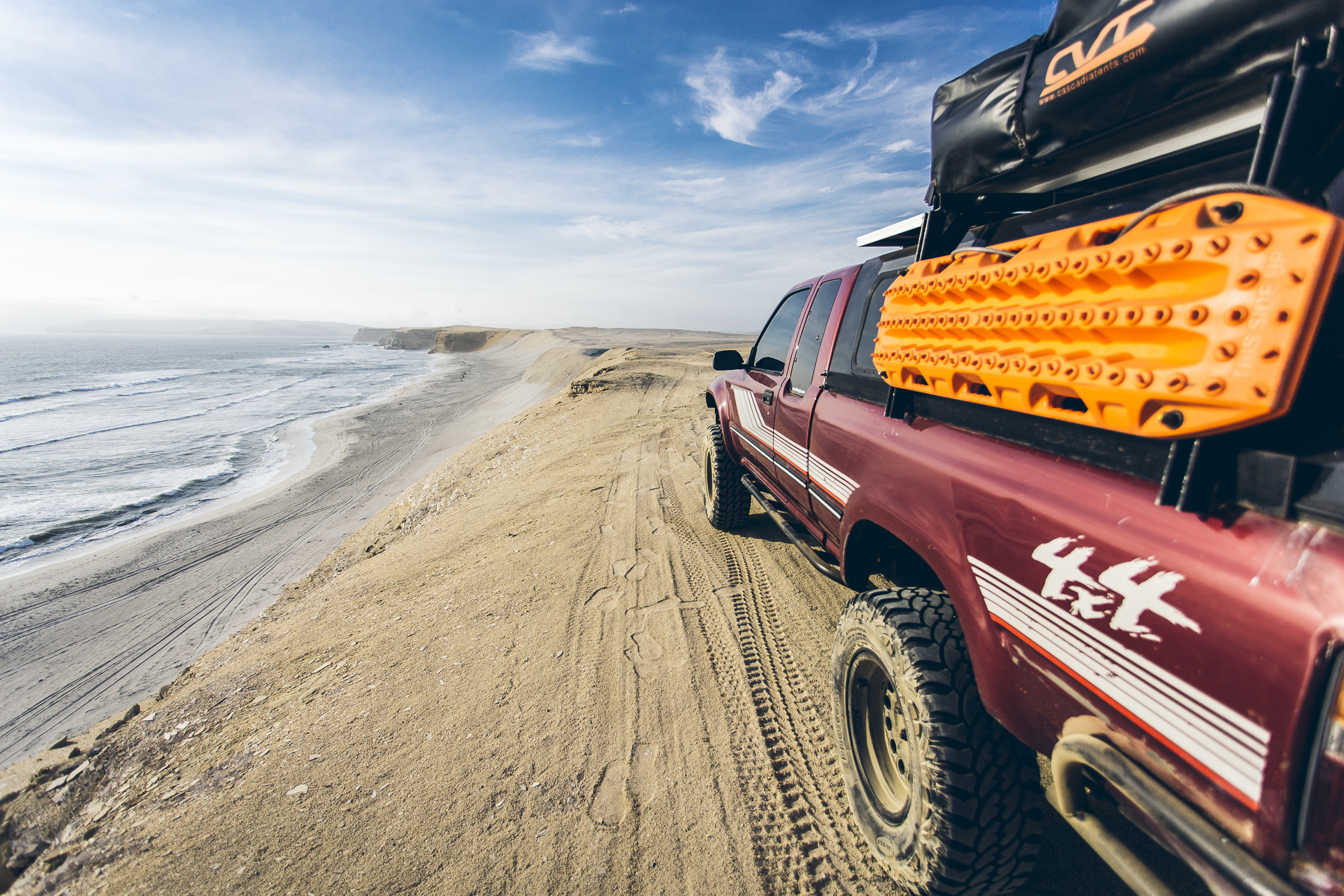 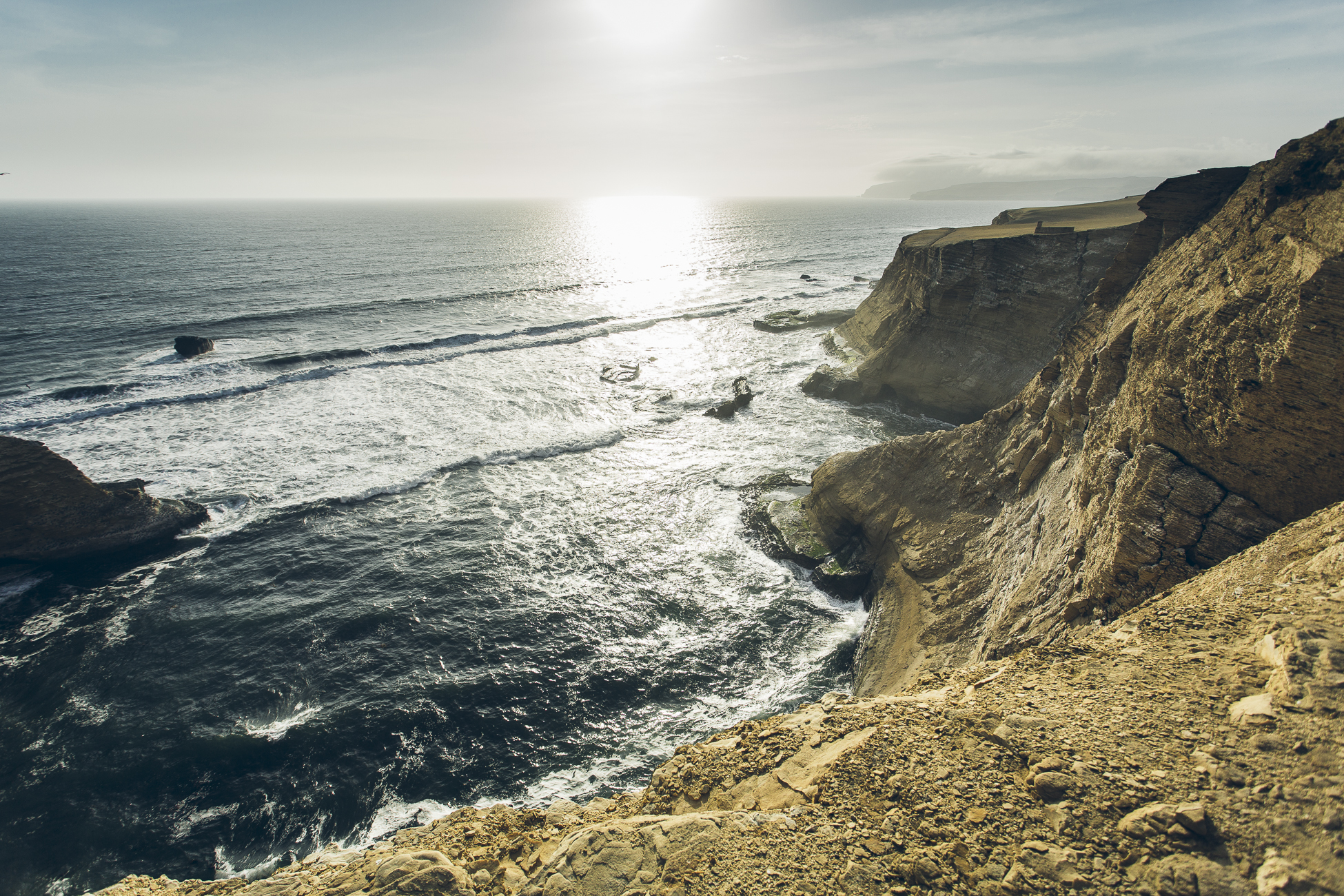 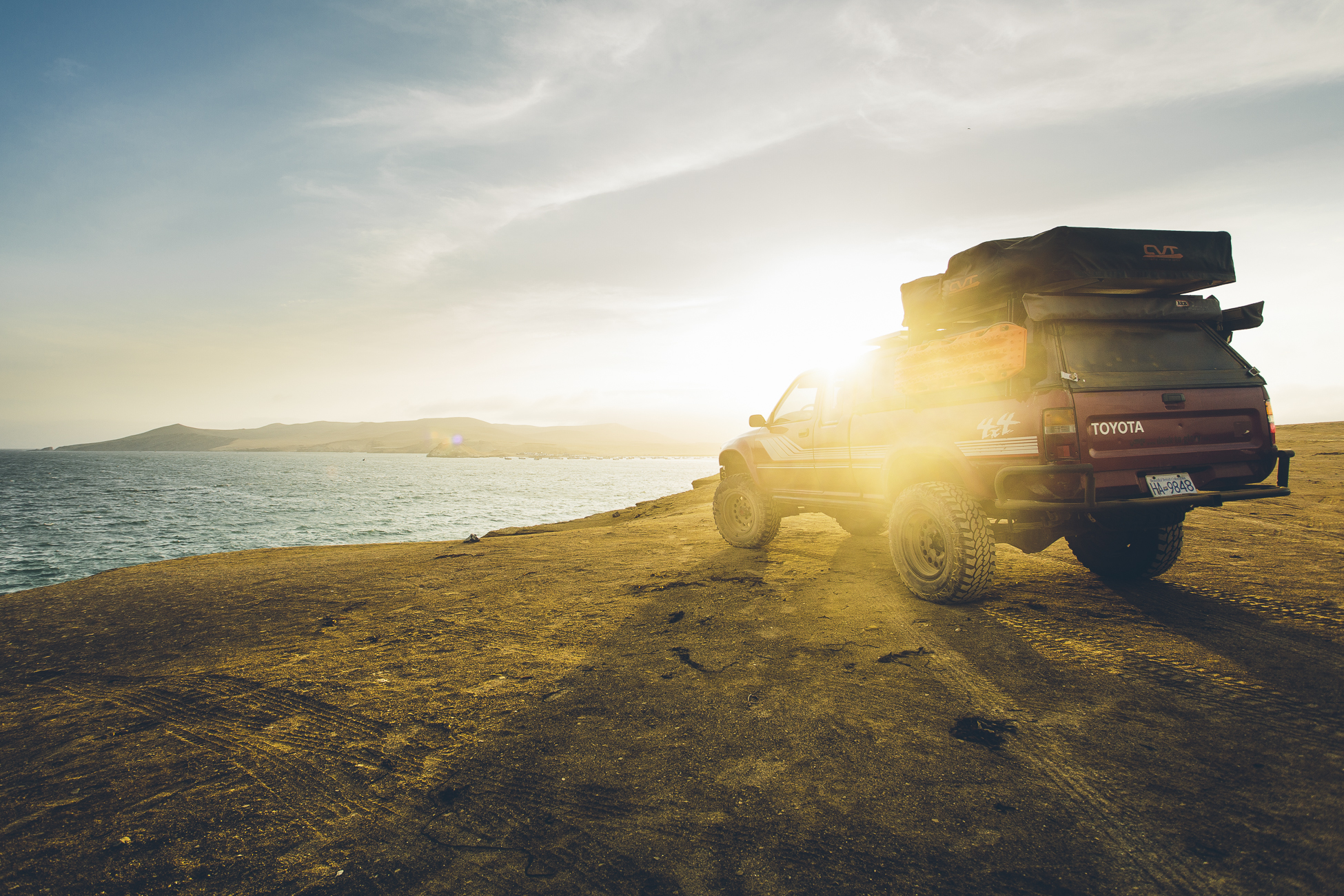 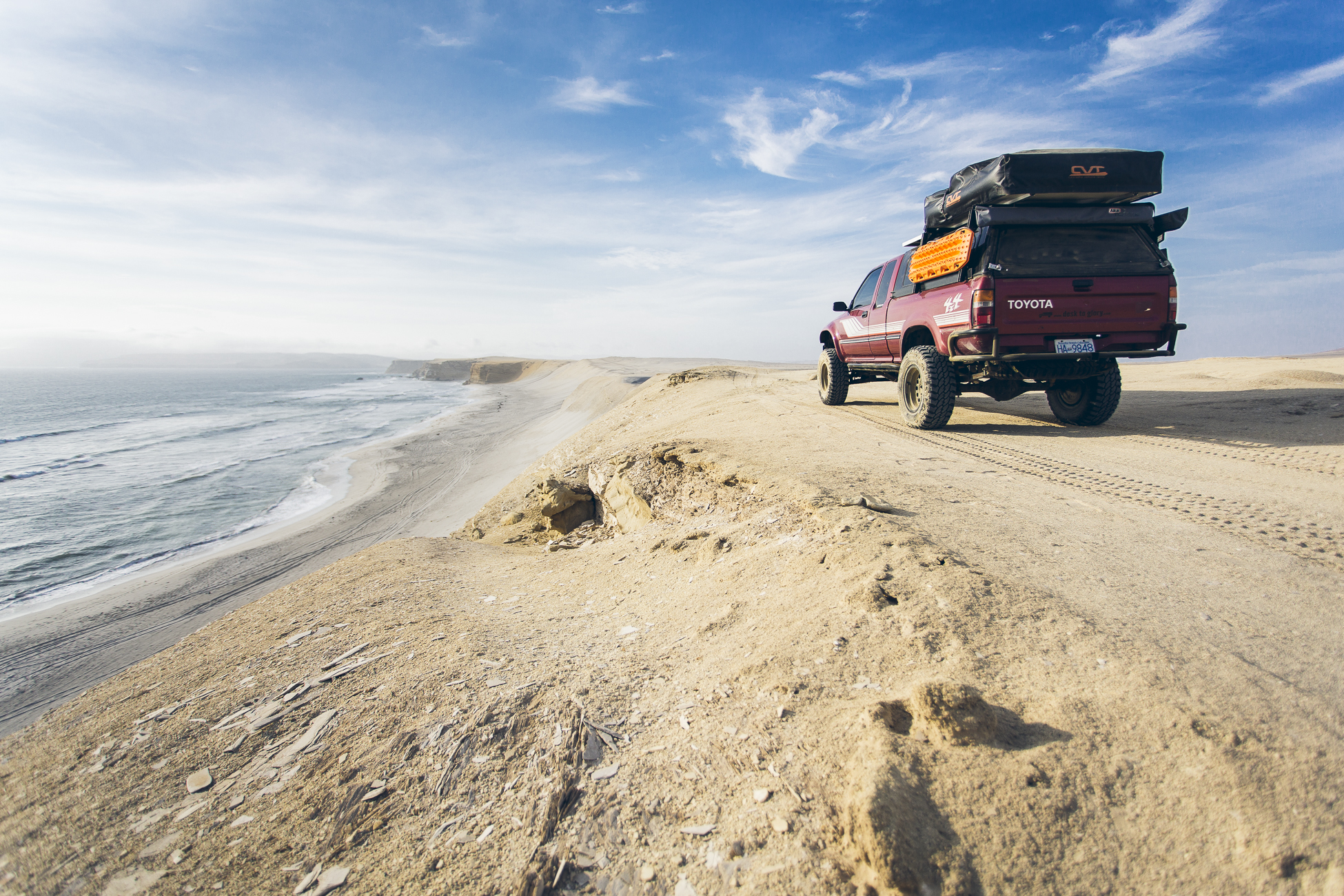 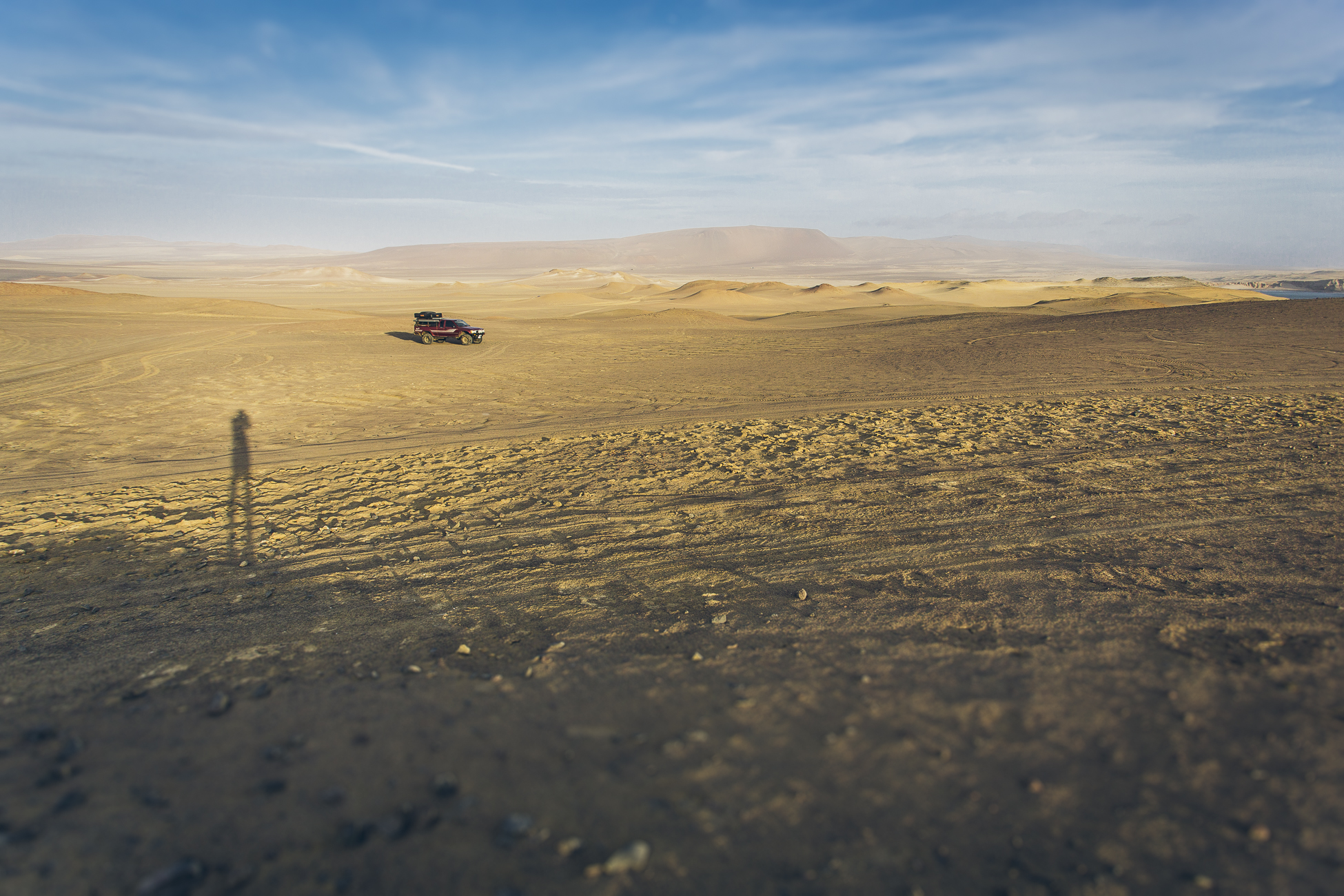 After Paracas we stopped briefly in the oasis town of Huacachina.  We watched cobbled-together dune buggies rip up steep inclines while we burned our feet in the scorching hot sand. 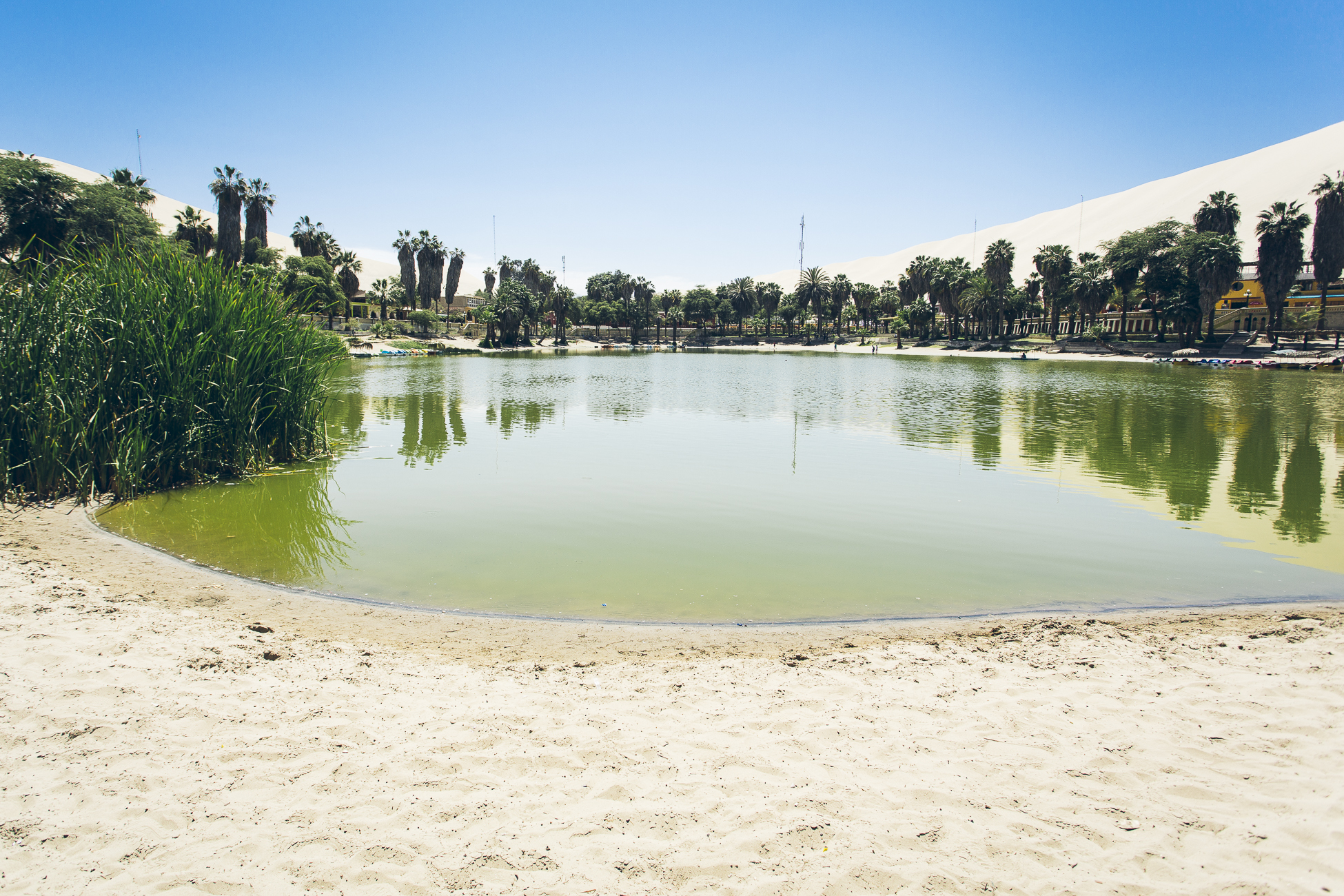 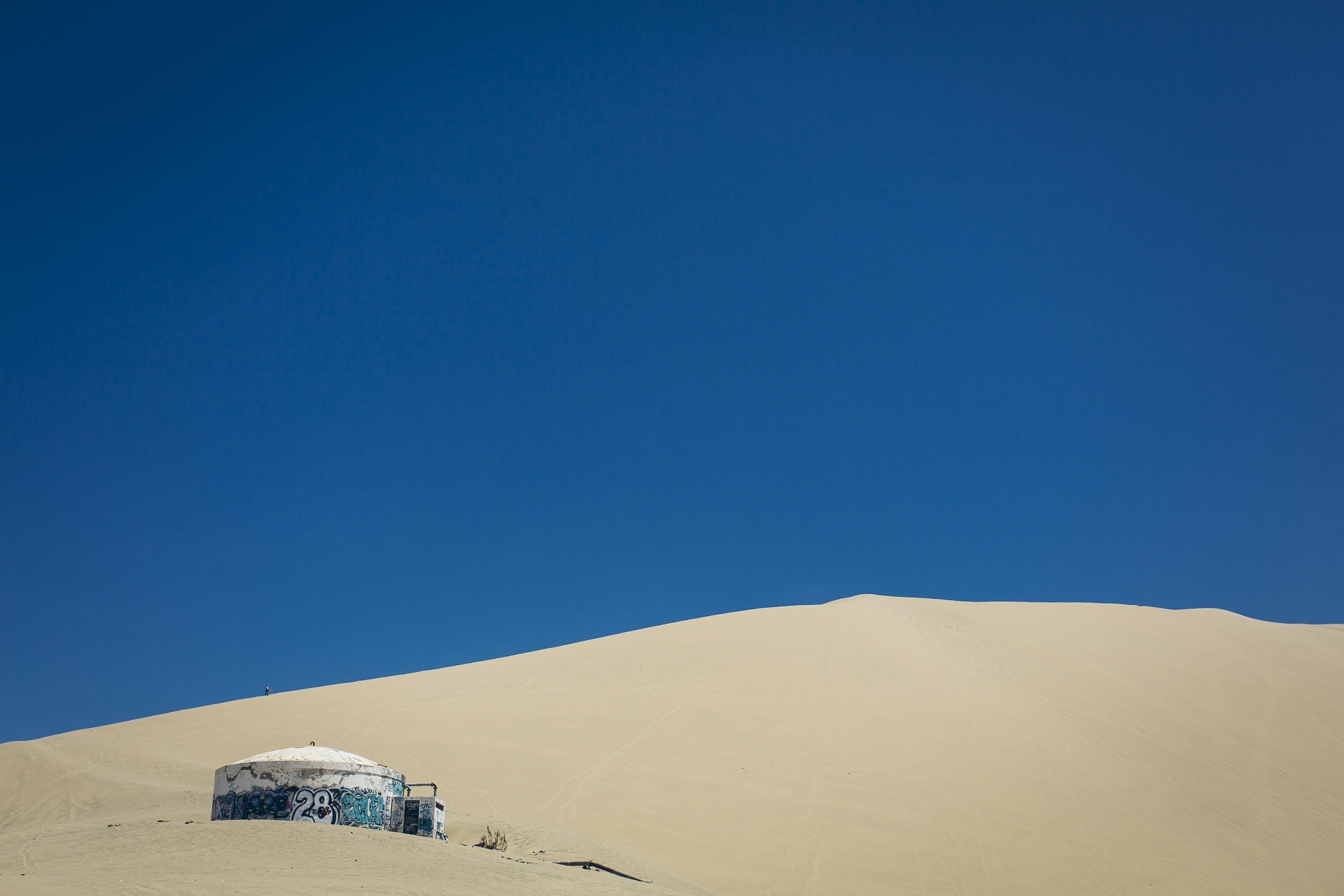 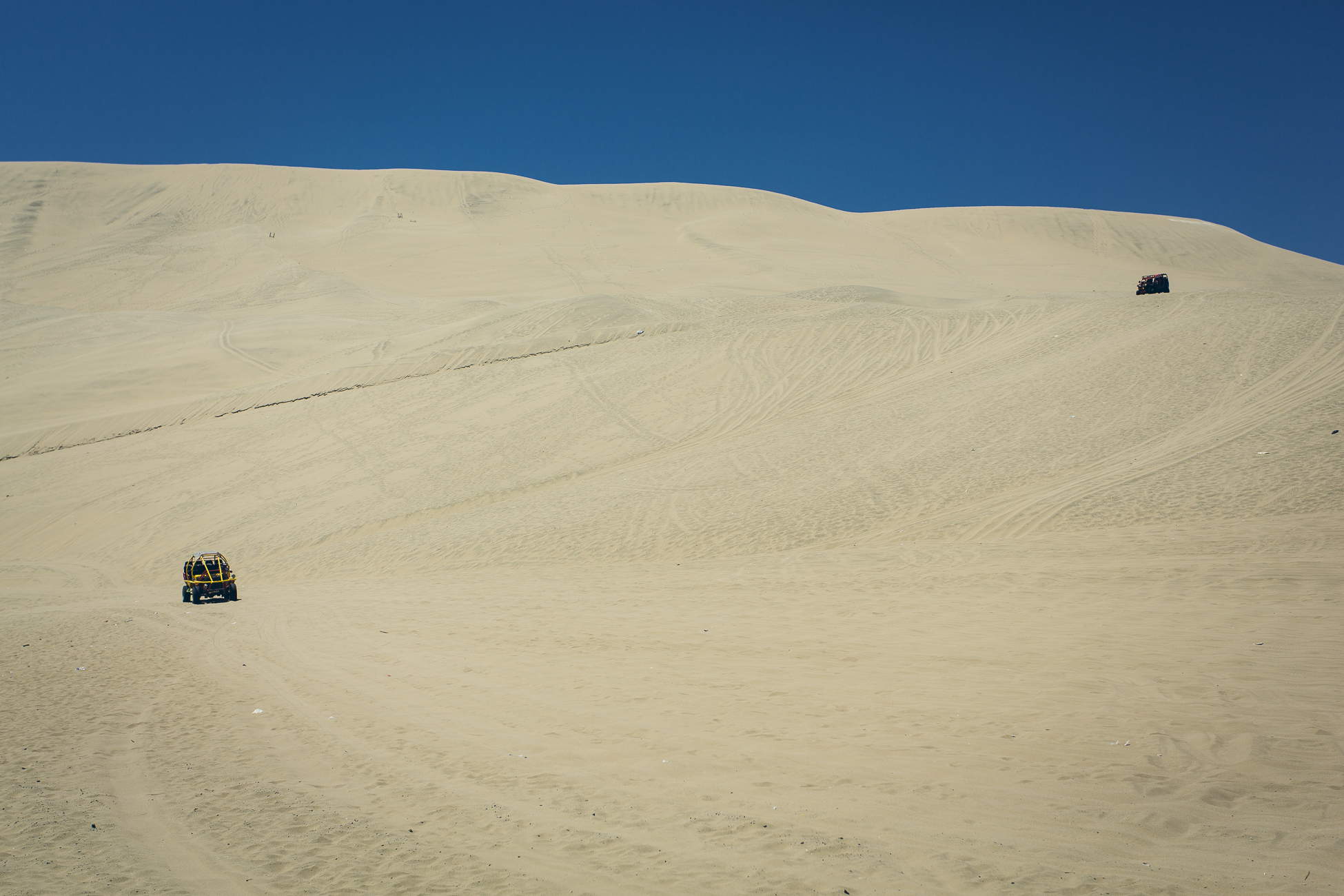 Continuing south through the Peruvian desert, we took a break to scout out the Nazca Lines.  We lined up (no pun intended) behind a big group of Peruvian tourists, bought our tickets, and continued up some rickety stairs for an optimal view of the ancient geoglyphs.

The Lines were declared a UNESCO World Heritage Site back in the 90’s, and have been quite well preserved due to the stable climate in the area.  Researchers say they were created by means of a big Art Attack, where the ancient Peruvians removed rocks revealing the lighter coloured ground beneath.  Animal motifs appear to be the most popular: hummingbird, monkey, spider, fish, sharks, orcas, lizards. Apparently the largest motif is 660 feet.  As is often the case, researchers do not know the purpose but believe they may be for religious reasons. 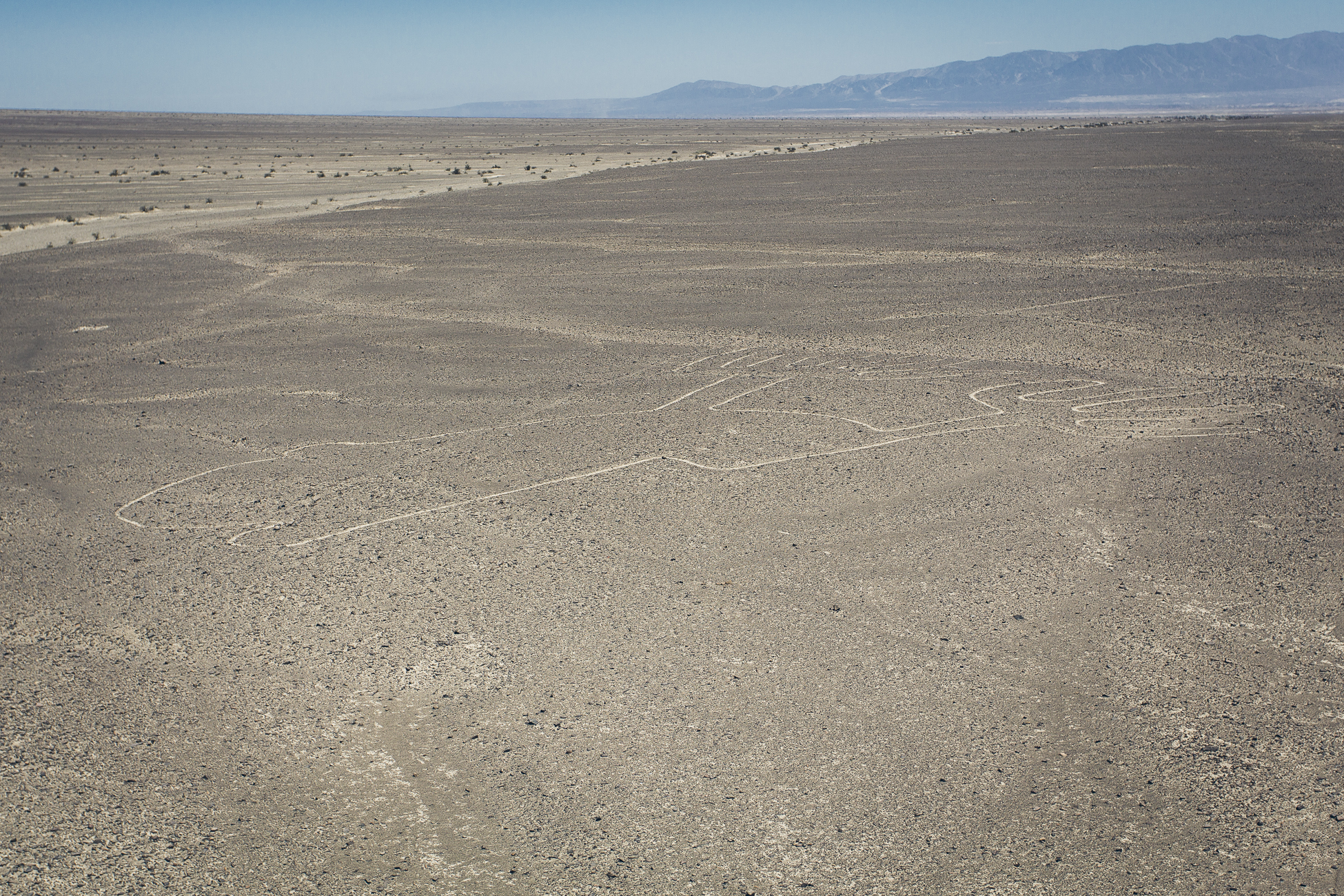 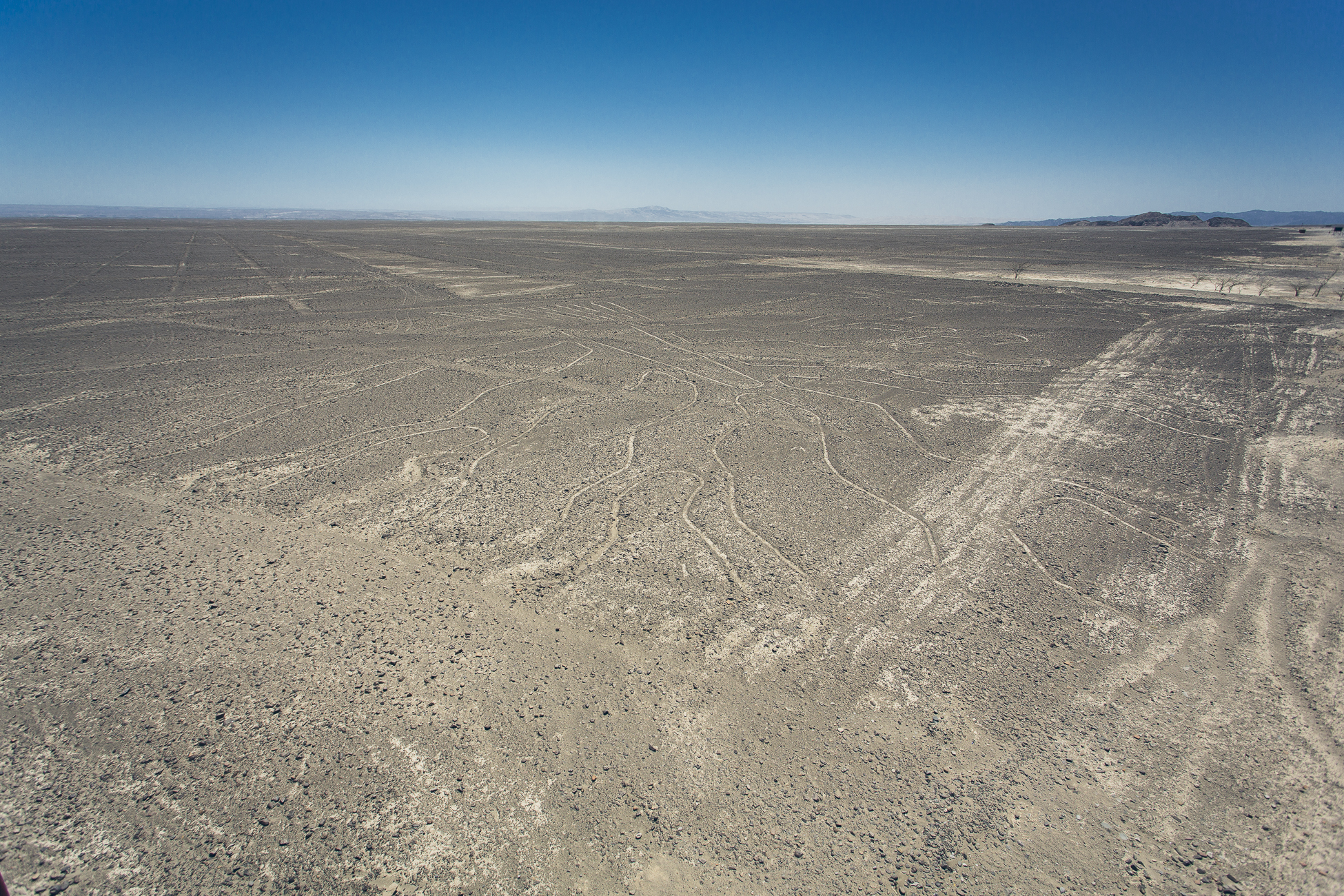 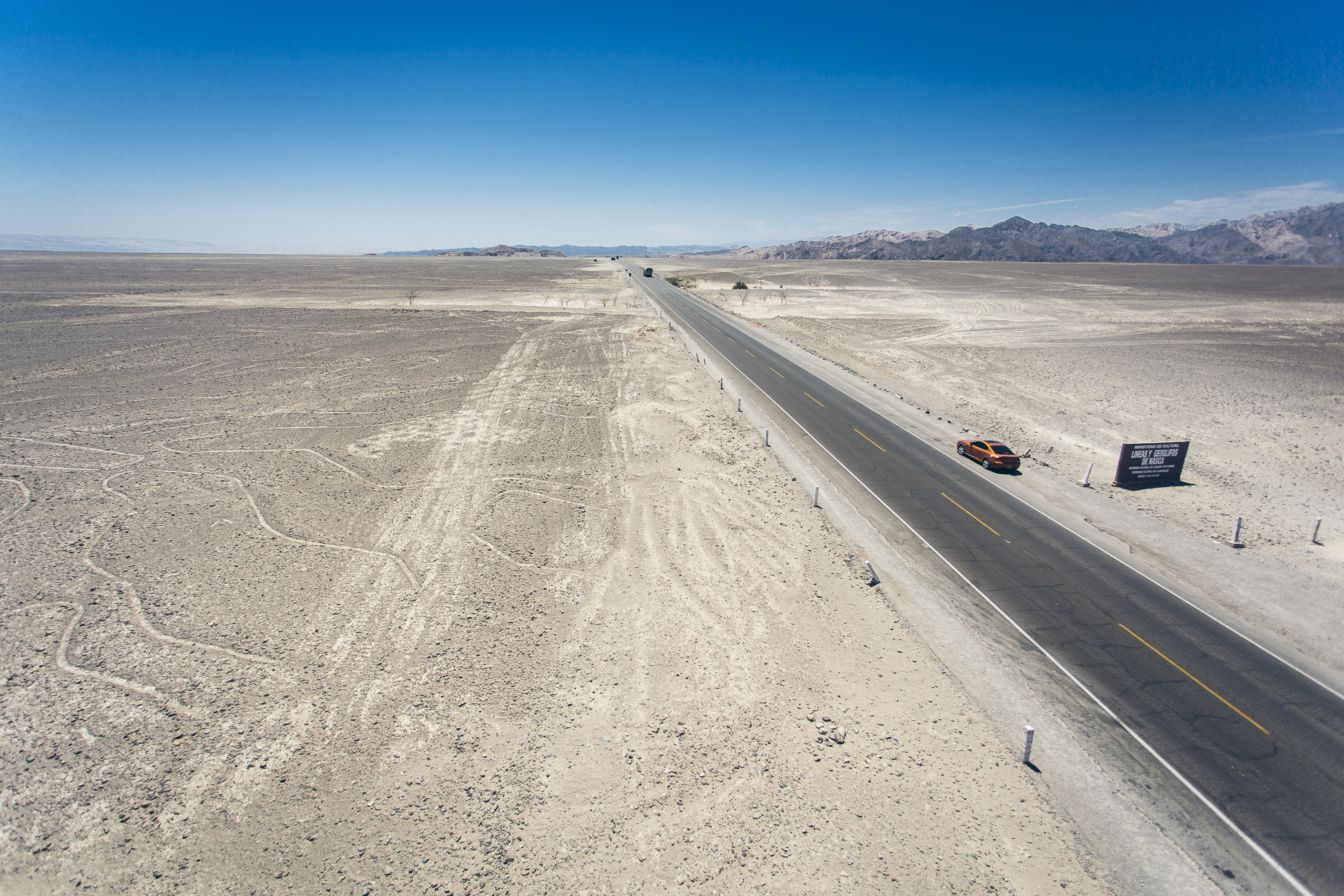 From Nazca we embarked on what was supposed to be a two-day 672 kilometre journey to Cusco.  We picked a nice little place to camp halfway through, drove for 8 hours, pulled in and got ready to set up.  After a full day’s drive we were beat, ready for a hot meal, and looking forward to crawling into the tent.  Especially as the rain storm started in on us.

We escaped the falling rain and wandered into the reception area, as we were camping in a parking lot of a hotel, and saw a big tour group looking concerned while their guide was making a speech of some sort.  This looked important so we loitered around and eavesdropped to see what the situation was.

The tour guide explained that early the next morning all roads into and out of Cusco, including the train to Machu Picchu and all transportation, would be shut down for several days due to protests.  The group discussed options while Richard and I looked at each other with raised eyebrows. We didn’t want to be stuck in randomland for several days.  After a quick spaghetti dinner and two cups of coffee for Richard (one in a to-go cup!), we set off for Cusco.  Thankfully the road was excellent: well-paved, a ton of lights and reflectors lining the highway.  Plus, the rain cleared out only 10 minutes into the drive.  We cranked up our Hella lights and tucked in for the long, dark drive.

Things were actually going fine until: 1. we got lost in Abancay when our GPS app stopped working on my ancient iPhone-4 and we spent almost an hour in traffic navigating one-way roads; and 2. we made the dumb decision to check out a campground on the way for a “quick night’s sleep.”  This resulted in a half-hour drive down a steep tight dirt road in the dark, getting lost, and having to back up said dirt road because there wasn’t enough room to turn around.  I walked behind the truck while directing Richard.  At the top of the hill we saw the gate which we missed upon entering, which was closed [frustrated fist pump!].

By the time we arrived in Cusco it was around 2:00 a.m. and the town was deserted.  This ended up working to our benefit as the city traffic is notoriously bad during the daytime.  We popped the tent and camped outside the gate of the campground, breathing a sigh of relief that we had arrived safe and sound.

Here is a bit of background on the events leading up to the protest.  Several weeks before we arrived in Cusco, Peru enacted a law (“Decree 1188”) offering states the option to employ private companies to provide tourist services at cultural heritage sites. These sites would remain property of the state, but services such as cleaning, security, restaurants and museums could be outsourced to private companies for a period of no more than ten years. Peru’s cultural minister claimed that the government lacked sufficient resources to properly care for the country’s 19,000 (!!) archeological sites. The intent of Decree 1188, said its supporters, was to enhance the value of each archeological site and the surrounding areas. World Heritage Sites such as Machu Picchu, Chavin de Huantar and Chan Chan would be exempt from this law.

The state government of Cusco strongly disagreed with the new law, proposed a bill to repeal it, and mobilized a two-day protest in the city of Cusco. Cusco’s governor provided a statement: “The law is a serious attack on the cultural legacy of a great civilization that is the hallmark of our national identity, recognized and admired worldwide.” The governor argued that privatization would put money into the pockets of millionaires rather than those of the Peruvian people.

Apparently the protests were filled with misinformation, people believing that Cusco’s Historic Centre and Machu Picchu would be privatized (not possible under their World Heritage designation). I couldn’t find any information online about what the local people believed the law meant, so this perspective might be skewed. 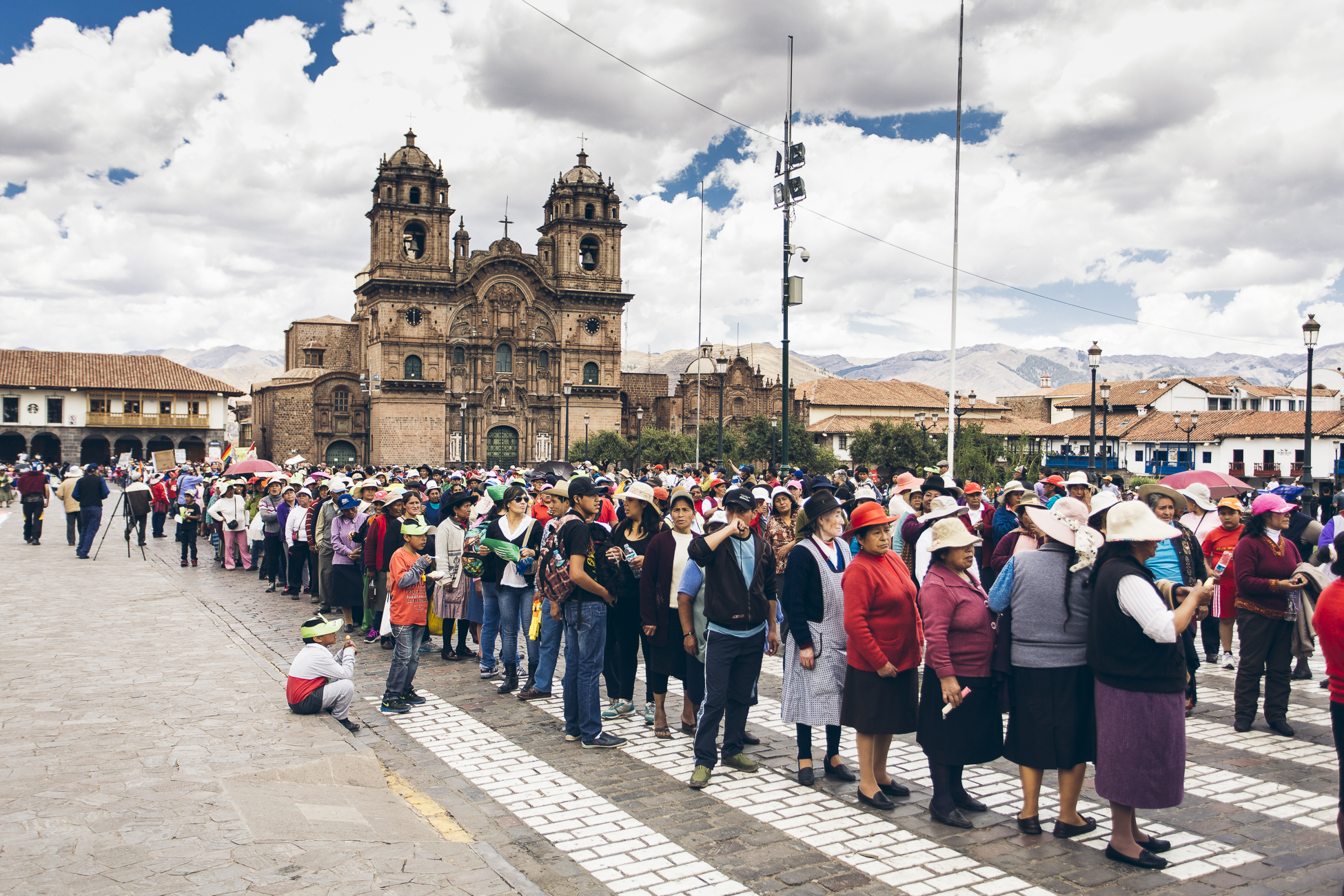 The two day protest meant that all transportation and most services were shut down while we were there– the train to Machu Picchu, all roads leading in and out of Cusco, all busses, taxis and moto-taxis, and a large majority of the shops and markets. For two days swarms of Peruvians marched the streets with large signs, microphones, banners, and rainbow colored pins (for a donation of course!). Energy was high. We heard of locals getting pulled out of the few taxis that were running, saw large rocks blocking the road near our campground, and witnessed garbage being thrown at a local man selling food and beverages at the Plaza del Armas. Otherwise, considering the amount of passionate people marching the streets, the protest was relatively peaceful. 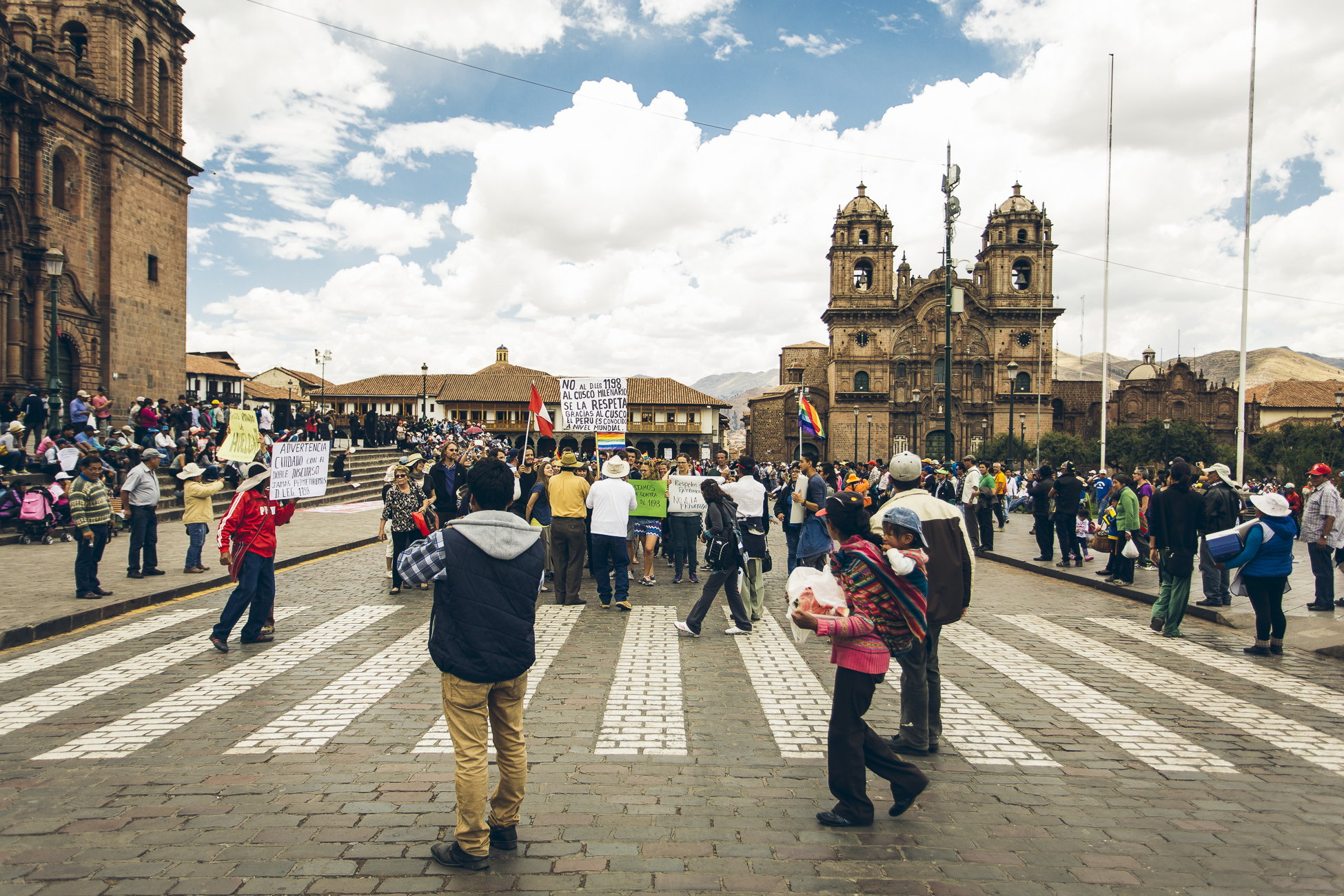 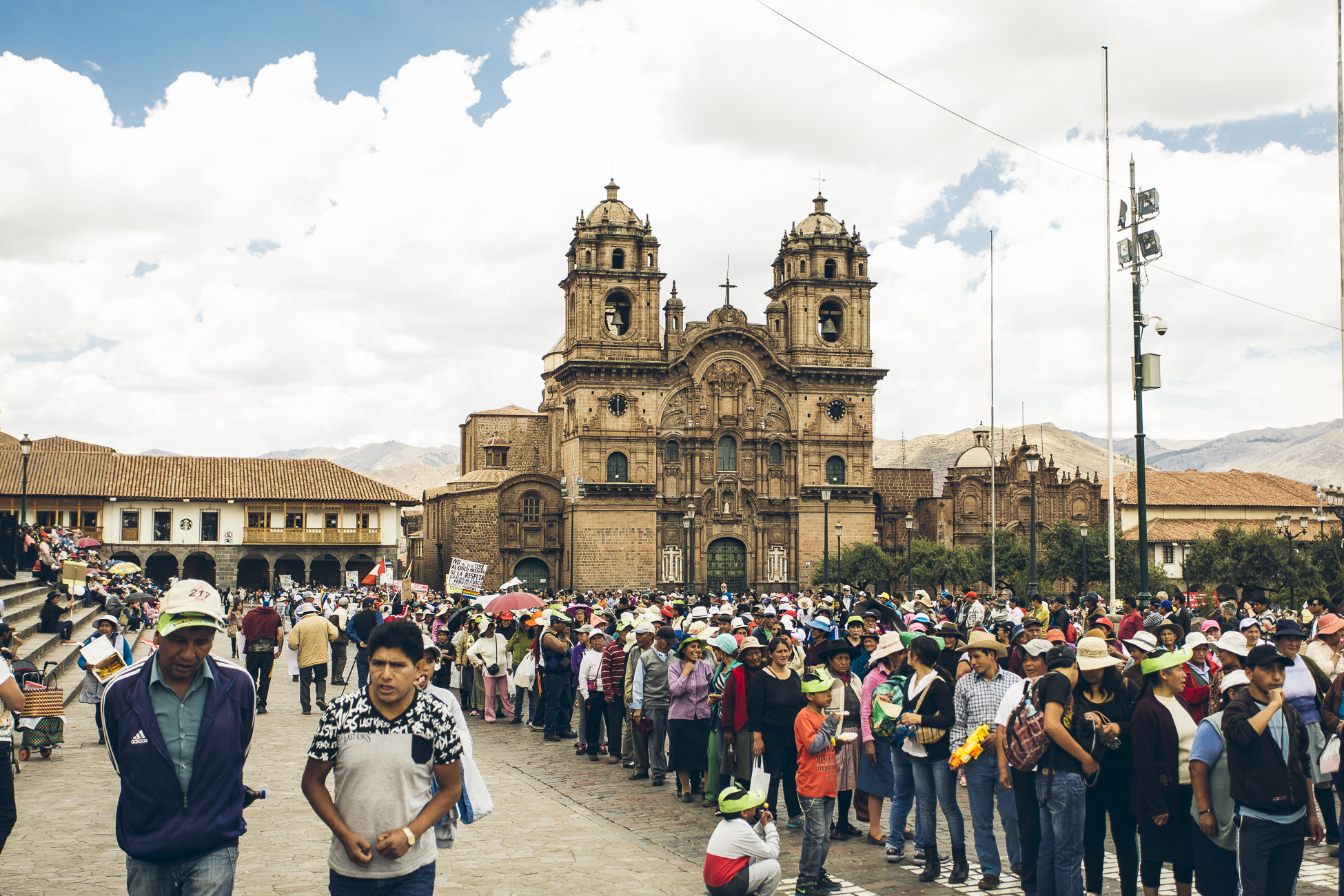 The law was quickly repealed following the protest. Peruvian President Ollanta Humala vetoed the repeal and sent the issue back to Congress for re-consideration. Currently the law continues to be contentious and Cusco has threatened to protest again if the law is once again enacted.

What do you do when a government states it doesn’t have enough resources to protect a country’s large number of prized historical and cultural sites? Is this up to the government to better manage funds? Or would the privatization of specific tourist services help bring in additional revenue and protection much needed by these ancient sites? As a Canadian tourist and non-Peruvian resident, I doubt I will ever know the ins and outs of these kinds of issues. As tourists just passing through, we really just observe what we can and get a general sense of a place. Therein lies one of the many beauties of traveling: you exist in a location and time where you become aware that these issues even exist in the first place.

Cusco was charming, with its brick edifaced buildings and little trinket shops lining the cobblestone streets.  It was apparent that the city thrives and survives on tourism.  We saw Starbucks and McDonalds, high-end restaurants, art dealers, and tourists wearing Panama Hats and holding selfie sticks.  Traditionally dressed women jumped on any opportunity to throw costumed lambs in our unexpecting arms in exchange for a paid photo-op. 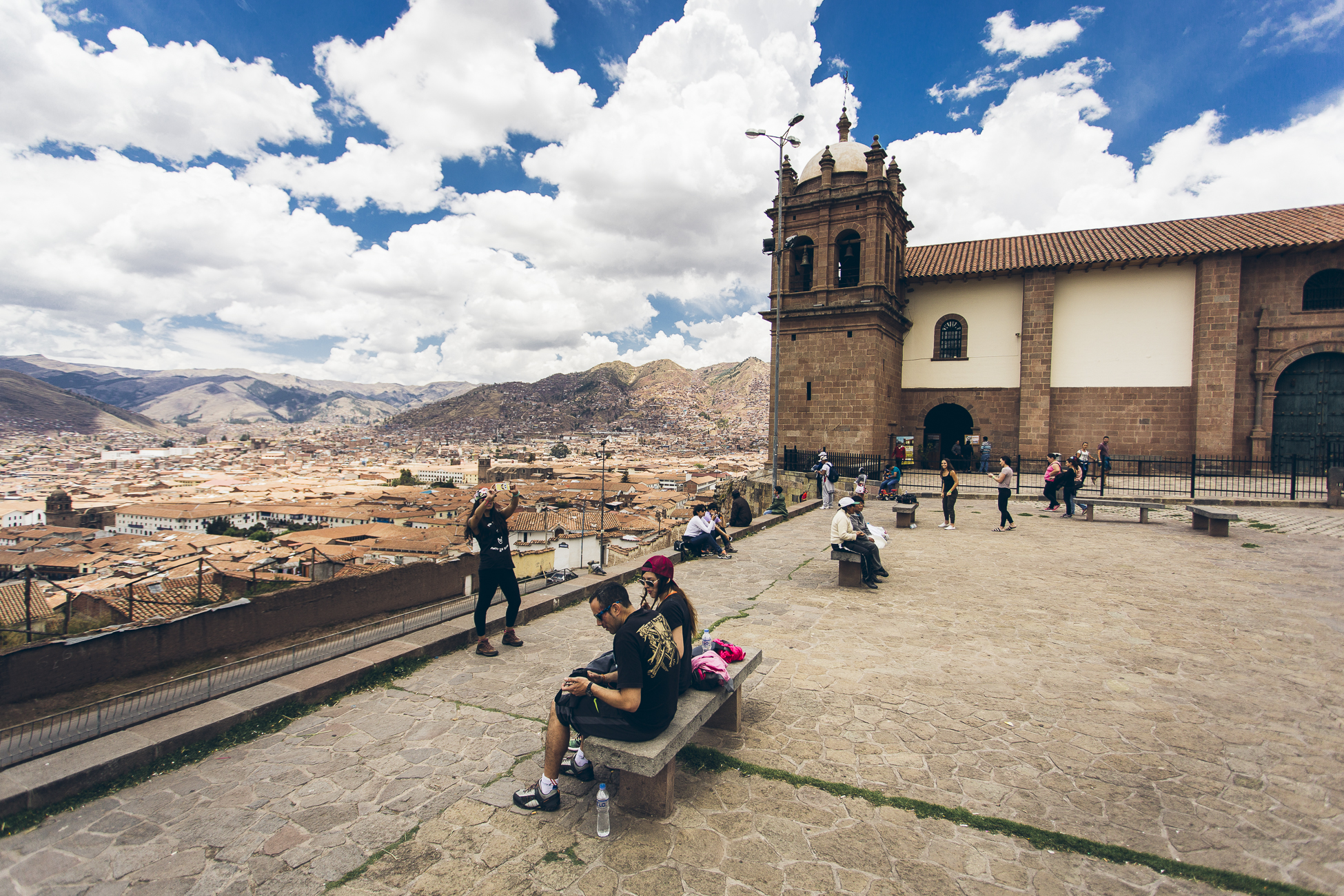 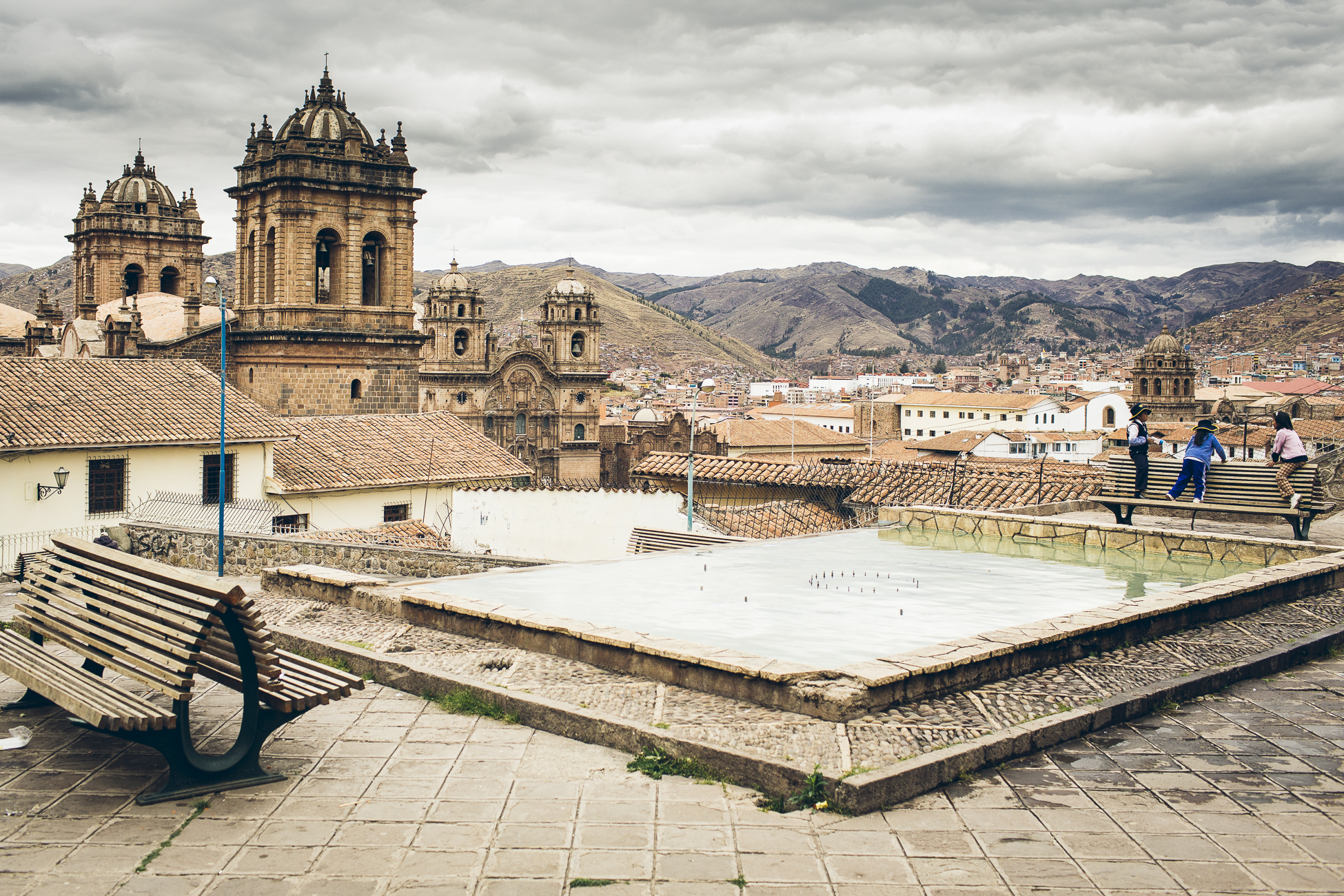 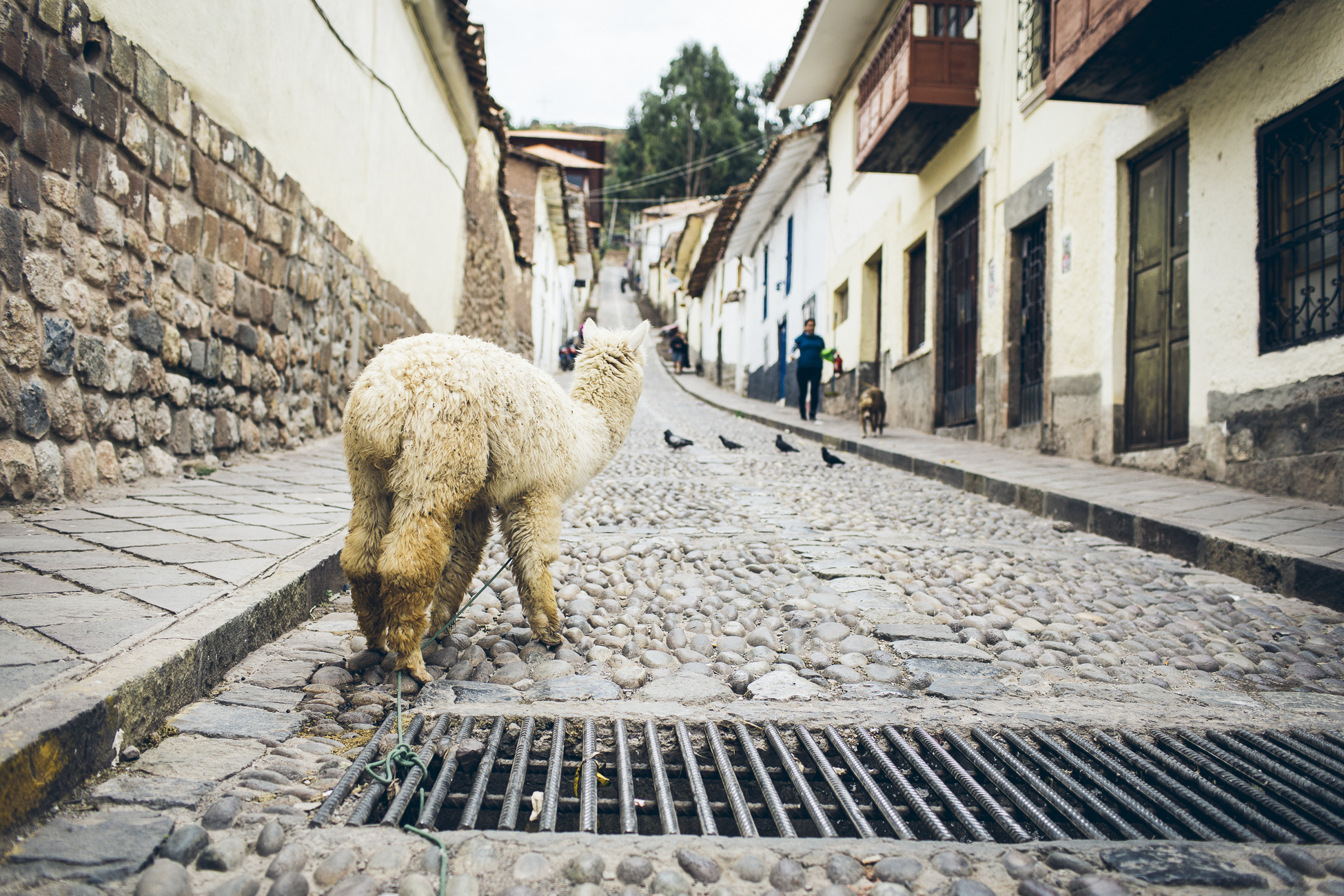 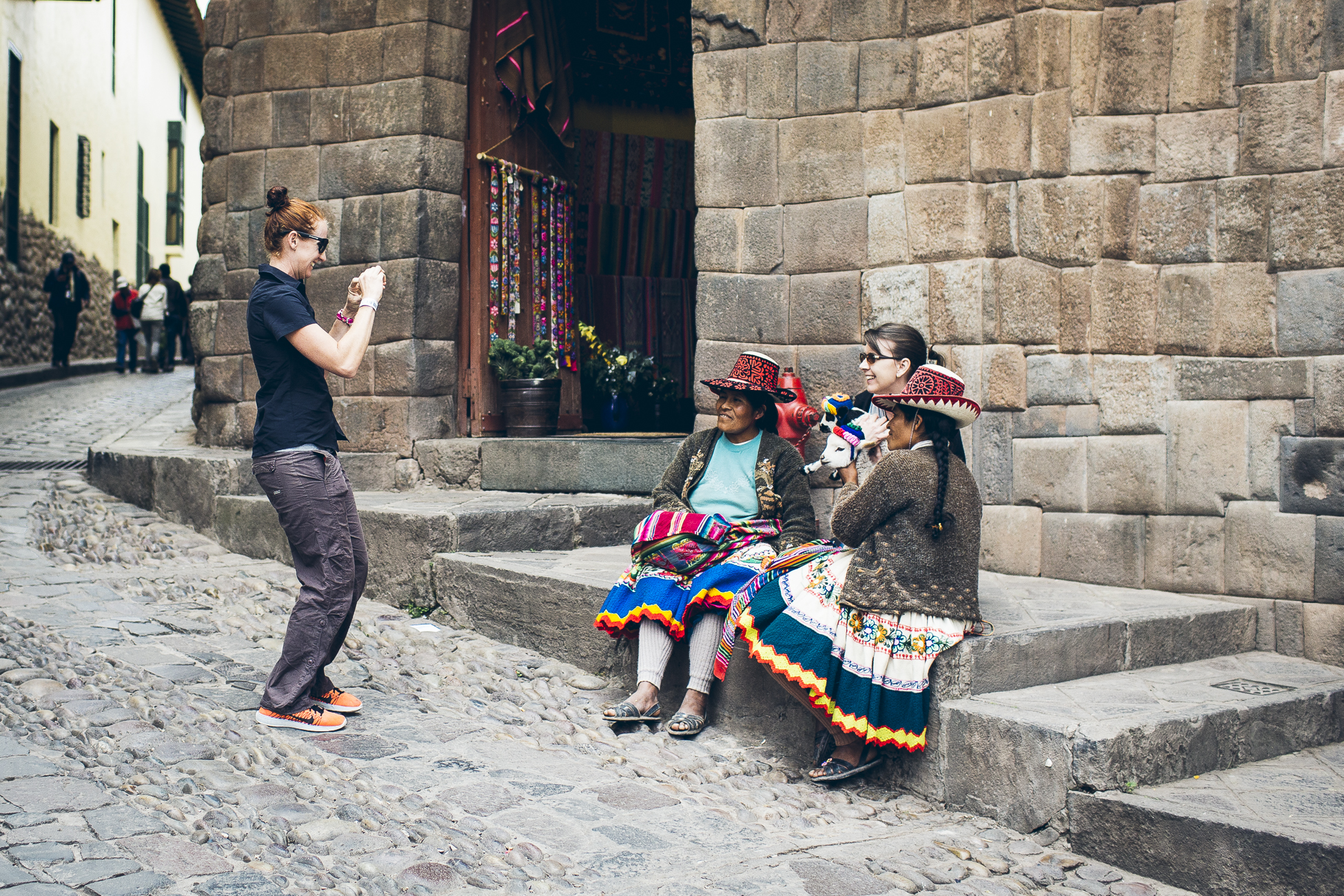 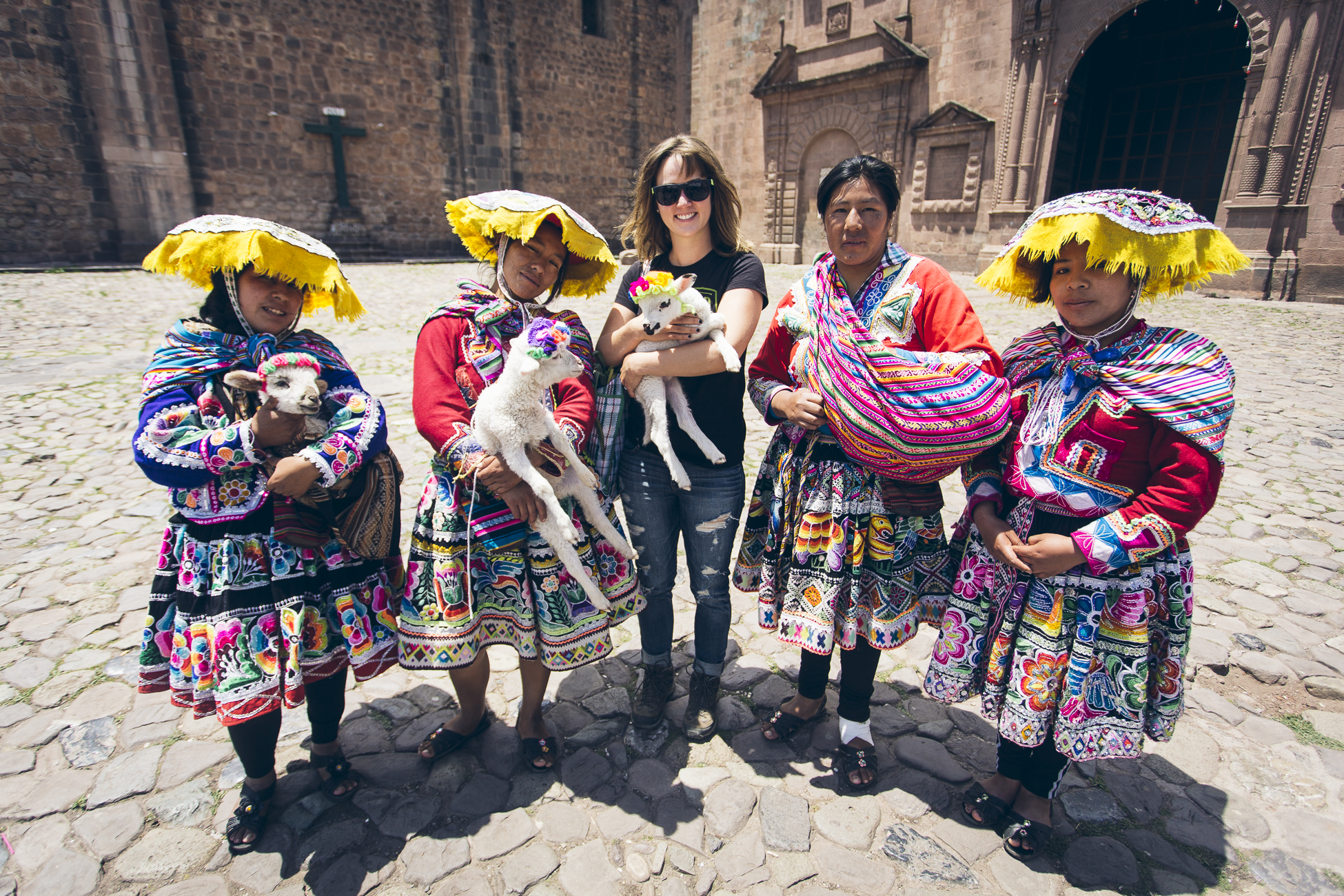 The main market was massive, filling a large warehouse-type building with stalls and tables piled high with various items.  Holiday sweet bread with random plastic toy items inside seemed to be a popular seller.  Distracted by the rainbow of colour from of all kinds of fresh fruit and vegetables, we eagerly filled our tote bag with gems.  I chose a large bag of fresh figs, which were ridiculously inexpensive, and made chia jam with them later.  We did not, however, buy any of the toy-filled crazy holiday bread. 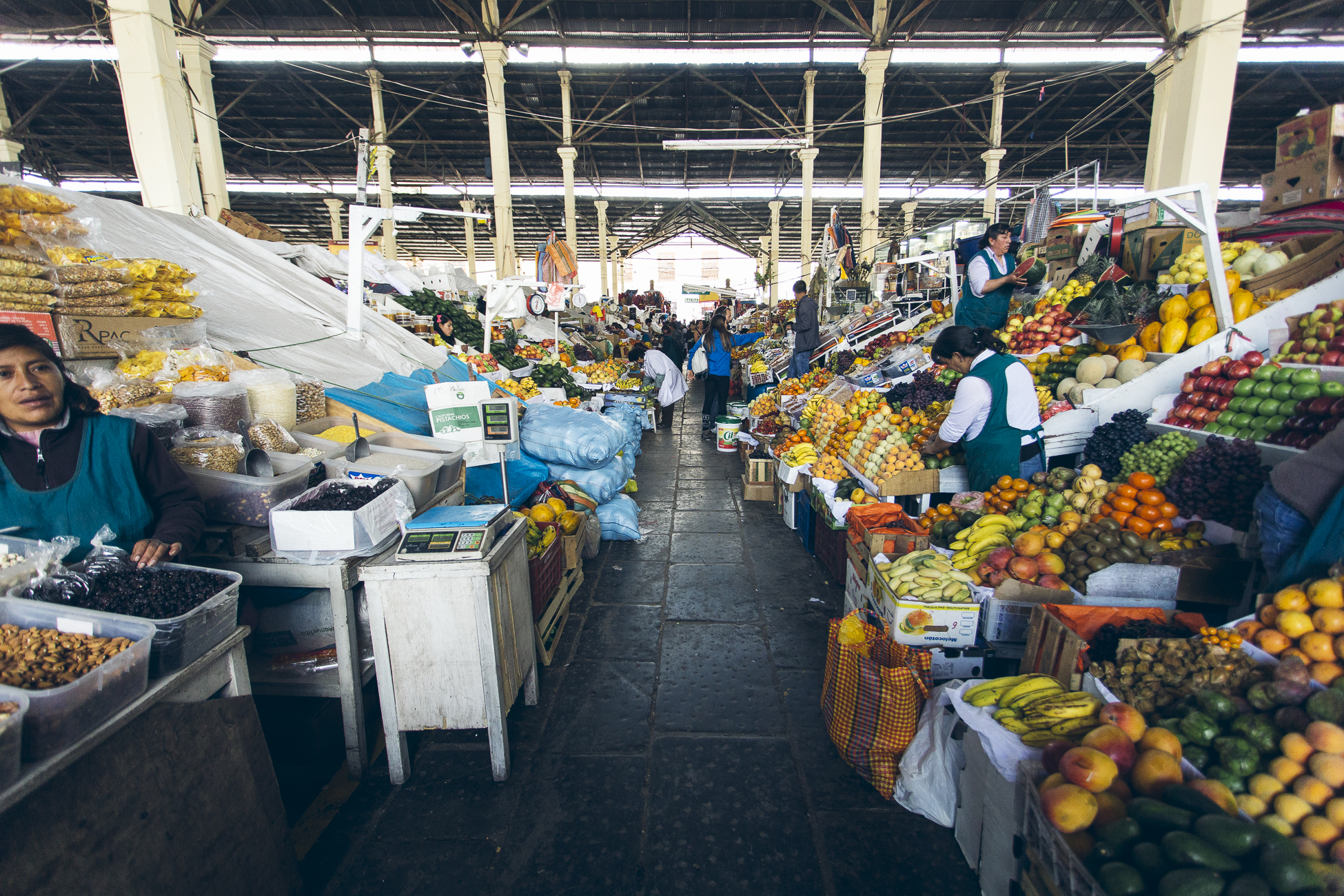 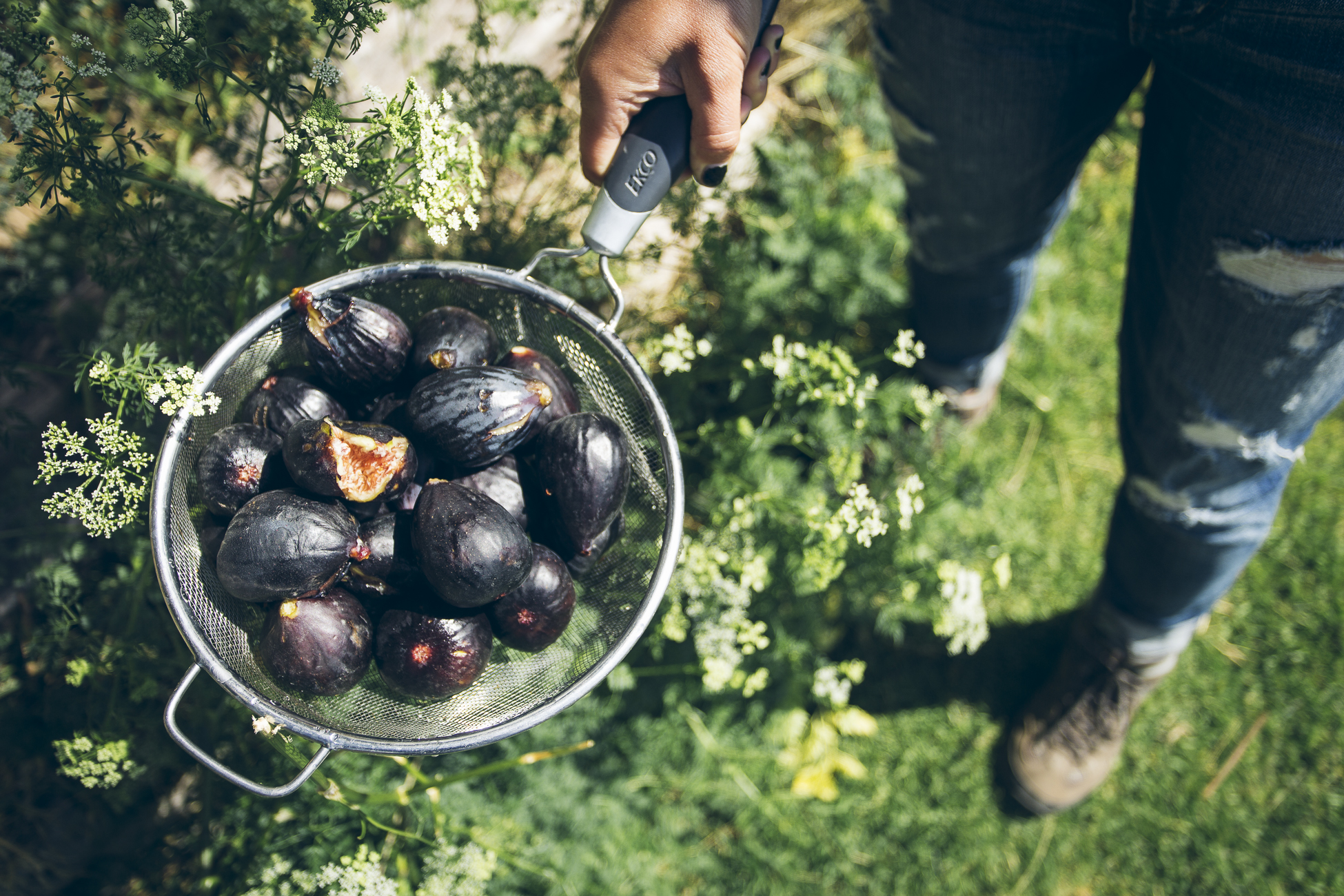 We celebrated my 30th birthday while in Cusco (Feliz Cumpleaños!). Richard and I had a fancy dinner at Cicciolina complete with Maracuya Sours, a fancy cheese plate, and other yummy tapas. It felt great to be seated at a high table surrounded by bustling waiters in the dimly lit room while we watched the white-coated chefs’ choreographed movements in the small open kitchen. We caught a cab back to our campsite and giggled at who knows what as we slammed the doors and tiptoed back to our parked rig, still intoxicated by the sweet pisco sours we had consumed at dinner. 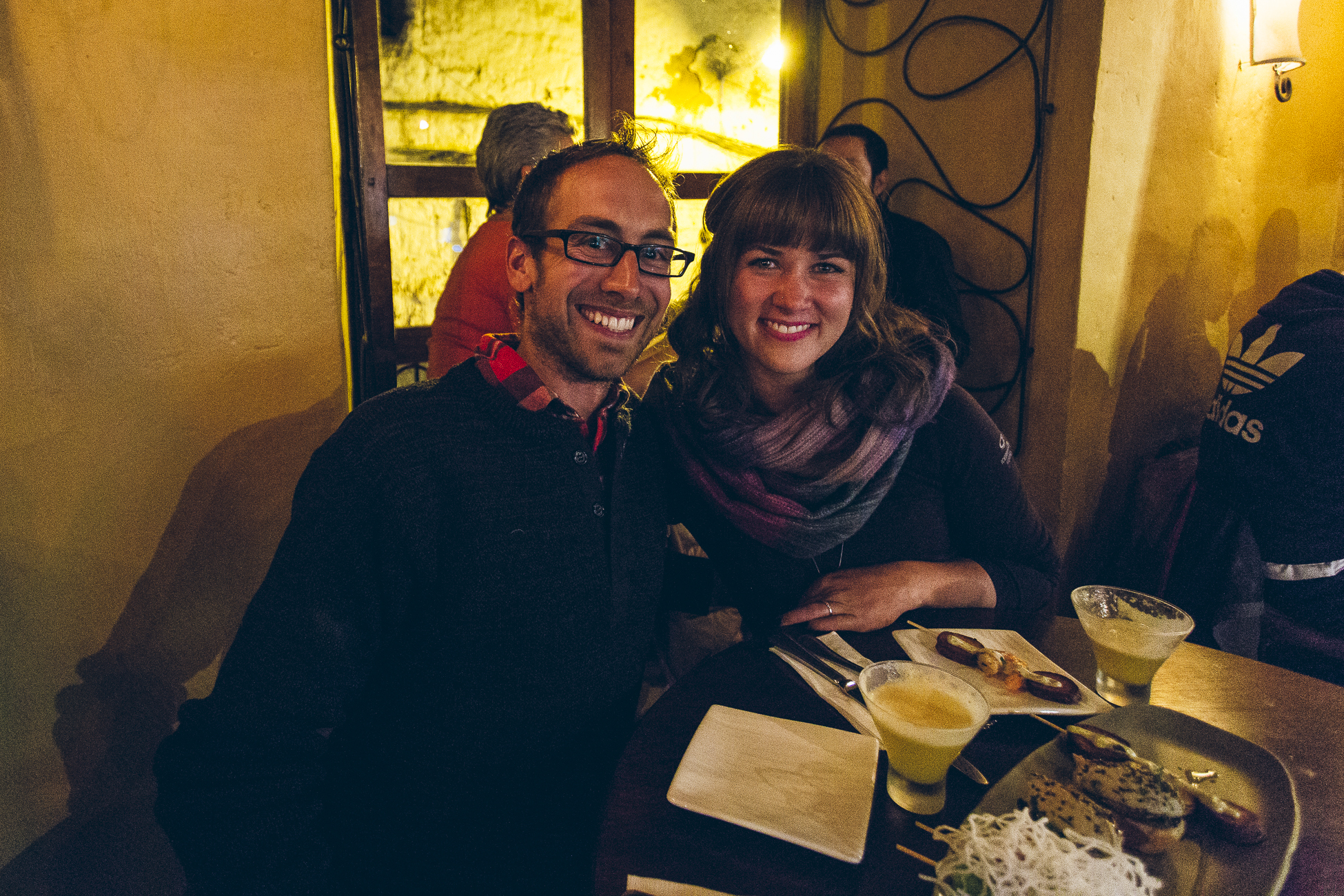 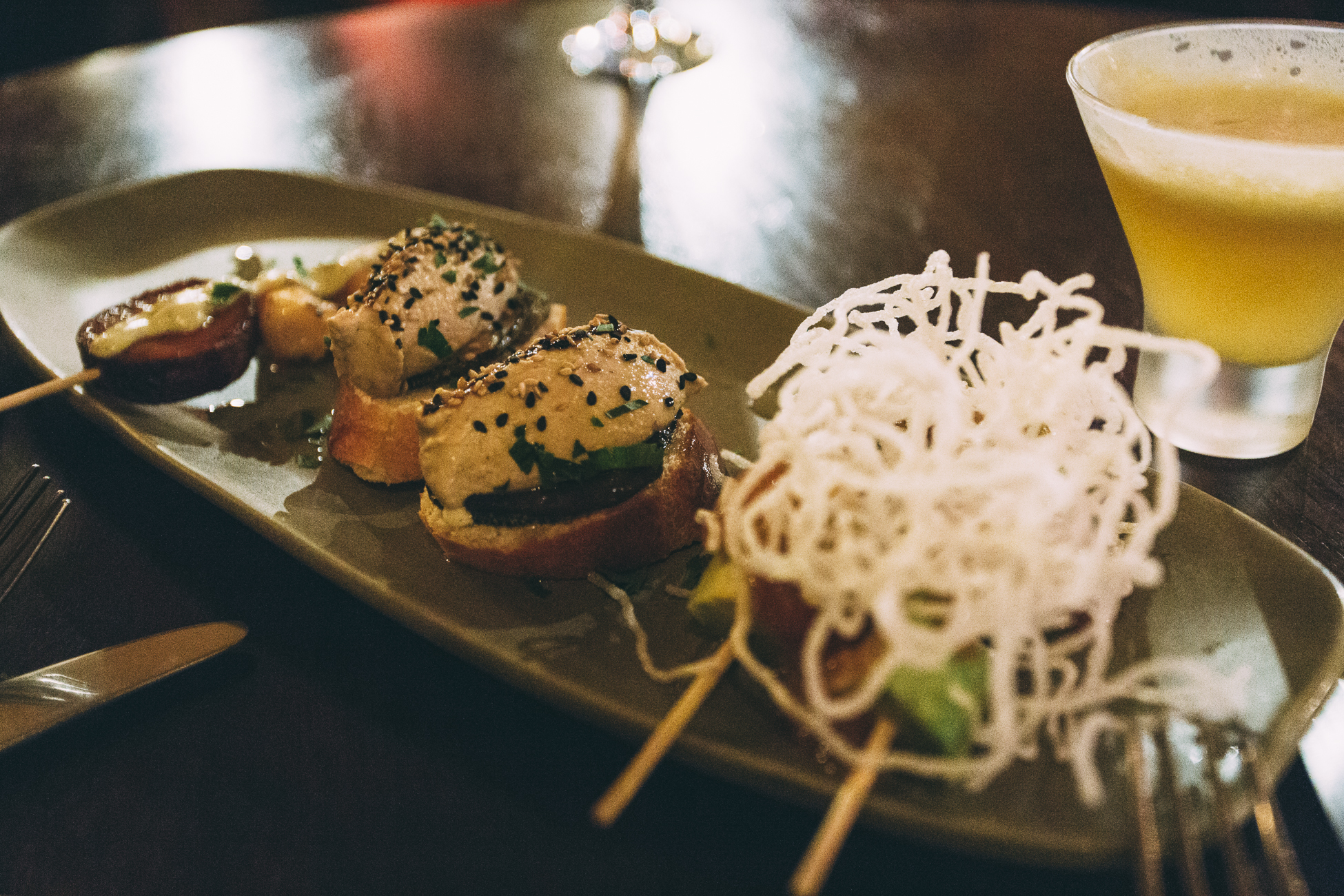 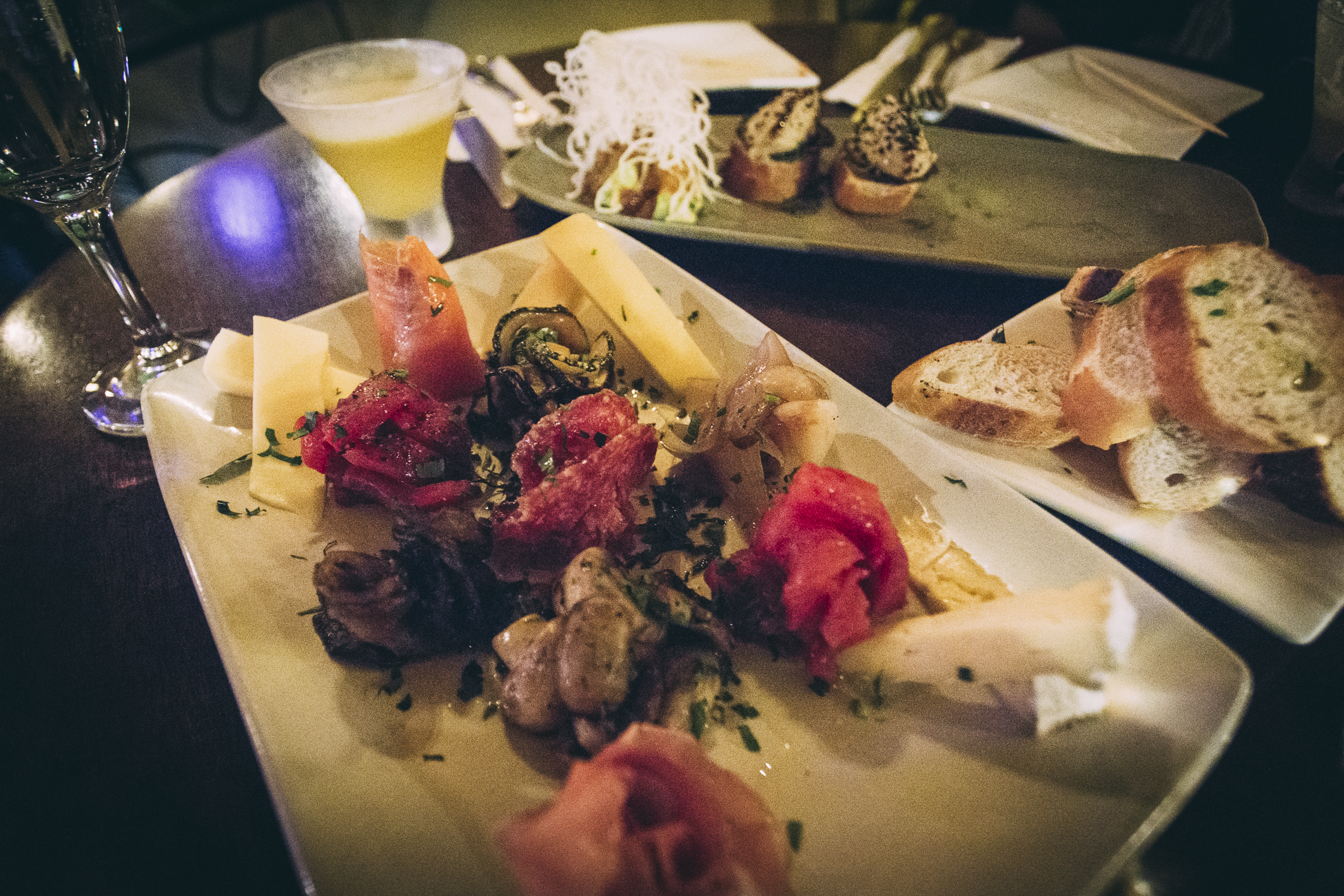 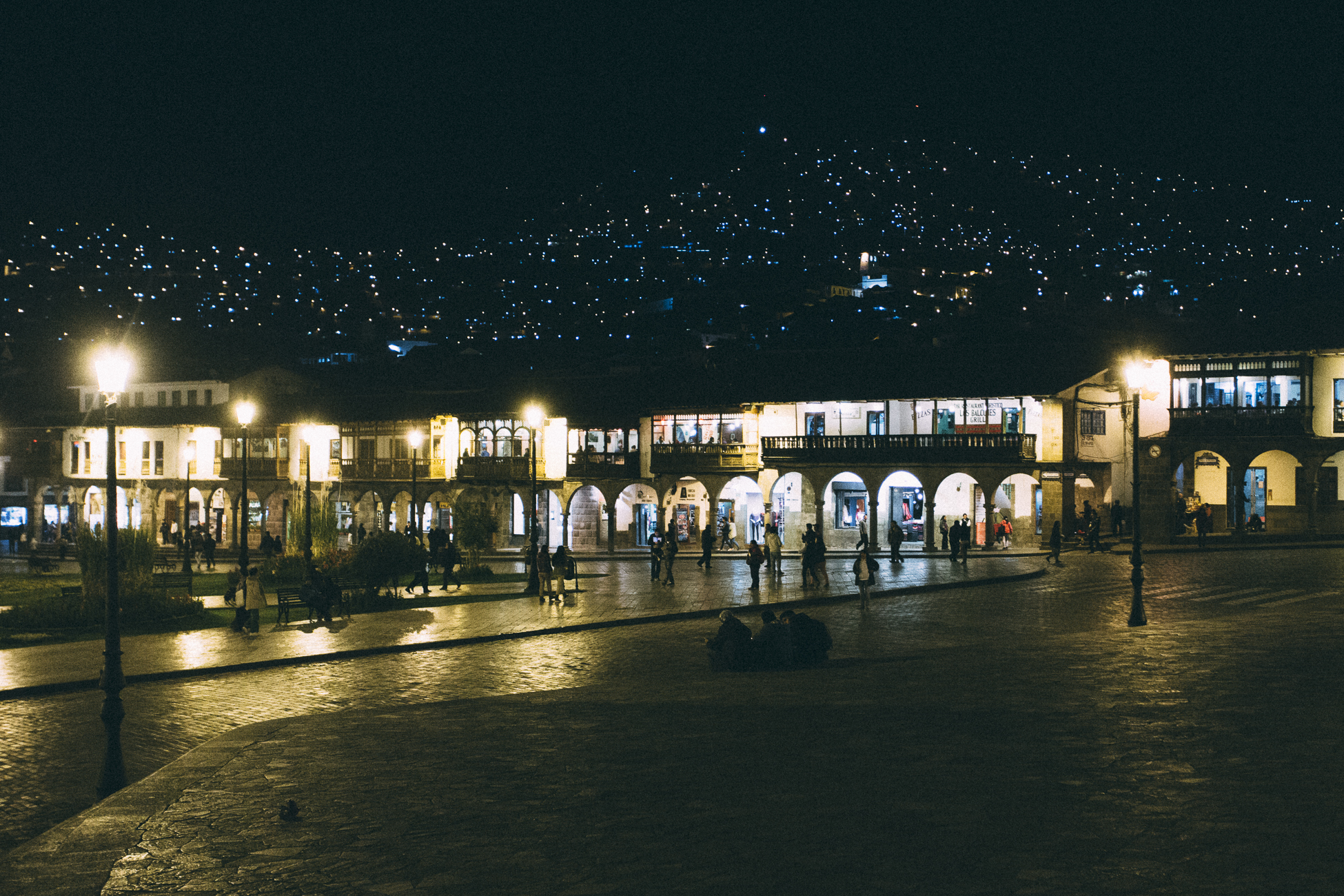 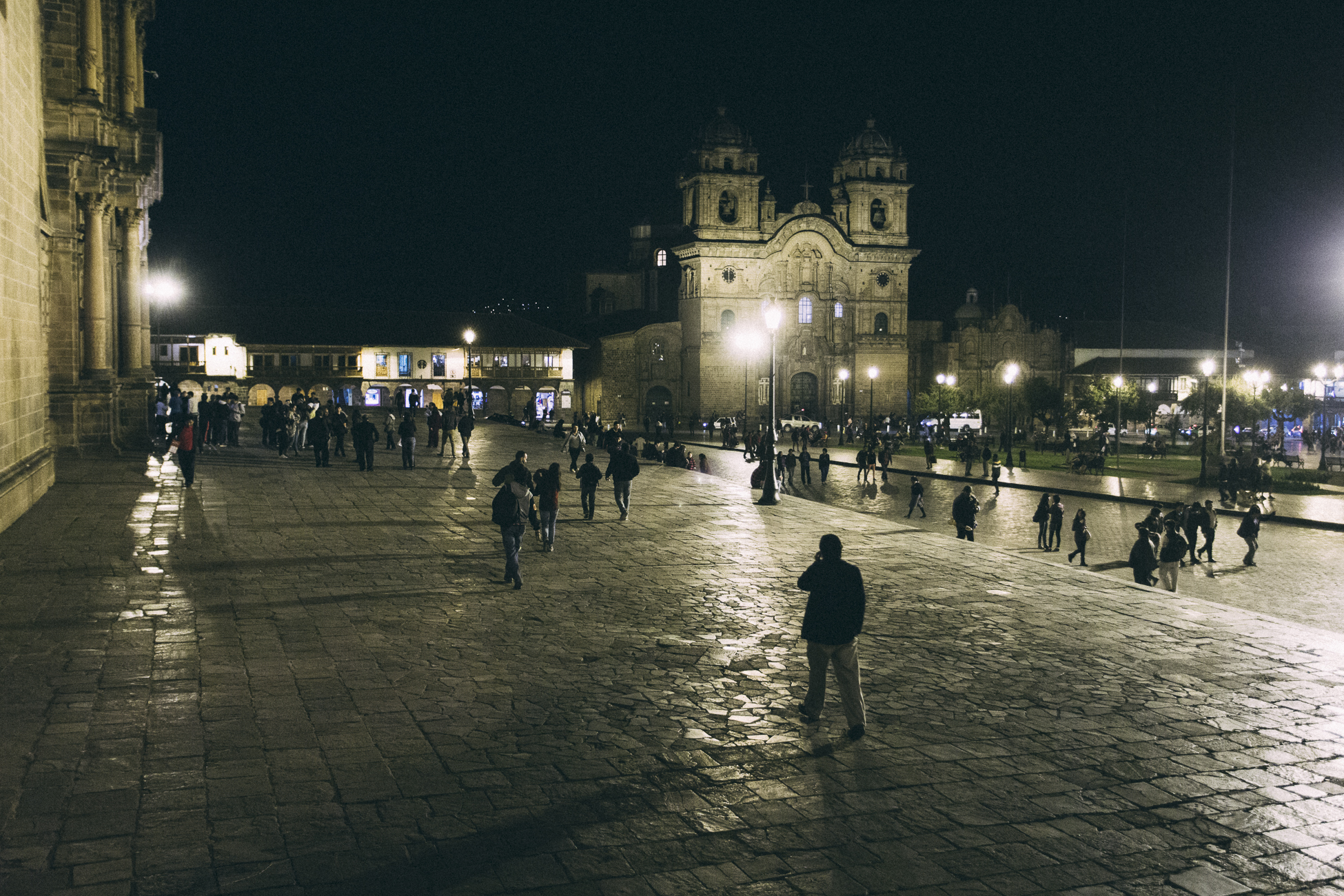 The next morning was my real birthday, at which time I was unpleasantly greeted by some sort of 24 hour intestinal issue.  I spent the day cooped up in the roof top tent watching Netflix in my pajamas, covered with blankies and my emergency toilet paper supply at close hand. I FaceTimed my parents and they didn’t spare any jokes at my expense, at first seeming a bit confused by my location (in tent), still with my glasses on, and having to take the occasional break from our chat, crossing my fingers that the only toilet at the campsite was unoccupied. Quite an interesting introduction to my 30’s!

We departed Cusco a few days later, truck pointed towards the Sacred Valley. We had a checklist of historical sites to see, including the infamous Machu Picchu.