We finally got started on the build of our truck.

The first thing to do was to gain a little clearance for our new tires.  We chose a small 4Crawler 1″ body lift to do the trick.  The other thing I like about a body lift is the increased clearance between the drive train and body.

Although the 4Crawler website looks like it was made in 1990 there are a ton of great parts available and a vast amount of Toyota tips and tricks that Roger (the owner) has learned over the years.  The lift was under $100 and showed up on my doorstep (figuratively, as we live in a condo) a week later.

I used Moovit Penetrating Lube the night before to spray all of the body mount bolts.  I also hit the bumper and suspension bolts while I was at it since I knew all of those were coming apart sooner or later.  I skimmed the instructions and laid out the parts.  The big thing to remember is that the two front mounts are the smaller diameter blocks, but also have a smaller diameter bolt hole than the bed blocks.  They also use shorter bolts than the other cab mounts.  Just ask me how I figured this one out… (apparently my skimming of the instructions should have been more thorough). 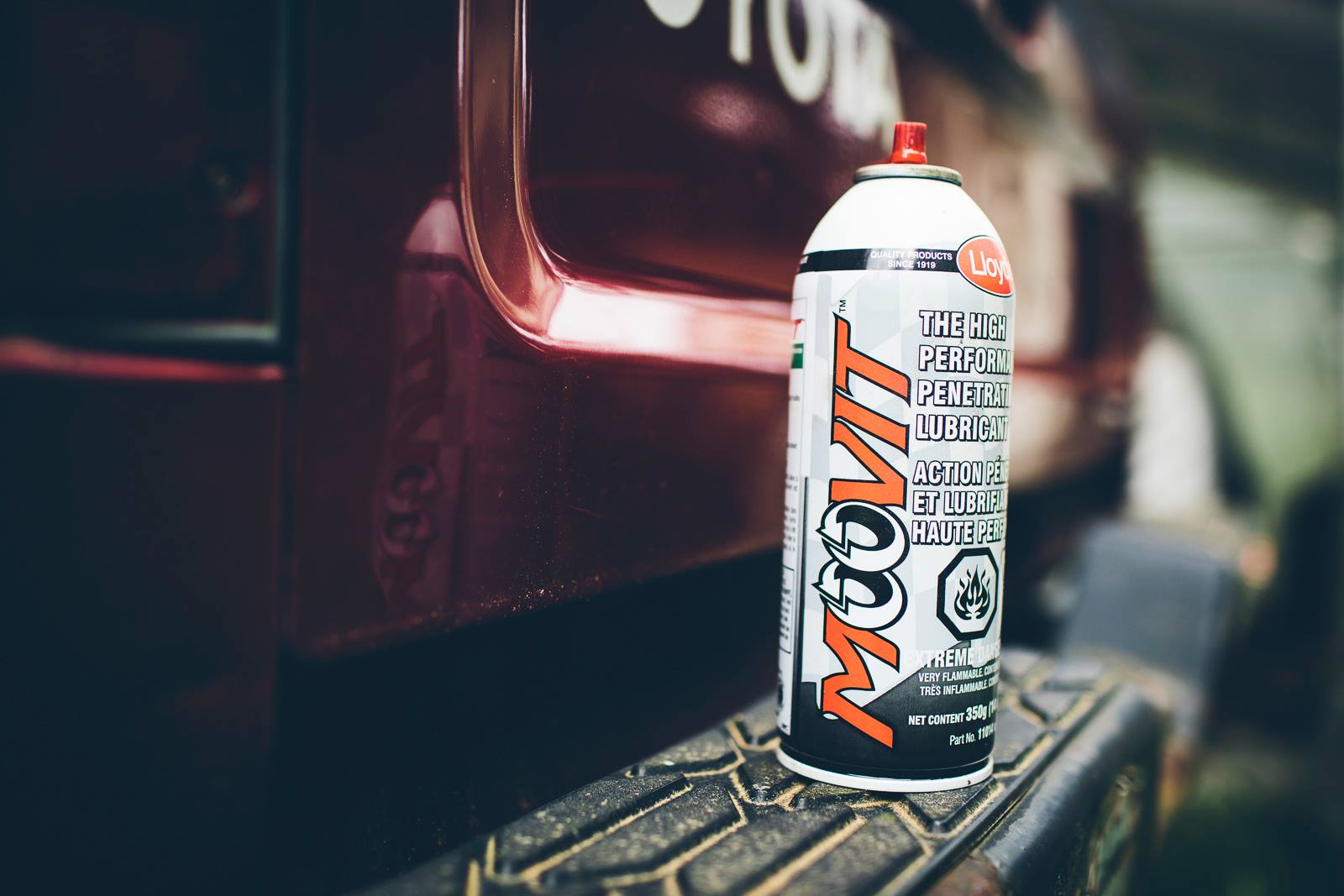 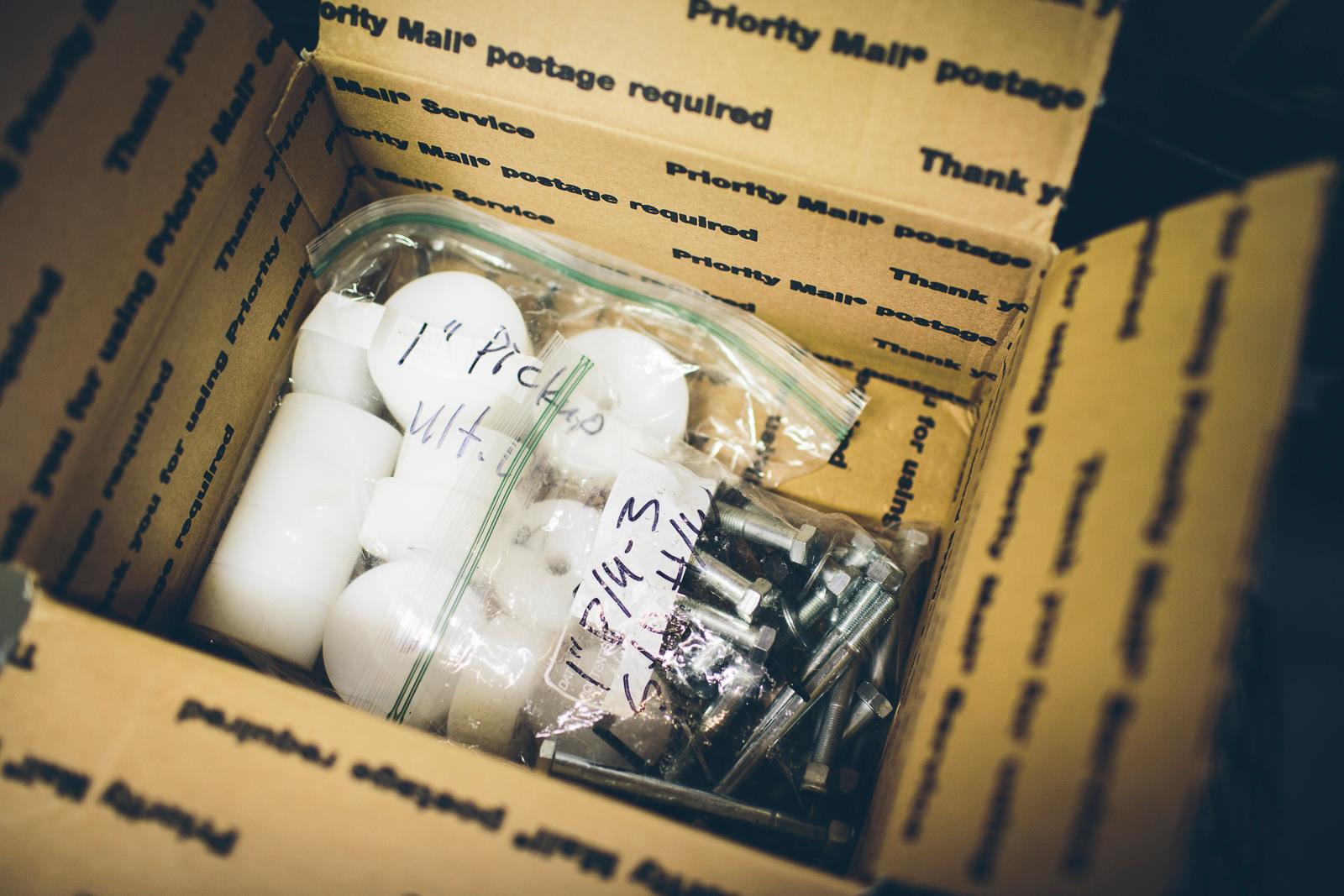 I jacked up the cab with a floor jack and 2x4s (to distribute the weight) and installed the body lift using the existing body mounts.

During this install I figured that I should clean up the chassis under the bed so I just removed the entire thing (hey, I was unbolting the whole thing anyway!).  I removed the spare tire and mount and did a quick check for rust on the frame.  Everything looked good so it got a fresh coat of satin-black before getting covered up again. 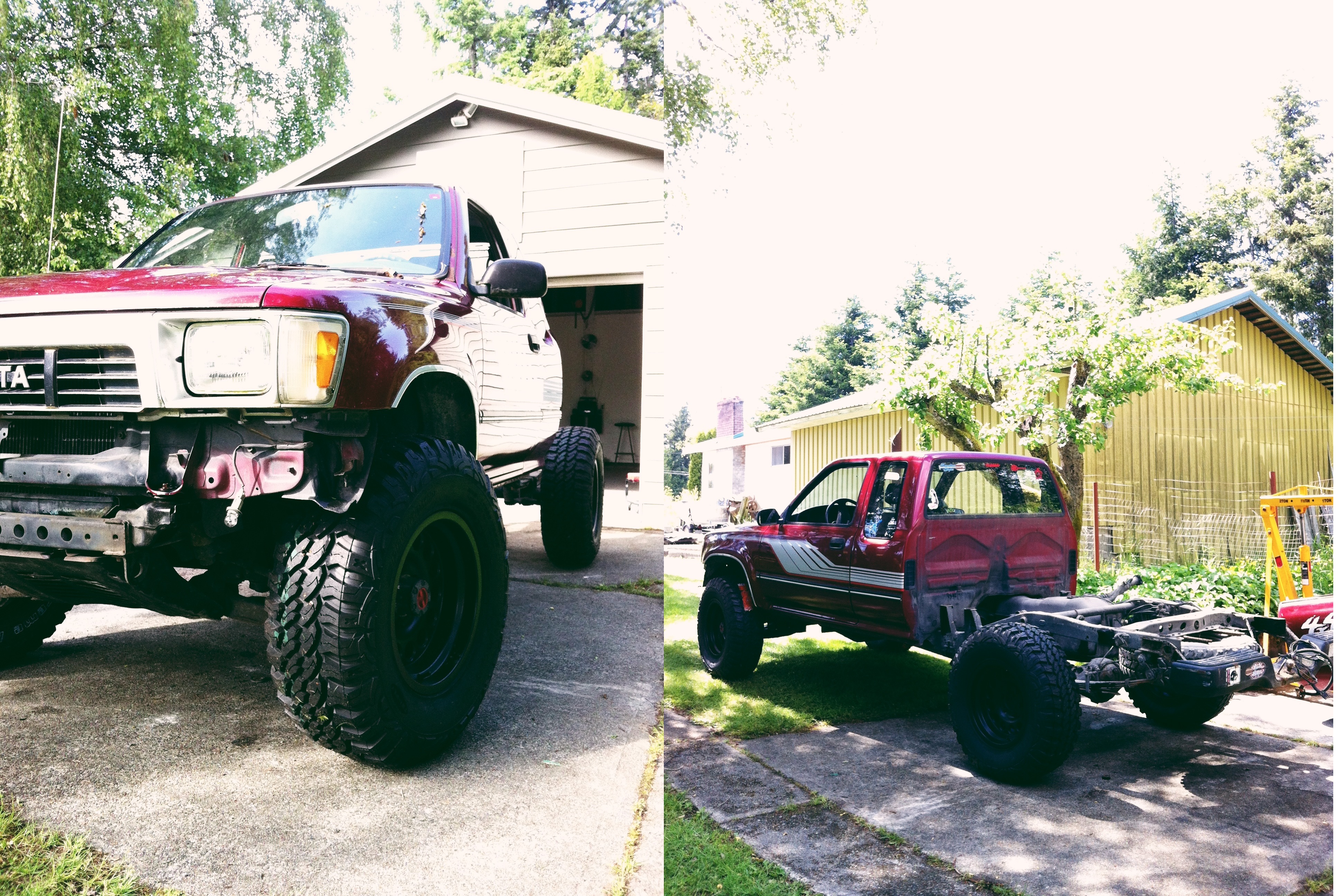 Once I dropped the bed back on I left all bolts hand tight only before lining up the bed and cab, then I tightened everything down.

The best part about the small lift was that there was almost no other modifications to the truck required to make this work.  The steering shaft didn’t need adjusting, the fan clears the shroud without issue, and I can redrill the front bumper mounts to match the original body lines.  The only issue was that the shifter boots were binding and caused the tranny to pop out of 2nd and 4th gear.  I redrilled (by 3/4″) and shifted the shifter boot bezel back to solve this.

With 265/75R16 tires we have plenty of clearance now without having to take a sawzall to the fenders. 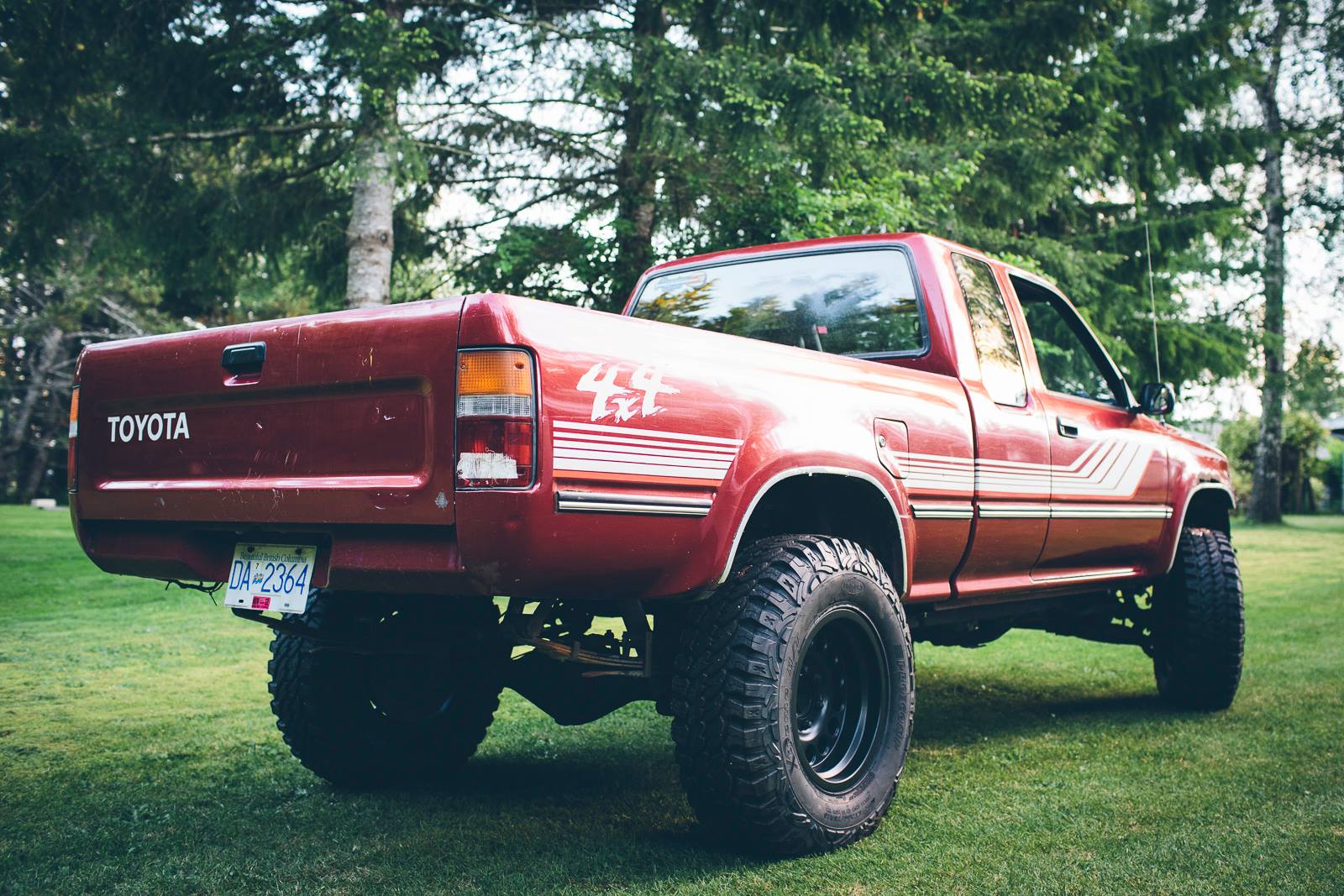 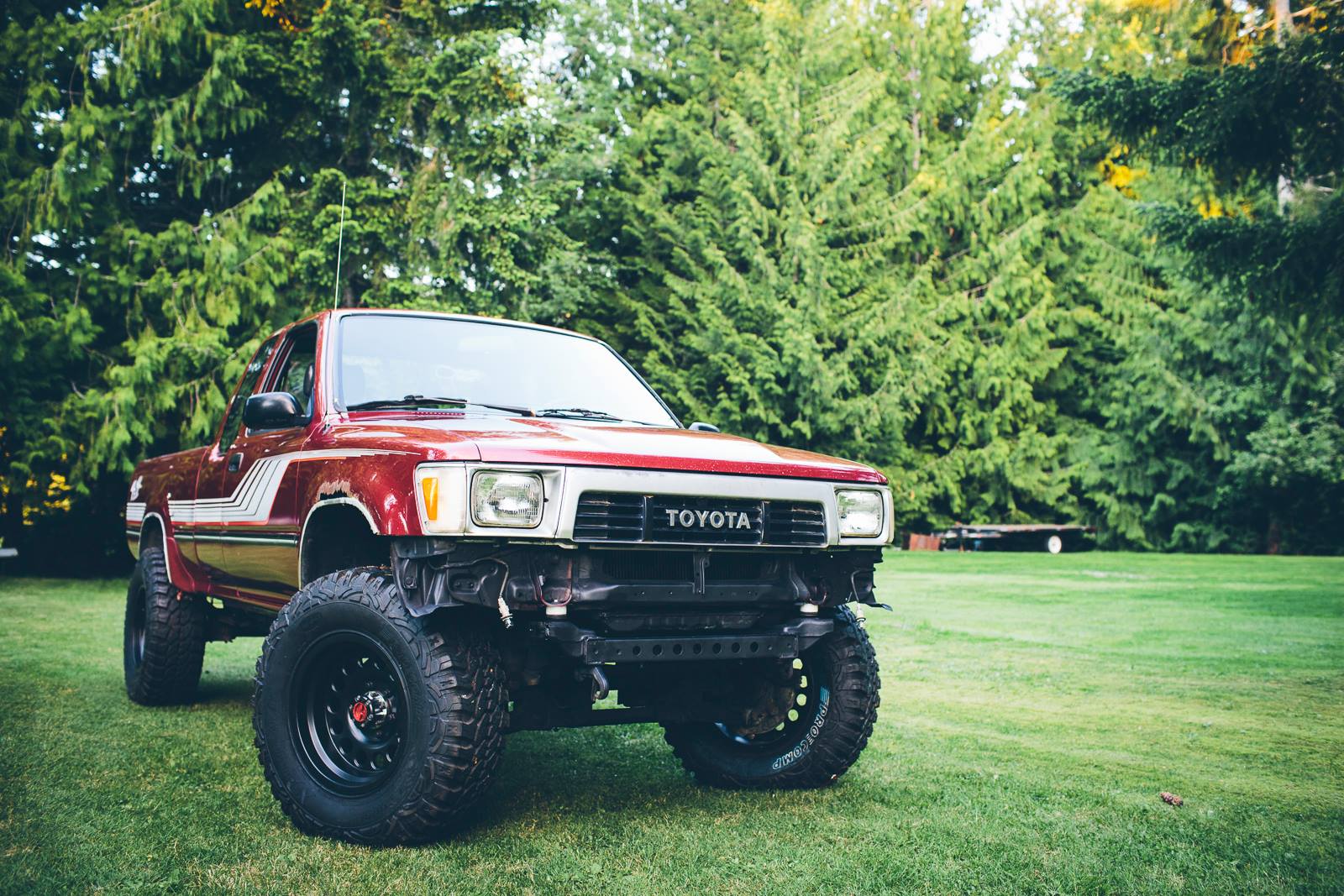