We rolled into Manizales hoping to set up camp at a popular coffee finca called La Hacienda Venecia.  The property was lovely.  A big hacienda with a wrap around deck, rolling grass fields, perfectly clean bathrooms complete with liquid soap and towels, library-themed rooms, and the most amazing kitchen complete with granite countertops.  Yes!  Unfortunately they did not want our sweaty, dust-covered, unkempt persons camping on their property.  Fair enough.

We took our pesos elsewhere, to Finca Guayabal, where we were greeted by the soft-spoken owner, Jorge. “Yeesssss… we do have camping, buuuuut the cost is $25,000 pesos (roughly $12.50 USD).”  He looked sorry for the price . Likely this was because we roared up the hill to the finca in low-range first gear, disturbing the peace and serenity of the place and climbed out of our truck dirty and sweaty from a long day of driving.  Meanwhile, there was a group of clean collared-shirt-wearing gringo tourists indulging in a multi-course lunch at the cloth-covered tables in the dining area, bags full of coffee beans purchased after their very refined coffee tour.  Excellent.  We set up the tent in a grassy area down the hill with stunning views of the mountains surrounding the Finca.  Jorge brought us come coffee and allowed us to enjoy the views with a warm cup in our hands.

Jorge sat down with us the next morning and shared a bit about himself.  He worked long hours as a Mechanical Engineer in Bogota prior to his time at the Finca.  He left his job in Bogota as he wanted a better life balance and now helps his mother run the Finca, which has been in his family for over 50 years.  We could really tell he enjoys what he does, as he was a great host to all of his guests, complete with a shy smile and twinkle in his eye. 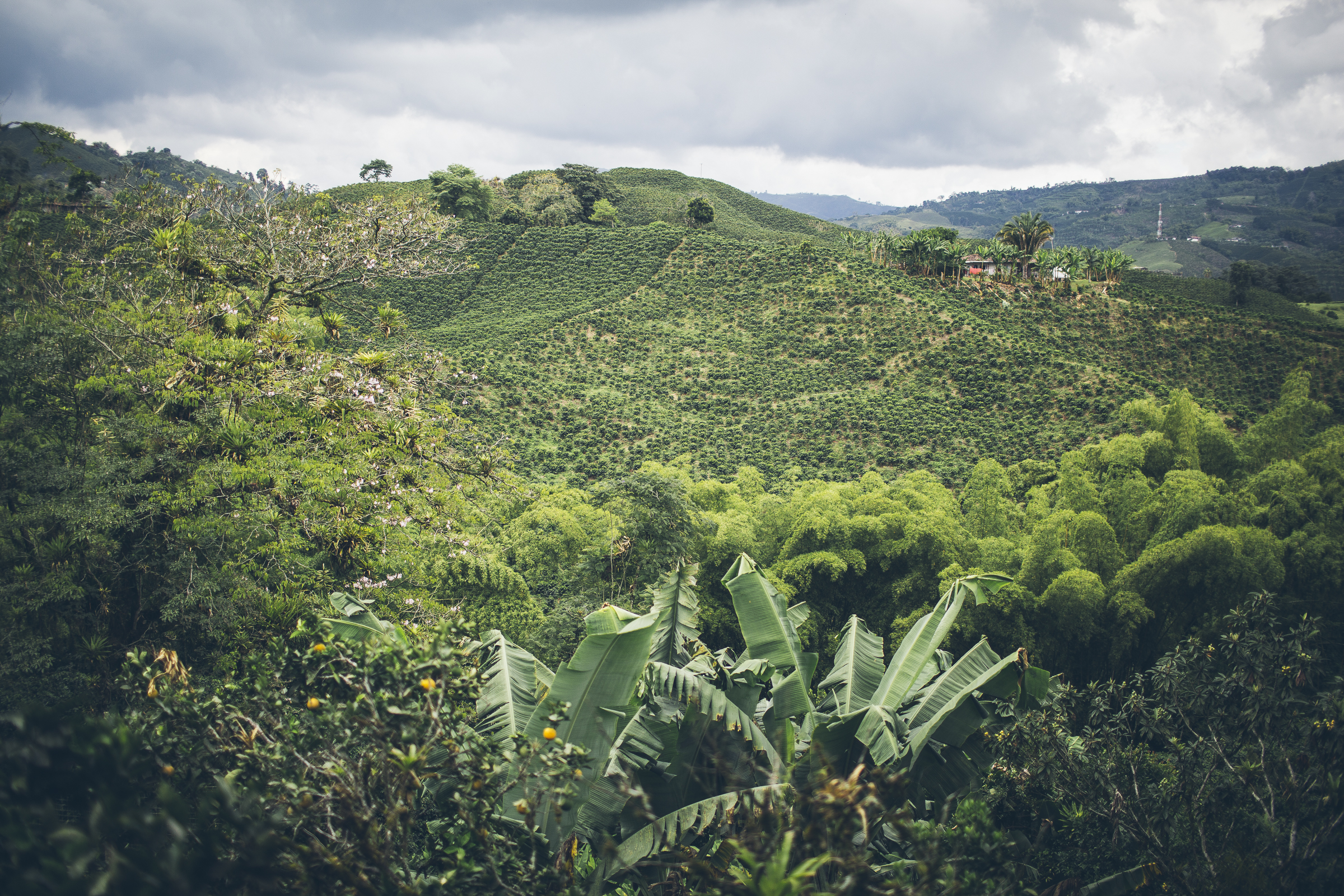 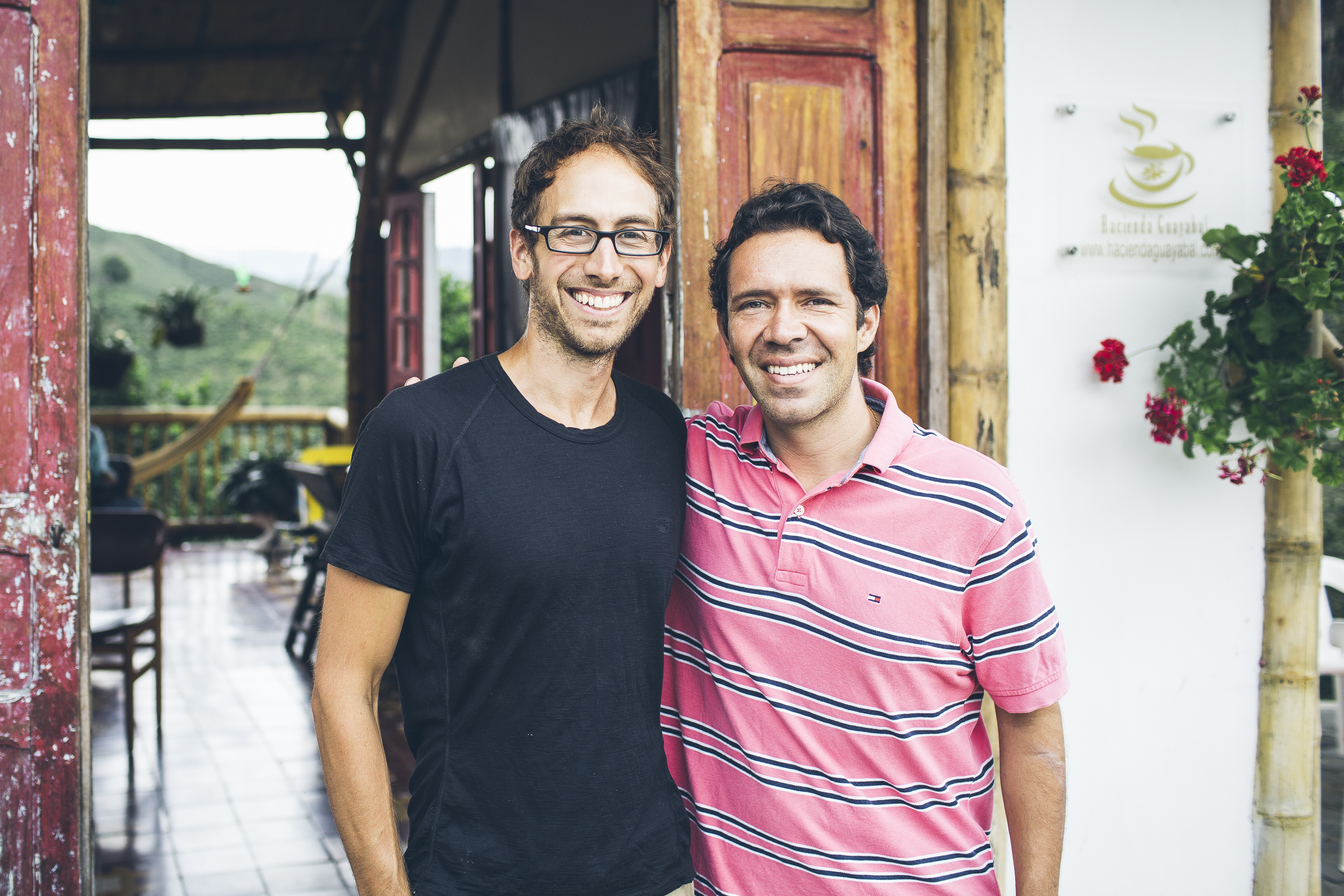 Next up was our first Colombian termales (i.e. hot springs) experience!!  We chose the Balneario Santa Rosa de Cabal pools, which were situated in a lovely park-like setting.  Multiple waterfalls rained down into cold natural pools, but we plopped ourselves into a large hot and steaming man-made pool full of Colombians.  How relaxing!  As the only foreigners soaking up the goodness we got a few stares and smiles.  Once our muscles were fully mineralized, we reluctantly climbed out and headed towards the touristy town of Salento. 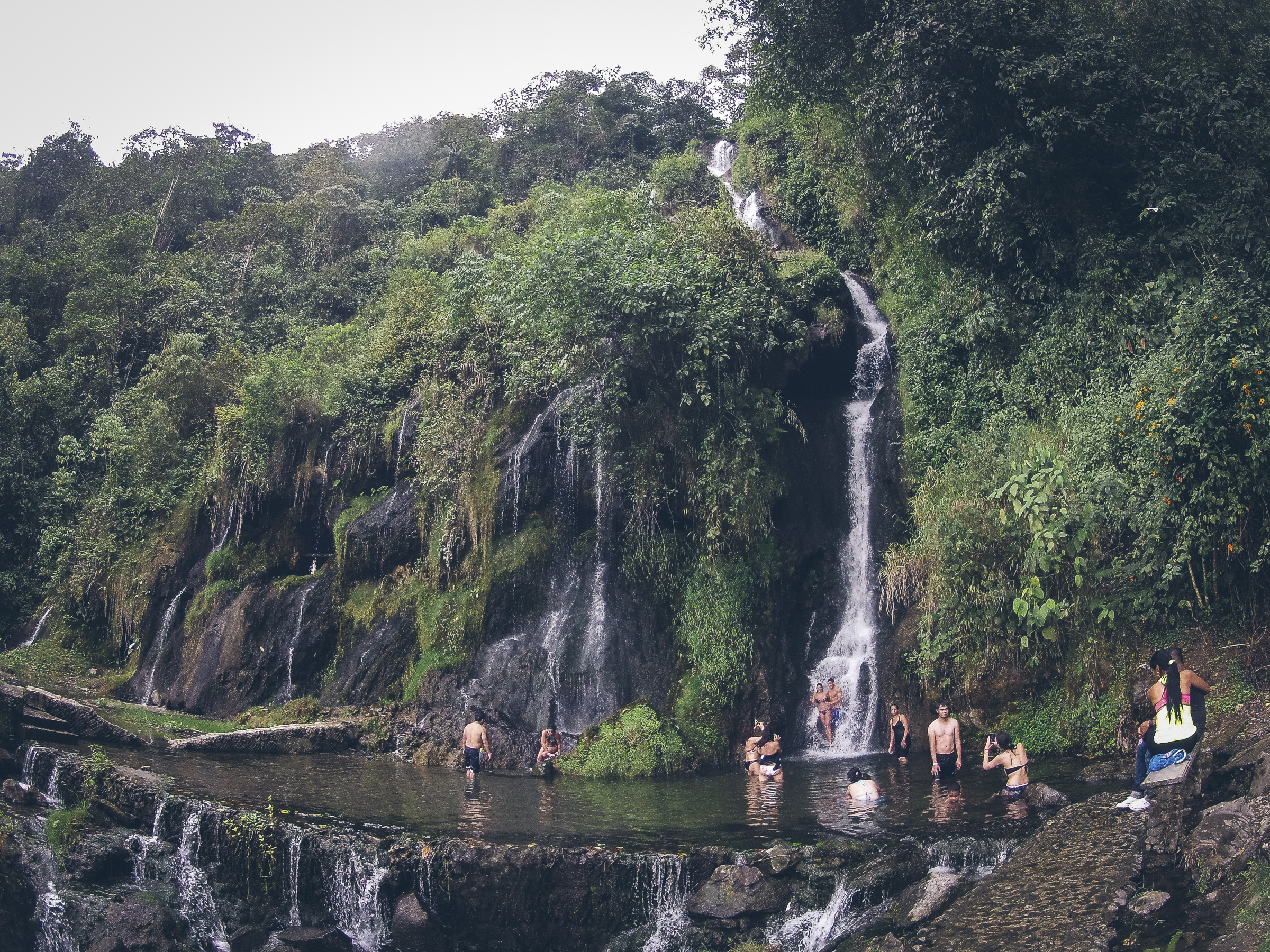 It was a weekend when we arrived and the town was packed with tourists (local and foreign), street musicians, and a full-on tent city made of street food vendors.  This was one of the busiest towns (in terms of international tourism) we had been to in Colombia and we were definitely surprised to see so many people!  We sampled the local foodstuffs, including as many coffee shops as possible, and headed to our hostel up the hill.  We camped at La Serrana Hostel which was probably one of the nicest places we have ever camped at.  A new bathroom/shower had recently been put in near the camping area complete with copper sinks, tile showers, and a leather armchair. Breakfast was included in the price, and we sat down every morning in the communal dining area for our coffee, banana, scrambled eggs and veggies, with warm rolls, butter and jam.  How civilized! 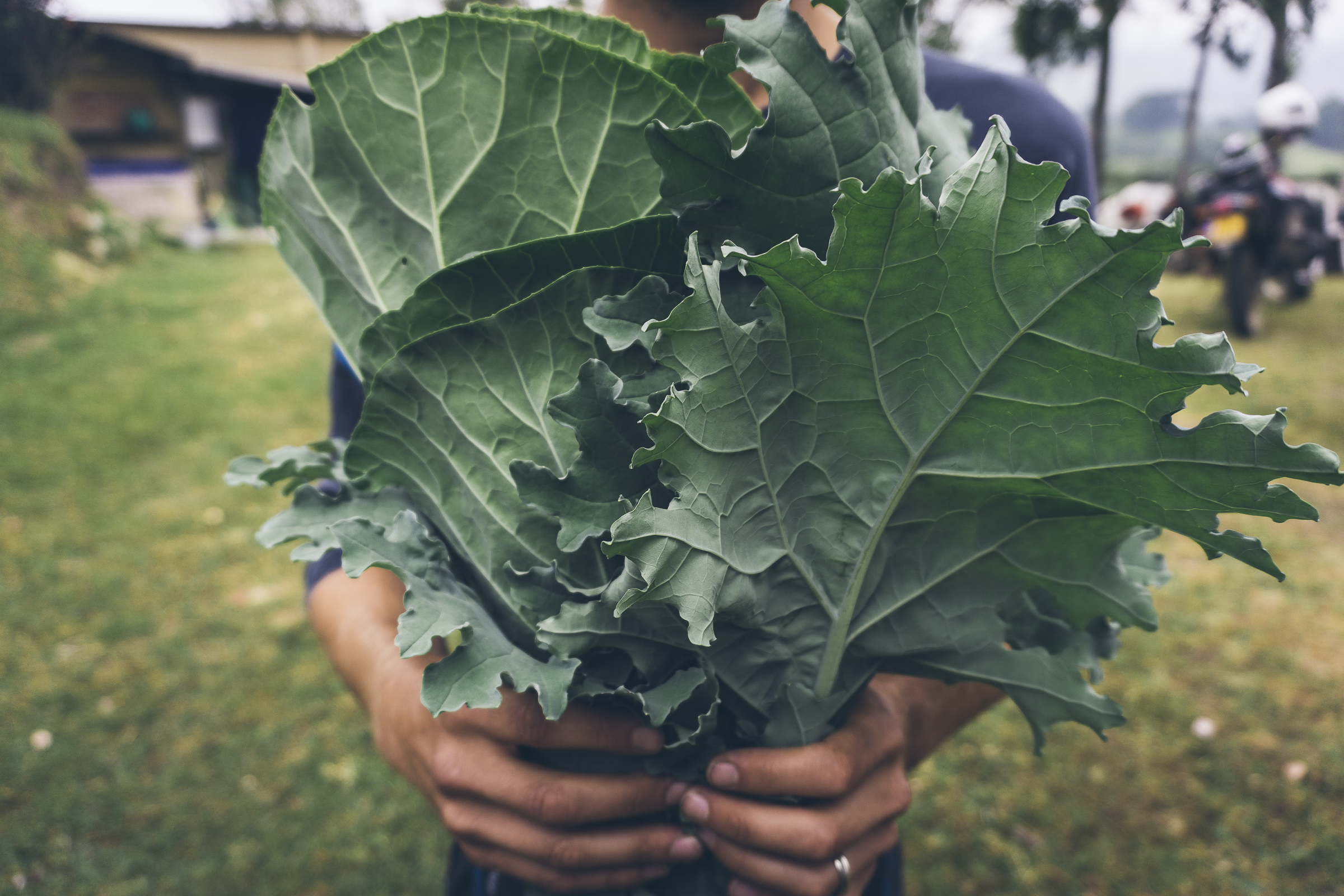 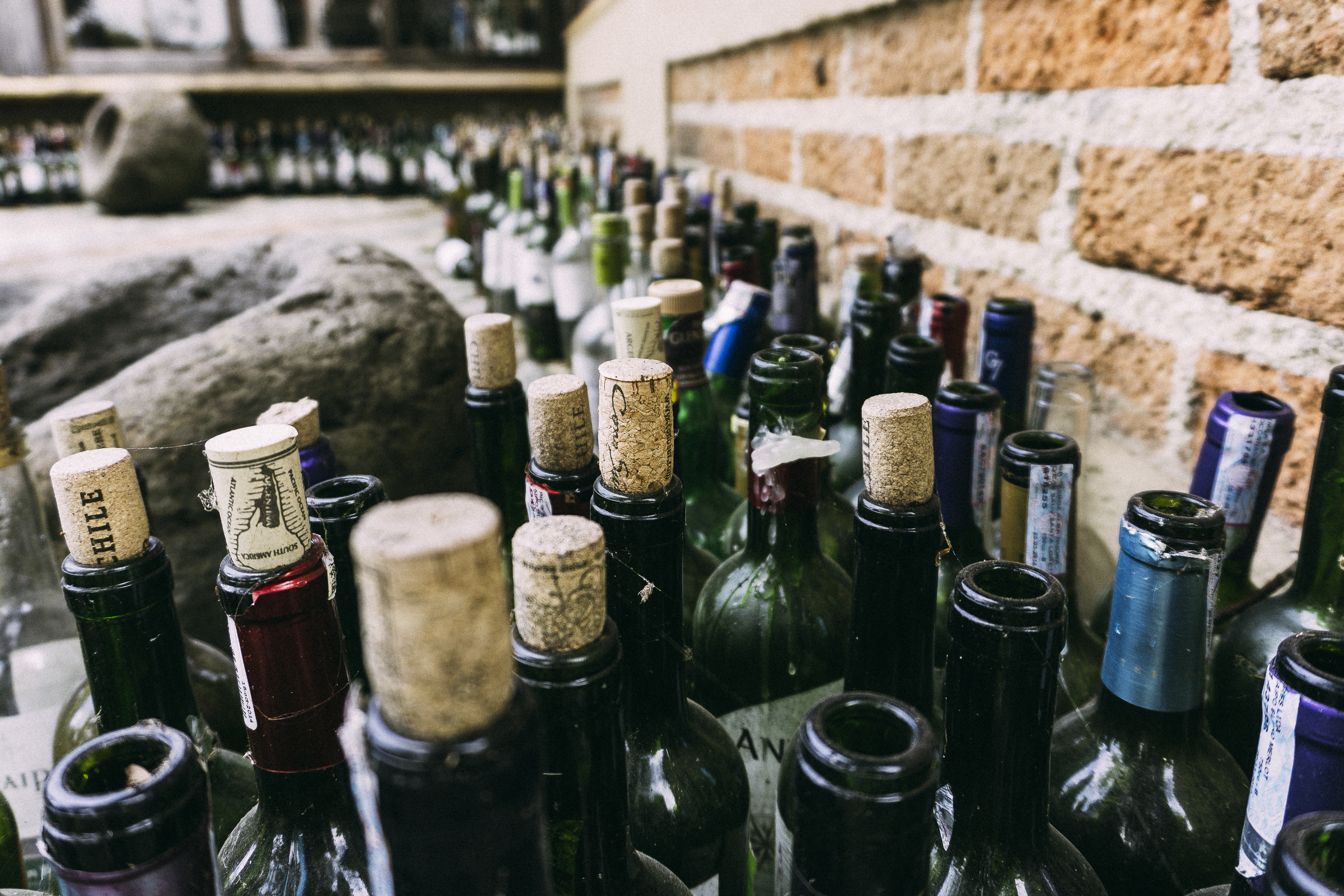 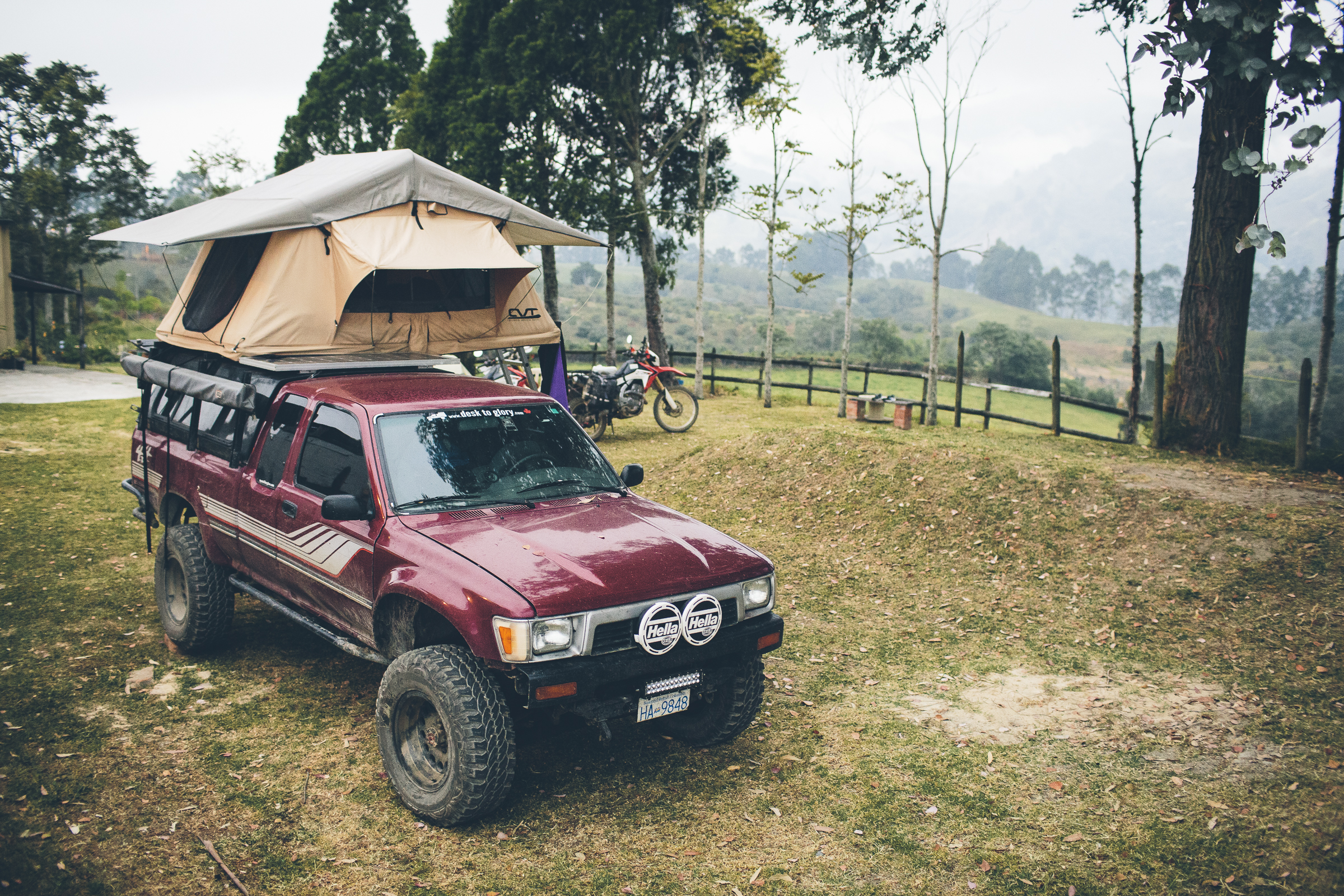 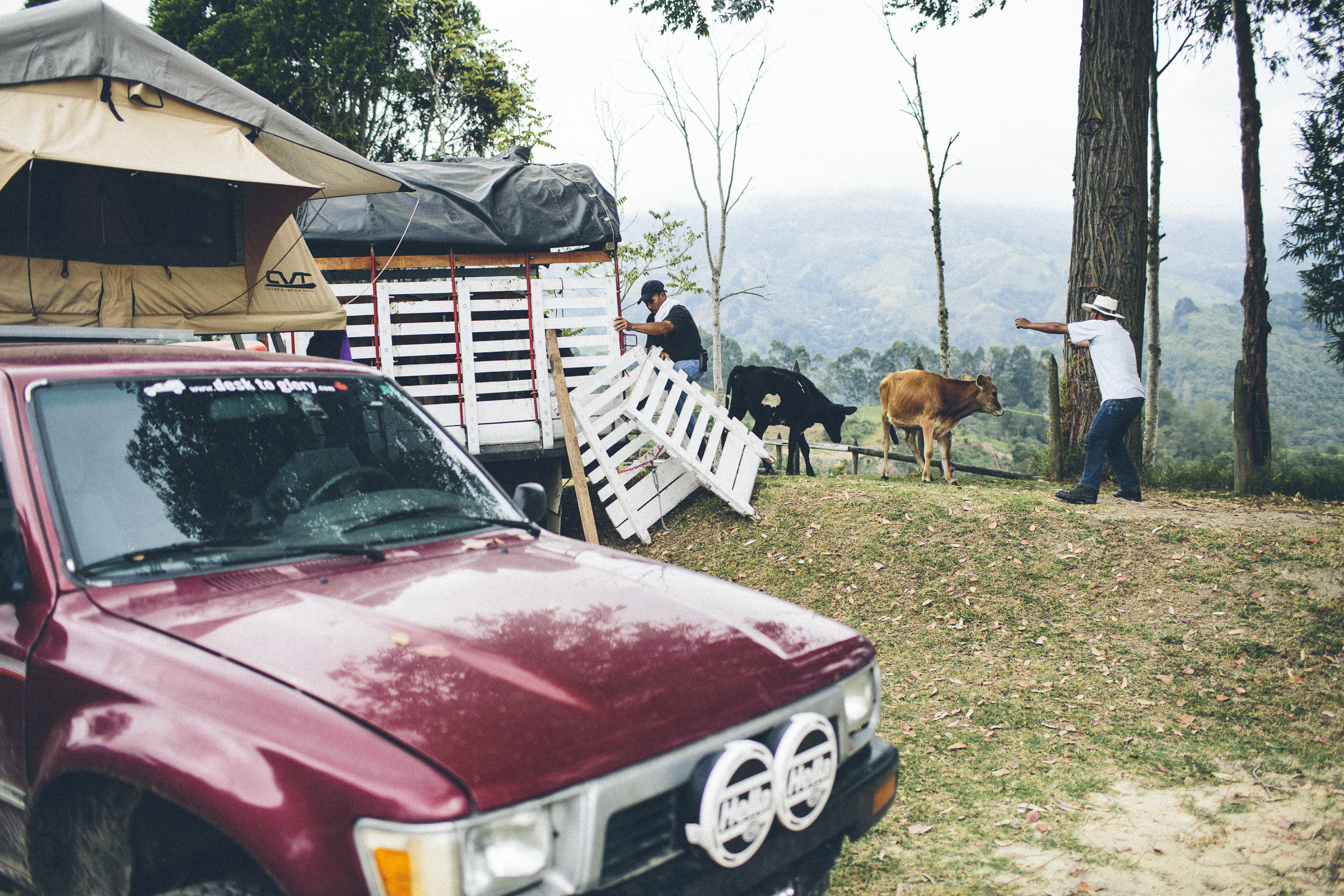 While in Salento we visited the tallest palm trees in the world at the Cocora Valley.  We crunched into the back of a Willy’s Jeep with at least six fellow travelers in the town square and rode the winding roads to the trailhead. It was quite the sight, a convoy of around ten Willy’s Jeeps packed with tourists, some hanging off the back, heading into the mountains.  We hiked to Acaime where we took a break and enjoyed our complimentary beverages with purchase of entry: panela with cheese for Richard and hot chocolate for myself.  We were visited by many hummingbirds and even some furry creatures!

As we were sipping on our respective beverages, we met Heather from California who is riding her Yamaha XT225 motorcycle south.  We had some great conversation with her as we tackled the next part of the hike to the top of the mountain.  The views from the top were incredible. 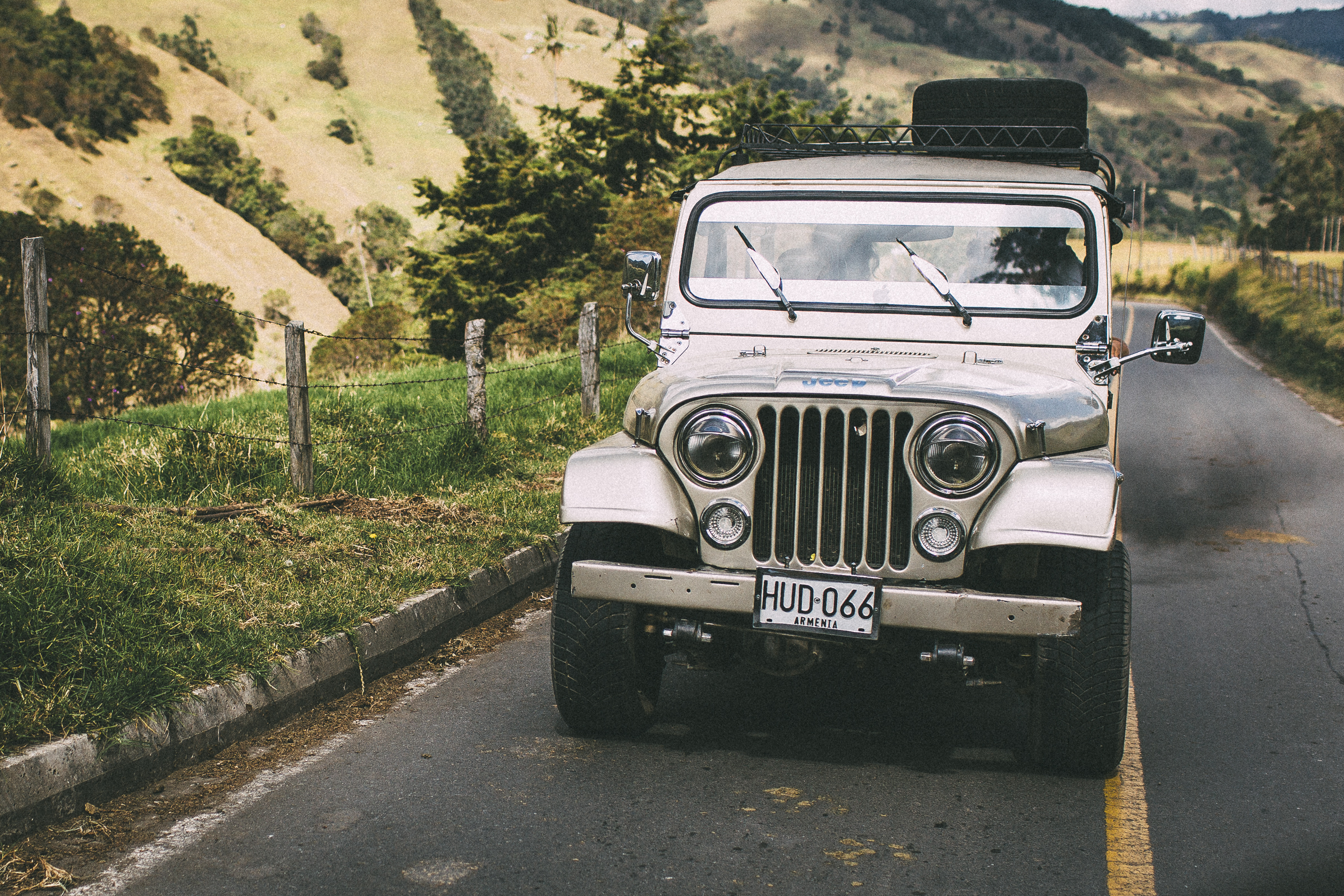 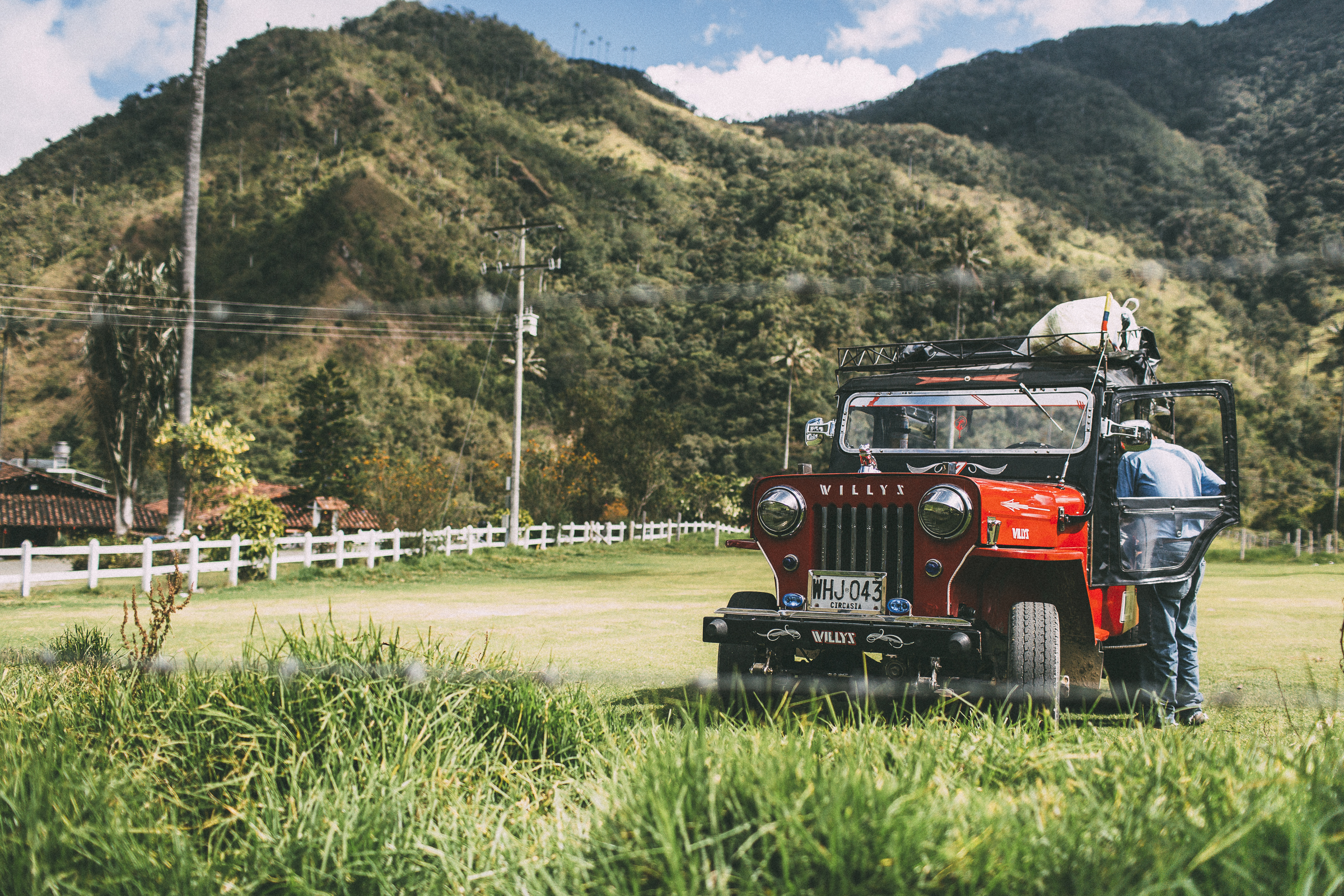 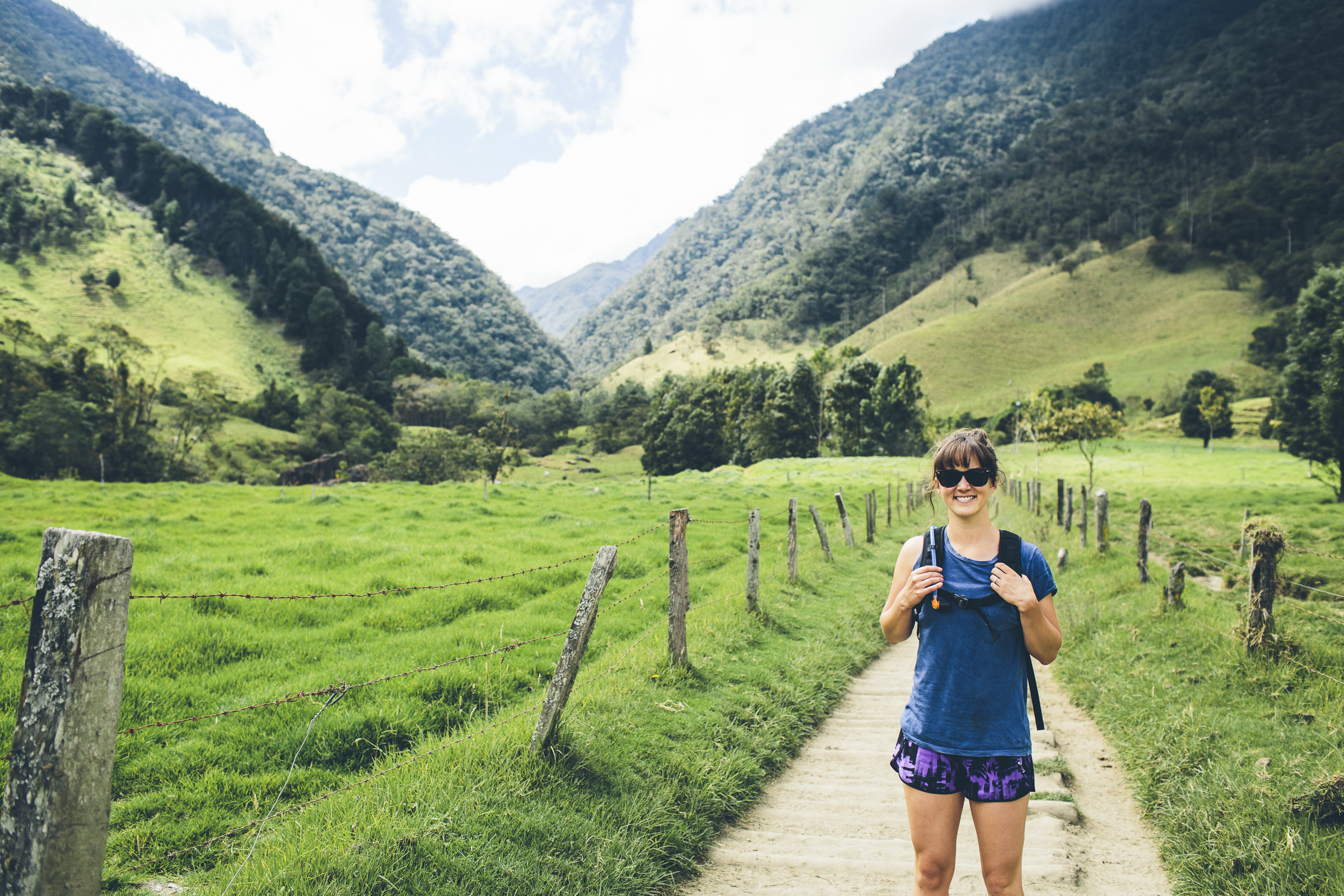 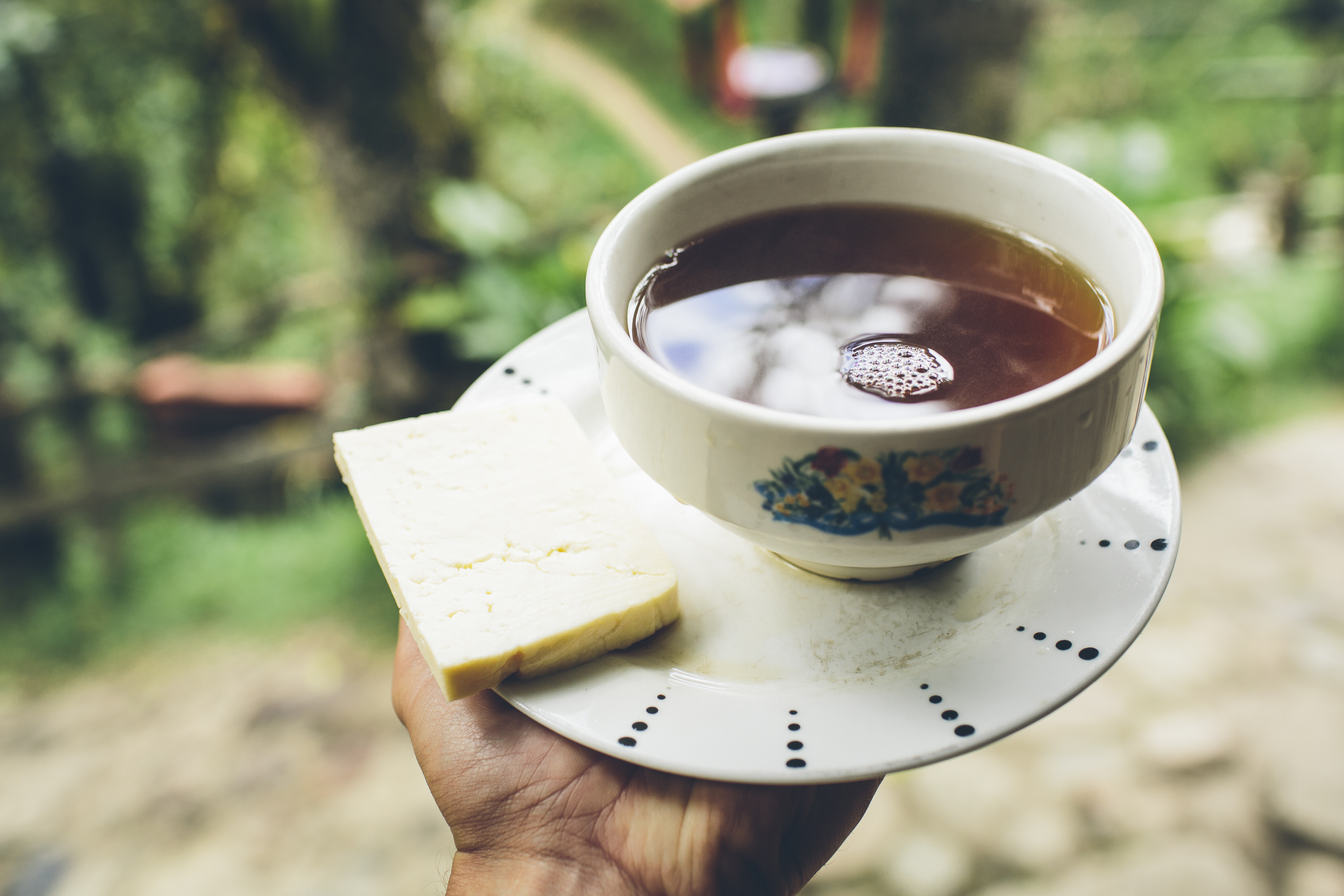 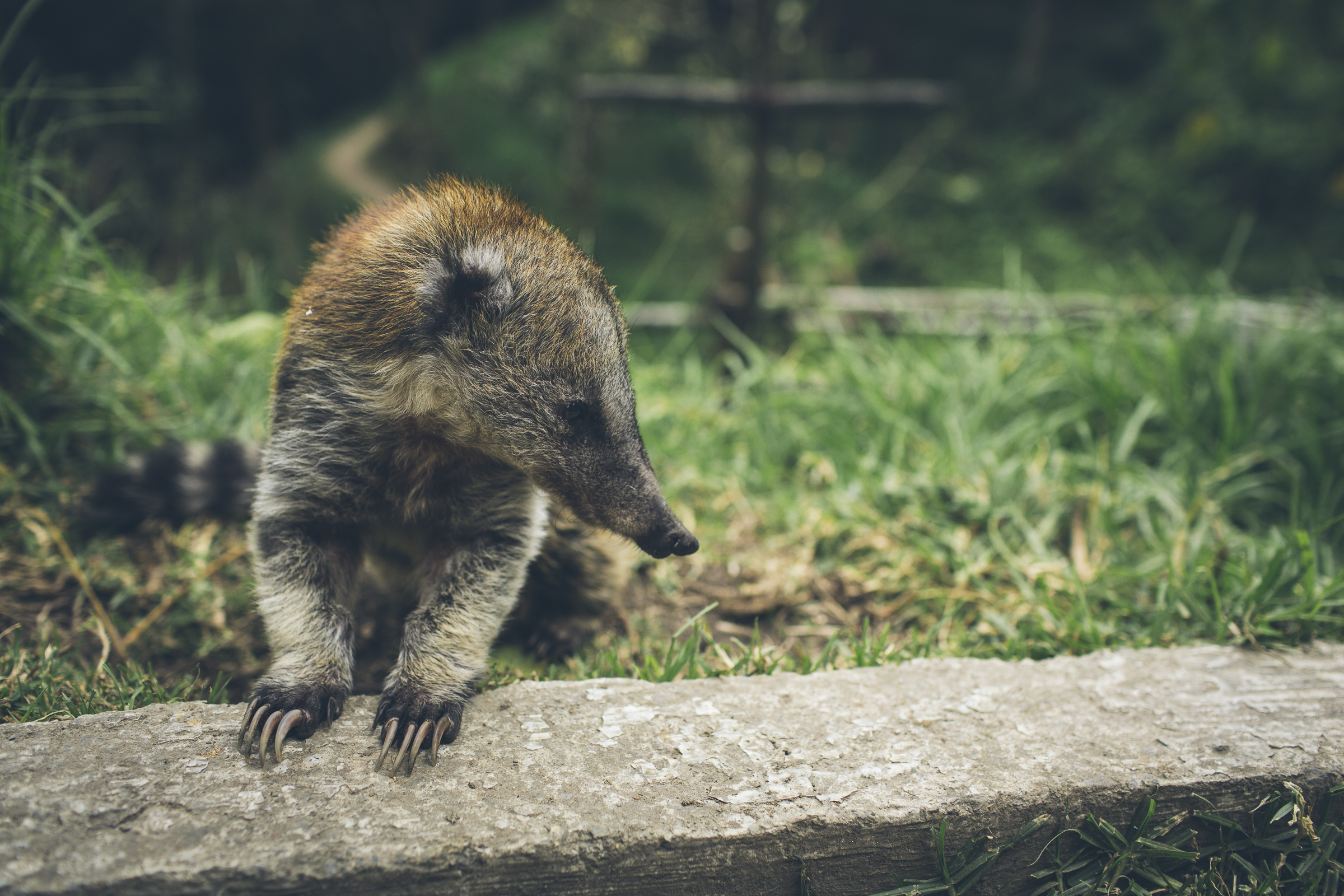 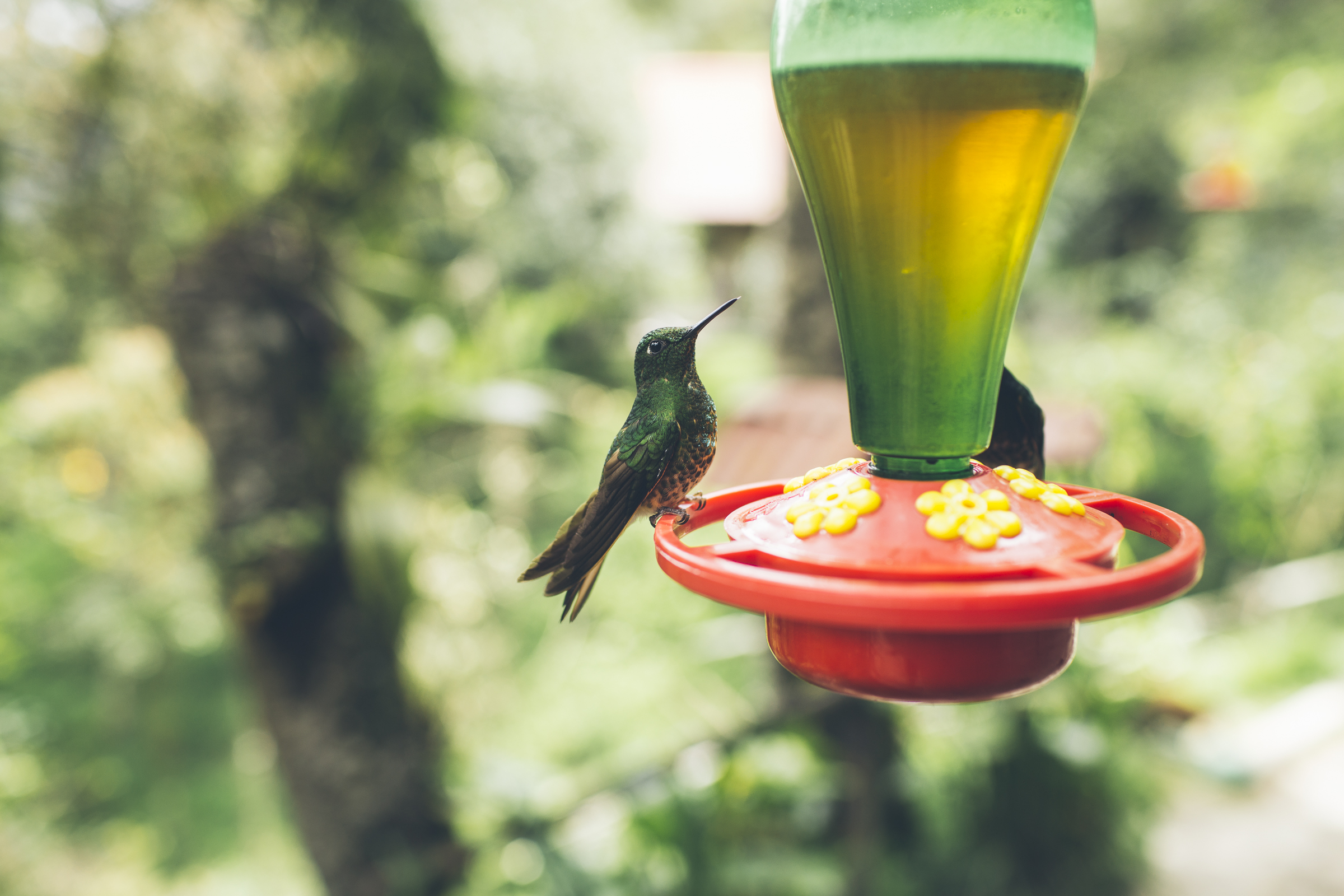 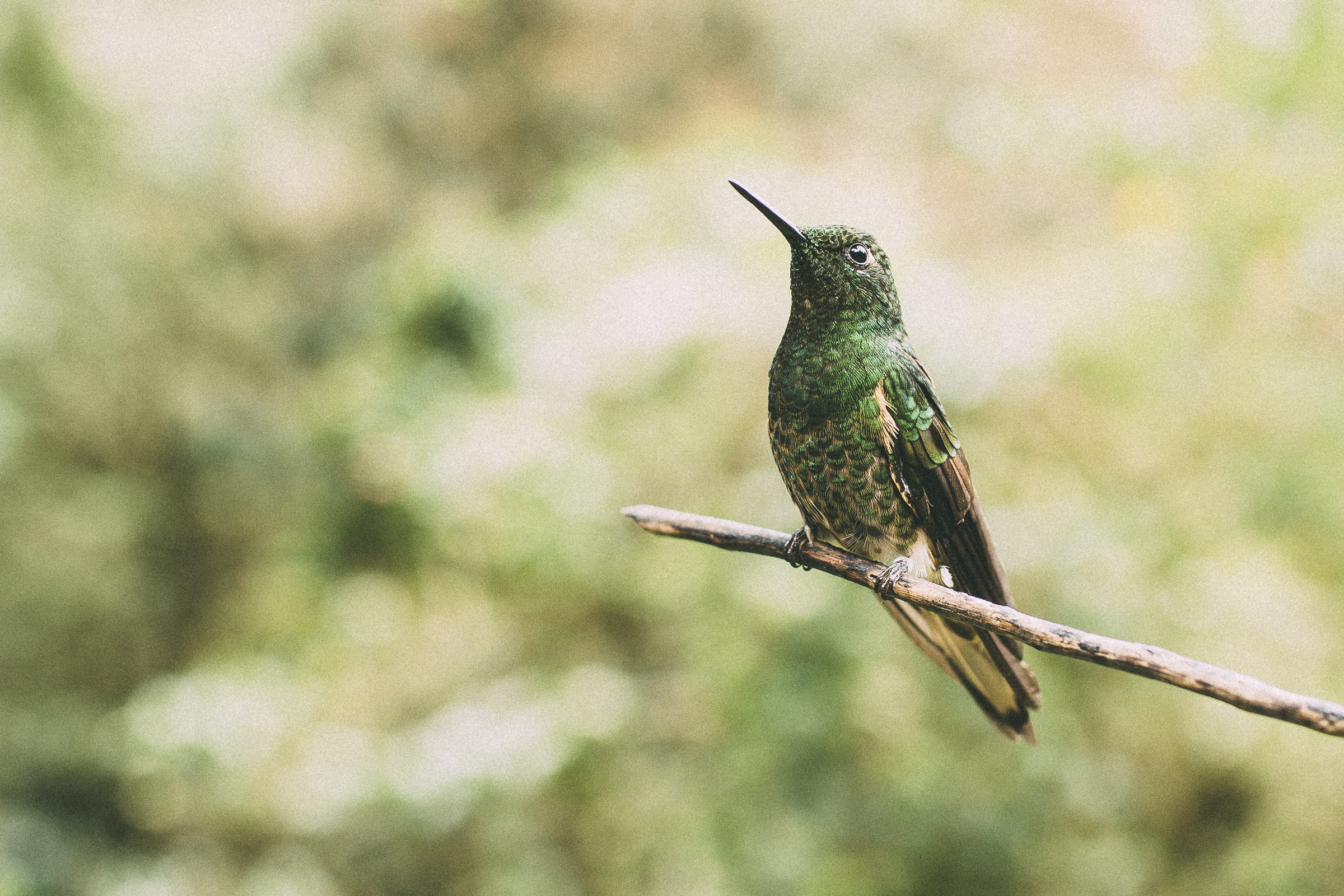 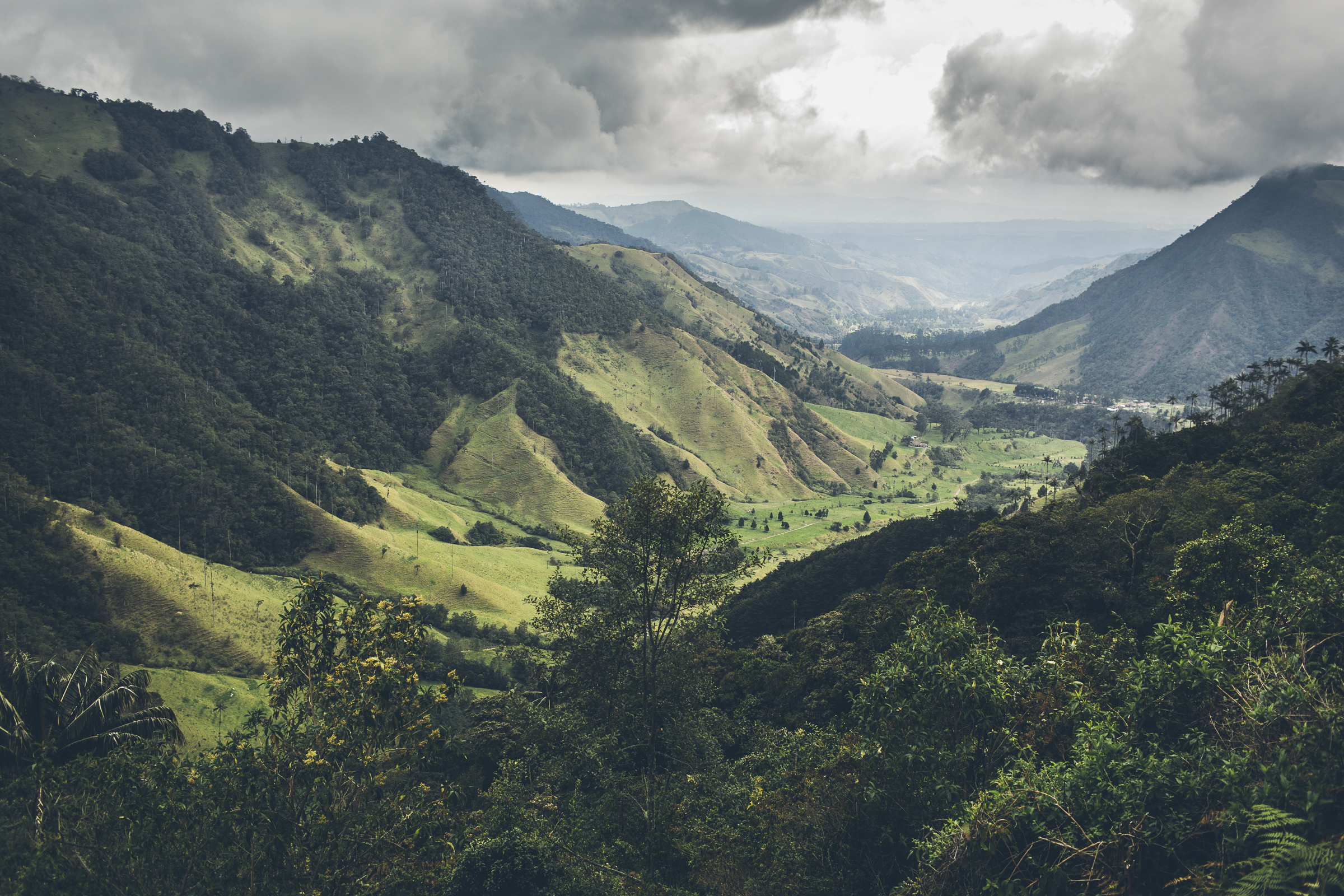 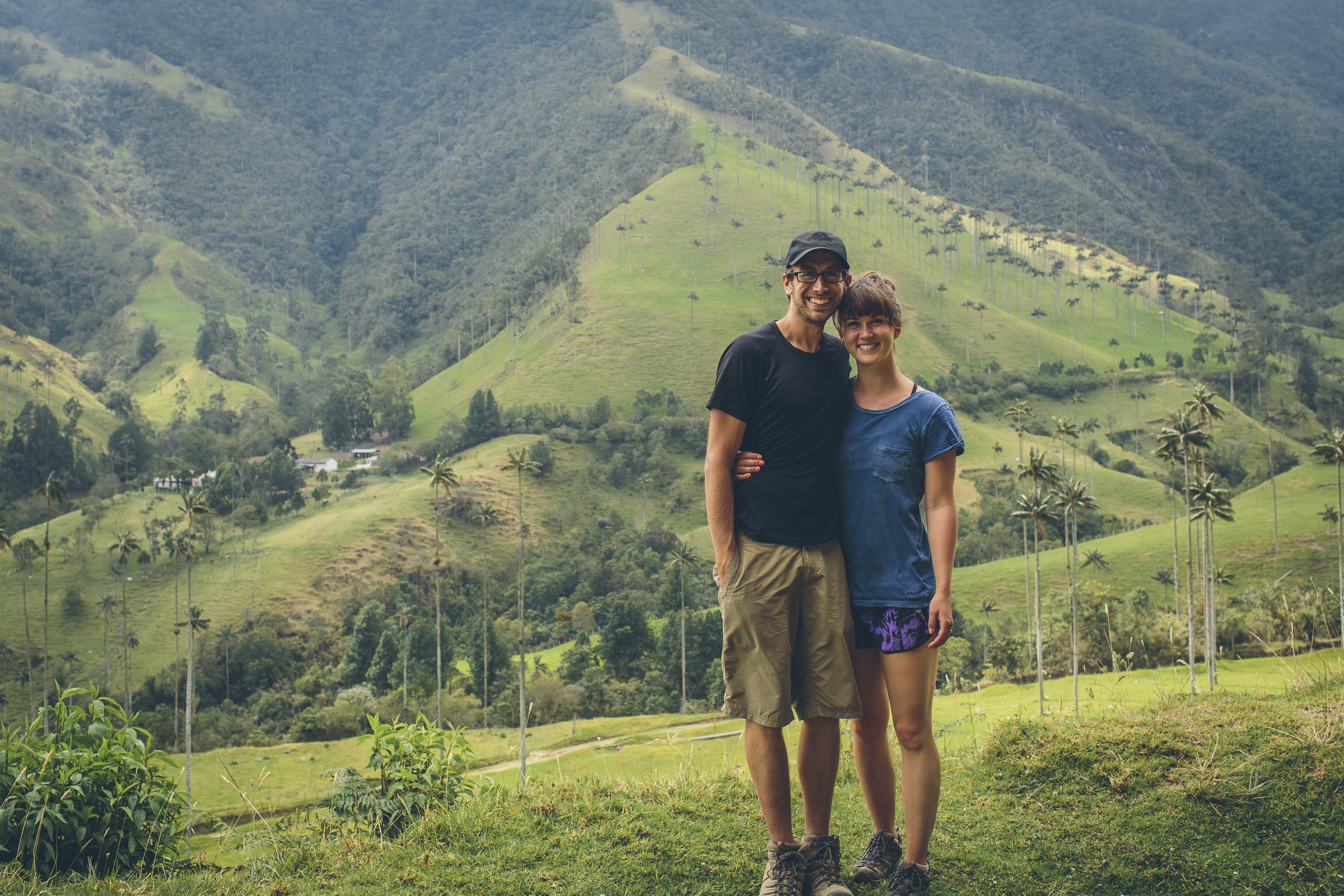 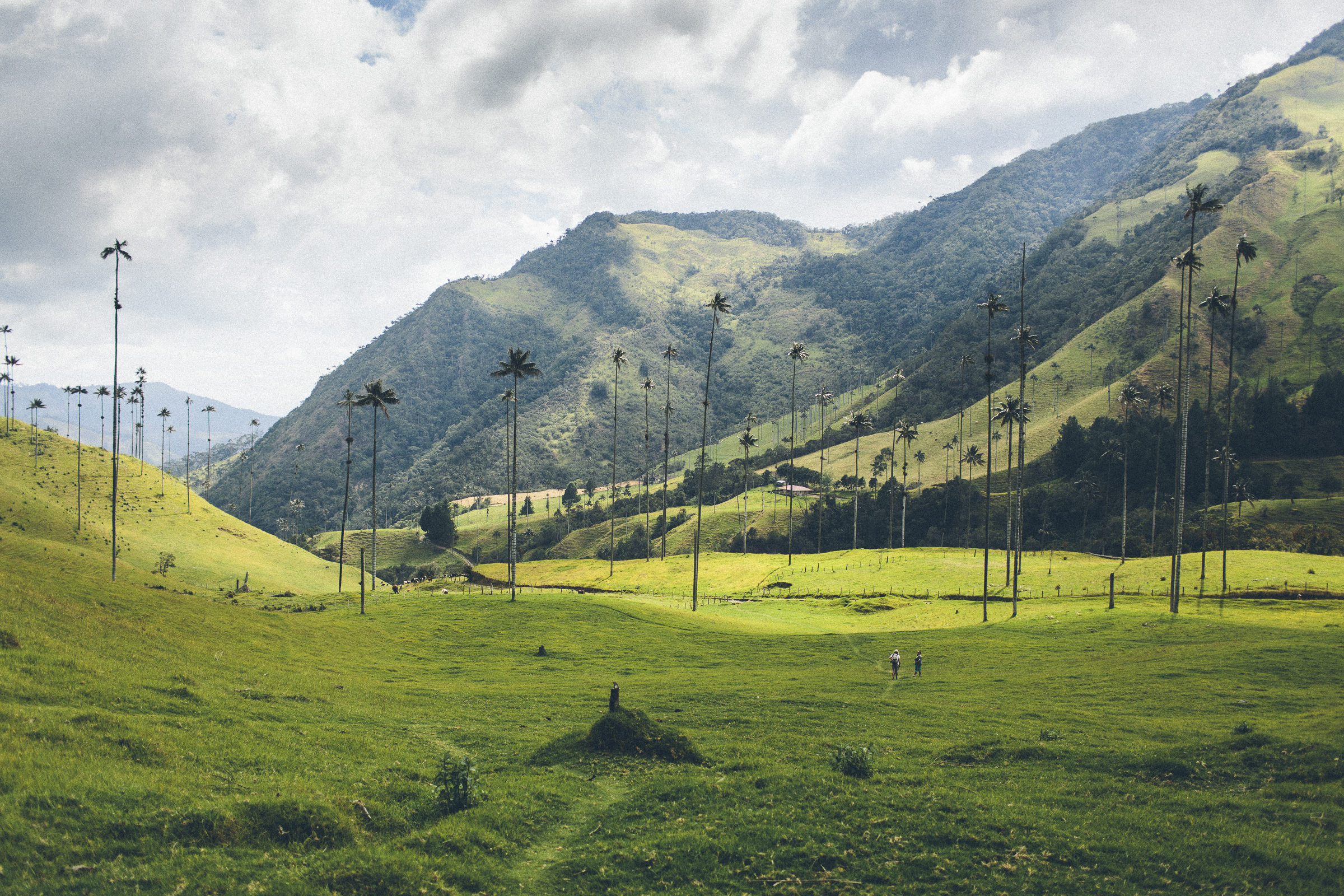 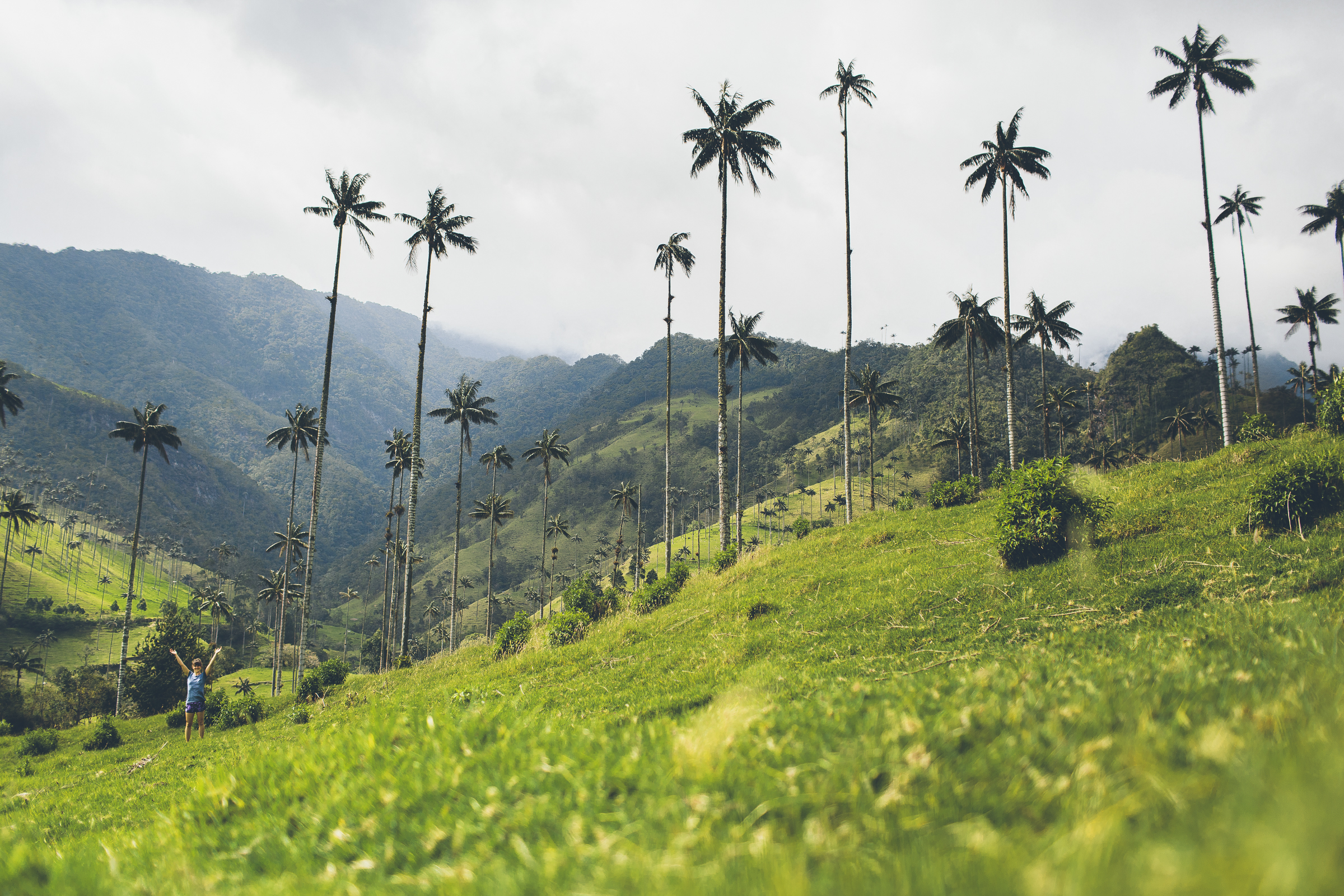 Eventually we finished up the hike though a forest of wax palms, headed back to Salento, and enjoyed a plate of bandeja paisa.  This is Colombia’s pride and joy (and national dish), which usually consists of red beans, rice, ground beef, chorizo with lime, plantain, arepa, avocado, fried egg and a slice of cicharron (pork belly).  Historically the dish was enjoyed by local farmers as a means to provide them with enough energy to get through their working day.   This suited us just fine after a long day of hiking. 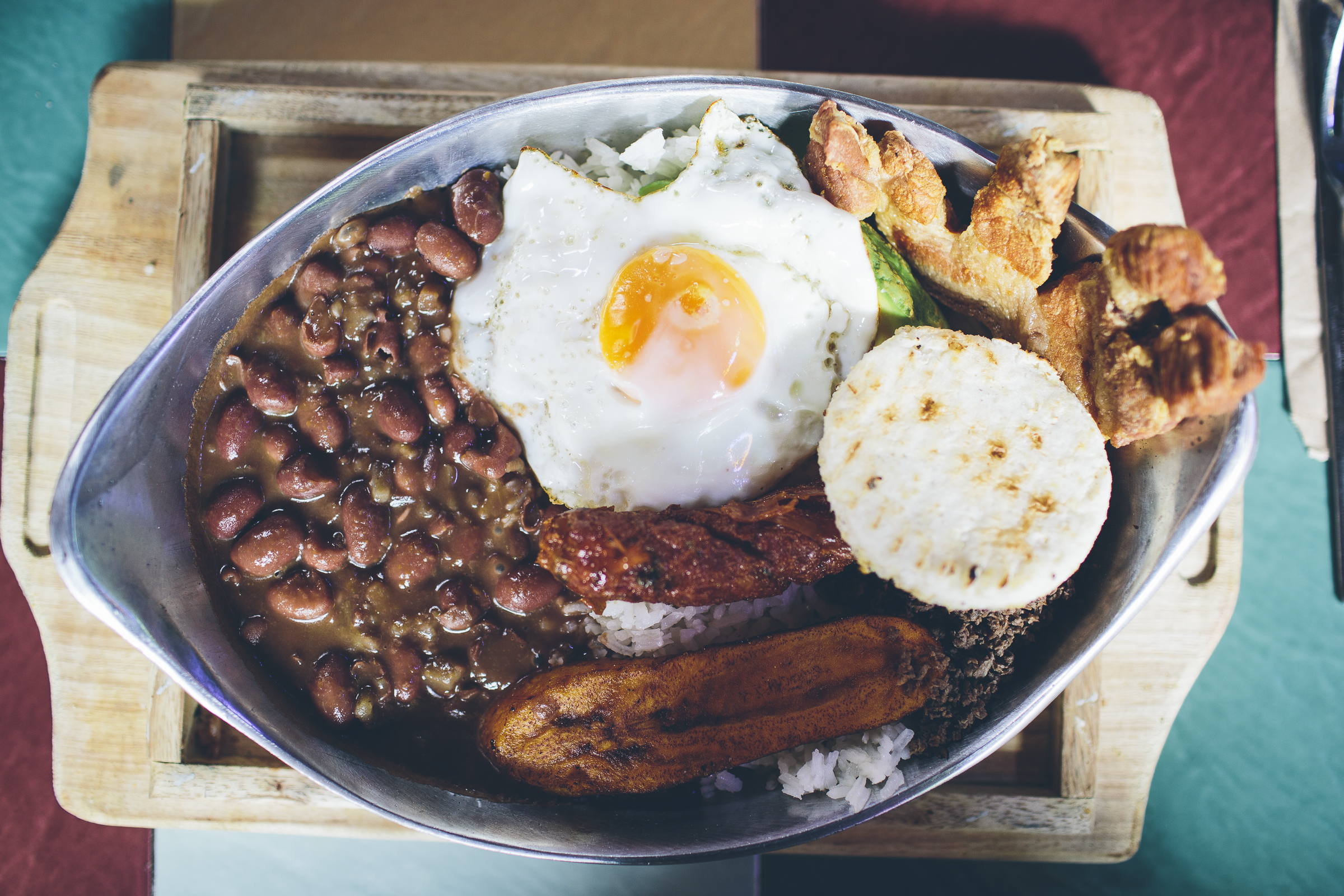 Finally, we met some fellow overlanders!!  After being on our own for quite some time and not meeting many fellow travelers, we met Leonie and Peter (Amsterdam to Anywhere), who rode their Honda CRF250Ls from Holland through Africa and then shipped to Argentina and are driving north to Canada.  We really enjoyed our time with these two chatting all about their ride through Africa and South America. They are some of the kindest people we’ve met on the road.  They passed off their extra maps, SIM cards, some Bolivian cash, and gave us suggestions for places to visit as we head further south. We missed their company as we parted ways and headed out of Salento, our tires pointing south and theirs pointing north.  During our stay at La Serrana we also met a friendly German couple driving an epic Unimog, which you can see below. 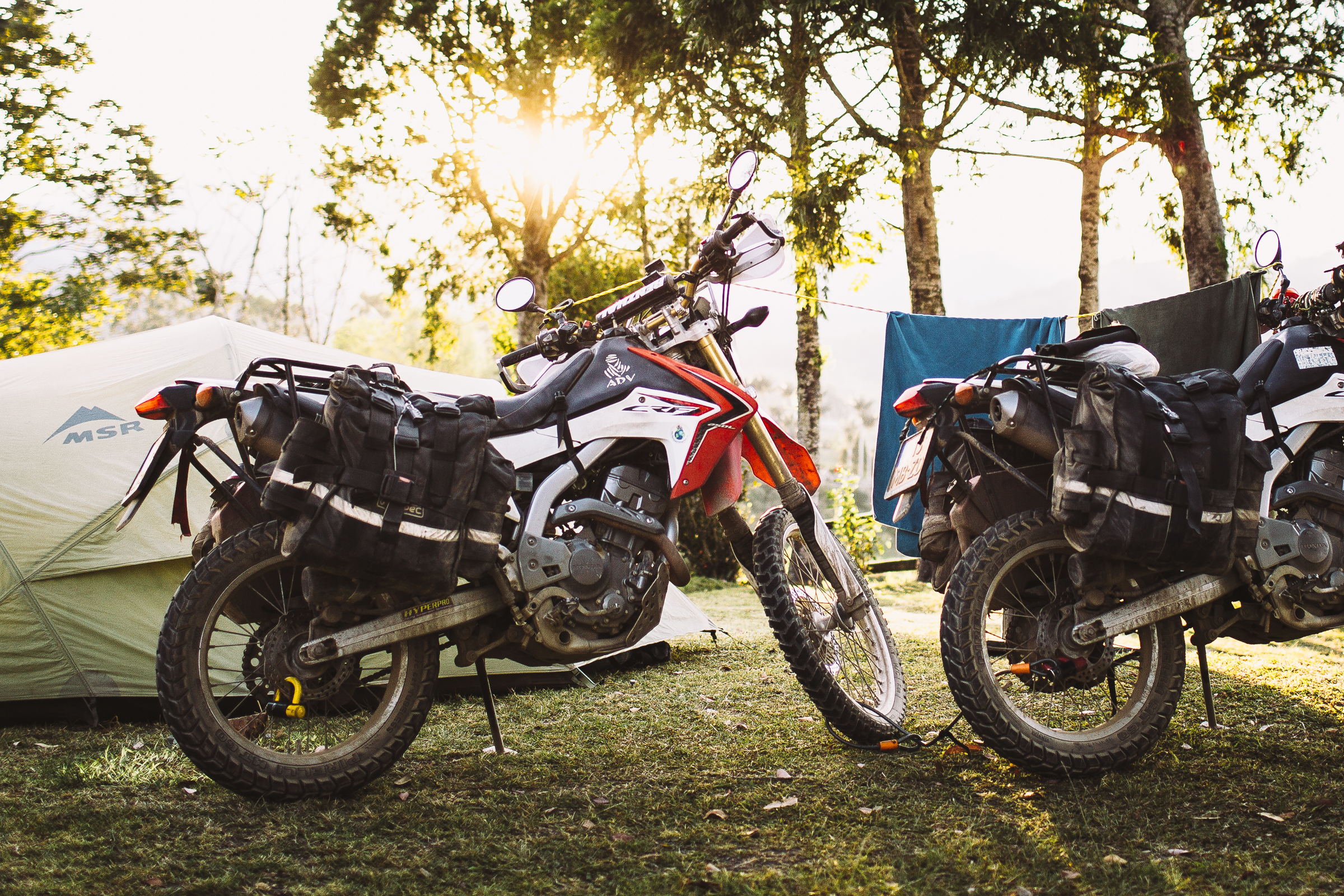 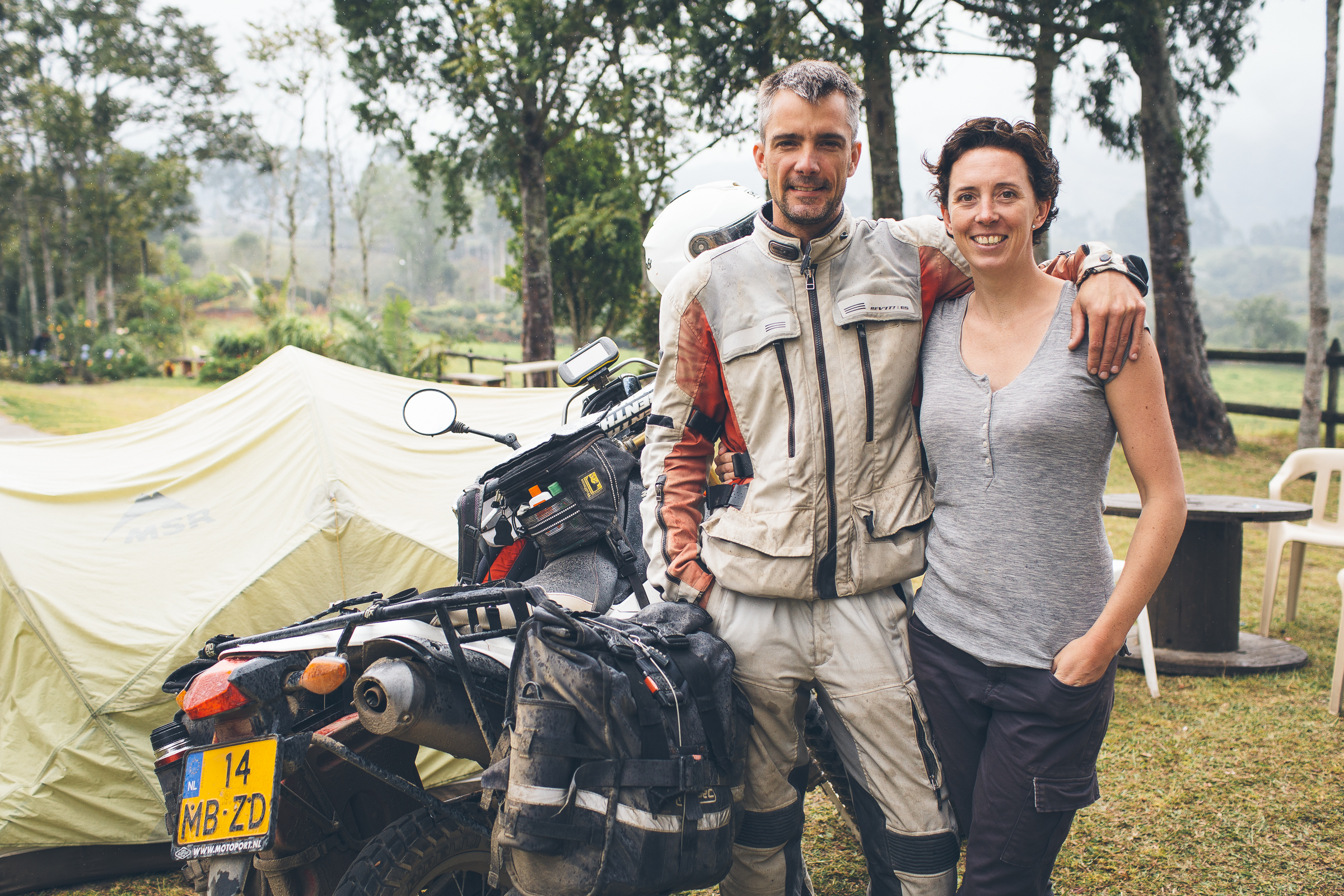 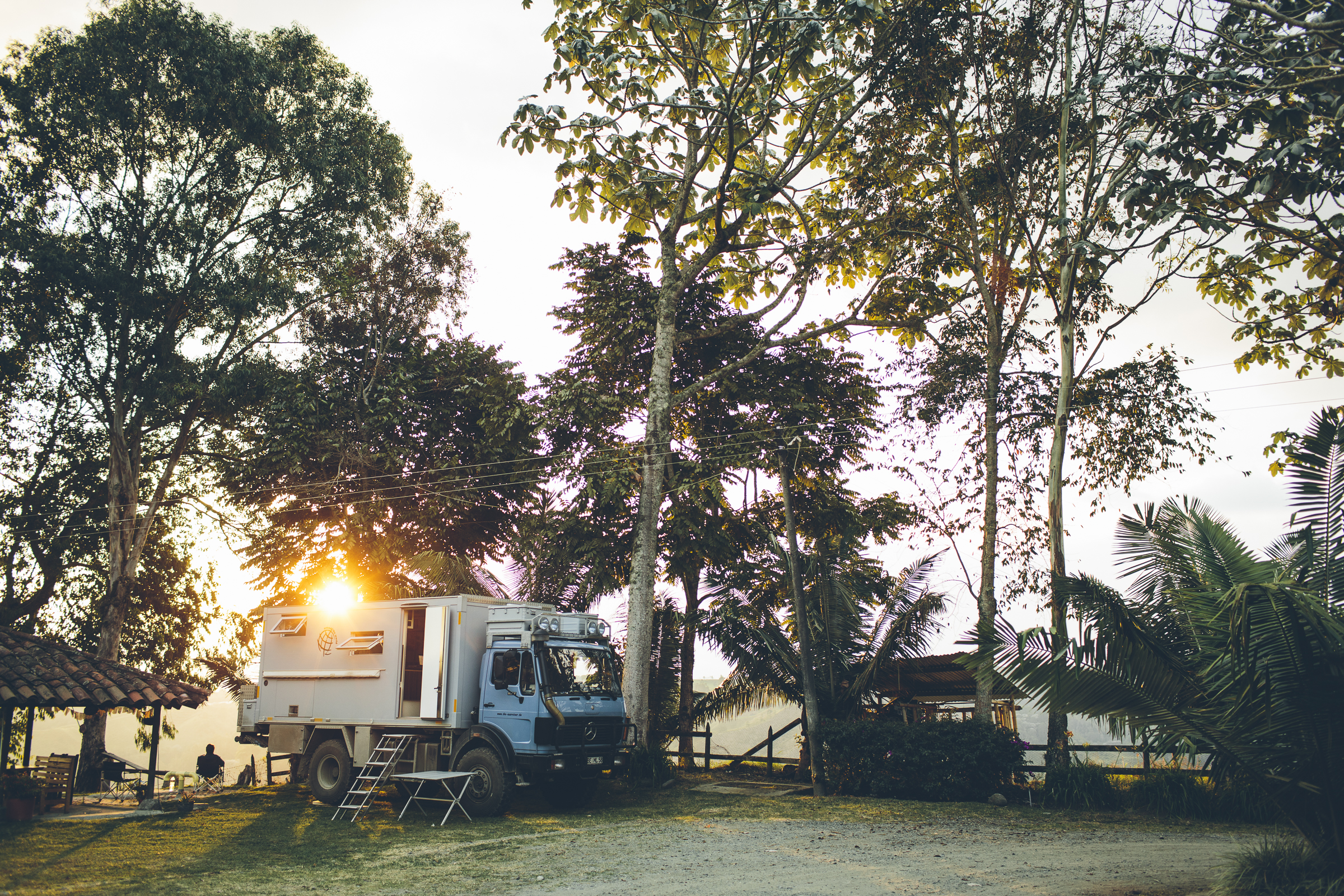 One final note on the roads in Colombia: they are steep, curvy, and slow-going.  We spent a lot of time in first gear crawling up steep mountain passes behind these big trucks.  Hours were spent travelling at less than 20km/h with views like the one below, while we wound our windows up to escape the black exhaust puking out from the vehicles ahead of us.  The scenery more than made up for it though, as we zig-zagged our way up and down the mountainside and into the southern region of Colombia. 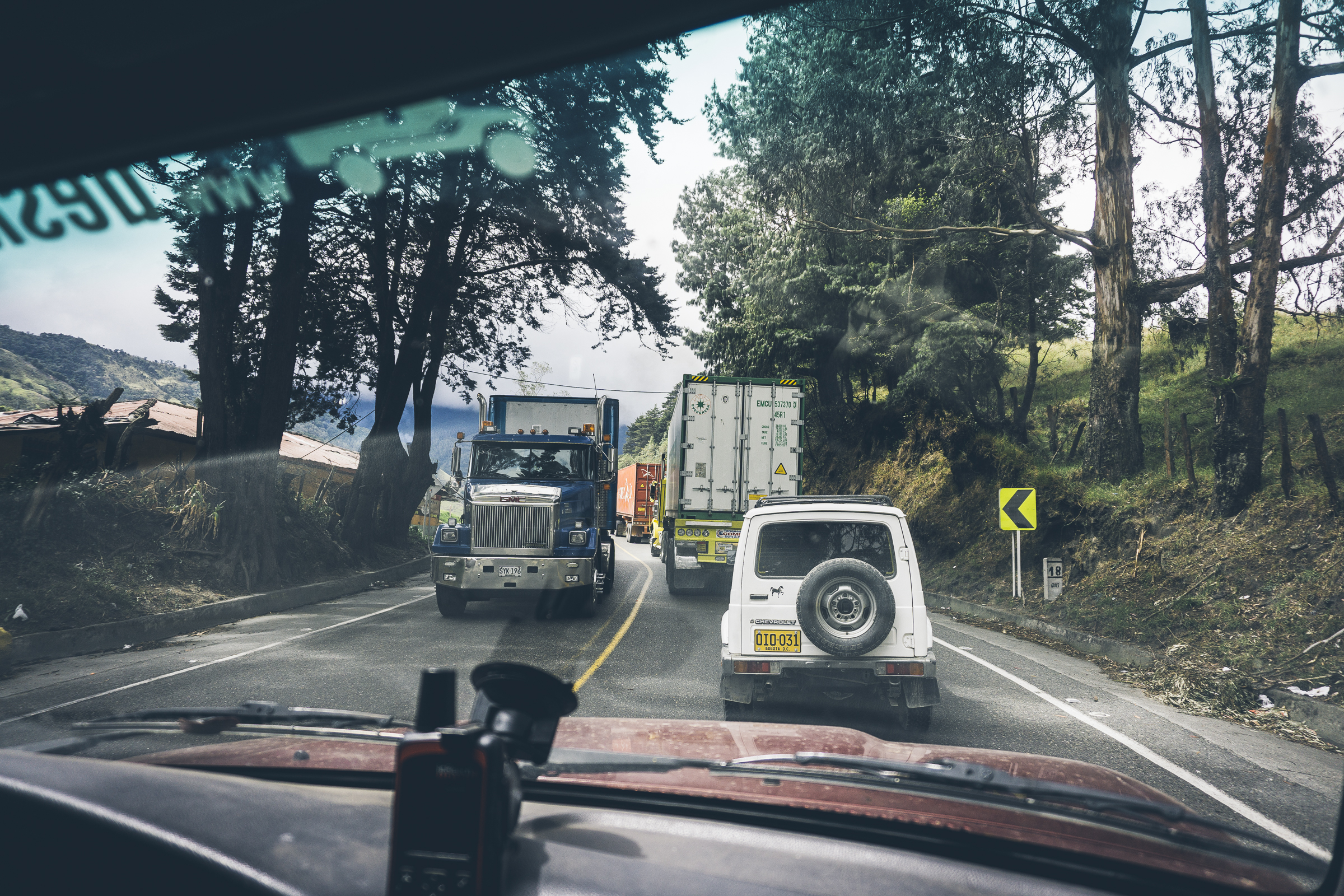