After negotiating a rate for some sweet Bolivian gasoline and subsequently filling our tanks, it was time for us to leave the city of La Paz and find some fresh air and freedom.  Chris and Mallary joined us for a mini convoy to Sajama National Park.  Sajama turned out to be a culmination of everything we love: beautiful landscapes, a little bit of off-roading, and wide open spaces devoid of people other than some close friends to share it with.

But first– camping in a deserted children’s playground en route to our destination. 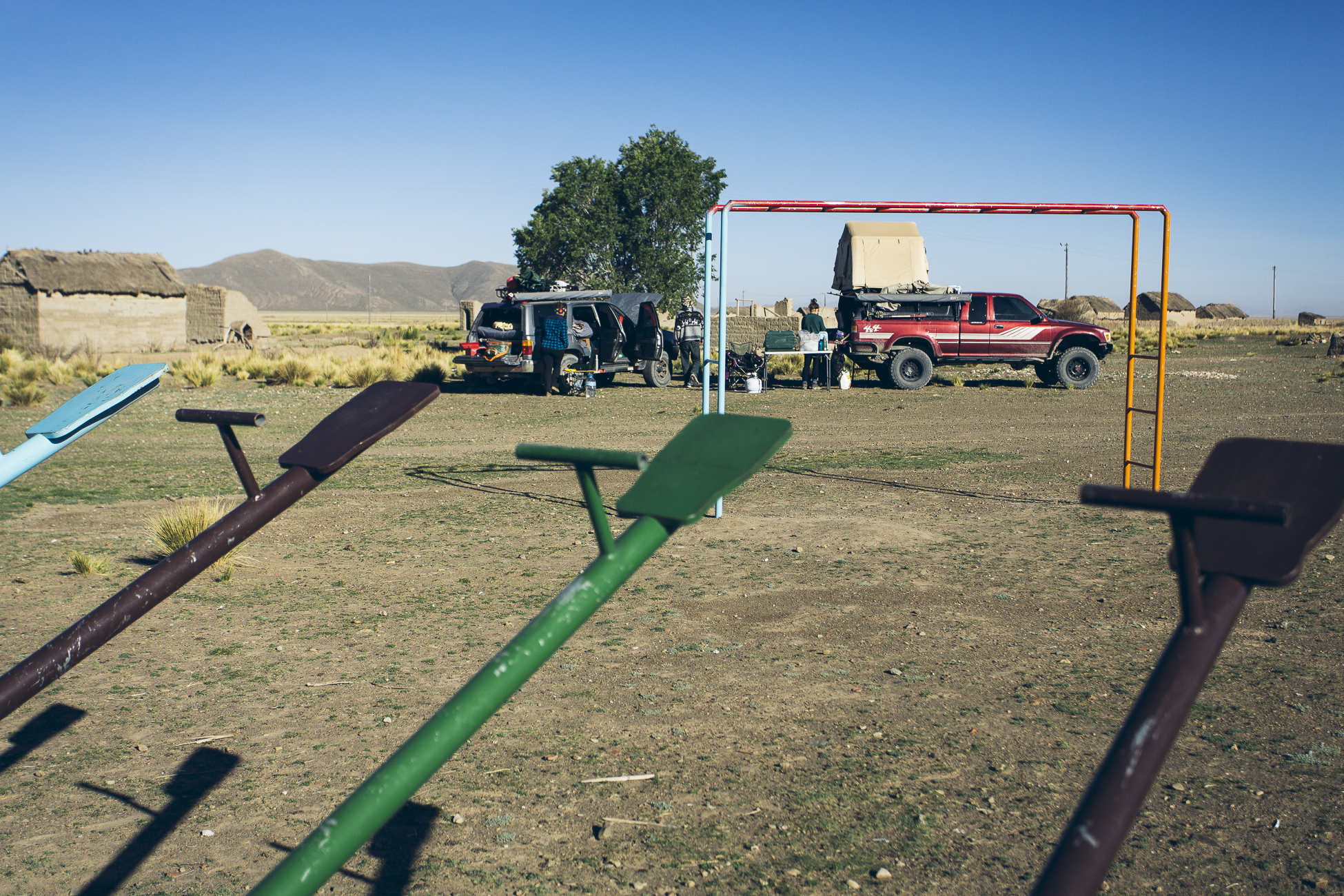 As we were packing up to leave the next morning a tiny wrinkled Boliviano woman wandered over to us, eager to start a conversation.  She talked about the types of crops that she grew (quinoa and potatoes), asked us questions about our trip, and told us about her children and husband.  Suddenly she became very emotional, tears filling her brown eyes while telling us about how her husband became sick and since then she had to bear the brunt of the responsibility regarding her household and family-owned farmland.  All of her children had moved away and she was alone.  We all kind of looked at each other and shifted around awkwardly, patting her on the shoulder as she spoke to us between quiet sobs.  We weren’t sure what the etiquette was in remote Bolivia… a bear hug?  By the end of the conversation she cheered up and went on her way, and we were happy to see her smiling once again.

A big group of school children came by and started swinging on the monkey bars and playing, bright packsacks on their backs.  Their teacher walked up about 10 minutes later and in unison they all chimed, “Buenos dias, Professora!!”  We left the kids to their playground and their lessons and hit the road towards Sajama National Park. 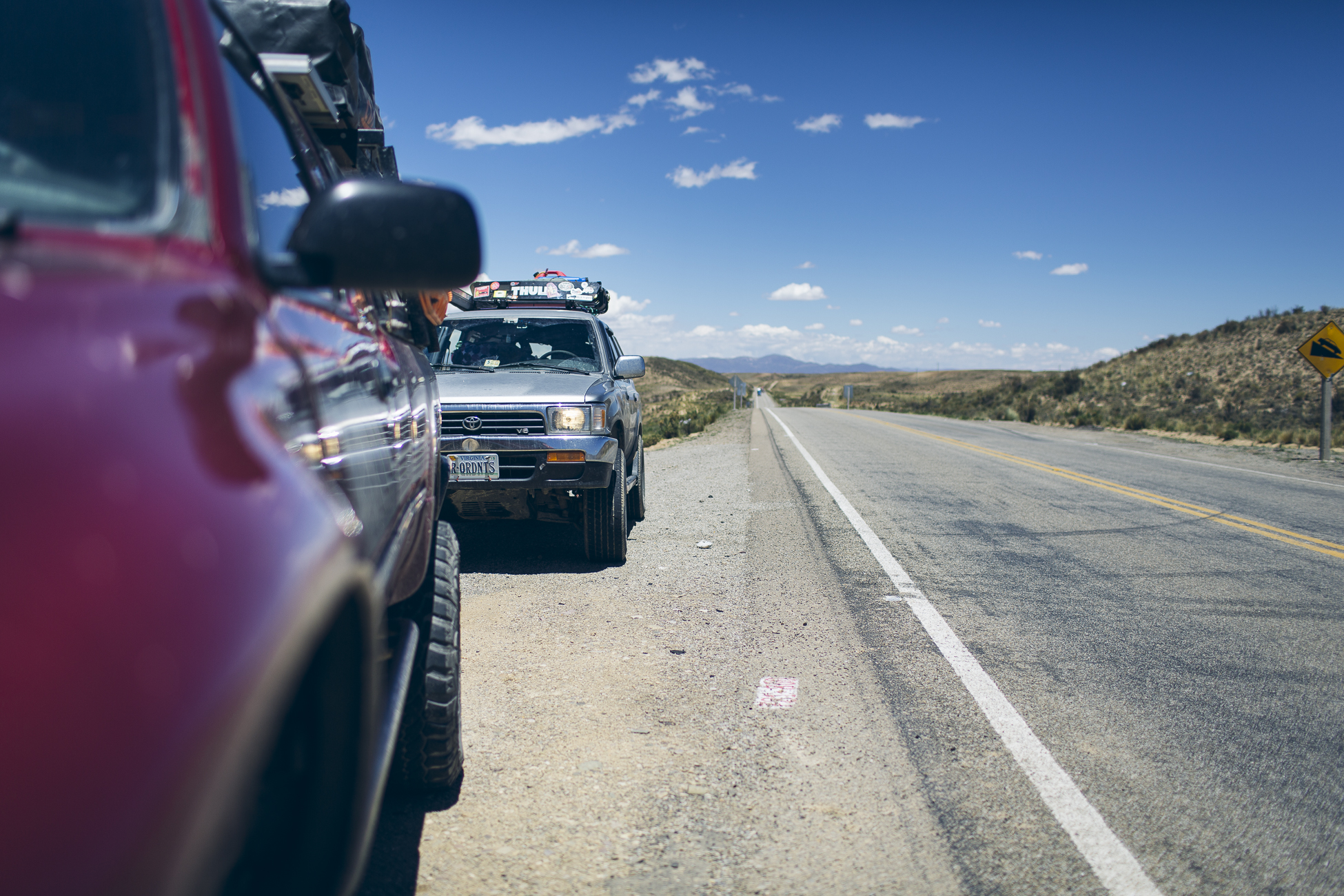 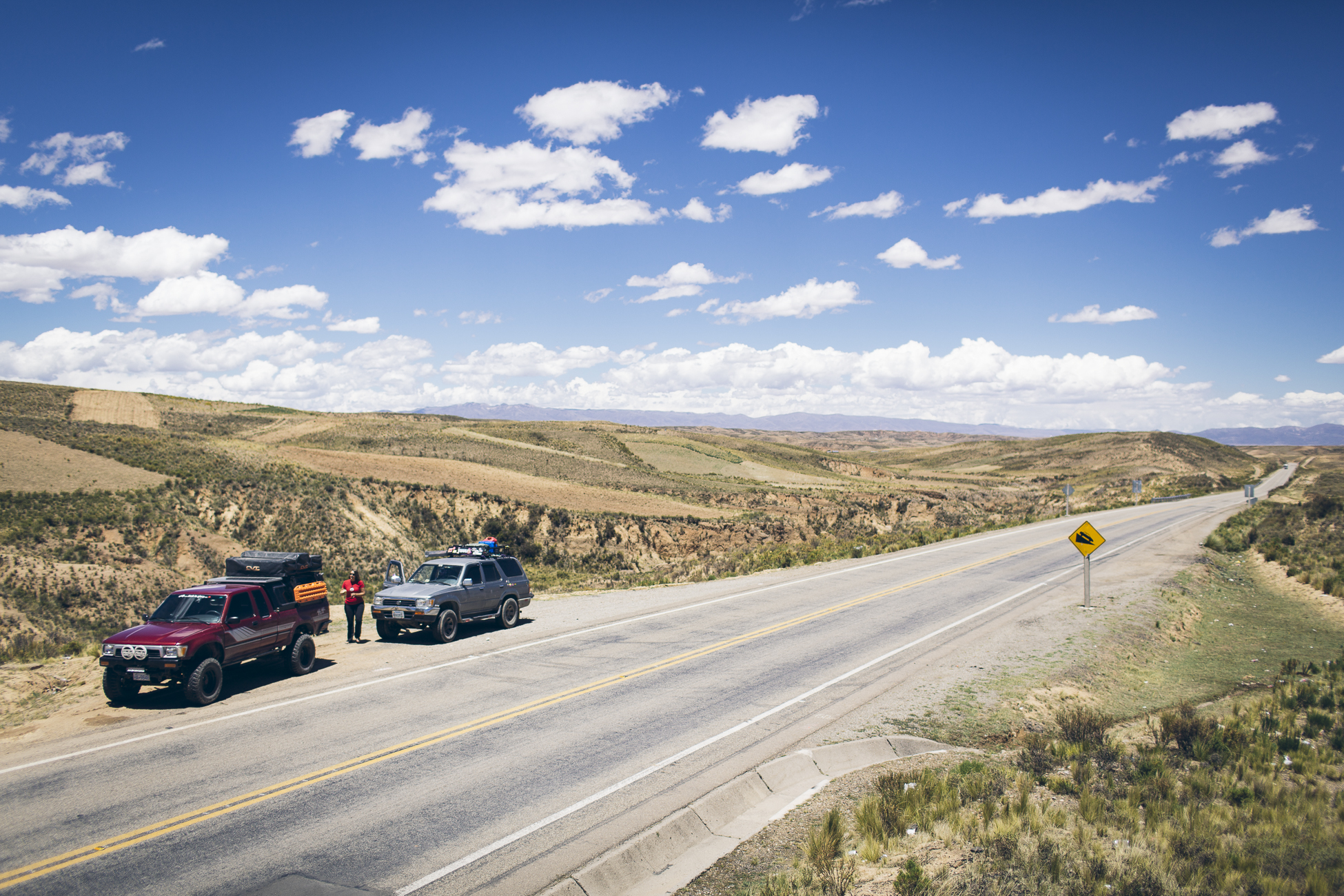 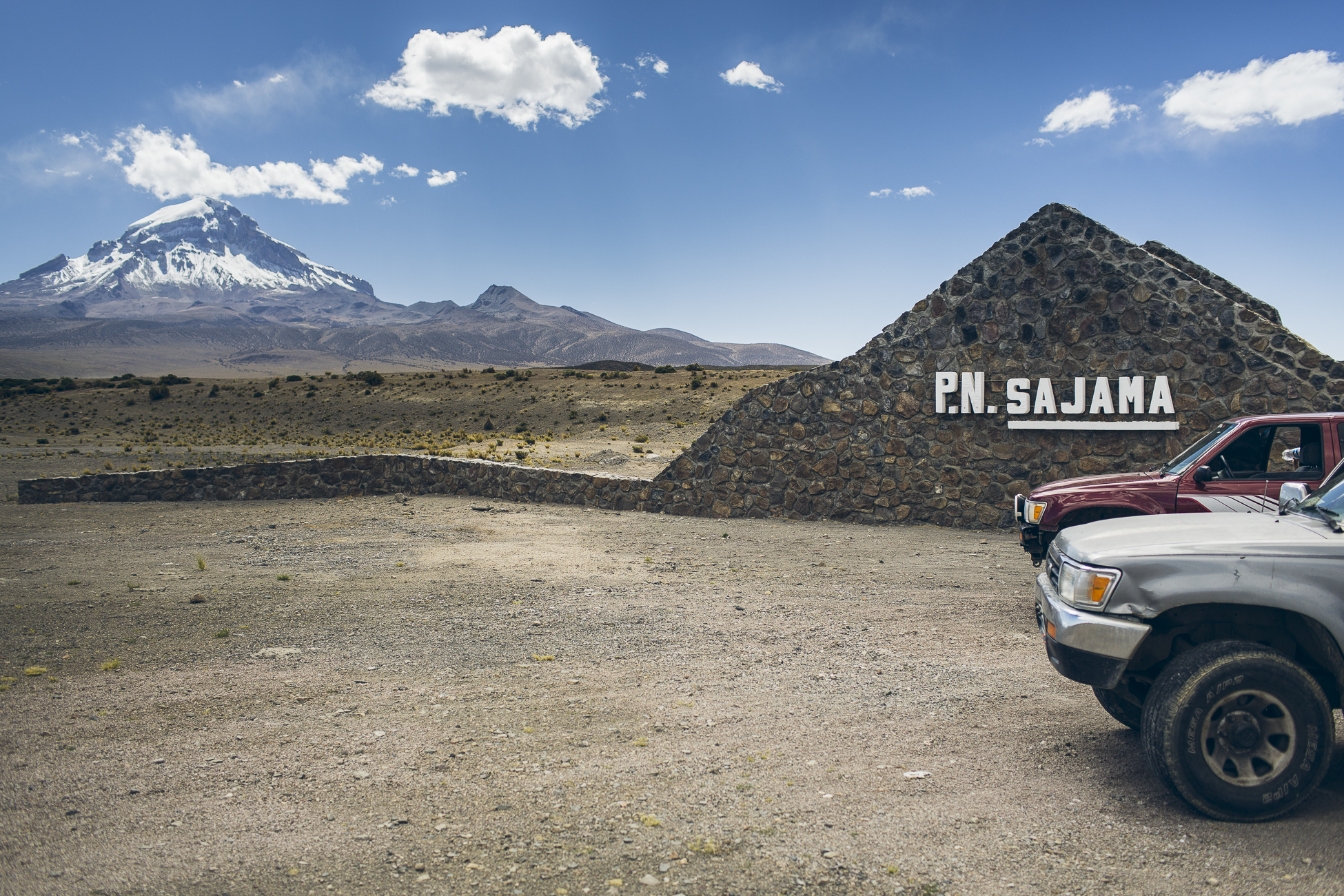 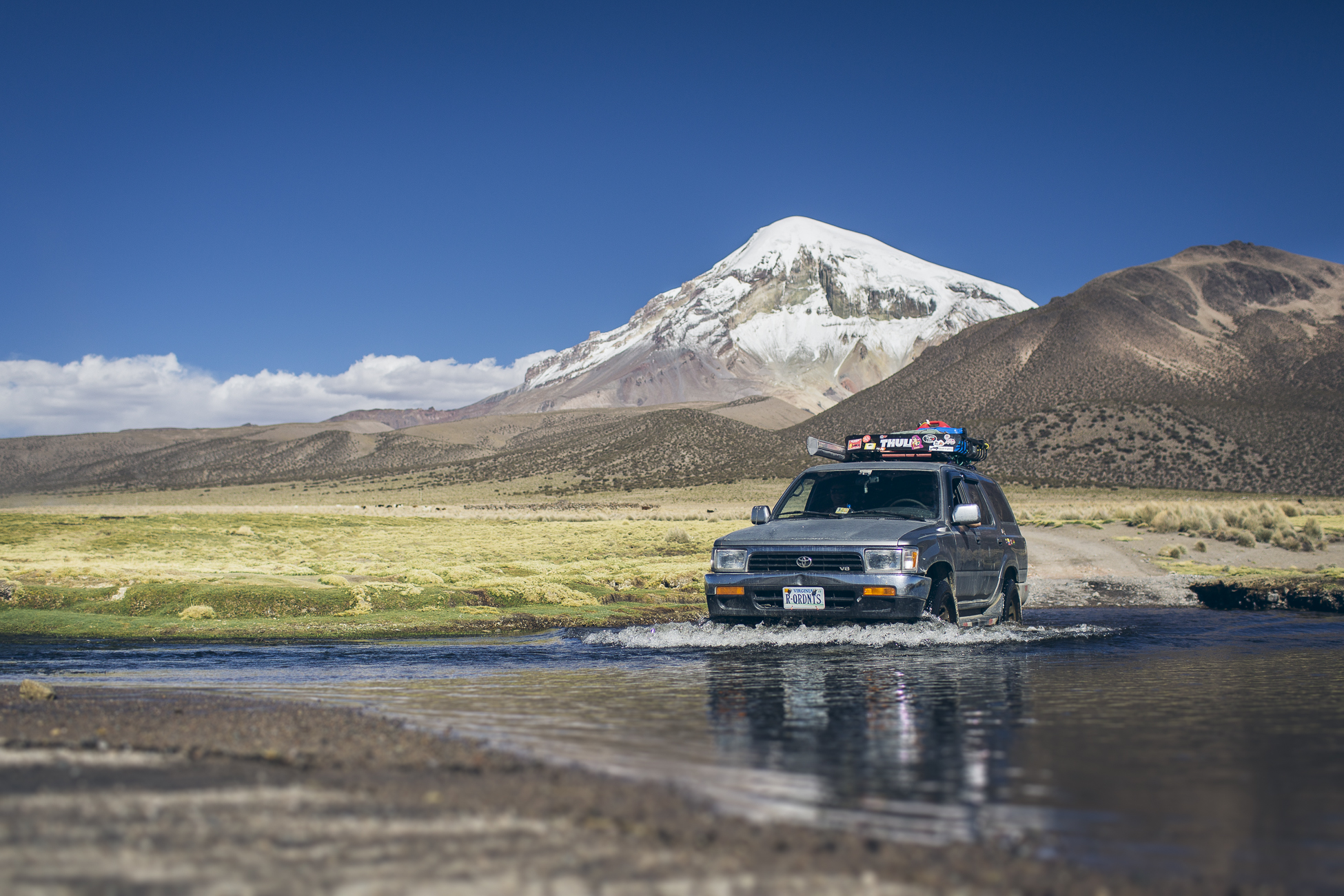 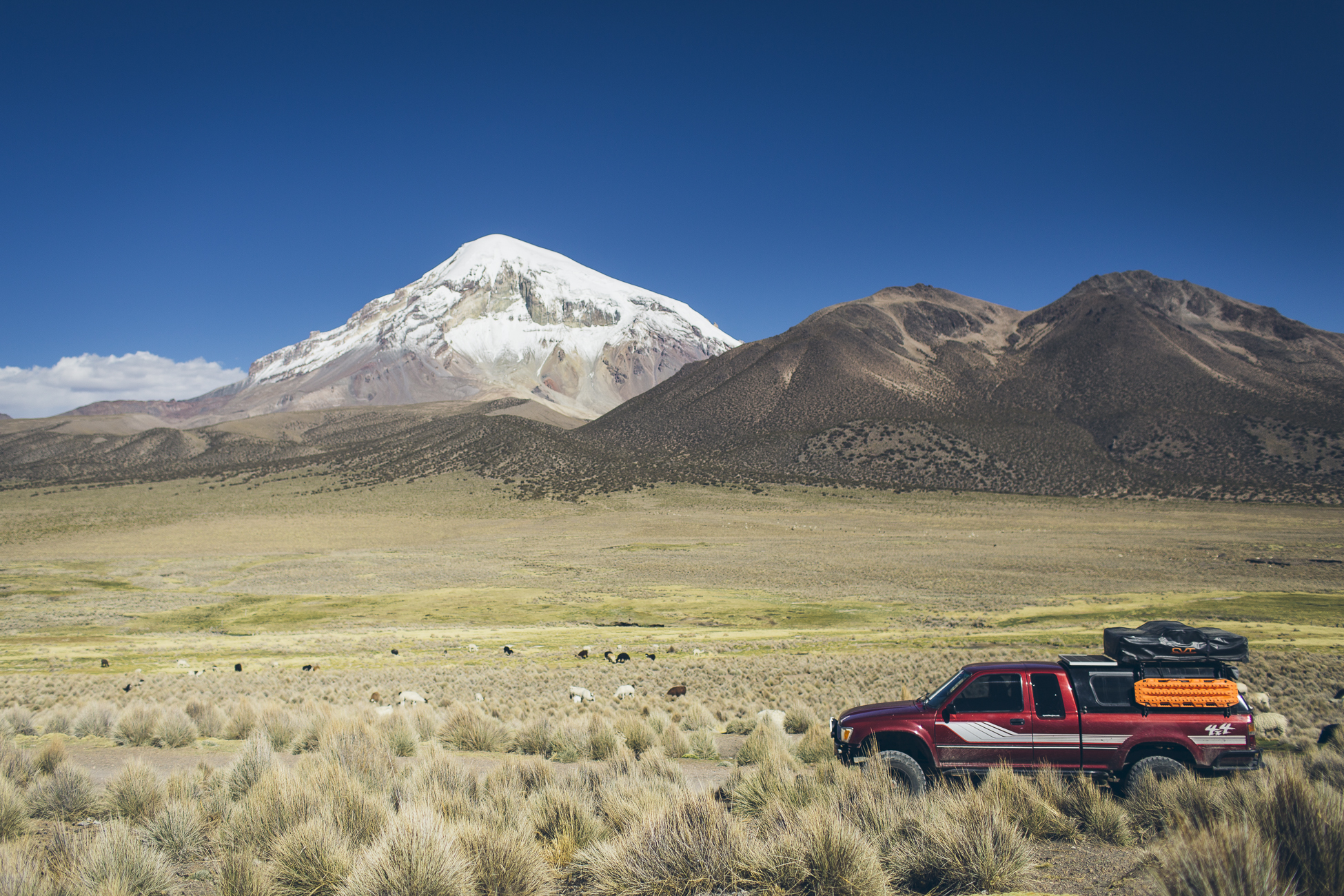 After setting up camp late in the afternoon we immediately filled a thermos with hot chocolate, packed a picnic, and walked up to the hot springs.  These thermal waters did not disappoint!  Actually, this moment stands out as one of our favourites so far.  There were absolutely zero tourists around aside from the ones we rode in with, the pools were cooking us like live lobsters (maybe the water was slightly cooler than that), and we had the best view imaginable of Nevado Sajama (the highest peak in Bolivia at 6,543 metres) as the sun set and turned everything deep purple.  Smoke on the water, fire in the sky.  We love the altiplano. 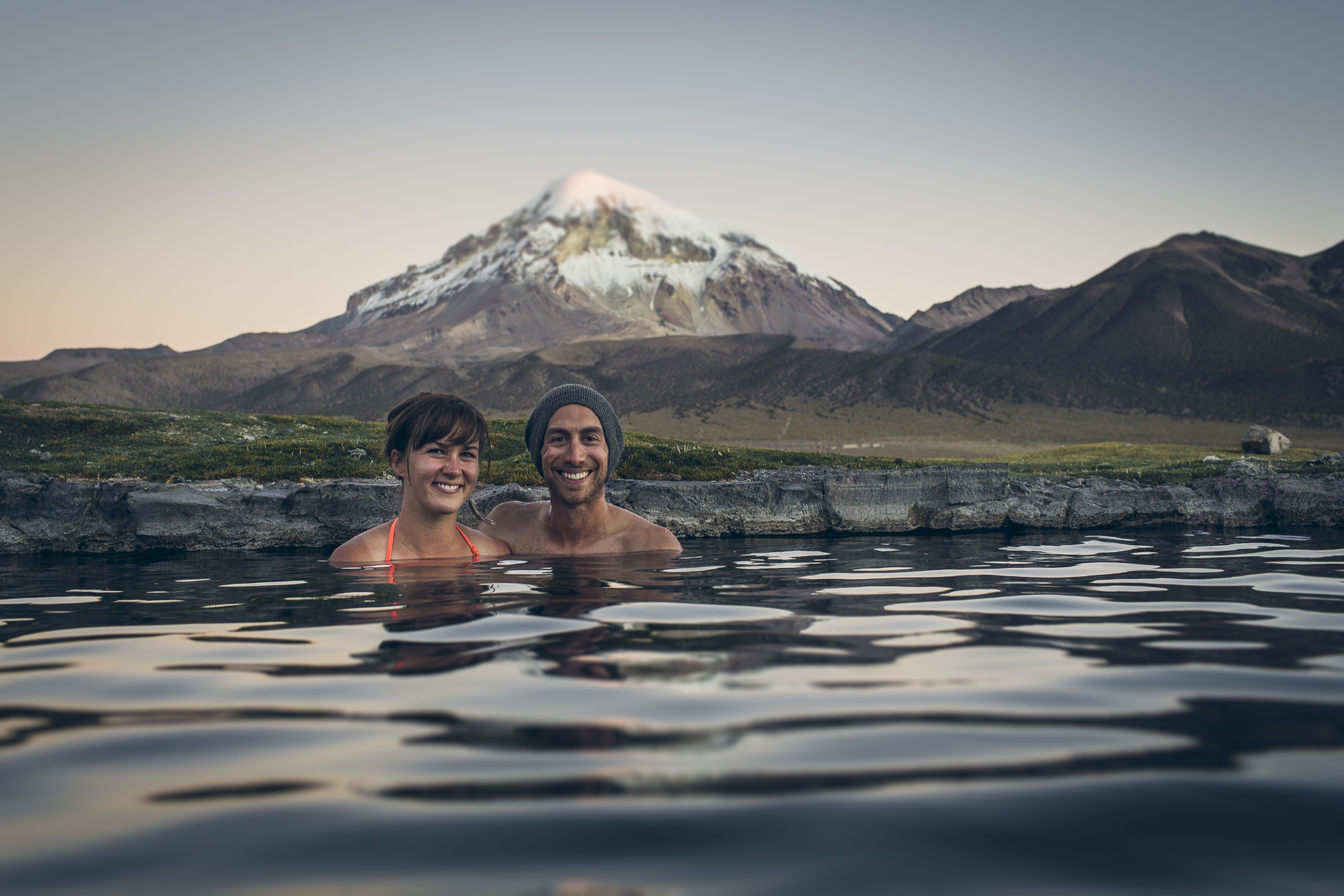 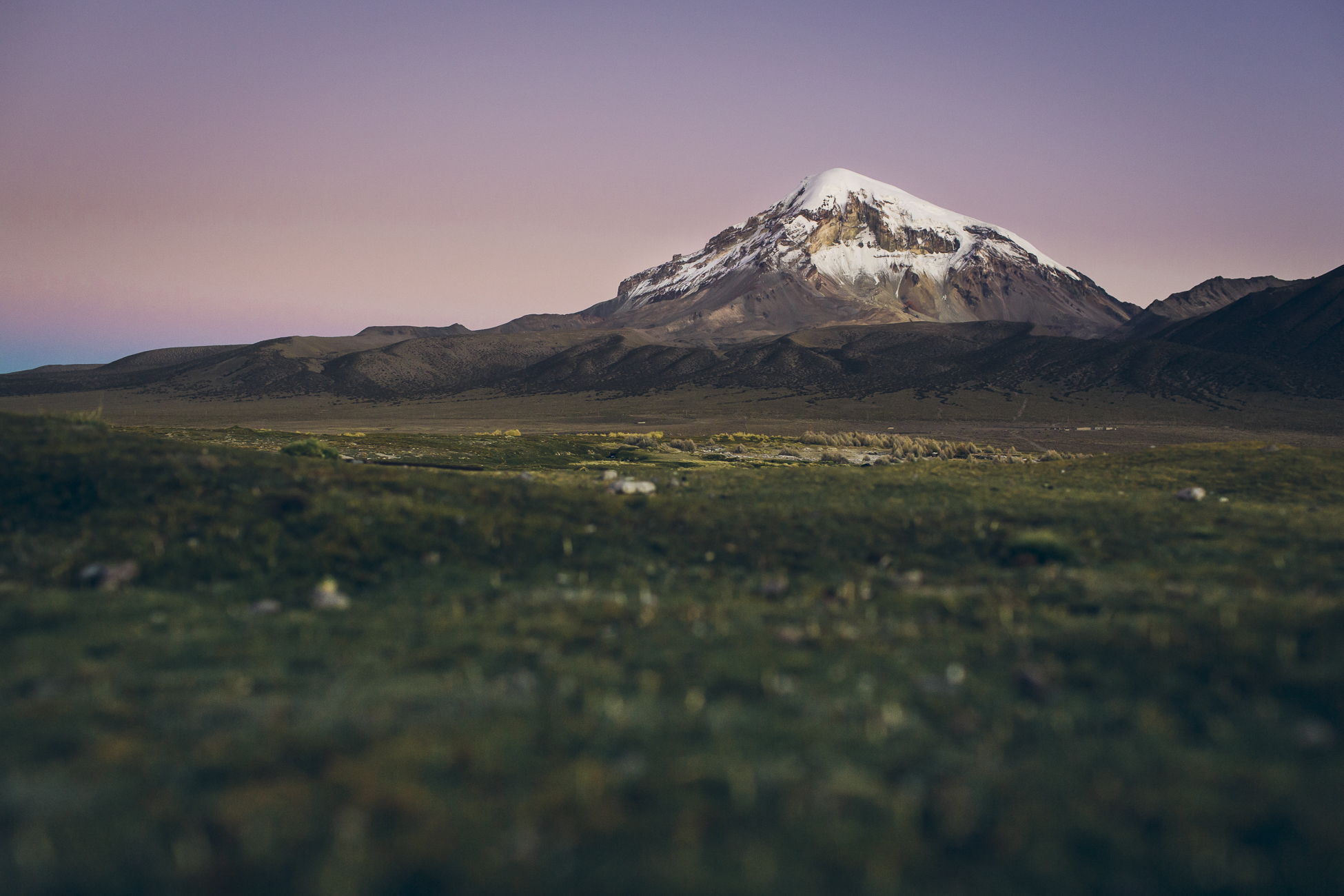 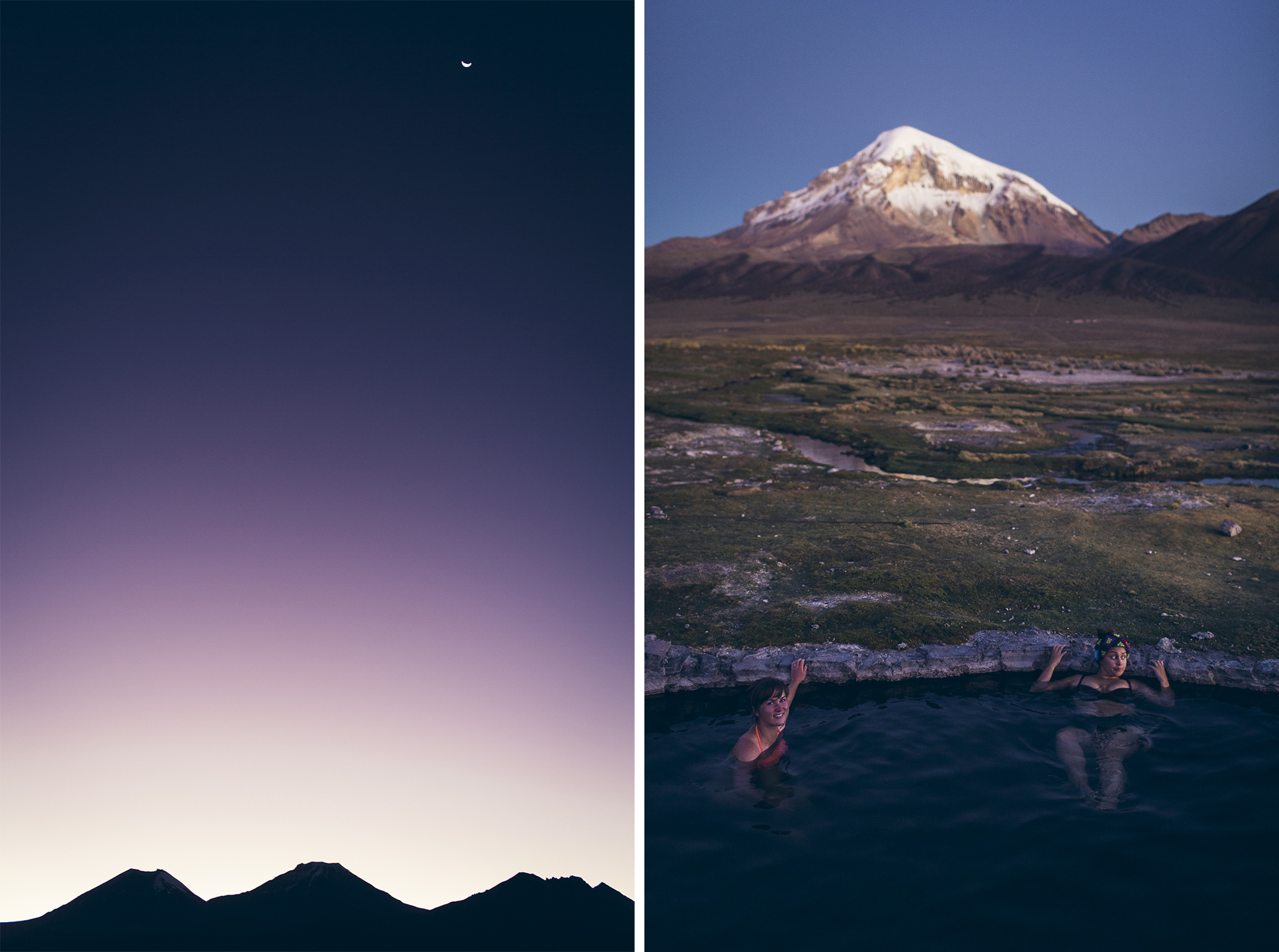 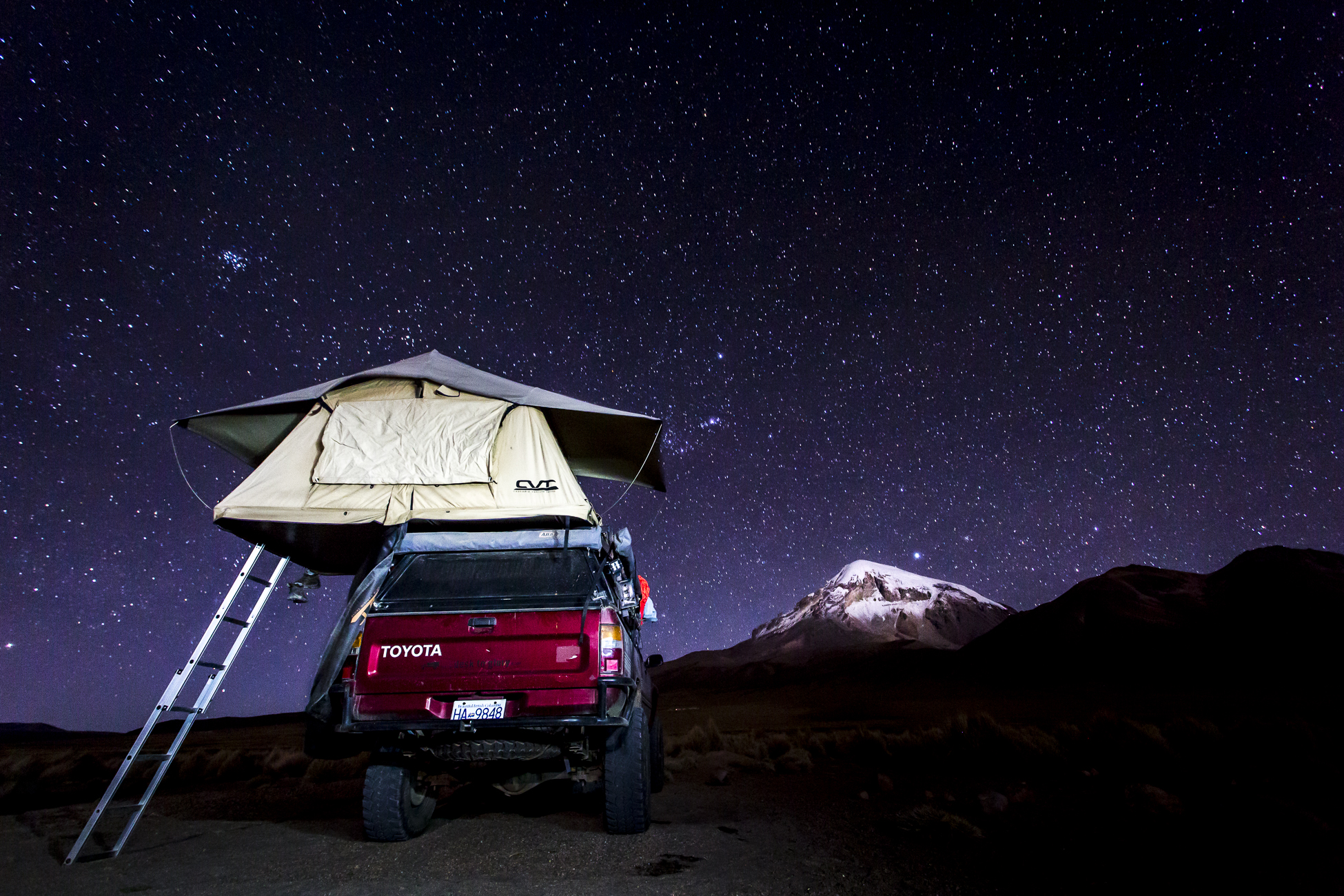 The following day we woke up to the sunrise while dozens of hungry llamas surrounded the trucks as they snacked on breakfast.  Could it get any better? 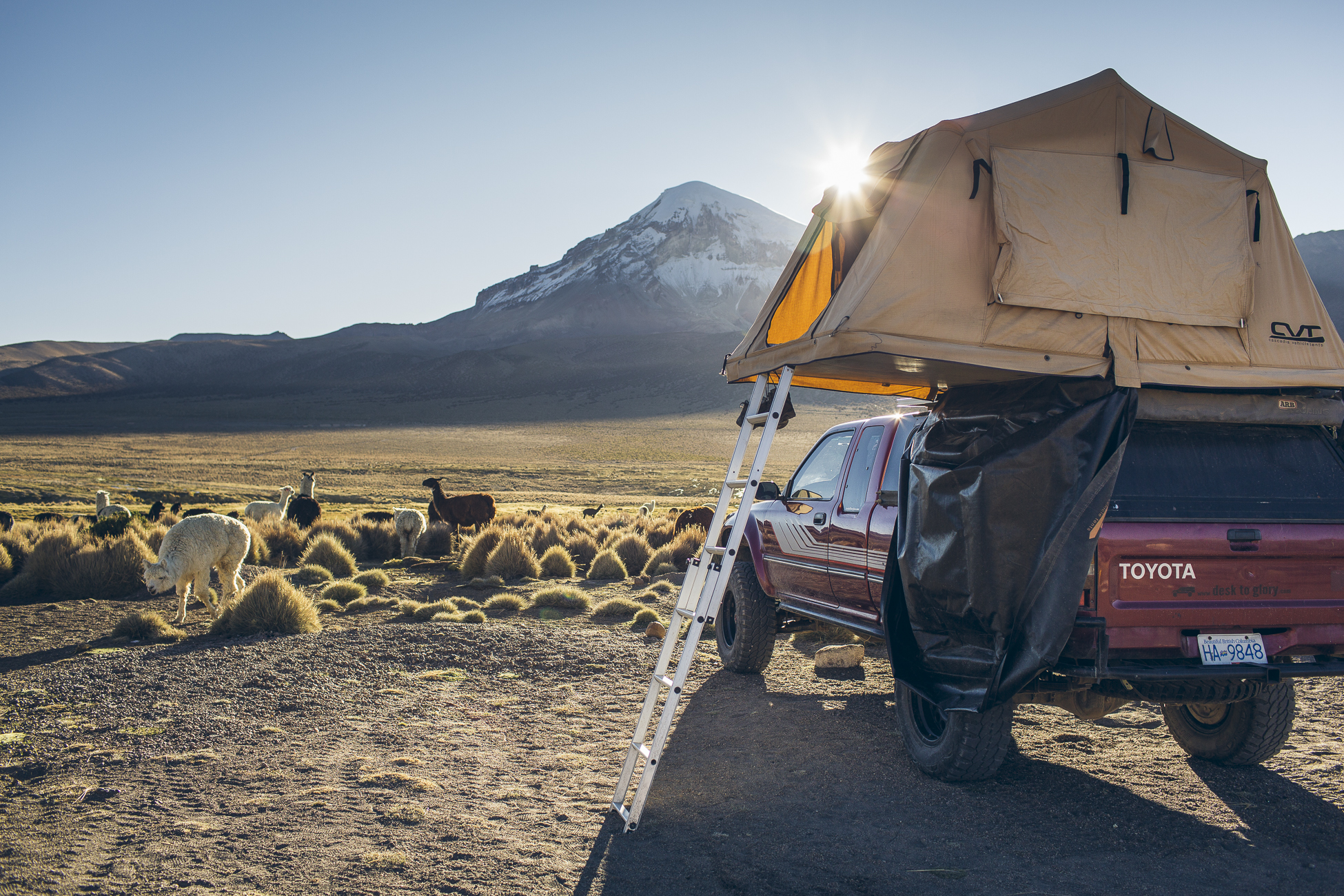 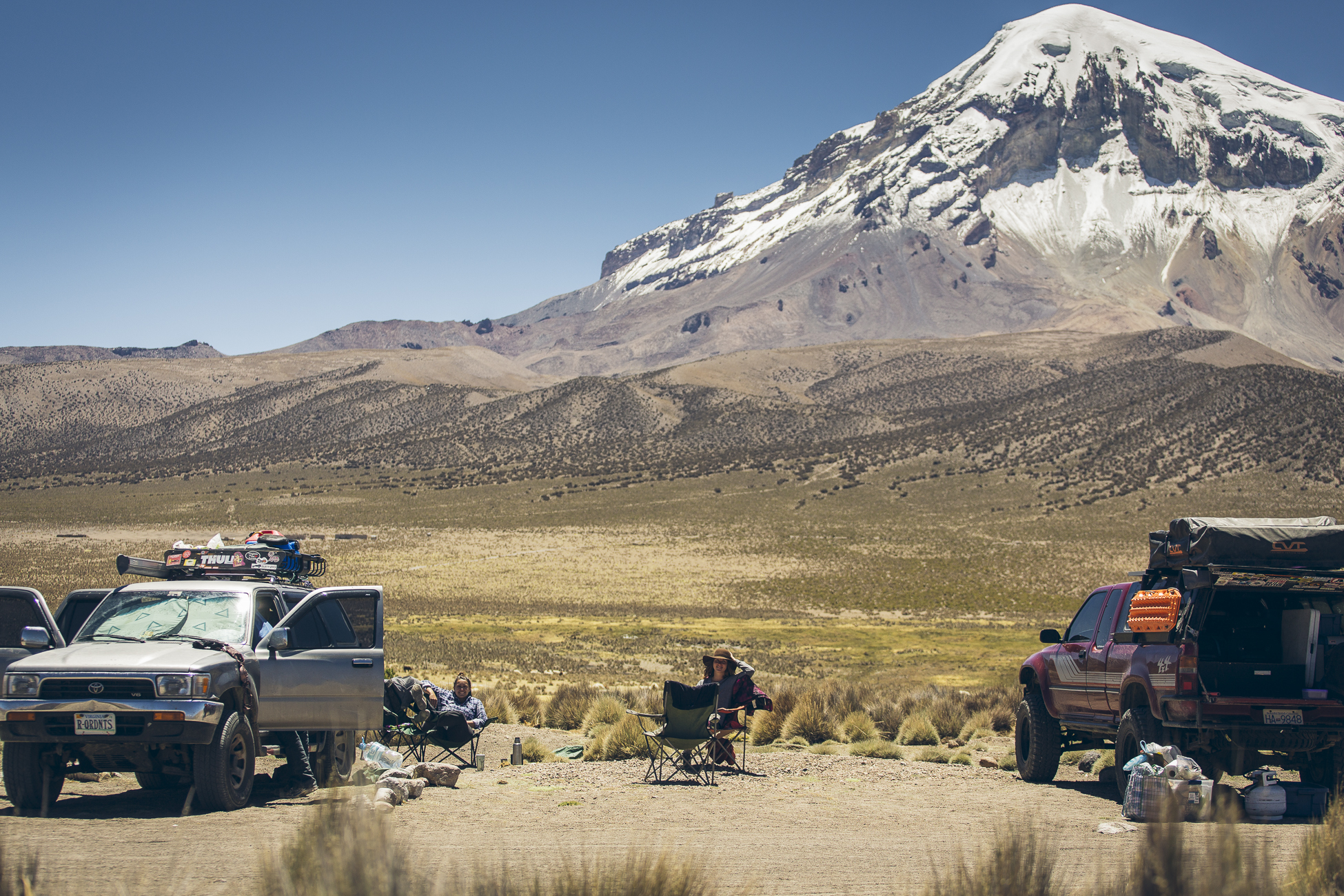 Well, it could get worse.  We started up the trucks to leave and the 4Runner turned over, but wouldn’t fire.  Chris turned to the key to “On” while Richard listened for the fuel pump.  Nope, nada, zilch, zero.

At least we knew the engine wasn’t getting any fuel because the fuel pump wasn’t working.  Richard and Chris quickly popped out the relevant fuses and didn’t see anything wrong.  Chris assumed it was a hastily installed hidden kill switch that was causing the problem.  Eliminating the switch changed nothing.  Hot wiring the fuel pump was our next choice since AAA apparently doesn’t cover Bolivia.  At least we’d be able to see if the fuel pump was the only problem.  Bam!  The 4Runner fired up like it was 1993.

We didn’t know the cause, but at least the symptom was fixed.  A permanent-temporary solution was in place so we could continue and make tracks yet again. 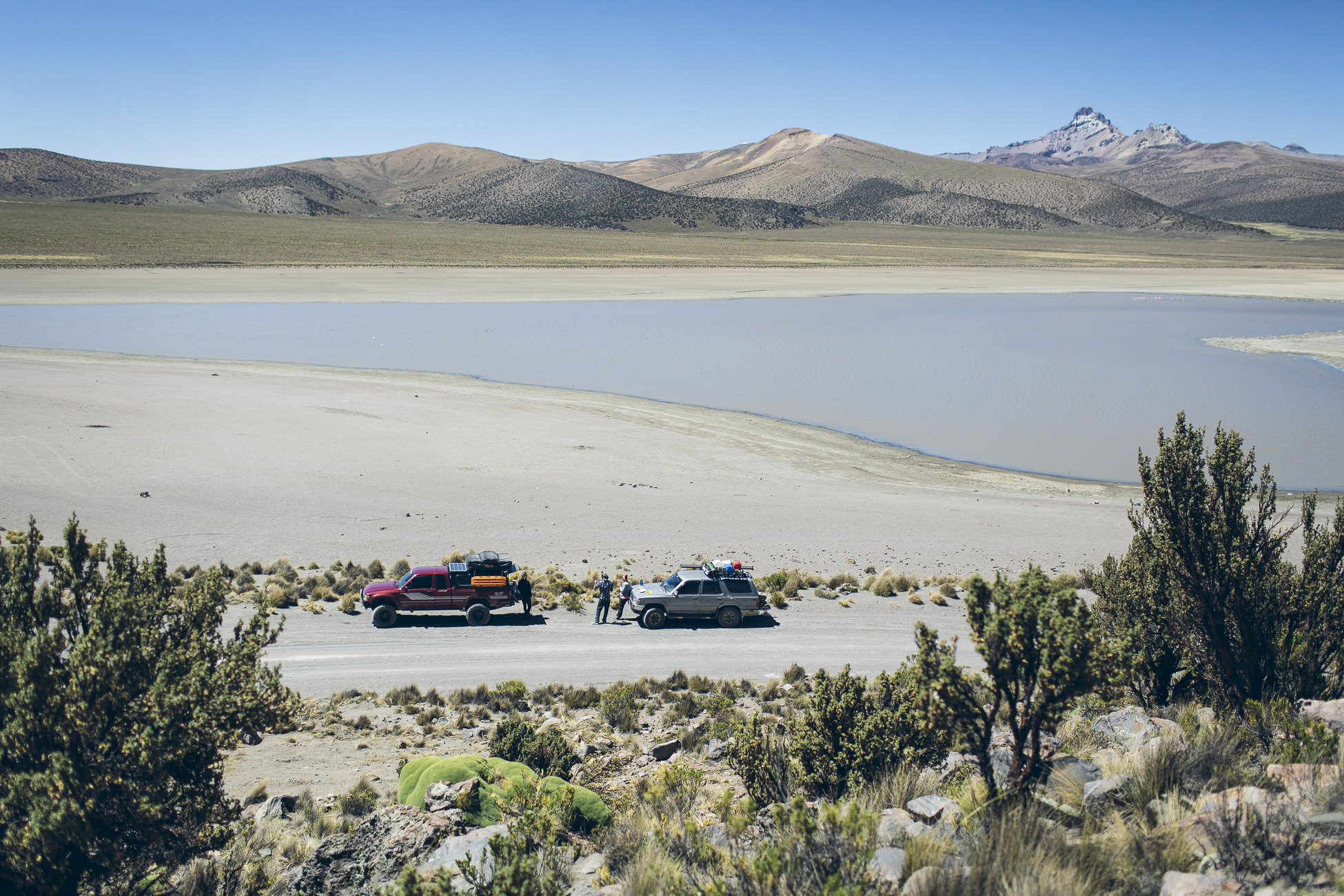 What do you do when you have the choice to take the perfectly good new road with a bridge, or the old road with a water crossing?  We drove Red across first to test the waters and gave Chris a shrug when he asked if it was too deep for his stock 4Runner.  Chris turned his truck into amphibious vehicle while Ashley looked on, concerned from the shore.  Necessary?  No.  Fun AND captured on film?  Yes. 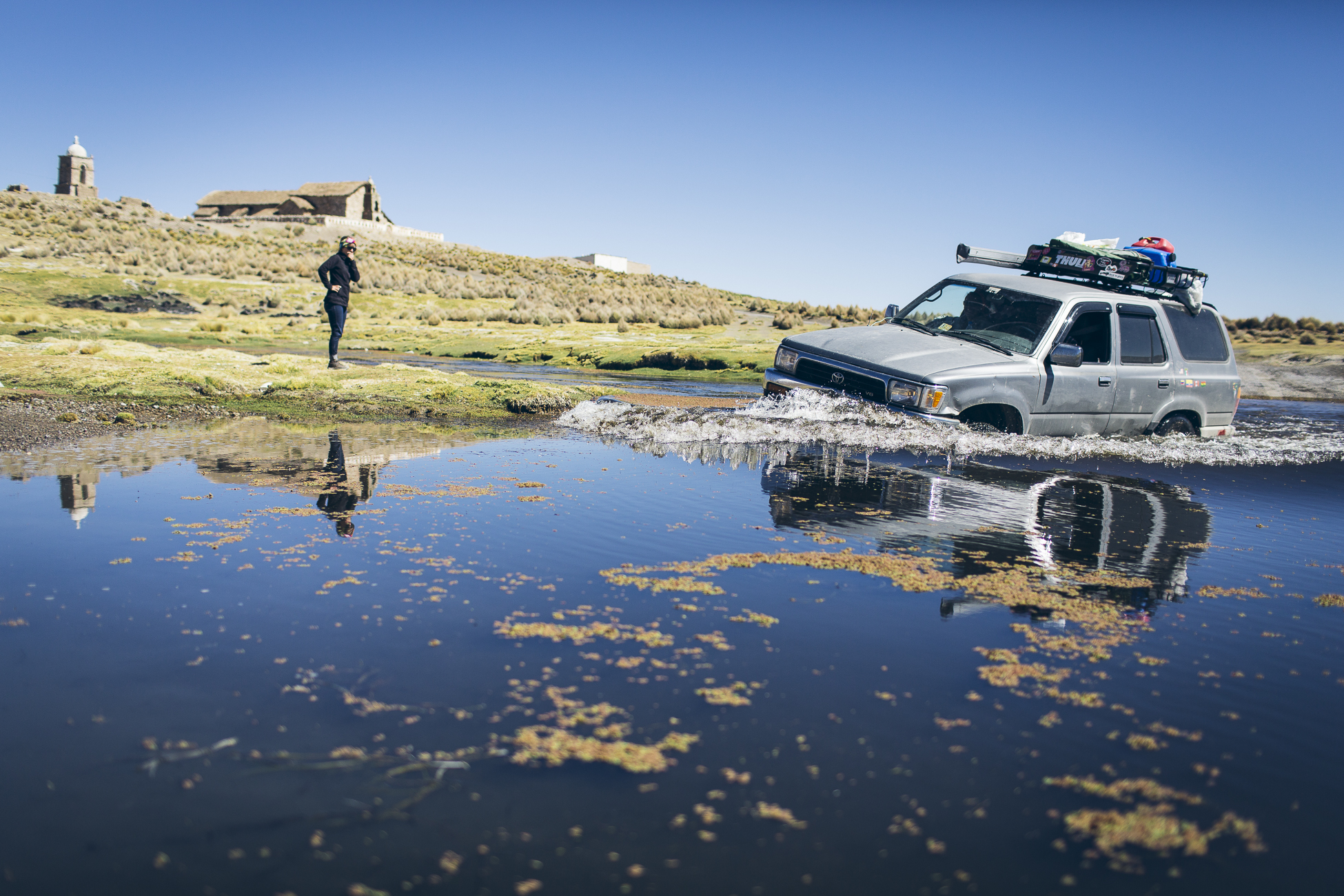 There was thermal activity all throughout the park.  These bubbling pools and geysers looked super inviting to jump into… until we remembered that they were bubbling because they were BOILING!  We carefully stepped away from the geysers, drove up the hill, and set up camp.  Once again we had a spectacular view of Volcan Sajama in the distance. 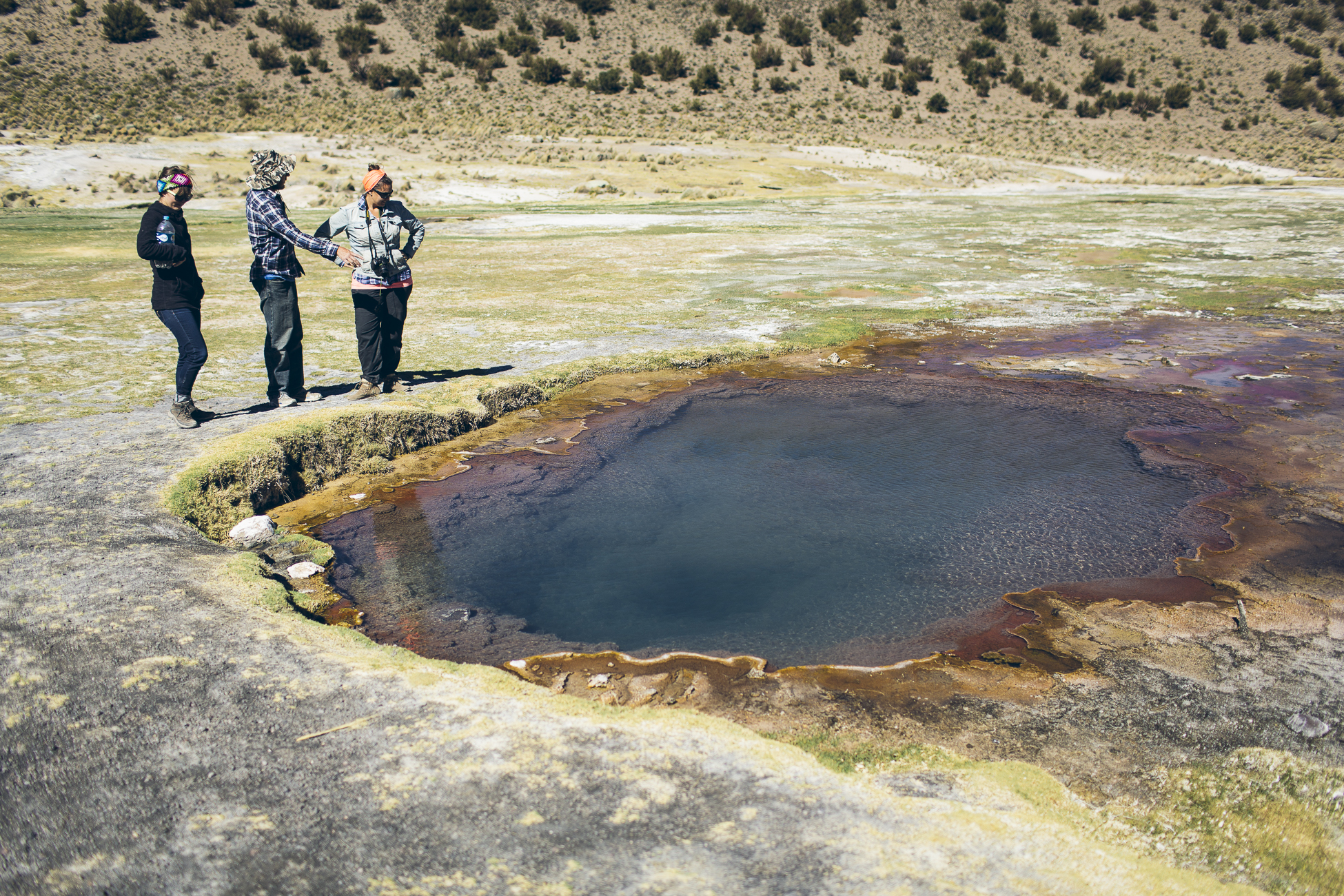 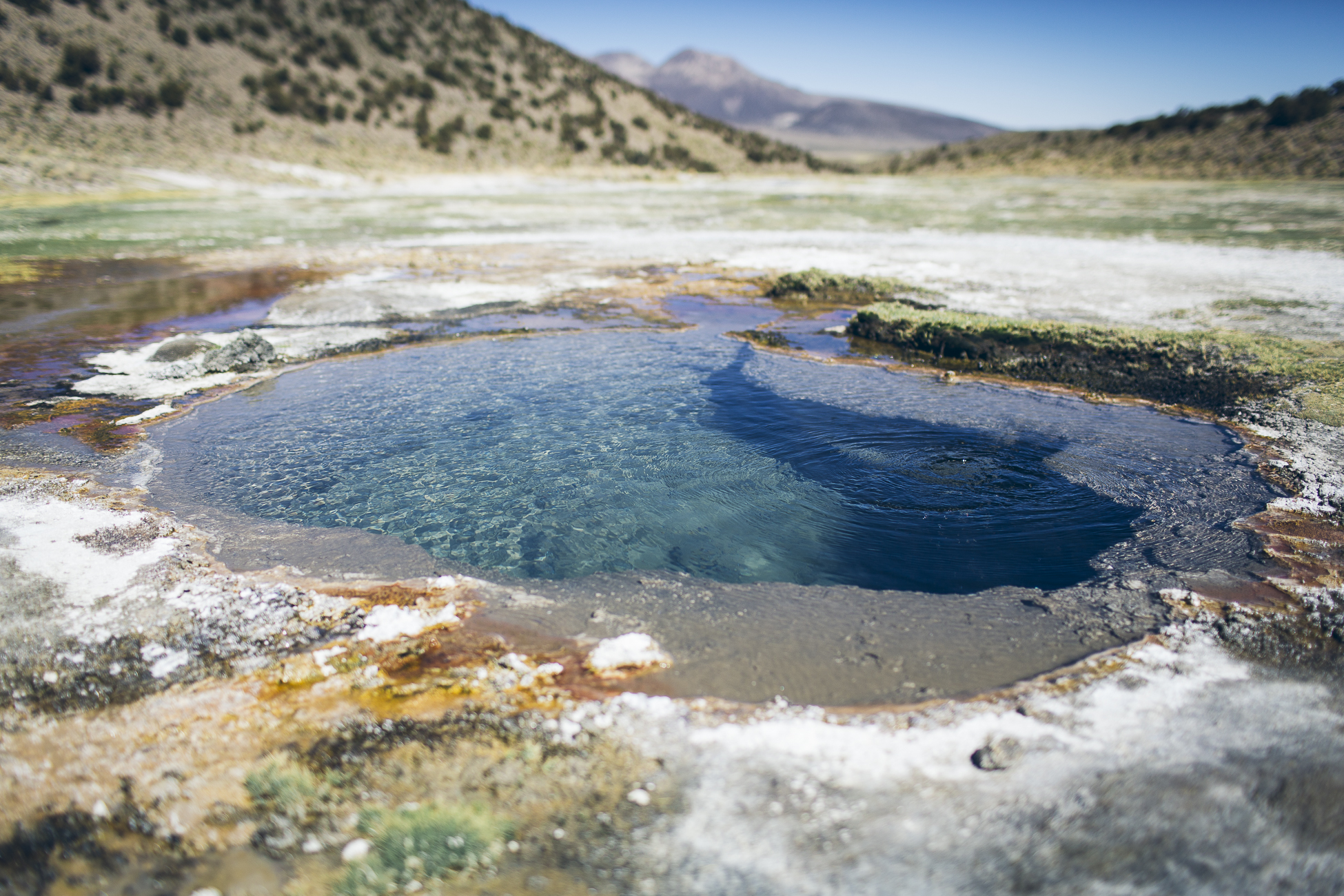 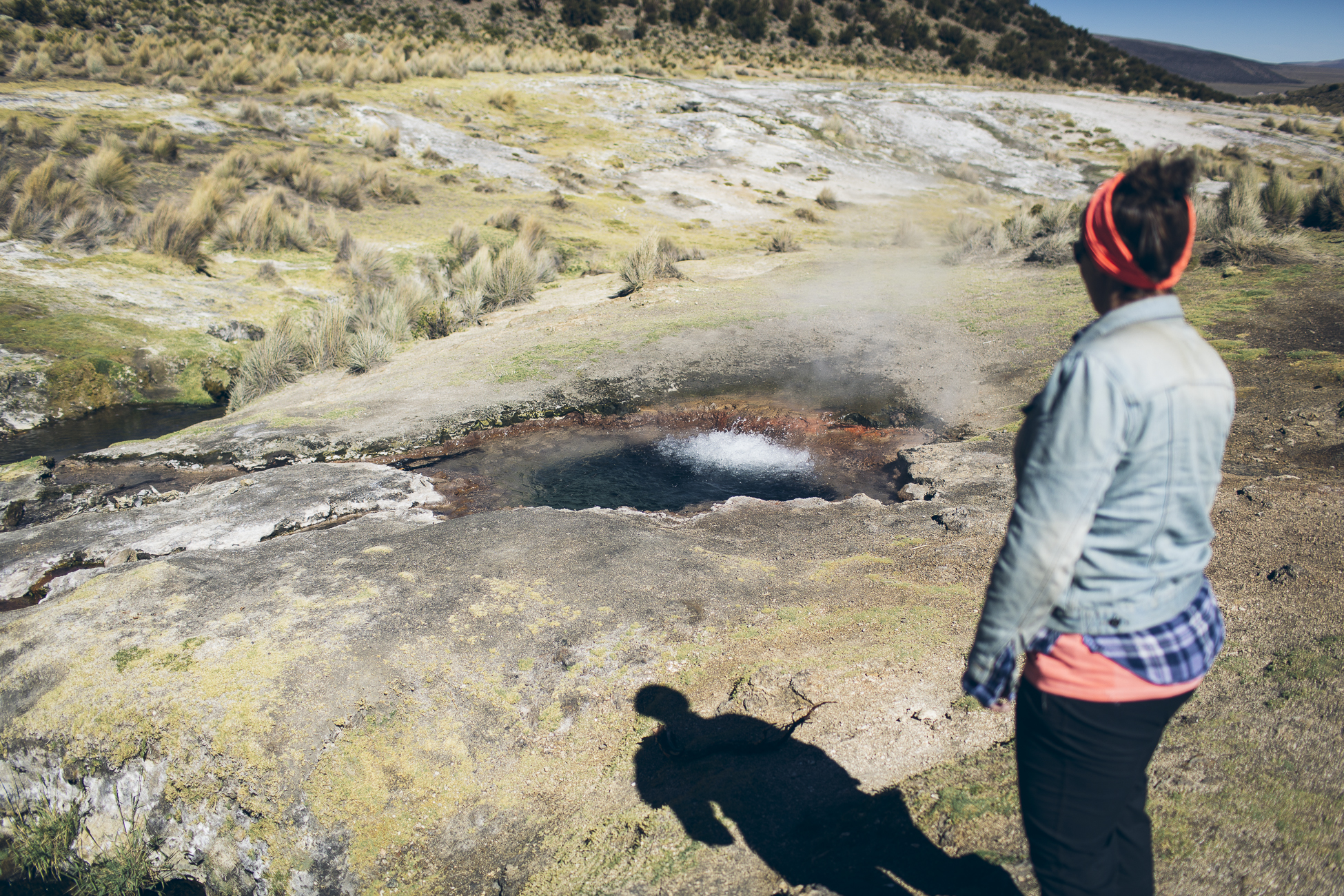 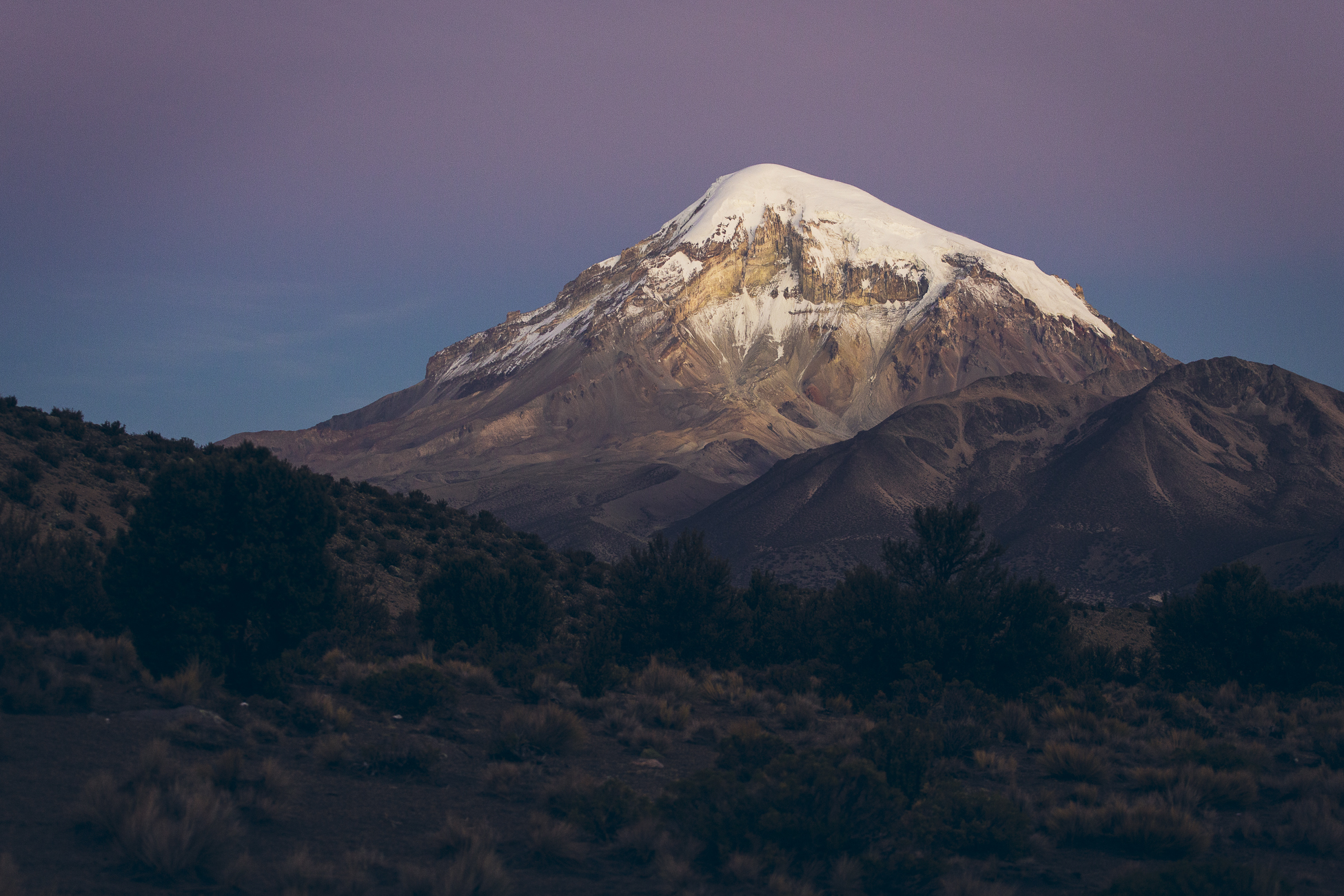 Before leaving the park, Richard and Chris continued troubleshooting the ailing 4Runner.  They checked the associated relays, connections, etc to no avail.  The hot-wired fuel pump solution would have to do for now.

Hours later we made it to a small town with an electro-mechanic in a small corner shop.  He listened to the symptoms, used his 12V test light to confirm, and replaced the faulty ignition fuse within 45 seconds.  Yup,  remember when the boys checked those fuses earlier?  This one looked fine at first, but a very slight discoloration showed that indeed, it was blown. The 4Runner started up right away and we all looked at each other, laughing. 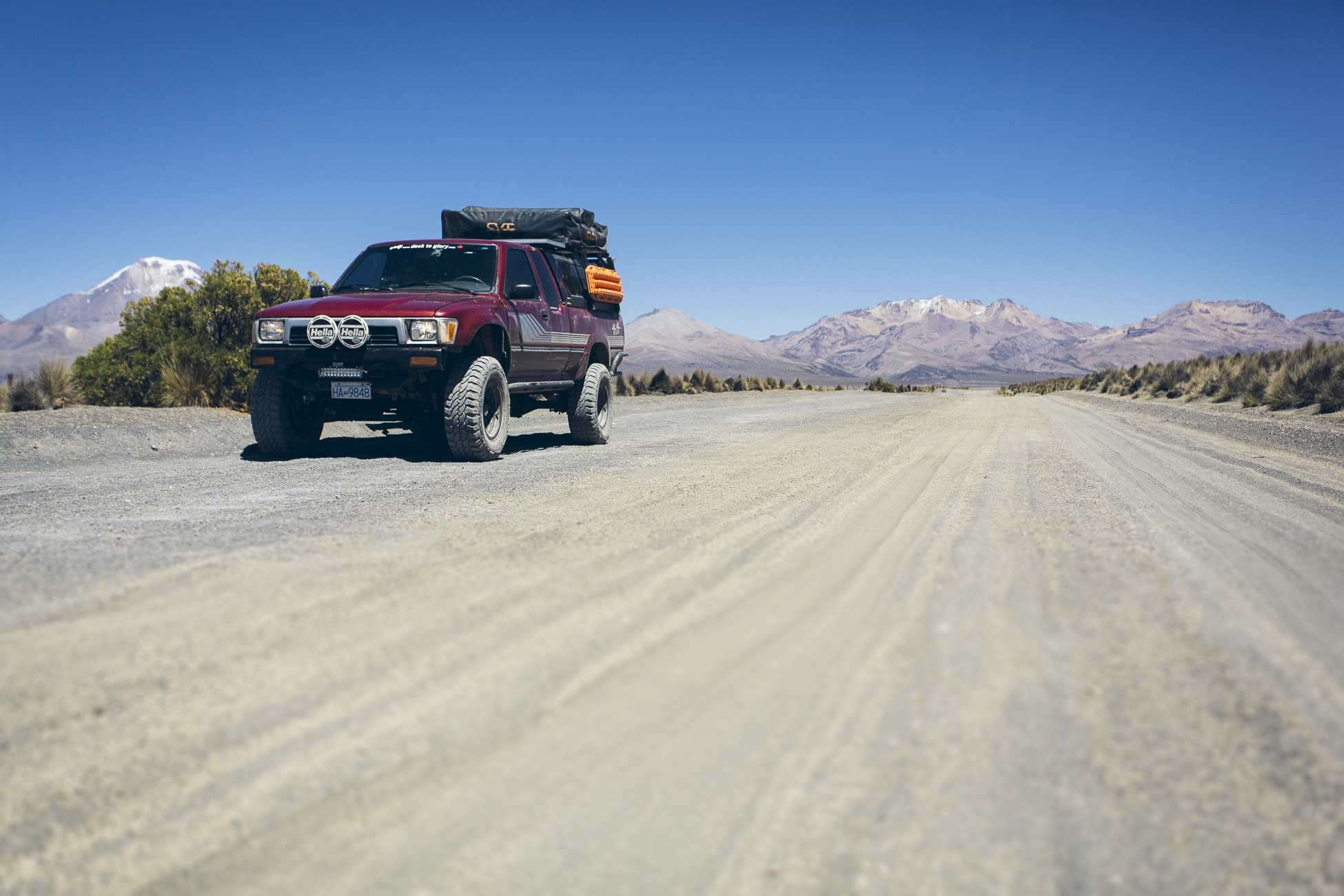 Tall funerary towers called chullpas speckled the landscape on our way into and out of the park.  These shrines are believed to have been placed in visible areas to ensure remembrance of dead Aymara family nobles.  These indigenous pre-Inca people lived in the altiplano and Andes of Peru and Bolivia.  The tombs have long since been abandoned, but we popped our heads inside to take a look anyway. 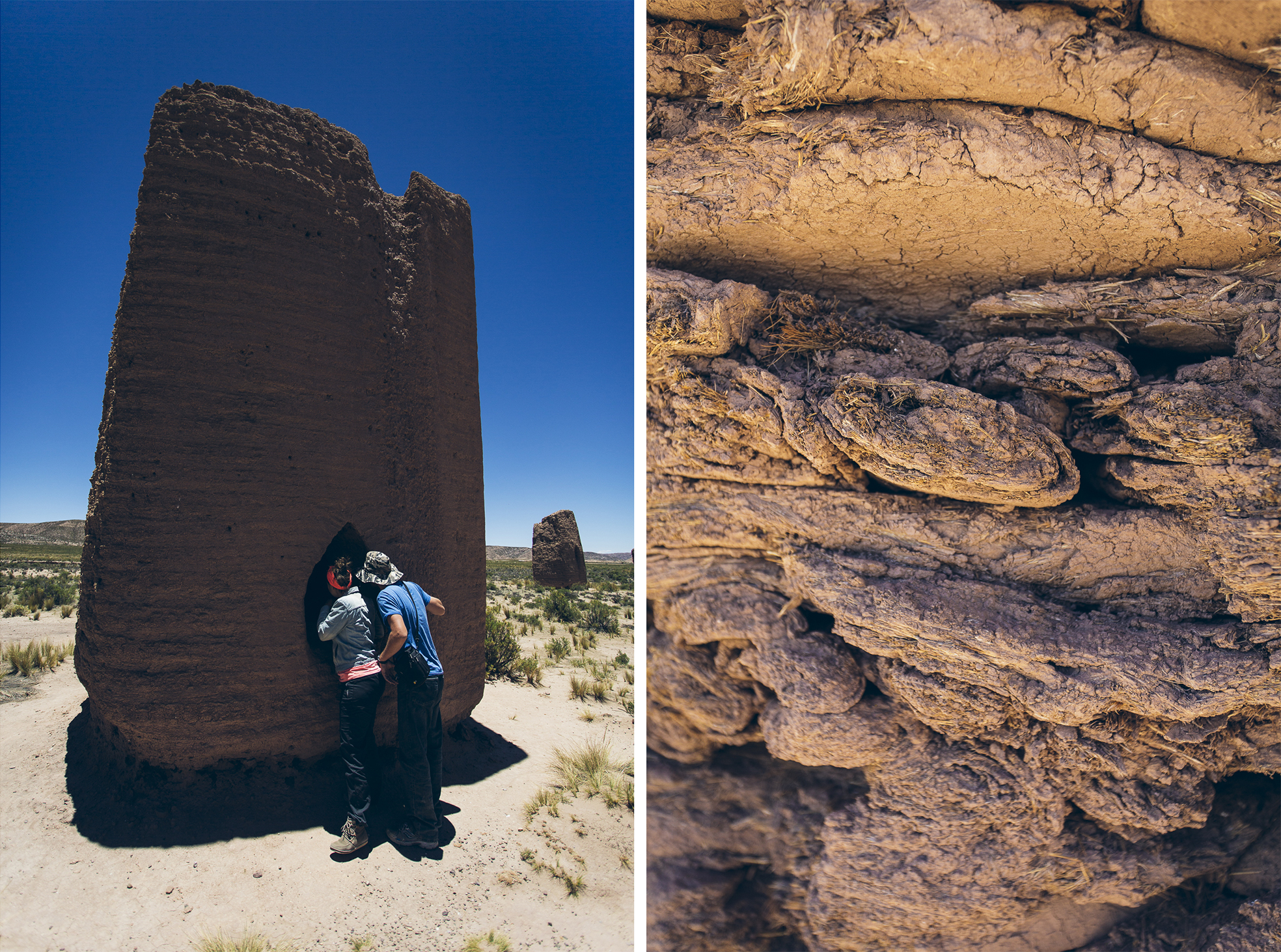 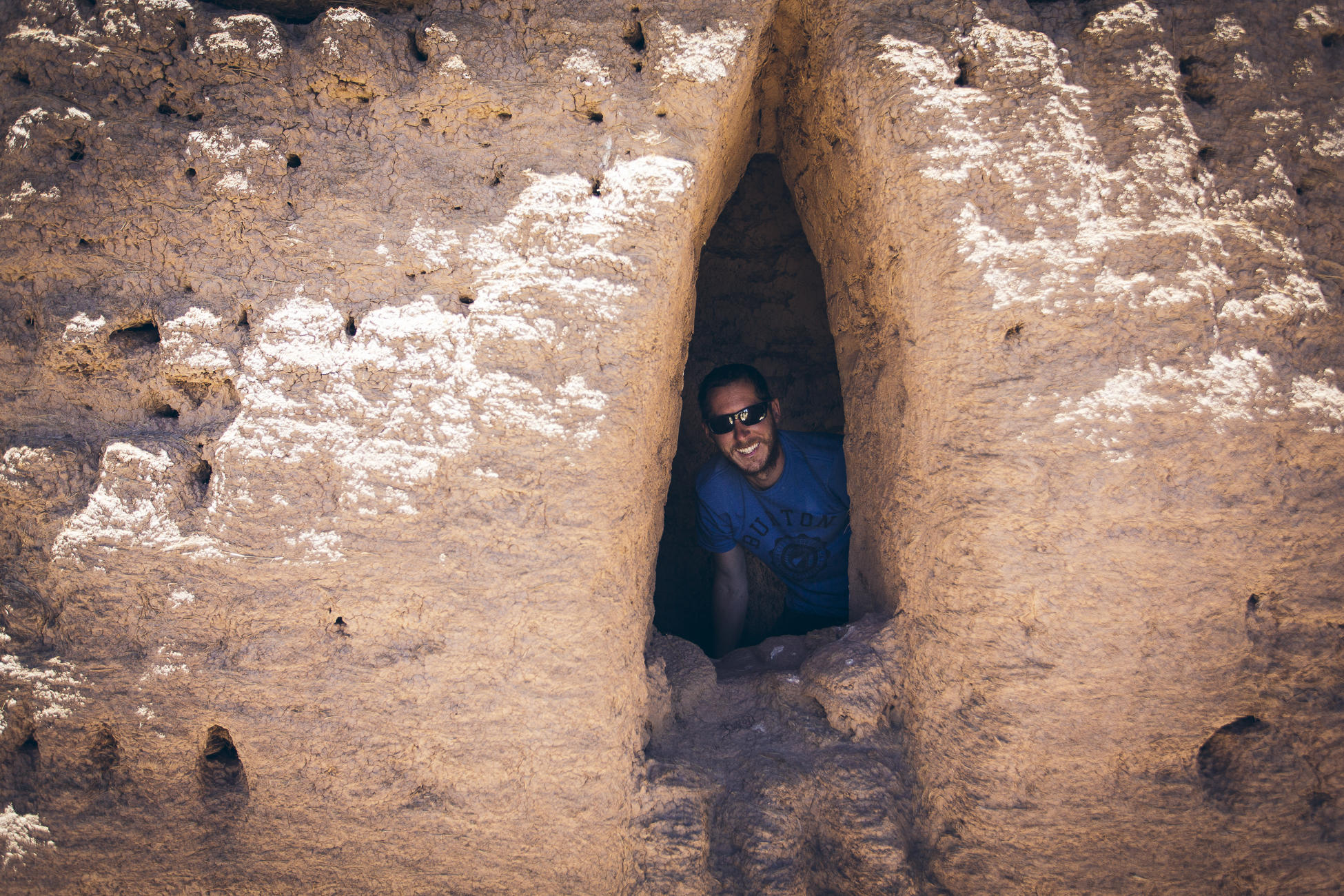 Our achey bones were rejuvenated by the hot springs, the deep-purple sunset quota had been filled, and Lola the 4Runner was healed.  We had a date with George and Jenine for a week-long convoy through the Salar de Uyuni and the Lagunas Route so we let the llamas lead the way. 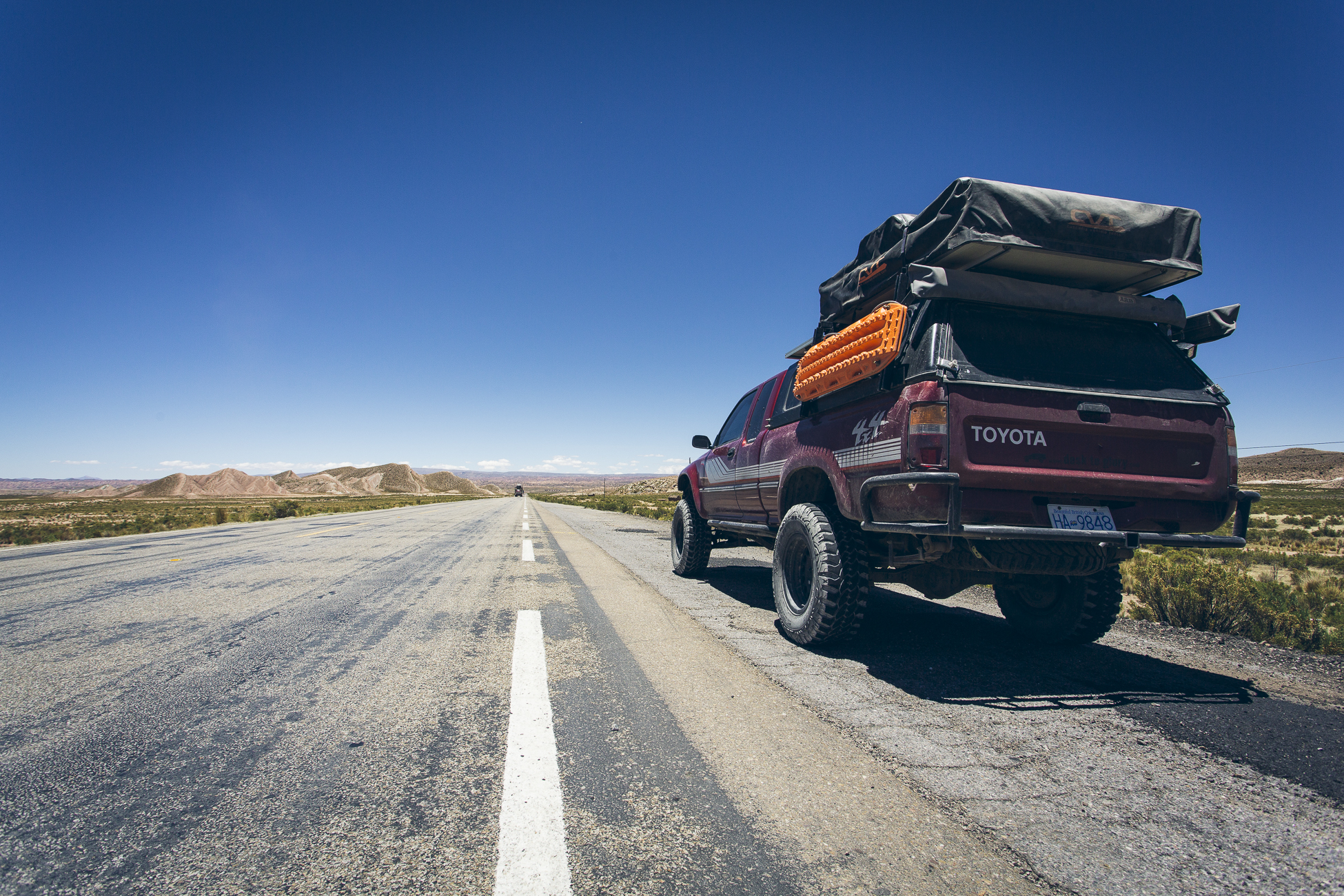 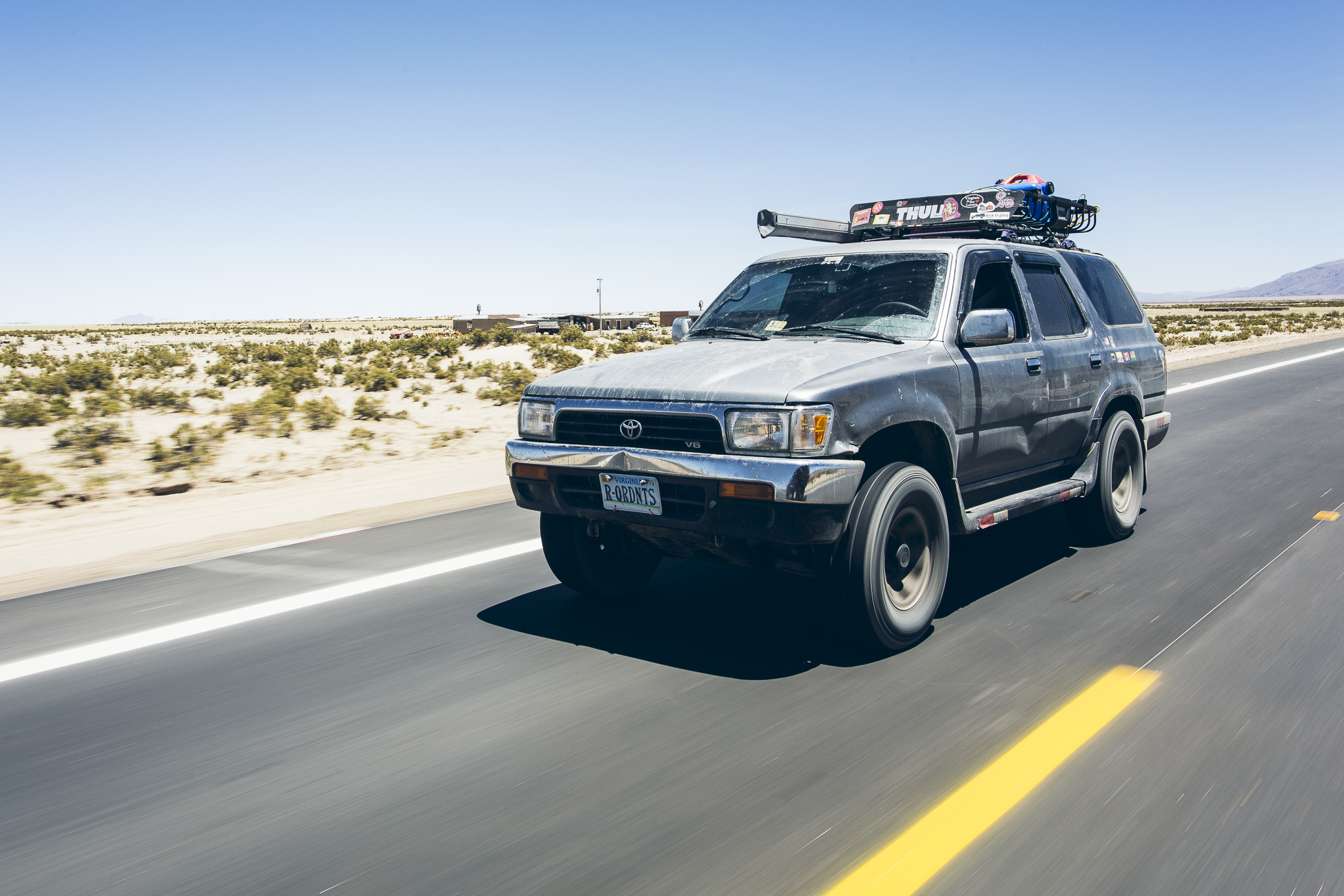 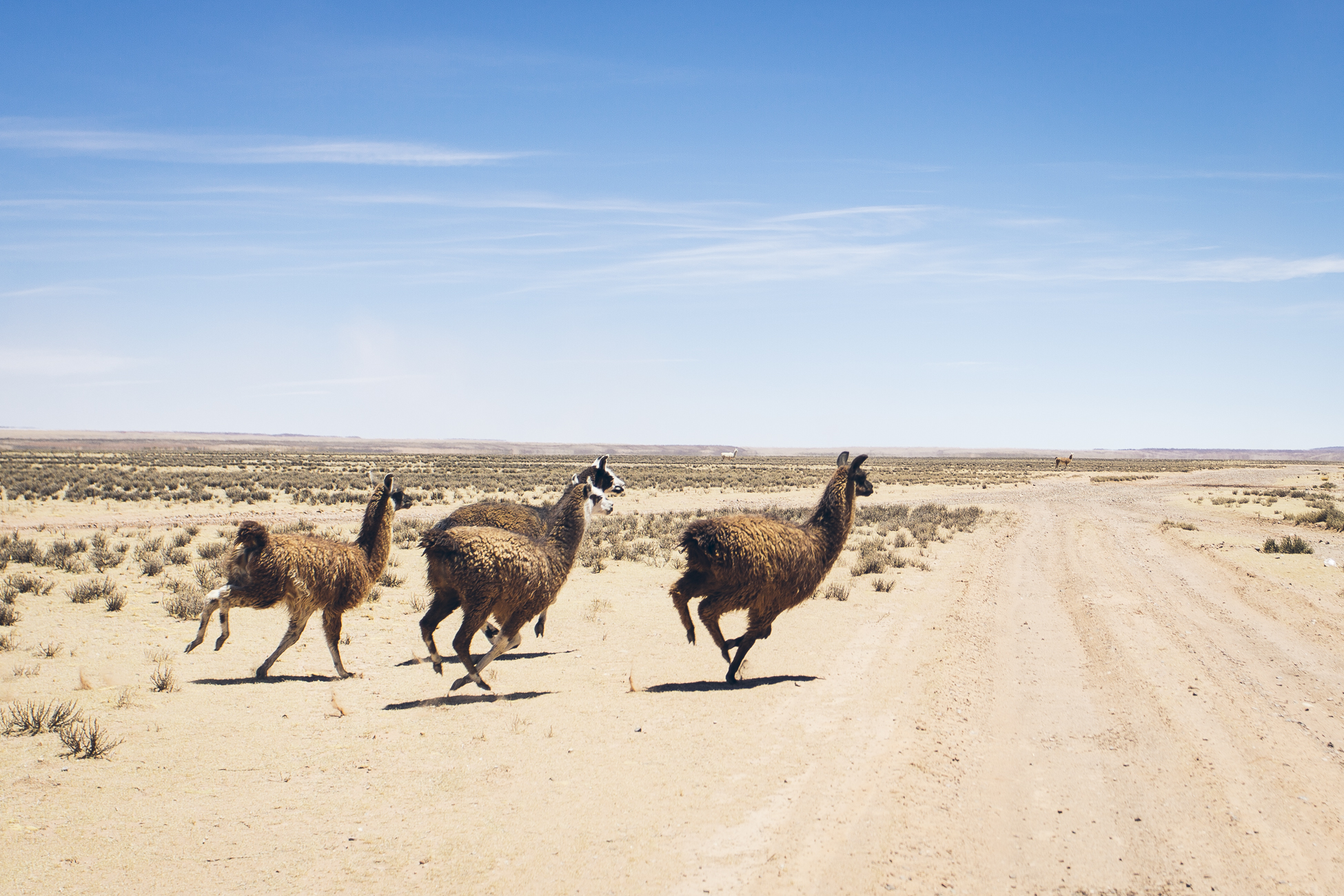